Prediction of the significance in the improvement of depression symptoms of amisulpride in the treatment of schizophrenia: an 8-week case-control study

At present, antipsychotic drug treatment is an effective method widely used in the clinical symptom control of schizophrenia, which significantly improves the remission rate of psychiatric symptoms and the discharge rate of patients (1). Drug treatment should be systematic and standardized, emphasizing early, adequate, and a full course of treatment, and paying attention to the principle of single drug use and individualized drug administration (2). Aminosulpiride is a benzamide used to treat acute or chronic schizophrenia with positive symptoms (such as delirium, hallucination, and cognitive impairment) and/or negative symptoms (such as delayed response, emotional apathy, and social withdrawal), as well as schizophrenia characterized by negative symptoms (3). Many studies have examined the efficacy and safety of amisulpride in the treatment of schizophrenia. However, for chronic schizophrenia, managing patients’ mental symptoms through drug administration is a long process. During treatment, the drug efficacy should also be evaluated and actively predicted, so that the medication could be adjusted in timely fashion to ensure effective treatment (4). Some researchers believe that early improvement of depression symptoms in patients has a certain predictive effect on the recovery of symptoms after drug treatment for schizophrenia (5). To further validate this view and to explore the predictors of amisulpride in the treatment of schizophrenia, the following study was conducted.

We present the following article in accordance with the STROBE reporting checklist (available at http://dx.doi.org/10.21037/apm-20-1702).

The study subjects included383 patients with schizophrenia who were admitted to 15 hospitals in Fujian, Zhejiang, and other places from July 1, 2018 to March 31, 2019. The inclusion criteria were the following: patients with chronic schizophrenia clinically diagnosed according to The Diagnostic and Statistical Manual of Mental Disorders-V, DSM-V (6) and patients who had volunteered for antipsychotic treatment but had not yet met the criteria for symptom relief. The exclusion criteria were the following: patients with severe hepatic and renal insufficiency, patients with severe allergic reactions and side effects treated with amisulpride, patients who failed to complete 8 weeks of drug treatment as required, follow-up dropouts, and cases with invalid research data. All procedures performed in this study involving human participants were in accordance with the Declaration of Helsinki (as revised in 2013). The project was approved by the Medical Ethics Committee, and the informed consent was given by the enrolled patients and their families.

All subjects were administered amisulpride tablets (Paco, Qilu Pharmaceutical Co., Ltd; approval no: SFDA approval no. H20113231; specification: 0.2 g*20 s) with a dose strategy of 200–1,200 mg/d for 8 weeks. The dose was adjusted according to the patient’s condition. If the daily dose of patients was less than or equal to 400 mg, the whole dose was taken once per day; if the daily dose exceeded 400 mg, it was taken in the morning and evening separately with an interval of least 8 h. In all cases, the maintenance dose was adjusted to the minimum effective dose based on the patient’s condition.

Efficacy analysis of amisulpride in the treatment of schizophrenia

Figure 2 Remission vs. non-remission cases of amisulpride-treated schizophrenia patients in terms of criteria A and B.

Comparison of data obtained from patients meeting criteria A and B 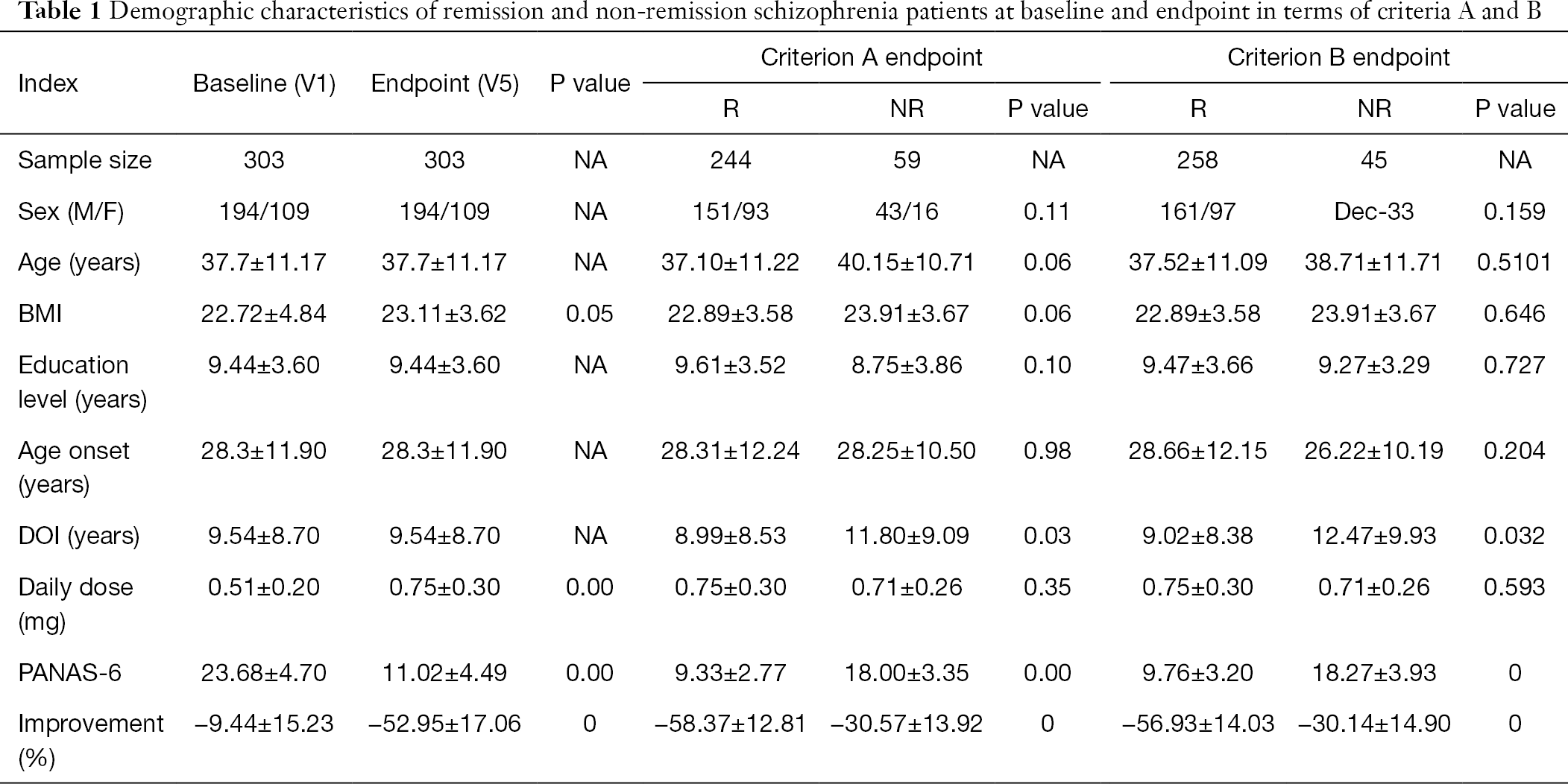 Analysis of predictors for remission of schizophrenia symptoms

Logistic regression analysis showed that, according to criterion A, the improvement of depression symptoms could not be used as a predictor for symptom relief in the treatment of schizophrenia with amisulpride (B=−0.01, P=0.07);according to criteria B, the improvement of depression symptoms did not predict the remission of schizophrenia symptoms, while the patient’s age could be used as a predictor for the remission of schizophrenia symptoms treated with amisulpride (B=−0.08, P=0.03). Each additional year of age, after other variables were controlled, was associated with a 7% reduction in symptom relief rate in schizophrenics. The results are shown in Tables 4,5.

Schizophrenia is a group of major mental diseases with unknown etiology, most of which have slow or sub acute onset in young adults (10). The prevalence rate of this disease is high, up to 6.55‰ according to domestic surveys in China, accounting for about half of the lifetime prevalence rate (13.70‰) of mental disorders except neuropathy. The disease not only seriously damages the patient’s mental and physical health, but also incurs a heavy burden on the patient’s family and surrounding society. This study was aimed to explore whether the improvement of depression symptoms is a predictive factor for the amelioration of the schizophrenia symptoms by amisulpride treatment. A total of 383 patients with schizophrenia were included in the study. These subjects were treated with amisulpride tablets with a dose strategy of 200–1,200 mg/d for 8 weeks. PANAS was used as the criteria to evaluate the treatment effect. The improvement of depression symptoms was compared between the remission group and the non-remission group. Logistic regression analysis was used to investigate predictors of symptom relief in schizophrenia patients treated with amisulpride.

There are some limitations in this study, firstly the number size enrolled is small, secondly, long-time follow-up is lacking. All these may cause the statistical bias of this study. In conclusion, amisulpride has a remarkable effect on the treatment of schizophrenia and depression symptoms. The improvement of depression symptoms had no significant predictive value on the remission of schizophrenic symptoms.

Reporting Checklist: The authors have completed the STROBE reporting checklist. Available at http://dx.doi.org/10.21037/apm-20-1702

Conflicts of Interest: All authors have completed the ICMJE uniform disclosure form (available at http://dx.doi.org/10.21037/apm-20-1702). The authors have no conflicts of interest to declare.

Ethical Statement: The authors are accountable for all aspects of the work in ensuring that questions related to the accuracy or integrity of any part of the work are appropriately investigated and resolved. All procedures performed in this study involving human participants were in accordance with the Declaration of Helsinki (as revised in 2013). The project was approved by the Medical Ethics Committee, and the informed consent was given by the enrolled patients and their families.