Manion et al. reported recently effective neuropathic pain reduction after transplantation of previously differentiated GABAergic cells derived from human iPS into the spinal cord of mice submitted to sciatic nerve injury. The authors provided immunohistochemical evidence of GABAergic differentiation in vitro, proteomics data proving GABA synthesis, and packaging and release machinery transcribed into the cultured cells (GAD65, VGAT, and others). Moreover, the differentiated cells responded to glutamate and potassium chloride with calcium transients (visualized by calcium imaging), and released GABA, as measured by ELISA. Additionally, NOD mice were submitted to sciatic nerve injury, and one week later, after neuropathic pain had been established, the animals received implants of matured cells into the dorsal horn. As early as two weeks after transplantation, the authors observed reduced mechanical allodynia induced by the lesion, as measured by von Frey filaments, but no improvement of cold allodynia (measured with the acetone test). The tactile response lasted for the whole observation period of two months. Notably, no motor or vegetative improvement (bladder emptying) was observed. Moreover, GABAergic cell implants in naïve mice, or implants of so-called “sensory neurons” into lesioned mice failed to induce significant changes in pain perception. Immunohistochemical analyses performed three and 10 weeks after the implants demonstrated co-localization of GABA-markers and human specific cytoplasmic antibody, or staining of neuronal markers with human specific antibodies, initially restricted to the dorsal horn, and later throughout the spinal cord. The authors present evidence of mouse pre-synaptic densities in apposition to human-GABAergic neurons and interpret this as evidence of the presence of synapses between transplants and hosts. Notably, they did not observe any kind of tumor formation.

The article summarized above represents important evidence supporting the vast use of cell therapies for neurological conditions. The scientific community has paved a very consistent path since the first scientific report in the modern era showing results of graft survival into the host brain (1). Several reports followed the revolutionary idea of Dr. Thompson (2,3), but the enthusiasm was replaced by disappointment as the scientific community was confronted with one important limitation: mature brain tissue did not survive more than a couple of minutes without oxygen, and even if it did, it did not integrate into the host tissue. After some minutes without oxygen, neuronal membranes become unstable, which leads to a massive influx of calcium, followed by the well-known mechanisms of cell death (4). Due to insurmountable obstacles in the pioneer era of cell transplantation, this issue fell into oblivion for decades. A drop of hope came with the observations of Bjorklund and Perlow in 1979 (5-7), who described the survival of immature brain tissue in the host brain. Indeed, immature cells have lower oxygen metabolism, and thus can be maintained in culture medium under appropriate conditions. The small and even absent neuritic branches allow for cell manipulation without rupture or calcium influx, which favors integration into the host tissue. Further advances in cell culture and microtransplantation techniques permitted survival and integration of isolated neural stem cells into the host brain, instead of fetal tissue grafts (8). Interestingly, Manion et al. went against this paradigm by transplanting mature cells. Mature cells have long neuritic and axonal branches with complex synaptic interactions with neighboring cells, which makes it difficult for them to detach and implant into another host structure. One hypothesis that remains open is that immature cells present in the culture at the moment of transplantation were in fact responsible for the results obtained. In fact, the authors report the presence of Ki67-positively stained cells at the time of transplantation. In order to overcome this obstacle, the cultures could have been submitted to previous irradiation, or even chemotherapeutic treatment with AraC or another similar agent prior to transplantation.

Nevertheless, the article is in line with other scientific observations of improved neuropathic pain of peripheral (sciatic nerve injury) or central aetiology (spinal cord injury) by transplanting GABAergic precursors directly into the spinal cord (9,10). Taken together, these observations support the notion that external inhibitory cells implanted into the dorsal horn can restore the balance between physiological sensory excitation and abnormal pain signaling in the sensory system. Historically, more efficient results have been obtained in cell transplantation for brain restoration when the graft acts locally in the target neural structure, as opposed to grafting at local sites, where the biological effect is ultimately dependent upon “re-wiring” over long distances. In fact, Gage showed that implanted cells grew 1–3 mm axons in the host brain (11). Since then, the notion prevailed that grafts should preferentially be implanted in the target structure in order to restore a damaged pathway. In Parkinson’s disease, dopaminergic precursors are transplanted into the denervated striatum, and not into the degenerated substantia nigra, as initial logic would dictate (12,13). Although this treatment’s efficacy is complicated by the occurrence of graft-induced dyskinesias (14,15), it is undeniable that this transplantation strategy leads to dopaminergic innervation (16). Likewise, the biological results of similar strategies, such as spinal cord implants to treat pain, seem to be more consistent than treatments that depend on complex re-wiring, such as those for Alzheimer’s (17) or Huntington’s disease (18,19). Understanding these historical milestones is crucial for further developments in cell-based therapies for neurological conditions. From my perspective, restorative strategies based on local effects tend to be more effective than those based on long-distance effects.

Beyond the discussion of diseases that would benefit the most from cell transplants, the scientific community is engaged in a frenetic search for the ideal cell type, one that is easy to obtain and expand, will differentiate into various neuronal phenotypes, and is largely safe (no oncogenic or infectious effect). It is unquestionable that fetal cells are safe for transplantation purposes. Additionally, the results observed in certain conditions are interesting and promising (20-23), although there is room for improvement (24,25). On the other hand, their limited availability restricts their use on a large scale. It is also widely accepted that other cell types like embryonic stem cells (derived from the internal layer of blastocysts), or induced pluripotent stem cells (genetically engineered from mature somatic tissue), have significant higher trans-differentiation potential and expansion capacity, at the (very high) cost of oncogenicity, at least in their immature state. The question that arises is whether multipotentiality can occur with low oncogenicity. I am particularly skeptic about this. The genetic re-programming necessary for the cells to travel back to their immature states uses essentially the same machinery that makes them grow exponentially and further mature into different lineages. Exponential growth uses the energy required to mature. Mature cells are not able to develop the intrinsic properties that render them specialized and, at the same time, grow exponentially. Thus, growth and maturation stand at opposite ends of the delicate cell balance. In fact, recent attempts to remove oncogenes from the transfected genes in iPS formation resulted in lower effectiveness. Perhaps one solution to this dilemma might be to accept some degree of oncologic risk while choosing a not-so-powerful cell type.

The field of neural restoration has seen significant and consistent growth. Thanks to previous work, including vast preclinical evidence, we can now choose better subjects for experimental interventions (not so severe or lightly affected), we know which diseases transplantation is most promising for, and we know how to choose the ideal cell type, and how to transplant it (Figure 1). Considering the recent advances in regulatory affairs related to the use of stem cells for scientific and clinical purposes in many countries, this is the right time to advance with clinical trials… 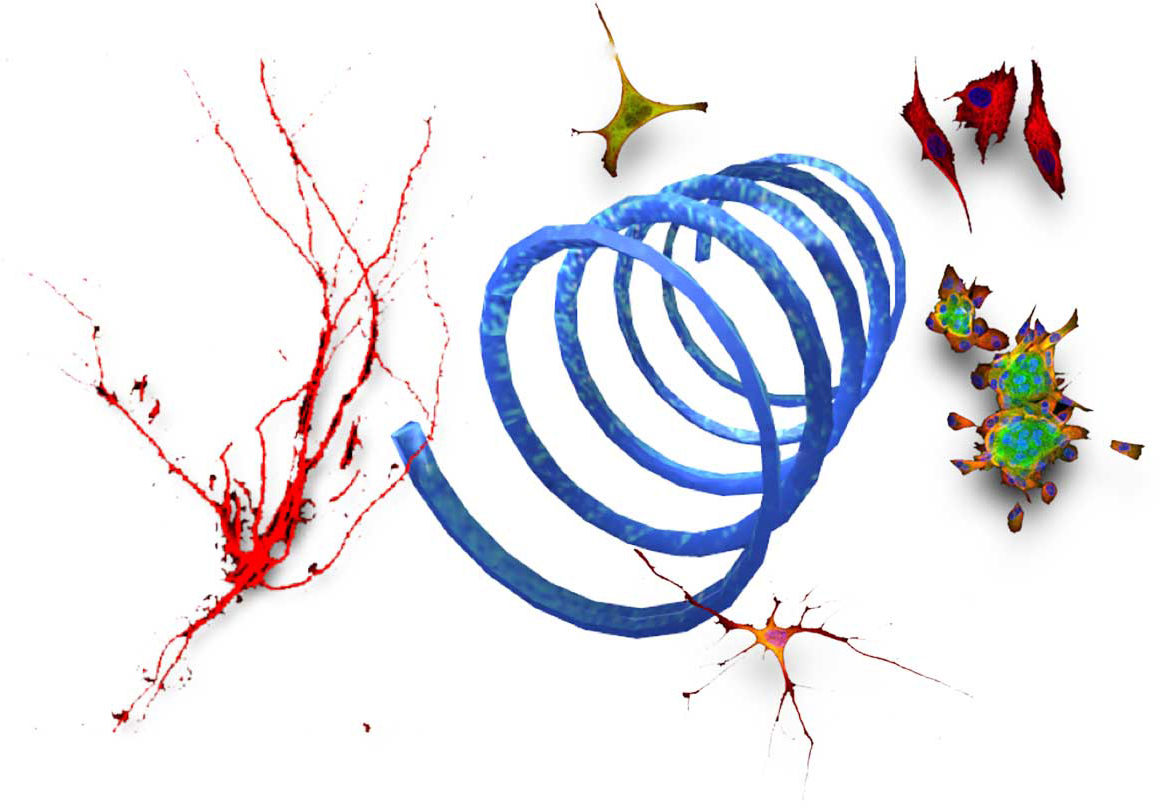 Figure 1 Schematic representation of the differentiation process of stem cells. The spiral represents time evolving from top right to bottom left. Here, primordial human stromal mesenchymal stem cells are stained for vimentin (mouse monoclonal, 1:1,000)—top right. Under expansion medium containing bFGF and EGF (20 ng/mL each), cells start to grow in aggregates known as neurospheres, which are positively stained for Nestin, shown in green (monoclonal, mouse, 1:200, Merck-Millipore, Burlington, MA, USA), and GFAP, shown in green (polyclonal, rabbit, 1:600)—right/bottom. At this stage, very few cytoplasmic branches are seen, and cells are densely packed. Once placed onto a polymer layer (here, poly-ornithine), and deprived from bFGF and EGF, cells start to detach from the spheres and migrate radially, similarly to the physiological process that takes place in the rostral migratory stream and the dentate granular layer in the hippocampus, along radial glia. Concomitantly, neuritic branches start to grow, and cells express voltage-gated ion channels on their surface. At this time, cells are called neuroblasts, and stain positively for beta-III-tubulin, shown in red (polyclonal, rabbit 1:600, Covance, Princeton, NJ, USA) and PSA-NCAM, shown in green (monoclonal, mouse, 1:1,000). As differentiation continues, neuritic branches continue to grow, and cell surface ion channel density increases drastically, allowing the cells to fire small action potentials; at this phase, no burst activity or spontaneous synaptic currents are observed (26). Young neurons like these have very high input resistance, and thus react to small input currents at very low thresholds; their immature synapses are very prone to plastic changes, facilitating their integration into developing neural networks. At this phase they stain for NF-200, shown in red (mouse monoclonal, 1:1,000). Maturation goes on when cells are exposed to BDNF, and cells acquire the capacity to fire trains of action potentials and to build functional synapses with neighboring cells; their branches are long and ramified, with dendritic spines where synapses are anchored. At this time, they continue to express NF200, but also express NeuN, MAP2ab, and other markers of mature neurons (here, an example of MAP2ap positivity is shown in red (mouse monoclonal, 1:1,000, Merck-Millipore, Burlington, MA, USA), red is revealed with AlexaFluor 594, 1:150, green with AlexaFluor 488, 1:150). All antibodies (unless indicated) were obtained from ThermoFisher Scientific (Waltham, MA, USA). Normal differentiation is a continuous process that involves energy saving to develop specialized properties. On the other hand, fast-growing immature cells use all energy sources to synthesize DNA and proteins necessary to divide; they do not have time nor the energy necessary to specialize. Specialization and cell division are opposite properties in cell balance. Neuronal cells are among the most specialized cells in the human body, and re-programming to immature states has not been proven possible so far. At which phase is a developing neuronal cell most able to restore the host neural tissue? Where is the ‘point of no return’ where neuritic branches and synapses are so well developed and specialized that damage during transplantation is irreversible? These questions remain open for further studies.

Ethical Statement: The author is accountable for all aspects of the work in ensuring that questions related to the accuracy or integrity of any part of the work are appropriately investigated and resolved.