Pirarubicin is an anthracycline antibiotic, which plays an anti-tumor role by interfering with the synthesis of tumour cell DNA, and is widely used in the treatment of blood system malignant tumors and solid tumors. Unfortunately, the clinical effectiveness of THP is limited by its dose-related cardiotoxicity (1). Mechanisms by which THP induces cardiac side-effect have been investigated extensively, but a definitive picture has yet to emerge. Oxidative stress and apoptosis have been identified to be involved in THP-induced cardiotoxicity (2). Autophagy is a lysosomal-dependent protein degradation pathway, which plays an important role in doxorubicin-induced cardiomyopathy. Up-regulation of PI3K/AKT/mTOR pathway can inhibit excessive autophagy of cardiomyocytes caused by doxorubicin and reduce myocardial injury (3). However, the mechanism of autophagy in THP-induced cardiotoxicity has not been reported.

Qishen Huanwu capsule (QSHWC) (Ji Yao Zhi Zi Z20050798, batch number 030310) is an in-hospital preparation developed by Cangzhou Hospital of Integrated Traditional Chinese and Western Medicine in Hebei Province. QSHWC is derived from Buyang Huanwu decoction and has the effects of invigorating Qi and nourishing Yin as well as removing blood stasis and eliminating phlegm. It is mainly used to treat stroke and coronary heart disease due to Qi deficiency and blood stasis. Quercetin (4), kaempferol (5), and other components contained in QSHWC have the effect of reducing the cardiotoxicity of anthracyclines. In view of these findings, the present study intended to evaluate whether QSHWC could alleviate pirarubicin (THP)-induced myocardial injury in rats and explore the potential underlying mechanisms. We present the following article in accordance with the ARRIVE reporting checklist (available at http://dx.doi.org/10.21037/apm-20-1746).

The experimental rats received a standard rat diet and had free access to drinking water. The rats were kept in a pathogen-free room with a constant temperature of 25±3 °C and a light/dark cycle of 12/12 h. All the procedures were carried out according to the Guide for the Care and Use of Laboratory Animals published by the U.S. National Institutes of Health and were reviewed and approved by the Ethics Committee of Cangzhou Hospital of Integrated Traditional Chinese and Western Medicine (review batch number: 2019042).

Echocardiographic examination of the rats

Heart tissues were collected from all rats. The tissues were fixed in paraformaldehyde, dehydrated, cleared, infiltrated and embedded in paraffin, cut into 4-µm sections, and routinely stained with HE. The morphology of the myocardial tissue of various groups of rats was examined under an optical microscope.

Statistical analysis was conducted in SPSS 22.0 software. Measurement data are expressed as mean ± standard deviation. Comparison between multiple groups was performed using one-way analysis of variance (ANOVA), while pairwise comparison between the means was carried out using the least significant difference (LSD) t-test. A P value of less than 0.05 indicated that the difference was statistically significant.

The effect of QSHWC on rat heart functions 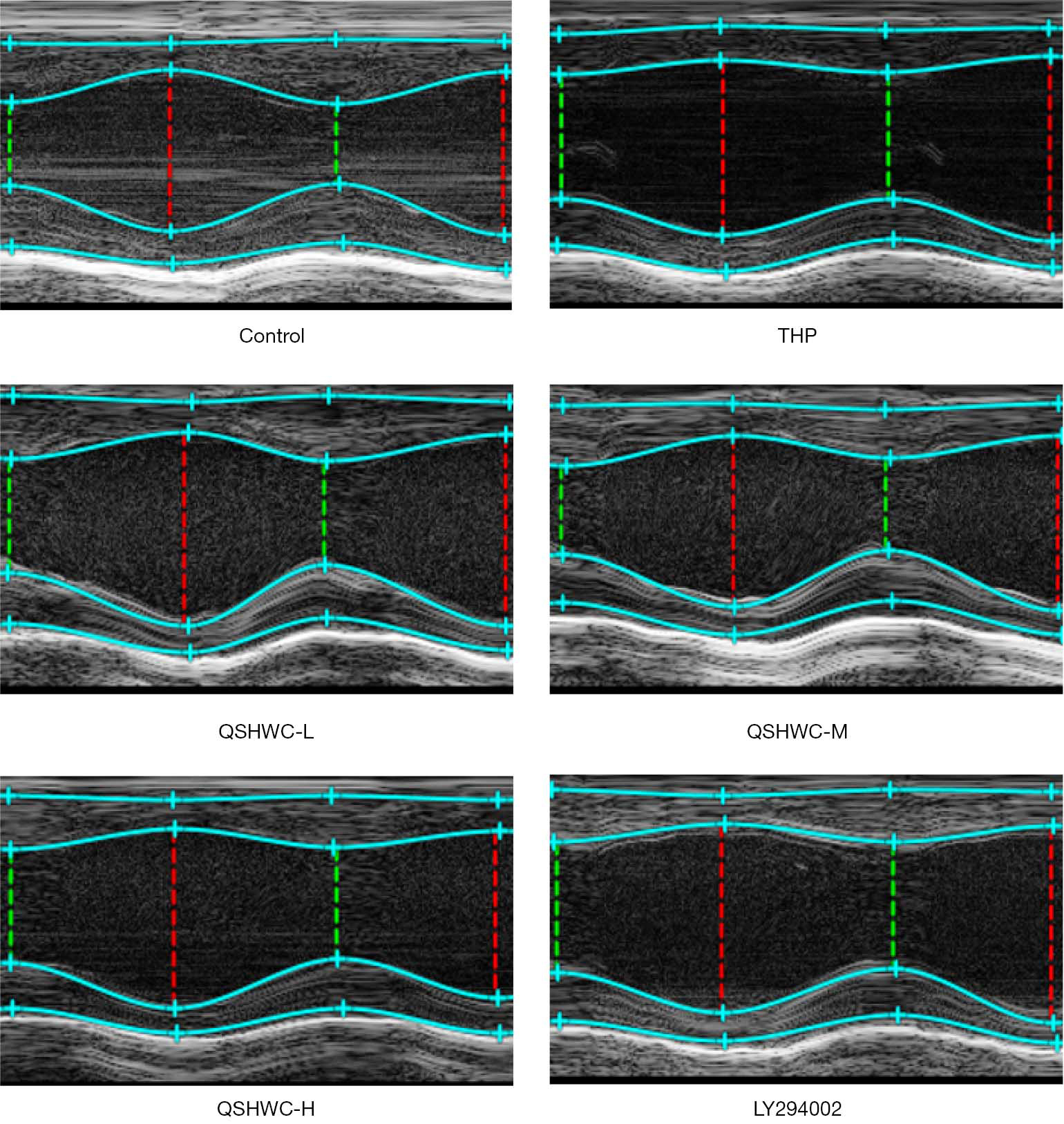 Effect of QSHWC on the morphology of rat myocardial tissue

Distribution of LC3 in myocardial tissue 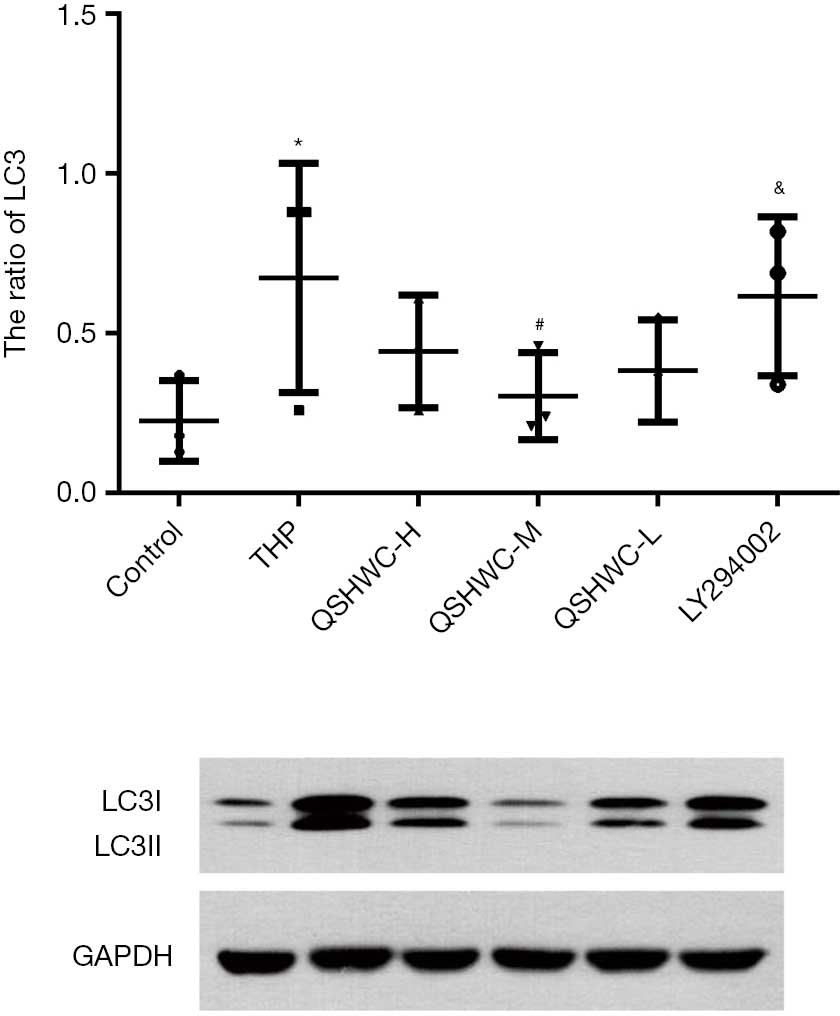 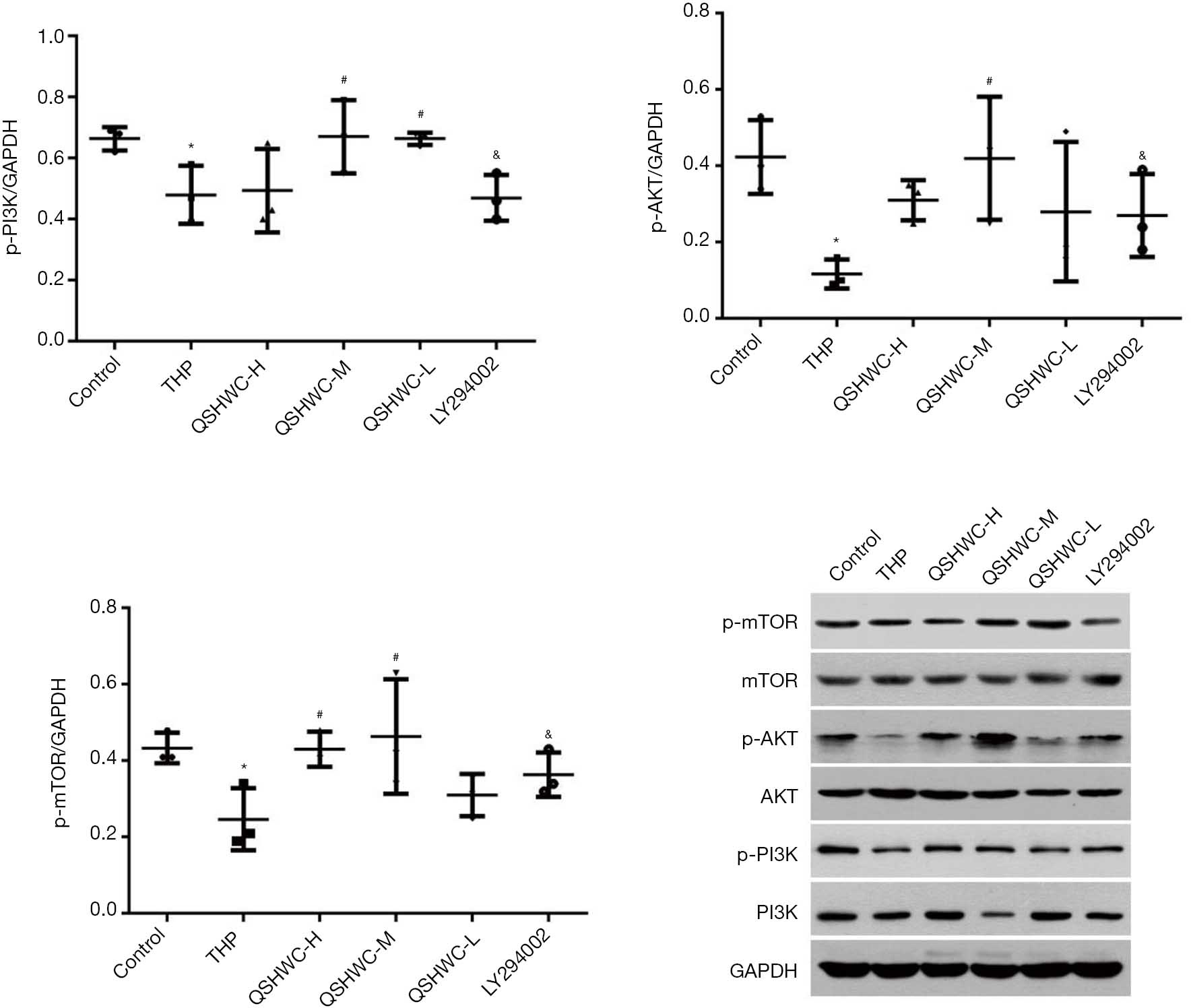 QSHWC is derived from a classic prescription of traditional Chinese medicine, Buyang Huanwu decoction. QSHWC alleviates the pituitrin-induced cardiomyocyte necrosis and myocardial interstitial fibrosis in rats. To explore whether QSHWC improves myocardial damage caused by THP, we subjected various groups of rats to echocardiographic examination and HE staining of myocardial tissue. The results showed that the LVESD, LVEF, and LVFS were all better in the QSHWC-L, QSHWC-M, and QSHWC-L groups compared with the THP group. In addition, in the QSHWC-L, QSHWC-M, and QSHWC-L groups, the structure of cardiomyocytes was relatively normal, the arrangement of myocardial fibers was more regular, and there was less interstitial edema, suggesting that QSHWC alleviated the myocardial damage caused by THP.

LC3 has two forms: LC3-I and LC3-II. When intracellular autophagy occurs, LC3-I protein will be converted into LC3-II. Therefore, the level of LC3-II reflects, to some extent, the degree of autophagy (12). The THP rats had an elevated number of green-fluorescent LC3 puncta and ratio of LC3-II/LC3-I, suggesting that their cardiomyocytes had a large number of autophagosomes and an increase in autophagy. The QSHWC-L, QSHWC-M, and QSHWC-L groups had fewer green fluorescent spots and a lower LC3-II/LC3-I ratio than the THP group, indicating that QSHWC reduced the formation of autophagosomes and that QSHWC might exert its myocardial-protective effect through inhibition of the autophagy of cardiomyocytes.

To explore the mechanism by which QSHWC reduced the THP-induced excessive activation of cardiomyocyte autophagy, we performed western blots for p-mTOR, mTOR, p-Akt, Akt, p-PI3K, and PI3K in the myocardium. p-mTOR, p-Akt, and p-PI3K were significantly lower in the THP group than the control group. QSHWC upregulated p-mTOR, p-Akt, and p-PI3K, while the PI3K inhibitor LY294002 significantly reversed the above effects of QSHWC. These results indicate that QSHWC inhibited excessive autophagy by activating the PI3K/Akt/mTOR pathway.

In summary, QSHWC activates the PI3K/Akt/mTOR pathway to inhibit the excessive autophagy of cardiomyocytes caused by THP, thereby exerting a protective effect on the myocardium, reducing THP-induced myocardial damage, and improving cardiac function.

Reporting Checklist: The authors have completed the ARRIVE reporting checklist. Available at http://dx.doi.org/10.21037/apm-20-1746

Conflicts of Interest: All authors have completed the ICMJE uniform disclosure form (available at http://dx.doi.org/10.21037/apm-20-1746). The authors have no conflicts of interest to declare.

Ethical Statement: The authors are accountable for all aspects of the work in ensuring that questions related to the accuracy or integrity of any part of the work are appropriately investigated and resolved. All the procedures were carried out according to the Guide for the Care and Use of Laboratory Animals published by the U.S. National Institutes of Health and were reviewed and approved by the Ethics Committee of Cangzhou Hospital of Integrated Traditional Chinese and Western Medicine (review batch number: 2019042).