Glucocorticoid-induced osteoporosis (GIOP) is a common side effect of glucocorticoid (GC) therapy and is the most frequent form of secondary osteoporosis (1). Long-term exogenous GC use eventually destroys microscopic bone structure and bone mass, resulting in secondary osteoporosis (2-4). Existing clinical data show that the risk of bone fracture from GC therapy increases along with the length of use and dosage. Heavy users of GCs carry a greater risk of sustaining bone fractures compared with short-term users (5-8). Fracture is a serious complication of osteoporosis. The incidence of fractures among adult patients aged between 20 and 45 years old who receive long-term GC therapy is as high as 30–50% (9,10). This places a considerable financial and social burden on patients and their families. Therefore, it is crucial to prevent GIOP by regulating bone metabolism.

The underlying mechanism of GIOP is believed to involve the decrease of osteoblast activity and the enhancement of osteoclast activity, leading to decreased bone formation and increased bone destruction (11-13). Dickkopf-related protein 1 (DKK1), runt-related transcription factor 2 (Runx2), and cathepsin K (CTSK) are involved in the action mechanism of Chinese herbal medicine compounds. DKK1 was only expressed in osteoblasts and osteocytes. It is an inhibitor of the Wnt/β-catenin signaling pathway and serves as an important target for the prevention and treatment of GIOP (14,15). It exerts an inhibitive effect on Wnt signaling pathway transduction by competitively binding to Wnt protein Frizzled-LRP5/6 complex receptors to reduce the binding rate of Wnt ligands (16). Runx2 is an osteogenic marker. Runx2 mRNA is a target of the bone morphogenetic protein pathway and is an essential factor in the regulation of osteoblast differentiation (17). Meanwhile, monocyte chemotactic protein-1 can induce the differentiation of monocytes into cathepsin K-positive osteoclast precursors. Osteoclasts present CTSK mRNA, which causes bone destruction (18).

In traditional Chinese medicine, osteoporosis belongs to the category of “bone witherosis”. Experiments have proved that traditional Chinese medicine compounds can inhibit bone absorption, promote bone formation, and effectively prevent GIOP. Gumi Bao decoction plays an active role in the prevention and treatment of osteoporosis; however, its prevention mechanism has yet to be fully elucidated. Therefore, this study aimed to investigate the effects of Gumi Bao decoction on DKK1 mRNA, Runx2 mRNA, and CTSK mRNA in GIOP in rats and to investigate the theoretical and scientific basis.

We present the following article in accordance with the ARRVIE reporting checklist (available at http://dx.doi.org/10.21037/apm-20-1340).

Decoction method: The pure ingredients were soaked in water for 30 minutes and then decocted in a Chinese herbal medicine decoction machine for 40 minutes. This step was repeated twice. Then, two different concentrations of the decocting solution were pooled together, put into an electrothermal constant temperature water tank, and diluted to a concentration of 2.0 g of Gumi Bao decoction per mL. The samples were sealed and stored in a refrigerator at 4 °C. The validity of the decoction was set to 1 week, and it was prepared weekly.

Establishment of experimental animal of GIOP and treatment

Hulley’s method (19) was used to establish a GIOP rat model. The Met group was subcutaneously injected with methylprednisolone (5.0 mg/kg, once a day). After the model had been successfully established, the rats in the Fosamax group were given Fosamax (2 mg/kg, once a day) via intragastric administration. The rats in the GBDL (5.0 g/kg), GBDM (10.0 g/kg), and GBDH (20.0 g/kg) groups were intragastrically administered Gumi Bao decoction once a day. The rats in the NC group received a daily subcutaneous injection of normal saline (0.75 mL/kg) once a day. Each group was given intervention for 6 weeks, during which time the rats were weighed weekly and the drug dose was adjusted according to the body mass.

Rats in each group were euthanized by cervical dislocation, and the second lumbar vertebra was collected. Total RNA was extracted with a Trizol kit, after which the mRNA expressions of DKK1, Runx2, and CTSK were detected by reverse transcription and amplification by real-time polymerase chain reaction (PCR) (Figures 1-3). The data were analyzed with ABI Prism 7300 SDS Software. Primers were purchased from Shanghai Banyi Biological Co., Ltd (Shanghai, China) (Table 1). 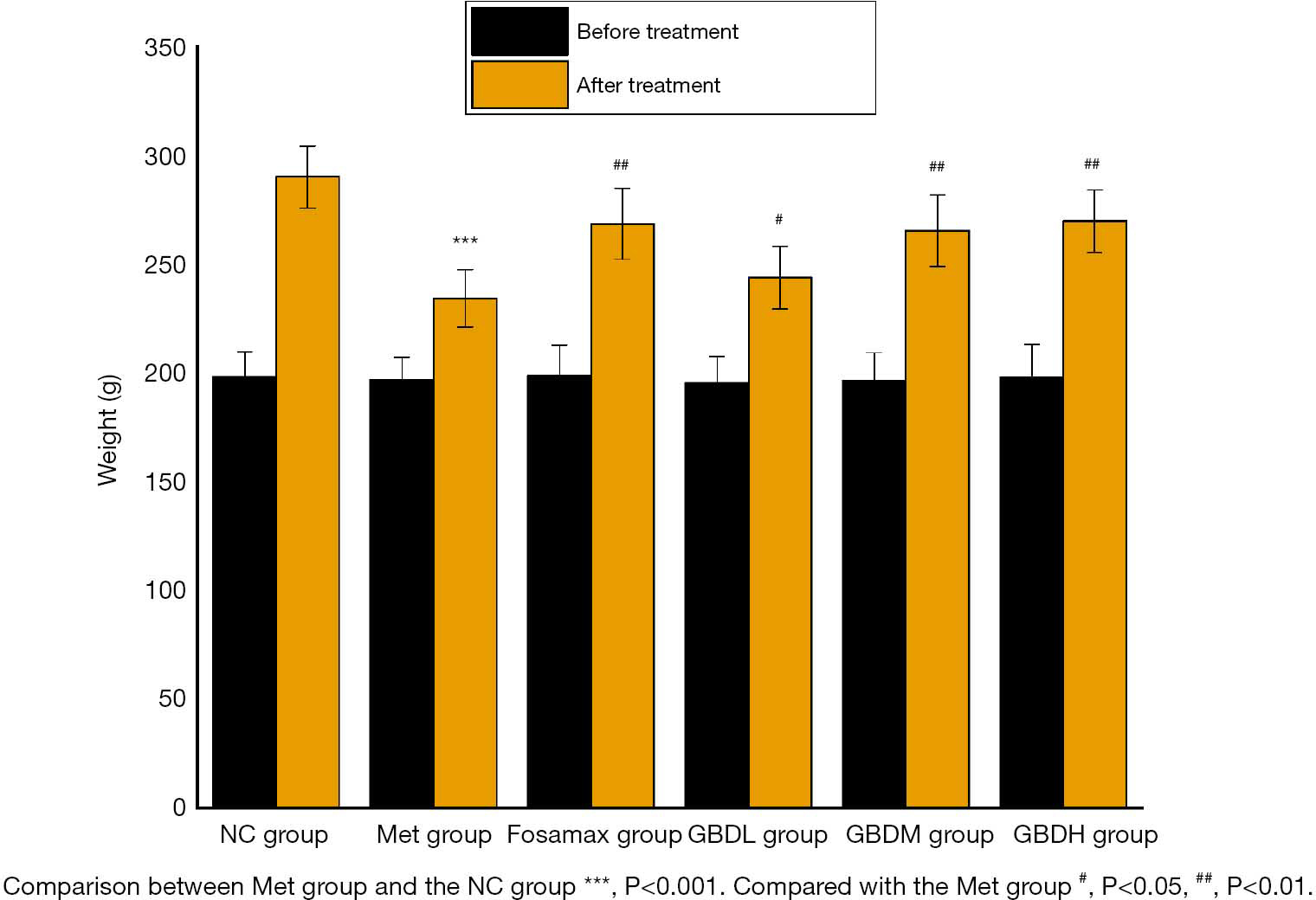 Figure 1 The weights of rats before and after treatment (). 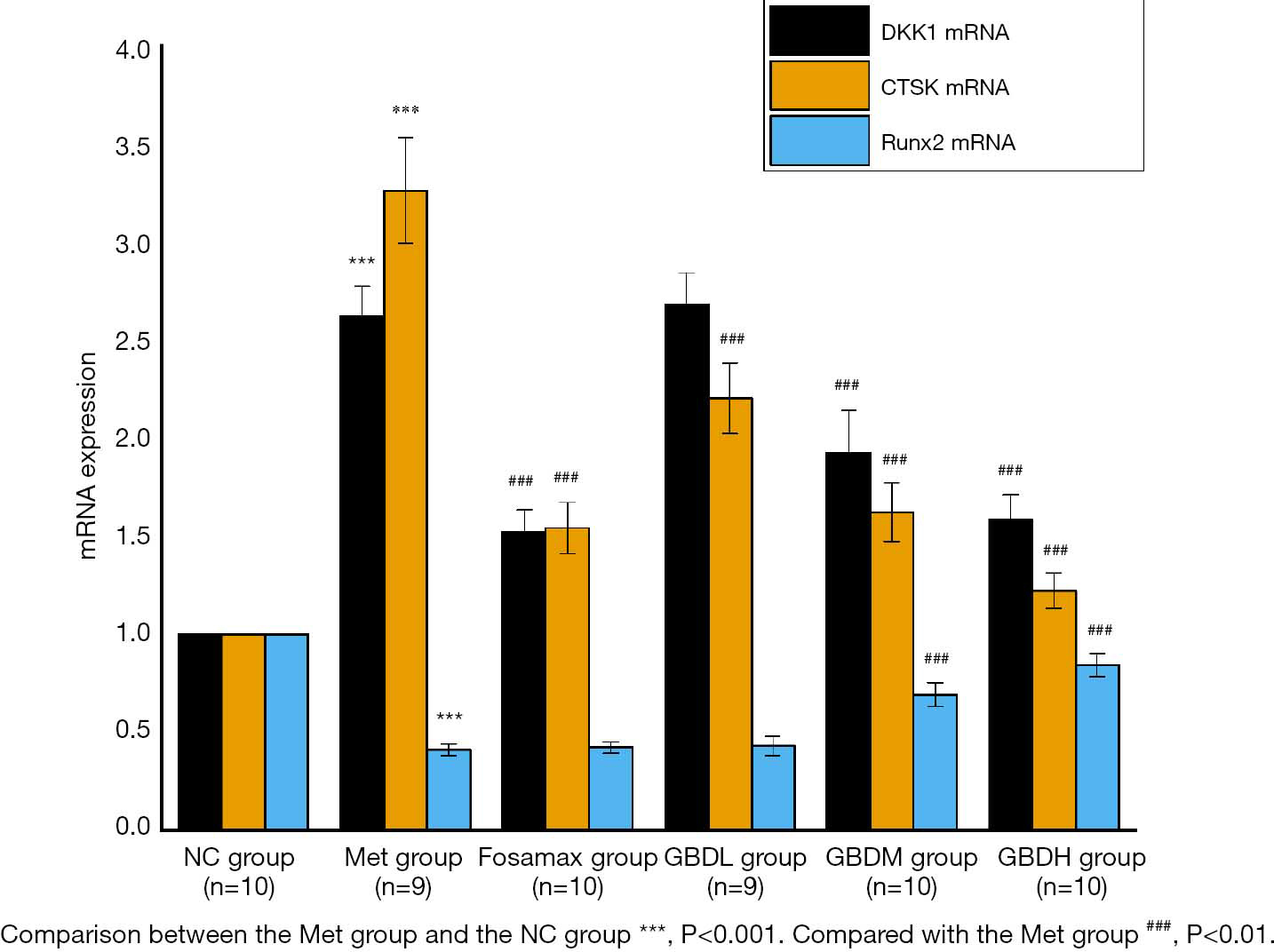 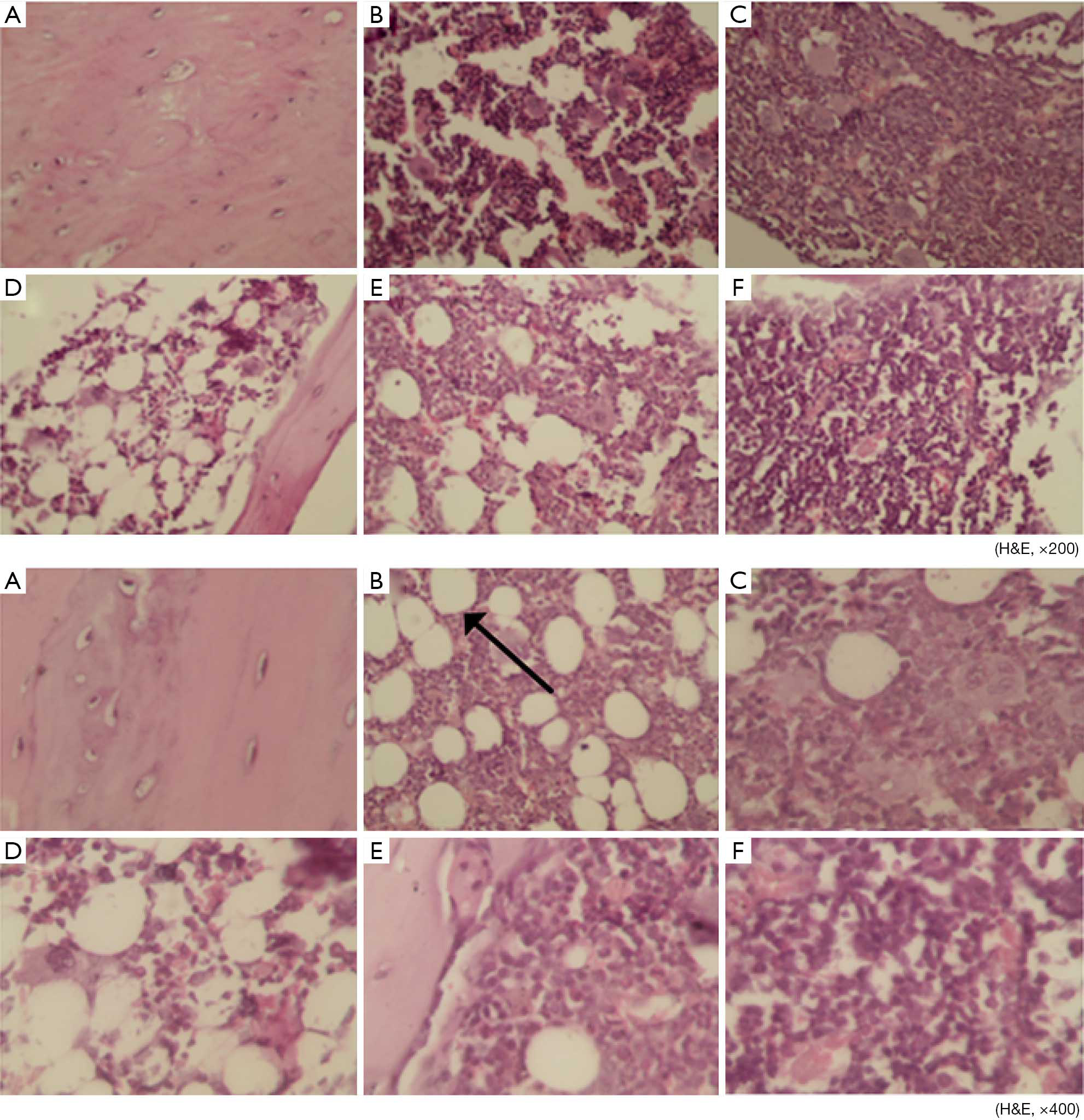 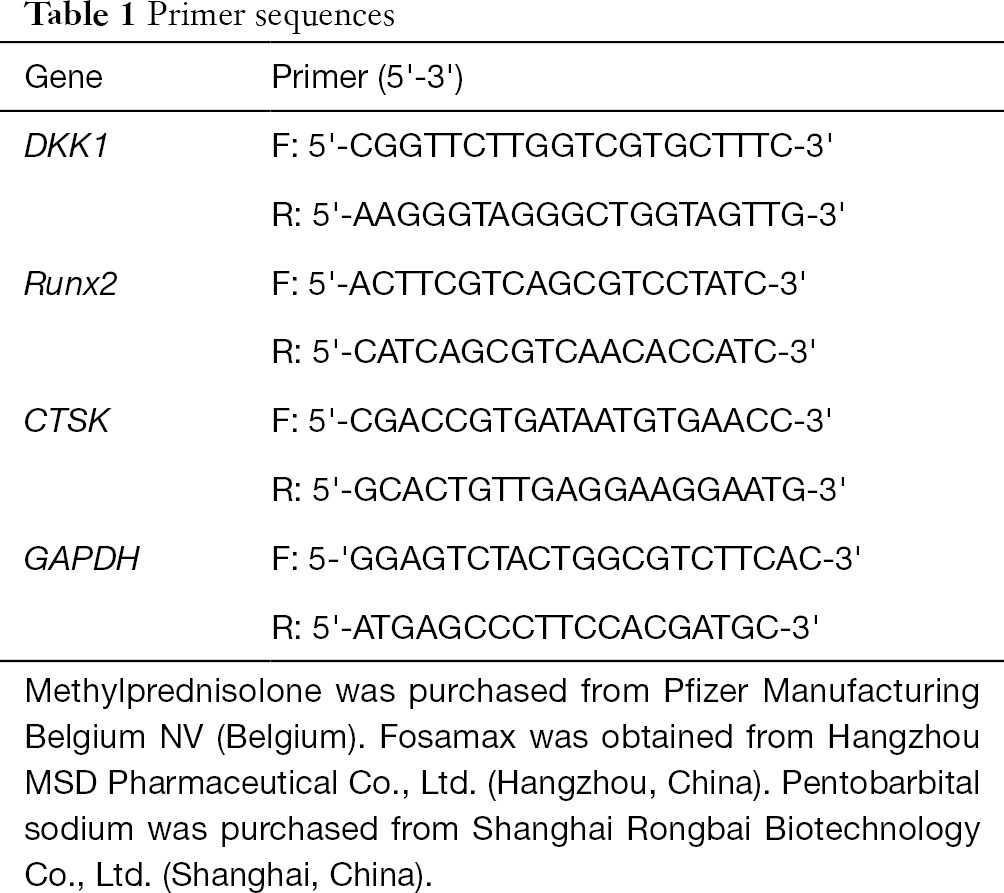 The fourth lumbar vertebra and the left femur of three rats from each group were collected. The samples were sequentially decalcificated, embedded, fixed, sectioned, and stained with hematoxylin and eosin (H&E).

Data analysis was performed with SPSS 22.0 (IBM, USA). The data were expressed as the mean ± standard (). The measurement data were analyzed by one-way analysis of variance (ANOVA) when the data satisfied the assumption of homogeneity of variance, or at least significant difference test (LSD-t) was performed for pairwise comparisons. P<0.05 was considered to represent statistically significant difference.

General observations of the rats

During the intervention, the rats in the Met group gradually became lethargic, their fur became sparse and lackluster, and they had lower food intake and slow body mass growth. In contrast, the rats in the NC group showed no signs of lethargy and had shiny fur. In the first 3 weeks of intervention, the rats in the Fosamax, GBDM, and GBDH groups exhibited sparse and lackluster fur, lethargy, and less food intake, but their conditions gradually improved in the second 3 weeks. No obvious improvement was observed in the GBDL group compared with the Met group.

During the experiment, 1 rat in the Met group died from infection and 1 rat in the GBDL group died from gavage. After the intervention, the weight of the rats in the GBDL group was significantly decreased compared to that of the NC group rats (P<0.001). Meanwhile, the weight of the rats in the Fosamax, GBDM, GBDH (P<0.01), and GBDL (P<0.05) groups was significantly increased compared with the Met group (Figure 1).

Morphological changes in the femur and L4 in rats

As shown in Figure 3, there were fewer osteoblasts and osteocytes in the trabecular bone of the Met group (B) than in that of the Fosamax group (C) and the GBDH group (F) under 200× H&E staining. The bone tissue of each group of rats (B,C,D,E,F) other than the NC group (A) showed structural destruction of trabecular bone to varying degrees. Among the groups of 200× H&E staining, the bone structure of the Met (B) and GBDL (D) groups was seriously damaged. The phenomenon of H&E staining at 400× was similar to that at 200×. The images from the GBDH (F) and Fosamax (C) groups reveal the integrity of the structure of trabecular bone and show that no adipose tissue was formed. A predominance of adipose tissue (marked by black arrows) was found in the Met (B) and GBDL (D) groups, and a small amount of adipose tissue had formed in the Fosamax (C) and GBDM (E) groups.

Figure 4 shows H&E staining (at 200× and 400×) of the rat L4 spinal sections. In contrast with the NC group (A), the trabecular bone was structurally intact and osteocytes and osteoblasts were abundant in the GBDM (E) and GBDH (F) groups. The structural destruction of trabecular bone was obvious in the GBDL group (D). A large amount of adipose tissue under 400× H&E staining could be seen in GBDL group (D), but there was less in the GBDM group (E). In the GBDH (F) and Fosamax (C) groups, the bone structure was relatively intact, and there was less adipose tissue. 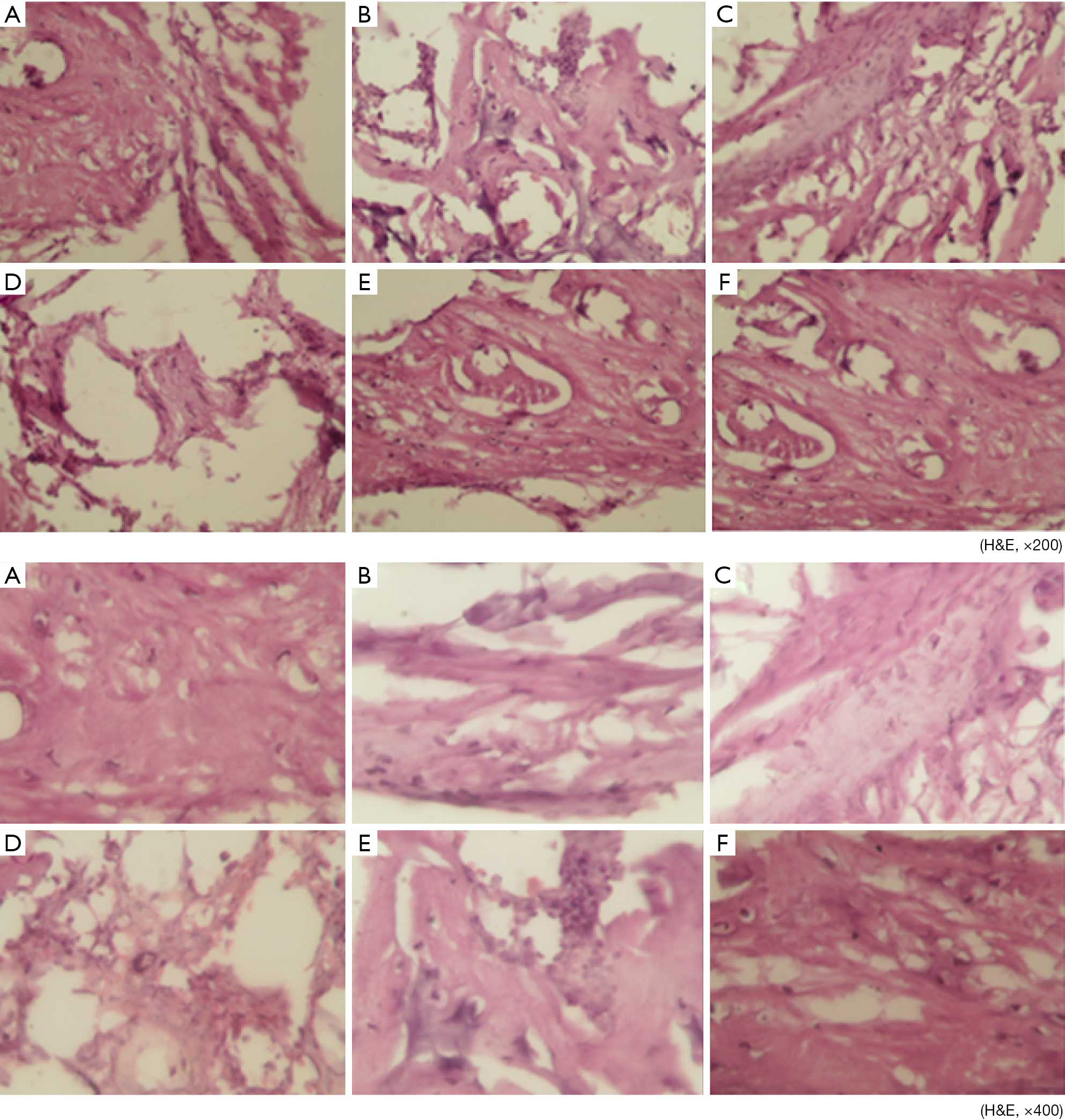 In the theory of traditional Chinese medicine, long-term GC use can easily damage Yin fluid, and kidney Yin deficiency is insufficient for the metaplasia of kidney Yang. This causes deficiency of kidney Yang and kidney Yin, bone deficit, marrow reduction, and blood stasis, which ultimately leads to GIOP. During intervention with methylprednisolone, the rats in the Met group gradually displayed sparse and lackluster fur, lethargy, low food intake, and slow growth of body mass. Compared with the Met group, the weight of the rats in the Fosamax group and the GBDL, GBDM and GBDH groups was significantly increased. Gumi Bao decoction not only nourishes the essence of Yin and Yang to enrich the kidney, but also nourishes the source of acquired biochemistry to strengthen spleen qi. Traditional Chinese medicine for invigorating blood and removing blood stasis can also have the effect of tonifying the kidney without stagnation.

Dickkopf-related proteins are important inhibitors of the Wnt/β-catenin signaling pathway, which regulates osteoblast differentiation and promotes osteogenesis. Studies have shown that GCs can induce the up-regulation of DKK1 expression to inhibit the Wnt/β-catenin signaling pathway. The expression level of DKK1 directly affects the transduction of the downstream Wnt signaling pathway and plays a major role in the regulation of osteogenic differentiation. The expression level of DKK1 in bone tissue was inversely proportional to the bone mass of the rats, and the increase of serum DKK1 level was closely related to the destruction of human bone microstructures (20). Our study showed that after 6 weeks of intervention, osteoblasts and osteocytes in the vertebral body and femoral bone tissues of the rats in the Met group had sustained damaged, with up-regulated expression of DKK1.

GCs could reduce the expression of the bone formation-associated gene Runx2 (21). Runx2 is a target of bone morphogenetic proteins and a key factor in the regulation of osteoblast differentiation. Runx2 is a transcription factor in the runt-related gene family, which regulates osteogenic differentiation by binding to specific DNA sequences and up-regulates the transcription of various mineral-related protein genes in pre-osteoblasts and chondrocytes. Runx2 promotes osteogenesis and inhibits adipogenesis in bone mesenchymal stem cells (BMSCs) (22). In this study, Runx2 was down-regulated in rats after GC intervention. Compared with the Met group, Runx2 mRNA was up-regulated after intervention with Gumin Bao decoction, which suggests that Gumin Bao decoction can regulate DKK1 to promote the prevention and treatment of GIOP.

CTSK is an osteoporosis-targeted protease, and activated osteoclasts specifically express mature CTSK. CTSK accumulates in osteoclast lysosome vesicles and is released into the extracellular absorption lacunae in the acidic environment. CTSK can degrade type I collagen: type I collagen N-terminal peptide can be degraded to produce N-terminal peptide, while C-terminal peptide of type I collagen can be degraded to produce C-terminal telopeptide (23). In this study, osteoclast-related factor CTSK was up-regulated after GC intervention. After 6 weeks of intervention, CTSK mRNA expression was down-regulated. This indicates that Gumi Bao decoction could be used to regulate DKK1 and inhibit osteoclasts in order to prevent and treat GIOP.

The results of this study show that vertebral DKK1 mRNA was significantly up-regulated, osteoblastic regulator Runx2 mRNA was significantly down-regulated, and osteoclast regulator CTSK mRNA was significantly up-regulated after intervention in the Met group. Our findings indicate that the imbalance of bone homeostasis in GIOP is caused by the influence of increased bone resorption and decreased osteogenesis. After intervention, in the GBDM group and the GBDH group, the mRNA expression of DKK1 and CTSK was down-regulated and that of Runx2 was up-regulated, which suggests that Gumi Bao decoction can regulate DKK1 to promote osteogenesis, inhibit osteoclast, and regulate bone metabolism via the Wnt/β-catenin signaling pathway to prevent and treat GIOP.

Funding: This work is supported by the Taicang Science and Technology Bureau Key Research and Development Plan (Social Development) (TC2017SFYL10).

Reporting Checklist: The authors have completed the ARRIVE reporting checklist. Available at http://dx.doi.org/10.21037/apm-20-1340

Conflicts of Interest: All authors have completed the ICMJE uniform disclosure form (available at http://dx.doi.org/10.21037/apm-20-1340). The authors have no conflicts of interest to declare.

Ethical Statement: The authors are accountable for all aspects of the work in ensuring that questions related to the accuracy or integrity of any part of the work are appropriately investigated and resolved. Experiments were performed under a project license (ID: 201901) granted by the Animal Care Welfare Committee of Taicang TCM Hospital Affiliated to Nanjing University of Chinese Medicine, in compliance with Chinese national guidelines for the care and use of animals.