High myopia (HM), defined by a refractive error of at least −5.00 diopters (D) or −6.00 D, has increasingly been highlighted as a public health problem in many countries. It was estimated that by 2050, almost one billion people will be affected by HM (1). Severe myopia (SM), which is commonly defined as a refractive error exceeding −10.0 D, is a more severe form of myopia (2). Primary open-angle glaucoma (POAG) is a heterogeneous condition characterized by progressive degeneration of the optic nerve, which may lead to irreversible blindness, and is often associated with elevated intraocular pressure (IOP) (1). Myopia and POAG are both complex eye diseases. Multiple epidemiologic studies have shown that patients with HM, and particularly those with SM, have an increased risk of developing POAG (3). Furthermore, several population-based studies have also shown that the risk of developing POAG increases with the severity of myopia. However, it is important to note that HM eyes show anatomic and structural changes that are clinically extremely challenging to distinguish from those observed in POAG, which may lead to overdiagnosis of POAG in myopic patients. It was reported that this misdiagnosed rate could be as high as 50% for cases of HM with POAG (4,5). To date, studies on visual field changes in SM eyes remain rare. Accordingly, we carried out the present study to investigate the properties of visual field changes in SM eyes and to provide evidence for the early diagnosis of POAG in cases of SM. We present the following article in accordance with the STROBE Reporting Checklist (available at http://dx.doi.org/10.21037/apm-19-605).

A total of 26 SM patients (44 eyes) who visited the Department of Ophthalmology at the First Affiliated Hospital of Kunming Medical University between January 2008 and January 2011 were enrolled in this study. Based on the degree of fundus changes, these patients were categorized into four groups: group I, normal fundus or tigroid fundus (eight eyes); group II, similar to group I + posterior scleral staphyloma (14 eyes); group III, similar to group II + lacquer crack lesion; group IV, similar to group III + Fuchs spot + extensive posterior atrophy of the retina and choroid (15 eyes). The study was approved by the Institutional Review Board of the Ethics Committee of Kunming Medical University and conducted in accordance with the Declaration of Helsinki (as revised in 2013). A written informed consent was obtained from all participants (or their legal guardians).

Patients with primary glaucoma, secondary glaucoma, other eye diseases that may influence IOP and the optic nerve, severe opacity of refractive media, obvious systemic disease, or intracranial disorders were excluded from the present study.

Objective and subjective refractive examinations were performed by the same optometrist. Ophthalmic ultrasound A and B scanners were used for the eyeball biological measurements. A Goldmann applanation tonometer was employed to test IOP. These tests were all conducted three times. The same ophthalmologist examined the ocular fundus with a slit lamp and performed the fundus photography.

The Humphrey Visual Field Analyzer 750i was employed using a diagnostic accuracy matrix of 24-2, and the SITA standard testing strategy was used for perimetry. All participants had experienced computerized perimetry more than twice. Correcting lenses were used according to the age and diopters of participants, and the results were identified and printed based on single visual field analysis.

Comparison between ocular fundus lesions and changes in visual fields 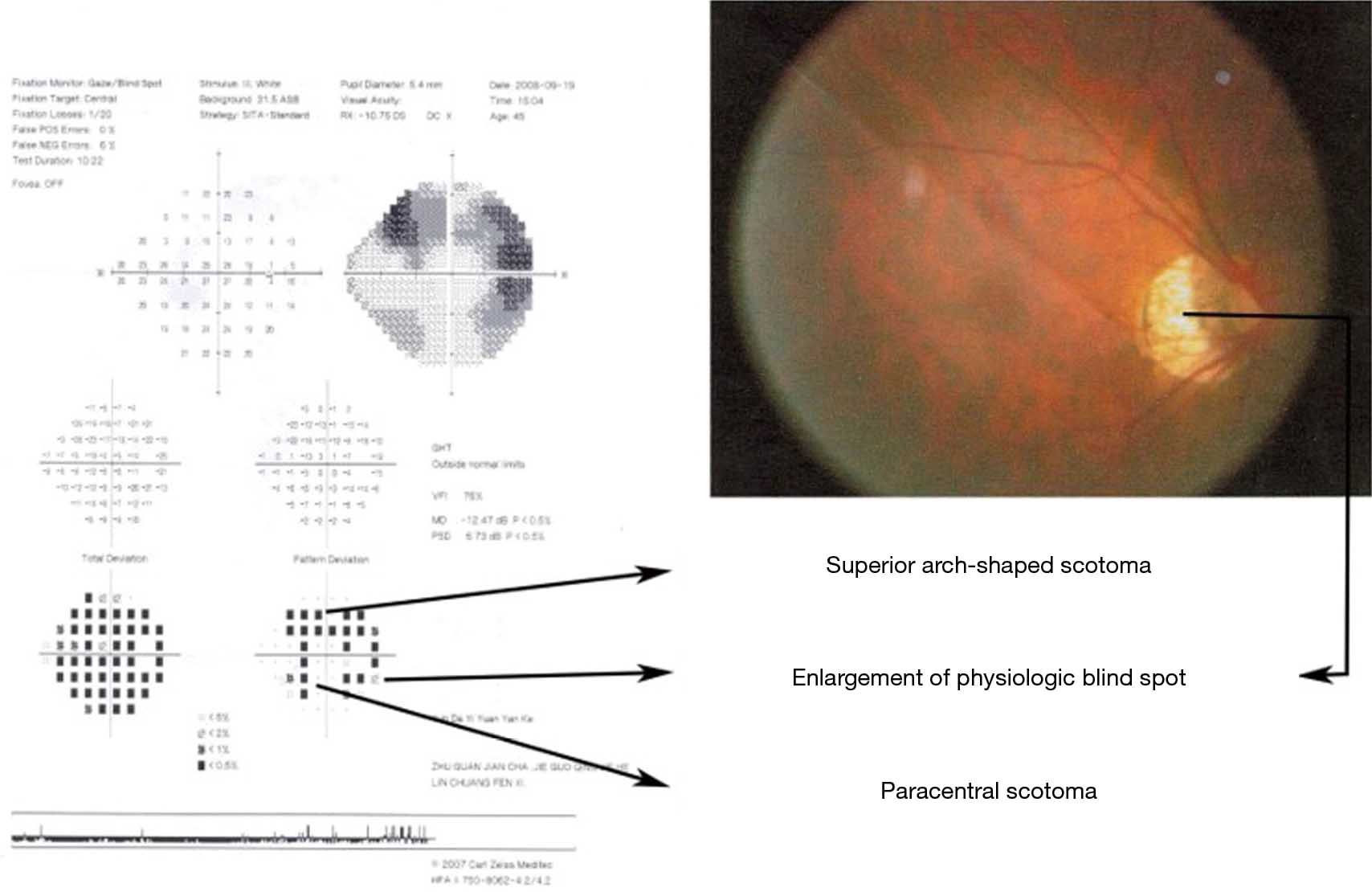 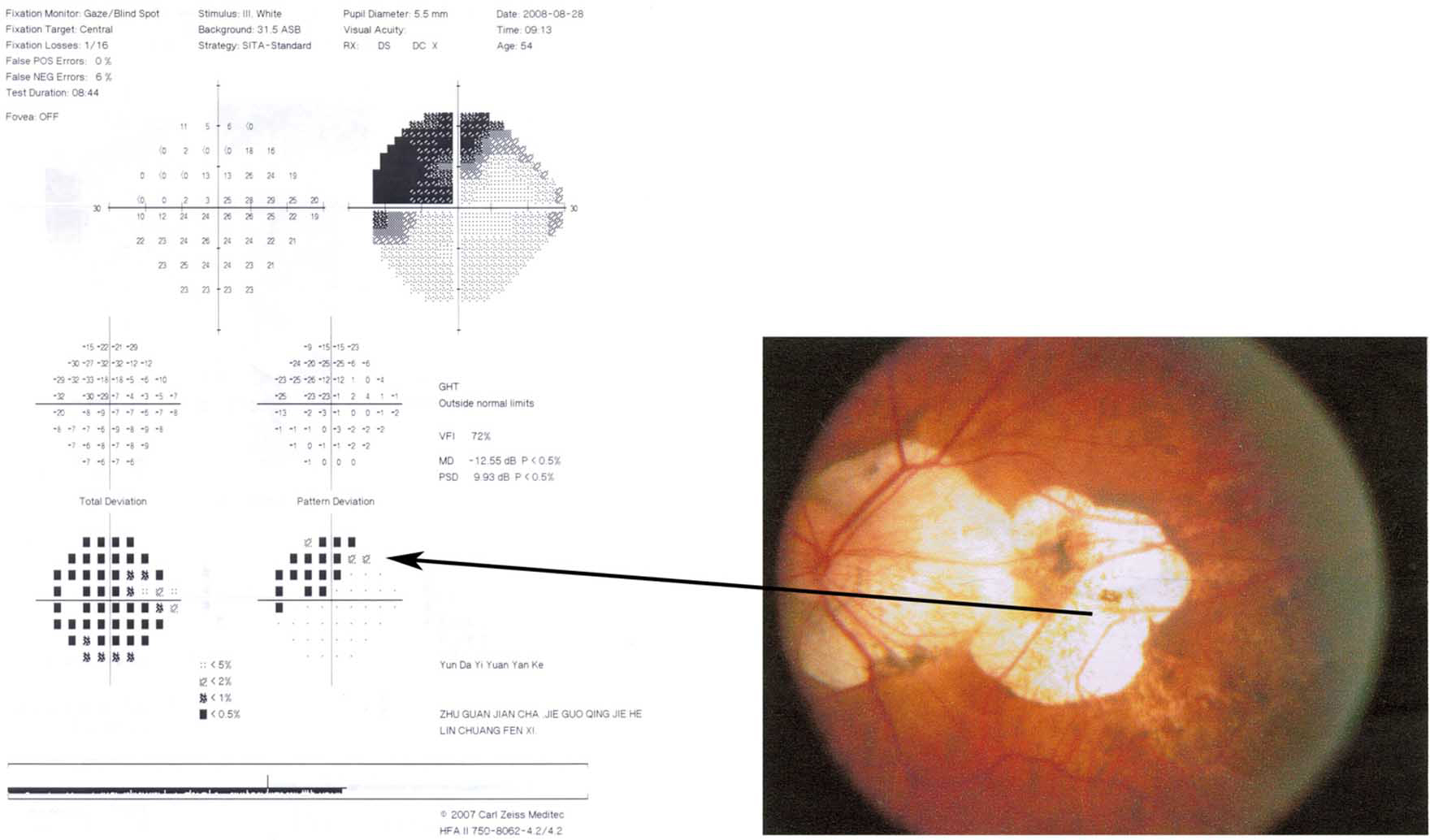 Figure 3 The morphology of scotomas in group IV patients. A superior arch-shaped scotoma joining the paracentral scotoma in the inferior, without any changes in the ocular fundus relating to the arch-shaped scotoma, but arc atrophy coalescing into the optic disc.

Among the types of scotomas present in the visual field, physiological blind spots and central scotomas were the two major types, followed by nasal step defects, paracentral scotomas, and temporal sector-shaped defects. The arch-shaped defect was found in only one case. The details of these findings are presented in Table 2.

The frequency of scotomas in the four quadrants

The characteristics of the visual field in SM include a general decrease in sensitivity, enlargement of the physiological blind spot, reduction of the peripheral visual field, and related central scotoma and/or paracentral scotoma. The myopic crescent near the optic disc was, in fact, parapapillary chorioretinal atrophy (PPCA), and patients suffering from HM with PPCA were likely to develop glaucoma (6,7). Visual field defects caused by myopic crescents may be similar to glaucomatous visual field defects, or may gradually develop into focal retinal detachment near the optic disc (8). It was shown (9) that blood circulation became slow in the choroid of patients with HM, which led to hypoperfusion in the blood capillary of the choroid and the capillary system of the retina. As a result, the blood supply to the macular area was affected, and angiogenic factors were generated. This rendered the formation of neovascularization possible in the choroid, resulting in central vision loss in patients with HM, which manifested as central scotomas and paracentral scotomas (10).

The present study found that annular scotomas in the 44 eyes essentially occurred in the temporal quadrant. One possible reason for this may have been that the distance between the lamina cribrosa and retina in myopic eyes was observably shorter than in emmetropic or hyperopic eyes (11,12). Therefore, complete optic disc cupping in patients with glaucoma and myopia is present only to half of the degree than in those with glaucoma, and not in those with myopia. The thin, tight lamina cribrosa diminishes the optic disc to prevent the damage caused by glaucoma. Consequently, the optic disc is particularly susceptible to damage by glaucoma. For a patient with SM and POAG, the pathological changes in the retina and choroid coexist with high IOP, which means that the optical nerve is attacked by “double forces”. This will cause more damage to the optic ganglions, and at a more rapid pace.

The highest frequency of scotomas in the present study was observed in the inferior temporal quadrant, and these visual field defects were, to some degree, related to the normal distribution of optic nerve fibers. The average diameters of nerve fibers in the surrounding area of the superior quadrant and nasal quadrant were larger, which may eventually serve as an anatomical basis for explaining easy damage to the temporal visual field. This phenomenon was consistent with results reported by Vernon et al. (13), in which optical coherence tomography was used to reveal that the superior nervous fiber close to the optic disc among Caucasian HM patients was the thickest (98.3 µm), while that in the nasal quadrant was the thinnest (54 µm).

Relevant ocular fundus changes were found in 95.45% of the focal visual field defects in the present study. Among the 44 eyes, 13 eyes (29.55%) developed multiple focal visual field defects. With the degeneration of ocular fundus changes in SM, extensive map-like atrophy may occur in the retina and choroid among patients in group IV. This correlated to an extensive decrease in sensitivity in the visual field and sector-shaped defects in the temporal quadrant. These defects conceal mild, scattered scotomas, which subsequently create larger defects by coalescing into one another.

Conflicts of Interest: All authors have completed the ICMJE uniform disclosure form (available at http://dx.doi.org/10.21037/apm-19-605). The authors have no conflicts of interest to declare.

Ethical Statement: The authors are accountable for all aspects of the work in ensuring that questions related to the accuracy or integrity of any part of the work are appropriately investigated and resolved. This study was conducted in accordance with the Declaration of Helsinki (as revised in 2013) and approved by the Ethics Committee of The First Affiliated Hospital of Kunming Medical University. A written informed consent was obtained from all participants (or their legal guardians).