Tregs express significant amounts of C-X-C chemokine family members that mediate the traffic and recruitment of immune cells to the inflammation sites (12). CXC family member CXCL10 and CXCL14 are documented important roles in immune regulation in inflammatory-associated coronary artery disease, atherosclerosis (13,14), or ischemic stroke (15). CXCL4 is involved in atherosclerosis and other inflammatory diseases through forming a CC-type heterodimer with CCL5 (16), drives chemotaxis of CCR1-expressing cells (17) and its neutralizing antibody activates platelets in autoimmune disorders, especially in thrombocytopenia in the absence of heparin (18). Report has demonstrated that CXCL4 augment the secretion of pro-inflammatory cytokines of human CD4+ T cells, and meanwhile favors the stimulation of T1 and T17 cells, the two subsets of CD4+ T cells, in psoriatic arthritis (19). However, whether CXCL4 regulated Tregs and whether CXCL4 would represent an immunomodulator in chronic osteomyelitis remained largely unknown.

Signal transducer and activator of transcription 5 (STAT5) plays a key role in the development of Tregs (20). CXCL4 signaling experiments show involvement of mitogen-activated protein (MAP) kinases, Src and p70S6 kinase in cells expressing CXCR3A and CXCR3B (21). Evidence suggests that chemokine CXCL12 activates STAT5 pathway (22). In this work, to study the effect of chemokine CXCL4 on Tregs induction, and whether STAT5 pathway was the underlying mechanism, CD4+ T cells, isolated from patients with chronic osteomyelitis and corresponding healthy donor (HD), were treated with anti-CXCL4 antibody or recombinant CXCL4 protein in vitro. STAT5 inhibitor (IST5-002) was used to block STAT5 pathway (23). Our data suggested that CXCL4 regulated the percentage of Tregs in CD4+ T cells via JAK3/STAT5 pathway.

To study the involvement of CXCL4 in chronic osteomyelitis, serum sample of 37 patients with chronic osteomyelitis and 30 corresponding healthy people were recruited from Tongde Hospital of Zhejiang Province without significant difference in age and gender between those two groups. The inclusion criteria were as follows: (I) diagnosis with chronic osteomyelitis; (II) age: 18–70; (III) with the patient’s informed consent. And the exclusion criteria were as follows: (I) with diseases of heart, liver, kidney and other organs; (II) with diabetes; (III) with other infectious diseases; (IV) with bone tuberculosis and tumor. And the patient demographic was listed in Table 1. This study was approved by the Ethics Committee of Tongde Hospital of Zhejiang Province (No. 2016-016), and conducted in accordance with the Declaration of Helsinki (as revised in 2013). Written informed consent from the participants was obtained. Human platelet factor 4 (PF4/CXCL4) ELISA assay kit (ab189573, Abcam, USA) was used to determine serum CXCL4 concentration (ng/mL) accordance with the manufacture’s procedure.

To assess the roles of CXCL4 in regulating Tregs percentage, freshly purified CD4+ T cells from patients were co-cultured with 200 and 500 µg/L of anti-CXCL4 antibody (Abcam Cat# ab9561, RRID:AB_308720) for 24 h. To study the involvement of STAT5 pathway in the promoted effect of CXCL4 protein on Tregs content, CD4+ T cells from healthy people were treated with 100 ng/mL of recombinant CXCL4 protein (795-P4-025, R&D), or 100 ng/mL of recombinant CXCL4 protein plus 10 µM of STAT5 inhibitor (Fox Chase Chemical Diversity, USA) (23).

CXCL4 was up-regulated in chronic osteomyelitis 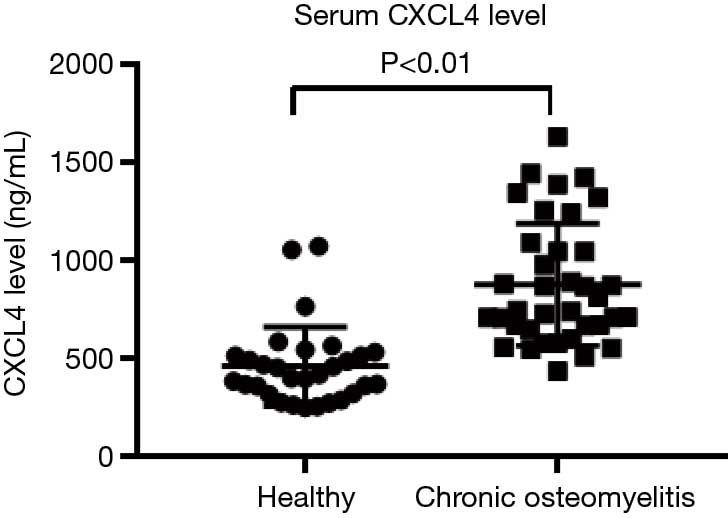 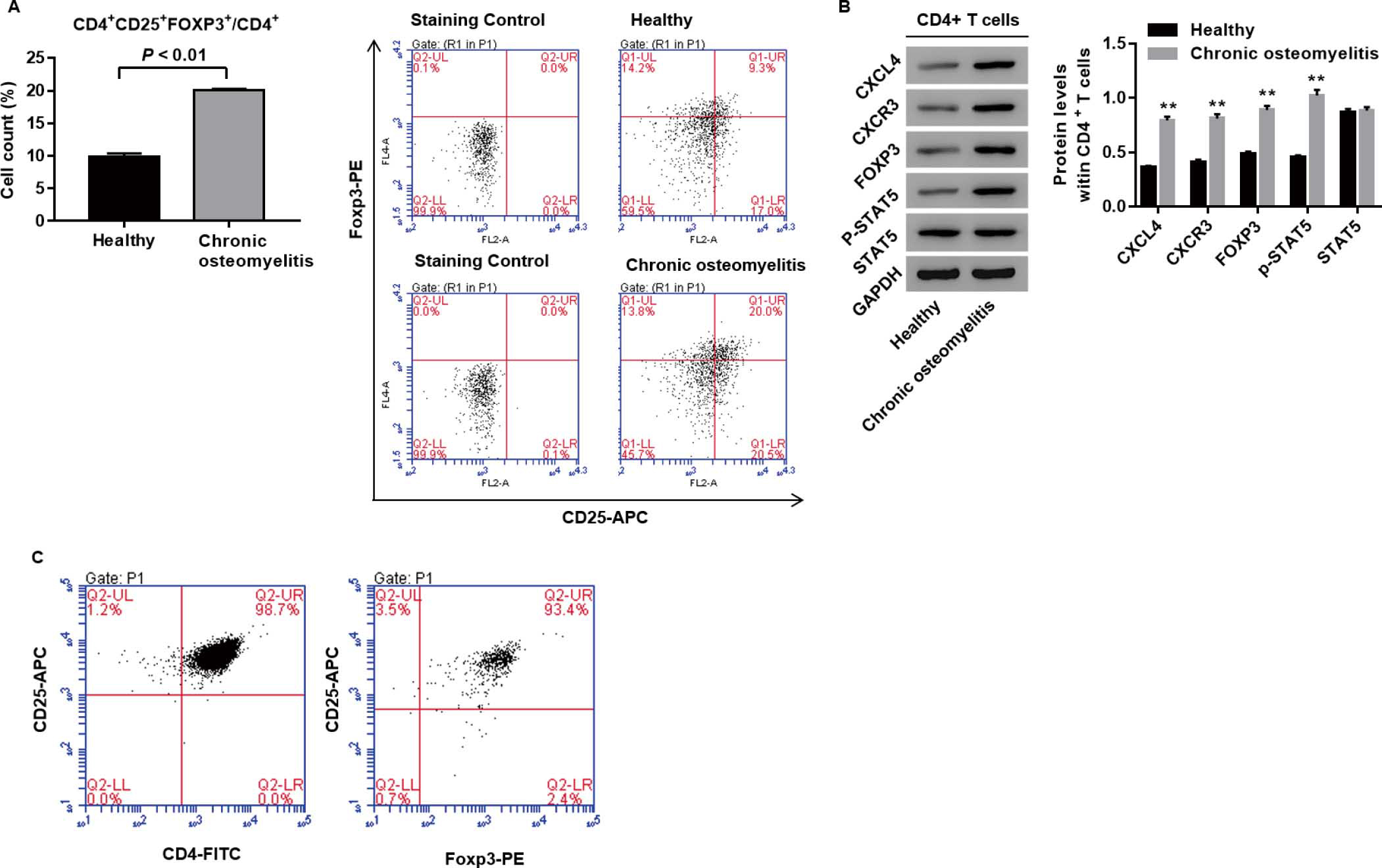 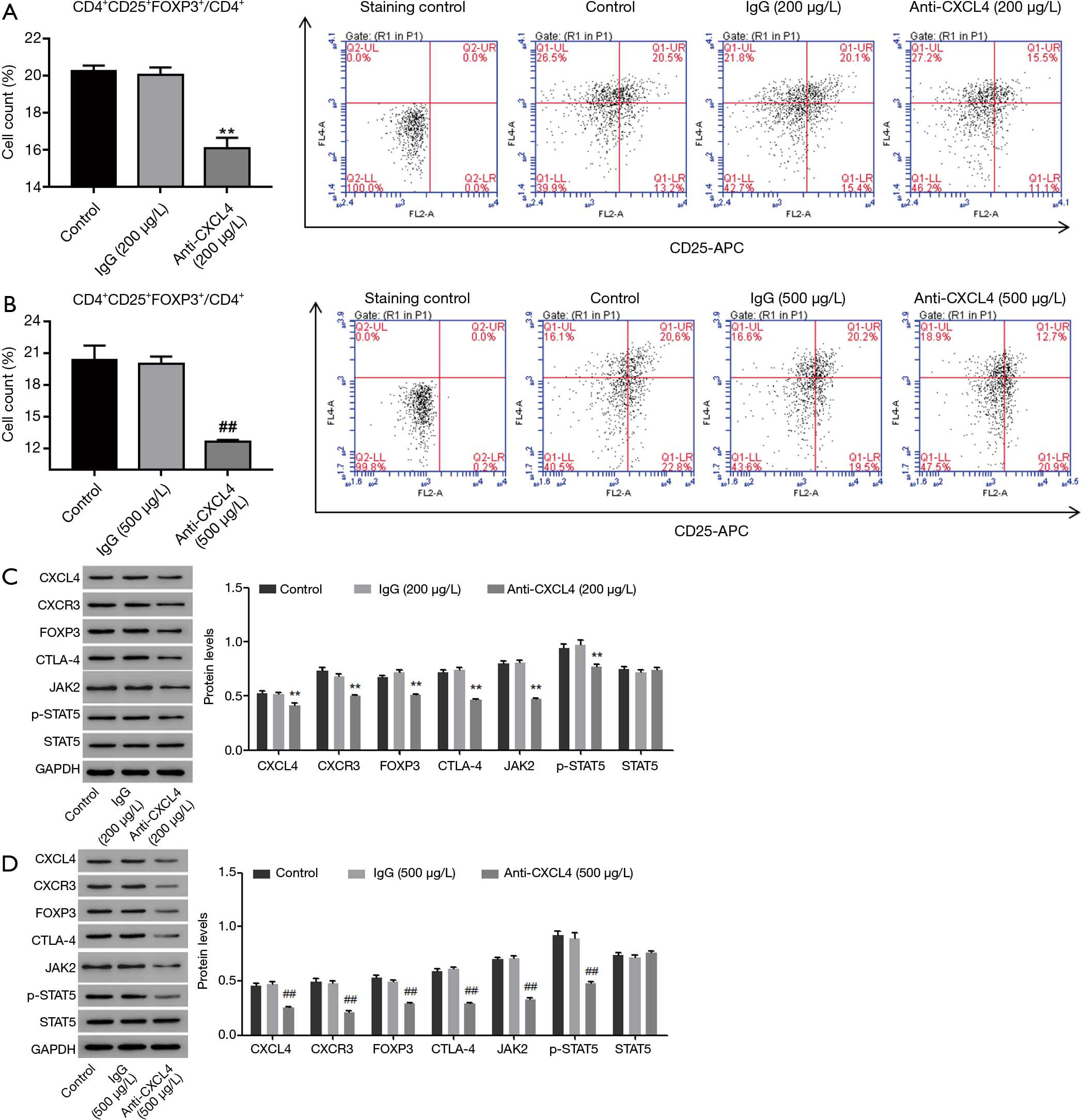 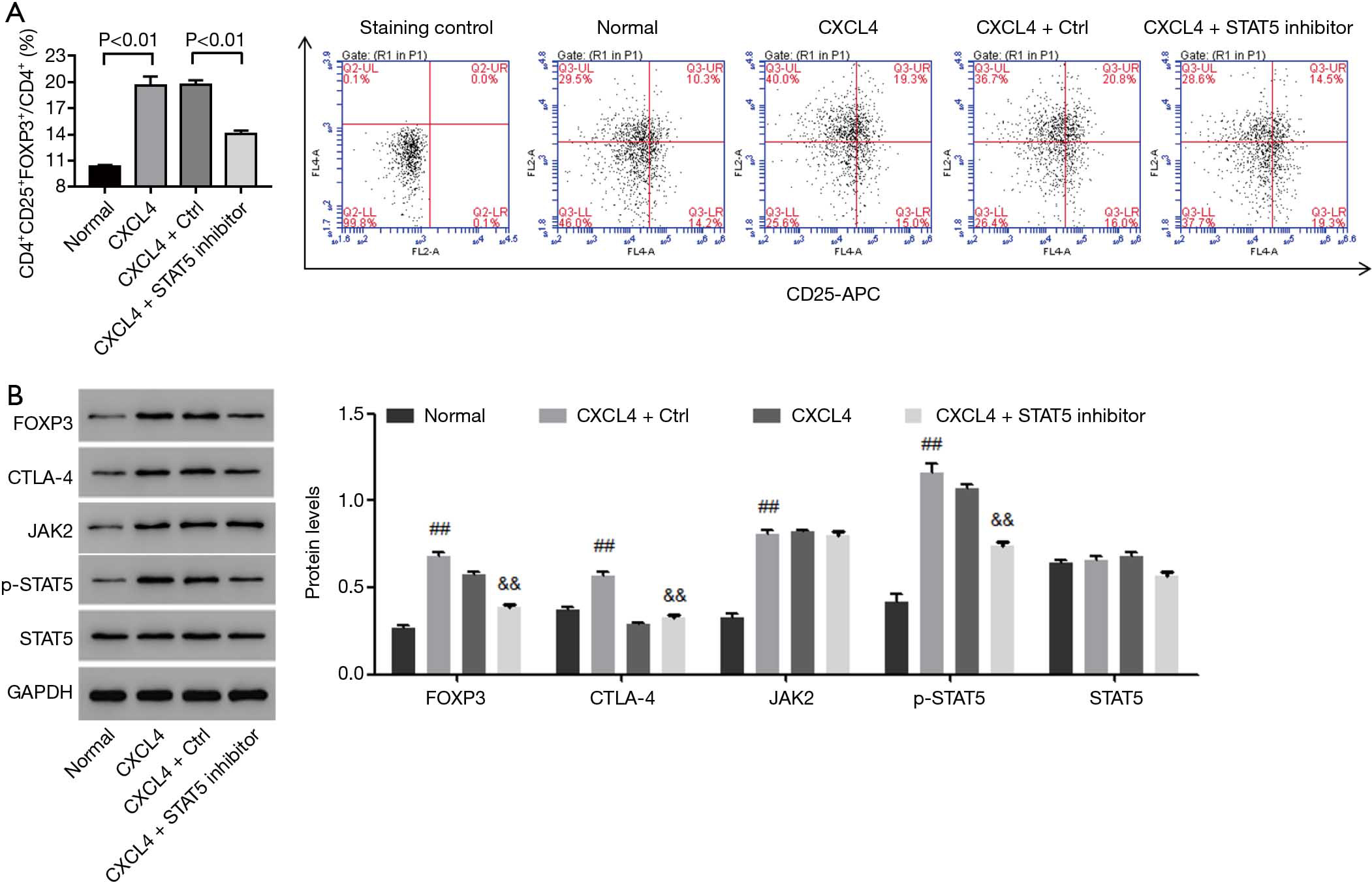 FOXP3 confers the regulatory activity of Tregs which not only regulates suppressive phenotype of Tregs, but also stabilizes the Tregs lineage (7,24). Loss of FOXP3 impairs immune suppressive activity of Tregs (25,26). Furthermore, Tregs constitutively express CTLA-4, the other marker of Tregs activation, which is not Treg-cell-specific or participates in in vitro immunosuppression (8). To elucidate the regulation of CXCL4 on Tregs at molecular levels, protein expression of FOXP3 and CTLA-4 within CD4+ T cells was assessed in the presence of anti-CXCL4 antibody or recombinant CXCL4 protein. Our results suggested that anti-CXCL4 antibody (200 and 500 µg/L) dose-dependently decreased FOXP3 and CTLA-4 (Figure 2C,D). Conversely, recombinant CXCL4 significantly increased FOXP3 and CTLA-4 (Figure 3B), indicating the promoted effect of CXCL4 on the activation and function of Tregs at a molecule level. Furthermore, evidence suggested that chemokine receptor CXCR3, secreted on circulating human Tregs, mediates the transportation of Tregs into the peripheral sites of inflammation (27). Inspiringly, our data firstly suggested the reduction of CXCR3 within Tregs in the presence of anti-CXCL4 antibody (Figure 2C,D).

Activation of STAT5 is sufficient to increase the numbers Tregs, favors FOXP3 expression in Tregs, and facilitates Treg cell function in vitro (28,29). STAT5 is a transcription factor, which is involved in cytosolic signaling and in mediating the expression of specific genes. Upon activation of JAKs through cytokine and growth factors stimulation, receptor associated and unphosphorylated STATs will be phosphorylated, which subsequently results in parallel dimerization and translocation to the nucleus to activate gene transcription (30). STAT5 pathway modulates Tregs function in asthmatics and diabetes (31,32). However, fewer reports have demonstrated the roles of STAT5 in regulating Tregs in chronic osteomyelitis. Our results indicated that the activation of STAT5 within CD4+ T cells was suppressed by anti-CXCL4 antibody while accelerated under recombinant CXCL4 treatment (Figures 2,3). Morcinek et al. (33) demonstrated that STAT5 could regulate the proliferation and apoptosis of cells, which is probably the cause of number changes in Tregs cell. Furthermore, recombinant CXCL4 induced the promoted effect on Tregs percentage and on the expression of FOXP3 and CTLA-4 within CD4+ T cells were significantly reversed by additional treatment of STAT5 inhibitor, substantiating that activation of STAT5 pathway was the mechanism, by which CXCL4 regulated Tregs content and activation in chronic osteomyelitis.

Anti-CXCL4 antibody inhibited Tregs percentage and reduced the expression of FOXP3 and CTLA-4 in CD4+ T cells, and blocking STAT5 activation was the underlying mechanism. Our data suggested that stimulation of CD4+ T cells with anti-CXCL4 antibody influenced Tregs content and its function. Further effort is needed to explore whether targeting CXCL4 is an immunotherapeutic strategy to block human chronic osteomyelitis.

Conflicts of Interest: Both authors have completed the ICMJE uniform disclosure form (available at http://dx.doi.org/10.21037/apm-20-166). The authors have no conflicts of interest to declare.

Ethical Statement: The authors are accountable for all aspects of the work in ensuring that questions related to the accuracy or integrity of any part of the work are appropriately investigated and resolved. This study was approved by the Ethics Committee of Tongde Hospital of Zhejiang Province (No. 2016-016), and conducted in accordance with the Declaration of Helsinki (as revised in 2013). Written informed consent from the participants was obtained.