Brain metastasis of lung cancer is common in a lot of patients with non-small cell lung cancer (NSCLC) and may affect negatively survival and quality of life (1). Epidermal growth factor receptor (EGFR), widely distributed in human epidermal cells and stromal cells, is an important membrane surface receptor with tyrosine-kinase activity (2). EGFR exon 19 deletions and point mutations in exon 21 can be found in a lot of NSCLC patients (3). Actually, a variety of EGFR-sensitizing mutations were harbored in about 10–40% of NSCLC patients. Therefore, these vital therapeutic mutations are considered important for the advanced NSCLC.

The question is that it can’t be said to be satisfactory that the efficiency of first- and second-generation epidermal growth factor receptor tyrosine kinase inhibitors (EGFR-TKIs) in central nervous system (CNS) metastasis (4). Preclinical models and clinical studies had shown that these agents have limited ability to cross the blood–brain barrier, allowing the CNS to emerge as a sanctuary site for metastatic spread. Patients treated with first- or second-generation EGFR-TKIs were often with impressive initial response, but exhibit progression after 10–14 months (5,6). Osimertinib (7,8) is a third-generation tyrosine kinase inhibitor (TKI), initially approved for epidermal growth factor receptor (EGFR) mutant non-small cell lung cancer (NSCLC) with T790M acquired resistance.

A meta-analysis, about osimertinib in treating EGFR-mutated advanced NSCLC, showed that subgroup analysis in the AURA3 study suggested that osimertinib had a higher CNS response rate and prolonged CNS PFS compared to those of chemotherapy (9). However, osimertinib compared to first- and second-generation EGFR-TKIs. Data supporting the use of osimertinib in brain metastases are limited, although it had established better CNS activity in some preclinical models and clinical studies. There is no aggregate analysis regarding CNS metastases performed. Therefore, our meta-analysis will be the first systematic review to synthesize the results of published literature, efficiency comparison between osimertinib and other drug therapy, to provide more objective data for the optimal clinical use of osimertinib in CNS metastasis of NSCLC. We present the following article in accordance with the PRISMA Reporting Checklist (available at http://dx.doi.org/10.21037/apm-20-605).

The inclusion criteria are as follows: (I) the studies were trials performed about osimertinib in NSCLC patients with CNS metastasis confirmed by magnetic resonance imaging (MRI) or computed tomography (CT); (II) we can obtain response rate or other relevant data from the identified study to calculate; (III) written in English; and we only use the data of the most recent trial were used when the reported data were from the same patients. We have deleted all reviews, case reports, animal or duplicate publications.

Two authors independently extracted data and evaluated quality of the literature. We extracted the following information: first name of the author, year of publication, region, trial design, sub-category, EGFR mutant (%), age (years), sample size, dosage and length of osimertinib, tumor response, data of PFS. The NOS standard (10) was used as a research quality assessment standard. Low quality means that studies with a score no more than 4. The two authors resolved the problem, such a difference in opinion on a document, through mutual discussion and requested help from a third author if necessary.

All eligible studies were included. The heterogeneity between studies was evaluated with Q and I2 statistics (11). Studies with an I2 statistics of 0%, 25% and 50% represented no, low and moderate, respectively. High heterogeneity meant that I2 was more than 75%. According to the results of inter-study heterogeneity appraisal using Q and I2 statistics, Fixed-effects model was preferred to random-effects model when there was no statistically moderate heterogeneity (I2 >50%) between studies, and vice versa when there was high heterogeneity (12). We performed the integrated analysis to calculate the 95% confidence interval (CI), representing effect size. According to treatment lines, the analysis parameter included all data of response or survival. We also conducted subgroup analyses of objective response rate (ORR) and disease control rate (DCR) to the dose of osimertinib. In addition, we have performed sensitivity analysis by excluding the studies with the lowest-quality score. If necessary, the heterogeneity was also explored by subgroup. The potential publication bias was further validated by the Egger’s and Begg’s test (13). All statistical analyses were two sides. A P value less than 0.05 was considered statistically significant. This meta-analysis was conducted by the STATA version 14.0 (Stata Corporation, College Station, TX).

The PRISMA flow chart of this meta-analysis is shown in Figure 1. Duplicates and irrelevant studies and those without sufficient data were removed from a total of 504 publications. All investigators finally agreed to include 11 eligible (14-24) studies with 842 patients in our meta-analysis (Table 1). There are four RCTs, three single-arm trials, two retrospective studies and two real-world treatment studies. The eligible studies were published from 2017 to 2019, and average age (median or mean) in the included studies was ranged from 24.9 to 65 years. The sample size was ranged from 24 to 211. All studies included osimertinib 80 mg dose. 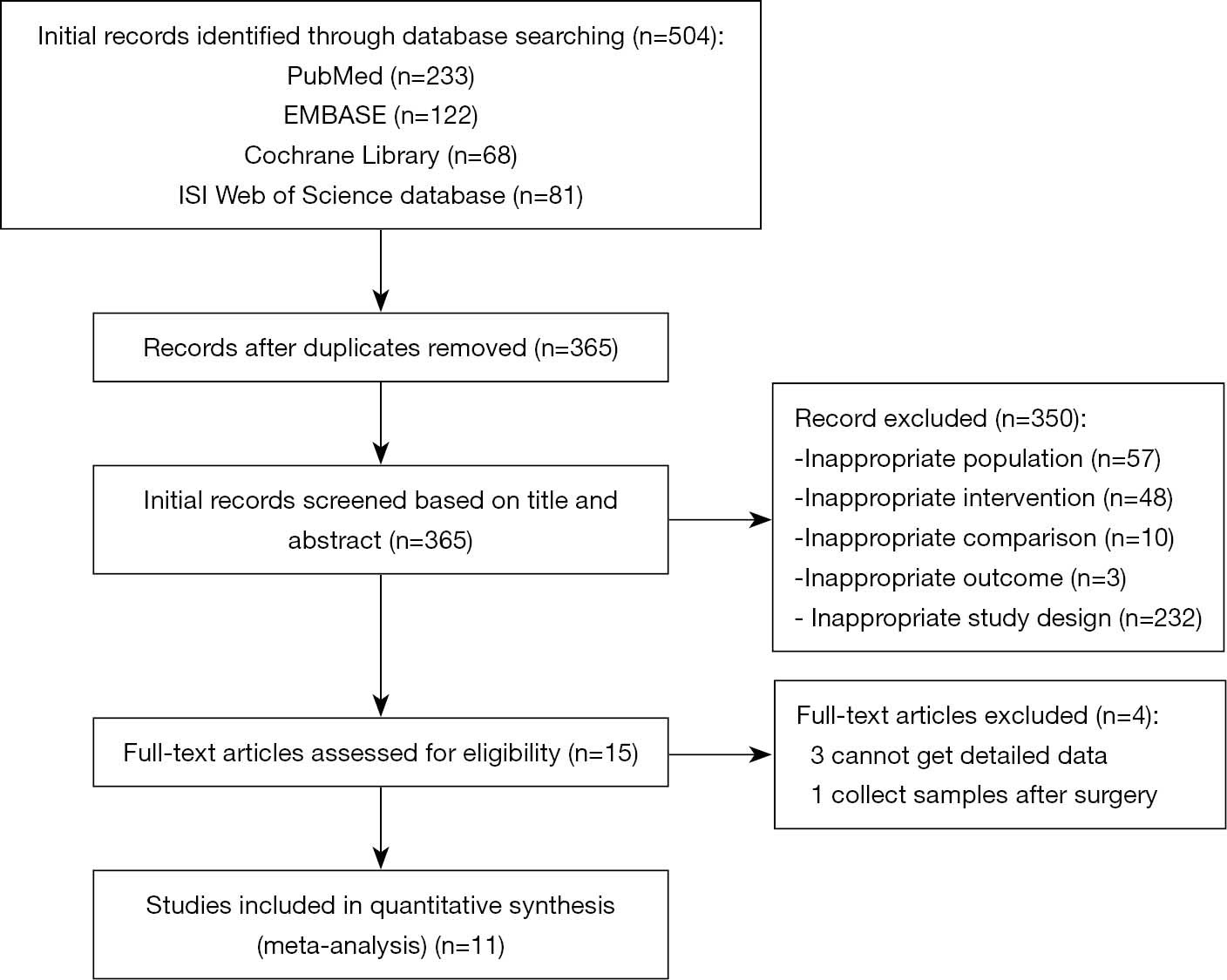 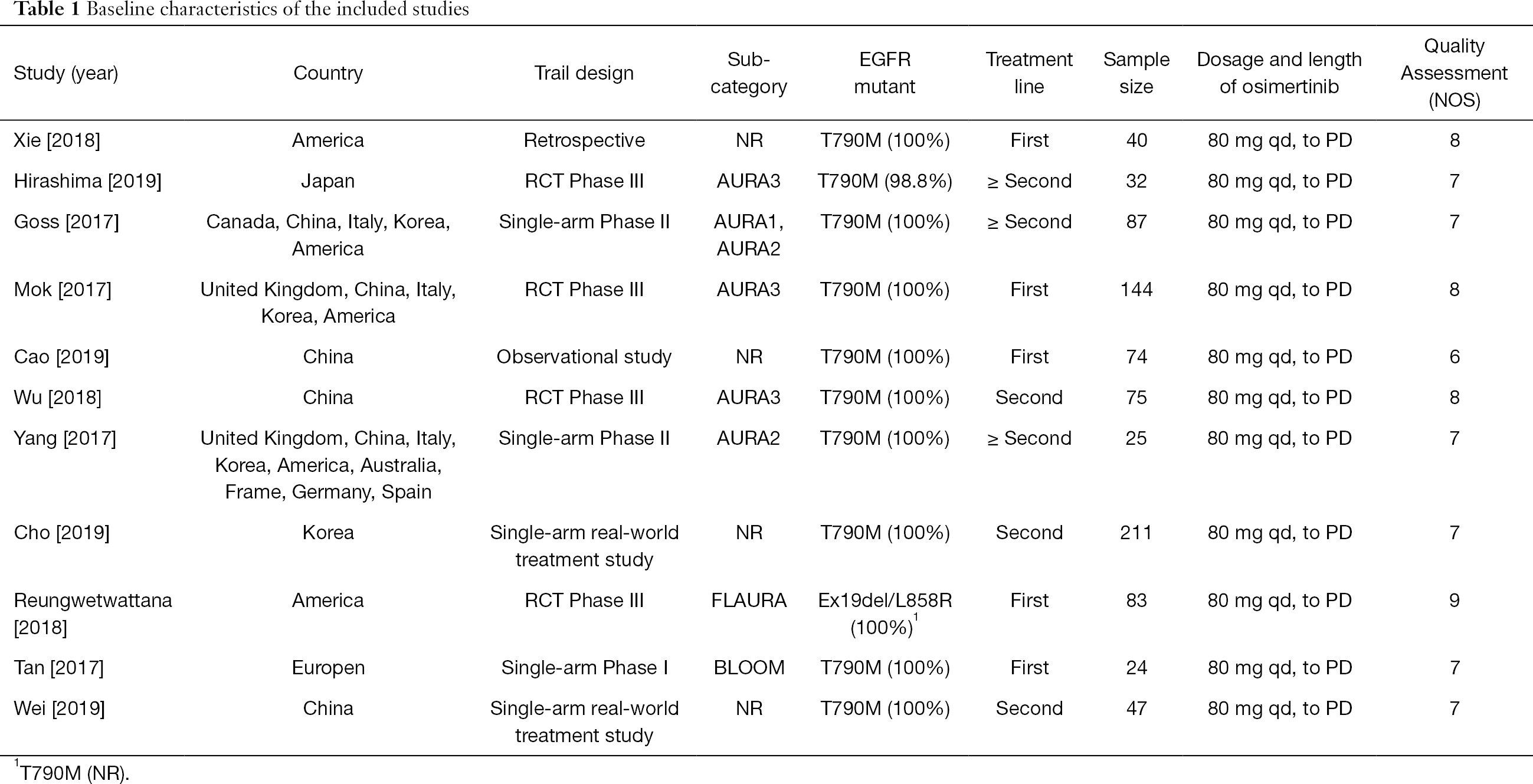 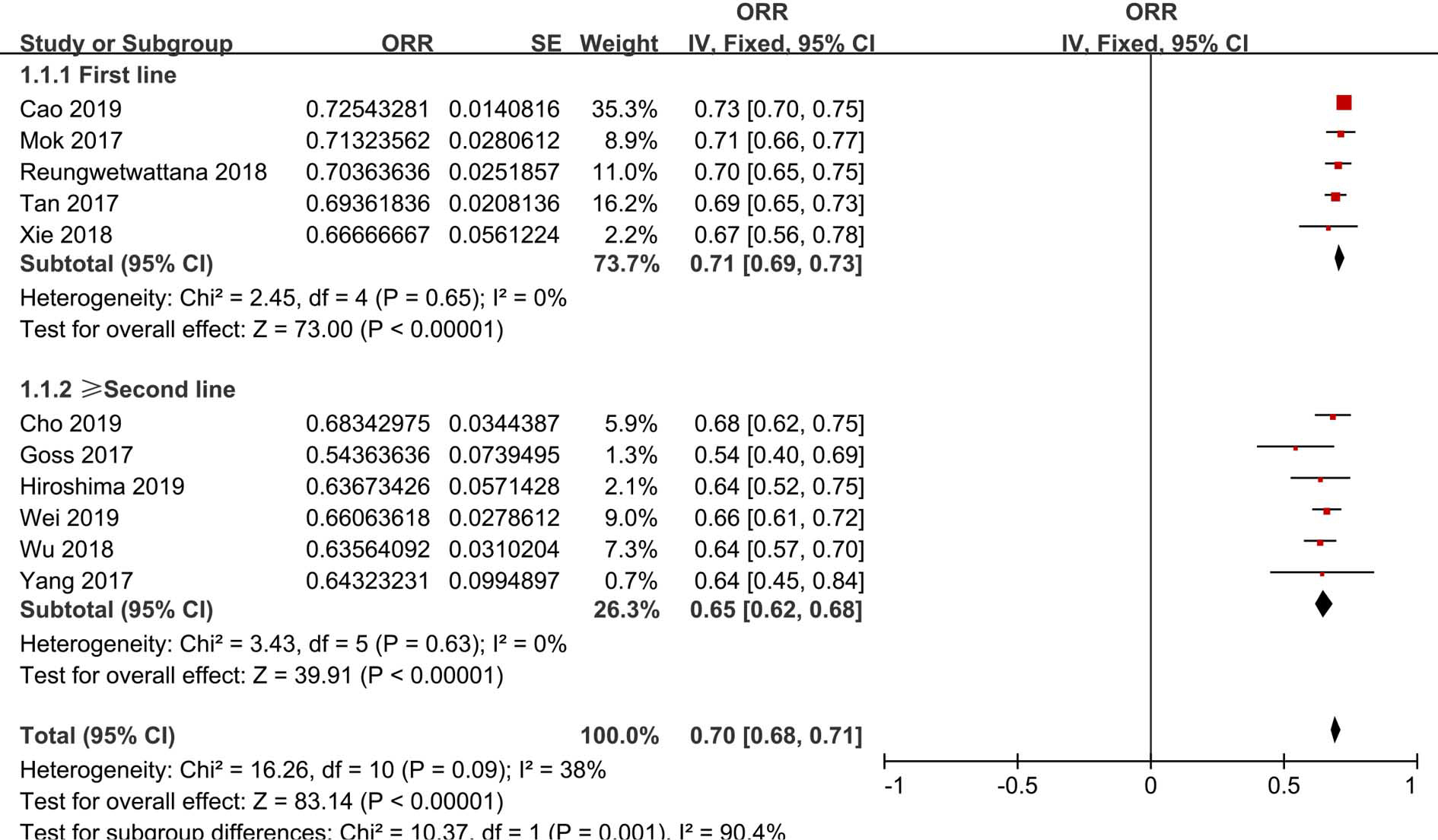 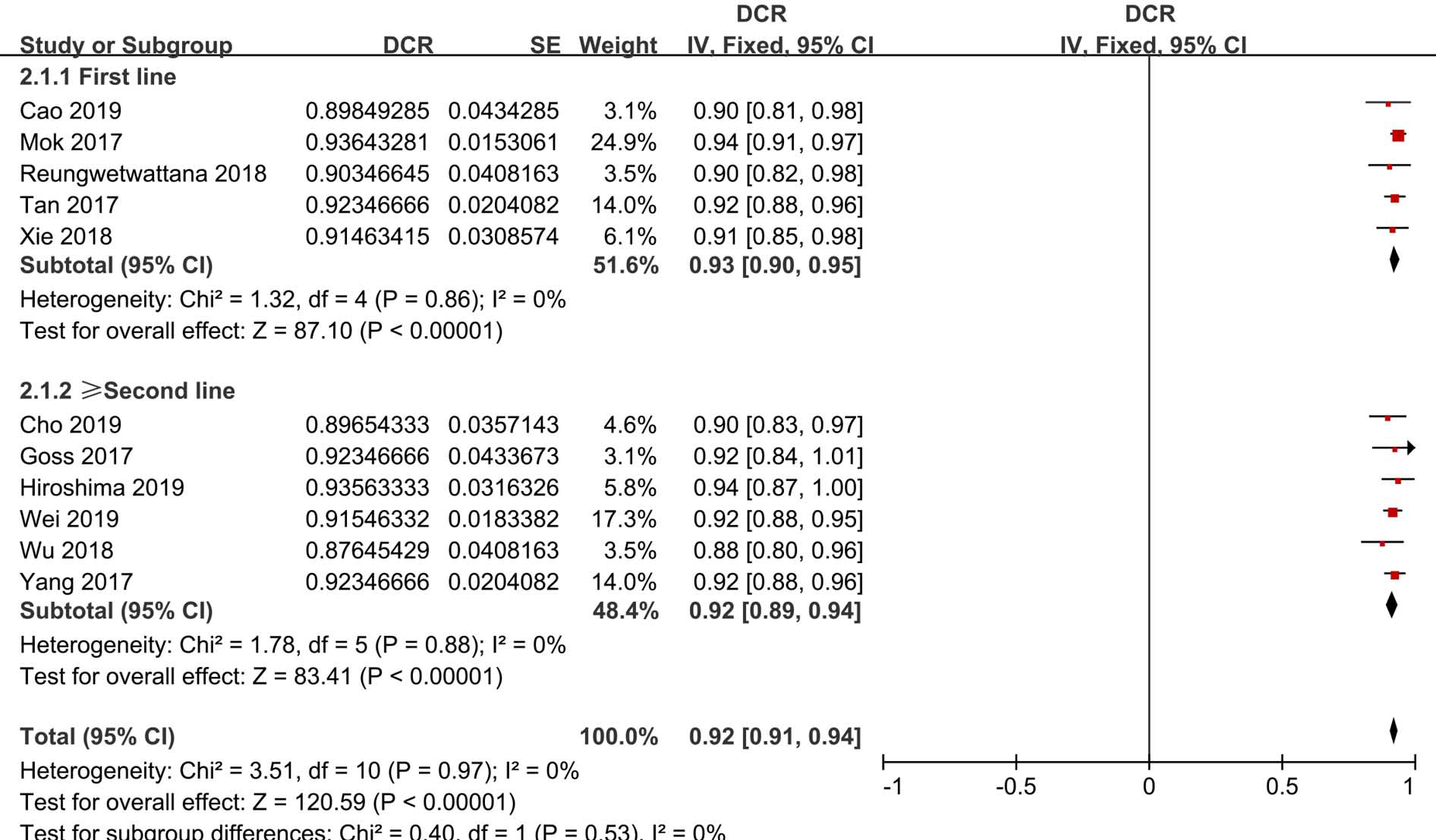 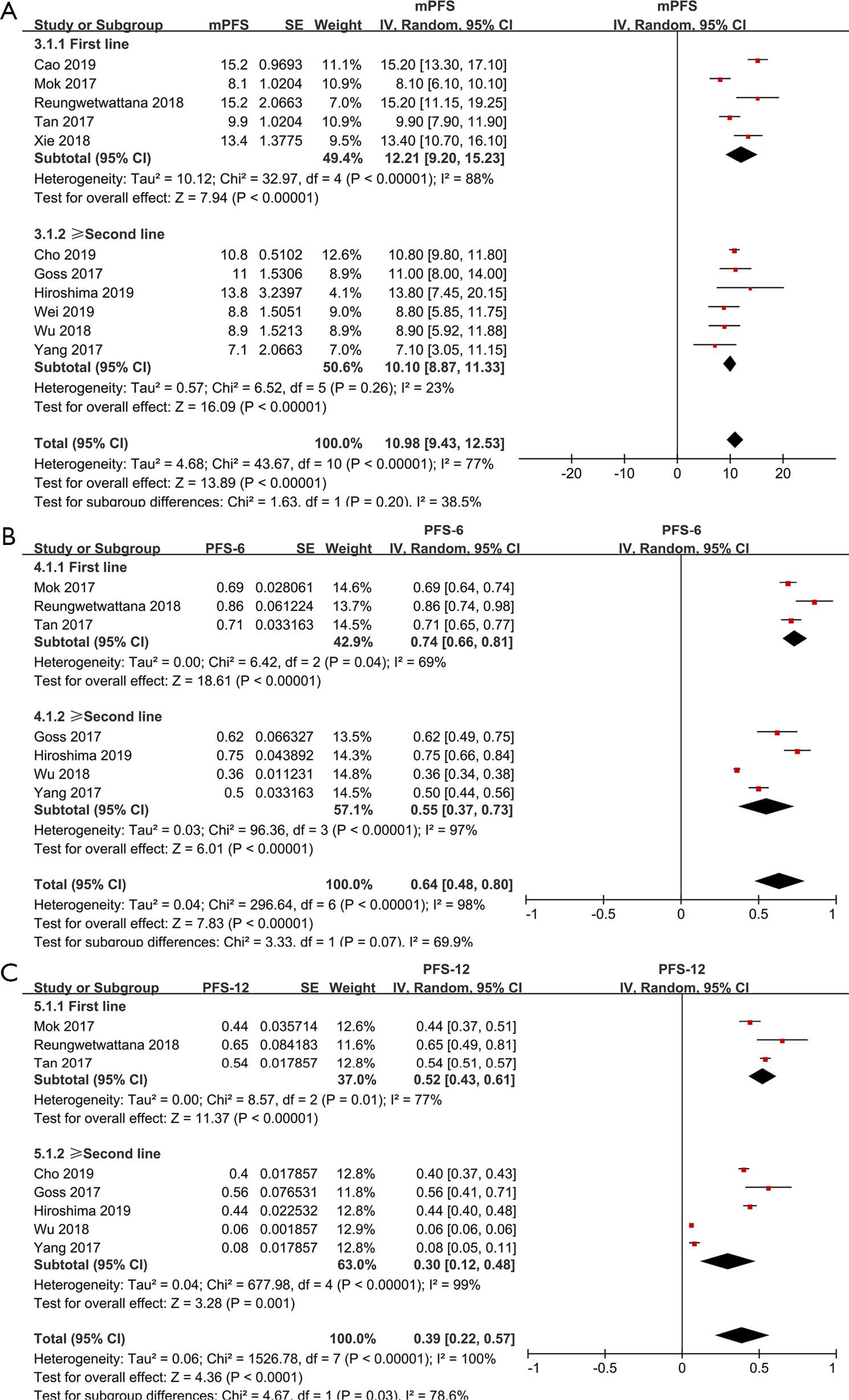 The publication bias in this meta-analysis was indicated by Egger’s test and Begg’s test. The results are shown in Table 2. Both two tests confirmed that no significantly different results emerged. The conclusions were not changed after adjustment for publication bias by using the trim and fill method (25).

Eleven research literatures, totally 842 patients, were involved by our study included to evaluate the efficacy and safety of osimertinib in treating CNS metastases in EGFR-mutant non small cell lung cancer (NSCLC) patients. The high ORR and DCR confirmed the efficacy of osimertinib in treating EGFR-mutated NSCLC with CNS metastases patients. Special attention should be paid to the higher ORR and DCR, 71% and 93%, in first-line therapy. And the combined median PFS of osimertinib for untreated patients was 12.21 months. Above data suggested that osimertinib provided good disease control on advanced EGFR-mutated NSCLC with CNS metastases, especially for untreated patients.

EGFR TKIs inhibit the proliferation of tumor cells via binding to EGFR specifically and show favorable therapeutic effects on advanced EGFR-mutated NSCLC. Tumors sensitive to EGFR TKIs (26,27) harbored activating mutations of EGFR (exon 19 deletion or L858R point mutation in exon 21). As shown above, osimertinib is of extraordinary efficacy both in ORR, DCR and PFS, and is better than afatinib with only median PFS: 8.2 months (5). Drug resistance largely limited the effectiveness of EGFR TKIs. Although both first-generation (gefitinib and erlotinib) and second-generation (afatinib) EGFR TKIs have demonstrable clinical efficacy in patients with EGFR-activating mutations, producing improvements in response rates (RRs), time to progression, and overall survival (OS), most patients develop acquired resistance following 10–14 months of treatment. The acquisition of a secondary T790M mutation in exon 20 of the EGFR gene caused many patients developed resistance to EGFR TKIs (28). We found that T790M mutation was observed in more than 50% of patients who developed resistance to an EGFR TKIs. However, the T790M status of patients’ CNS disease was not assessed. Published data suggest that T790M may occur less frequently in CNS metastases than in the primary tumour; therefore, some patients in our study may have had T790M-negative CNS metastases. In such patients, osimertinib would not be acting against the T790M resistance mutation. Neurological deficits and devastating clinical reality will be caused by the metastasis of cancer to the CNS, with an estimated survival time of less than one year.

As an orally taken third-generation EGFR-TKIs, Osimertinib can form an irreversible covalent bond with T790M or other EGFR mutations, via the cysteine-797 residue. Osimertinib also was the only one EGFR-TKIs, by Food and Drug Administration, approved for the treatment of patients with metastatic T790M mutation positive NSCLC, and displayed impressive activity in blood brain barrier transmigration. Yi et al.’s study suggested that osimertinib had impressive response rates in treatment-naive advanced NSCLC harboring EGFR-TKI sensitizing mutations with tolerable AEs (9), and the analysis by dose indicated that 80 mg of osimertinib once daily had higher ORR and DCR than the other doses. What’s more, osimertinib demonstrated consistently superior CNS efficacy compared with platinum-pemetrexed (17,19). For no treatment EGFR-mutated advanced NSCLC CNS patients, efficacy of osimertinib is also better (22,23). In trial, the frequency of events of CNS progression at the time of this analysis was lower in the osimertinib group than in the standard EGFR TKIs group (23). Compared with patients who had not receive prior brain radiotherapy or radiotherapy ≥6 months before osimertinib, the observed ORR was lower in patients who received radiotherapy ≥6 months before osimertinib (16,19,20). CNS efficacy of osimertinib was observed regardless of prior radiotherapy status. Some case reports had demonstrated that the clinical responses achieved on osimertinib may obviate the need for whole-brain radiation in some patients (29-31). Receiving radiation prior to starting osimertinib for patients with progressing brain metastases did not prolong PFS or OS (32). To minimize the risks of radiation-related toxicity, delaying radiation could be considered for some patients with EGFR-mutant NSCLC with brain metastases who initially respond to osimertinib (14).

Due to the blood-brain barrier, the efficacy of the standard cytotoxic chemotherapy (mainly platinum doublets or first- and second-generation EGFR-TKIs) for NSCLC is limited in the treatment of brain metastases (33). Osimertinib was effective in improving overall survival, post progression survival and brain metastasis-free survival in meta-analysis (34).

We acknowledge several limitations to this. First, to a certain extent, high heterogeneity limited test efficiency. Although several subgroup analyses were performed, significant heterogeneity was generally observed. Given the differences of the studies, there is a greater risk of potential selection and reporting bias. Second, limited number of studies and small sample size are limitations of our study, which might cause a result in invalid statistical analyses in those groups. Third, several sources of bias, such as inherent limitations, unmeasured confounding, and the typical bias in observational studies, may influence the observed results.

The results of our study indicate that most patients with CNS metastases would respond to osimertinib treatment in NSCLC harboring T790M mutations. Moreover, osimertinib has impressive antitumor activity in treatment-naive advanced NSCLC CNS metastases harboring EGFR-TKI-sensitizing mutations. However, more randomized clinical trials and additional fundamental researches are still needed to further clarify the beneficial population of different therapy and its possible mechanism, so as to better guide clinical treatment.

We sincerely thank all the reviewers and editors for their supportive suggestions.

Funding: This study was supported by the Key Medical Research Fund of Hebei Provincial Health Planning Commission (20160177 and 20180528).

Conflicts of Interest: All authors have completed the ICMJE uniform disclosure form (available at http://dx.doi.org/10.21037/apm-20-605). The authors have no conflicts of interest to declare.