Deep venous thrombosis (DVT) refers to the formation of a blood clot within a deep vein, resulting in vascular stenosis or occlusion (1). DVT is a common complication after surgery of lower limb fractures. However, studies have reported that only 10–17% of DVT patients present with obvious clinical symptoms, such as swelling of the lower limbs, local deep tenderness and dorsiflexion pain (2), which has led to high rates of missed diagnosis and misdiagnosis of DVT in the lower limbs. Therefore, early diagnosis and intervention for high-risk patients has considerable clinical significance.

At present, the commonly used methods for the diagnosis of DVT include intravenous color ultrasound, venography, and other imaging detection methods. Although these techniques show certain specificity and sensitivity, they cannot be used for the prediction of DVT occurrence. At present, there are many studies in China on the prognostic factors of patients with DVT after the operation of lower limb venous fracture, but there are few researches on the relevant prediction methods. Therefore, focusing on the perspective of molecular biological mechanism, this study aims to provide novel ideas for clinical treatment (3). Smooth muscle cells are critical structural components of the peripheral wall of blood vessels. Their phenotype is often changed in the process of vascular stability, where plasminogen activator inhibitor-1 (PAI-1) plays a key role in regulating their function (4). Fibrinogen (FIB) is a glycoprotein synthesized and secreted by liver cells, and is involved in coagulation and hemostasis. PAI-1 and D-Dimer (D-D) are both clinically recognized biochemical indicators of thrombotic diseases (5). In this study, the pre- and postoperative levels of PAI-1, FIB, and D-D were measured in patients with lower limb traumatic fractures to explore their predictive value for DVT and identify the risk factors for DVT. We present the following article in accordance with the MDAR reporting checklist (available at http://dx.doi.org/10.21037/apm-20-1604).

Clinical data of 63 patients who underwent surgical treatment in our hospital for lower limb trauma fractures from September 2018 to March 2019 were retrospectively analyzed. Patients were divided into a DVT group and a non-DVT group depending on whether DVT occurred within 2 weeks after surgery.

Inclusion criteria: (I) patients in the DVT group were required to meet the diagnostic criteria for DVT (6), namely that more than 95% of the veins could not be compressed or that there was no blood flow signal in the venous cavity as measured using ultrasound probe compression observation or extrusion of distal limbs; (II) patients were diagnosed with lower limb fractures and received surgical treatment; (III) the clinical data was complete with no missing information; (IV) no lower limb DVT was detected by color Doppler ultrasound prior to surgery.

Exclusion criteria: (I) patients with multiple fractures throughout the body; (II) patients with malignant tumors; (III) patients with DVT in the preoperative examination; (IV) patients with a history of pulmonary embolism or lower limb DVT; (V) patients with complications such as cardiovascular, respiratory, or other serious diseases. All procedures performed in this study involving human participants were in accordance with the Declaration of Helsinki (as revised in 2013). This study was approved by Sport Hospital Affiliated to CDSU (No. 2018-12). And all the patients were signed the informed consent.

Data collection and detection of PAI-1, FIB, and D-D levels

General and clinical data of all patients were collected including gender, age, body mass index (BMI), lower limb fracture site, diabetes status, preoperative platelet count, white blood cell count, preoperative coagulation, preoperative liver and kidney function, operation time, the amount of blood loss during the operation, whether the patient had received intraoperative blood transfusion, whether the patient had a postoperative infection, the amount of postoperative blood loss, postoperative anticoagulant use, and the levels of PAI-1, FIB, and D-D. The levels of PAI-1, FIB, and D-D were compared between the two groups.

Fasting venous blood (5 mL) was collected before and on the third day after surgery, and injected into a 0.2 mL test tube pretreated with 0.25% sodium citrate anticoagulant, centrifuged (3,000 r/min, 10 min), and then aliquoted. The concentrations of PAI-1, FIB, and D-D were detected using enzyme-linked immunosorbent assay (ELISA). The levels of PAI-1 and FIB were detected using the original matching detection kit (STAGO, France), and the D-D level was detected using the immunoturbidimetric method. The NycoCard-READER II multifunctional full quantitative detection instrument (Nycomed, Norway) and the matching test kit were operated in strict accordance with the operating instructions. The normal range of PAI-1 was 2.5–80 ng/mL; the normal range of FIB was 2.0–4.0 g/L; the normal range of D-D was 0–400 µg/L.

Results were analyzed using SPSS 20.0 statistical software (IBM, USA). The measurement data of clinical indexes was expressed as () and analyzed using the F/t test. The count data was expressed as a percentage (%) and analyzed using the Chi-square (χ2) test. The receiver operating characteristic (ROC) curve was used to assess the predictive value of PAI-1, FIB, and D-D levels in patients with DVT following lower limb fracture surgery. Logistic regression analysis was used for analyzing the related risk factors of DVT. The variables and assignments are shown in Table 1, with α=0.05 as the test standard. 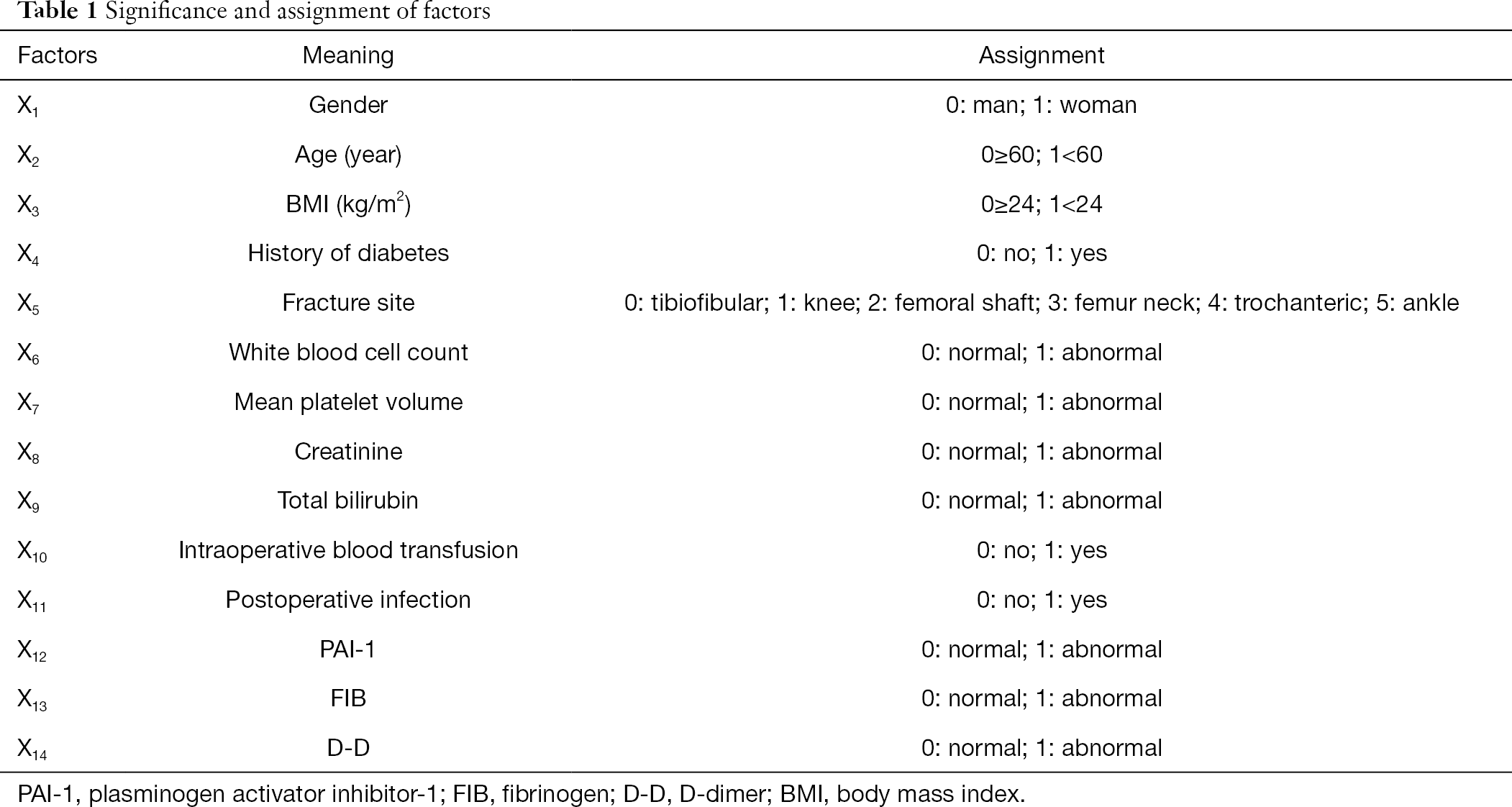 Comparison of the levels of PAI-1, FIB, and D-D between the two groups

The predictive value of PAI-1, FIB, and D-D for postoperative DVT in patients with lower limb fractures 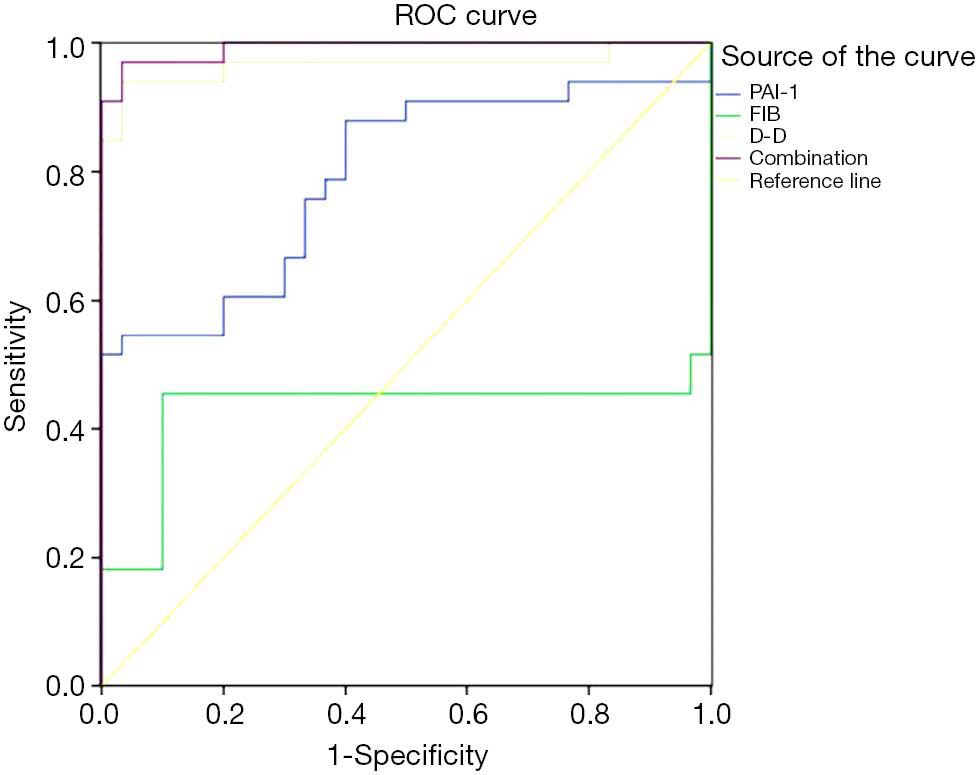 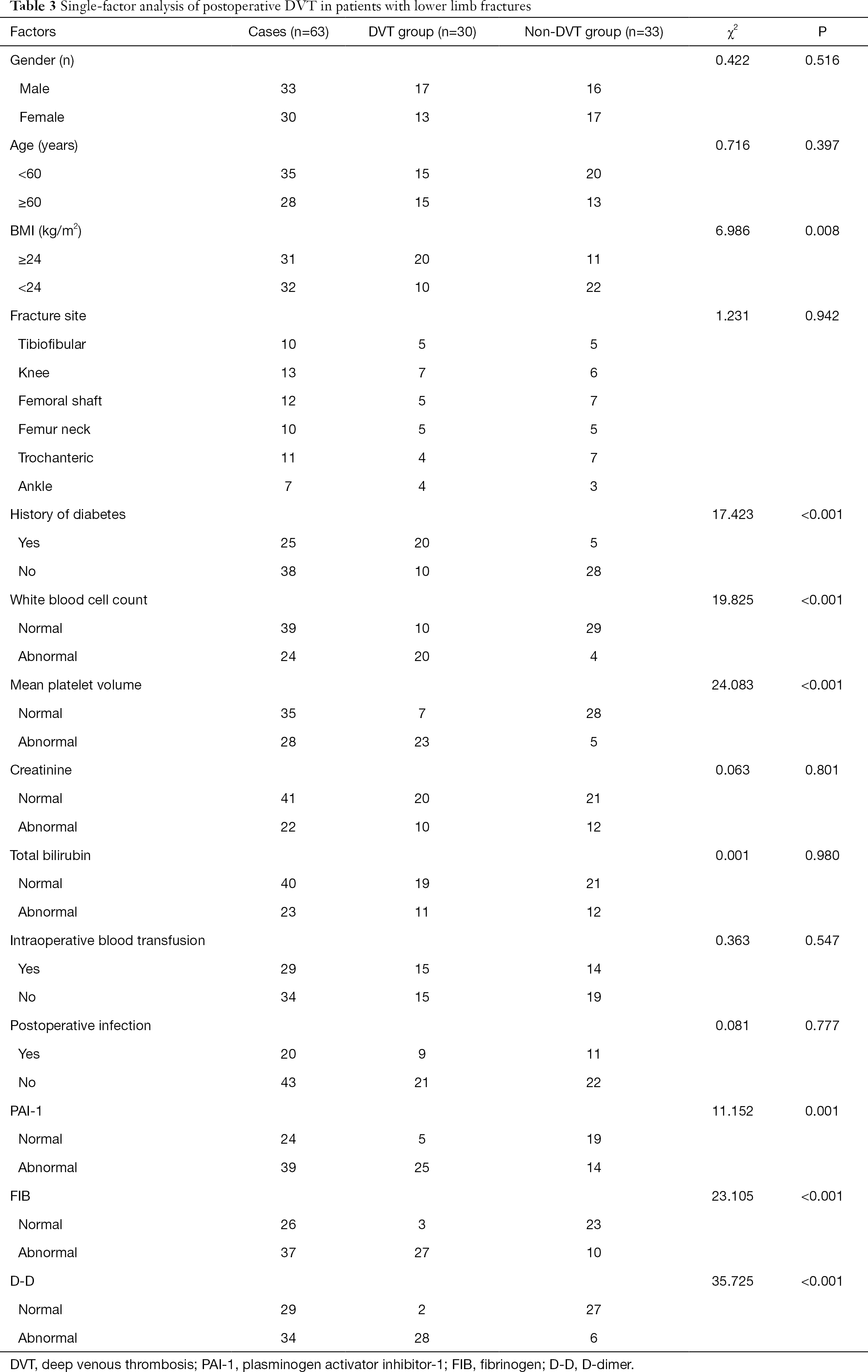 The risk factors and assignments of DVT following lower limb fracture surgery are shown in Table 1. According to the results of the single-factor logistic regression analysis, patients with a BMI ≥24 kg/m2, a history of diabetes, postoperative infection, abnormal white blood cell count, abnormal mean platelet volume, and abnormal levels of PAI-1, FIB and D-D had a higher postoperative DVT rate than those without these factors (P<0.05, Table 3).

DVT is an abnormal coagulation of blood in deep veins, resulting in vascular stenosis or occlusion (1). DVT is a common postoperative complication following lower limb fracture surgery, and affects venous return (7). Thrombosis often occurs at the state of braking (especially during orthopedic surgery, which may be related to the following factors: (I) reposition and fixation during surgery may cause damage to the veins around the fracture, resulting in hemodynamic changes; (II) preoperative fasting and water deprivation may cause the blood to be concentrated, which may in turn increase the risk of DVT; (III) early postoperative pain and local edema may restrict limb activity and slow the flow of blood; (IV) the postoperative stress response may increase platelet cohesion (8,9). Therefore, to improve quality of life, enhancing the postoperative risk assessment of DVT in fracture patients is crucial, in addition to early diagnosis and treatment (10).

The fibrinolytic system is a critical anticoagulant mechanism that can maintain the permeability of the blood vessel wall, and maintain the blood flow state and tissue repair (11). When fibrin clots are formed, the plasminogen activator can convert plasminogen into plasmin and trigger the process of fibrinolysis to degrade the fibrin clots into fibrin products. Of these products, only D-D cross-linked fragments can reflect thrombolytic activity after thrombus formation. Therefore, the quantitative detection of D-D is used clinically as a sensitive indicator for the diagnosis and screening of newly-formed thrombi (12). Related research has found that the level of D-D increases along with the hyperactivity of the fibrinolytic system (13). It is believed that the balance between coagulation and the fibrinolytic system in patients could possibly be assessed by detecting the changes in the D-D level, so as to correctly evaluate the necessity of anticoagulant treatment. The results of this study showed that the level of D-D was significantly increased in patients with DVT following lower limb fracture surgery (P<0.05), which also confirms the value of the D-D level in the clinical prediction of DVT.

PAI-1 is a specific inhibitor of both tissue-type and urokinase-type plasminogen activators. When the active form of PAI-1 enters the bloodstream, it works to suppress the aforementioned plasminogen activators, thereby reducing the amount of plasminogen in the blood. This in turn inhibits fibrin degradation, and creates favorable conditions for the formation of a thrombus. Walton (14) and Wolberg (15) reported that the composition of venous thrombosis is mediated by PAI-1. In this study, we found that the level of PAI-1 in the DVT group was significantly higher than the control group (P<0.05) (Table 2), which is consistent with the previous reports.

FIB is a protein that is synthesized in the liver and is involved in coagulation. It acts in the body to promote platelet aggregation and the growth, proliferation, and contraction of smooth muscle and endothelial cells, increase blood viscosity and peripheral resistance, and cause endothelial cell damage (16). In addition, it can also accelerate thrombosis by promoting the synthesis of collagen, deoxyribonucleic acid (DNA), chemotactic monocytes, and macrophages to migrate to the intima. Thus, monitoring of FIB levels is clinically significant for the diagnosis of cardiovascular diseases. Our study compared the pre- and postoperative levels of D-D and FIB in lower limb fracture patients, and found that the plasma levels in patients with DVT at 1 hour postoperatively were higher than those in the non-DVT group at the same time.

ROC curves were used to analyze the predictive value of PAI-1, FIB, D-D, and the combination of these three indicators for DVT following lower limb fracture surgery. As shown in Figure 1, the area under the curve of each index was 0.792, 0.429, 0.966, and 0.992, respectively. The detection of the combination of all three indicators exhibited the best predictive value, which further confirms that the combined detection of plasma PAI- 1, D-D, and FIB levels has clinical value for the diagnosis of DVT. Further analysis of the unconditional multivariate logistic regression model showed that postoperative infection, abnormal white blood cell count, and abnormal mean platelet volume were risk factors affecting postoperative DVT in patients with lower limb fractures (P<0.05). This phenomenon may be related to the damage of the blood vessel wall following an infection, which can further accelerate thrombosis. Thus, attention should be given to the treatment of infection following surgery for lower limb fractures (17). Abnormal levels of PAI-1, FIB, and D-D were also factors affecting postoperative DVT in patients with lower limb fractures (P<0.05), which further suggests that dynamic monitoring of PAI-1, FIB, and D-D levels may be a good predictive indicator of early postoperative thrombosis. However, it should be noted that the small sample size in this study presents a limitation. Larger sample sizes are required in future research.

In conclusion, there are numerous factors affecting postoperative DVT. In this study, we found that the levels of PAI-1, FIB, and D-D were significantly increased in patients with DVT following lower limb fracture surgery. Thus, early monitoring of PAI-1, FIB, D-D levels, and coagulation function is a good predictive indicator of postoperative thrombosis.

Reporting Checklist: The authors have completed the MDAR reporting checklist. Available at http://dx.doi.org/10.21037/apm-20-1604

Conflicts of Interest: All authors have completed the ICMJE uniform disclosure form (available at http://dx.doi.org/10.21037/apm-20-1604). The authors have no conflicts of interest to declare.

Ethical Statement: The authors are accountable for all aspects of the work in ensuring that questions related to the accuracy or integrity of any part of the work are appropriately investigated and resolved. All procedures performed in this study involving human participants were in accordance with the Declaration of Helsinki (as revised in 2013). This study was approved by Sport Hospital Affiliated to CDSU (No. 2018-12). And all the patients were signed the informed consent.