Sleep disordered breathing (SDB) has been widely recognized as a prevalent disorder and a recent update of the Wisconsin cohort study reported a disturbing increase in estimated prevalence of obstructive sleep apnea (OSA) over the past two decades, in association with an aging population and increasing obesity. However, there might be many undiagnosed patients (1-5). Although in-laboratory overnight polysomnography is regarded as a gold standard of examination for OSA, it is costly, labor-intensive, and has limited accessibility, and often has long waiting times (6,7). To resolve these issues, many laboratories have prompted a search for alternatives that could facilitate the diagnosis of OSA (8,9). Therefore, many types of portable monitoring devices have been developed for in-home screening and diagnosis of OSA.

In general, devices and techniques for detecting SDB are classified into four types (10). Type 1 indicates attended full polysomnography equipped with a minimum of seven channels, generally including electroencephalogram, electrooculogram, chin electromyogram, pulse rate or electrocardiogram, respiratory effort, airflow, and oxygen saturation in the laboratory. Type 2 indicates a minimum of seven channels in an unattended setting. Type 3 indicates test using a minimum of four channels, including respiratory movement, airflow, heart rate or electrocardiogram, and oxygen saturation. Type 4 indicates a test with a single or two parameters, usually using oxygen saturation plus airflow or pulse rate. Currently, Type 3 and 4 devices are called portable cardio-respiratory monitors or home sleep apnea test (HSAT) and can be used as a screening tool for OSA or as an aid for diagnosis of OSA for patients with a high pretest probability of moderate to severe OSA (11-13). Thus, many HSAT devices have been developed for clinical use. Among them, Apnomonitor® (Chest M.I.Inc., Tokyo, Japan), a Type 4 HSAT device, developed in Japan, has been used widely, and is one of the most popular HSAT devices. However, although some data have shown the utility of Apnomonitor® for screening of OSA, clinical utility of the current Apnomonitor® series device, Apnomonitor Mini®, is not verified (14,15). Thus, the purpose of this study was to assess the clinical utility of the Apnomonitor Mini®.

We present the following article in accordance with the STROBE reporting checklist (available at http://dx.doi.org/10.21037/apm-20-384).

Three hundred and eighty-seven consecutive patients who underwent overnight polysomnography (Toranomon Hospital, Tokyo, Japan) following overnight HSAT from January 2009 to June 2010 and finally diagnosed with OSA by polysomnography were enrolled. HSAT had been done within 1 month prior to the in-laboratory polysomnography. Exclusion criteria were: (I) patients who underwent split night study for the diagnostic polysomnography; (II) patients with incomplete HSAT (i.e., loss of pressure sensor signal or oximetry signal ≥50% of total recording); (III) patients with predominant central sleep apnea by polysomnography; and (IV) patients receiving oxygen therapy for the respiratory failure or mechanical ventilation. The trial was conducted in accordance with the Declaration of Helsinki (as revised in 2013). The Toranomon Hospital Ethics Committee approved this study (No. 1877), and all participants provided written informed consent.

We performed the sleep test using a type 4 HSAT device, Apnomonitor Mini® (CHEST M.I. Inc., Tokyo, Japan), which is easy to use and small, and comprises a combined thermistor and nasal pressure transducer signals, a finger pulse oximeter, a microphone to monitor tracheal sounds, a position detector and the integrative unit (Figure 1). Each sensor was connected to the integrative unit to record the following parameters: airflow signal, snoring, percutaneous saturation (SpO2), pulse rate, and body position. 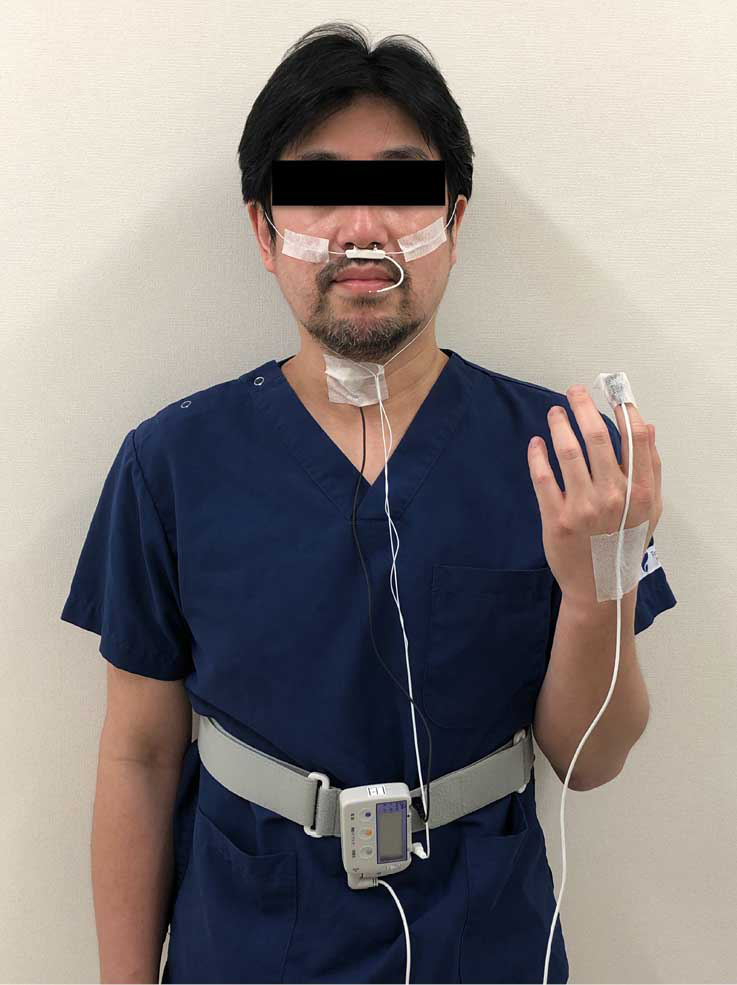 The Apnomonitor Mini® detected apneas or hypopneas by the waveform peak of respiration when the reference waveform was recognized as the averaged amplitude during the 2-min interval just prior to the monitoring. Apnea was defined as a reduction in airflow through the nose greater than 75% of baseline, lasting at least 10 seconds. Hypopnea was defined as a reduction of airflow or in thoracoabdominal movement greater than 50% of baseline, lasting at least 10 seconds. These respiratory events were automatically scored, and the apnea-hypopnea index (AHI) was calculated as the frequency of apneas and hypopneas per hour of recording (AHI-HSAT). Minimum levels of oxyhemoglobin saturation (SpO2) and the number of desaturations per hour of recording, expressed as the oxygen desaturation index (ODI), were also computed. In the present study, desaturations were defined as ≥4% and ≥3% decrease in the saturation level (4% ODI and 3% ODI, respectively). The percentage of time that SpO2 was less than 90% was also expressed as a percentage of total recording time. After acquisition, data were processed using a personal computer. An experienced technician, blinded to the information regarding the subjects, performed the scoring manually. Subsequently, a sleep specialist, also blinded to the subject information, double-checked scored data.

Polysomnography was performed using a digital polygraph (SomnoStar α Sleep System; Sensor Medics Corp., Yorba Linda, CA) monitored by the sleep technicians in our sleep center (Toranomon Hospital, Tokyo, Japan). The accepted definitions and scoring methods for the diagnostic polysomnography i.e., apnea was defined as a cessation of airflow for at least 10 seconds; hypopnea was defined as a reduction of airflow by more than 50% for at least 10 seconds or discernible reduction of airflow with desaturation or an arousal (16-18). In each case, the respiratory events were manually scored; the following parameters were obtained from the polysomnography and the AHI was calculated per hour of sleep (AHI-PSG). All HSAT using Apnomonitor Mini® have been performed on a different day, before polysomnography, within 1 month. An experienced technician who was blinded to the information regarding HSAT manually scored all polysomnography recordings. Subsequently, a sleep specialist who was blinded to the information regarding HSAT double-checked scored data.

Data are expressed as the mean ± standard deviation (SD) or median [interquartile range (IQR)] for continuous variables. Data derived from HSAT devices were compared with those derived from polysomnography using the t-test, Wilcoxon rank-sum test, correlation analysis, and Bland and Altman plots (19). The Bland and Altman plot is a graphical representation of the observed differences between AHI-PSG and AHI-HSAT. Sensitivity, specificity and accuracy were calculated according to the value of AHI-PSG ≥5 and ≥30. Accuracy was calculated as total number of subjects in true positives plus total number of subjects in true negatives divided by the total number of all subjects. The best cut-off values of AHI-HSAT for detecting AHI-PSG ≥5 and ≥30 was identified by a receiver operating characteristic (ROC) curve analysis. In the ROC curve, the higher the resulting area under the curve (AUC), the higher the discriminatory power of the cut-off values. In addition, we performed subgroup analyses including severity of OSA category (severe OSA or not, cutoff, AHI < or ≥30) and presence or absence of obesity [body mass index (BMI) < or ≥25 kg/m2]. The first-order interactions in regression models were examined by entering interaction terms between the AHI-HSAT and the abovementioned subgroup variables. The P value of less than 0.05 was taken as the level of statistical significance. Statistical analysis was performed using SPSS statistical software (SPSS 25.0; SPSS Inc., Chicago, IL, USA). 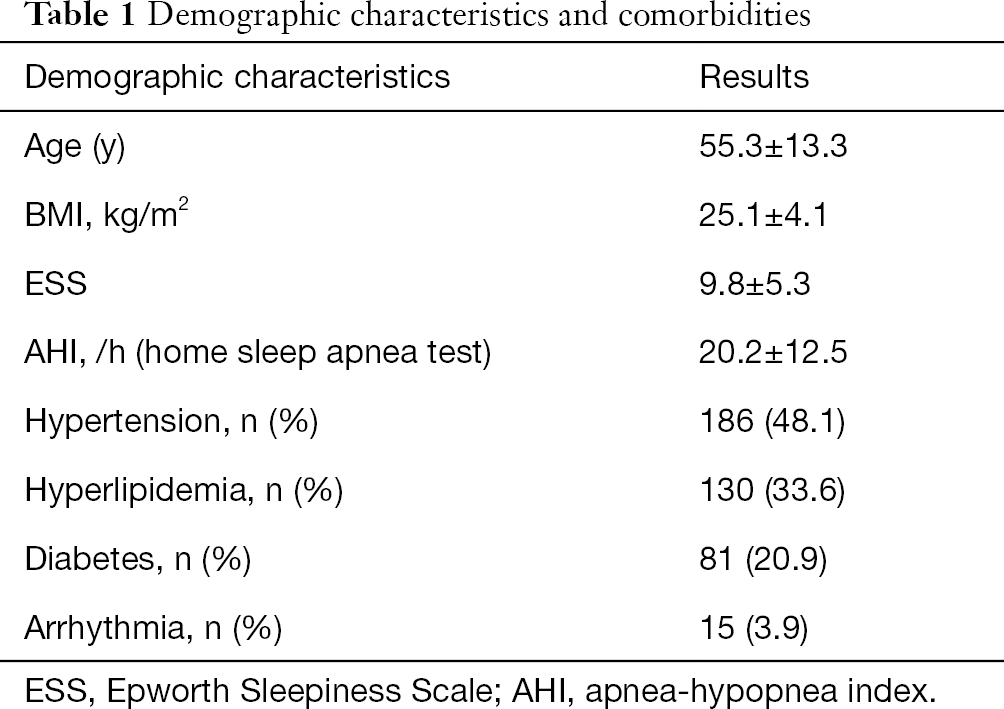 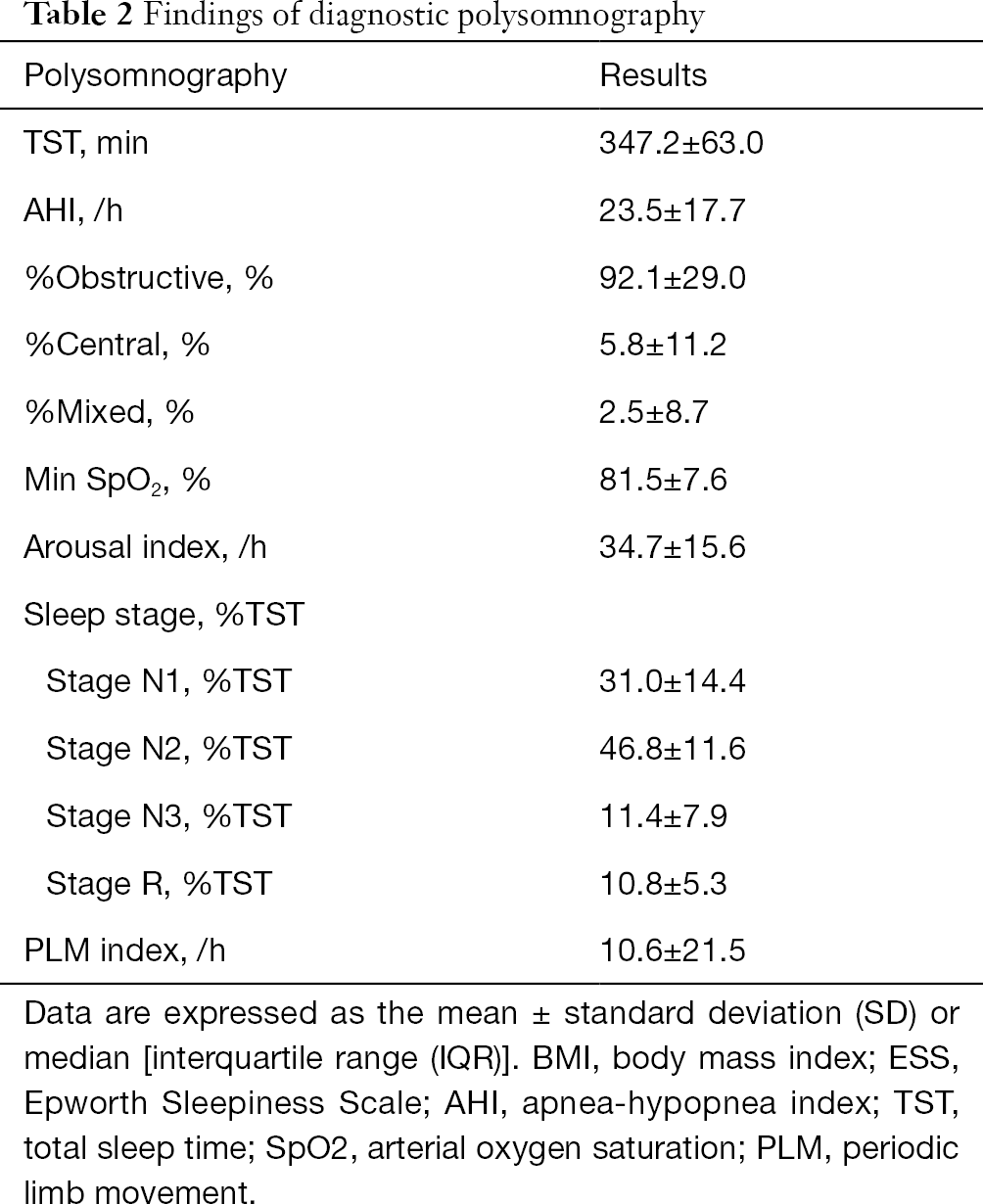 These findings provide several novel insights into the clinical utility of the current Type-4 HSAT device, Apnomonitor Mini®, which is easy to use, small and widely used in Japan. First, AHI-HSAT by Apnomonitor Mini® correlated significantly with AHI-PSG even though they were performed separately (within a gap of 1-month). Second, the best cut off AHI-HSAT value for detecting AHI-PSG ≥5 was 10.3 events/h, and for detecting AHI-PSG ≥30 was 24.5 events/h, determined with acceptable sensitivity and specificity. Finally, correlations between AHI-HSAT and AHI-PSG remain significant in severe/non-severe OSA or obese/non-obese subgroups although slightly better correlations were observed in patients with severe OSA compared with their counterparts. Taken together, screening using Apnomonitor Mini® provides useful information as HSAT, and AHI-HSAT ≥10 events/h and AHI-HSAT ≥24 events/h should be applied to screen even mild OSA and severe OSA, respectively. In addition, Apnomonitor Mini® can be used particularly in patients with high pretest probability for severe OSA.

The lack of sleep variables in type 4 device studies in patients with suspected OSA has several potentially relevant limitations. Thus, there is a possibility that AHI-HSAT might be underestimated AHI-PSG as mentioned earlier. Indeed, in the present study, mean AHI-HSAT was smaller than mean AHI-PSG. However, mean difference in AHI was only 3.2 with acceptable limit of agreement, and acceptable specificity and sensitivity to detect AHI-PSG ≥30 events/h. Considering that correlation between AHI-HSAT and AHI-PSG was more prominent in patients with severe OSA in the present study, patients with severe OSA based on AHI-PSG can be sufficiently detected by HSAT using Apnomonitor Mini®. In 2017 AASM clinical practice guideline for HSAT recommended that HSAT might be uses as an alternative to polysomnography for the diagnosis of OSA only in patients with a high pretest probability of moderate to severe OSA (16). Our data were in line with this.

Despite no significant interaction regarding obese/non-obese subgroups and AHI correlation, positive correlation was more prominent in obese patients (i.e., BMI ≥30) compared to non-obese patients (i.e., BMI <30). Obesity is one of the important co-existing condition of OSA, and in general, is regarded as a first step for OSA screening (3). Thus, it is important for obese subjects to determine whether they really have severe OSA requiring treatment. To this end, despite no significant interaction between obese/no-obese patients, a more prominent correlation between AHI-HSAT and AHI-PSG was observed in this study. Because obese subjects are more likely to have comorbidities such as hypertension and cardiovascular disease, and because reduction of blood pressure, and improvement of some cardiovascular parameters can be observed by the treatment of OSA, their OSA should be identified and be referred for immediate treatment. Physicians should recognize the clinical utility of Apnomonitor Mini® for screening of OSA as shown in the present study.

Funding: This study was partially supported by the Okinaka Memorial Foundation.

Reporting Checklist: The authors have completed the STROBE reporting checklist. Available at http://dx.doi.org/10.21037/apm-20-384

Conflicts of Interest: All authors have completed the ICMJE uniform disclosure form (available at http://dx.doi.org/10.21037/apm-20-384). The authors have no conflicts of interest to declare.

Ethical Statement: The authors are accountable for all aspects of the work in ensuring that questions related to the accuracy or integrity of any part of the work are appropriately investigated and resolved. The trial was conducted in accordance with the Declaration of Helsinki (as revised in 2013). This study was approved by ethics board of the Toranomon Hospital (No. 1877) and informed consent was taken from all the patients.