Circulating dehydroepiandrosterone sulfate level and cardiovascular or all-cause mortality in the elderly population: a meta-analysis

Dehydroepiandrosterone sulfate (DHEAS), also known as androstenolone sulfate, is an endogenous androstane steroid that is present in both male and female. Almost all DHEAS is synthesized in the adrenal cortex and only minimal level of DHEAS is produced by the testes (1). DHEAS can be converted into testosterone, androstenedione, and estrogen (2). Men have higher circulating DHEAS level than women (3). The production of DHEAS peaks in young adults and decreases with advancing age in both genders (4). Age-related decline in DHEAS level has been implicated in the aging process (5), which means DHEAS may play an important role in the longevity (6).

Low level of serum/plasma DHEAS has been linked to impaired survival prognosis in the patients with cardiovascular disease (7,8), hemodialysis (9), and chronic obstructive pulmonary disease (10). There are several possible explanations for low circulating level of DHEAS being associated with cardiovascular mortality, including vascular inflammation (11), platelet aggregation (12), oxidative stress (13), and coronary atherosclerosis (14). However, the association between baseline DHEAS level and cardiovascular or all-cause mortality has yielded conflicting findings in the general population (15). Differences in baseline age may partly contribute to the contradictory finding of prior studies.

Relevant studies were identified by a comprehensive search of PubMed and Embase databases from their inceptions to 4 February, 2019. Literature search was performed using a combination of the following keywords without language restriction: “dehydroepiandrosterone sulfate” AND “mortality” OR “death”. In addition, we also manually scanned the reference lists of pertinent articles for any possible missing studies.

Inclusion criteria were the follows: (I) longitudinal observational studies that performed in the elderly population; (II) baseline serum/plasma DHEAS level as exposure; (III) outcome of interests were cardiovascular or all-cause mortality; (IV) provided multivariable-adjusted risk estimate of cardiovascular or all-cause mortality for categorical analysis of circulating DHEAS level. Studies were removed according to the following exclusion criteria: (I) participants not restricted in the elderly general population; (II) outcome measures were not of interest; (III) reporting risk estimate by continuous DHEAS level (per SD, per quartile or per log change in DHEAS); (IV) only provided unadjusted risk estimate of cardiovascular or all-cause mortality. Two authors independently assess the eligibility of the retrieved articles based on the above inclusion and exclusion criteria.

Data extraction and quality assessment were conducted by two independent authors. The following information were extracted from the eligible studies: surname of the first author, year of publication, geographic region, study design, sample sizes, proportion of women, mean age or age range at baseline, comparison of DHEAS category, number of endpoints, follow-up duration, fully adjusted risk ratio (RR), hazard ratio (HR), odds ratio (OR) with their corresponding 95% confidence intervals (CI), and adjustment for confounding factors. A 9-star Newcastle-Ottawa Scale (NOS) for cohort studies was applied to assess the methodological quality of the included studies (17). Studies awarding a score of ≥7 stars were deemed as high-quality. Discrepancies in data extraction and quality assessment were resolved by discussion with a third author.

If the studies reported the lower DHEAS level as the reference category, we recalculated risk estimate taking the higher DHEAS as a reference group. HR and OR were directly deemed as the same measure of RR in this meta-analysis. Statistical heterogeneity across studies was checked using the Cochran’s Q test (significance set at P<0.10) and I2 statistic (significance set at I2≥50%). Meta-analyses were conducted using a random effect model in the presence of statistical heterogeneity or a fixed-effect model without statistical heterogeneity. Publication bias was scheduled for the Begg’s rank correlation (18) and Egger’s linear regression test (19). Subgroup analyses were planned by the sample sizes (>1,000 vs. <1,000), geographic region (Europe vs. others), length of follow-up (>5 vs. ≤5 years), gender (women vs. men), and cutoff value of DHEAS level (>2 categories vs. single). We performed leave-out one study sensitivity analysis at each turn to investigate the impact of individual studies on the overall pooled risk estimate. All statistical analyses were carried out using STATA 12.0 (Stata, College Station, TX, USA).

Our initial literature search yielded 803 records, of which 376 were left after removal of duplicates. Of these, 40 full-text potentially articles were assessed for eligibility and 6 studies (20-25) were finally included in this meta-analysis. A flowchart outlining our selection process is shown in Figure 1. 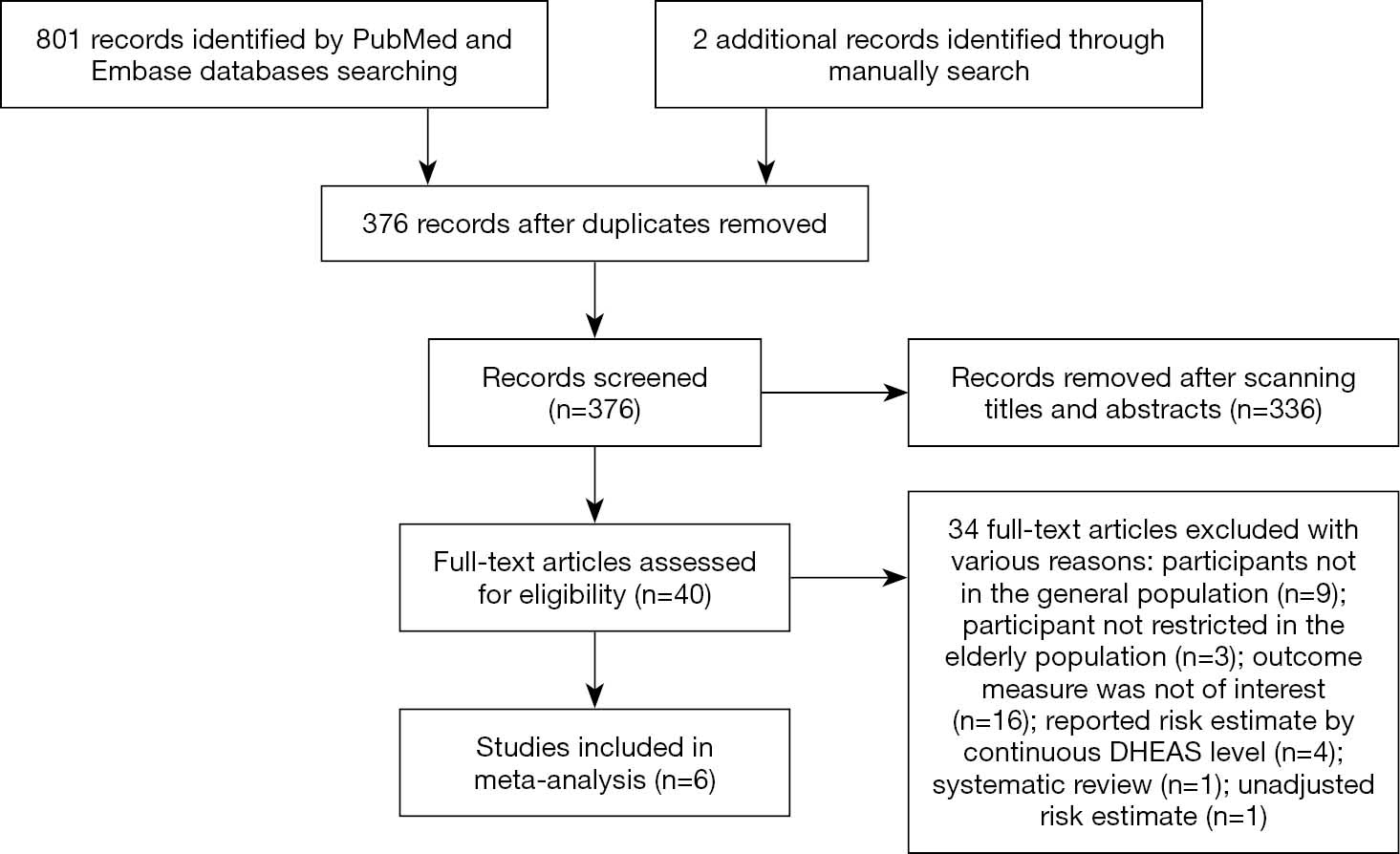 Table 1 summarizes the general characteristics of the included studies. In total, this meta-analysis included 6,744 participants, with 1,176 all-cause death and 282 cardiovascular death events. Sample size of participants varied from 214 to 2,644 individuals. The age of participants was 65 years or over. These included studies were published from 2001 to 2012. All the included studies were prospective cohort designs. Study populations came from the United Kingdom (20), Sweden (23), Italy (22,25), United States (21), and Japan (24). The duration of follow-up ranged from 2.7 to 8.0 years. For methodological quality assessment, five studies (83.3%) were graded as high quality. 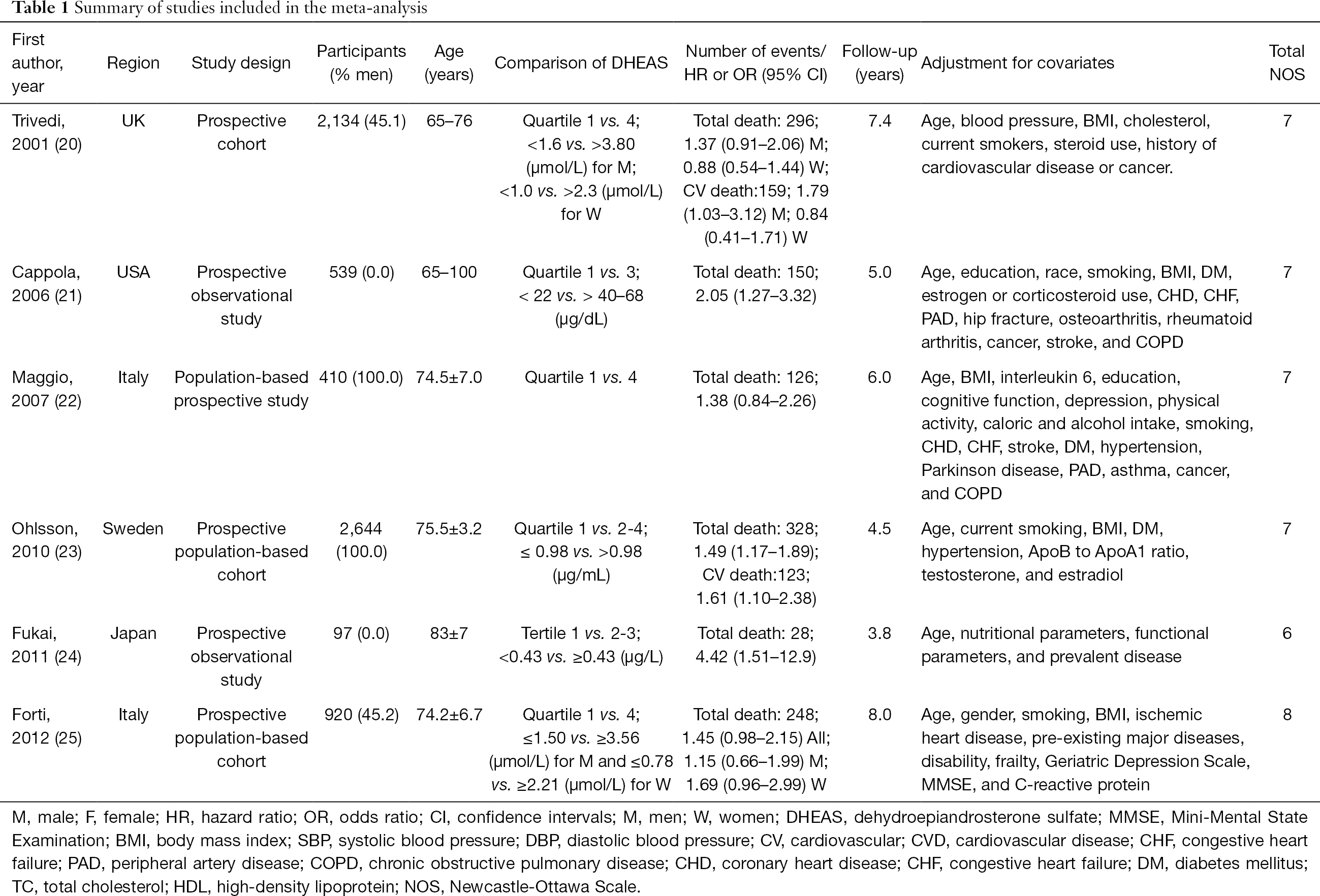 All the included studies reported the association between circulating DHEAS level and risk of all-cause mortality. As shown in Figure 2, a fixed-effect model meta-analysis showed the pooled RR of all-cause mortality was 1.46 (95% CI: 1.25–1.70) when compared the lowest to the reference higher category of DHEAS level. There was no significant heterogeneity between studies (I2=41.6%; P=0.113). Publication bias was not observed based on the results of Begg’s test (P=1.000) and Egger’s test (P=0.489). Sequential exclusion of any single study minimally altered the overall pooled risk estimate (RR range: 1.41–1.58). Stratified analyses indicated that the significant association of low serum DHEAS level with all-cause mortality risk was consistently found in each subgroup except for the single cutoff DHEAS comparison subgroup (Table 2). 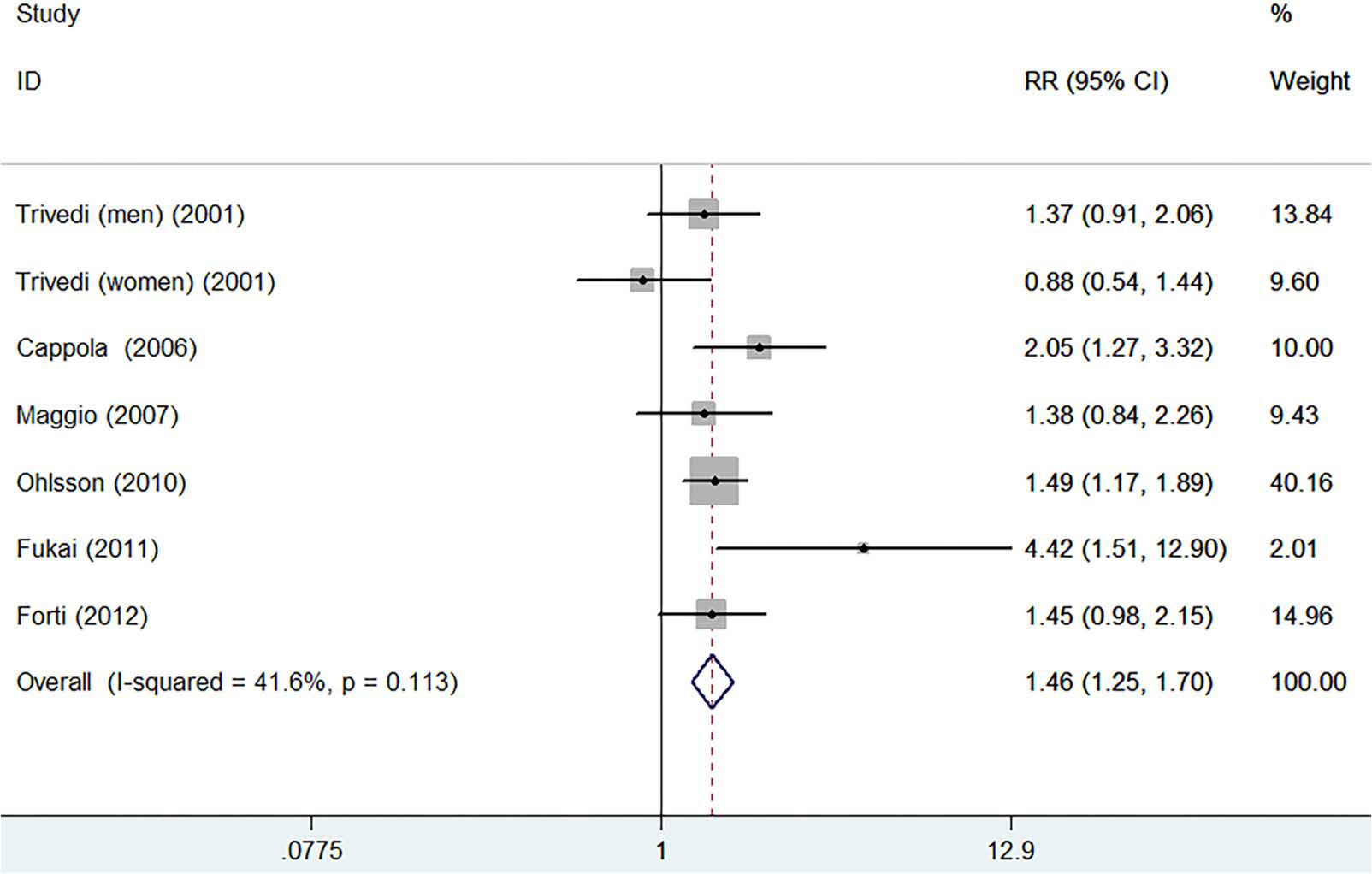 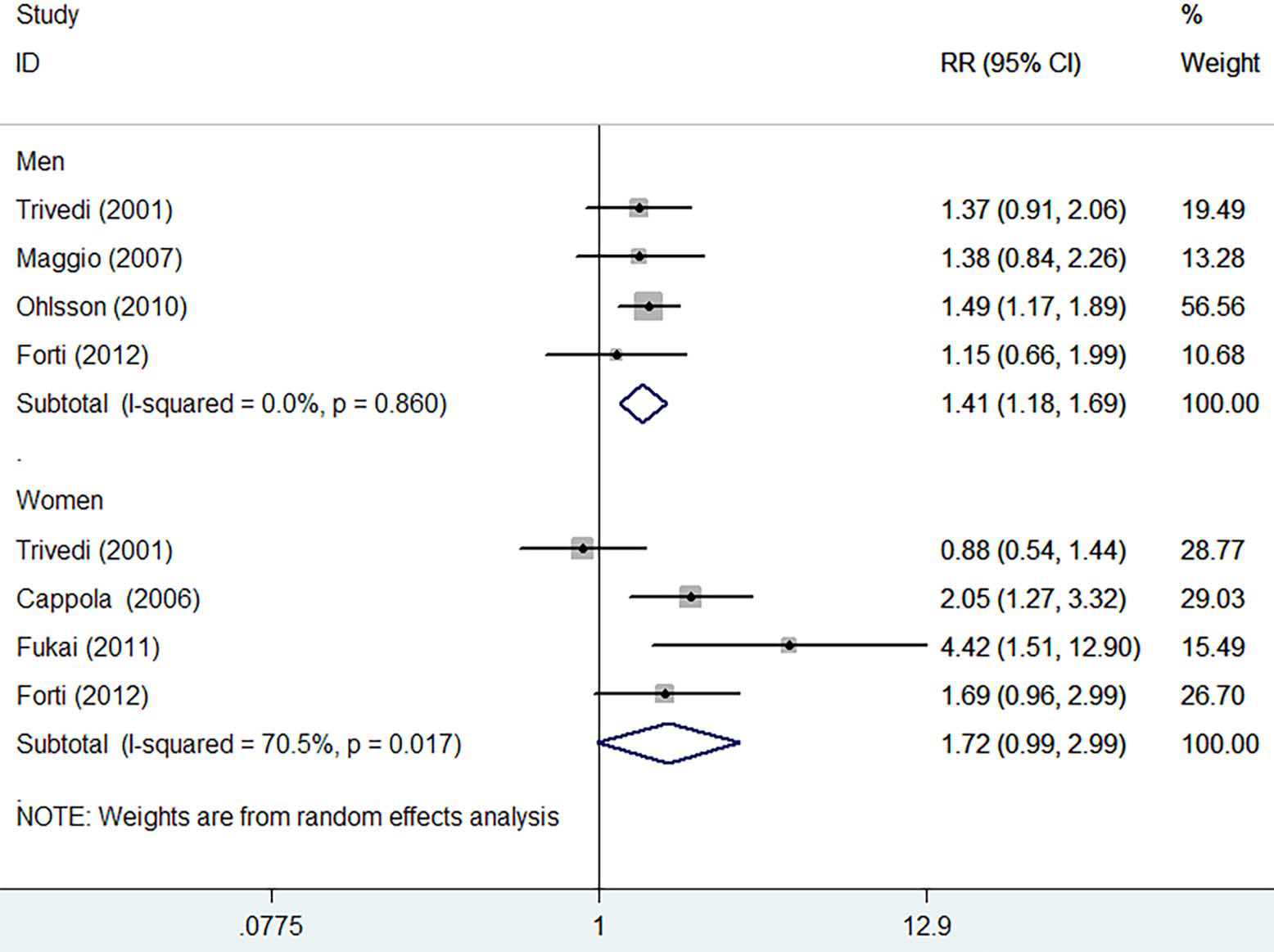 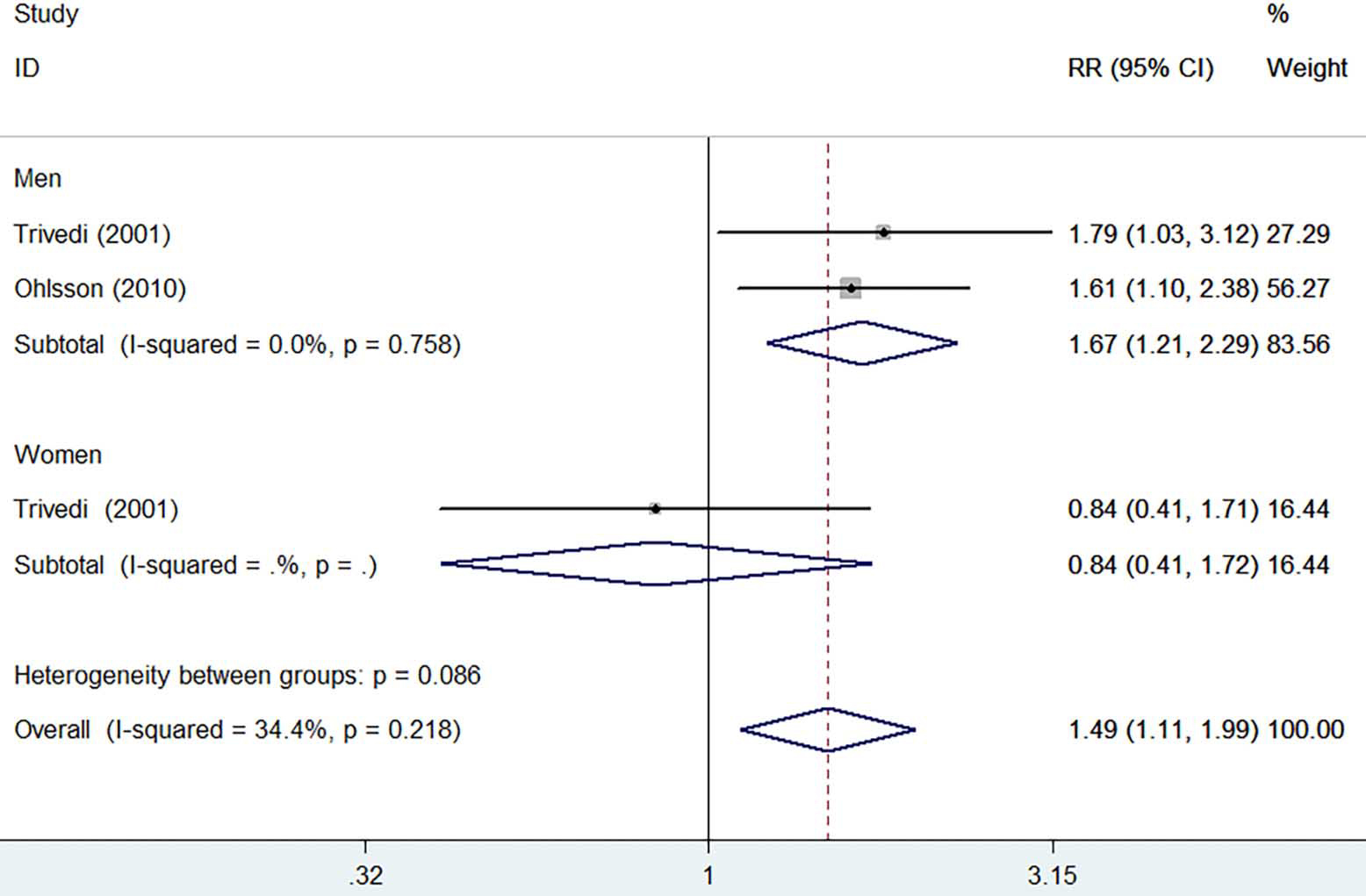 In accordance with our study, a previous systematic review and meta-analysis (26) suggested that cardiovascular disease patients with lower DHEAS levels had a 47% and 58% higher risk of all-cause mortality and fatal cardiovascular event. However, this meta-analysis included heterogeneous populations but not focused on the elderly population. To our knowledge, the present study is the first meta-analysis to summarize the association between circulating DHEAS level and cardiovascular or all-cause mortality in elderly general population. Apart from DHEAS, low endogenous testosterone level was associated with higher risk of all-cause and cardiovascular death in community-based studies of men (27). Aging process is associated with a decline in anabolic hormones (28). Therefore, multiple deficiencies in contamination of testosterone and DHEAS may have synergistic effects in predicting mortality in older men.

In our meta-analysis, gender-specific analysis of all-cause mortality indicated that the association of low DHEAS level with all-cause mortality risk was only observed in men but not in women. Analysis with cardiovascular mortality also yielded similar findings. These results suggest that DHEAS may exhibit different physiological effects among men and women. Also, directions of the pooling risk estimate for the DHEAS level with all-cause and cardiovascular mortality in women were different. This finding may be partly explained by the differences in the predominance of other sex hormones (29). Dehydroepiandrosterone can exert either an estrogen-like or androgen-like effect. Its metabolism to testosterone may increase the cardiovascular disease in postmenopausal women (30). A U-shaped association between DHEAS level and cardiovascular mortality was observed in postmenopausal women (31) and either low or high DHEAS level was at increased risk. High estrogen level may counterbalance the androgenic effects of dehydroepiandrosterone in the premenopausal women (32).

The mechanisms underlying the association of low DHEAS with mortality remain poorly elucidated. There may be several mechanisms by which endogenous DHEAS affects mortality in elderly men: (I) given both low serum testosterone and estradiol can predict mortality in elderly men, DHEAS can locally convert to testosterone and/or estradiol in target tissues; (II) DHEAS as its precursor has been implicated in anti-inflammatory and immune regulatory activity (33).

In conclusion, this meta-analysis indicates that low circulating DHEAS level is associated with increased risk of all-cause mortality in the elderly population. However, future randomized controlled trials investigating the effect of DHEA therapy on individuals with DHEAS deficiency are warranted before DHEAS supplementation for longevity can be recommended.

Reporting Checklist: The authors have completed the PRISMA reporting checklist. Available at http://dx.doi.org/10.21037/apm-20-441

Conflicts of Interest: All authors have completed the ICMJE uniform disclosure form (available at http://dx.doi.org/10.21037/apm-20-441). The authors have no conflicts of interest to declare.