Cardiovascular disease represents the largest single contributor toward global mortality, and is poorly controlled in approximately 40% of patient deaths in China (1-3). Heart failure (HF) is the end phase of cardiovascular diseases and remains a public health issues in many countries, which is a main cause of cardiovascular mortality worldwide. At present, the diagnosis and prognostication of HF is most commonly determined by brain natriuretic peptide (BNP) and N-terminal probrain natriuretic peptide (NT-proBNP). Plasma NT-proBNP is an excellent predictive risk factor for HF. However, the level of NT-proBNP changes following therapy (4).

Trimethylamine N-oxide (TMAO), a metabolite from choline and L-carnitine, is produced by gut microbiota (5-7). At present, many studies have indicated a relation between plasma levels of TMAO and cardiovascular diseases, and found that TMAO was an independent risk factor for major adverse cardiac events (8-12). Our previous study revealed that plasma level of TMAO was a risk factor for coronary heart disease in Chinese patients (13). In the present study, we determined plasma levels of TMAO in patients with or without HF. The diagnostic ability of TMAO was also evaluated relative to the well-established NT-proBNP. The previous research had demonstrated that TMAO was not only a predictor of cardiovascular diseases, but also directly increased the risk of death from cardiovascular diseases. Therefore, TMAO may be a new strategy for diagnosis and treatment of HF.

This study will explore the correlation between plasma TMAO level and HF in northern China. The severity of HF will be assessed by determining the plasma TMAO level in patients with HF. To determine the diagnostic value of TMAO in HF, TMAO was also evaluated relative to the well-established biomarker NT-proBNP. We can obtain new ideas for clinical prevention and treatment of HF. We present the following article in accordance with the STROBE reporting checklist (available at http://dx.doi.org/10.21037/apm-20-296).

During the period of May 2016 to August 2017, 296 patients with or without HF were recruited through the Department of Cardiology, First Affiliated Hospital of the Harbin Medical University. The inclusion criteria for the HF group were chronic HF patients, diagnosed by a cardiologist. Patients were excluded from the study if they had malignant tumor, simultaneous infection or severe hepatic and renal dysfunction diseases. The control group consisted of 112 participants with no clinical history of HF. The HF patients further were assigned to 3 groups according to the functional classification system of the New York Heart Association (NYHA), which included the NYHA II (n=8), NYHA III (n=82), and NYHA IV (n=94) groups. The study conformed to the provisions of the Declaration of Helsinki (as revised in 2013). This study was approved by the Institutional Ethics Committees of the First Affiliated Hospital of Harbin Medical University (No. IRB-AF/SC-08/05.0) and individual consent for this retrospective analysis was waived.

The recruited participants had the medical examinations carried out and were assessed by specialized cardiologist who gathered information about HF-related symptoms such as NYHA class. Serum levels of biochemical parameters were tested in the clinical laboratory of the First Affiliated Hospital of the Harbin Medical University. Echocardiography was conducted by investigators who were blinded to this study.

The plasma was collected from each participant and then stored at –80 °C refrigerator until analysis. Plasma level of TMAO was determined by LC-MS/MS as described previously (14). Five µL of each sample supernatant was injected into a silica column (100 mm × 2 mm, 3 µm, Phenomenex Luna Silica, USA) and was determined by high performance liquid chromatography system (Agilent Technologies, USA). TMAO and d9-TMAO were monitored using a triple quadrupole mass spectrometer (AB Sciex, USA).

Continuous variables were demonstrated as a mean ± SD, if a normal distribution was detected. Differences between 2 independent groups were analyzed using an independent-samples t-test, while differences among multiple groups were assessed using a one-way ANOVA. Continuous variables were demonstrated as a median and interquartile range, if not normally distributed. Differences between 2 independent groups were analyzed using the Mann-Whitney U test, while differences among multiple independent groups were analyzed using the Kruskal-Wallis test. Categorical clinical variables were displayed as % and were compared using the chi-square test. The receiver operating characteristic (ROC) curves were drawn and the area under the curve (AUC) was calculated to assess the HF risk. Logistic regression analysis was applied to evaluate the association between the TMAO and HF risks. The correlation analysis for the association of TMAO with risk factors of HF was assessed by Pearson’s correlation analysis (for continuous data) or Spearman’s correlation analysis (for categorical data). All statistical assessments were performed using SPSS 20.0 software. Statistical significance for all analyses was accepted at P<0.05. 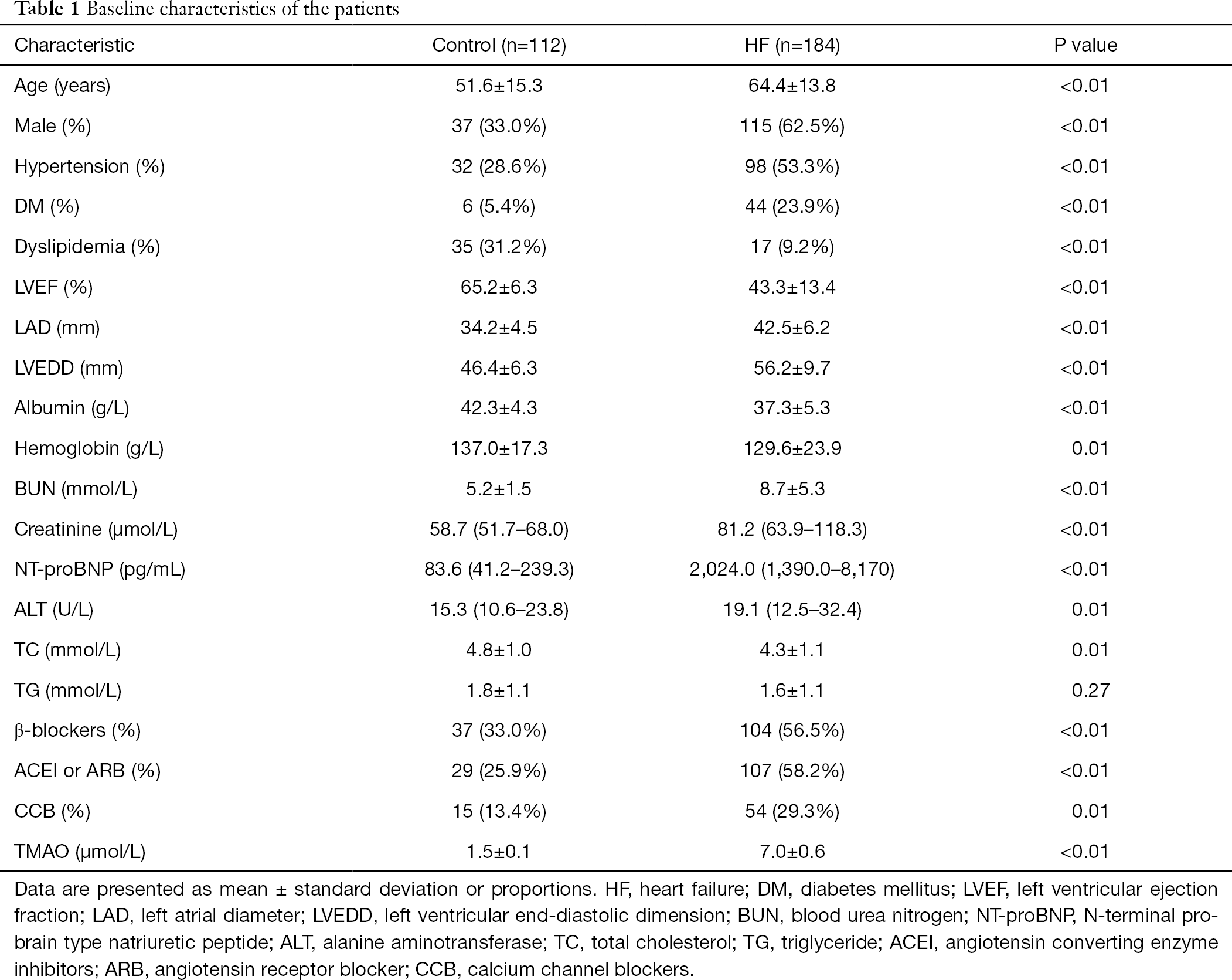 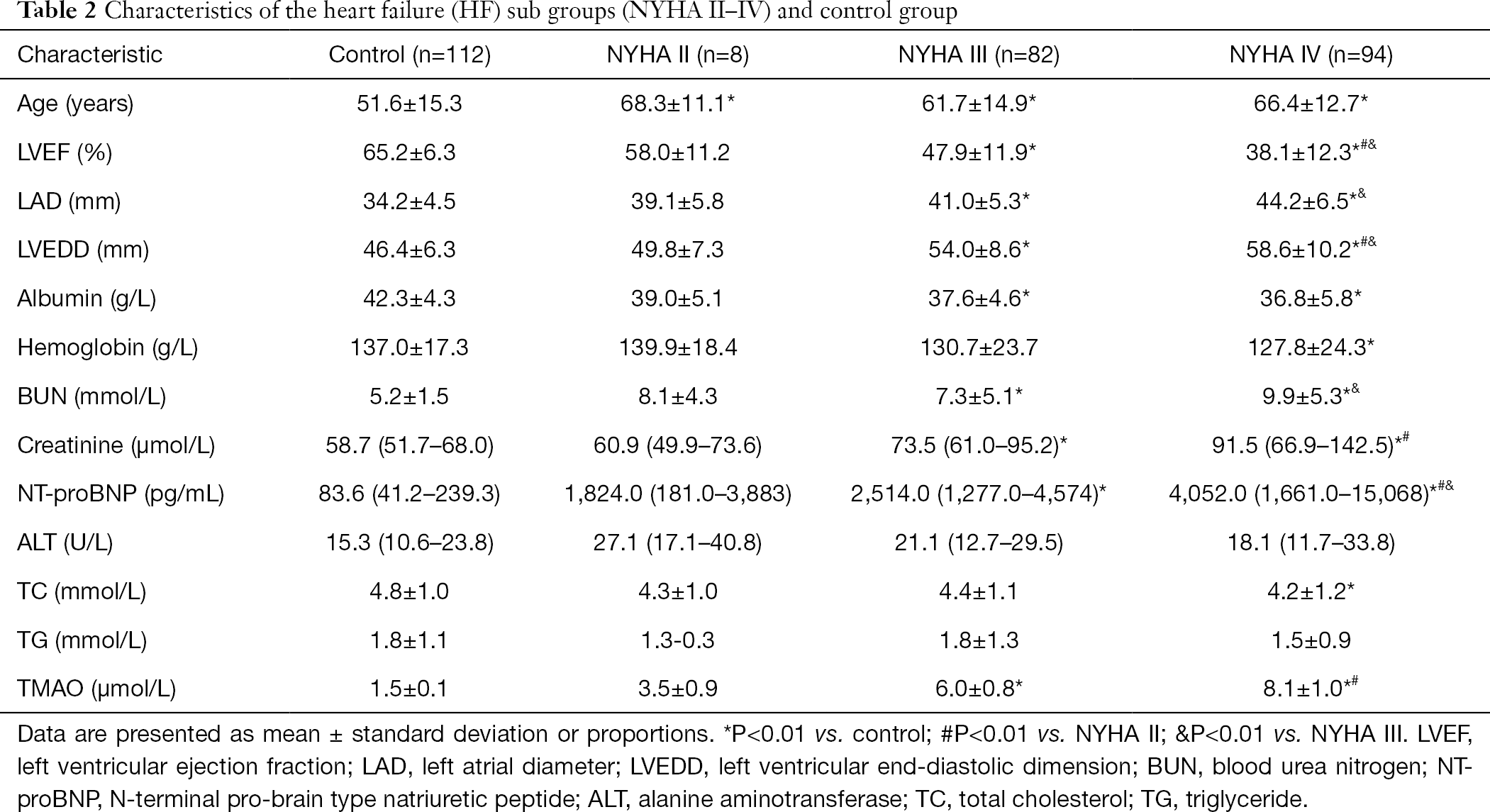 TMAO was isolated from plasma samples of control subjects and HF patients. The plasma levels of TMAO were analyzed using LC-MS/MS. TMAO was 7.0±0.6 µmol/L in HF group and 1.5±0.1 µmol/L in control group (P<0.01; Figure 1A). NT-proBNP were higher in HF patients than in controls (P<0.01; Figure 1B). These results indicated that TMAO or NT-proBNP have a significant association with HF (P<0.01). Additionally, TMAO and NT-proBNP levels were determined in the 3 HF groups relative to the control group (Figure 2A,B). The plasma levels of TMAO were 3.5±0.9, 6.0±0.8 and 8.1±1.0 µmol/L in NYHA II, NYHA III and NYHA IV groups, respectively. The plasma levels of NT-proBNP increased from NYHA II to NYHA IV group. As expected, both TMAO and NT-proBNP in all HF groups were significantly higher than in the control group.

Figure 3 ROC curves of the diagnosis ability of TMAO and NT-proBNP for HF. The area under ROC curve was determined to evaluate the predictive power of circulating TMAO (A) and NT-proBNP (B) for HF. ROC, receiver operating characteristic; TMAO, trimethylamine N-oxide; NT-proBNP, N-terminal probrain natriuretic peptide; HF, heart failure. 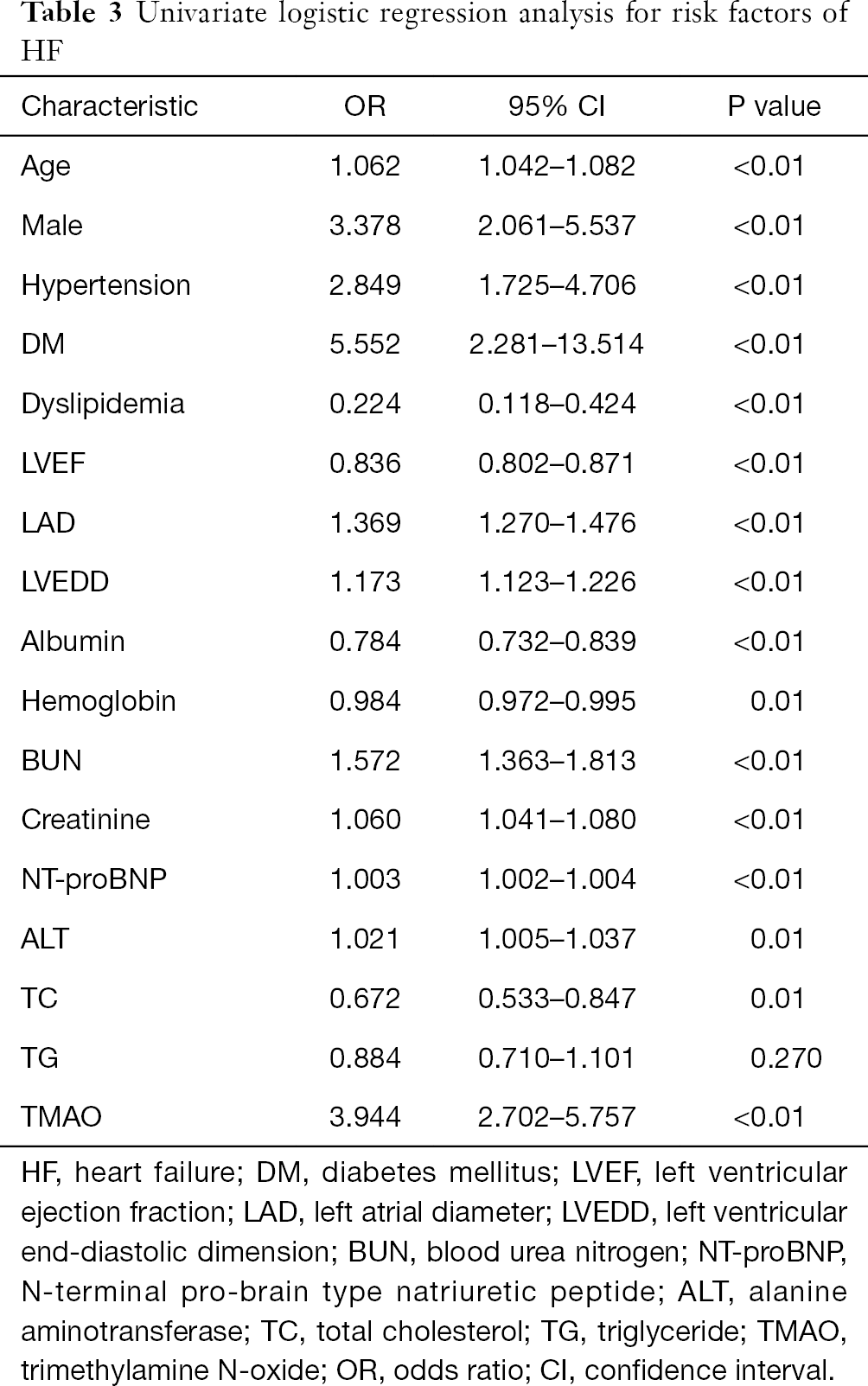 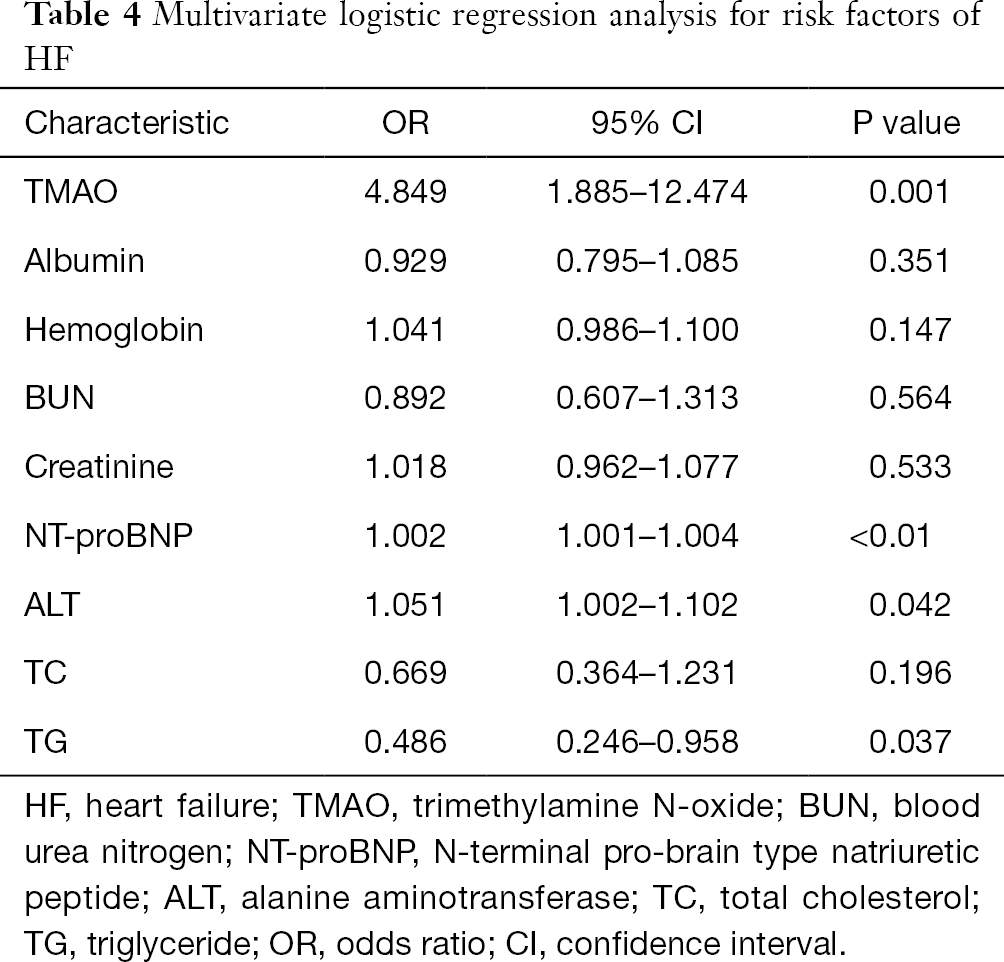 Correlation of TMAO with clinical parameters of HF 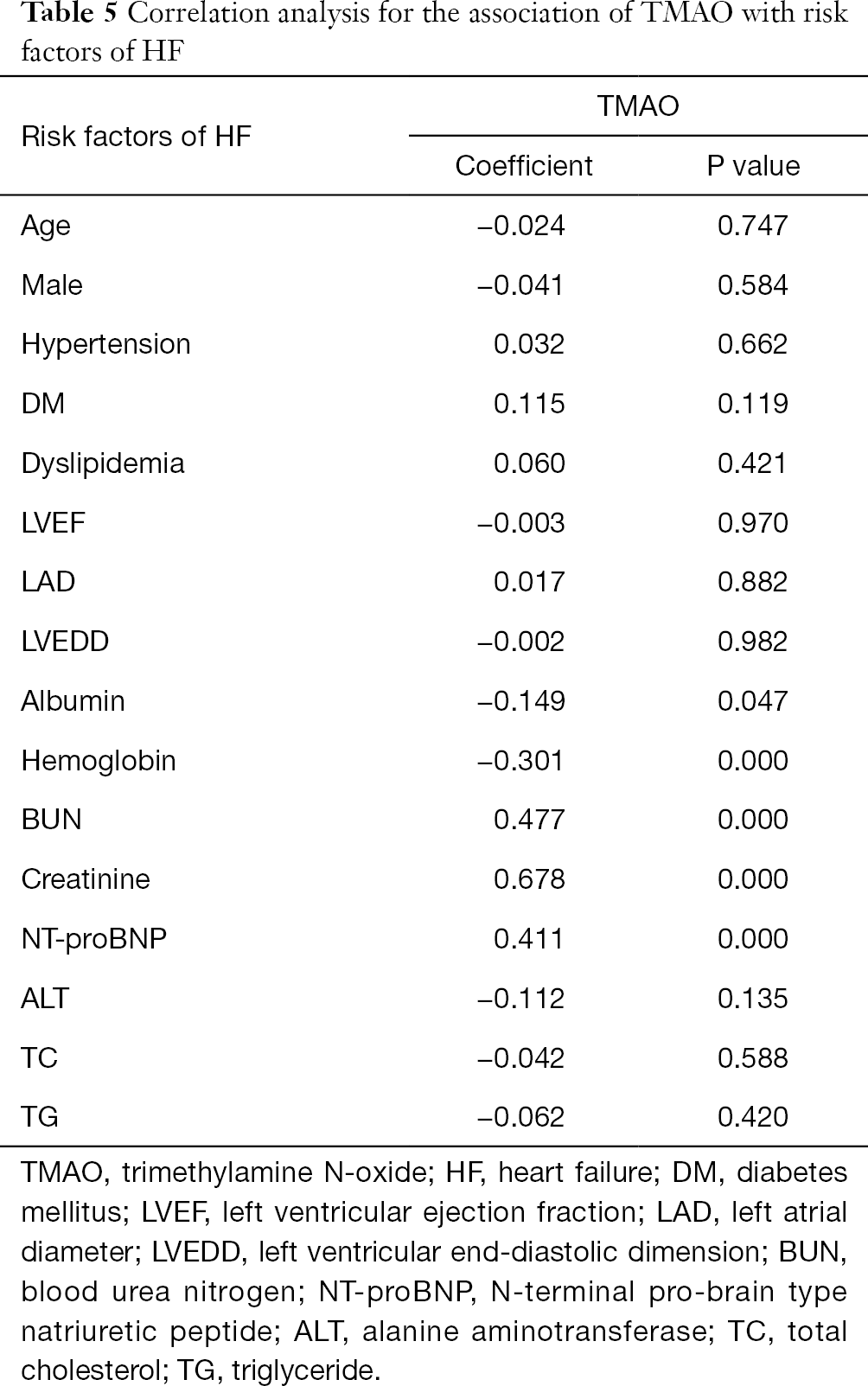 Comparison of the TMAO diagnostic efficacy in HF classification 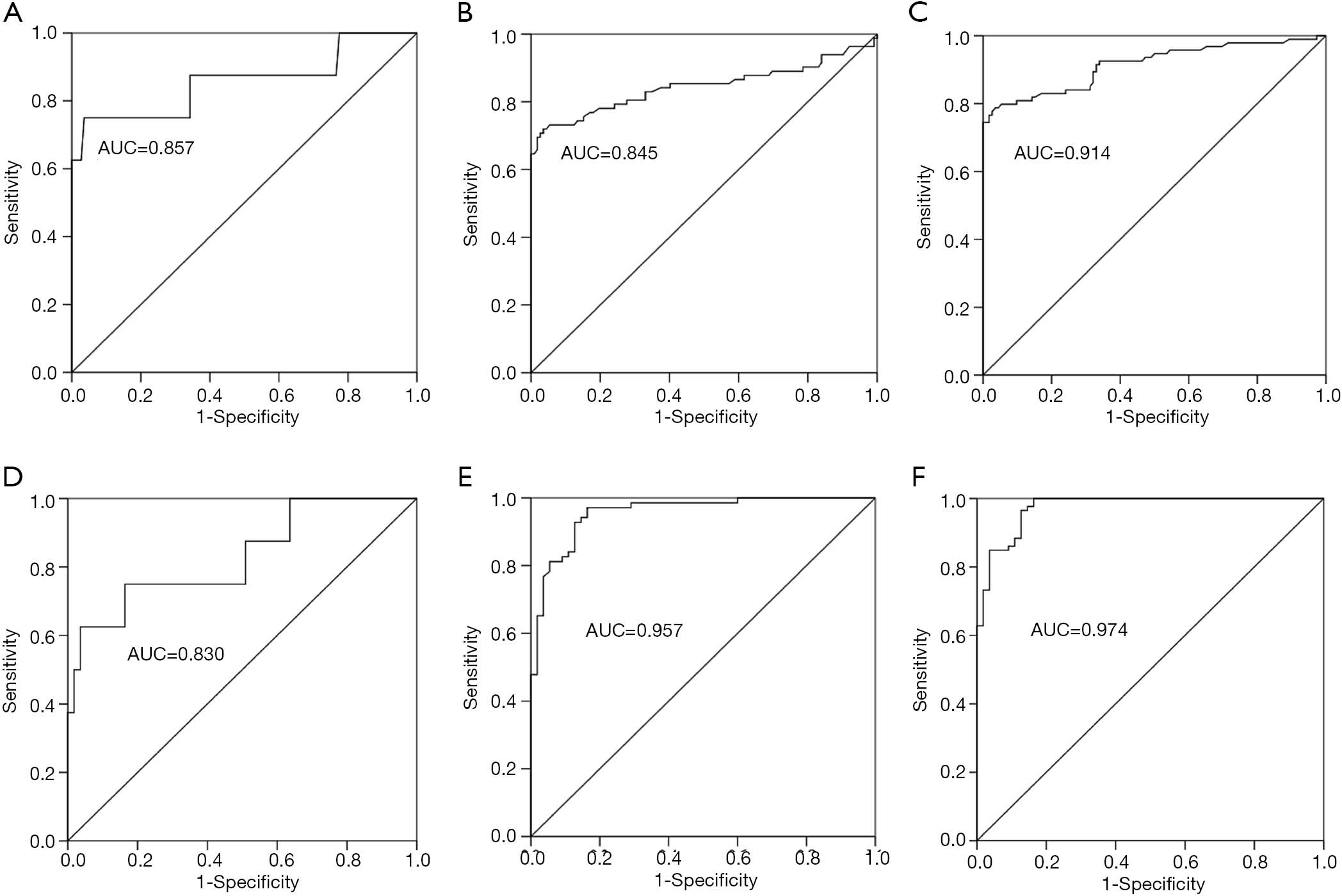 In this study, we determined the plasma levels of TMAO among patients with or without HF, and identified the correlation between TMAO and HF classification in northern Chinese patients. The plasma TMAO levels of the HF patients were significantly upregulated relative to the controls. The plasma levels of TMAO were increased from NYHA II to NYHA IV group. TMAO may serve as potential HF diagnostic markers for northern Chinese patients. As expected, the levels of NT-proBNP in NYHA II to NYHA IV HF groups were also significantly higher than in the control group. Thus, the well-established biomarker NT-proBNP was more effective than TMAO as a biomarker for detecting HF.

Many biomarkers have changed in HF, which reflect hemodynamic status, inflammation, and collagen homeostasis (15-17). At present, the mainly diagnostic index of HF is left ventricular ejection fraction (LVEF) and NT-proBNP. LVEF value is an important index for evaluating HF, however, which is not suitable for HF with a preserved EF. Meantime, the increase of NT-proBNP was not only in HF, but also in many other cardiovascular diseases (18,19). The plasma level of NT-proBNP also could change with the patient’s age, which might be related to the changes of cardiac microstructure (20). So, it is very important to find biomarkers for diagnosis of HF.

Accumulating data have demonstrated an association between TMAO and HF (9,10). These studies indicated that TMAO was a risk factor for HF, which indicated higher mortality risk in western countries (21). TMAO is produced from metabolism of nutrients by intestinal bacteria, because of the different dietary structure between western country and China, the relation between TMAO level and HF in northern Chinese patients is unclear. In this study, the plasma level of TMAO was 7.0±0.6 µmol/L in HF group and 1.5±0.1 µmol/L in control group (P<0.01; Figure 1A). Our results found that TMAO have a significant association with HF in northern Chinese patients. Furthermore, the ROC analysis revealed that AUC of TMAO was 0.881 to predict HF patients. Logistic regression analysis showed that TMAO was an independent predictor of HF. These findings suggest that TMAO may facilitate accurate diagnosis of HF and serve as an improved prognostic tool for northern Chinese patients. In this study, HF patients were further divided into NYHA II to NYHA IV groups. The plasma levels of TMAO were remarkably increased from NYHA II to NYHA IV group (3.5±0.9, 6.0±0.8 and 8.1±1.0 µmol/L, respectively). The ROC revealed that AUC of TMAO was 0.857 (95% CI: 0.674–1.000; P<0.01), 0.845 (95% CI: 0.778–0.911; P<0.01) and 0.914 (95% CI: 0.872–0.956; P<0.01) in NYHA II, NYHA III and NYHA IV groups, respectively. These results indicated that TMAO was an independent predictor of HF, and was highly associated with HF classification in northern Chinese patients. The exact role of TMAO on HF is unclear. Many studies have found that dietary intake affected gut microbiome and TMAO level had been associated with HF outcomes (22,23). High plasma level of TMAO was associated with diastolic dysfunction and mortality (10,21). In an experimental research, mice were fed with TMAO could induce HF, and increased ventricular remodelling (24). The previous study indicated that TMAO promoted proliferation, migration and collagen secretion via activating the NLRP3 inflammasome in cultured cardiac fibroblast (25). TMAO levels were significantly elevated in TAC-induced cardiac hypertrophy in SD rats. Furthermore, TMAO directly stimulated cardiac hypertrophy and fibrosis involving Smad3 signaling in vitro and in vivo (26). These results may be the possible mechanism of TMAO induced HF.

The present study had limitations. First, it had a relatively small study population. The number of NYHA II enrolled was very little. Second, our study was an observational and retrospective study, the further prospective data regarding the relation between TMAO and mortality of HF in patients are needed. Third, the exact role and mechanism of TMAO on HF still needs to be further studied.

TMAO was an independent predictor of HF and associated with HF classification in northern Chinese patients. The importance of our study is emphasized by the decrease of TMAO, offering new strategies for treatment of HF.

Reporting Checklist: The authors have completed the STROBE reporting checklist. Available at http://dx.doi.org/10.21037/apm-20-296

Conflicts of Interest: All authors have completed the ICMJE uniform disclosure form (available at http://dx.doi.org/10.21037/apm-20-296). The authors have no conflicts of interest to declare.

Ethical Statement: The authors are accountable for all aspects of the work in ensuring that questions related to the accuracy or integrity of any part of the work are appropriately investigated and resolved. The study conformed to the provisions of the Declaration of Helsinki (as revised in 2013). This study was approved by the Institutional Ethics Committees of the First Affiliated Hospital of Harbin Medical University (No. IRB-AF/SC-08/05.0) and individual consent for this retrospective analysis was waived.