Erectile dysfunction (ED) was deﬁned as the inability to achieve or maintain an erection adequate for sexual satisfaction (1). And the prevalence rate of ED is estimated to be 10% to 20% worldwide (2,3). After the introduction of new oral drugs for the treatment of ED, most clinicians adopted a goal-oriented approach to treat most ED patients (4). However, the diagnostic approach should be individualized as impotence is not a life threatening but a functional disease. So revealing the underlying etiology of ED is very important for individual treatment.

ED could be divided into psychologic and organic ED by etiology, in which organic ED may be caused by vasculogenic, neurogenic or other factors. Nocturnal penile tumescence (NPT) monitoring was the acknowledged objective test for diagnosis of ED, which could distinguish psychogenic from organic impotence (5). Its’ function in male impotence was first reported by Fisher et al., who described that penile erections naturally occur 3–5 times during sleep (6). The RigiScan device (Dacomed Corporation, Minneapolis, MN, USA) is the most reliable test to be used in NPT test (7-9).

However, whether RigiScan could distinguish psychogenic from organic ED is still a matter of controversy (10,11). And the absence of nocturnal erections does not indicate the etiology of the ED, even if due to an organic cause (12). Some researchers thought that pharmacopenile color doppler ultrasonography (PCDU) may replace the NPT test because PCDU was repeatable and most organic ED was vascular origin.

So in this study, we investigated the function of RigiScan in the diagnosis of ED, and we also compare it with that of PCDU.

We present the following article in accordance with the STROBE reporting checklist (available at http://dx.doi.org/10.21037/apm-20-507).

A retrospective cohort study was performed. One hundred and ninety eight patients in the second hospital of Shandong university between January 2009 and October 2015 because of ED were enrolled in our research. Every patient signed consent after taking the approval of our local ethical committee, Men were included in our study if their ED history is greater than 6-month duration and patients were excluded if they have one of the following diseases: spinal cord injuries, concurrent neurologic disease, morbid obesity, some drugs to affect erectile function, severe heart disease, penile fibrosis, hypertension. Patients who were included in this study underwent the following tests.

All procedures performed in studies involving human participants were in accordance with the ethical standards of the Second Hospital of Shandong University (No. 2019-156) and with the 1964 Helsinki declaration (as revised in 2013) and its later amendments or comparable ethical standards. Informed consent was obtained from all individual participants included in the study.

NPT tests were performed using the RigiScan® device in all the patients. To ensure good night sleep and less affection the patients were asked to avoid caffeine or alcohol intake and evacuate the bladder before going to sleep. Data was collected in the next morning. The test was conducted three consecutive nights for avoiding the “first night effect”. The test results were considered normal if at least one nocturnal erection event fulﬁlls the following criteria: tip and base rigidity ≥70%, an increase in tumescence at the tip ≥2 cm and at the base ≥3 cm, and if the event lasts ≥10-minute duration (9,13,14).

This test was performed with a GE color duplex ultrasound machine (GE LOGIQ9, America). Patients received a single intracavernous injection of Trimix (15 mg papaverine 5 mg prostaglandin E1, and 1 mg phentolamine). The erection was evaluated by palpation of the penis and the rigidity was divided into four levels. The penis was scanned from the ventral part at the base. Peak systolic velocity (PSV) and end diastolic velocity (EDV) within the cavernosal arteries were detected. Patients with PSV more than 35 cm/s were considered normal arterial response, while less than 25 cm/s demonstrated arterial dysfunction. Corporal veno-occlusive dysfunction was defined as EDV >5 cm/s and RI <0.85 (15-18).

Posterior tibial somatosensory nerve evoked potentials (PTSSEPs), pudendal nerve evoked potentials (PDEPs) and the bulbocavernosus reflex (BCR) test were performed for all the patients. PTSSEPs and PDEPs were conducted according to the International Federation of Clinical Neurophysiology (IFCN) standards (19). The latency of cortical P40 >45 ms or left-right difference >2.5 ms was considered abnormal response in the PTSSEPs test. PDEPs test was considered abnormal if P40 latency >44.1 ms. BCR test was conducted by applying electrical pulses and the responses were recorded from both bulbocavernosus muscles with concentric needle electrodes (20,21). Abnormal results were defined as absent responses, response latency >37 ms and interside differences >1.5 ms (15).

There is no perfect golden standard for organic ED by now. In this study, one patient was diagnosed as organic ED when any one of the following tests was abnormal, including sex hormone, PCDU and neurological tests.

Student t test was used to test the differences between the groups. Kappa test was done to determine the agreement between these two methods. ROC analyses were used to compare the efficacy of these two methods. Data was considered statistically significant at P<0.05. Values reported are mean ± standard deviation (SD). Statistical analyses were performed using SPSS 25.0 and EmpowerStats software.

The clinical characteristics of patients for standard were shown as Table 1. Some basic characteristics, such as age, glucose, triglyceride, history of smoking and diabetes, sex hormone, were compared. There was no great statistical significance. 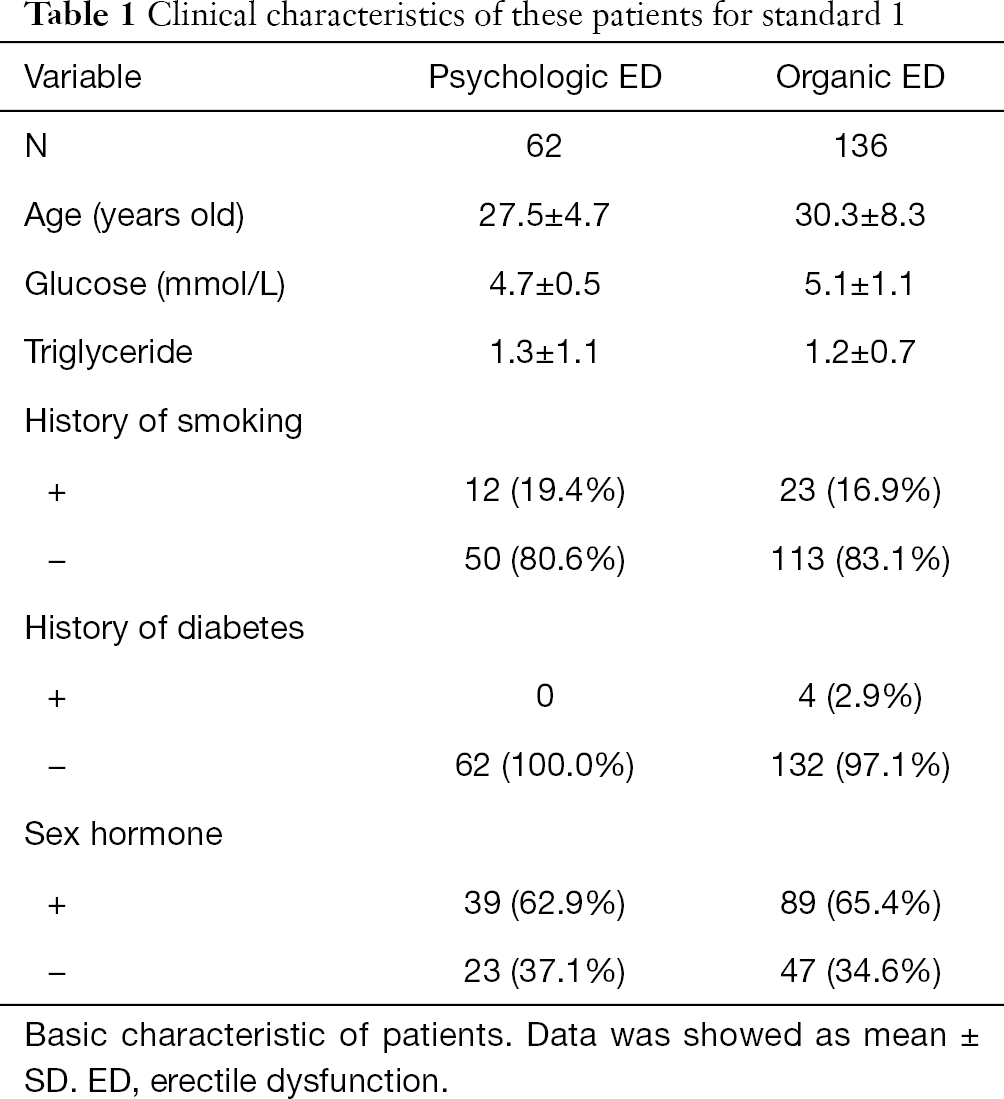 Cases found to be of psychogenic origin were 62 (31.31%) and of organic origin were 136 (68.69%) by all the examination. In the patients with psychogenic ED, 60 (96.77%) patients had normal nocturnal penile erection by RigiScan test. In the patients with organic ED. PCDU detected abnormal responses to intracavernous injection of Timix in 70 patients (51.5%) and normal responses in 66 cases (48.5%) (Table 2). 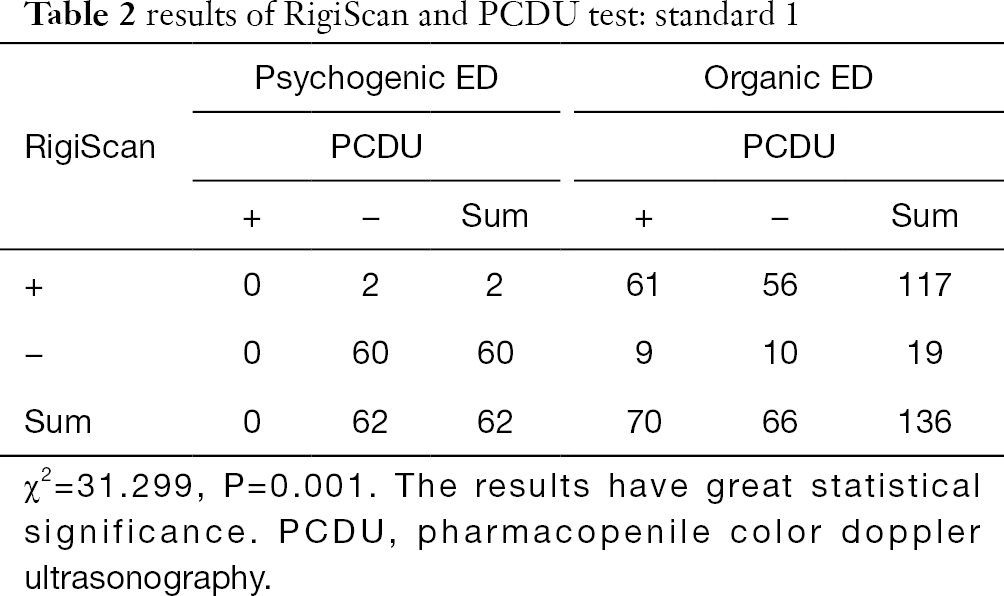 To detect which is most predictive of the psychogenic ED vs. organic ED, the ROC analysis was done. In the ROC analyses, RigiScan was better in sensitivity (0.8603 vs. 0.5147) (Table 4).

RigiScan is traditionally used to differentiate between psychogenic and organic ED (4). As the RigiScan is a noninvasive technique, some researchers tried to use it in differentiating subtypes of organic ED especially the vasculogenic types and they correlated its results with other diagnostic modalities (22,23).

However, whether RigiScan could distinguish psychogenic from organic ED is still a matter of controversy (24). And some urologists thought it could be substituted by PCDU. The main controversy focused on following points. First, for RigiScan, no reports could prove that RigiScan could distinguish psychogenic from organic ED and it could not find the cause the ED (12). Patients should be in hospital, so lots of factors may impact the results and has poor repeatability, patients should pay high medical fee. Second, for PCDU, most ED patients was diagnosed as vasculogenic ED and PCDU could identify the vascular abnormality (25). Few factors could affect the results and it has good repeatability.

“Golden standard” should be established if we performed the study to compare these two methods. For this study, this is the first choice for golden standard because these methods could find the organic problems directly. The true negative rate of RigiScan was 96.77%. The true of positive rate was 86.03% of RigiScan vs. 51.47% of PCDU. RigiScan had a significant but weak positive correlation with PCDU test (kappa value =0.361, P<0.01). So from this standard, we could demonstrate that RigiScan has its advantage compared with PCDU, but there are still more than 10% patients who couldn’t be diagnosed rightly.

The possible explanation about the results that these two tests were not matched was the following three aspects. First, the criteria of RigiScan were not accorded with that of PCDU. So the criteria were achieved in RigiScan in the night, but the PSV or EDV was not up to the standard of PCDU. Second, there is some limitation of RigiScan in the diagnosis of organic ED and psychogenic ED. So there may be some errors in the process of diagnosis. Thirdly, the vascular reactivity was normal, but the drugs performed direct action to vasculature and no neurotransmitter was released. So this demonstrated that there may be some problems with neural conduction or neurotransmitters.

So we could conclude that RigiScan has more advantages in distinguishing psychogenic ED from organic ED than that of PCDU, but it still should be completed with other methods.

RigiScan was the preferential choice in distinguishing psychogenic ED from organic ED. It has more advantages over PCDU. PCDU could not replace RigiScan by now. The diagnosis organic ED still should be performed multiple examinations for synthetical judgments.

Reporting Checklist: The authors have completed the STROBE reporting checklist. Available at http://dx.doi.org/10.21037/apm-20-507

Conflicts of Interest: All authors have completed the ICMJE uniform disclosure form (available at http://dx.doi.org/10.21037/apm-20-507). The authors have no conflicts of interest to declare.

Ethical Statement: The authors are accountable for all aspects of the work in ensuring that questions related to the accuracy or integrity of any part of the work are appropriately investigated and resolved. All procedures performed in studies involving human participants were in accordance with the ethical standards of the Second Hospital of Shandong University (No. 2019-156) and with the 1964 Helsinki declaration (as revised in 2013) and its later amendments or comparable ethical standards. Informed consent was obtained from all individual participants included in the study.