Tuberculosis (TB) and diabetes mellitus (DM) are both chronic diseases, and when they co-occur, they can be aggravated by mutual influence (1). DM has been shown to negatively impact TB treatment outcomes that the risk of TB disease is increased over 3-fold in people with diabetes compared to people without DM (2). TB can aggravate the disorder of glucose metabolism and make the blood sugar level of DM patients difficult to control. DM can lead to protein and fat metabolism disorders, which can reduce immune function and aggravate the condition of TB patients (3,4). DM has been shown to have a negative impact on immune function through the accumulation of advanced glycation end-products that alter phagocyte function (5). TB patients with DM is treated with multidrug therapy [rifampin (RIF) and isoniazid (INH)] for the 6 months of treatment compare with TB patients, TB treatment outcomes are worse in patients with DM (6). The risk of death or treatment failure was 1.7 times higher in TB patients with DM than in those without DM (7). However, an important problem in TB treatment is anti-mycobacterial resistance. DM patients with TB are also more likely to develop multidrug-resistant TB (MDR-TB) (8). 16% diabetic TB patients showed multi drug resistance (MDR) which was three times higher than resistance (5.9%) found in non-diabetic TB patients (9). RIF and INH is the two most effective anti-TB drugs, resistance to RIF and INH is multidrug-resistant (MDR) TB. Rifampin resistance is conferred by chromosomal mutations in the rpoB gene encoding the β subunit of the RNA polymerase (RpoB). Most rifampin-resistance-conferring mutations in Mtb clinical isolates are due to amino acid changes at codons 531, 526, 522, and 513 of RpoB (10). The mutation of katG or inhA is the major mechanism of INH resistance. KatG S315 mutation is the most common mutation in INH-resistant strains and accounts for more than half of the resistant clinical isolates (11). Furthermore, accompanying multidrug resistance will greatly increase the difficulty of treating the disease.

There were 10 million new cases of TB worldwide in 2018, with China accounting for 9% of cases and ranking second in the world in incidence (12). Guizhou province is a high incidence area and has the fourth highest incidence rate of TB in China, with the highest drug-resistance rate. Cases are mainly concentrated around Zunyi, Bijie, Tongren, and southeast Guizhou (13). In particular, the emergence of multidrug-resistant tuberculosis (MDR-TB) has brought more serious challenges to the prevention and control of TB worldwide (14). MDR-TB is a condition in which Mycobacterium tuberculosis is at least resistant to rifampin (RIF) and isoniazid (INH) (15). RIF and INH, as key first-line drugs in anti-TB treatment programs, have always played an important role in the treatment of TB. However, the emergence of MDR-TB may be related to the mutations of the rpoB, katG, and inhA genes of the two drug-related targets (16,17). This study selected TB patients in Zunyi and used polymerase chain reaction (PCR) to detect mycobacterial DNA and RNA (18) for the purpose of investigating the correlation between TB and diabetes mellitus with tuberculosis (DM-TB) in Zunyi. It is hoped the findings can clarify the relationship between the resistance-causing MTB-TB mutations of rpoB, katG, and inhA and the molecular biological characteristics of MDR-TB. We present the following article in accordance with the MDAR reporting checklist (available at http://dx.doi.org/10.21037/apm-20-1368).

This study collected sputum or irrigating fluid specimens from 763 pulmonary TB patients (according to the WS 288-2017 diagnostic criteria for pulmonary TB, Table 1) treated in the Department of Respiratory and Intensive Medicine of our hospital from December 2017 to July 2019. We detected the DNA, RNA, and acid-fast staining of Mycobacterium tuberculosis and yielded positive results for rifampicin and isoniazid resistance gene testing (primer sequences for rifampin and isoniazid resistance detection, Table 2) . We then compared the correlation between multidrug resistance in TB patients and TB-DM patients (according to the American Diabetes Association 2013 standardization diagnosis and treatment guidelines for diabetes, Table 1). Meanwhile, we collected the relevant clinical data of the included patients. The research process is shown in Figure 1.

The study was conducted in accordance with the Declaration of Helsinki (as revised in 2013), and was approved by the Guizhou Aerospace Hospital Medical Ethics Management Committee, and written informed consent was obtained from all patients.

The experiment was completed by our laboratory. Briefly, 2–3 drops of carbohydrate acid red were used after initial dyeing, and the slide was rinsed with water, decolorized with 3% hydrochloric acid alcohol for 30 seconds to 1 minute, rinsed with water again, washed with alkaline Meilan solution for 1 minute, and washed with water. After the slide had absorbed the water, 1–2 drops of cedar oil on the glass slide, carefully observe and count under a high magnification lens (also called oil lens). The number of MTB DNA- and RNA-positive subjects was counted, and the positive acid-fast staining results were compared. Then, the relevant clinical information of the above patients was collected.

The strips were numbered and placed in a 15 mL centrifuge tube containing PCR amplification product buffer. After 10 min at 100 °C and 90 min at 59 °C, the membranes strip was placed into a 50 mL centrifuge tube containing sodium citrate buffer, and washed gently at 59 °C for 15 min. The membranes were stripped into the coloring solution containing horseradish peroxidase for 10 min, the corresponding coloring point was observed, and the mutations of rpoB, katGm and inhA genes were interpreted. 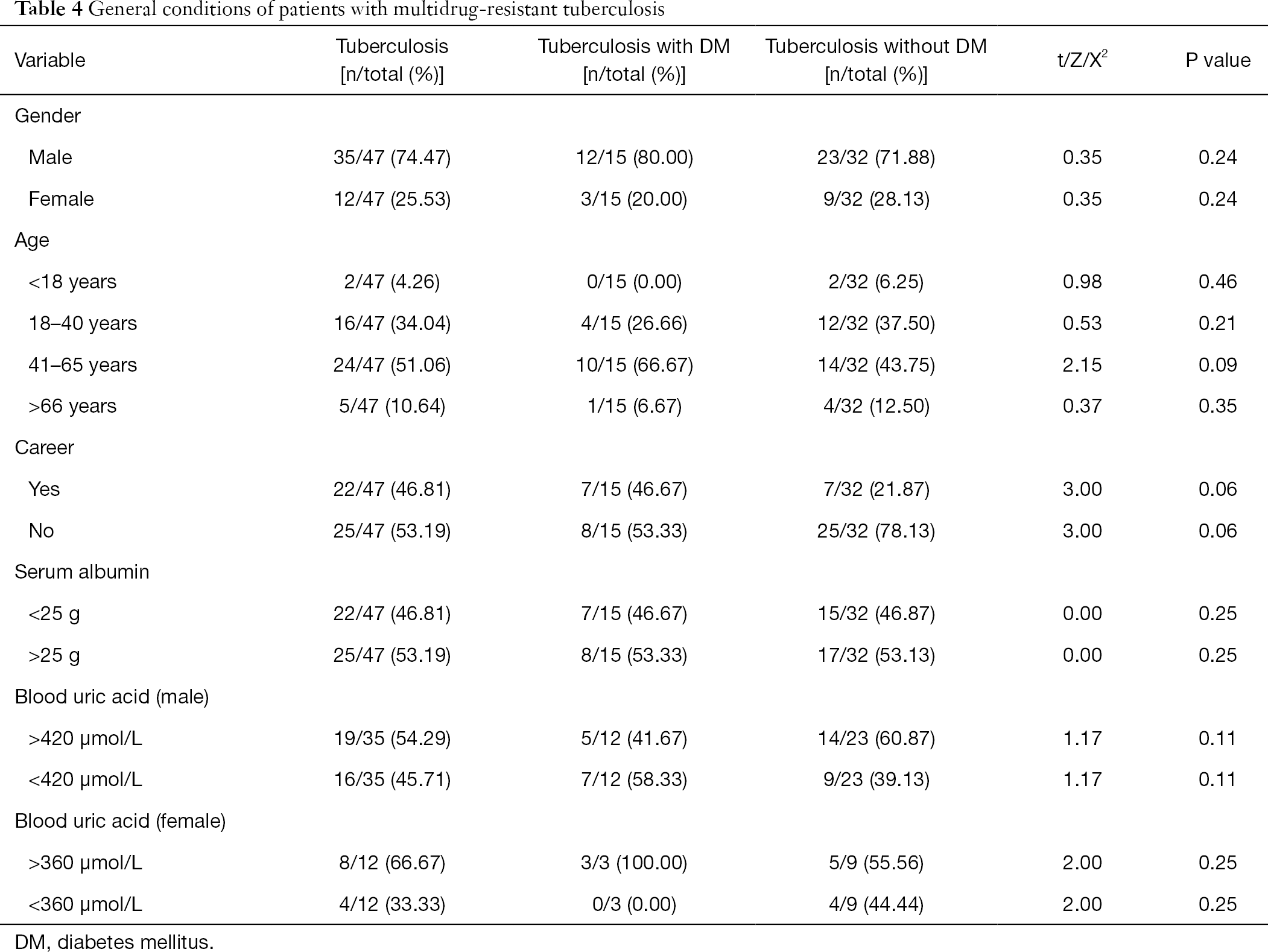 Mutation rate of drug resistance sites in patients with MDR-TB 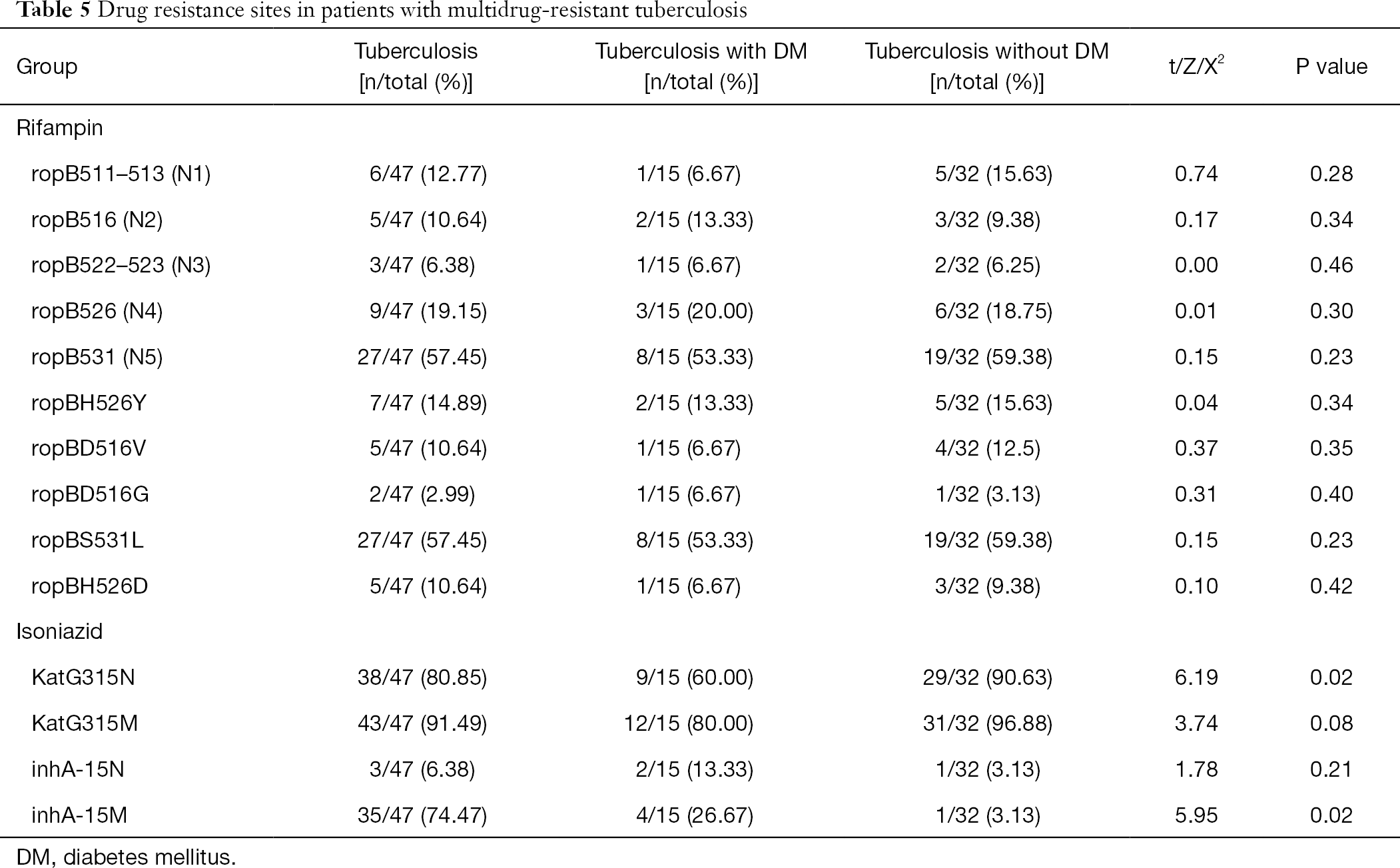 When rifampicin resistance occurred in patients with MDR-TB, mutations at ropB531 and ropBS531L sites were most likely to concomitantly occur. For isoniazid resistance, the mutation rate at the KatG gene was higher, and MDR-TB patients were prone to the KatG315N site mutation. Diabetes patients with MDR-TB were more prone to inhA-15M site mutation, but there were no obvious differences in other mutation sites (Figure 3).

With the changes in people’s lifestyles and dietary structures, the incidence of TB with diabetes has increased year by year. This particular combination of disease increases the body’s catabolism, causes a decrease in appetite, and affects the secretory function of the pancreas. Furthermore, the abnormal glucose metabolism of the condition is also likely to cause protein and fat metabolism disorders, leading to malnutrition and decreased cellular immune function, which further exacerbate the disease (19,20). If multidrug resistance reoccurs, it can seriously affect the treatment of patients, which not only increases the difficulty and cost of treatment, but also makes it difficult to control the disease, resulting in a reduction in cure rate and a rise in mortality (21). Therefore, early diagnosis of drug-resistant TB is the key to improving treatment efficacy. As an alternative to the culture method, molecular biology methods have been used to detect resistance mutations in rifampin and isoniazid, offering timely, accurate, and reliable detection results.

Patients with TB and diabetes are mostly middle-aged and elderly men, which may be related to the characteristics of diabetes susceptibility, while women with TB and diabetes have higher blood uric acid levels. TB patients were mostly men without fixed occupations, but, because the sample size was too small, we could not rule out accidental factors. This study analyzed the correlation between relevant clinical indicators and multidrug-resistant TB infection, and found that, compared with patients with TB, the serum albumin level of patients with TB and diabetes were slightly lower, which may be associated with the fact that TB and diabetes patients cannot fully utilize glucose, which is needed to break down proteins and fats to provide calories and reduce the body’s albumin synthesis (28). However, due to the limited sample size, the relevant results are not statistically significant, and thus the sample size needs to be expanded in further research.

Funding: This study was funded by the Zunyi Science and Technology Bureau of Guizhou Province [Zunshi Kehe Support NS (019) No. 6; Zunshi Kehe Shezi (2018) No. 30].

Reporting Checklist: The authors have completed the MDAR reporting checklist. Available at http://dx.doi.org/10.21037/apm-20-1368

Ethical Statement: The authors are accountable for all aspects of the work in ensuring that questions related to the accuracy or integrity of any part of the work are appropriately investigated and resolved. The study was conducted in accordance with the Declaration of Helsinki (as revised in 2013), and was approved by the Guizhou Aerospace Hospital Medical Ethics Management Committee, and written informed consent was obtained from all patients.