The incidence rate of colorectal cancer is third among all cancers worldwide, while the rate of mortality is second only to lung cancer (1). In 2018, there were approximately 1.8 million new cases and 880,000 deaths due to colorectal cancer globally. Although many treatments have improved the prognosis of colorectal cancer, the situation remains unfavorable. In particular, patients with advanced colorectal cancer who have previously undergone surgery or chemotherapy still have a limited total survival time. As a result of previous treatment experiences, some patients prefer palliative care in terminal stages as their demand for an improved quality of life increases. In recent years, hospice care has been paid more and more attention. Palliative treatment as a part of hospice care is mainly to relieve symptoms, relieve pain and improve the quality of life. The treatment methods mainly include the treatment of symptoms affecting the quality of life such as pain, anorexia and fatigue, as well as mental and psychological intervention. The object of our study is colorectal patients received palliative treatment, as clinical attention and research to these patients were less. But the number of these patients is not small. Thus, accurate biomarkers that evaluate the prognosis of these patients are necessary to support patients and their families, and provide information so that they may make timely, informed plans and health decisions.

Previous studies have identified tumor size, clinical stage, and tumor indexes as the critical prognostic factors for colorectal cancer (2-5). Lately, KPS, number of brain metastases, the albumin-to-globulin ratio, fibrinogen-to-albumin ratio and other hematological indicators are proved to related to overall survival in patients with colorectal cancer. In recent years, many studies have confirmed that the occurrence and metastasis of malignant tumors are related to inflammation and immune response (6-9). It has been shown that platelets, lymphocytes, neutrophils, C-reactive protein, and Glasgow prognostic score—as indicators of inflammation and immune response—have prognostic value in a variety of cancers. Furthermore, the platelet to lymphocyte ratio (PLR)—as one of the indexes to evaluate the balance of inflammatory and immune response—has been demonstrated to be useful for the prognosis of the lung, gastric, colorectal, and other cancers (10-13). However, the prognostic value of PLR in the palliative treatment of advanced colorectal cancer is rarely reported.

We present the following article in accordance with the MDAR reporting checklist (available at http://dx.doi.org/10.21037/apm-20-1389).

One hundred fifty-two patients with advanced colorectal cancer who received palliative treatment from January 2013 to January 2018 in The Air Force Hospital from Eastern Theater of PLA were selected as the study participants. Patients were eligible for inclusion in the study based on the following criteria: (I) age between 18 and 90 years old; (II) colorectal cancer confirmed by histopathology; (III) determined as stage IV according to the 7th edition of the American Joint Committee on Cancer (AJCC) staging system for colorectal cancer; (IV) progress following previous surgery or chemotherapy; and (V) no radiotherapy, chemotherapy, or targeted treatment in the three months before the study. Patients were excluded from the study based on the following: (I) patients previously diagnosed with chronic diseases (such as coronary heart disease, hypertension, and chronic obstructive pulmonary disease); (II) those with acute and chronic infectious diseases; (III) those with autoimmune diseases; (IV) those with other malignant cancers and blood system diseases; (V) patients who had used antibiotics, hormones, or anticoagulants within the three months before the study; and (VI) patients with incomplete clinical data. All patients received palliative treatment. Palliative treatment includes analgesia, antiemetic, nutritional support, psychotherapy and so on. All patients participating in the study signed the informed consent. The study was approved by the hospital ethics committee, and was in line with medical ethics standards according to the Helsinki Declaration of the World Medical Association.

Clinical characteristics from medical records were collected and analyzed and included sex, age, number of tumor metastasis sites, and ECOG score. After admission, platelet count, Lymphocyte count, hemoglobin, and albumin from routine blood and biochemical examination were collected. The ratio of platelet to lymphocyte was represented as PLR. The total survival time was defined as the time from diagnosis of stage IV to death due to colorectal cancer. All cases were followed for up to two years from the joining date. The final follow-up date was January 1, 2020, and the follow-up rate was 100%.

Spss 22.0 software was used for data processing and analysis. Receiver operating characteristic (ROC) curve analysis was performed to confirm the Youden Index and to subsequently identify the optimal cutoff value for PLR according to the area under the ROC curve (AUC). The mean ± standard deviation was used for normally distributed measurement data, and the median (interquartile range) [M (P25, P75)] was used when the measurement data were non-normally distributed. Counting data was expressed by a numerical value, and the chi-square (χ2) test was used for comparison between different groups (which were from categorical data). The Kaplan-Meier method and the log-rank test were used to analyze survival factors and compare the survival differences between high and low PLR groups. Univariate and multivariate Cox regressions analysis was used to determine the independent prognostic factor affecting long-term survival. The hazard ratio (HR) and 95% CI was reported from the multivariate Cox analysis. A two-sided P value less than 0.05 was considered statistically significant. 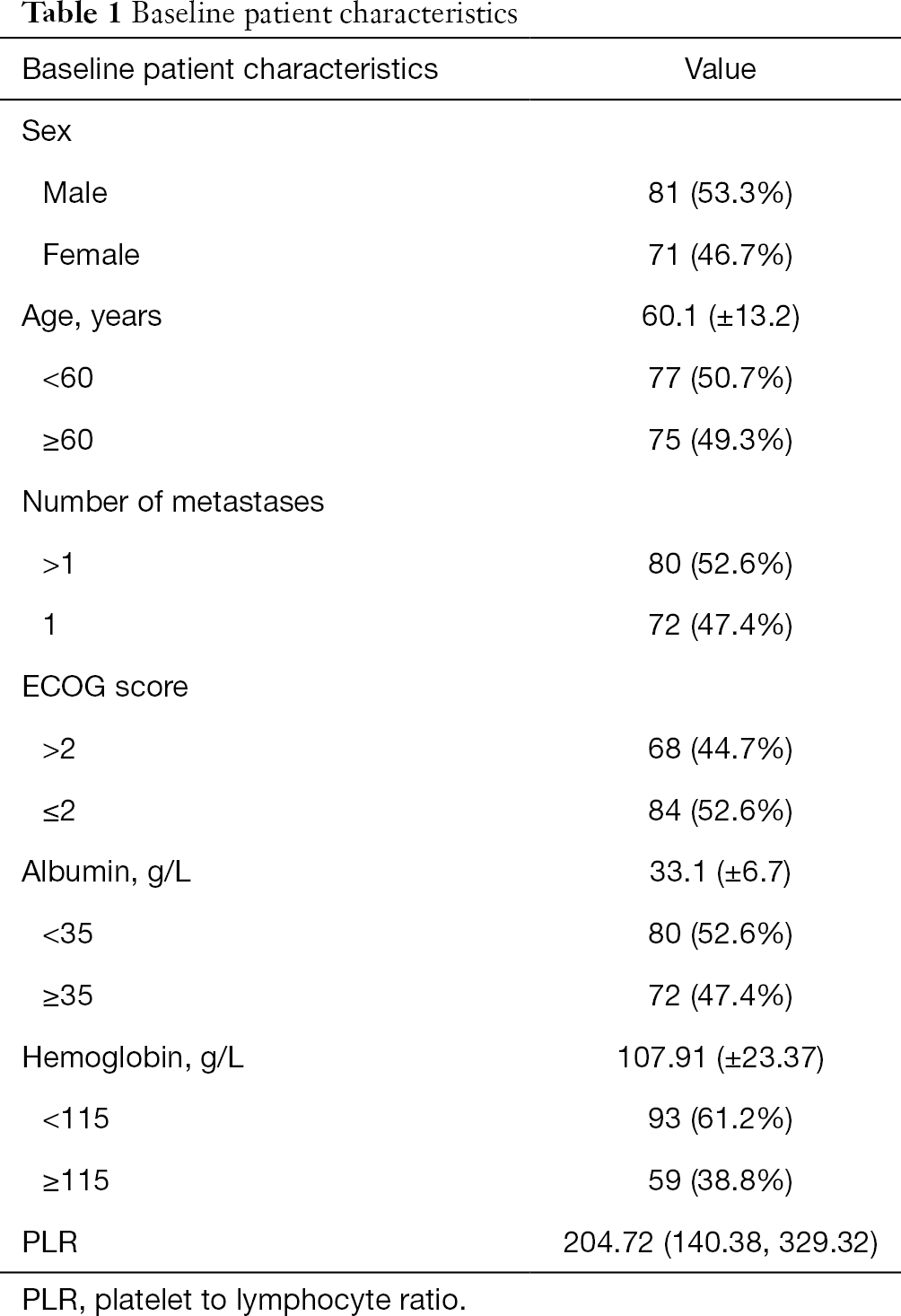 Patient characteristics and survival in High and low PLR groups 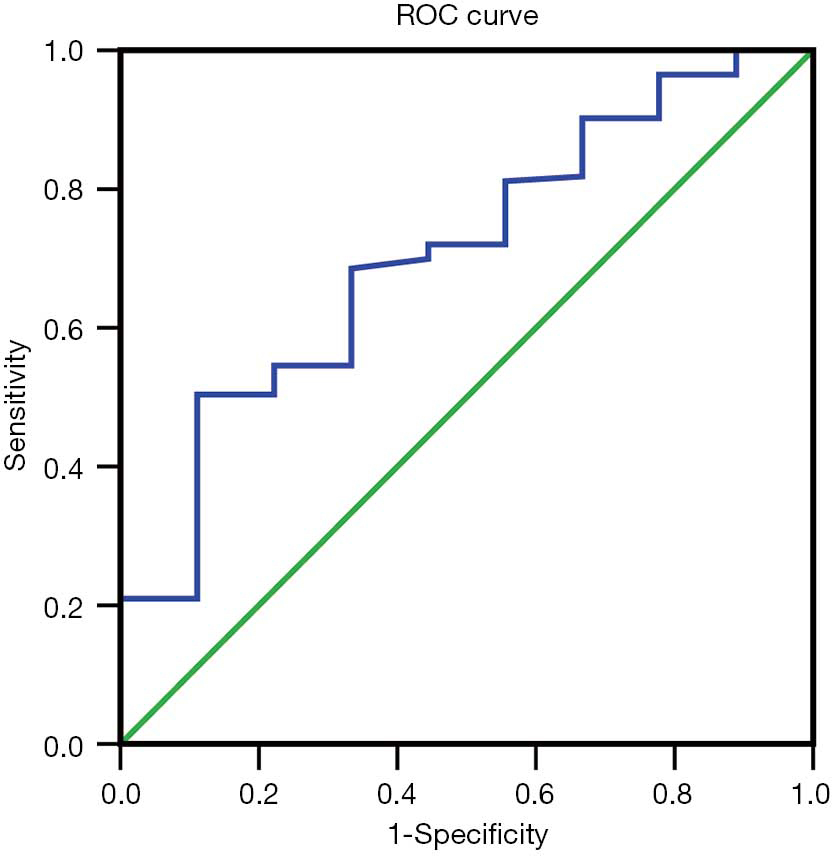 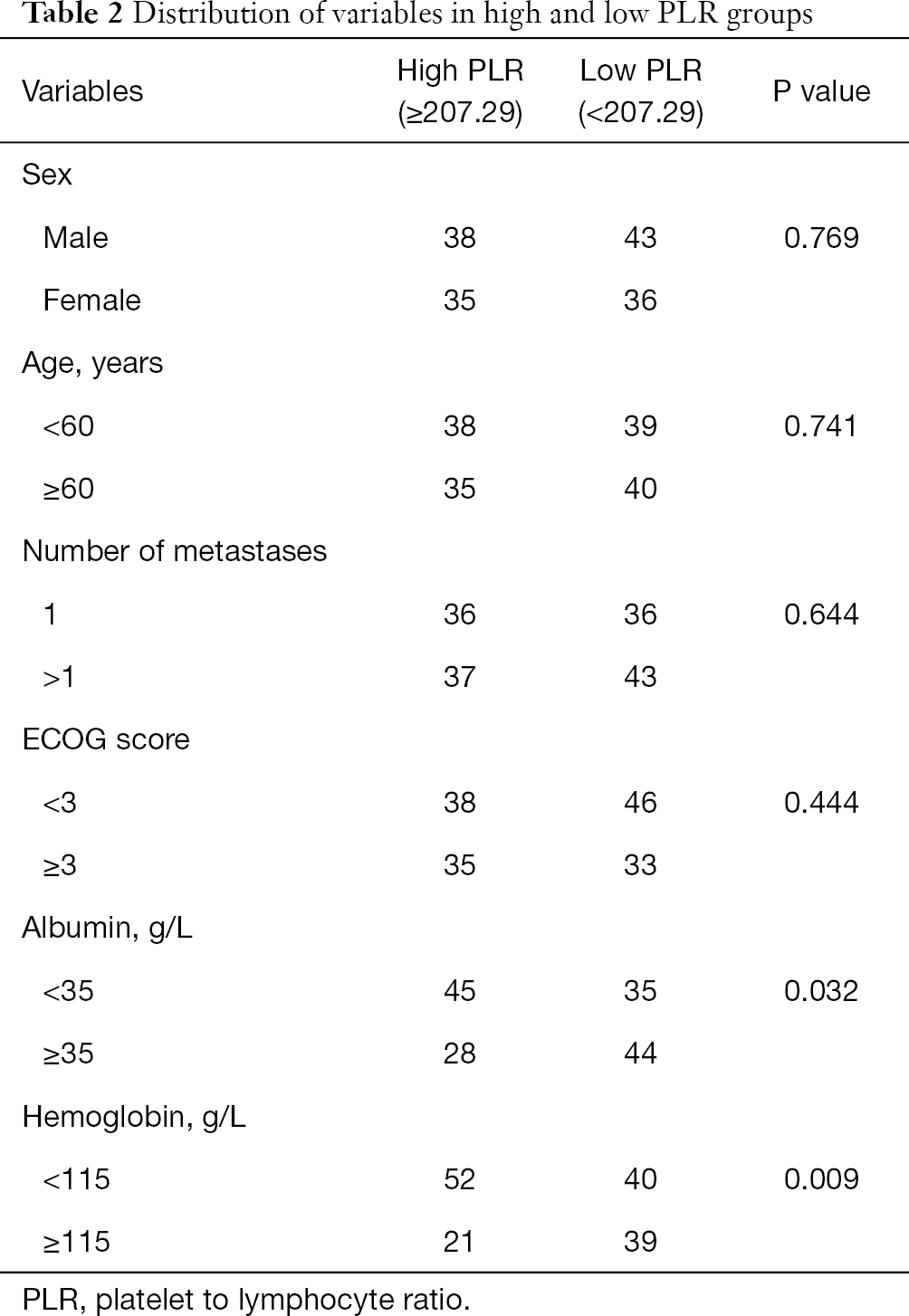 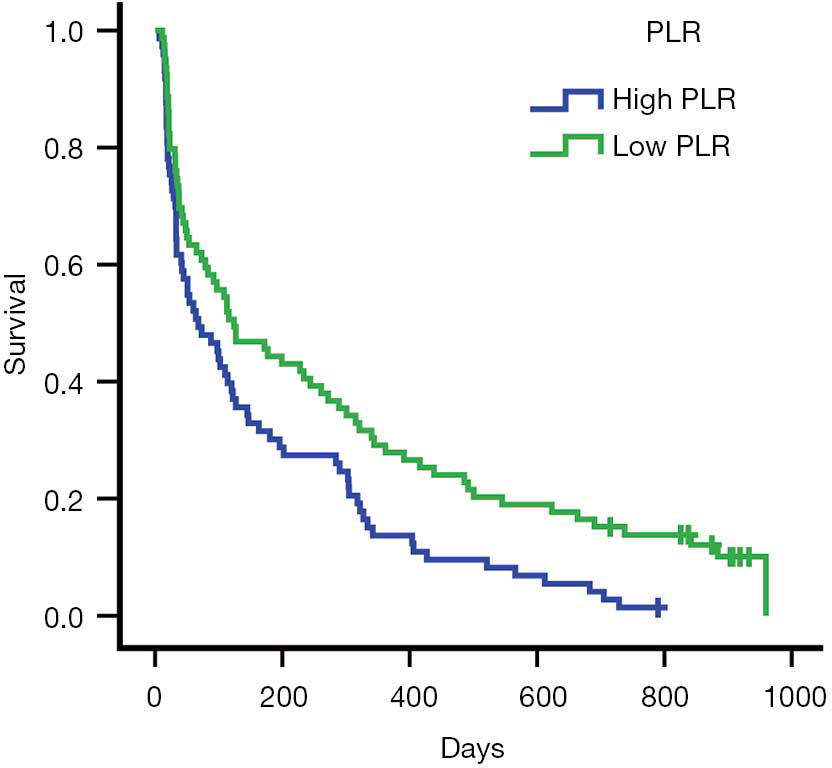 Previous studies have demonstrated that inflammation is related to tumor progression. The physiopathological mechanism between inflammation and tumor progression is still unknown; however, several theories may explain it. The local environment of tumor growth (i.e., the tumor microenvironment) could lead to tumor proliferation, invasion, and metastasis (14,15). The primary cell components of a tumor microenvironment are neutrophils, lymphocytes, platelets, macrophages, and natural killer cells, among others. In recent years, studies have shown that platelets from peripheral blood were collected into a tumor microenvironment through blood circulation, and participated in a chronic inflammatory response. Meanwhile, tumor cells can stimulate platelet activation by directly contacting or releasing platelet-inducing factors, such as adenosine diphosphate (ADP). ADP activates tumor cell-surface receptors and induces secretion of a variety of bioactive substances to affect cell and vascular growth. They also promote swelling, tumor cell growth, invasion, migration, exudation, and distant metastasis (16-18). Lymphocytes were the principal cells of characteristic immunity. In particular, CD4+ and CD8+T lymphocytes act in unison to form the immune barrier and kill tumor cells (19,20). Adenosine (produced by tumor cells) and lactic acid (produced by glycolysis) can inhibit the proliferation and function of effector T lymphocytes (21). Thus, the PLR can reflect the balance of inflammation and host immune reaction and provide insight regarding tumor diagnosis and prognosis evaluation

Numerous studies have established the correlation between higher PLR and poor long-term outcomes for many cancers, including lung (10), gastric (11), and breast (13), among others. Moreover, the results obtained in some studies of colorectal cancer concurred with our results (22,23), and some meta-analyses came to similar conclusions (24). This study employed a ROC analysis to define the optimal cutoff PLR value. Previous studies reported that the cutoff value in colorectal patients was 153–216 (25,26), which was similar to the values observed in our study (PLR =207.29). Low PLR was associated with long-term survival. Univariate and multivariate Cox proportional-hazard analysis revealed that PLR was an independent prognostic factor for survival time in patients with colorectal cancer. In our study, PLR showed no correlation with sex, age, and ECOG score, though it was strictly correlated to albumin and hemoglobin levels. Similar observations have been reported by other studies, indicating that both albumin and hemoglobin may influence immunological function, though the mechanism underlying their interaction is unknown at this stage. Despite the complex relationship between these factors, it is reasonable to assume that they are likely related to cancer progression.

There are several limitations to this study that should be acknowledged. Firstly, the sample size was limited. Secondly, this study is based on published reports. Finally, this is a one-center study and lacks a multi-center comparison. Hence, in order to reliably confirm the results obtained in this study, prospective research on much larger sample size is required.

We would like to thank Xian Xu for her useful suggestions.

Reporting Checklist: The authors have completed the MDAR reporting checklist. Available at http://dx.doi.org/10.21037/apm-20-1389

Conflicts of Interest: All authors have completed the ICMJE uniform disclosure form (available at http://dx.doi.org/10.21037/apm-20-1389). The authors have no conflicts of interest to declare.

Ethical Statement: The authors are accountable for all aspects of the work in ensuring that questions related to the accuracy or integrity of any part of the work are appropriately investigated and resolved. All patients participating in the study signed the informed consent. The study was approved by the hospital ethics committee, and was in line with medical ethics standards according to the Helsinki Declaration of the World Medical Association (20200701001).