Fluid-attenuated inversion recovery (FLAIR) vascular hyperintensity (FVH) indirectly reflects the state of cerebral blood flow of AIS patients and is a critical marker for collateral circulation after large-vessel occlusion (5). Its value in predicting the short-term prognosis of stroke patients is still a controversial topic (6-11). Studies on the predictive value of FVH have focused on patients who received reperfusion within 24 hours of stroke onset. However, 10% to 15% of AIS patients are unable to receive early and effective reperfusion in clinical practice (12). For AIS patients beyond the time window for thrombolysis who are receiving dual antiplatelet therapy (DAPT) alone, few data are available about the relationship between FVH and END and 90-day prognosis currently. In this study, we investigated the value of FVH combined with other risk factors in predicting END and short-term prognosis in AIS patients.

We present the following article in accordance with the STROBE reporting checklist (available at http://dx.doi.org/10.21037/apm-20-1175).

We collected the data of AIS patients treated at the Department of Neurology of our hospital between January 2014 and December 2018. Inclusion criteria were: (I) AIS patients within 24 to 72 hours from stroke onset to magnetic resonance imaging (MRI) and contraindicated for guideline-recommended thrombolysis or thrombectomy; and (II) AIS patients treated with anticoagulation therapy, antiplatelet therapy, and oral statins. Exclusion criteria were: (I) MRI indicating conditions other than cerebral infarction, such as cerebral hemorrhage, tumors, or encephalitis; (II) bilateral infarction; (III) poor image quality cannot meet the requirements of clinical qualitative and quantitative evaluation.

We collected the general patient information, including patient age, sex, time of onset, risk factors for stroke (atrial fibrillation, systolic pressure, diastolic pressure, glucose, triglycerides, low-density lipoprotein, high-density lipoprotein), cerebral white matter hyperintensity (Fazekas grade), and significant END-related chemistry indicators (C-reactive protein, brain natriuretic peptide precursor) as reported in the literature (13-15). We also collected the NIHSS score at admission and on days 3 of admission and the 90-day modified Rankin Scale (mRS) score. END was defined when the NIHSS score increased by ≥2 within 72 hours of onset (16). The patients were divided into the END group (NIHSS score increased by ≥2 by day 3 of admission), and no early neurological deterioration (NEND) group (NIHSS score increased by <2). The 90-day prognosis was evaluated with the modified Rankin Scale (mRS), and the patients were divided into the favorable prognosis group (mRS score 0–2) and the unfavorable prognosis group (mRS score >2).

The study was conducted in accordance with the Declaration of Helsinki (as revised in 2013), and was approved by the Ethics Committee of the Second Affiliated Hospital of Nantong University (No. 2020YL025). Written informed consent was obtained from all patients.

FVH was defined according to earlier studies (17), as focal, serpentine, or tube-shaped hyperintensity passing through the subarachnoid space. FVH is slow blood flow through collaterals existing within the pia mater after arterial occlusion (10,18). FVH score was evaluated with the modified Alberta Stroke Program Early CT Score (ASPECTS). Seven cortex regions (M1 to M6, insular cortex) supplied by the middle cerebral artery were observed for FVH; one point was deducted for each region involved, with the highest score of 7 (5,19). Multiple hypointense vessels (MHV) were evaluated with the modified ASPECTS (the highest score of 8), and one point was deducted for each region involved (20). DWI was evaluated with the conventional ASPECT score (the highest score of 10), and one point was reduced for each region involved (21). Vascular stenosis or occlusion was evaluated with TOF-MRA. Additionally, the brain white matter hyperintensity was evaluated with the 6-point Fazekas scale (22). Lastly, the vascular stenosis/occlusion was defined as the occlusion or stenosis of the internal carotid artery or middle cerebral artery ≥50% on TOF-MRA (23) .

All images were evaluated by two experienced radiologists blindly to clinical informations. In case of discrepancy, a third, senior radiologist was consulted to reconcile the results. 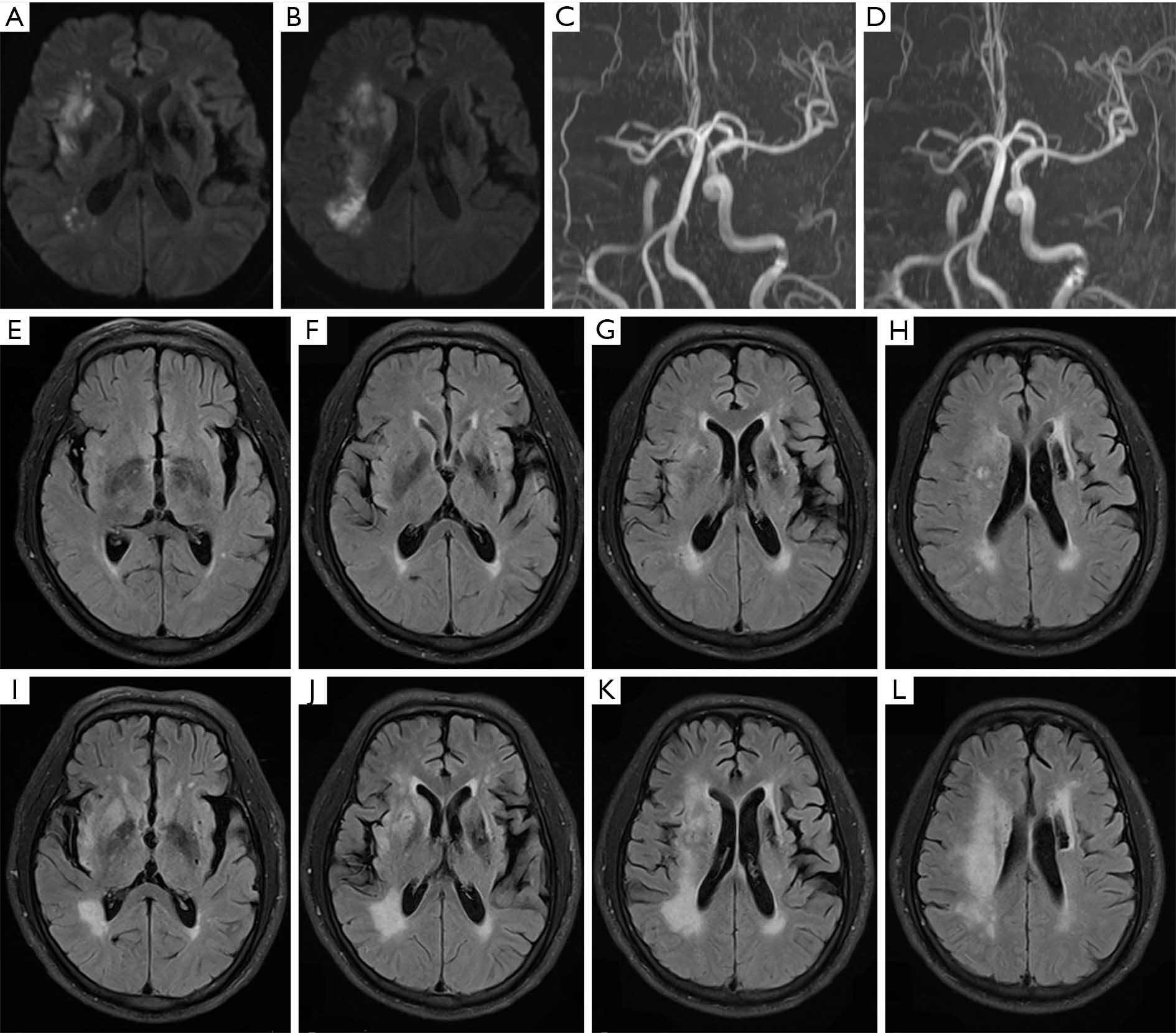 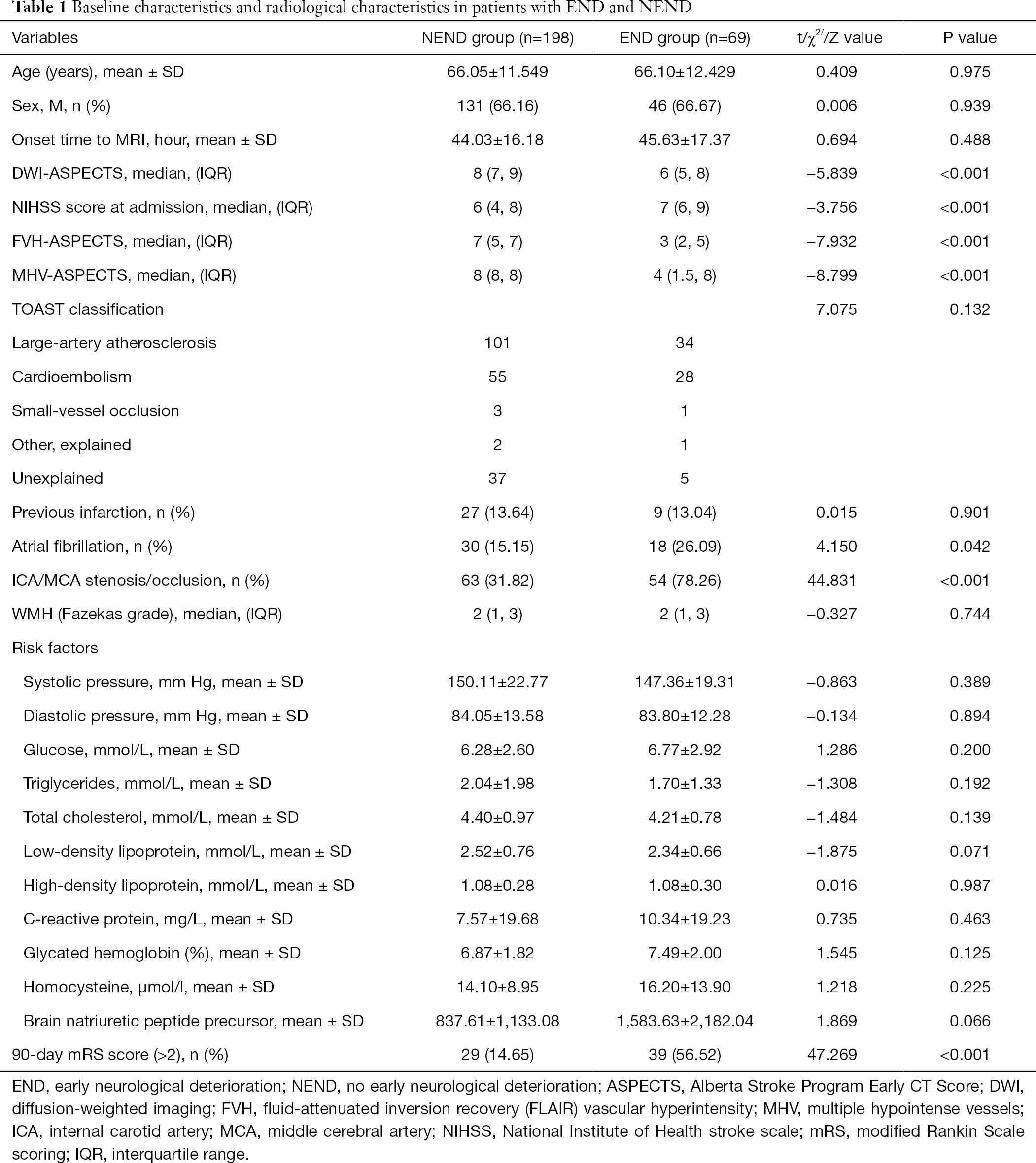 This study only included AIS patients beyond the time window for recanalization therapy who were receiving DAPT. The overall incidence of END was 25.84%. It has been reported that approximately 10% of patients experience END after thrombolysis (24). In our research, we just focus on patients who are beyond the time window for recanalization therapy, and there is a lack of comparison of data on patients who underwent reperfusion therapy.

We found that the NIHSS score at admission, DWI-ASPECTS, FVH-ASPECTS, and MHV-ASPECTS, especially DWI-ASPECTS and FVH-ASPECTS, were correlated with END and adverse prognosis in stroke patients. A low DWI-ASPECTS was associated with a higher risk of END, which may be due to a larger infarction need more compensatory collateral circulation (25-27). The infarction volume is a known significant risk factor for END (28), and FVH may be an early imaging sign of a large infarction. FVH indicates that the brain with a decreased cerebral blood flow, and the hypoperfusion tissue may progress to an infarction without effective reperfusion (29). FVH sign may appear earlier than the hyperintensity in DWI sequences; it is a risk factor for END.

Forty-five percent of AIS patients appear FVH signs within 24 hours of onset, and more than 90% of patients with middle cerebral artery occlusion appear FVH signs within 24 hours of onset (17) . FVH seems to be transient and disappears within 24 to 36 hours of onset in stroke patients (27). However, this study showed that 72 hours after onset, 41.94% of AIS patients still appeared FVH on MRI, which may be because the patients included in this study did not receive thrombolysis, resulting in persistent vascular occlusion or stenosis and hypoperfusion of brain tissue. Also, previous studies (10,30) showed that FVH might persist for several weeks after onset, indicating persistent cerebral hemodynamic impairment in brain tissue, which indirectly confirms that FVH is a risk factor for END.

Once END occurs, it leads to severe neurological dysfunction (2). This study showed that 56.52% of END patients had an adverse 90-day prognosis, its higher than that in the NEND group. Ischemic penumbra may be present up to 36 hours and may progress to an infarction without effective reperfusion (31), which indirectly suggests that 24 hours may still be the early stage of stroke progression. Hakimelahi et al. (32) showed no significant correlation between the infarct volume and the onset of stroke. Other factors may affect the scope of infarction, and the variation in cerebral perfusion because of the state of collateral circulation may be the ultimate cause of varying severity of stroke. A case report showed that 37 hours after onset, patient with occlusion of the anterior circulation still had favorable prognosis after effective endovascular treatment (33). END may reflect the underlying pathophysiological process, but it is possible to be prevented. Therefore, it is essential to evaluate the risk of END early and administer individualized therapy in stroke patients. Further research is needed in patients beyond the time window for recanalization therapy.

In this study, univariate analysis showed that MHV-ASPECTS was correlated with END, and a lower MHV-ASPECTS was associated with a higher risk of END. MHV reflects hypoperfusion of brain tissues, and patients with MHV are prone to the neurological deterioration (34). However, our binary stepwise regression analysis showed that MHV-ASPECTS was not an independent risk factor for END. We surmise that MHV may be related to deoxyhemoglobin concentration. Furthermore, it may also be related to the ratio of deoxyhemoglobin to oxyhemoglobin, indicating the oxygen demand of ischemic brain tissue, rather than the state of collateral circulation (20). Further research is needed to investigate the relationship between MHV and END.

This study has some limitations; it is a retrospective, single-center study with potential recall bias. The patients without FVH are more than patients with FVH significantly, which may led to a certain bias. We only performed semi-quantitative analysis on FVH. We may be able to perform further quantitative analysis with upgraded software. No guidelines have been developed to support reperfusion in patients beyond the time window for recanalization therapy. For stroke patients beyond the time window for recanalization therapy, who may develop END, it is vital to conduct a comprehensive clinical evaluation and administer early clinical interventions with individualized therapy to improve patient outcomes. More research is needed to investigate this topic.

For AIS patients beyond the time window for recanalization therapy who are receiving DAPT, a lower FVH-ASPECTS is associated with a higher risk of END. For patients with vascular occlusion/stenosis, FVH may predict END and unfavorable prognosis.

Reporting Checklist: The authors have completed the STROBE reporting checklist. Available at http://dx.doi.org/10.21037/apm-20-1175

Conflicts of Interest: All authors have completed the ICMJE uniform disclosure form (available at http://dx.doi.org/10.21037/apm-20-1175). The authors have no conflicts of interest to declare.

Ethical Statement: The authors are accountable for all aspects of the work in ensuring that questions related to the accuracy or integrity of any part of the work are appropriately investigated and resolved. The study was conducted in accordance with the Declaration of Helsinki (as revised in 2013), and was approved by the Ethics Committee of the Second Affiliated Hospital of Nantong University (No. 2020YL025). Written informed consent was obtained from all patients.