The role of palliative radiation therapy in treating pleural or peritoneal disseminated tumors: 22 cases and a review of the literature

Pleural or peritoneal dissemination from malignant tumors can occasionally induce tumorigenesis, and the resultant tumors may invade the surrounding tissues and cause pain or bleeding. If such tumors are identified by imaging approaches such as computed tomography, local radiation therapy (RT) may be selected to alleviate symptoms. However, few reports have focused on the effects of palliative RT or the optimal irradiation dose for pleural or peritoneal disseminated tumors. We assessed the significance of RT by investigating the purpose, effect, and dose of RT in patients who received palliative RT for pleural or peritoneal disseminated tumors arising from malignant tumors at our hospital between 2011 and 2019. We present the following article in accordance with the STROBE reporting checklist (available at http://dx.doi.org/10.21037/apm-19-495).

We retrospectively reviewed the data of 22 patients with pleural or peritoneal disseminated tumors treated with local RT between 2011 and 2019. The Kaplan-Meier method was used to determine the probability of disease-specific survival (DSS) from the date of completion of RT. This study was approved by our institutional review board of Nihon University Itabashi Hospital (Ref No. RK-191008-8). Informed consent was obtained from all patients and the study was performed in accordance with the Declaration of Helsinki (as revised in 2013).

Regarding the irradiated disseminated tumor location, tumors in the pleura occurred in 9 (40.9%) patients, peritoneum in 13 (59.1%) and 2 tumor occurred in peritoneum and umbilicus. Regarding the primary tumor, the most common tumor type was lung cancer, which was identified in 5 patients (22.8%) and all were irradiated for pleural disseminated tumors. Pancreatic cancer was the second most common cancer type and was diagnosed in 4 patients (18.2%). Two patients were irradiated for peritoneum and umbilical tumors. Concurrent metastasis of irradiated disseminated tumors at RT was observed in all but three patients. The most common purpose of RT was pain relief in 16 patients (72.7%). The second most common purpose was hemostasis in three patients (13.6%); specifically, RT was administered to stop direct bleeding from tumors in two patients and to treat hematuria due to bleeding from a tumor invading the bladder in one patient (1). The two patients without concurrent metastasis with irradiated disseminated tumors at RT were asymptomatic and were treated with RT for local control. Figure 1 shows RT dosimetry for peritoneum and abdominal wall disseminated tumors from pancreatic cancer with refractory pain. The most common RT regimen was 30 Gy/10 fractions (fr) in 13 patients (59.1%), and the total RT dose ranged widely, from 27 to 56 Gy. No grade 2 or higher RT-related toxicities (National Cancer Institute Common Terminology Criteria for Adverse Events 4.03) (2) were observed. The categories of bone metastases (3) were used to substitute for the categories of pain relief. Based on scores on a 0–10 numerical rating scale and the extent of analgesic use, complete and partial responses were achieved in four and four patients, respectively. Indeterminate responses were obtained in one patient. The timing of the measurement of response to pain relief ranged from 0 to 232 days with a median time of 21 days after RT completion. Overall response to pain relief was observed in 9 of 16 patients (56.3%) with pain before RT. Hemostasis or reduced bleeding was confirmed in 2 of 3 patients (66.7%) with bleeding before RT. In one patient with pre-existing superior vena cava (SVC) syndrome before RT, SVC syndrome resolved. Of 20 patients who had some symptoms before RT, 12 patients (60%) responded to RT. Survival time after RT completion ranged from 1 to 656 days with a median of 106 days (Figure 2). 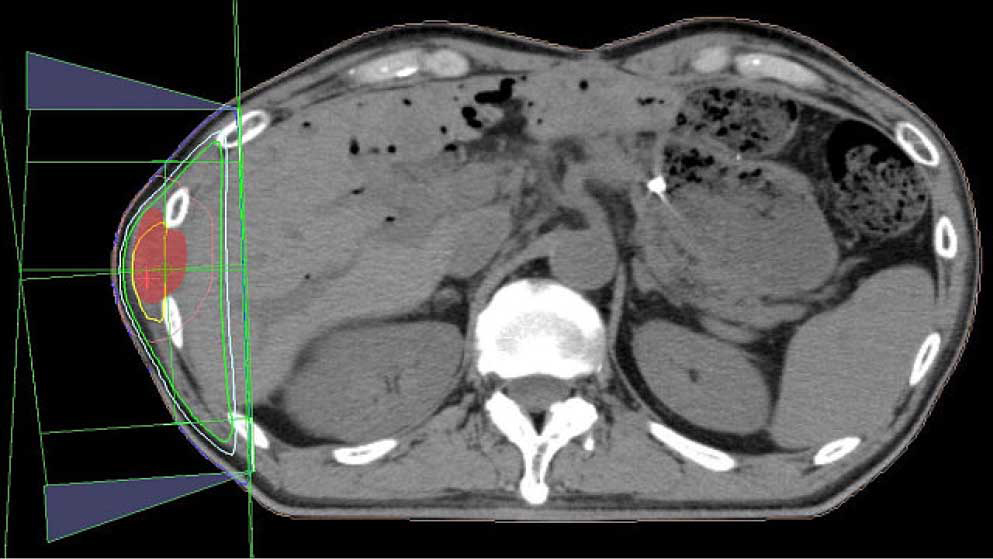 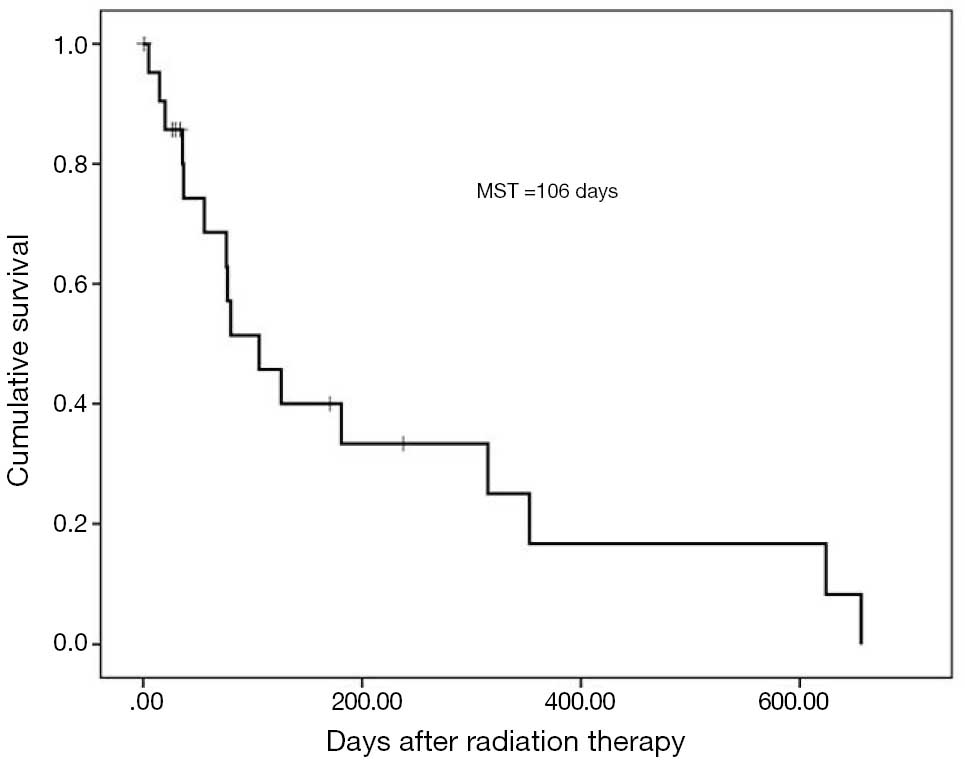 RT is widely known to have a role in preventing dissemination; hemithorax RT is administered after surgery for malignant mesothelioma and whole abdominal RT after surgery for ovarian cancer (4-7). However, local RT for pleural or peritoneal disseminated tumors has been described in only a few case reports. There have been no reports, to date, on its effects and the optimal radiation dose. Our literature search identified nine case reports of RT for peritoneal disseminated tumors. In five of these, RT was administered for pain relief, hemostasis, or symptom alleviation (Table 2). We also previously reported a case in which hemostasis was achieved with hemostatic-intent RT for hematuria caused by a peritoneal disseminated tumor invading the bladder (1). In all five reported cases, symptoms were successfully alleviated; however, the actual response rate to RT for symptom alleviation is unknown. The RT regimens described in the case reports widely ranged from 20 Gy/5 fr to 50 Gy/25 fr. The irradiation doses tended to be higher in patients without concurrent metastasis with irradiated disseminated tumors at RT. Meanwhile, no reports were identified concerning RT administration to alleviate symptoms associated with pleural disseminated tumors. Regarding RT for symptom alleviation, the role of RT in relieving pain due to bone metastasis has been established. For example, meta-analyses have shown an overall pain response rate of RT ranging from 58.7% to 62.1% and a complete pain response rate ranging from 23% to 34% (16-18). In our present study, the overall pain response was observed in 56.3% of patients with pain, with our therapeutic effect being slightly inferior to that for pain due to bone metastasis. This may be explained by the difference in the timing of the measurement of response rates. Previous studies involving patients with bone metastasis measured patients’ response rates at 3–6 weeks after RT completion (19-21). However, the response rate in our patients with pain was measured at a median of 21 days after RT completion. However, as the survival time after RT completion was short, pain response in five patients was measured at 0 or 1 day after RT completion. It seems that if RT is administered in the early stages to alleviate pain due to disseminated tumors, patients may survive until therapeutic efficacy can be attained.

In our present study, 30 Gy/10 fr, a RT regimen commonly used for bone metastasis, was delivered, but the median survival time (MST) after RT completion was as short as 106 days. Although short-term irradiation such as RT of 8 Gy in a single fraction for bone metastasis could also be considered, attention should be paid to RT doses that would be delivered to the surrounding gastrointestinal tract in cases with peritoneal disseminated tumors. Regarding the association between disseminated tumors and prognosis, the survival time after umbilical metastasis from various primary tumor sites, which is conventionally known as Sister Mary Joseph’s nodule, reportedly range from 1 week to 36 months, and the MST after umbilical metastasis from ovarian or uterine tube carcinoma is 26 months (22,23). Furthermore, a literature review of cutaneous metastases from pancreatic cancer, including umbilical metastasis, indicated that the survival time after cutaneous metastasis ranged from a few days to 19 months with a MST of 5 months (24). In this review, the survival time was significantly more improved in patients receiving any therapy including RT than in those receiving no therapy. In the current study, the MST after RT completion was 106 days. The association between RT and prognosis of disseminated tumors may differ depending on the primary tumor site or concurrent metastasis at RT. We will perform further studies to investigate the significance of RT for disseminated tumors from malignant tumors in terms of survival time by comparing patients receiving RT with those receiving no therapy.

Our findings indicate that if RT is administered in the early stages of cancer to alleviate pain due to disseminated tumors, patients may survive until therapeutic efficacy can be attained.

We thank H. Nikki March, PhD, from Edanz Group (www.edanzediting.com/ac) for editing a draft of this manuscript and helping to draft the abstract.

Reporting Checklist: The authors have completed the STROBE reporting checklist. Available at http://dx.doi.org/10.21037/apm-19-495

Conflicts of Interest: All authors have completed the ICMJE uniform disclosure form (available at http://dx.doi.org/10.21037/apm-19-495). The authors have no conflicts of interest to declare.

Ethical Statement: The authors are accountable for all aspects of the work in ensuring that questions related to the accuracy or integrity of any part of the work are appropriately investigated and resolved. This study was approved by our institutional review board of Nihon University Itabashi Hospital (Ref No. RK-191008-8). Informed consent was obtained from all patients and the study was performed in accordance with the Declaration of Helsinki (as revised in 2013).