Diagnosis and treatment of lymphocutaneous dermatosis caused by Nocardia brasiliensis: a case report

Primary cutaneous nocardiosis caused by Nocardia brasiliensis is an uncommon disease in clinical practice (1). The clinical and radiological characteristics of the disease mean that misdiagnosis is common, which often leads to the condition becoming aggravated, or even death (2-4). Here, we report a case of lymphocutaneous dermatosis in an 87-year-old Chinese man infected with Nocardia brasiliensis. We present the following case in accordance with the CARE reporting checklist (available at http://dx.doi.org/10.21037/apm-20-1301).

An 87-year-old male patient presented at our hospital with a 10-day history of erythema and papules on his left arm with no obvious cause. Then the papules burst and erosion appeared (Figure 1A). Oral cephalosporin treatment administered in a local clinic did not improve the patient’s condition. The skin damage extended to the forearm and cubital fossa. The patient developed erythema and nodules, gradually forming abscesses, which ruptured causing pain. The patient had a 7-year history of coronary heart disease, with long-term use of oral cardiac medication, and active asthma symptoms. A diagnosis of lymphocutaneous sporotrichosis was considered according to the characteristic skin lesions. 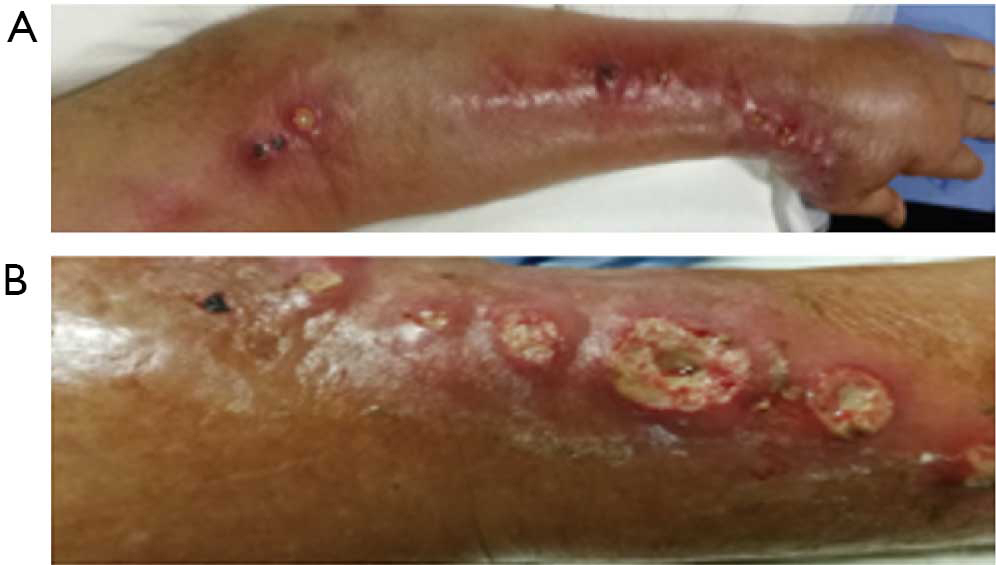 Figure 1 Skin lesions infected with Nocardia brasiliensis and the treatment response. (A) Skin lesions on the left forearm, upper arm, and left thumb; (B) some skin lesions had ruptured, producing purulent secretions and ulceration.

History of past illness

The patient had a 7-year history of coronary heart disease, for which he had been taking long-term oral cardiac medication.

The patient had no history of hypertension or diabetes, and no similar disease in the family.

Physical examination of the patient in the dermatology department of our hospital showed there to be extensive erythema and papules with rupture and purulent secretion on the left arm. Additionally, edema and erythema with nodules and abscesses of various sizes were observed on the left forearm and elbow. The tubercle was hard and had partially ruptured at the top, with secretions and ulceration. The lesions were distributed as beads along the lymphatic vessels, and the back of the left hand was observed to be swollen (Figure 1). The patient was initially diagnosed with lymphocutaneous sporotrichosis. 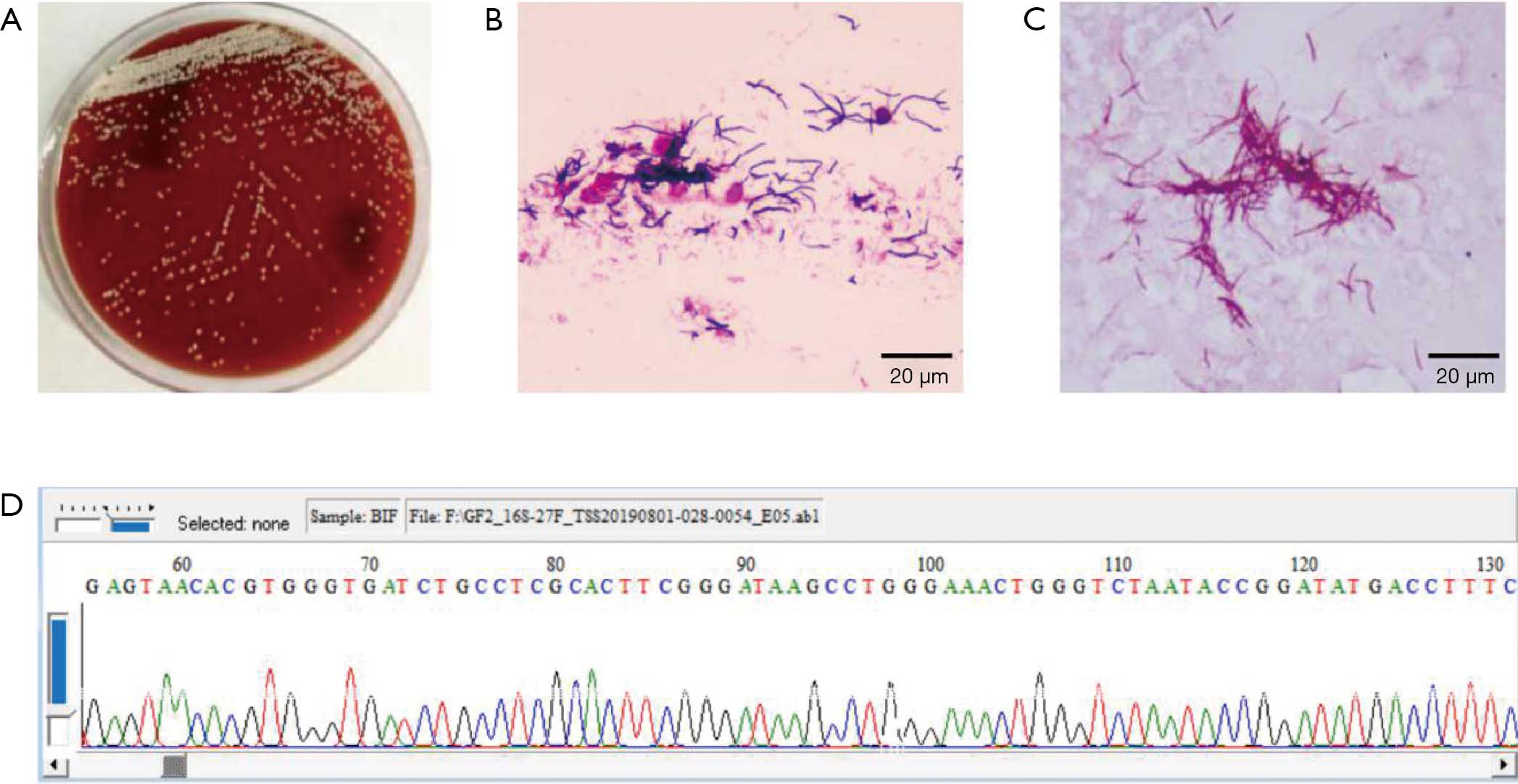 Based on the above tests and examination results, the patient’s final diagnosis was lymphocutaneous nocardiosis.

Anti-infective therapy with compound trimethoprim-sulfamethoxazole (TMP-SMX, 0.96 g, 3 times/day) combined with amoxicillin clavulanate potassium (1.2 g, 3 times/day) was administered for 10 days, followed by sulfamethoxazole alone, debridement of abscesses, and external application of normal saline on the purulent areas for 20 days. After 30 days’ treatment, the abscess was treated with repeated pus extraction, debridement of erosion and ulcer, wet compress of povidone iodine solution and spectrum of multi-source instrument. The rash on the patient’s left arm had become dry and scabby. The scabs subsequently fell off, the swelling in the left elbow subsided, purulent secretion decreased, and the rash mostly subsided (Figure 3).

Figure 3 After 4 weeks of treatment, the skin lesions were dry, scabby, and without concentrated secretion.

Nocardia is an opportunistic pathogen commonly found in decaying animals and plants, soil, dust, and air, which can cause lung, skin, central nervous system, and disseminated infections. It is an aerobic actinomycete with Gram-positive staining of filamentous areas and weakly positive acid-fast staining. Common Nocardia species include Brazil Nocardia, Star Nocardia, Africa Nocardia, Anthrax Nocardia, and abscess Nocardia (1,2). While nocardiosis often occurs in individuals who have low immune function, it can also affect individuals with normal immune function. Nocardia primarily infects the body following inhalation, which mainly causes pulmonary infection that can easily be misdiagnosed as pulmonary tuberculosis or pulmonary tumor (5). Some Nocardia infections result in skin ulceration, or hematogenous dissemination. Nocardiosis cutis, which is mainly caused by infection with Nocardia, can be divided into primary and secondary infection (primary superficial nocardiosis and lymphocutaneous nocardiosis) (4,6). Lymphocutaneous nocardiosis initially presents as ulcerative plaques at the site of inoculation, before the infection diffuses through the lymphatics, causing lymphangitis and subcutaneous erythematous nodules, which upon rupturing may discharge pus and sulfur-like particles (7).

The primary diagnosis of lymphocutaneous nocardiosis is based predominantly on local skin plaques and ulcers, lymphangitis resulting from rapid spread along the lymphatics, as well as subcutaneous erythema, nodules, ulcers, and other clinical manifestations. The primary diagnosis is mainly informed by the results of Gram staining and acid-fast staining (positive), mass spectrograph revealed Nocardia brasiliensis. 16S rRNA sequencing usually forms the basis for accurate diagnosis. Lymphocutaneous nocardiosis can easily be misdiagnosed as Cutaneous lymphosporidiosis, which usually occurs after a wound is exposed to sporotrichosis due to minor trauma and is mainly manifested as chronic infection of the skin, subcutaneous tissue, and nearby lymph nodes, as well as erythema, nodules, and ulceration. Misdiagnosis of lymphocutaneous nocardiosis as atypical molecular bacilli, erysipelas, cellulitis, erythema nodosum, or another disease is also possible.

Because of variations in the pathogenicity and antibiotic sensitivity of different Nocardia species, there is currently no unified standard treatment for Nocardial infection. Sulfonamides (including trimethoprim and sulfamethoxazole) are considered to have the greatest effect in the treatment of Nocardia infections. However, there are a number of reports of patients showing resistance to these drugs (8,9). Imipenem, ceftriaxone, linezolid, levofloxacin, amikacin, amoxicillin clavulanate potassium, clarithromycin, and cefotaxime, are some of the drugs that can be used in place of or in combination with sulfonamides (10), and can reduce the drug resistance of xanthamines. Clinical treatment depends on the patient’s drug sensitivity and the severity of their condition.

In the case described here, we treated the infection using the combination of sulfamethoxazole and amoxicillin clavulanate potassium. Initially, the patient was treated with anti-infective therapy for 2 weeks in the form of compound sulfamethoxazole (TMP/SMX; 0.96 g, 3 times/day) combined with amoxicillin clavulanate potassium (1.2 g, 3 times/day). This was followed by sulfamethoxazole treatment for another 2 weeks, as well as abscess debridement and external application of normal saline to the purulent areas. After 4 weeks of treatment, the ulceration and purulent secretion had decreased, and the rash, redness, and swelling had subsided.

This case illustrated that lymphocutaneous nocardiosis can be misdiagnosed as sporotrichosis based on its clinical manifestations. Nocardiosis should be considered when skin nodules and ulcers that show no response to conventional treatment are observed. To assist with diagnosis, mass spectrograph revealed Nocardia brasiliensis, 16S rRNA sequencing to identify bacterial DNA can be performed. For nocardiosis caused by Nocardia brasiliensis, sulfamethoxazole combined with amoxicillin clavulanate potassium is an effective anti-infective therapy.

Reporting Checklist: The authors have completed the CARE reporting checklist. Available at http://dx.doi.org/10.21037/apm-20-1301

Conflicts of Interest: All authors have completed the ICMJE uniform disclosure form (available at http://dx.doi.org/10.21037/apm-20-1301). The authors have no conflicts of interest to declare.