Epidemiological research that uses database or medical records generated by clinicians to analyse relationships between outcomes plays a critical role in clinical practice (1,2). One important limitation of an epidemiological study design is the occurrence of missing data owing to various reasons during the data collection process (3). In such cases, most researchers ignore the missing data and perform a “complete-case analysis” (4,5), which can be a significant bias that weakens the results or conclusions of the research (6). Therefore, how to process missing data can be a critical issue in modern epidemiological research.

Body mass index (BMI, in kg/m2) is a basic physical characteristic used in almost all health-related research and is associated with important health-related outcomes such as mortality (7). Particularly, a lower BMI is associated with malnutrition (8), which has been linked to increased hospital mortality in critically ill patients who are admitted to the intensive care unit (ICU) (9). However, because accurate measurements of height and weight are necessary at the time of study to calculate BMI, many epidemiological types of research have missing data on BMI, which can affect the outcome (10-12). For example, when a patient was admitted to the ICU and required rapid resuscitation, BMI measurements might have been delayed and influenced by the rapid fluid resuscitation. Additionally, data might be missing owing to the human error of the nurse who recorded the height or weight of the patients admitted to the ICU. Therefore, multiple imputation for missing data is recommended to overcome such limitation (13); however, there is insufficient research on this topic.

This study investigated the association between BMI at the time of ICU admission and 90-day mortality risk of critically ill patients in complete-case datasets that ignores missing data, as well as in datasets with multiple imputation for missing data. The length of ICU and hospital stay of both datasets were also investigated.

We present the following article in accordance with the STROBE reporting checklist (available at http://dx.doi.org/10.21037/apm-20-203).

This retrospective cohort study was approved by the Institutional Review Board (IRB) of Seoul National University Bundang Hospital (SNUBH) (IRB approval number: B-1806/474-105). Because of the retrospective design of the study, the requirement for informed consent was waived by the IRB. The study also conformed to the provisions of the Declaration of Helsinki (as revised in 2013).

This study included the medical records of patients aged ≥18 years who were admitted to the ICU at a single tertiary care academic hospital between January 2012 and December 2017. All ICU admission cases during the period were screened by medical record technicians who were blinded to the study objective. If one patient was admitted to the ICU more than twice during the period, only the last ICU admission case that would have been the most severe was included. Cases of patients aged <18 years were excluded, as well as cases with missing data other than BMI.

This study used data archived in the Bundang Hospital Electronic System for Total Care (BESTCare), an electronic medical record system of SNUBH (14). Additionally, the dates of death of all patients as of 16 May, 2018, including those lost to follow-up, were collected from the Statistics Korea database (http://kostat.go.kr/portal/eng). As a central government organization for statistics, Statistics Korea provides services related to overall planning and coordination of national statistics.

During the study period, the ICU of SNUBH used beds that can measure patient’s weight, which was generally assessed more than once per day. Unlike weight, height was directly measured if the patient could stand, or information provided by the patient was recorded if the patient could not stand. We used the weight or height recorded within 24 hours of ICU admission to calculate BMI at ICU admission. Therefore, if there was no record of BMI within 24 hours of ICU admission, it was considered missing data. Errors in BMI records were also considered missing data. There was a two-step process in identifying errors in BMI values. First, we screened patients with BMI values <2.5th or >97.5th percentile as outliers in the distribution of BMI data at ICU admission (15). Then, considering there might be extreme cases such as morbidly obese, severe cachexia, or scoliosis patients, we calculated the mean BMI values with standard deviation (SD) during the hospitalization period of patients who were screened by these outlier cut-off values (<2.5th or >97.5th percentile). If patients had a BMI value at ICU admission within 3 SD from the mean value of BMI during hospitalization, it was not considered as an error. For analysis, the BMI data were classified into four groups according to the Garrow classification (16): underweight (<20 kg/m2), normal (20.0–24.9 kg/m2), overweight (25–29.9 kg/m2), and obese (≥30 kg/m2).

The primary endpoint was to investigate the association between BMI and 90-day mortality risk in the complete-case group and multiple imputation group. The secondary endpoints consisted of determining how the length of ICU or hospital stay and BMI were associated with each group.

First, t-tests for continuous variables and chi-square tests for categorical variables were used to determine if there was a difference in each variable depending on whether BMI was missing or not.

To analyse the secondary endpoint, we used multivariable generalized linear regression analysis. In this model, the length of ICU and hospital stay, a dependent variable, did not follow normality (Kolmogorov-Smirnov test: P<0.05); thus, the Poisson distribution was assumed, and the log link function was used. Results of the Cox regression analysis were presented as hazard ratios (HRs) with 95% confidence intervals (CIs), whereas results of the generalized linear regression analysis were presented as exponentiated regression (Exp.) coefficients with 95% CIs. In all models, the normal group (20–25 kg/m2) was set as the control group for the BMI group analysis. The results from each analysed dataset were combined using Rubin’s rules.

The rms package of R was used for RCS (version 3.3.2 with R packages), and SAS software version 9.4 (SAS Institute Inc., Cary, NC, USA) was used for all other analyses, including multiple imputation for missing values of BMI at ICU admission. For all analyses, P<0.05 was considered statistically significant. 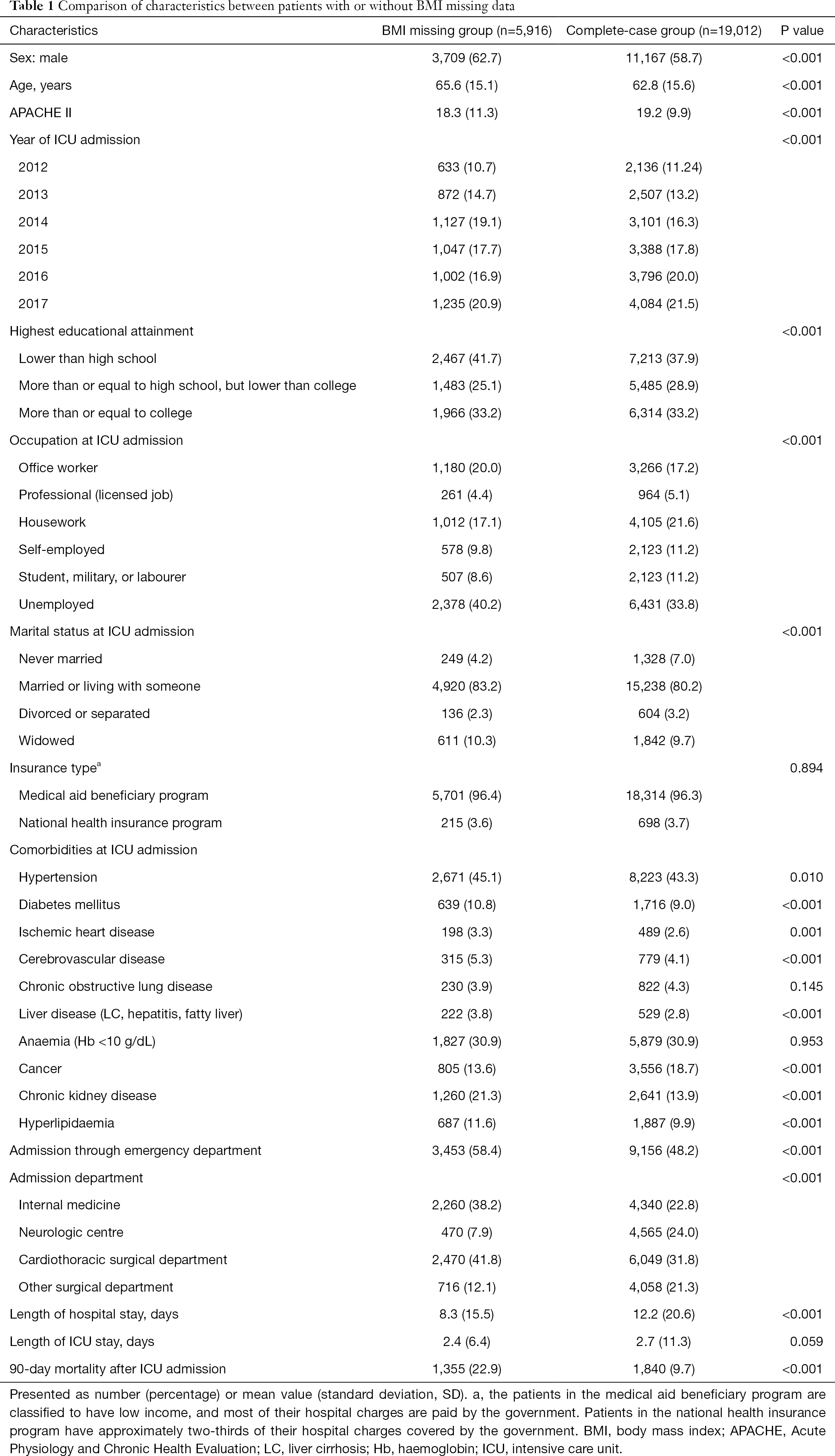 BMI distribution before and after multiple imputation

90-day mortality before and after missing-data imputation

This study showed that the association of BMI at ICU admission with 90-day mortality might be different according to the statistical handling of missing data, such as multiple imputation. This tendency was similar for the length of ICU or hospital stay. Moreover, results of the Cox regression model suggested that the complete-case analysis, ignoring missing BMI data, may have led to a slight overestimation of the 90-day mortality risk in the underweight group (<20 kg/m2) compared with that in the normal group (20–24.9 kg/m2). However, in terms of the length of ICU and hospital stay, our findings suggested the potential underestimation of the effect of BMI in the overweight group (25–29.9 kg/m2) and obese group (≥30 kg/m2) compared with that in the normal group (20–24.9 kg/m2). Above all, the present study suggested that replacing missing BMI values by multiple imputation modelling could be an acceptable procedure to reduce bias.

The most important issue in this study was the missing mechanism of BMI at ICU admission because it was closely related to the effect of missing BMI values on outcomes such as mortality or length of ICU and hospital stay. In Table 1, many differences were noted between the complete-case group and missing BMI group, indicating that an analysis of just the complete-case group could cause a significant bias (19). In detail, the distribution of BMI before and after multiple imputation modelling showed that the proportions of the underweight, overweight, and obese groups were slightly increased after multiple imputation modelling, compared with the complete-case group. In general, both underweight and obese critically ill patients had a higher risk of clinical outcomes after ICU admission (20,21), and our data suggested that the missing BMI value at ICU admission occurred more in underweight or obese patients.

Our study result of increased mortality in the multiple imputation group compared with that in the complete-case group is consistent with the results of an epidemiological study based on the recent Scottish National Diabetes Register (11). This implies that more patients with severe conditions were distributed in the multiple imputation group. Meanwhile, the mean value of the APACHE II scores was lower in the BMI missing group than in the complete-case group, and the length of hospital stay was also shorter in the BMI missing group than in the complete-case group in this study. Comprehensively, this suggests that multiple imputation group might have included many patients of relatively very high or very low severity. Hence, relatively healthier patients who were transferred from the ICU to the wards might have had missing BMI data owing to short admission duration. In contrast, BMI data might have been missing in patients who died soon after ICU admission or in severely ill patients for whom the medical staff could not afford the time to measure and record BMI.

Our institution recently reported that the lower the BMI, the greater the risk of postoperative mortality and mortality after ICU admission (24,25). However, those studies performed a complete-case analysis that ignored missing BMI values. Consequently, as BMI decreased, mortality increased rapidly in RCS in previous studies. However, in the present study, the complete-case group had RCS that depicted a slightly steeper slope with a lower BMI compared with RCS in the multiple imputation group, as shown in Figure 2. This difference in RCSs shows that complete-case analysis may produce an overestimated risk of the mortality of underweight patients in the ICU.

This study has some limitations. First, because this was a retrospective cohort study, there were many confounders that needed to be controlled by multivariable adjustment. Second, it was conducted at a single centre, which limits the generalisability of its findings. For example, as a characteristic of the Korean population, the proportion of morbidly obese (BMI >40 kg/m2) patients is relatively low at 0.1% compared with 5.4% reported in studies of other regions (26). Third, some data on height may have been inaccurate in patients who could not stand to measure height. In these patients, height at ICU admission was recorded by self-report by patients. Because self-report by patients is known to be biased (27), it might be a limitation in this study. Fourth, the fully conditional specification method we used would result in biased estimates if the imputation model was mis-specified. Finally, estimated values calculated in the multiple imputation model were based on the observed data in this study. Therefore, the imputed BMI data can be biased from unobserved properties and assumptions in the model. Although we performed Little’s test to show that the missing mechanism of BMI was not MCAR, the possibility of MNAR being the missing mechanism is still possible in this study. Therefore, to assume MAR as a missing mechanism in this study, we considered maximum variables related to missing BMI values in the multiple imputation modelling.

Reporting Checklist: The authors have completed the STROBE reporting checklist. Available at http://dx.doi.org/10.21037/apm-20-203

Conflicts of Interest: All authors have completed the ICMJE uniform disclosure form (available at http://dx.doi.org/10.21037/apm-20-203). The authors have no conflicts of interest to declare.

Ethical Statement: The authors are accountable for all aspects of the work in ensuring that questions related to the accuracy or integrity of any part of the work are appropriately investigated and resolved. This retrospective cohort study was approved by the Institutional Review Board (IRB) of Seoul National University Bundang Hospital (SNUBH) (IRB approval number: B-1806/474-105). Because of the retrospective design of the study, the requirement for informed consent was waived by the IRB. The study also conformed to the provisions of the Declaration of Helsinki (as revised in 2013).