The effect of an overall healthy lifestyle on early-onset stroke: a cross-sectional study

Stroke is the second leading cause of death and the third main cause of disability in the world, accounting for 6.5 million deaths and 113 million disability-adjusted life years (DALY) (1). Although stroke is more common among older adults, the incidence rate of stroke occurring in young and middle-aged adults has gradually increased by over 40% in the past few decades (2-5). The high healthcare costs and loss of labor productivity caused by stroke and the consequent and substantial socioeconomic burden has led to early-onset stroke being considered a significant public health issue (6). Therefore, it is of great importance to identify cost-effective strategies for the prevention and early screening of early-onset strokes.

Previous studies found that more than 90% of the stroke burden was attributable to modifiable risk factors, such as cigarette smoking, alcohol consumption, poor diet, physical inactivity, and high body mass index (BMI) (6,7). Smoking, drinking, increased consumption of red meat, and high BMI were associated with an increased risk of stroke (7-9), while regular physical activity and increased consumption of fruit and vegetables significantly reduced the risk of stroke (7,8,10). Moreover, adhering to an overall healthy lifestyle of not smoking, engaging in moderate to high physical activity, eating a healthy diet, and having a healthy BMI, has been associated with a substantially lower risk of stroke (11,12).

However, few studies have investigated the association between a healthy lifestyle and early-onset stroke. Choi-Kwon et al. reported that early-onset stroke patients were less compliant in the cessation of cigarette smoking and regular exercise than late-onset stroke patients (13). A population-based cohort study in Sweden also found the incidence rate of stroke patients who were men under the age of 45 consumed ≥20 cigarettes per day, which led to them being more than 6 times more likely than nonsmoking men to have a stroke. Therefore, a dose-response association exists between smoking and risk of stroke before 45 years of age (14). Another case-control study conducted in young stroke patients revealed that an approximate 78% risk of stroke was attributable to four potentially modifiable risk factors (hypertension, low physical activity, smoking, and alcohol consumption) (15). Likewise, low green vegetable consumption was also shown to be associated with stroke occurring before the age of 50 years old (16). Nevertheless, the effect of an overall healthy lifestyle on early-onset stroke has still not been satisfactorily clarified.

Thus, in the present study, we aimed to investigate the impact of an overall healthy lifestyle on early-onset stroke among Chinese hospitalized stroke patients.

We present the following article in accordance with the STROBE reporting checklist (available at http://dx.doi.org/10.21037/apm-19-656).

This cross-sectional study was conducted over a period of 12 months (January 2017–January 2018). The study included 870 patients who were admitted to First People’s Hospital of Changzhou and were diagnosed with cerebrovascular diseases. Inclusion criteria were as follows: (I) patients who agreed to participate in the study and signed the informed consent form, (II) patients underwent computed tomography (CT) or magnetic resonance imaging (MRI) scans to confirm the presence of cerebrovascular disease. The exclusion criteria included: (I) subarachnoid hemorrhage; (II) transient ischemic attack without progression to stroke; (III) lacunar infarction; (IV) missing information on BMI, smoking status, physical activity, or dietary data at stroke diagnosis. Eventually, 821 stroke patients were included (Figure 1). 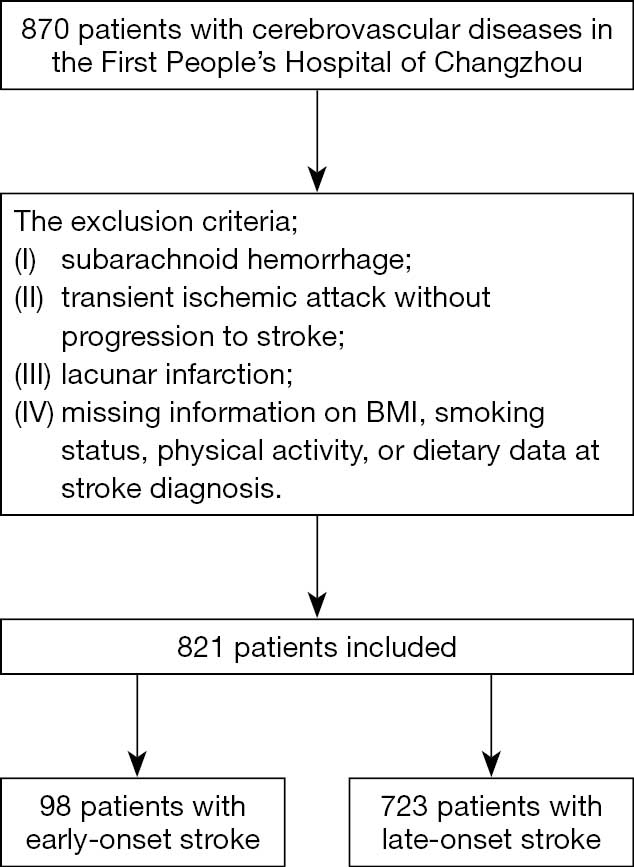 This study was conducted according to the Declaration of Helsinki principles (as revised in 2013) and approved by the Institutional Review Board in the First People’s Hospital of Changzhou (No. 2020025). Informed consent was obtained from all individual participants included in the study.

Anthropometric measurements were performed by trained personnel who collected information on blood pressure, height, and weight. After a 5-minute rest, blood pressure was measured twice with a 1-minute interval on the non-dominant arm (OMRON Model HEM-752 FUZZY, Omron Company, Dalian, China). The average of two measurements was used for analysis. The body weight and height of participants were measured while they were in barefoot and wearing light clothing. BMI was calculated as weight in kilograms divided by height in meters squared (kg/m2).

In the present study, continuous variables are presented as the mean ± standard deviation for normally distributed variables and median (interquartile) for skewed variables. Categorical variables are presented as numbers (proportions). The comparisons of characteristics between early-onset stroke patients and the other stroke patients used chi-square tests for categorical variables and Student’s t-tests for continuous variables. Chi-square tests were used to compare the prevalence of overall healthy lifestyle and each of its component between early-onset stroke patients and late-onset stroke patients. Multivariate logistic regression was used to analyze the associations of early-onset stroke with no smoking, moderate to high physical activity, healthy diet, normal BMI, and overall healthy lifestyle. Model 1 was adjusted for age and sex; model 2 was further adjusted for drinking status, self-reported history of heart disease, systolic blood pressure (SBP), and diastolic blood pressure (DBP), FPG, TG, and TC based on model 1; model 3 was further adjusted for antihypertensive agents, lipid-lowering agents, and antidiabetic agents based on model 2.

Characteristics of the study population 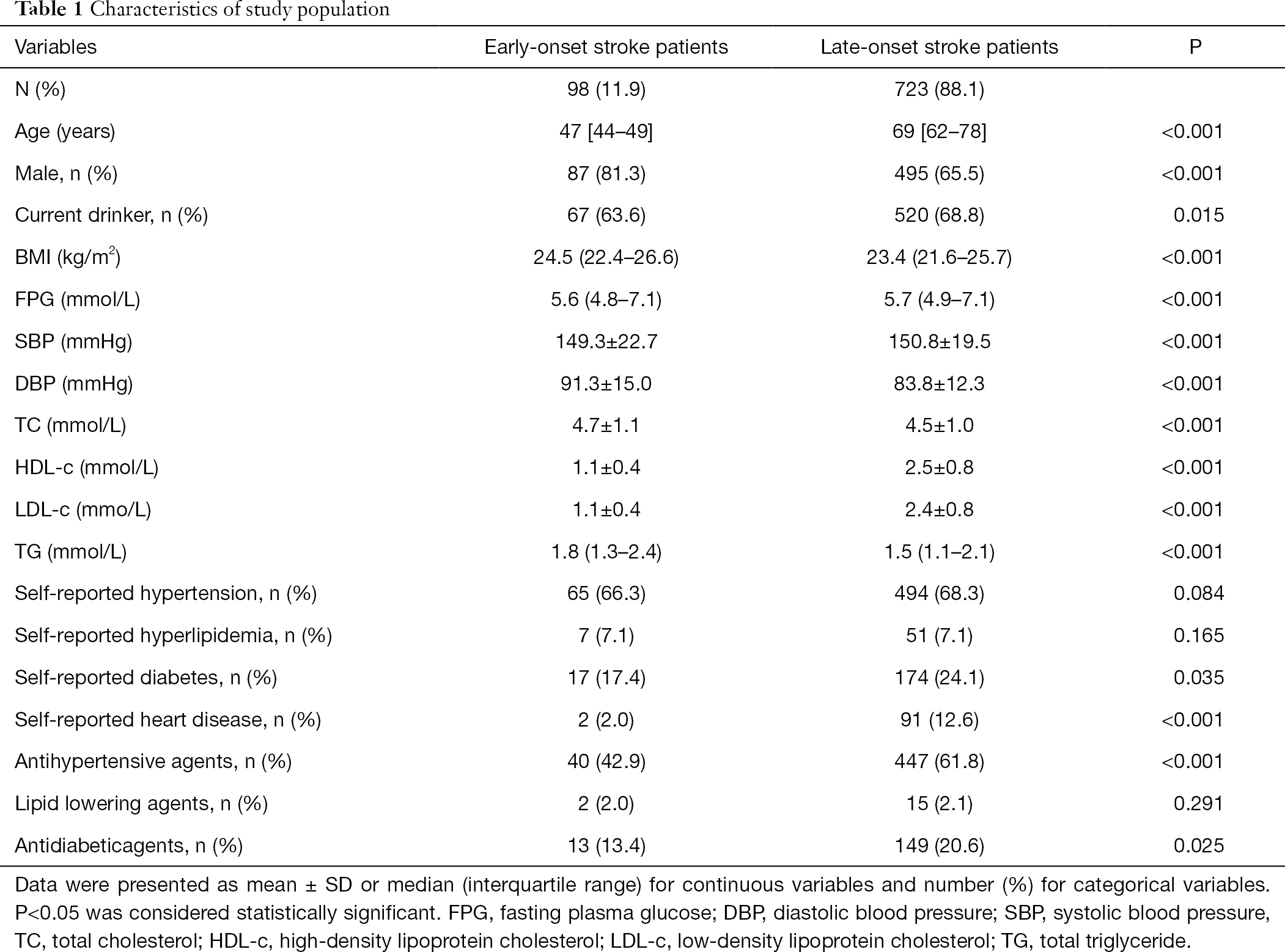 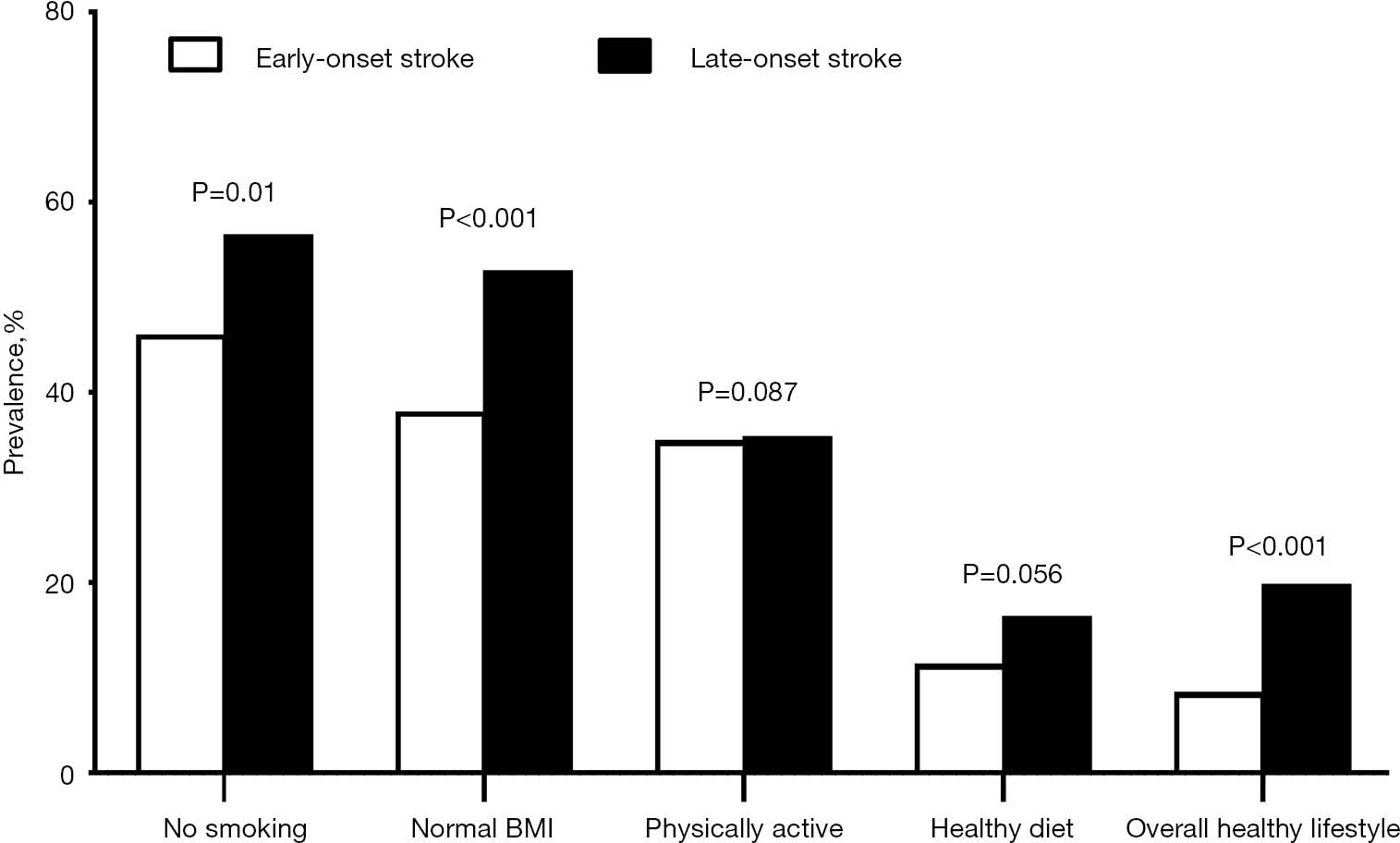 Figure 2 Prevalence of overall healthy lifestyle and each of its separate components in the study population according to stroke-onset status. Data are presented as percentages for categorical variables. A P value <0.05 was considered statistically significant. BMI, body mass index.

Healthy lifestyle factors and the risk of early-onset stroke 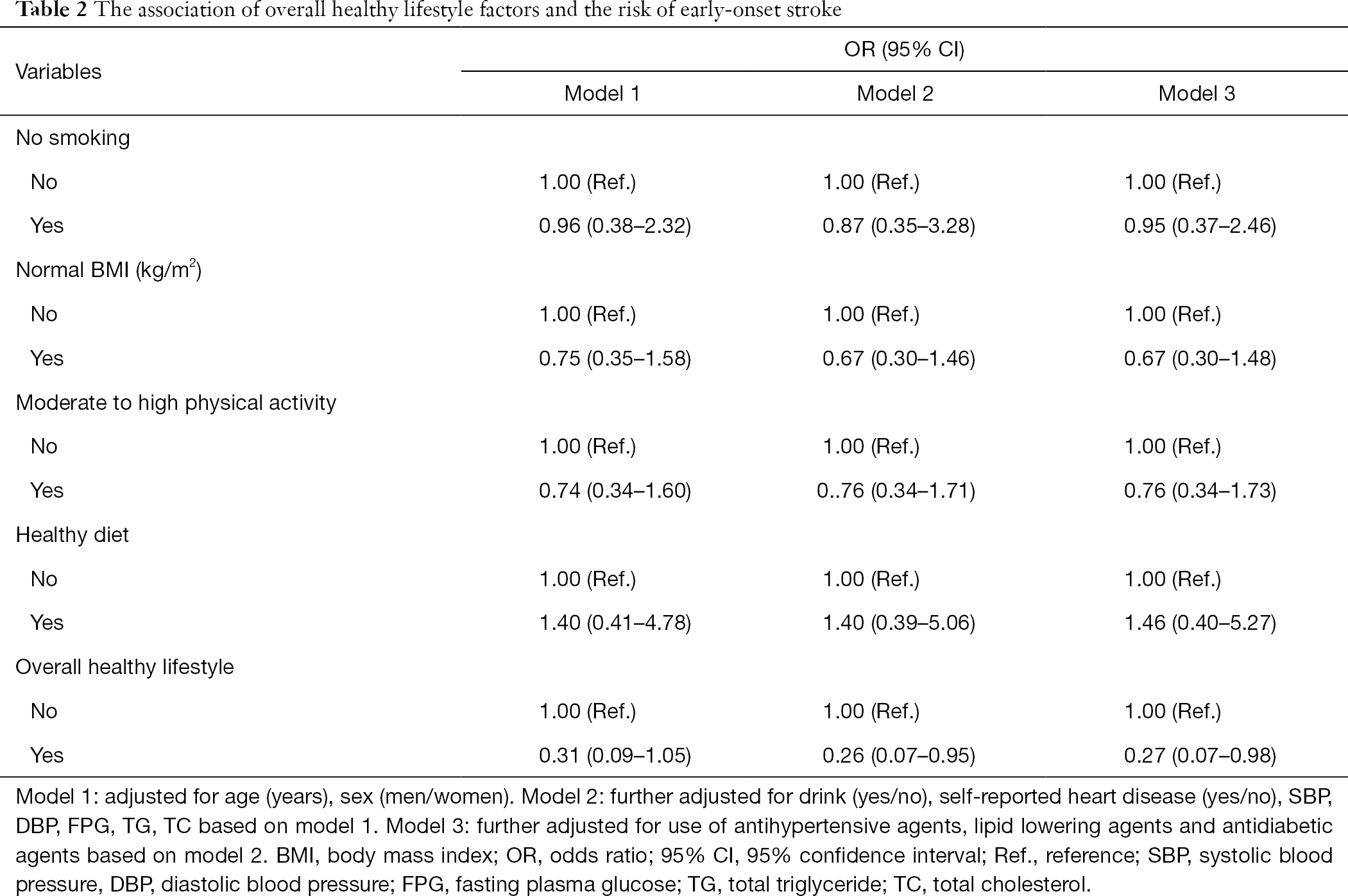 Stroke are a complex disease caused by both genetic and environmental factors. As genetics, age, sex, and ethnicity are non-modifiable factors, metabolic status, and lifestyle choices may be more helpful to understanding the incurrence of stroke (26). Recently, some studies have focused on the effects of lifestyle factors on early-onset stroke. A higher risk (HR: 1.88) of stroke among the current smokers versus never smokers has been observed in a population-based case-control study focusing on the risks of ischemic stroke in men aged 15 to 49 years (27). A BMI ≥25 kg/m2 significantly increased general cardiovascular risks and specific risks of stroke including young stroke cases (28). The INTERSTROKE study, a large international case-control study, recruited 13,447 stroke cases and found that regular physical activity and a healthy diet reduced the risk of stroke among adults aged 55 years old or younger (OR: 0.60, 95% CI: 0.45–0.80 and OR: 0.68, 95% CI: 0.55–0.86, respectively). Current smoking and heavy alcohol intake also increased the risk of stroke (OR: 1.66, 95% CI: 1.36–2.02 and OR: 2.20, 95% CI: 1.49–3.23, respectively) (29). In our study, after adjustment for confounding factors, no statistically significant association was detected between any single lifestyle factor (no smoking, moderate to high physical activity, healthy diet, and normal BMI) and risk of early-onset stroke, which is inconsistent with previous studies. This may be attributed to the small sample size and participants recruited from a single center. However, the overall healthy lifestyle was significantly associated with the decreased risk of early-onset stroke, which was in line with the previous studies.

The major strength of our study was the design of investigating the overall effects of healthy lifestyle factors on the risk of early-onset stroke. To our knowledge, this is the first population-based study that showed an association between an overall healthy lifestyle and a reduced risk of early-onset stroke. Additionally, the diagnosis of stroke was dependent on the imaging, which was more accurate than self-reported events in other studies. However, several limitations of our study should also be noted. Firstly, the sample size of our research was not large, with 98 early-onset stroke cases and 723 late-onset stroke cases (16,30). However, participants in the present study were measured by CT/MRI, and inpatients were diagnosed by physicians; these measures are more reliable than large sample sizes of self-reported medical histories.

Moreover, the proportion of early-onset stroke is similar to previous studies. Ekker reported that 1 in 10 strokes were in young adults (25), while in our study, 11.9% [98] were early-onset stroke patients. Secondly, our study was retrospective in design, so a causal inference cannot be drawn, and thus the prospective study is warranted in the future. Thirdly, our study was conducted in Chinese hospitalized patients. Hence, caution should be taken in generalizing the results to other ethnicities. Finally, the information on lifestyle factors was self-reported, so some recall bias was unavoidable in our study. The additional validation of lifestyle factors should be undertaken in a future follow-up study.

Funding: This study was supported by grants from the Special Foundations for Key Research and Development of Jiangsu Province (BE2016659), Changzhou High-Level Medical Talents Training Project (2016ZCL J020), and the Applied Basic Research Programs of Changzhou (CJ2018044).

Reporting Checklist: The authors have completed the STROBE reporting checklist. Available at http://dx.doi.org/10.21037/apm-19-656

Conflicts of Interest: All authors have completed the ICMJE uniform disclosure form (available at http://dx.doi.org/10.21037/apm-19-656). The authors have no conflicts of interest to declare.

Ethical Statement: The authors are accountable for all aspects of the work in ensuring that questions related to the accuracy or integrity of any part of the work are appropriately investigated and resolved. The present study was approved by the Institutional Review Board in the First People’s Hospital of Changzhou (No. 2020025) and was conducted in compliance with the Declaration of Helsinki (as revised in 2013). Written informed consent forms were obtained from all subjects.