Autoimmune encephalitis refers to a kind of disease, in which the immune system of the body responds to the antigens and antibodies produced by central nervous system antigens, resulting in central nervous system damage. The etiology may be the interaction of some autoantibodies, active cells, or related factors with proteins and receptors on the surface of neurons in the central nervous system, resulting in changes in synaptic transmission, synaptic plasticity and neuronal excitability, thereby leading to a series of corresponding clinical symptoms. The main clinical manifestations are seizures, cognitive dysfunction, consciousness disorders, mental behavior disorders, autonomic nervous dysfunction and ventilation disorders (1).

Although an increasing number of studies have been conducted on autoantibodies of the nervous system, autoantibodies could not be detected in a relative proportion of child patients with suspected immune-induced central nervous system. Hence, its diagnosis and treatment remain challenging. The data of 28 child patients with autoimmune encephalitis diagnosed in our department within two years and the follow-up results are reported, as follows. We present the following article in accordance with the STROBE Reporting Checklist (available at http://dx.doi.org/10.21037/apm-19-484).

A total of 28 child patients with autoimmune encephalitis, which comprised of 19 males and nine females, who were treated in our Hospital from January 2015 to January 2017, were enrolled in the present study. The onset age varied from eight months old to 11 years and four months old. This study was conducted in accordance with the Declaration of Helsinki (as revised in 2013) and approved by the ethics committee of Qilu Hospital of Shandong University (KYLL-2020(KS)-613). All child guardian had signed the informed consent.

According to the diagnostic criteria for autoimmune encephalitis published by Lancet Neurology in 2016 (4), the diagnosis can be made when the following four criteria are met:

Manifestations of encephalopathy in children: A decline or change in level of consciousness, lethargy, and personality changes or behavioral changes, and at least one of the following clinical manifestations would occur: neuropsychiatric symptoms, epilepsy, motor disorders, and cognitive disorders. Other types of encephalitis are excluded.

The clinical data of 28 child patients diagnosed with autoimmune encephalitis were analyzed. The short-term data of patients were obtained by telephone follow-up or electroencephalogram (EEG) follow-up.

The NIHON KOHDEN 32-channel VEEG-1200-C system was used for the video EEG monitoring. The 19-lead recording electrodes were placed in accordance to the international 10–20 system, and the electromyography (EMG) on the surface of bilateral deltoid muscles was simultaneously recorded. A 4-hour EEG was recorded for the child patients, including a complete wake-sleep-arousal cycle. Video electroencephalogram (VEEG) monitoring was performed after admission, and was followed up after three months (multiple VEEG monitoring could be performed, as required).

One child suffered from postnatal asphyxia complicated with ischemia and hypoxia, one child had postnatal mild hypoxia, three children had growth and development lag behind the normal children of the same age, two children had febrile convulsion, and one child epilepsy. 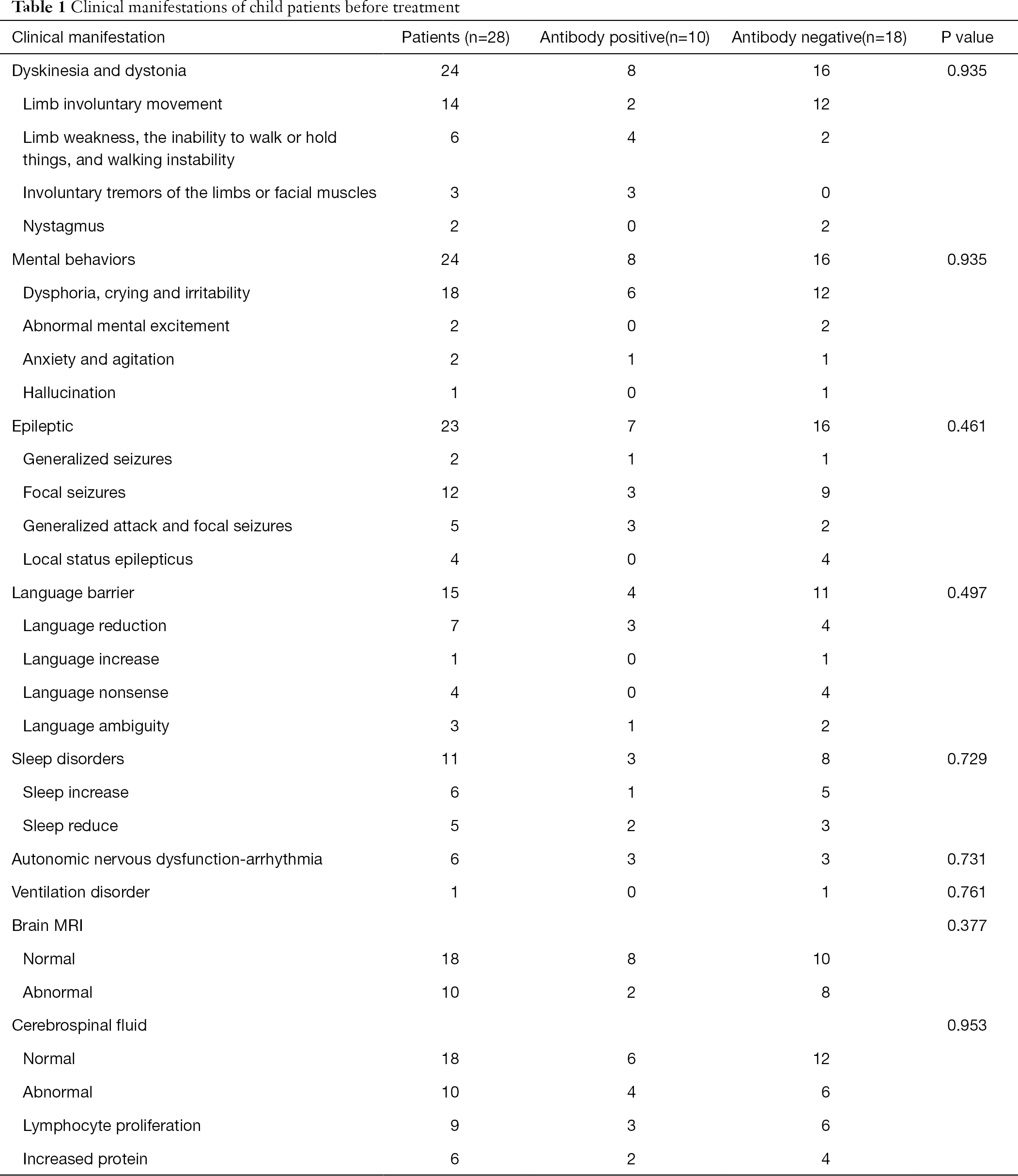 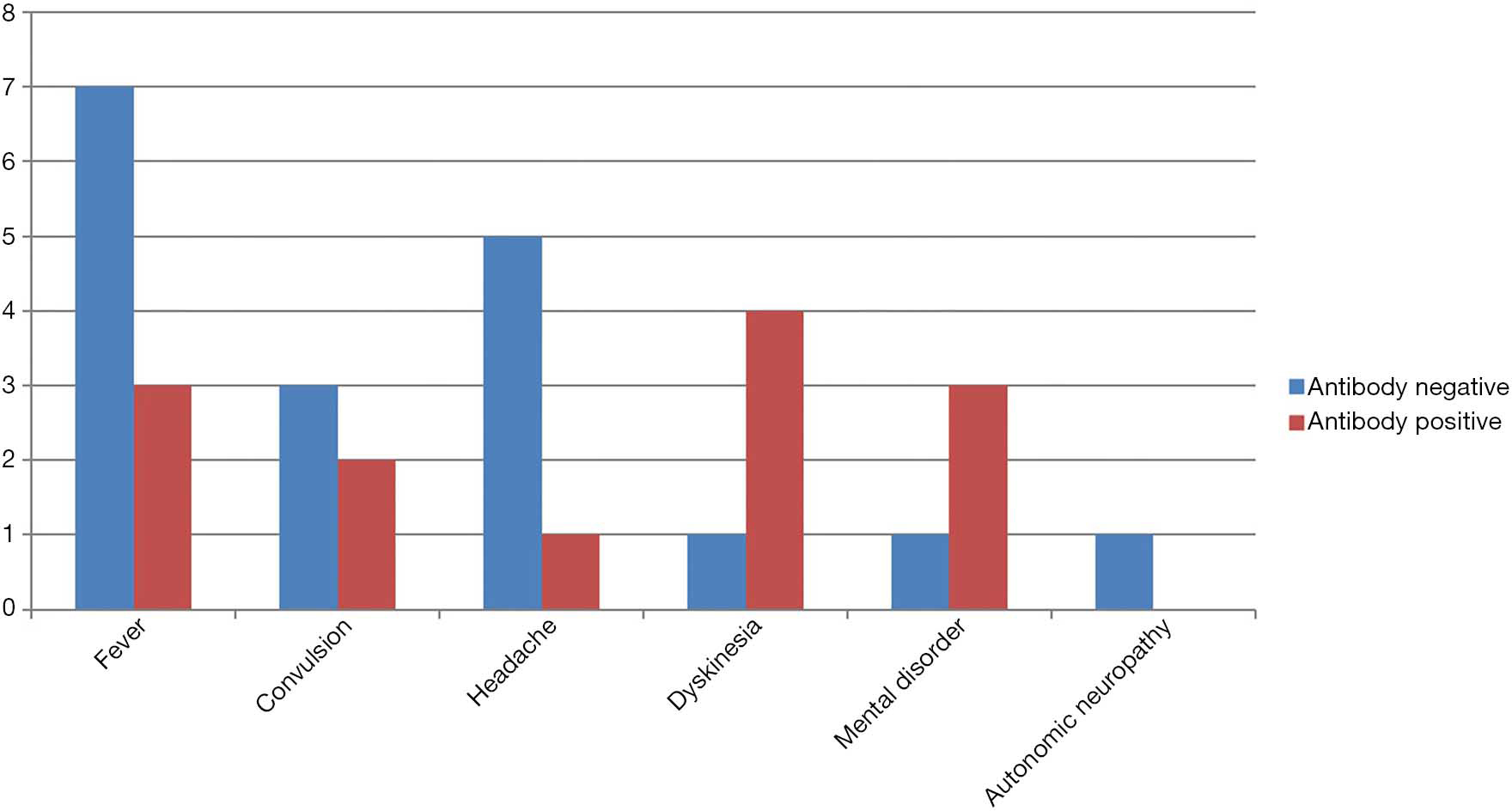 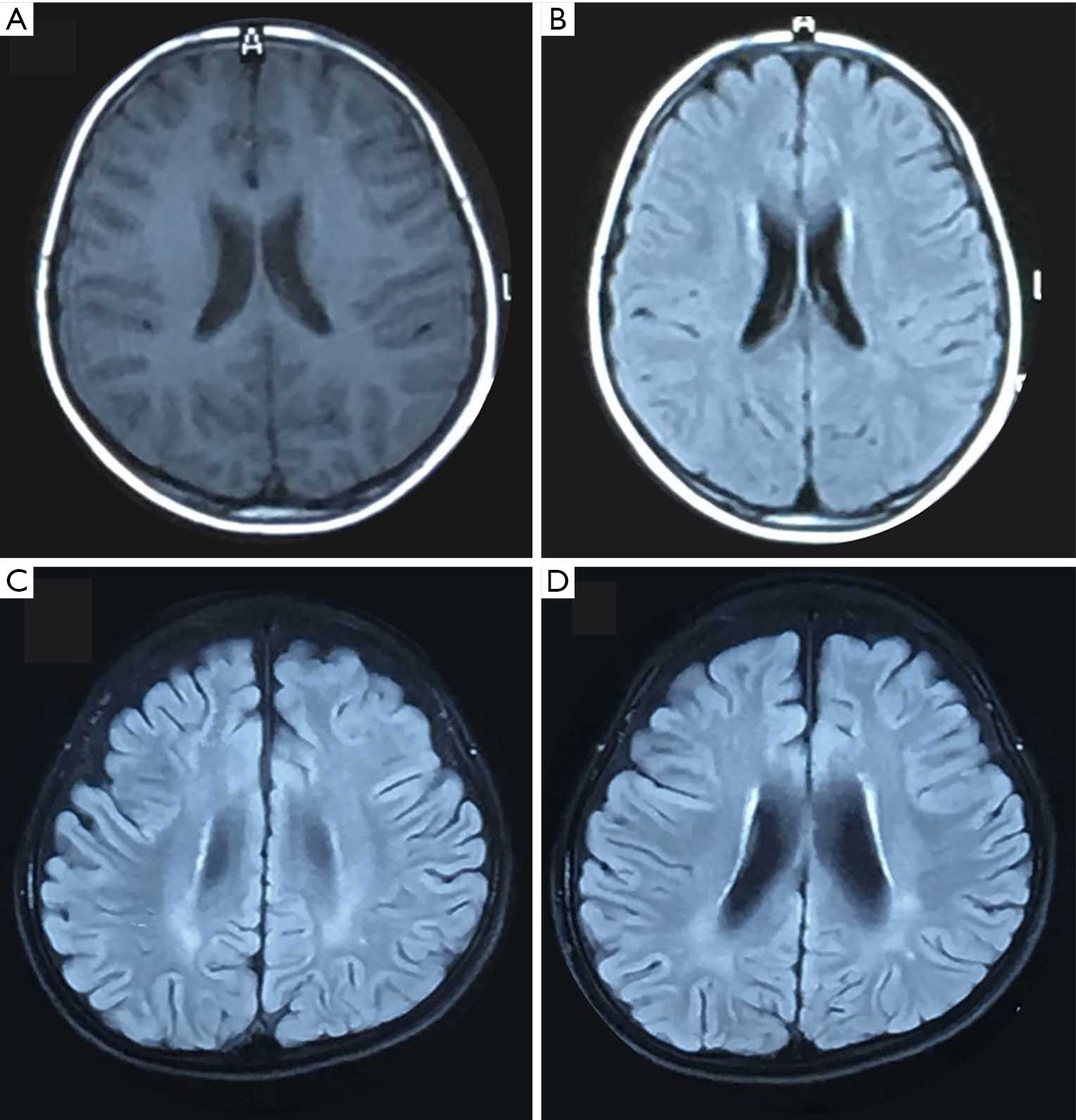 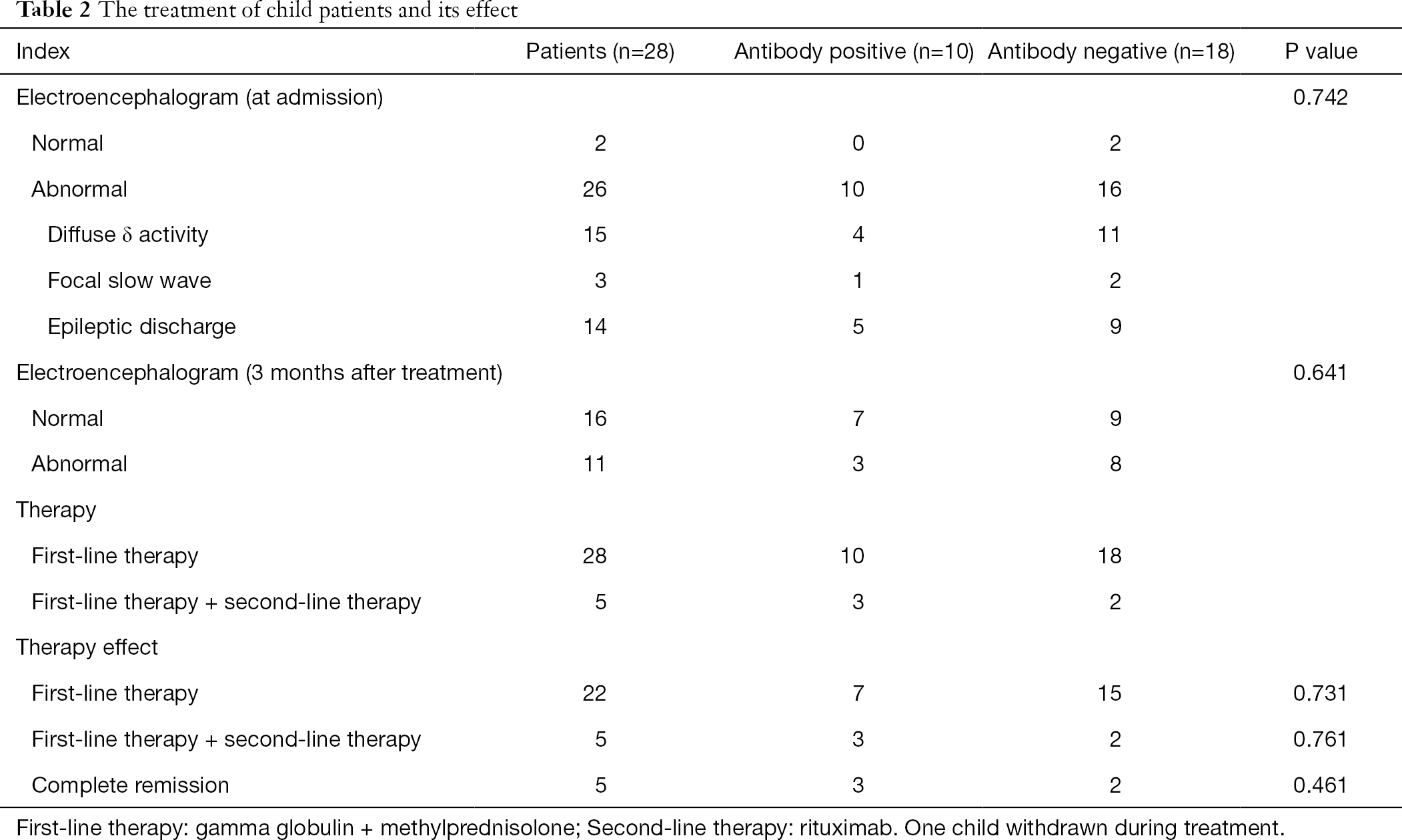 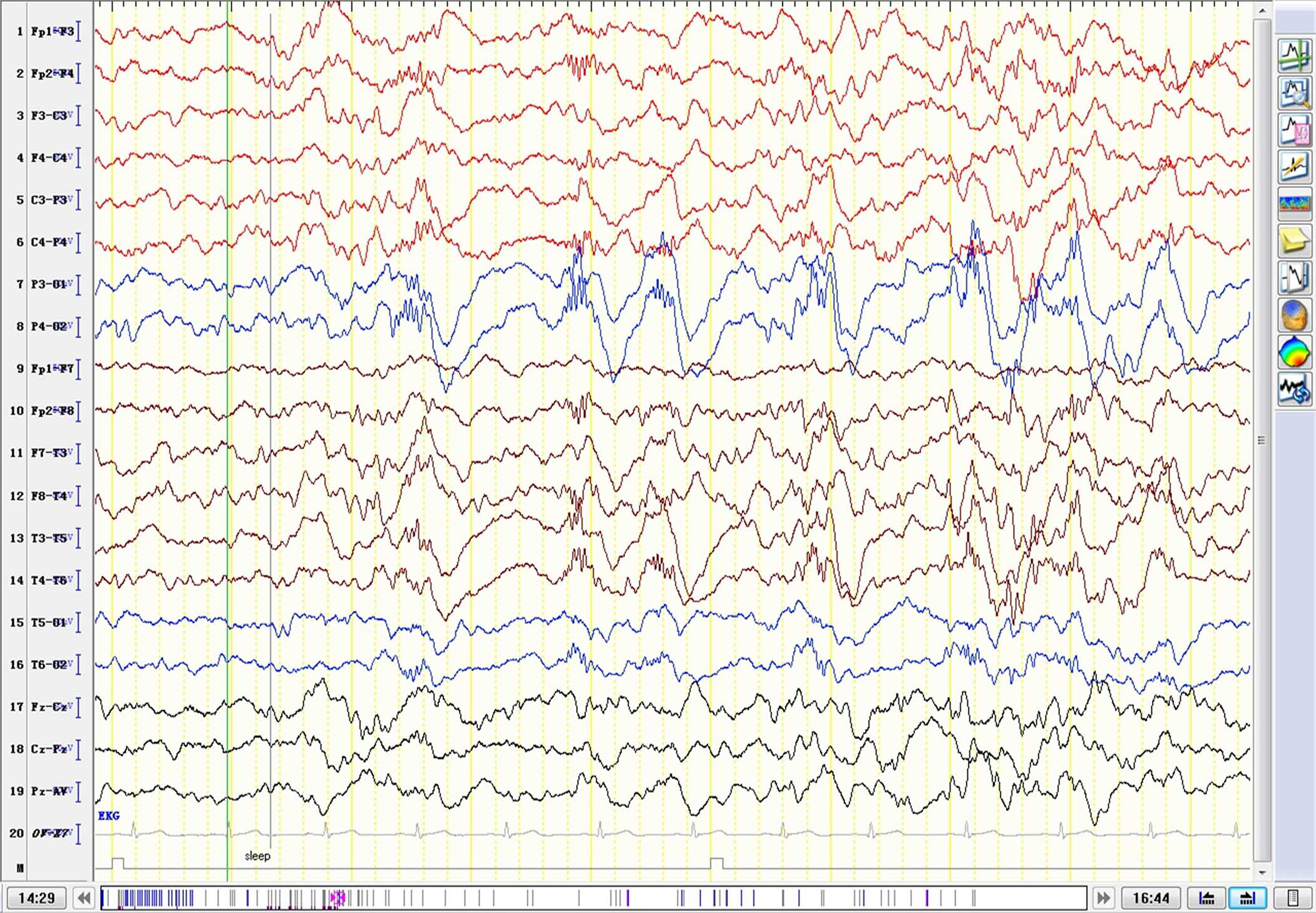 The clinical manifestations of 28 child patients in this group were classified into seven types, including mental symptoms, epileptic seizures, motor disorders, language disorders, sleep disorders, autonomic nervous dysfunction and ventilation disorders. Among these, seven clinical symptoms were found in one child patient in the antibody negative group, while merely one child had numbness and tremor in both lower limbs in the antibody positive group, and one child had fever, headache and dizziness. The treatment results of the immunotherapy were better in these two child patients with mild clinical symptoms. In the antibody negative group, two child patients with prominent mental symptoms were admitted to the Psychiatric Department at an early stage of onset, which emphasized the importance of the early identification of autoimmune encephalitis in children and differentiation from mental diseases. The difference in clinical manifestations was not statistically significant (P>0.05) between the antibody positive group and antibody negative group. Mild and moderate lymphocytes and protein increase were common in the CSF of children with autoimmune encephalitis, and oligoclonal bands could be observed in 50–60% of child patients (11-16). The CSF abnormalities in this group of child patients exhibited a slight increase in cell number, protein increase, and no specificity.

VEEG monitoring is necessary for children with autoimmune encephalitis (17). In this group, four child patients with focal status epilepticus were confirmed by VEEG. Focal seizures were detected in six child patients. Among these, 44 focal seizures were monitored in one child patient, while merely three seizures were recorded by their parents. Furthermore, two focal seizures and four local electric seizures were recorded in one child patient after three months of follow-up, but the parents did not identify the onset of the disease at the same period. The VEEG mainly revealed a diffuse δ slow wave at four hours after admission in this group of child patients, but no δ brush was recorded, which may indicate that the incidence of δ brush was lower in children with autoimmune encephalitis, or that this was correlated to the short recording time of the VEEG. In the antibody negative group, a 5-year-old and 10-month-old child patient was detected by VEEG at the 23rd month after onset (seven years and nine months old), and δ brush was monitored in the bilateral occipital, middle and posterior temporal regions. The 4hVEEG was reviewed several times after the child patient was discharged from the hospital. Focal seizures and/or focal electric seizures were discovered in the origin of the right posterior head in the early drowsiness and non-rapid eye movements (NREM) (I and II) phases. At present, these child patients can go to school, but their intellectual development slightly lags behind normal children of the same age. Schmitt et al. (18) reported that 30% of 23 adult patients with anti-NMDAR encephalitis developed an extreme δ-brushed (EDB) pattern in the early stage of continuous brain function monitoring (CEEG). These patients had a longer hospitalization time, longer CEEG monitoring time, and poorer prognosis. This suggests that the EDB pattern may be a more serious symbol. After active immunotherapy, the EEG gradually improved in at least two patients during hospitalization. Furthermore, in both patients, the regression of EDB was associated with clinical improvement (18). In addition, the study conducted by Wang et al. (19) on children with anti-NMDAR encephalitis revealed that when the δ brush appeared at the peak and trough of δ waves, this indicates a poor prognosis, while when this only occurs in a valley, this indicates a good prognosis (20).

Lancaster (17) considered that seizures in autoimmune encephalitis are correlated to the activity of the disease. Seizures may disappear after other symptoms of autoimmune encephalitis are relieved, and before the treatment of autoimmune encephalitis, seizures are difficult to control with antiepileptic drugs. After one year of follow-up, these seizures disappeared in six child patients, among the 10 children with positive antibody in this group, while one child relapsed and appeared with status epilepticus. The negative antibody was found in 17 patients. Among these patients, 10 patients stopped the use of antiepileptic drugs, and no seizures were found during the follow-up, while seven patients continued to take antiepileptic drugs (one patient suffered from seizures after stopping carbamazepine in-take). All patients had focal seizures.

In the present study, the mortality of anti-NMDA receptor encephalitis was approximately 5%. This shows that 81% of these child patients had a relatively good prognosis after follow-up for two years (12). The recurrence rate of anti-NMDAR encephalitis was not high. Approximately 12% of patients with anti-NMDAR encephalitis relapsed within two years. For autoimmune encephalitis, its recurrence is relatively mild, when compared to the first onset. Usually, merely a single epilepsy or motor disorder is recurrent. Chronic immunosuppressive measures, such as mycophenolate mofetil, azathioprine, or the re-administration of rituximab (7), can be given during relapse. This group of child patients have been followed up for more than one year. Among these patients, 23 child patients (82%) returned to normal or had a mild sequelae, one child patient (4%) suffered from mental and motor retardation (probably related to the primary disease), one child patient (4%) had secondary drug-refractory epilepsy, and three child patients (11%) relapsed. In the antibody positive group, the minimum age was eight months old, and no recurrence was found after three years of follow-up.

The exact mechanism by which nervous system autoantibodies are produced is not known. The two commonly recognized mechanism were pathogen infection and certain tumor tissues, such as herpes simplex virus infection of the central nervous system, which can collectively produce NMDAR antibodies leading to autoimmune encephalitis. Some tumor tissues contain nerve cells or express neuronal proteins, which can also induce the body to produce autoantibodies to attack the nerve or muscle system (21). NMDAR encephalitis was the most common and typical type of autoimmune encephalitis, which tends to develop in young women and children and is closely related to teratomas. However, no tumor was detected in the children with NMDAR encephalitis included in this study. Zhang et al. included 103 children with autoimmune encephalitis, and only one 12-year-old patient with NMDAR encephalitis was diagnosed with ovarian teratoma (22), indicating a low tumor detection rate in children. The pathogenesis was that NMDAR antibody IgG binds to the glutamate N1 subunit of the n-methyl-d-aspartic acid receptor on the surface of neurons, leading to the closure and internalization of NMDAR, resulting in neurological dysfunction. The titer of NMDAR antibody was closely related to the course and prognosis of encephalitis in patients. The higher the titer of antibody, the more serious the disease and the worse the prognosis of patients (23,24). Animal experiments had also confirmed that intraventricular injection of NMDAR antibody in mice leads to decreased number of synaptic NMDAR and memory loss (25). Therefore, NMDAR antibody was not only the core indicator for the diagnosis of NMDAR encephalitis, but also an important biomarker for the progression and prognosis of the disease.

The discovery of autoantibodies on the neuron surface promotes the progress in the study of encephalitis, and provides evidence for clinicians to use immunomodulatory therapy in children. However, it was found that autoantibodies could not be detected in a large proportion of children who were suspected of autoimmune encephalitis. They are similar to child patients with positive anti-NMDAR antibodies in clinical manifestation, EEG characteristics, treatment and prognosis. These child patients may have undetected/unrecognized autoantibodies or other immune mechanisms. The markers for antibody negative diagnosis still need to be further investigated. However, no enough data about the infection test in this study which should be further research in future.

Conflicts of Interest: All authors have completed the ICMJE uniform disclosure form (available at http://dx.doi.org/10.21037/apm-19-484). The authors have no conflicts of interest to declare.

Ethical Statement: The authors are accountable for all aspects of the work in ensuring that questions related to the accuracy or integrity of any part of the work are appropriately investigated and resolved. This study was conducted in accordance with the Declaration of Helsinki (as revised in 2013) and approved by the ethics committee of Qilu Hospital of Shandong University (KYLL-2020(KS)-613). All child guardian had signed the informed consent.