Heart failure is the end stage of various heart diseases which has rising morbidity and mortality continue (1,2) and the prevalence increasing with age (3-5), and it is one of the major global health problems (6). Compared with traditional medical treatment, appropriate physical activity and exercise training can improve exercise endurance, quality of life, as well as reduce medical expenses (7-12). The main type of exercise for heart failure is aerobic exercise, and suitable intensity of aerobic exercise is crucial for the effective therapy. Thus, its exercise intensity is the key element. Anaerobic threshold (AT) is directly measured by the cardiopulmonary exercise test (CPET). It has been proved safe and effective to establish aerobic exercise intensity by the AT (13).

CPET is considered the “gold standard” for assessing aerobic capacity. Peak oxygen uptake (peak VO2) and AT are frequently assessed CPET variables in chronic heart failure (CHF) (14). Unfortunately, the cost of the examination, complicated operation and difficult analysis may render the CPET unfeasible for primary hospitals.

Six-minute walking test (6MWT), as a kind of submaximal test, which is simple, low-cost and convenient to administer without the need of sophisticated equipment (15,16), objectively evaluates a patient’s functional capacity (17). Moreover, 6MWT has been proved to be suitable for prescribing exercise intensity in most people with chronic obstructive pulmonary disease (COPD), and 80% 6MWT average speed is likely to result in training benefits in some cases (18). Since it can assess cardiopulmonary function, prescribe exercise intensity, 6MWT has been used as part of assessment for CHF patients (19).

Due to great limitations of CPET, 6MWT is suitable for basic hospitals. Unfortunately, the study of the AT exercise intensity in patients with CHF has not been established with 6MWD. Therefore, this study aimed to investigate the relationship between 6MWD and AT, explore the feasibility of applying 6MWD to determine the aerobic exercise intensity that matched with AT in patients with CHF. We present the following article in accordance with the STROBE reporting checklist (available at http://dx.doi.org/10.21037/apm-20-265).

The study originated from a retrospective chart analysis of CHF and non-CHF people, who had completed CPET and 6MWT performed at the Cardiac Rehabilitation Center of Tongji Hospital in Shanghai, from June 2016 to December 2018. CHF patients meet the criteria as follows: aging from 18 to 75 years old, having heart failure symptoms and signs remaining stable for more than 2 weeks, B-type natriuretic peptide (BNP) >35 pg/mL or N-terminal pro-BNP (NT-pro BNP) >125 pg/mL, and having left ventricular systolic or diastolic dysfunction (6). Inclusion criteria of non-CHF people are as follows: aging from 18 to 75 years old, CPET and 6MWT were completed in the Heart Rehabilitation Center of Shanghai Tongji hospital, no symptoms and signs of heart failure and no abnormalities in left ventricular systolic or diastolic function. Patients with pulmonary disease, early acute coronary syndrome (within 2 days), unstable angina, uncontrolled hypertension, high atrioventricular block, acute myocarditis and pericarditis, or symptoms of aortic stenosis severe hypertrophic obstructive cardiomyopathy, acute systemic disease, intracardiac thrombosis were excluded (20). A steady staff team consisting of a well-informed sole-duty cardiologist and two experienced physiotherapists was needed in the process, where the cardiologist was responsible for diagnosis and worked with physiotherapists to conduct 6MWT and CPET safely. The study was conducted in accordance with the Declaration of Helsinki (as revised in 2013) and was approved by the Ethics Committee of Tongji Hospital Affiliated to Tongji University [LL(H)-08-04]. Informed consent was taken from all the patients. 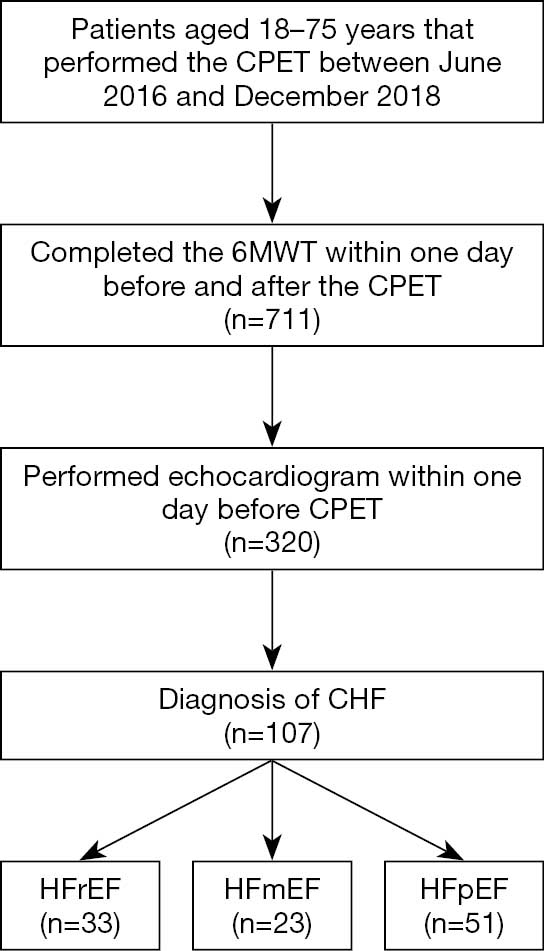 6MWD was performed according to the guidelines of the American Thoracic Society (17). The 6MWT was performed indoors, along a long, flat, and straight corridor. Patients were instructed to walk back and forth on a self-chosen walking speed. Running was not allowed. If needed, patients were allowed to slow down the pace or to stop, but were encouraged to resume walking as soon as they were able to. The hallway is 30 meters long. The length of the corridor is marked every 3 meters. The turnaround points are marked with a cone (such as an orange traffic cone). A starting line, which marks the beginning and end of each 60-meter lap, is marked on the floor using brightly colored tape. All patients were guided by a uniform standard recording during the test. According to the results, the intensity of aerobic exercise is determined. Before and after the test, were measured. The exercise intensity based on 6MWD (EI6MWD), is equal to 6MWD × 10/1,000 (km/h). For example, the 6MWD result of patient is 350 m, then the exercise intensity is 3.5 km/h.

CPET was completed at cardiac rehabilitation center. In this study we used the MasterScreen series of the lung function test system produced by CareFusion of Germany, the Cardiosoft motion test system produced by GE Medical of Germany, and the Viasprint 150 electric bicycle produced by ergoline of Germany. The revised Ramp10 program was adopted, rest on the cycle for 3 minutes, cycle for 3 minutes under no load, and then start from 0 J/second, increase 5 J every 30 seconds until the patient reaches a peak of exercise or the end of exercise. Before and after the test, blood pressure, heart rate, pulse oxygen saturation and expired gases were continuously monitored. Gas exchanged was also analyzed during exercise: each exhaled gas is continuously monitored by the pulmonary function test system after the start of the patient test. The anaerobic metabolic threshold was determined by the V-slope method (21). The aerobic exercise intensity determined by AT was EIAT, and according to the results, the metabolic equivalent value was obtained by converting the oxygen consumption amount of one metabolic equivalent (1 MET =3.5 mL/kg/min), EIAT = (METs@AT-1) × 3.5 × 60/100 (km/h) (22). 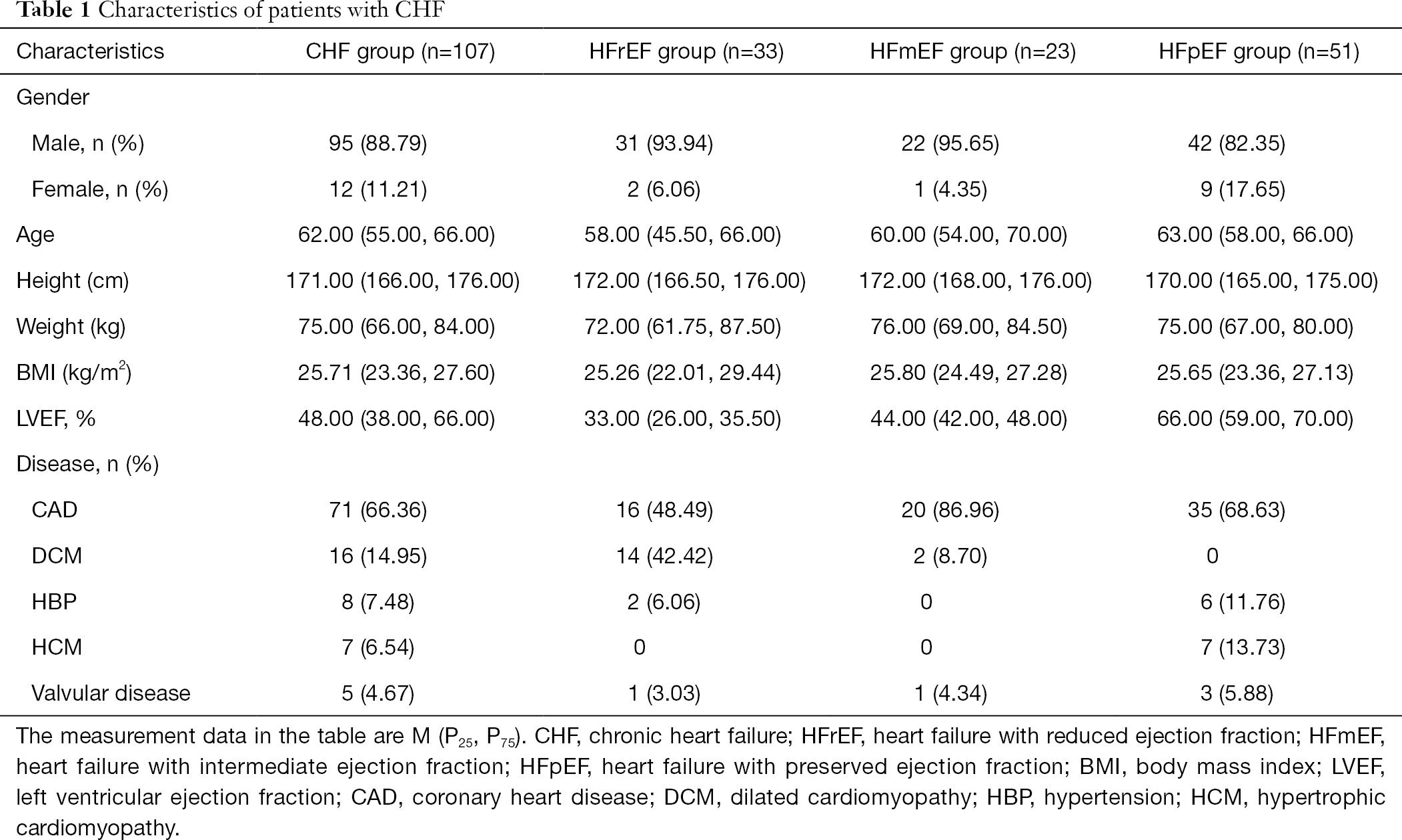 The correlations between the VO2AT, peak VO2, load AT and load peak in group HFrEF were significantly lower than those in group HFpEF (P<0.05), whereas there were no significant differences in 6MWD and VE/VCO2 slope in CHF sub-groups (P>0.05) (Table 2).

Correlation between 6MWD and AT

Correlation between EI6MWD and EIAT 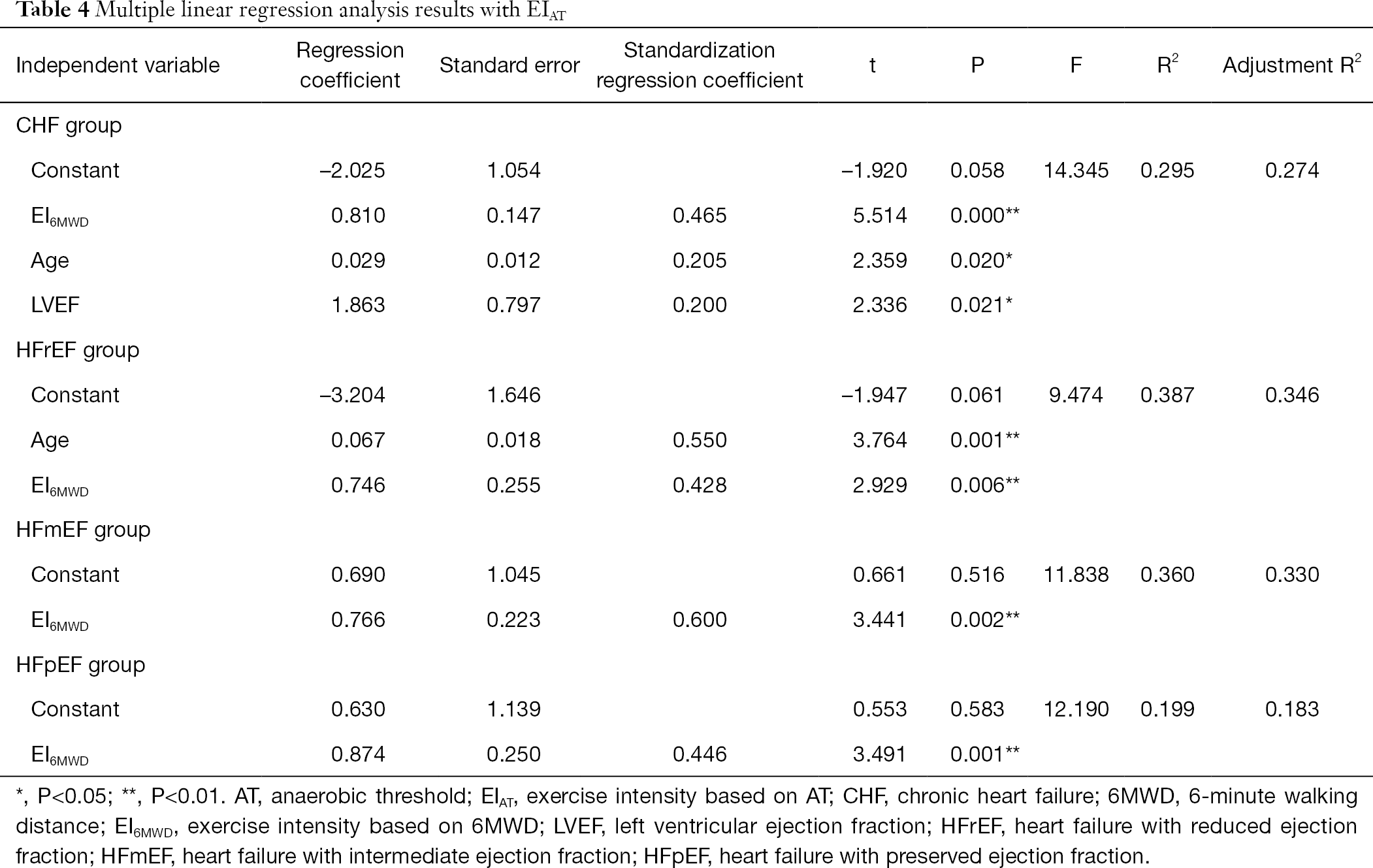 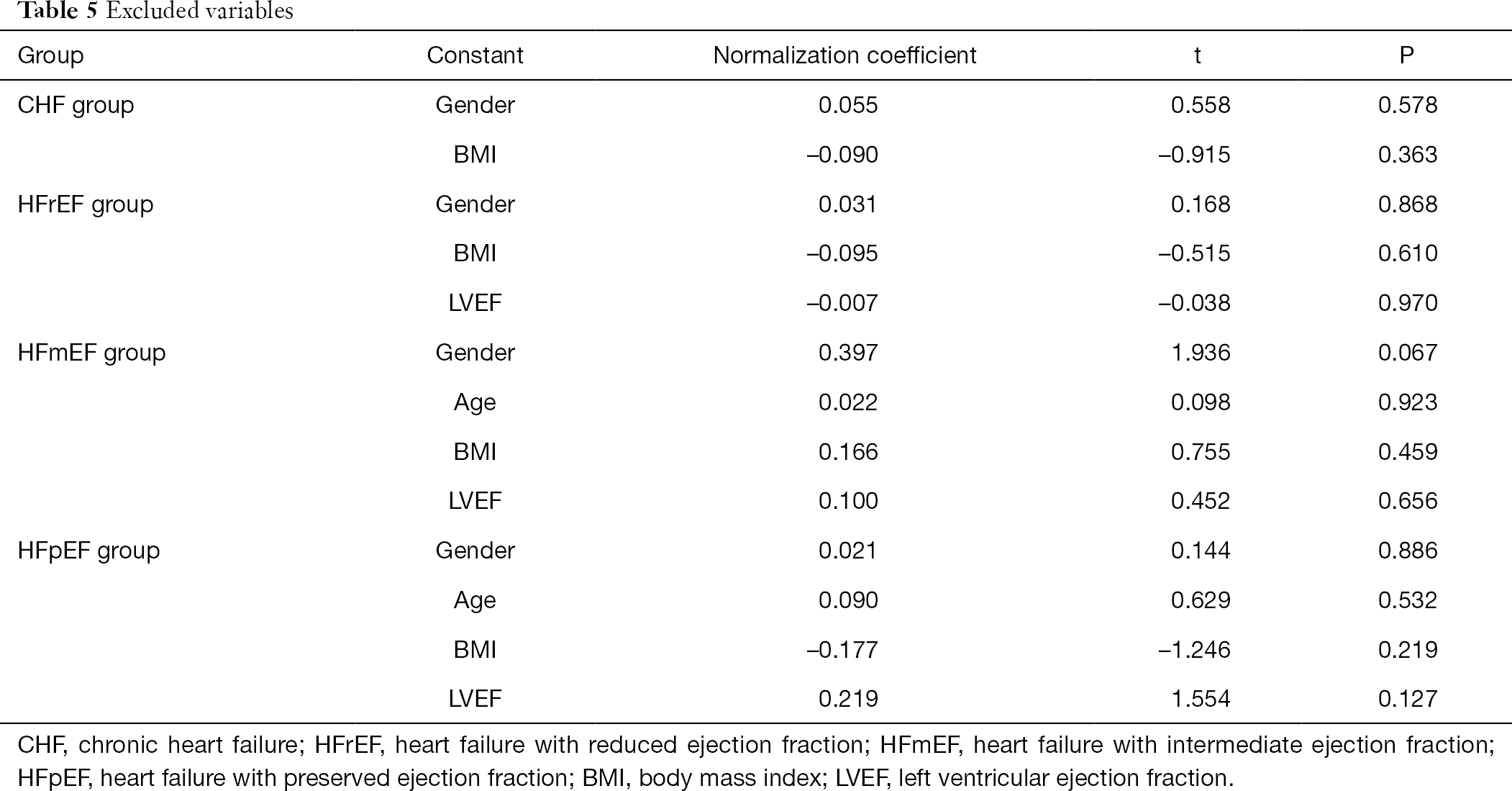 The U-test was utilized to compare the standardized regression coefficients of EI6MWD and EIAT (Table 6). The results showed that the correlation coefficient between the heart failure groups and the non-heart failure group was statistically different (P=0.033), and the CHF sub-groups were not statistically different (P>0.05). There is a moderate positive correlation between 6MWD and AT in patients with CHF.

Previous studies were able to show the relationship between 6MWD and peak VO2. According to the Robert M. Ross studies, there was an equation: peak VO2 (mL/kg/min) = 4.948 + 0.023 × 6MWD (meters) (23). Furthermore, the study of Adedoyin RA showed an equation might be useful when sophisticated equipment is lacking: peak VO2 = 0.0105 × 6MWD (meters) + 0.0238 × age (yr) – 0.03085 × weight (kg) + 5.598 (24). In addition, previous study that suggest the use of the 6MWT to evaluate exercise capacity in patients with heart failure is highly dependent on the degree of functional impairment (25). Individuals who peak VO2 >25.2 mL/kg/min, 6MWT VO2 was significantly lower compared with CPET peak VO2, whereas individuals who peak VO2 ≤17.5 mL/kg/min showed significantly higher 6MWT VO2 compared with CPET peak VO2. However, the correlation between aerobic exercise intensity of 6MWT and CPET has not been explored. In this study, we discussed the relationship between EI6MWD and EIAT, detected by 6MWT and CPET respectively, and obtained the specific equation between them as follows.

The results of this study showed that 6MWD and AT were significantly correlated in patients with CHF. There was no significant difference of case number, age composition, and sex ratio among CHF sub-groups (P>0.05) (Table 2). The AT and peak VO2 of HFrEF patients were lower than those of HFpEF patients (P<0.05). The exercise tolerance of HFrEF patients was worse than HFpEF patients. However, there was no significant difference in VE/VCO2 slope among sub-groups (P>0.05), indicating that there was no significant difference in ventilation efficiency among the sub-groups. The single factor linear regression analysis showed that there were different degrees of positive correlations between 6MWD and AT in the CHF group and each CHF sub-group respectively. Further linear regression analysis showed that the EIAT of CHF group and each CHF sub-group were positively correlated with EI6MWD, and the regression equation was obtained: (I) CHF group: EIAT = 0.810 × EI6MWD + 0.029 × age + 1.863 × LVEF; (II) HFrEF group: EIAT = 0.746 × EI6MWD + 0.067 × age; (III) HFmEF group: EIAT = 0.766 × EI6MWD; (IV) HFpEF group: EIAT = 0.874 × EI6MWD. The previous equation showed that there was a positive correlation between EI6MWD and EIAT, and the linear equation model developed can predict EIAT by EI6MWD, the aerobic exercise intensity based on AT and 6MWD respectively, of CHF patients. In other words, it is feasible to establish the aerobic exercise intensity of patients with CHF equivalent to AT based on 6MWD, the distance of 6-minute walk test.

The present study has some limitations that should be addressed. On the basis of strict inclusion criteria and exclusion criteria, the sample size was small. However, these findings are preliminary and must be evaluated in a larger patient population. Thus, our team will carry out further research to make the test results more convincing later. Furthermore, VO2 of the blood system can be influenced, such as hemoglobin, can lead to a decrease in VO2 (27), and creatinine can affect blood hydrogen ion and carbon dioxide partial pressure (28). Therefore, these two indicators need to be considered in the follow-up study.

In conclusion, we demonstrate that there is a correlation between EI6MWD and EIAT. 74.6–87.4% of EI6MWD in patients with CHF is equivalent to EIAT. Therefore, it is feasible to use 6MWT as a suitable technique for the rehabilitation of patients with CHF in primary hospitals. However, these findings should be further confirmed in a larger population.

Funding: This study was supported by the National Natural Science Foundations (No. 81974359 and No. 81700316) and the Advanced Proper Technology Promotion Project of Municipal Health and Health Commission in Shanghai, China (No. 2019SY014).

Reporting Checklist: The authors have completed the STROBE reporting checklist. Available at http://dx.doi.org/10.21037/apm-20-265

Conflicts of Interest: All authors have completed the ICMJE uniform disclosure form (available at http://dx.doi.org/10.21037/apm-20-265). The authors have no conflicts of interest to declare.

Ethical Statement: The authors are accountable for all aspects of the work in ensuring that questions related to the accuracy or integrity of any part of the work are appropriately investigated and resolved. The study was conducted in accordance with the Declaration of Helsinki (as revised in 2013) and was approved by the Ethics Committee of Tongji Hospital Affiliated to Tongji University [LL(H)-08-04]. Informed consent was taken from all the patients.