Effects of dexmedetomidine on heart rate control and pre-operative outcome in patients with acute aortic dissection: a propensity-matched analysis

Acute Aortic dissection (AAD) is a life-threatening condition and intensive control of heart rate and blood pressure are vital to prevent the occurrence of aortic dissection rupture (1,2). In recent years, the total mortality of aortic dissection has declined significantly along with advances of surgical technique (3). However, the incidence of pre-operative aortic dissection rupture remains high, as much as 36–72% patients would die within 48 hours after the onset of AAD, and slow progress in drug treatment for heart rate control is one of the leading causes (4,5). To date, the methods of heart rate control for AAD are mainly depending on large dosage of negative inotropic β-receptor blocker, which could simultaneously lead to serious complications including acute heart failure and pulmonary edema, particularly for the patients with preexisting heart dysfunction (6). Therefore, exploring new methods to control heart rate effectively accompanied with less complication is of great significance in reducing pre-operative aortic dissection rupture.

Dexmedetomidine (DEX) is a selective alpha-2 adrenergic receptor agonist that exhibits sedative, analgesic, anxiolytic, and sympatholytic effects with minimal respiratory-drive depression (7). Despite bradycardia is a common adverse effect of DEX, that’s exactly what AAD patients need, for whose heart rate should be controlled as slowly as possible under the premise of guaranteeing organ perfusion (8). During our clinical practice, we found that the heart rate in patients who received DEX infusion were under better control. To the best of our knowledge, there is no relevant study to address the use of DEX in ADD patients. Therefore, our study was conducted to describe the effects of DEX on heart rate control and pre-operative outcome among AAD patients.

We present the following article in accordance with the STROBE reporting checklist (available at http://dx.doi.org/10.21037/apm-20-363).

This was a single center, retrospective and observational study. Patients who were admitted for AAD between January 2016 and June 2019 were identified as cases. This study was conducted in accordance with the Declaration of Helsinki (as revised in 2013) and was approved by ethics commissions of the First Hospital of Lanzhou University (No. GDREC2018162H), with a waiver of written informed consent. Exclusion criteria: aortic dissection rupture and pulmonary edema at the day of admission, bradycardia with heart rate <55 bpm, hypotension with systolic blood pressure (SBP) <90 mmHg, undergoing surgical treatment within two days after admission.

After hospital admission, DEX was administered at the discretion of the physician caring for the patient. Patients were divided into DEX group who received intravenous administration of DEX and Control group who did not receive DEX during hospitalization. Both groups accepted standard treatment according to Guidelines on the diagnosis and treatment of aortic diseases (8), including ECG monitoring, absolute bed rest, analgesia. Diltiazem, urapidil, nicardipine and sodium nitroprusside were used to control blood pressure and the target SBP is 100–120 mmHg or lower; Esmolol was applied for heart rate control and the target heart rate is 60–70 bpm or lower. In DEX group, based on the standard treatment, intravenous administration of DEX was started in the emergency department within 1 h of hospitalization with loading injection of 1 µg/kg, followed by continuous infusion of 0.1–0.7 µg/(kg·h) >2 days.

During the 7-day observation, the incidence of aortic dissection rupture and pre-operative survival rates within 7 days were considered as the primary clinical outcomes of this study. Aortic dissection rupture was defined as a sudden sharp decline in heart rate and blood pressure leading to respiratory and cardiac arrest, and bedside ultrasound suggested new pleural and peritoneal effusion.

Data are the mean ± standard deviation, percentages, or medians (interquartile range). Continuously variables were expressed as mean± standard deviation, categorical variables were expressed as number and percentage. The unpaired t-test or Mann-Whitney test was used for unpaired comparisons as appropriate. The Fisher’s exact or chi-square test was used to examine differences between categorical variables. The cumulative incidence of death was estimated according to the Kaplan-Meier method, and the log-rank statistic was used for comparisons.

After the data were initially analyzed, we performed a propensity-matched analysis to minimize selection bias. Based on a multivariate logistic regression model, each patient was assigned a propensity score. Covariates in the model included age, sex, comorbidities, APACHE II score, LVEF, NT-pro-BNP, classification of aortic dissection (Stanford), heart rate and SBP at baseline (Table 1). Patients in the DEX and Control groups were matched by 2-digit in a 1:1 ratio, based on the estimated propensity score for treatment with intravenous DEX. P<0.05 was considered significant. All statistical data were analysed by licensed IBM SPSS Statistics version 24.0 for Windows (SPSS Inc, Chicago, IL, USA). 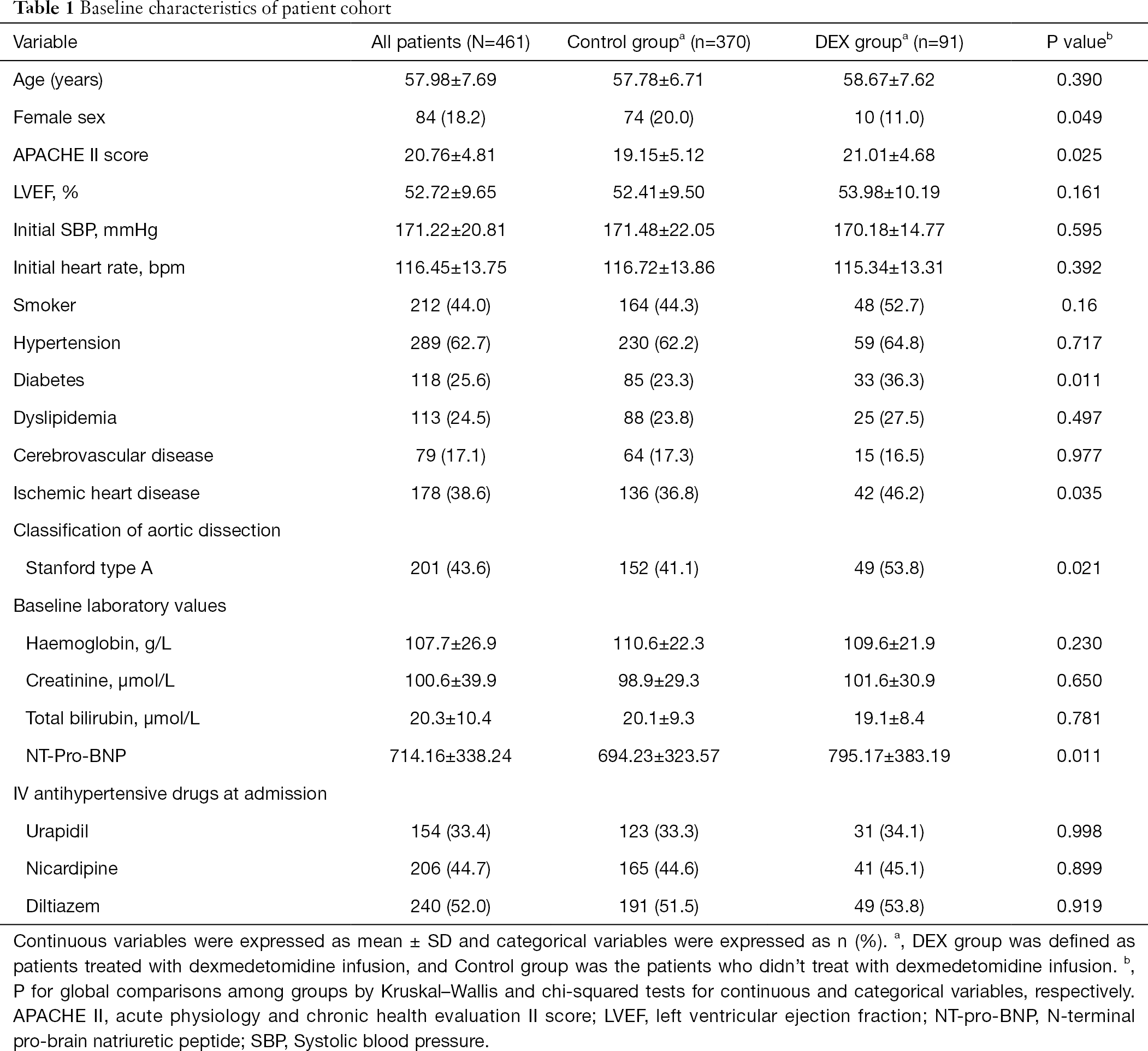 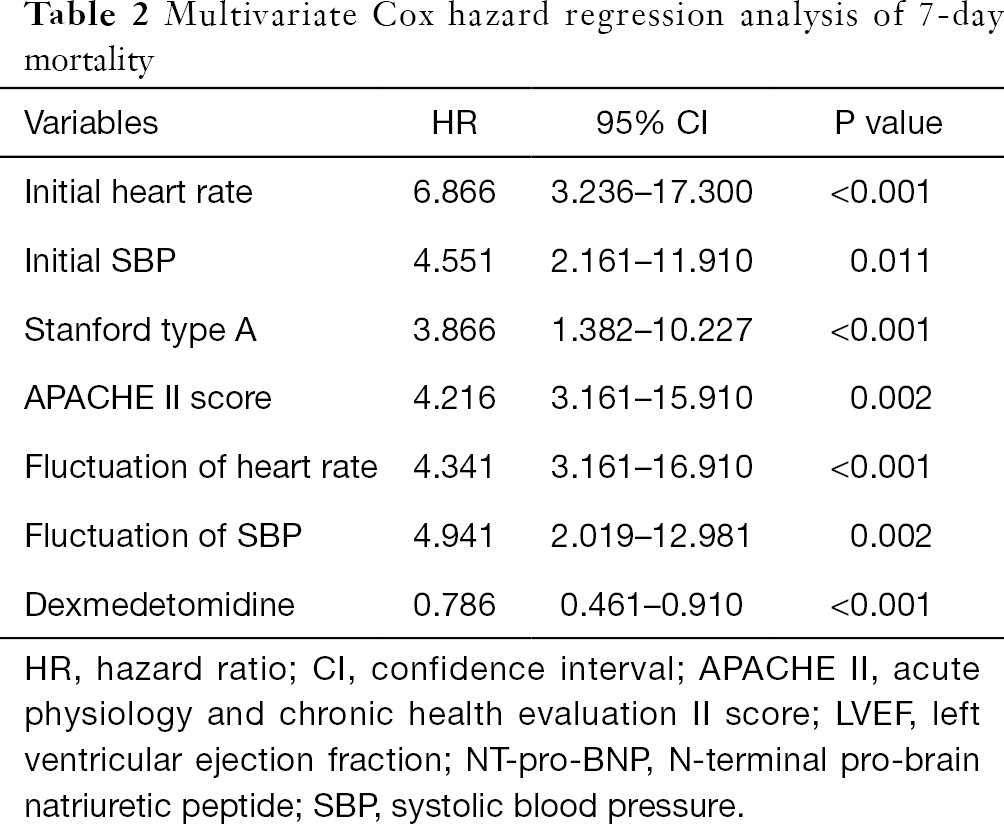 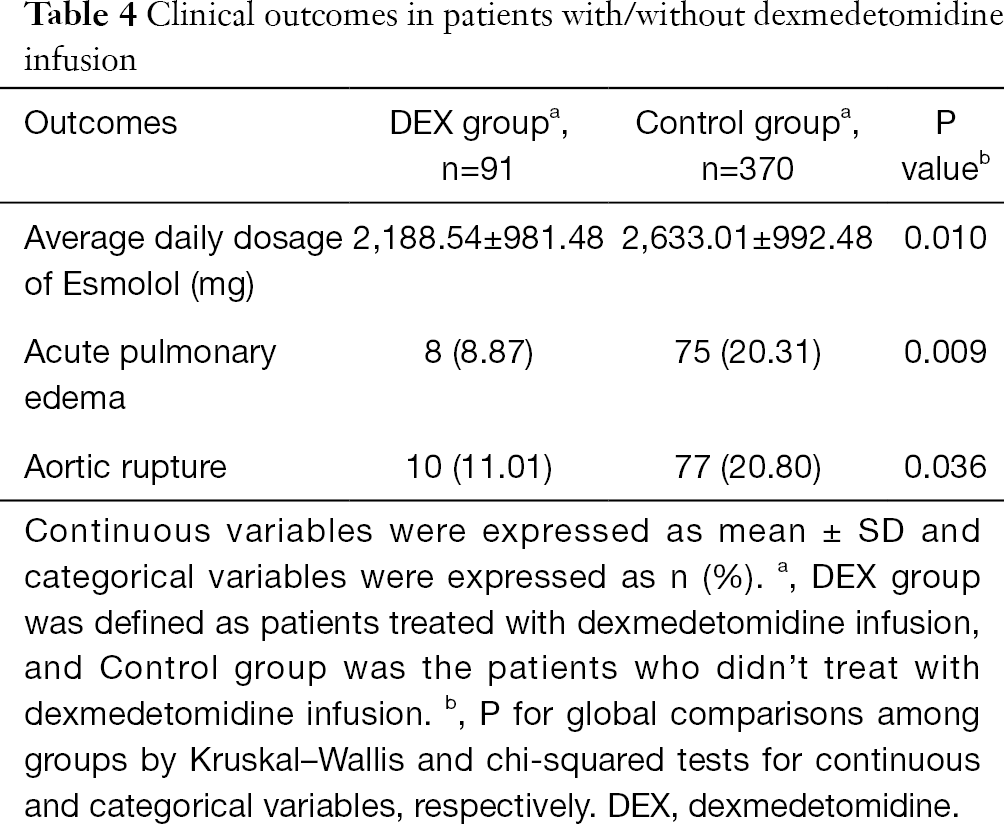 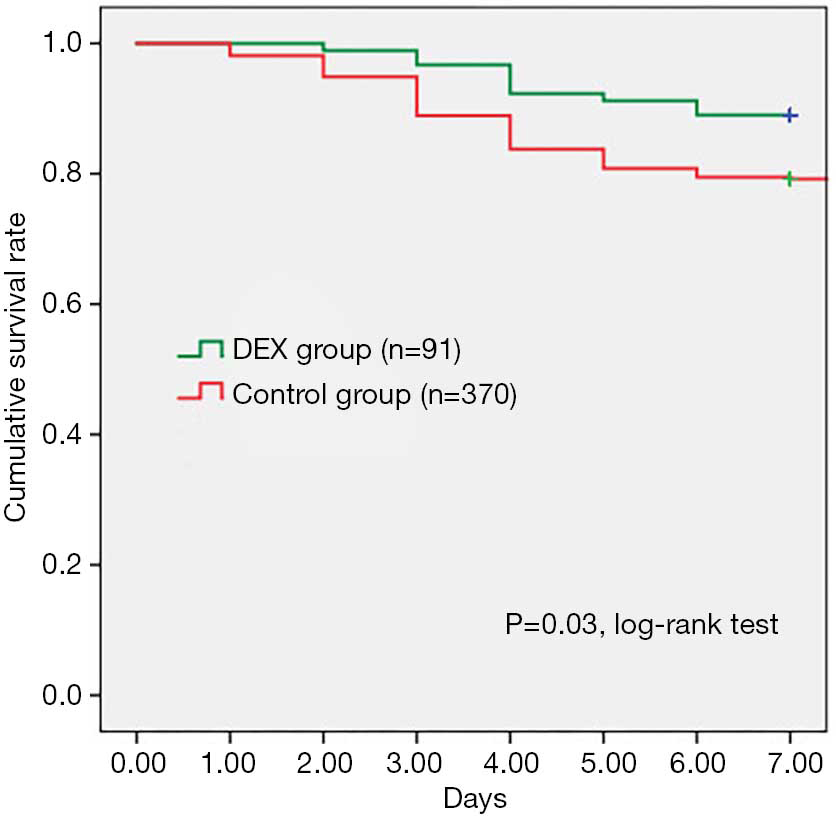 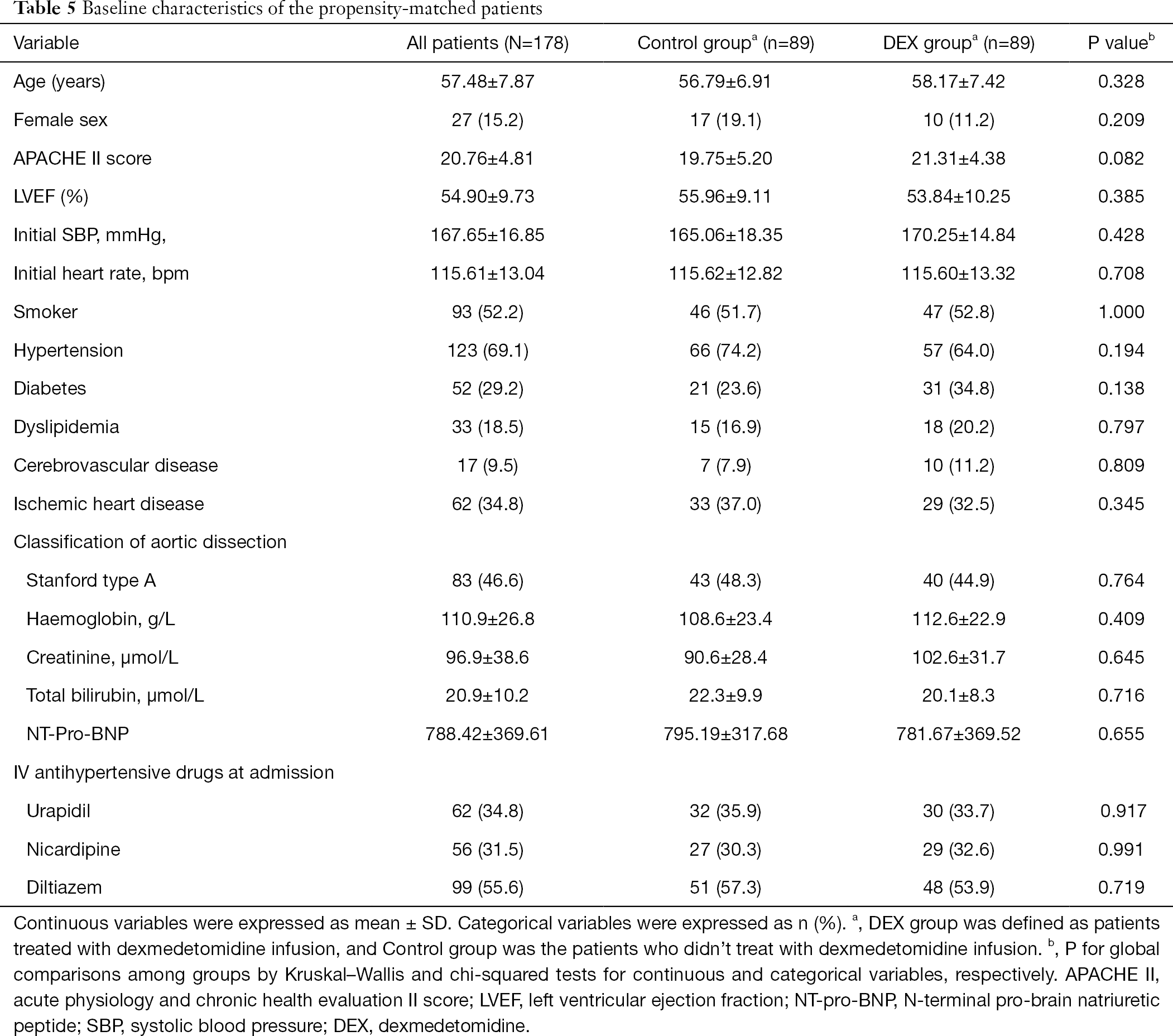 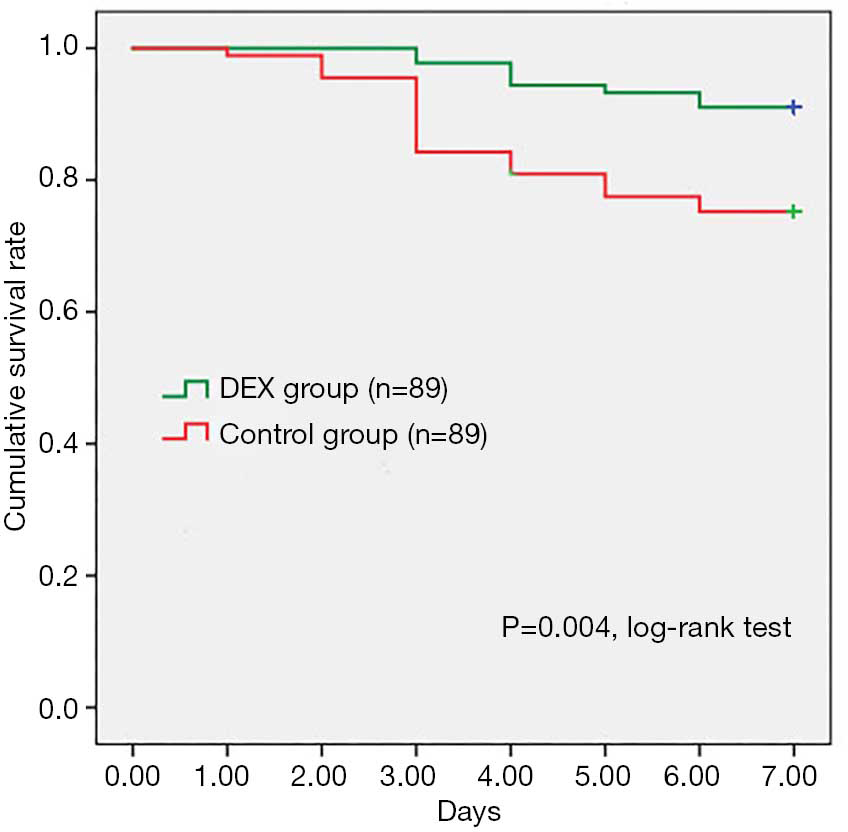 In recent years, the total survival rate in patients with AAD has prominently improved, which indicates that more and more patients have benefited from advances in surgical approaches (6,9,10). Unfortunately, the mortality rate of pre-operation is still high, which is mainly attributed to unsatisfied control of heart rate (3). In this study, the efficacy of DEX in reducing heart rate and BP was evaluated. We retrospectively analyzed data and found that DEX could facilitate more efficient and rapid heart rate control, and improve the survival rate of pre-operation in patients with AAD.

Before surgery, controlling heart rate and BP steady is the key to prevent the rupture of aortic dissection (8,11). As shown in our study, initial value of heart rate/SBP and fluctuation of heart rate/SBP both were significant predictive factors for the occurrence of 7-day death. However, compared with SBP, it is much more difficult to control heart rate (12). Until now, clinician still have a preference for using large amount of beta-antagonists to control the heart rate of AAD patients (8,13). In fact, beta-antagonists alone cannot rapidly reduce the heart rate of a considerable part of AAD patients to expected value, meanwhile, their negative inotropic effects could exacerbate symptoms in heart dysfunction patients and even induce acute heart failure (14). Therefore, finding a new solution to control heart rate is urgently needed.

The onset of aortic dissection would induce a series of inflammatory and stress responses (15). DEX is a highly selective alpha-2 adrenergic agonist which could effectively inhibit the production of stress-related catecholamine (16). Previous clinical use of DEX as a sedative agent also showed its side effect in reducing heart rate (17,18). The role of DEX in lowering catecholamine level and reducing heart rate seems to provide us with a new treatment idea. But almost no investigation has focused on the use of DEX as an adjunctive therapy for AAD patients.

In our study, patients who received regular regimens and an additional DEX therapy started to decrease heart rate 1 h later, while non-DEX patients began to decrease heart rate prominently 3 h later. In the meantime, the early control rates of heart rate in DEX group were significantly higher than Control group in the first 3 h (53.22% vs. 30.34%, P=0.009). Furthermore, the degree of heart rate slowdown was significantly greater in the DEX group than non-DEX group at 6, 12 and 24 h after admission. This indicated that the combination of DEX and beta-receptor antagonist could provide faster heart rate control.

The data also showed that patients in both groups met the predefined SBP easily and had high early control rates of SBP, which was similar to previous clinical research (19). Meanwhile, the SBP could be well controlled during the first 3 h and there was no significant difference between two groups (81.34% vs. 80.28%). Although the SBP could be well controlled during the whole observation period and there was no difference in the control rate of SBP between the two groups, after reaching the ideal SBP, the 24 h fluctuation range of SBP in the DEX group was smaller (21.26±7.34 vs. 31.81±8.77 mmHg, P=0.003). Therefore, DEX could facilitate more efficient and rapid heart rate control, and keep BP more stable.

Some investigations have reported that AAD can induce an urgent complication—acute pulmonary edema, which is considered as the combinational results of severe inflammatory responses, overused beta-antagonist, and preexisting heart disease (20,21). Our study figured out that the incidence rate of acute pulmonary edema in DEX group was significantly lower than Control group (8.79% vs. 20.31%, P=0.009), and less daily dosage of Esmolol (2,188.54±981.48 vs. 2,633.01±992.48 mg, P=0.001) in DEX group seems to be a positive factor. In the meantime, the occurrence rate of aortic rupture in DEX group was 11.01%, which reduced significantly in comparison with Control group (20.80%) (P=0.036). Our Kaplan-Meier analysis indicated that pre-operative survival rates within 7 days were significantly higher in patients in the DEX group than the Control group (P=0.03). Furthermore, estimated propensity scores were used to eliminate selection bias, we concluded that patients with additional DEX treatment had higher early control rates of heart rate, smaller 24 h fluctuation range of heart rate and SBP, lower incidence rates of acute pulmonary edema and aortic dissection rupture, higher pre-operative survival rates.

In conclusion, these results regarding protective efficacy of DEX against AAD patients were validated. DEX could trigger faster and more efficient heart rate control, reduce the total amount of beta-antagonist usage, decrease the incidence of complications, keep BP in a more stable status, and increase pre-operative survival rate, which is consistent with its function in anti-sympathetic activation, anti-inflammatory responses and bradycardia.

Even though our study is not a prospective trail, we still provide new thinking for clinicians. There are, however, limitations mainly inherent to the single-center retrospective study design with limited sample size and another well designed double-blind, multi-center trial is waiting to be conducted.

The authors are grateful to Deng Yi-Yu for illustration design. We also thank Clinical Trial Center of Guangdong Provincial People’s Hospital for statistical consultation and support.

Reporting Checklist: The authors have completed the STROBE reporting checklist. Available at http://dx.doi.org/10.21037/apm-20-363

Conflicts of Interest: All authors have completed the ICMJE uniform disclosure form (available at http://dx.doi.org/10.21037/apm-20-363). The authors have no conflicts of interest to declare.

Ethical Statement: The authors are accountable for all aspects of the work in ensuring that questions related to the accuracy or integrity of any part of the work are appropriately investigated and resolved. This study was conducted in accordance with the Declaration of Helsinki (as revised in 2013) and was approved by the Ethics Committee of the Guangdong Provincial People’s Hospital (No. GDREC2018162H) and individual consent for this retrospective analysis was waived.