Adult-onset Still’s disease (AOSD) is a rare multisystem auto-inflammatory disorder, characterized with high-spiking fever, arthritis/arthralgia, rash, leukocytosis with neutrophilia, elevated ferritin levels (1). Researchers have made huge efforts to reveal that infection may play a role in the disorder, however the exact etiopathogenesis is still unknown (2-6). The Yamaguchi criteria are widely used in diagnosing AOSD and experimental study (7). However, it is still a clinical challenge to make a diagnosis of AOSD as it is an exclusive diagnosis (8,9).

Fever of unknown origin (FUO) are multi-causes, difficult to diagnose and time-consuming clinical diseases defined as fever (>38.3 °C) lasting more than 3 weeks and remaining undiagnosed after standardized history-taking, physical examination, and certain obligatory investigations (1,10-14). Patients with hematological disease, receiving chemotherapy, glucocorticoids and other autoimmune diseases were excluded. Pizzo et al. reported that the duration of hospitalization for FUO can lengthen 19 days (15). About 15–20% of patients evaluated for FUO had the diagnosis of AOSD (16). In clinical practice, malignancy-associated FUO, infection-associated FUO and non-infection associated FUO are most common (14). Such a heterogeneous composite often requires a thorough diagnostic work-up. There is still no effective differential diagnosis method. Therefore, for patients with FUO, we hypothesize a simple clinical diagnostic model to help clinicians to differentiate patients with AOSD from other FUO causes, to effectively save existing medical resources, relieve pain and reduce the economic burden on patients.

We present the following article in accordance with the STROBE reporting checklist (available at http://dx.doi.org/10.21037/apm-20-268).

This is an observational case-control study. Patients (≥16 years) initially diagnosed with AOSD and met Yamaguchi criteria (7) between January 2010 and December 2018 in our hospital were recruited (AOSD Group). Patients admitted to the same center diagnosed with other FUO and met the standard criteria (1,14) [patients (≥16 years) who had a body temperature >38.3 °C for at least 3 weeks without an established cause of fever after 1 week of hospitalization] during the same time were also recruited (FUO group). Patients with hematological disease, receiving chemotherapy, glucocorticoids, other autoimmune diseases and incomplete information and data were excluded. We also reviewed 81 healthy controls, who visited our hospital for medical check-ups during the same time.

Blood samples were taken when admission and measured within 2 hours [blood routine indexes were analyzed using a Sysmex XE 2100 analyzers (Sysmex, Japan), ferritin analysis was performed on Unicel DXI 800 (Beckman Coulter, America)], data of three groups were collected respectively. This study was approved by the Ethics Committee of The First Affiliated Hospital of Nanjing Medical University (Nanjing, China) (2019-SR-072) and in accordance with the Declaration of Helsinki (as revised in 2013). We obtained patients’ written consents prior to data collection.

Assessment of the patients

Admission data (initial diagnosis and before the initiation of any treatment) (results of the first blood draw) such as clinical parameters, including age, gender, fever or not, typical skin rash, arthritis/arthralgia, sore throat, myalgia, lymphadenopathy, hepatomegaly, splenomegaly and laboratory parameters, including procalcitonin, C-reactive protein (CRP), ferritin, leukocyte, lymphocyte, neutrophil, lymphocyte proportions, neutrophil proportions, red blood cell distribution width (RDW), platelet, platelet parameters of all patients were obtained and recorded. There were insufficient data to test the strength of glycosylated ferritin and IL-18 in the FUO and AOSD groups.

All statistical analysis was performed on the Statistical Package for the Social Sciences software (version 21; IBM Corporation, Armonk, NY, USA).

Kolmogorov-Smirnov analysis was used to test the distribution form of all variables. The data of descriptive analysis were expressed as either mean ± standard deviation (SD) (normally distributed) or the median, interquartile range (non-normally distributed). The chi-square test or Fisher’s exact test were used to compare categorical variables where appropriate. The non-normally and normally distributed continuous data between two groups were compared with Mann-Whitney U test and Student t test respectively. For the multivariate analysis, the variables identified with univariate analyses were further entered into the logistic regression analysis to determine independent predictors of patient outcome. After the clinical feasibility assessment of possible parameters derived from multivariate analysis, we developed a model. P<0.05 was used to infer statistical significance.

Demographic, clinical, and laboratory features of the study subjects

The clinical characteristics of AOSD group and FUO group are shown in Table 1, Fever was found in almost all patients in both groups (98.9% vs. 100%). Arthralgia/arthritis could be seen in 60 of 91 patients (65.9%) and 25 of 89 patients (28.1%) in the AOSD and FUO groups, respectively. Typical skin rash was present in 39 of 91 patients (42.9%) and 13 of 89 patients (14.6%) in AOSD group and FUO groups, respectively. There was no statistically significant difference in lymphadenopathy between the two groups. In addition to above, sore throat, myalgia, hepatomegaly and splenomegaly could occur in both groups.

The demographic and laboratory parameters were also compared among the three groups showing in Table 2. Thirty-two (35.2%) patients were male in AOSD group, 33 (37.1%) patients were male in FUO group and 41 (50.6%) were male in control group. Median ages of patients were similar [32 (range, 16–74) years for AOSD group, 36 (range, 16–73) for FUO group and 36 (range, 22–76) for control group]. There were no significant differences in age and gender (P=0.866, P=0.085). CRP and ferritin differed significantly between AOSD and FUO groups. Leukocyte, lymphocyte, neutrophil, lymphocyte proportions, neutrophil proportions, plateletcrit (PCT), mean platelet volume (MPV) and platelet distribution width (PDW) were significantly different among the three groups. However, there were also no significant differences in procalcitonin, RDW, platelet among the three groups (Table 2). 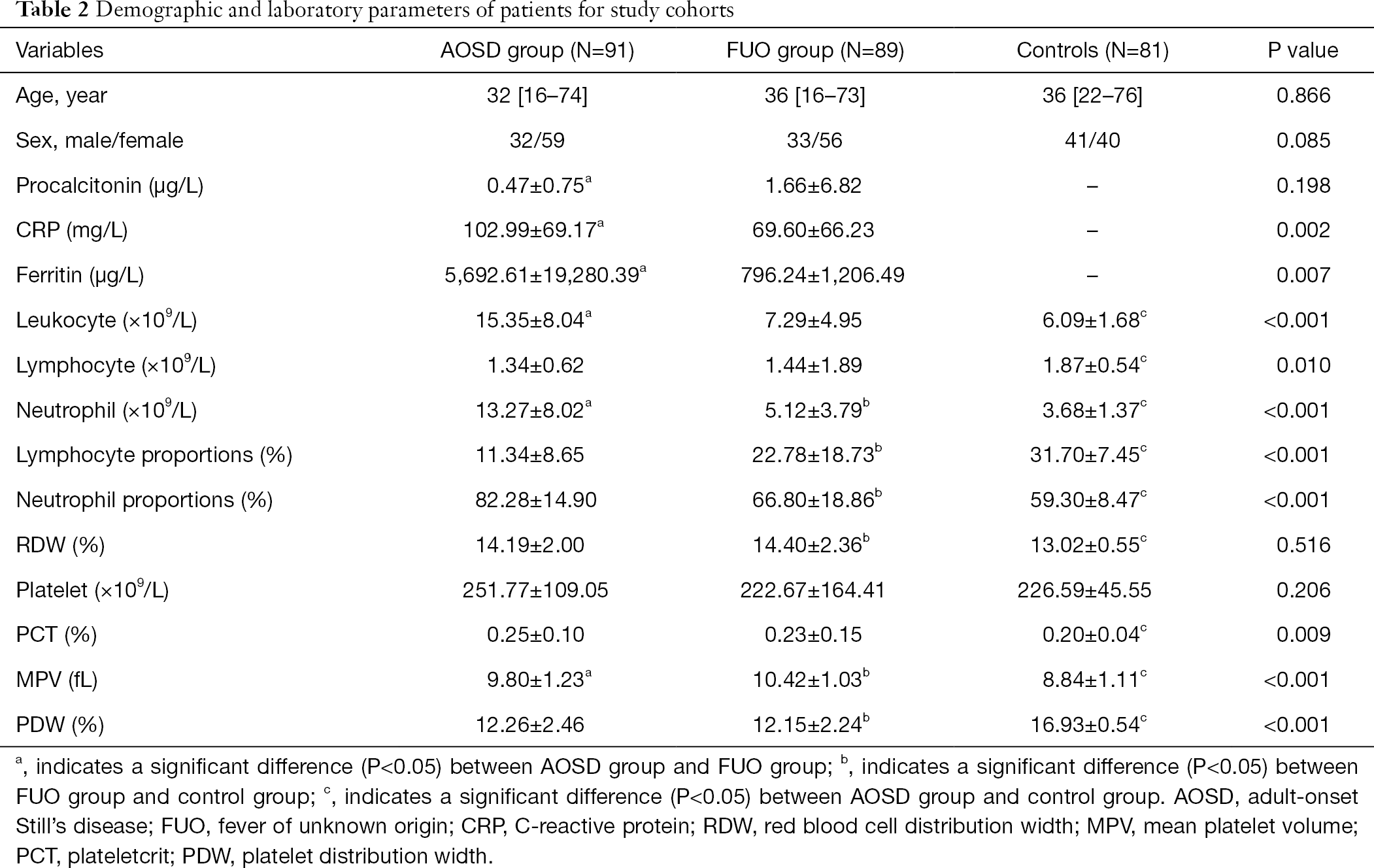 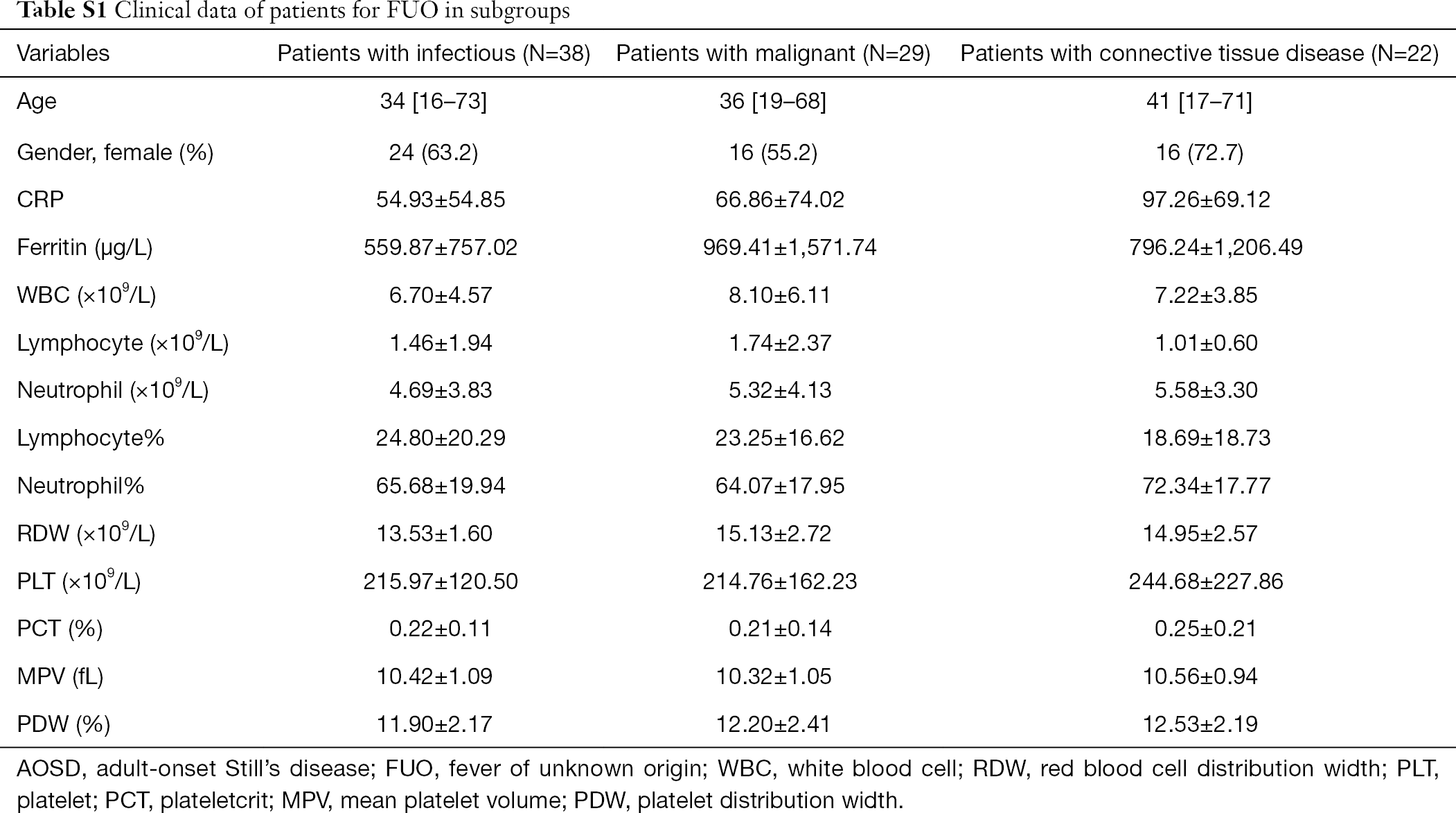 After the identification of possible factors for predicting AOSD by univariate analysis, we performed a binary logistic regression analysis to determine independent predictors of AOSD. Details of univariate and multivariate analyses are given in Table 3. After univariate screening, variables which were executed in the model including CRP, ferritin, leukocyte, neutrophil, neutrophil proportions, lymphocyte proportions and MPV, in which the variables ferritin, neutrophil and MPV were significantly different (P<0.001, P<0.001, P=0.016; respectively). The higher ferritin, neutrophil and the lower value of MPV in the model indicated the higher probability to diagnose AOSD. Table 3 also showed the regression coefficients and risk score for each variable. The equation for the model is as follows: Logit P=2.304 × ferritin + 2.696 × neutrophil − 1.260 × MPV − 5.108.

Area under the curve and diagnostic cutoff value

It is well known that the area under the curve ranged from 0.5 to 1.0. When the AUC <0.7 indicated that the diagnostic accuracy was low; AUC ranging between 0.7 and 0.9 has a high accuracy; and AUC >0.9 indicated that the diagnostic accuracy was greatly enhanced. As presented in Figure 1, AUC of the model was 0.909 (95% CI: 0.855–0.947), suggesting that the model had a good differential diagnostic efficiency. Youden’s index (sensitivity + specificity −1) was used to determine the best value for sensitivity and specificity (Table 4). In the model, when the cutoff point is higher than 0.468, the sensitivity and specificity for diagnosis of AOSD were 86.6% and 82.0%, respectively. In contrast, when the cutoff point was <0.468, other FUO was diagnosed. 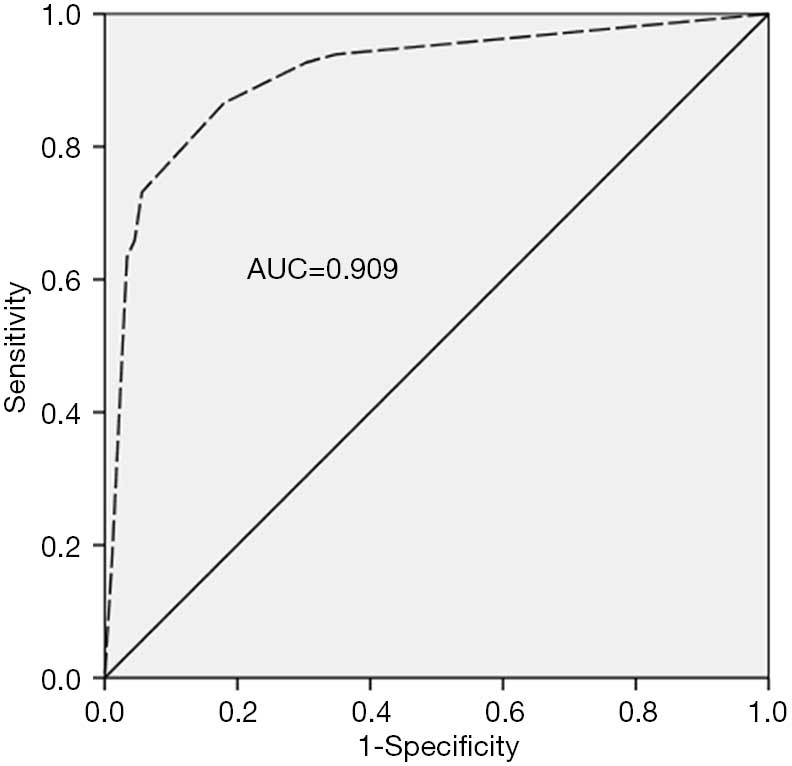 Figure 1 Characteristic feature of the curve for model (P<0.001). 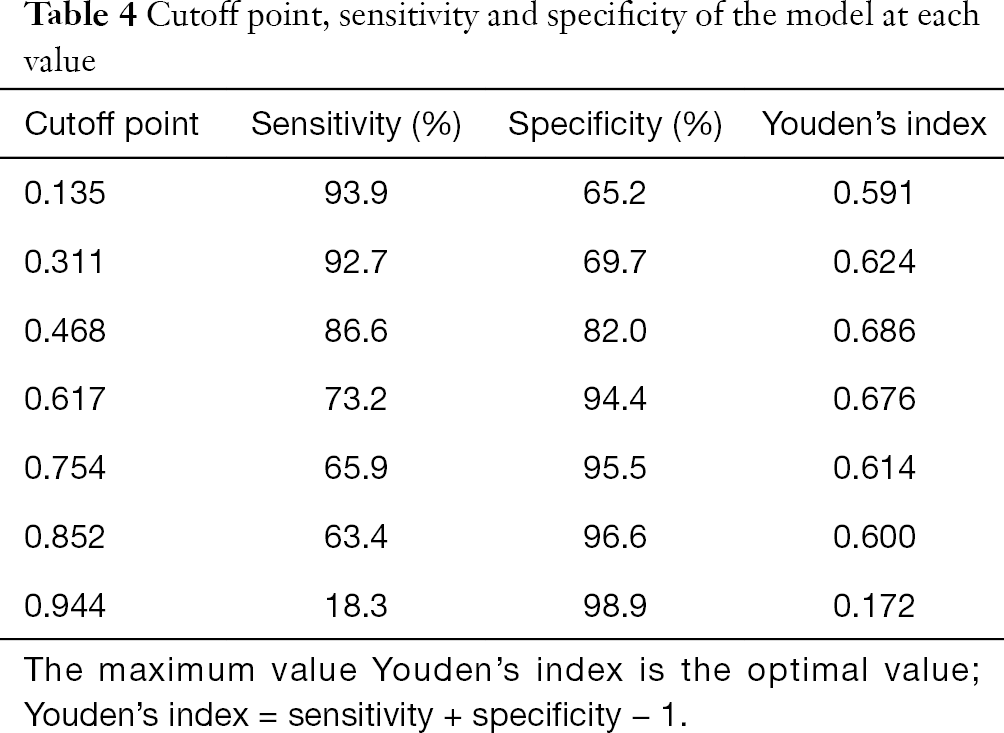 Table 4 Cutoff point, sensitivity and specificity of the model at each value
Full table

In this study, we quantified the contribution of laboratory features rather than clinical features to detect patients who have the high likelihood of being diagnosed with AOSD as clinical features are either being ignored or with low specificity. After screening, ferritin, neutrophil and MPV were selected into the model. The larger value of ferritin and neutrophil, the smaller value of MPV in the model indicated the higher potential of AOSD.

Fever is the major clinical manifestation of AOSD and other FUO (14,17). Several epidemiological studies revealed that the AOSD was one of the most common rheumatologic-associated causes of FUO (18,19). Evaluation of patients with FUO is exhausting, time-consuming, and expensive (20). At present, clinicians distinguish them mainly based on clinical characteristics, laboratory features and personal experience. Generally, ferritin, glycosylated ferritin, IL-18, CRP, Leukocyte, neutrophil, lymphocyte and RDW are mainly used to diagnose AOSD (21). However, these markers can also increase in other FUO patients, and there is no clearly defined range and clinicians can only judge based on clinical experience. In addition, the measurement of glycosylated ferritin and IL-18 is not clinically feasible as they are not available for many centers despite of their accuracy. It is still difficult to make differential diagnosis of AOSD and other FUO. Without properly and effectively guided clinical treatment, patients might accept the wrong treatment plan or delayed treatment, leading to serious adverse consequences. Therefore, making differentiation of these two clinical entities with a clinical diagnosis model is invaluable.

Ferritin is correlated with severe hyperinflammation in ICU-patients (22). To newborns with hypoxic-ischemic brain injury, neutrophil could be used as an inflammation-sensitive marker (23). MPV is measured with the automatic analyzer, standing for the average platelet size. An escalated MPV is serving as the destruction and consumption of platelets (24). In this study, compared with FUO group, increased number of platelets and lower PDW were revealed in the AOSD group, this would indicate a relationship between AOSD and platelet activation.

The model has a high diagnostic value for the identification of AOSD and other FUO with high sensitivity (86.6%), specificity (82.0%) and AUC [0.909 (95% CI: 0.855–0.947)], helping clinicians make diagnosis based on readily available clinical data, when the patient’s etiological analysis is not clear or clinical features are not obvious. We recommended 0.468 as the cutoff value for diagnosing AOSD and other FUO. If the AUC is greater than cutoff point, AOSD should be diagnosed. Conversely, if the AUC is lower than the cutoff point, other FUO should be diagnosed. The model can be used widely as the included markers can be performed even in most of local hospitals.

However, there are also some shortcomings in our model. For example, due to the limited sample size, we have not yet verified the results for large sample sizes. Future studies will further optimize and verify the model. Another limitation of our study is the fact that we could not include all the potential biological markers that can differentiate AOSD from other FUO because of methodological and financial reasons (25).

In conclusion, in the present study, clinical indexes including ferritin, neutrophil and MPV were used to establish a clinical diagnostic model, which can be quantitative assistance for the diagnosis of AOSD and other FUO. Therefore, it helps clinicians differentiate AOSD and other FUO, making it easier and timelier to provide patients with optimal treatments.

Reporting Checklist: The authors have completed the STROBE reporting checklist. Available at http://dx.doi.org/10.21037/apm-20-268

Conflicts of Interest: All authors have completed the ICMJE uniform disclosure form (available at http://dx.doi.org/10.21037/apm-20-268). The authors have no conflicts of interest to declare.

Ethical Statement: The authors are accountable for all aspects of the work in ensuring that questions related to the accuracy or integrity of any part of the work are appropriately investigated and resolved. This study was approved by the Ethics Committee of The First Affiliated Hospital of Nanjing Medical University (Nanjing, China) (2019-SR-072) and in accordance with the Declaration of Helsinki (as revised in 2013). We obtained patients’ written consents prior to data collection.