Skin is the first barrier between the human body and the external environment, and is a vital component of the immune system. It senses external stimuli, regulates body temperature and excretion of bodily fluids, prevents physical and chemical damage, and blocks the invasion of pathogenic microorganisms (1-3). Unfortunately, acute and chronic injuries, deep degree burns, diabetic foot ulcers, and pressure sores can result in skin defects and even exposure of tendons and blood vessels (4-6).

Vacuum sealing drainage (VSD) has been extensively applied in wound repair (7,8). VSD accelerates wound repair via several mechanisms: (I) increase in local blood flow and improvement of blood microcirculation of the wound (9); (II) improvement of edema around the wound and decrease in vascular permeability (10); (III) prevention of bacterial growth and wound infection (11); (IV) creation of a sealed and moist healing environment, and acceleration of the growth of granulation tissue (12); and (V) stimulation of cell proliferation and differentiation (13). However, the sustained negative pressure created by VSD on exposed vascular wounds can result in blood vessel compression, embolism, or necrosis. It is therefore vital to expand the indications of VSD by protecting exposed vessels and accelerating wound repair. At present, the application of VSD on exposed vascular wounds, especially in soft tissue defects of lower limbs combined with vascular wounds, is not frequently attempted.

We present the following article in accordance with the ARRIVE reporting checklist (available at http://dx.doi.org/10.21037/apm-20-625).

The Kunming mice were randomly assigned to an experimental group and a control group. They were intraperitoneally administered either 50 mL/kg of material extract (experimental group) or normal saline (control group). They were housed in separated cages after administration. General condition, body mass, signs of toxicity, and number of deaths were assessed at 24, 48, and 72 h following administration.

New Zealand rabbits were anesthetized by administration of 3% pentobarbital in the ear vein based on their body weight. After inguinal hairs were shaved and sterilized, a wound model with an exposed femoral artery was prepared (the wound size was 3 cm × 4 cm), followed by compression hemostasis. Intramuscular injection of 800,000 units of penicillin was postoperatively performed for 2 consecutive days to prevent wound infection.

A total of 30 New Zealand rabbits with exposed vascular wound model were randomly classified into three groups: the control group, VSD-only group, and combined shield-VSD group (with 10 rabbits in each group). The control group received routine dressing change treatment, and the wound surface was washed with normal saline every day. After disinfection with povidone iodine, the wound was covered with sterile gauze dressing, and the fixed dressing was covered with biofilm. For the VSD-only group, wounds were covered with a VSD dressing of the corresponding size, and the wound edge was sutured around the dressing. After wiping the edge of the wound with alcohol, it was completely covered with biofilm. A suction cup was subsequently installed and connected to a negative pressure suction device. Negative pressure was adjusted to −150 mmHg and maintained for 7 days. For the combined shield-VSD group, the exposed femoral artery was first covered with a 2-cm long vascular protective shield, and then operated according to the same procedure as the VSD-only group.

Determination of systolic and diastolic capacities of myocardium

On post-injury day 7, the skin of the neck was cut to bluntly dissect muscles and expose the carotid artery. The catheter of the biological function experiment system was inserted into the left ventricle to examine the hemodynamics.

Rabbit skin wound tissue was collected at post-injury day 7 and fixed in 4% paraformaldehyde for 3–5 days at room temperature. After dehydration and paraffin embedding, sections were cut at 4 µm and stained with HE for histological examination.

Marginal tissues of rabbit skin wound were collected at post-injury day 7 and prepared to yield 4 µm sections as above. After antigen retrieval, sections were incubated with primary and secondary antibodies, stained with 4',6-diamidino-2-phenylindole (DAPI) and coverslipped. CD31 staining was observed under a fluorescence microscope. 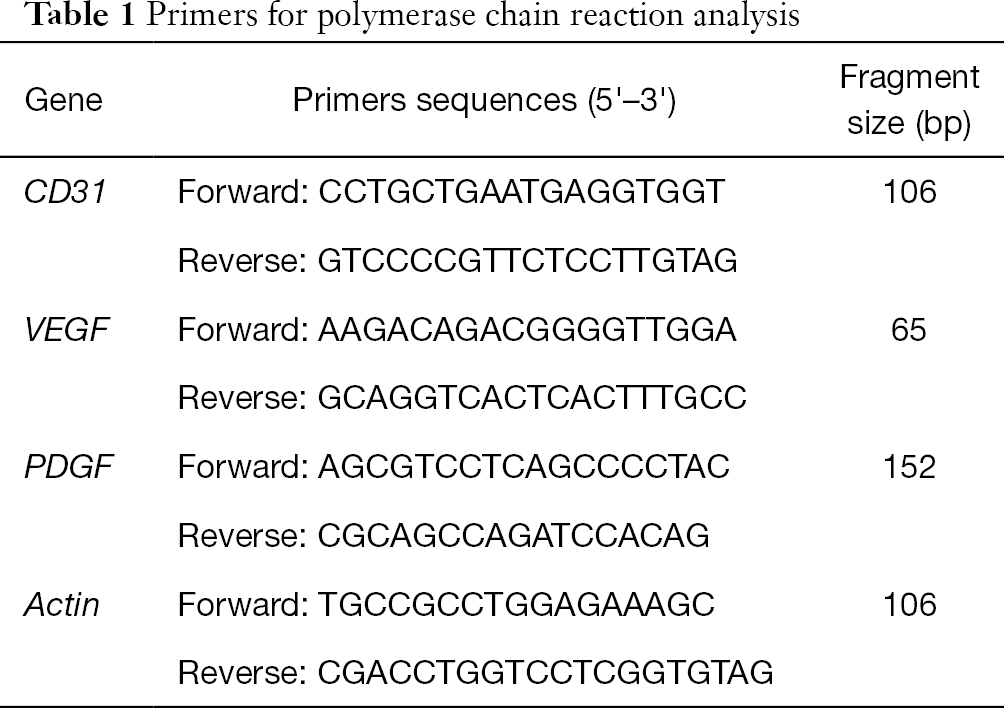 Total protein was extracted from marginal tissues of rabbit skin wound using RIPA, quantified by the BCA method, and subsequently loaded for electrophoresis. After transferring onto a polyvinylidene fluoride (PVDF) membrane, protein was blocked in 5% skim milk for 2 h, incubated with primary antibodies at 4 °C overnight and secondary antibodies for 2 h. Bands were exposed by enhanced chemiluminescence (ECL) and analyzed by Image-Pro Plus.

The degree of compression of exposed vessels on post-injury day 7 was assessed by observing pathological conditions of stenosis, deformity, and embolism.

Each experiment was repeated in triplicate. SPSS 20.0 was used for data analyses. Data are expressed as mean ± standard deviation and analyzed by the Student’s t-test. A P value <0.05 was considered statistically significant.

The vascular protective shields with semicircular profiles were prepared (Figure 1A). Electron microscopy findings of the semi-circular tubular hose showed that the internal structure of the material was smooth, dense, and evenly distributed. The material fit the vessel wall well. The longitudinal section showed a longitudinal layered structure, and the transverse section showed a more intense structure (Figure 1B,C). 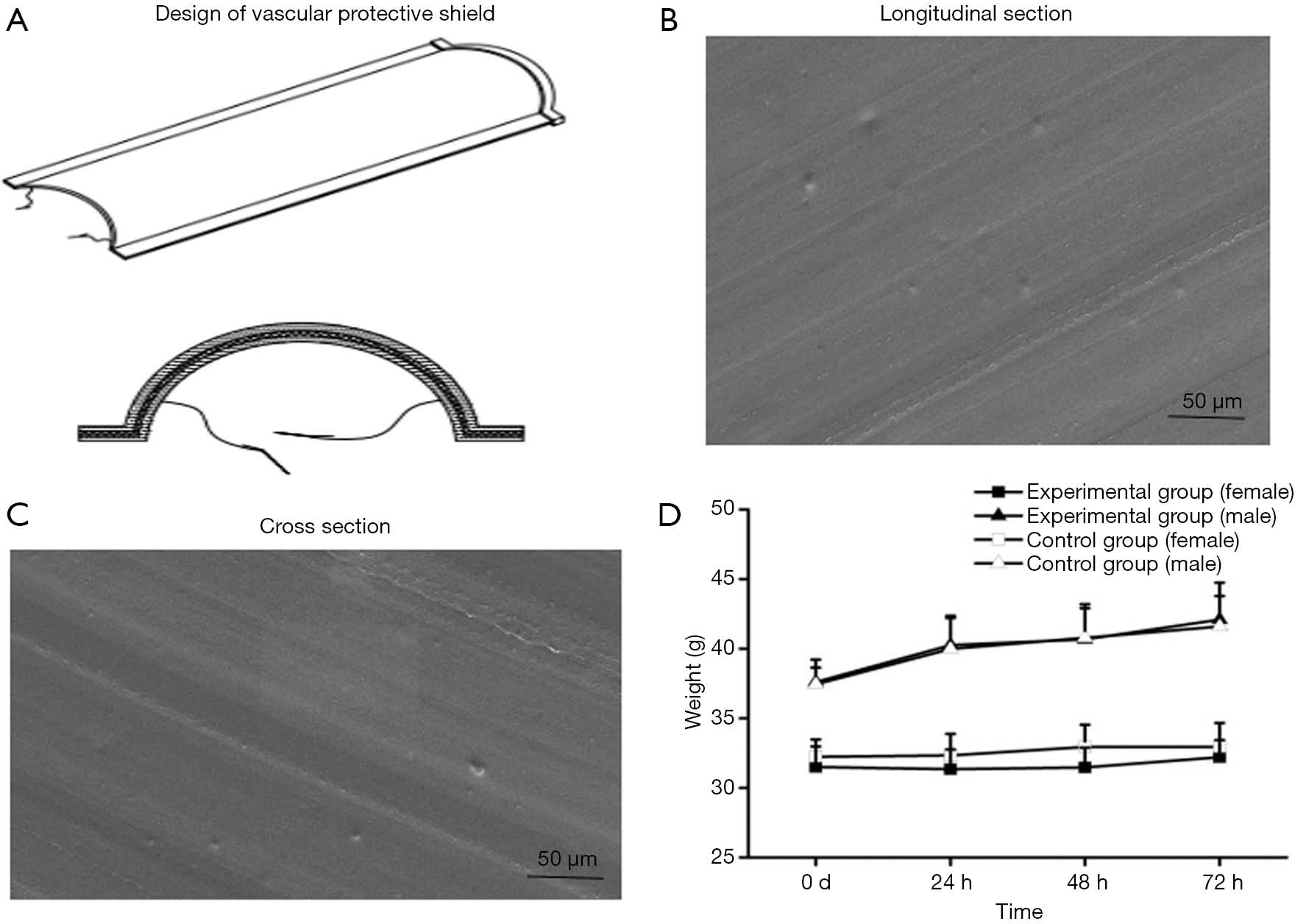 Figure 1 The drawing of vascular protective shield (A). The internal structure of cross section and longitudinal section was observed by SEM (B,C). The weight trends comparison of acute toxicity test in each group (D).

Non-toxicity of the vascular protective shield

An inguinal wound area (of 3 cm × 4 cm) was prepared in rabbits to expose the femoral artery. Soft tissue defects of the wound were observed (Figure 2A). The vascular protective shield covered the exposed vessels to prevent compression from VSD. Soft tissues on the both sides of the wound were tightly connected by passing a suture through from the holes on both sides of the shield (Figure 2B). 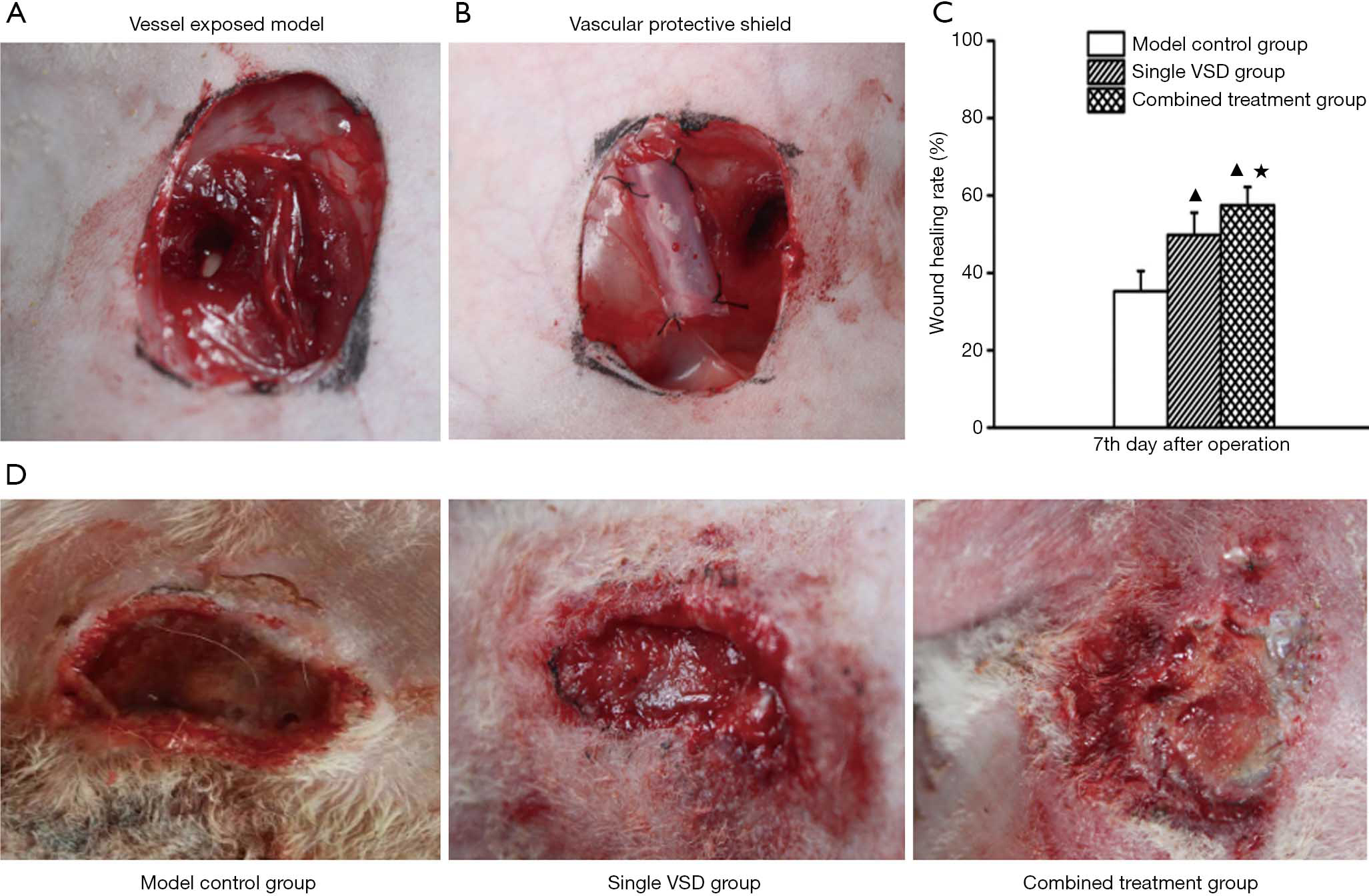 Figure 2 The preparation of bone and vessel exposed wound model (A). The vascular protective shield covers the exposed vessel (B). The wound healing rate and wound gross appearance change comparison in each group after 7 days (C,D). ★, P<0.05; ▲, P<0.01.

Wound area was narrowed down at post-injury day 7 in the control group. The formation of a small amount of granulation tissue at the wound margin and a local inflammatory response could be seen. In the VSD-only group, the wound area was significantly narrowed down. Moist wound margin and formation of a large amount of granulation tissue were observed, as well as buckling of vessels on the wound. Compared with the VSD-only group, wound narrowing and formation of granulation tissue were more pronounced in the combined shield-VSD group. Meanwhile, no obvious abnormalities in the exposed blood vessels of the wound were found (Figure 2C). Notably, the wound-healing rate at post-injury day 7 was higher in the VSD-only group (49.82%±5.72%) and the combined shield-VSD group (57.47%±4.70%) than in the control group (35.26%±5.23%) (P<0.05). Furthermore, the wound-healing rate was significantly higher in the combined shield-VSD group compared with that of the VSD-only group (P<0.05) (Figure 2D). 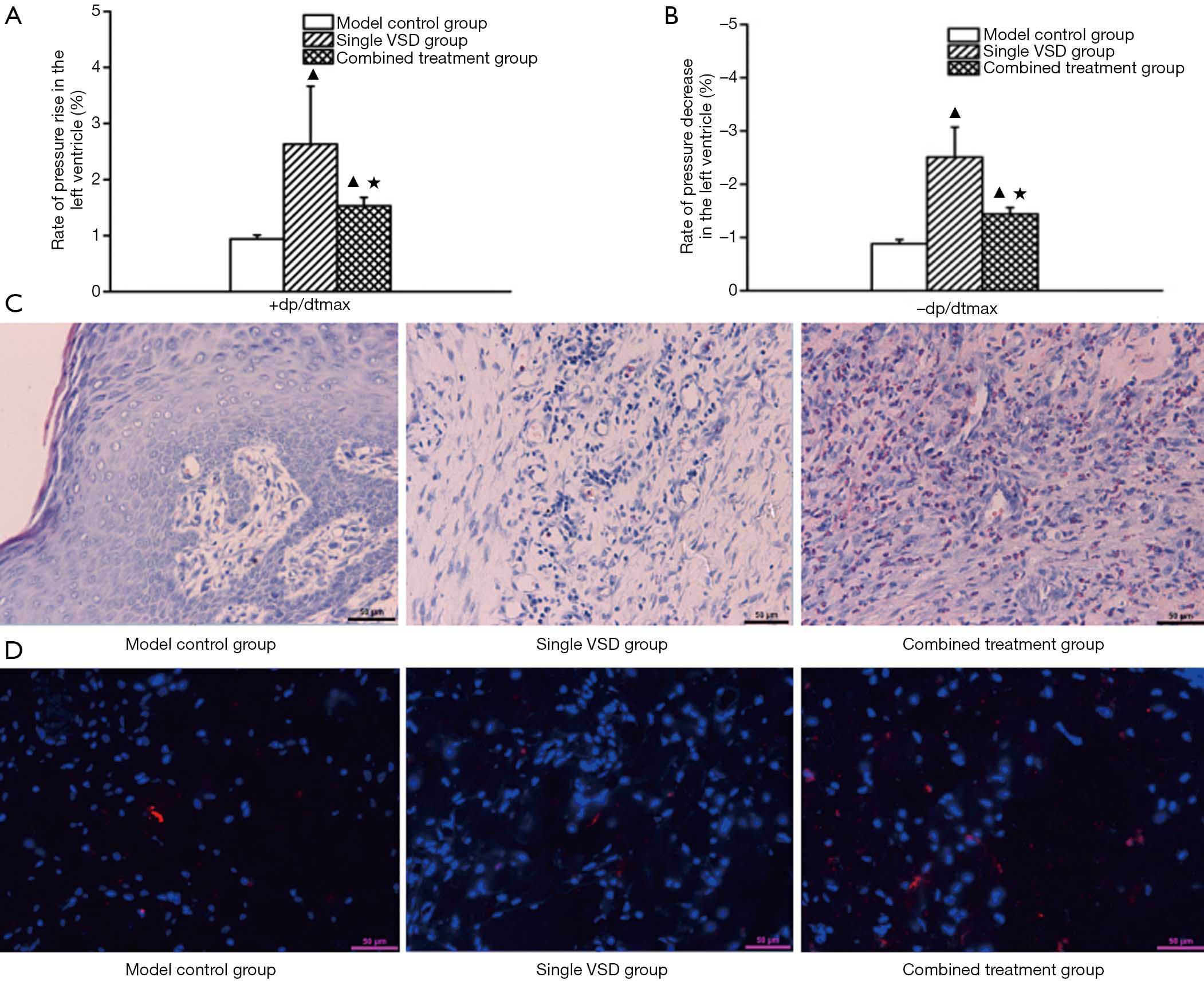 HE staining and immunofluorescence results

Histologically, tissue edema, inflammatory cell infiltration, and a small amount of granulation tissue were found in the control group. In the VSD-only group, abundant proliferation of fibroblasts, increased numbers of thickening collagen fibers (that were intense and disordered), and a small number of inflammatory cells were observed. Substantially more granulation tissue and collagen fibers were produced in the combined shield-VSD group. Meanwhile, epithelial cells and fibroblasts proliferated significantly (Figure 3C). Additionally, expression of CD31 was markedly higher in the combined shield-VSD group compared to the other two groups (Figure 3D). 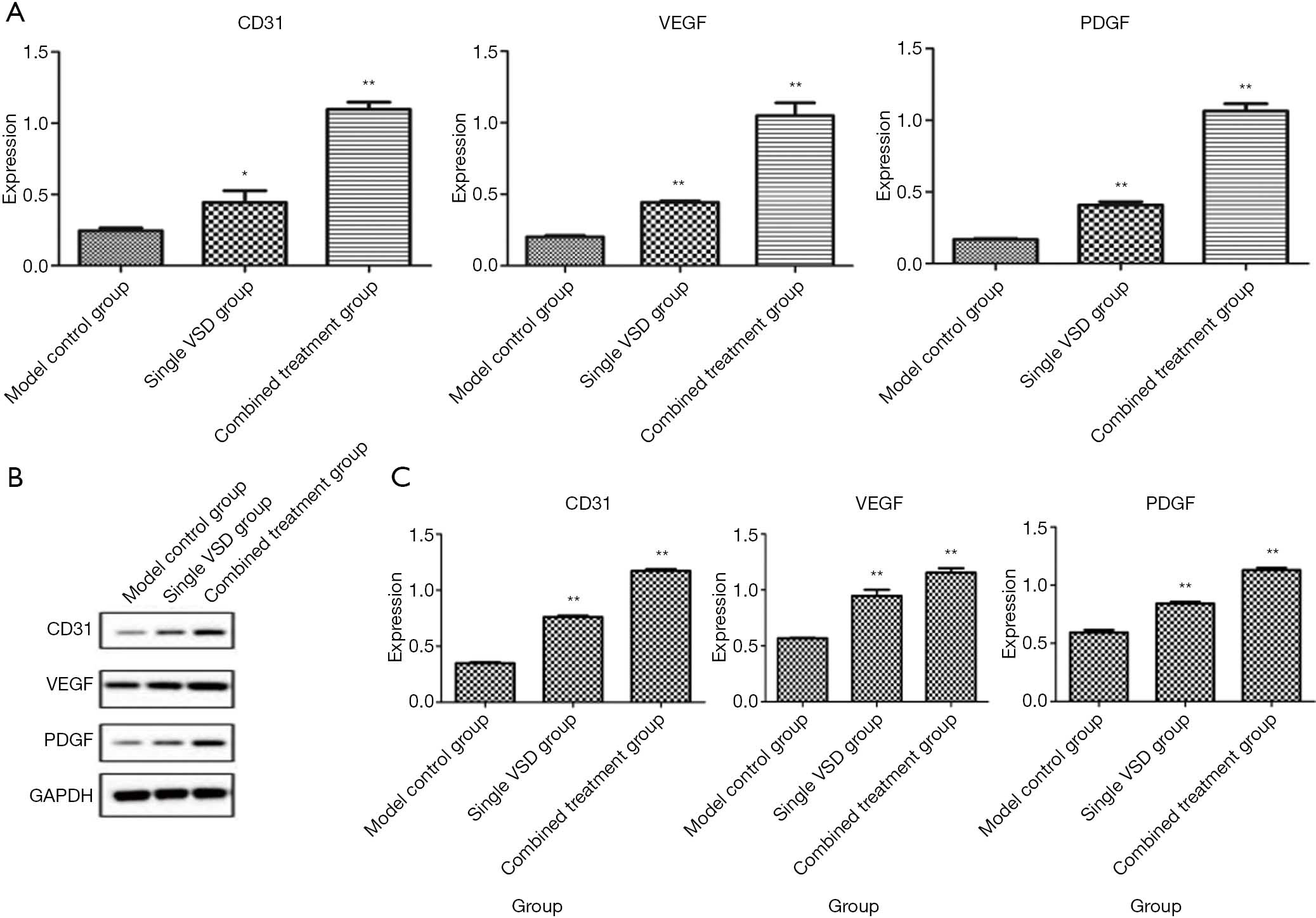 Compression of exposed vascular segments was observed on post-injury day 7. Blood vessels were normal in the control group. However, vascular trauma and congestion were obvious in the VSD-only group, with the vascular walls becoming narrow and deformed, thereby posing a significant risk of local thrombosis. The vascular protective shield combined with VSD greatly protected the exposed vessels, the blood vessels were intact and unobstructed, and no vessel wall damage was observed (Figure 5).

VSD is a physical negative pressure wound treatment that has become popular over the past decade. It substantially enhances the efficacy of repair and treatment of various acute, chronic, and complex wounds through controllable negative pressure for drainage and adsorption (15-17). Indications of VSD are relatively broad, and include diabetic foot wounds (18), acne wounds (19), burn wounds (20), traumatic wounds (21), and infectious wounds (22). Wound healing is classified into three stages: the inflammatory phase, proliferative phase, and scar-remodeling phase. As a complex process that is relatively independent and influential, multiple factors are involved, such as angiogenesis and granulation tissue formation (23-26). Abundant clinical evidence has proven the advantages of VSD in reducing wound edema, promoting formation of granulation tissue, and enhancing wound blood flow, thus triggering wound healing (27-29). DeFranzo et al. (30) proposed that VSD application significantly improves swelling of the lower limbs in patients with trauma and bone exposure after lower extremity injury, which provides a favorable condition for stage 2 skin grafting. Nevertheless, VSD-induced negative pressure may result in compression of exposed vessels, especially those on wounds with a hard base (i.e., bone surface). As a consequence, reduced local blood supply in the wound limits the timely removal of toxic substances and metabolites. Vascular occlusion or thrombosis may also occur. Eventually, vascular compression leads to ischemia and necrosis of wound skin, even in distal limbs. It is therefore necessary to avoid vascular compression on wounds at the time of VSD application.

Some limitations of this study should be noted. (I) Materials of our experimental vascular protective shield were directly and easily collected from the VSD system. In future studies, material composition can be optimized through the use of 3D printing technology, thereby potentially improving biocompatibility, biosafety, and individualized application. (II) The short observation duration (7 days) and single negative pressure selection (−150 mmHg) might have affected the dynamic evaluations on intervention period, negative pressure on the wound, and wound repair. Our forthcoming experiments will explore the influences of different observation durations and negative pressure selections on wound repair. (III) Research on early vascularization of the wound mainly focused on visible observation, pathological changes assessed by HE staining and immunofluorescence, and changes in the expression of vascular markers. In future, angiographic technologies should be applied for 3D visualization of the microvascular network, thus highlighting the importance of the vascular protective shield.

Collectively, this study confirmed that our experimental vascular protective shield combined with VSD effectively accelerated wound repair of exposed vessels, prevented compression of exposed vessels, and reduced influences on the systolic and diastolic capacities of myocardium. The combined therapy not only confirms the advantages of VSD in wound repair, but also demonstrates the benefits obtained by protecting the exposed vessels with the shield, which include an improvement of blood flow and supply of oxygen and nutrients. The experimental vascular protective shield combined with VSD is optimal for treating wounds with exposed vessels.

Reporting Checklist: The authors have completed the ARRIVE reporting checklist. Available at http://dx.doi.org/10.21037/apm-20-625

Conflicts of Interest: All authors have completed the ICMJE uniform disclosure form (available at http://dx.doi.org/10.21037/apm-20-625). The authors have no conflicts of interest to declare.

Ethical Statement: The authors are accountable for all aspects of the work in ensuring that questions related to the accuracy or integrity of any part of the work are appropriately investigated and resolved. The experimental protocol was set up according to the guidelines for animal research from the National Institutes of Health and the Committee on Animal Research and was approved by the Experimental Animal Ethics Committee of the Affiliated Jiangnan Hospital of Zhejiang Chinese Medical University (Xiaoshan Traditional Chinese Medical Hospital) (No. XSZYY-2017-020).