The clinical characteristics of pregnant women with epilepsy in China

Approximately 6.1% of pregnant women have a history of epilepsy (1). Pregnancy in women with epilepsy (WWE) is usually uneventful (2), however, complications that impact maternal and fetal health can occur (3). Most studies in pregnant WWE have focused on antiepileptic drug (AED) therapy due to the risk of teratogenic effects on the developing fetus. Few studies have described the demographic and clinical characteristics of pregnant WWE and investigated the influence of the type of epilepsy and hypertensive disorder of pregnancy (HDP) on complications in pregnant WWE.

The objective of this study was to describe the demographic and clinical characteristics of pregnant WWE and evaluate maternal and fetal outcomes, which will provide pre-pregnancy counseling and management in WWE, as well as prenatal and postpartum care of pregnant WWE.

We present the following article in accordance with the STROBE reporting checklist (available at http://dx.doi.org/10.21037/apm-19-341).

The study conformed to the provisions of the Declaration of Helsinki (as revised in 2013). This study was approved by Institutional Research Ethics Committee of Beijing Tiantan Hospital (No. KY 2019-029-02). Requirements for written informed consent were waived because all personal data were de-identified before the analyses.

Medical records of pregnant women with a history of epilepsy who attended the Beijing Tiantan Hospital, China, from January 2004 to December 2017 were retrospectively reviewed. Inclusion criteria were: (I) in-hospital delivery at Beijing Tiantan Hospital; and (II) a diagnosis of epilepsy according to the 2014 International League Against Epilepsy (ILAE) criteria (4).

Statistical analyses were performed using SPSS version 20. Between group differences for data with a normal distribution were evaluated with unpaired t-tests. Comparisons of categorical data were performed with the chi-squared test. P<0.05 was considered as statistically significant.

Epilepsy was genetic in 67.21% (41/61) of pregnant WWE. There were no significant differences in maternal variables, including age, median gestational age, gravidity, parity, or the incidence of seizures in pregnant women with a genetic or non-genetic basis for their epilepsy. Similarly, there were no significant differences in mode of delivery or perinatal outcomes (Table 2). 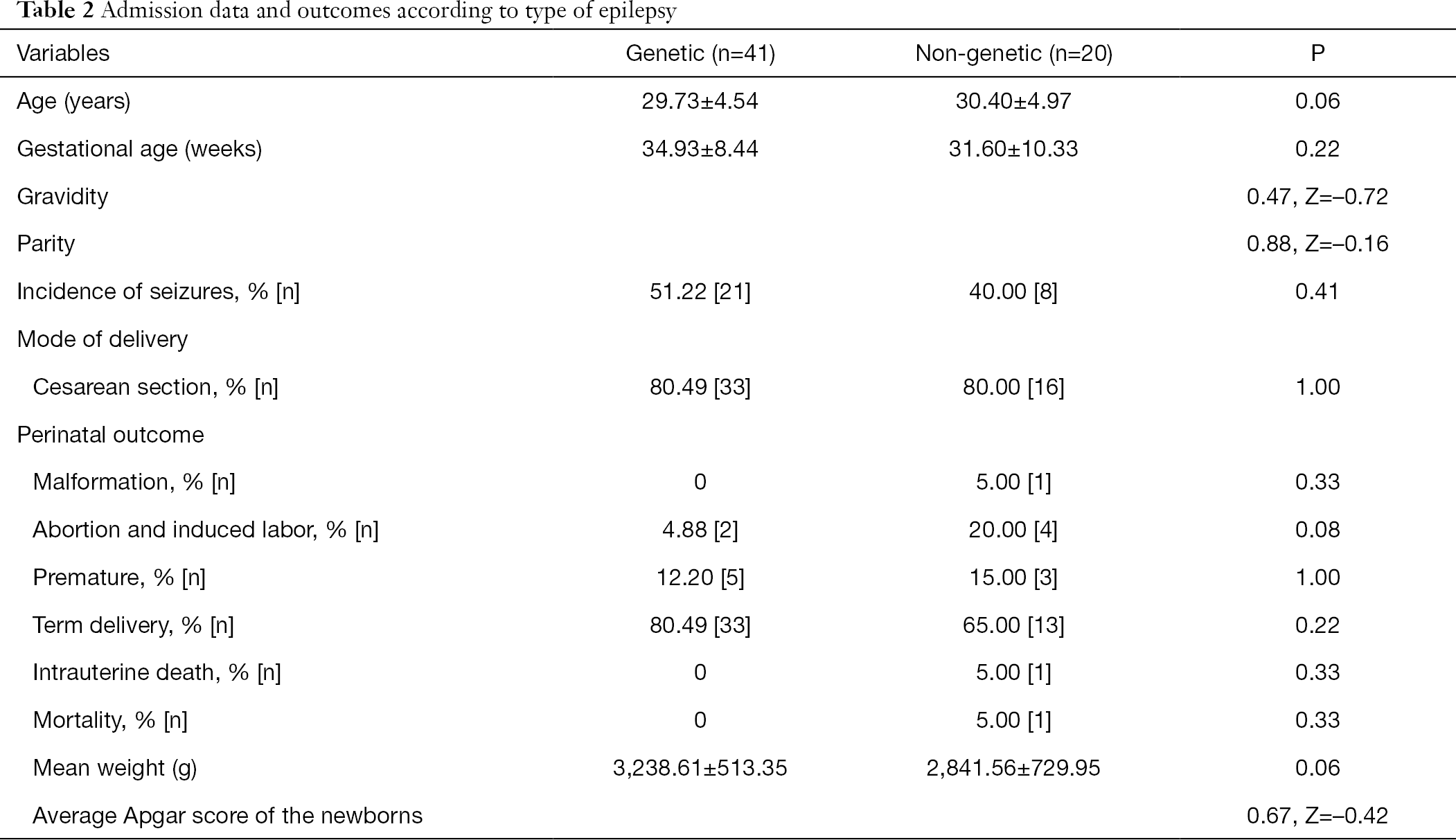 There was 14.75% (9/61) of pregnant WWE experienced HDP. The incidence of seizures was significantly higher in pregnant WWE with HDP compared with those without (P=0.01). There were no significant differences in maternal variables, including age, median gestational age, gravidity, or parity, or in mode of delivery or perinatal outcomes (Table 3). 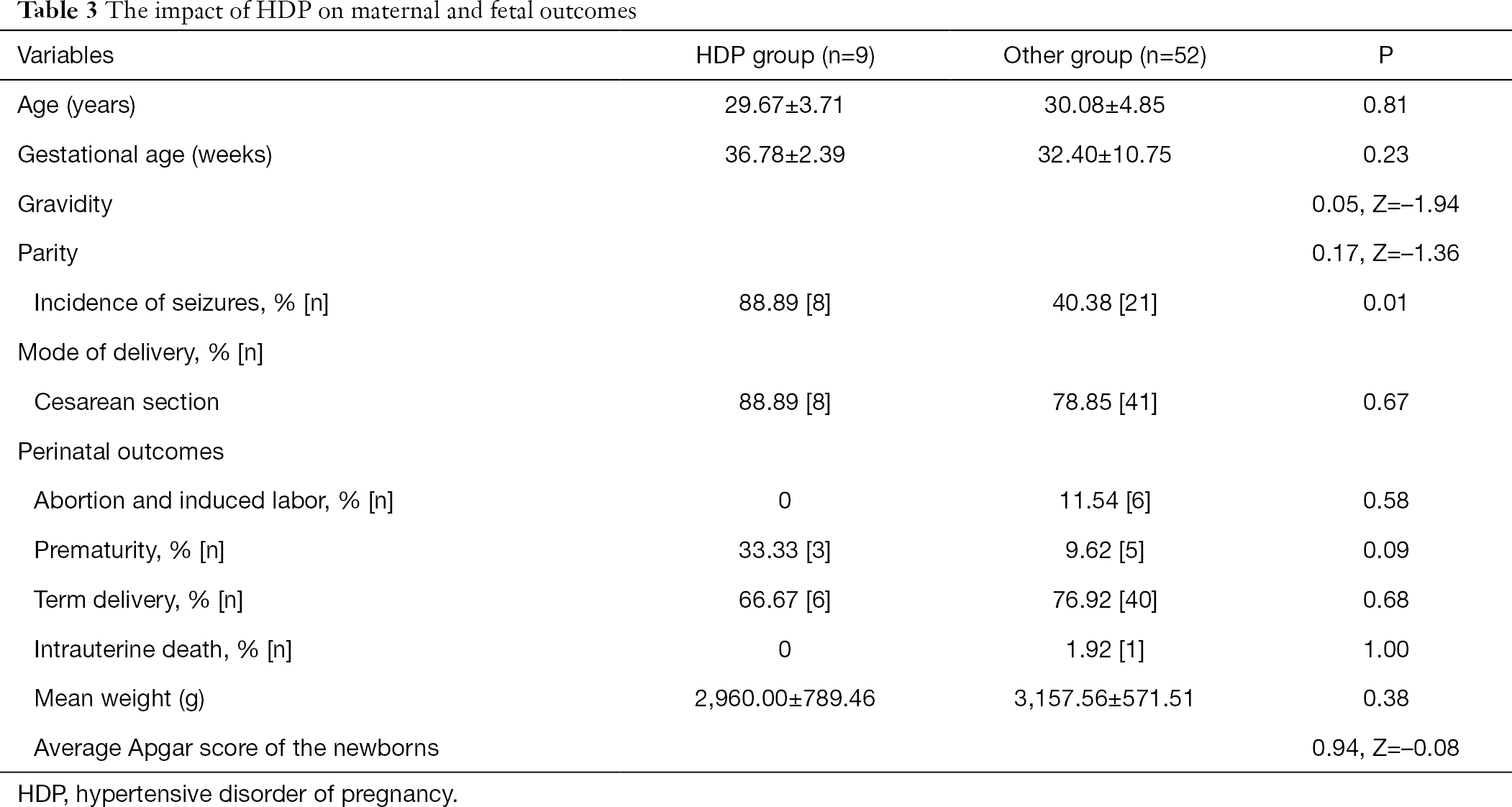 Epilepsy is a chronic brain disorder characterized by the sudden onset of seizures caused by sudden abnormal neuronal firing. To our knowledge, the present study includes the largest sample of Chinese pregnant WWE reported to date. The study was conducted at Beijing Tiantan Hospital, a medical transport center for pregnant and postpartum patients with critical craniocerebral disease. The proportion of patients with epilepsy was expected to be higher than in other hospitals in Beijing. The incidence rate (0.25%) is lower than that reported for the UK, where an estimated 0.6% of pregnancies were in WWE, according to the 2011 report of the United Kingdom Confidential Enquiries into Maternal Deaths (6).

Pregnant WWE have an increased risk of adverse events compared with those without epilepsy, including preeclampsia, preterm labor, stillbirth, spontaneous abortion, vaginal bleeding, hypertension, postpartum hemorrhage, placental abruption, and an increased risk of cesarean delivery. Severe cases may even result in maternal death (7). In the present study, we reported one maternal death, for a case mortality rate of 1.64%. A previous retrospective cohort study conducted using the 2007–2011 Nationwide Inpatient Sample in the US found that pregnant WWE had a 10-fold increased risk of death compared with those without epilepsy (3).

The seizures that characterize epilepsy and the use of AEDs can result in poor maternal, fetal, and neonatal outcomes. Maternal seizures can not only cause maternal injury and obstetric sequelae like placental abruption, premature labor, and delivery, but also lead to hypoxia in the fetus and transient late decelerations, decreased beat-to-beat variability, and compensatory tachycardia (8). AEDs can have teratogenic and long-term neurodevelopmental effects on the fetus. Taken together, these data emphasize the importance of appropriate preconception consultation, counseling, and planning of WWE and their clinicians to ensure epilepsy and seizures are safely managed during pregnancy.

Several factors increase the frequency of seizures during pregnancy. Metabolic changes during pregnancy alter the pharmacokinetics of AEDs, increasing volume of distribution, renal clearance, and hepatic metabolism (9). Physiological changes during pregnancy, such as sodium retention and edema, can lead to HDP. These alterations can also increase brain irritability so that minimal sensory stimuli, including fatigue, nervousness, and emotional changes, can trigger seizures. In our study, 14.75% of pregnant WWE experienced HDP, and the incidence of seizures in pregnant WWE with hypertensive disorder was significantly higher than those without. The incidence of hypertension in pregnant women without seizures has been reported to be about 13.2% in a previous study (10).

These findings indicated that clinicians should make every effort to monitor and treat HDP in WWE. Neurologists and obstetricians should work together, taking a multidisciplinary approach to the management of pregnant WWE, to optimize pregnancy outcomes.

As this is a retrospective study, we could not confirm the causal relationship of hypertensive disorder and the incidence of seizures. A previous study has showed that neuropathological complications were associated with hypertensive disorders of pregnancy (11). Unfortunately, there are no reliable predictors of seizures during pregnancy (2). Therefore, seizures should be controlled before pregnancy, and individualized therapeutic levels of AEDs should be established with monotherapy used where possible. WWE who are seizure-free in the 9 months prior to pregnancy have an 84–92% chance of remaining seizure-free during pregnancy on their current regimen (12). In our study, 52.46% of women remained seizure-free throughout pregnancy. These findings were consistent with previous studies that reported 58.3–66.6% of WWE participating in EURAP, the registry of international AEDs and pregnancy, were seizure-free throughout pregnancy (13,14). The risk of seizure during pregnancy corresponds to seizure type; WWE with complex partial seizures are more likely to experience seizures during pregnancy (15).

There were several limitations in this study. First, the sample size was not large enough to allow broad generalization of the results across different healthcare settings and regions. Second, we might have underestimated the proportion of pregnant WWE among the pregnant women attending the Beijing Tiantan Hospital, as cases may have been missed during screening. Third, the current study did not investigate the long-term outcomes of newborns. Fourth, brain images and EEGs were not performed in all patients to differentiate genetic and non-genetic epilepsies. Fifty, we did not set an internal control group to show the incidence of hypertension in pregnant women without seizures.

In conclusion, this study described the demographic and clinical characteristics of pregnant WWE, as well as the maternal and fetal outcomes. We found there were no significant differences in maternal or fetal variables, including age, median gestational age, gravidity, parity, incidence of seizures, mode of delivery or perinatal outcomes between pregnant women with a genetic and non-genetic basis for their epilepsy. The incidence of seizures was significantly higher in pregnant WWE with hypertensive disorder than those without. These data highlight the need that neurologists and obstetricians should work together to adopt a multidisciplinary approach to manage pregnant WWE in order to optimize pregnancy outcomes.

The wordings of the main text and/or figures/tables have been checked by a native English-speaking expert and we appreciate the assistant of the following web https://fanyi.baidu.com/translate.

Reporting Checklist: The authors have completed the STROBE reporting checklist. Available at http://dx.doi.org/10.21037/apm-19-341

Conflicts of Interest: All authors have completed the ICMJE uniform disclosure form (available at http://dx.doi.org/10.21037/apm-19-341). The authors have no conflicts of interest to declare.

Ethical Statement: The authors are accountable for all aspects of the work in ensuring that questions related to the accuracy or integrity of any part of the work are appropriately investigated and resolved. The study conformed to the provisions of the Declaration of Helsinki (as revised in 2013). This study was approved Institutional Research Ethics Committee of Beijing Tiantan Hospital (No. KY 2019-029-02). Requirements for written informed consent were waived because all personal data were de-identified before the analyses.