Cardiogenic cerebral embolism is one of the most common causes of ischemic stroke, accounting for approximately 20% to 30% of the total (1). There is a history of nonvalvular atrial fibrillation in about one half the cases, of valvular heart disease in one fourth, and of left ventricular mural thrombus in almost one third (2). In general, cardioembolic stroke is associated with more severe neurological deficits and higher early mortality, as well as a worse functional outcome (3). Therefore, it has led to enormous socio-economic impacts and burdens (4).

Oral anticoagulant (OAC) therapy is currently recommended for the prevention, and multiple clinical trials and meta-analyses have demonstrated that OAC could reduce the risk of stroke by more than 60%, even in patients >75 years old (5-7).

Despite strong evidence for the efficacy of the classic OAC warfarin, however, several limitations such as variable dose-response relationship and narrow therapeutic window have led to it being underused (8,9). In order to exert the medication effect, close monitoring with periodical blood tests are required to maintain the international normalized ratio (INR) within the therapeutic range. Meanwhile, lack of adherence to treatment and interactions with drugs and foods often result in patients being under effective INR levels and therefore their risk of stroke rises (10,11). In addition, complications cannot be thoroughly avoided, mainly hemorrhages in different locations of the body, including the brain, which have hindered broader use, especially among the elderly, and have also made the prescription of warfarin challenging for both clinicians and patients (12). According to several studies, the proportion in therapeutic range is approximately 60% to 70%, which is lower in China (13,14). To understand the risk of hemorrhage and assess the risk/benefit of OAC treatment, some scales such as HAS-BLED (15) scale can be used for assessment, especially for intracranial hemorrhage (16).

The novel oral anticoagulants (NOACs), which do not require periodic blood tests and with a lower interactions rate, could help to optimize the prevention of cardioembolic stroke. In clinical trials, they have shown noninferiority to OAC in preventing ischemic events and a lower incidence of hemorrhagic complications (17-19). However, its expensive cost and lack of specific antagonists are hampering its prescription (20).

Our objective was to analyze the patients who underwent OAC therapy but still presented cardioembolic stroke, and to assess their etiology, treatment efficacy, and outcomes, especially the INR value in the acute phase. We present the following article in accordance with the STROBE Reporting Checklist (available at http://dx.doi.org/10.21037/apm-19-366).

This study was conducted in accordance with the Declaration of Helsinki (as revised in 2013). This study was approved by the Ethics Committee of Shanghai Tongji Hospital (No. SHTJ-2019-044) and individual consent for this retrospective analysis was waived.

We retrospectively reviewed 5,297 patients who were hospitalized in our neurology department with the diagnosis of ischemic stroke during 2014–2017. Of these, a total of 306 patients (5.8%) with etiology of atrial fibrillation and underwent OAC treatment (warfarin) at the onset of stroke were analyzed.

The following epidemiological variables of each patient were collected: gender, age, cardiovascular risk factors (hypertension, diabetes, dyslipidemia, and smoking), embolic cardiopathy (including atrial fibrillation, valvulopathy, and cardiomyopathy), CHADS2 score (21), CHA2DS2-VASc score (22) and HAS-BLED score, INR value in acute phase, stroke etiology [TOAST criteria (23)] and Oxfordshire community stroke project classification (OCSP) classification (24). The condition of the medication use (maintenance or suspension), and reintroduction of the anticoagulant therapy after the suspension, also the use of NOACs were recorded. Similarly, the prognosis was assessed by analyzing baseline status, modified Rankin Scale (mRS) at discharge and 3 months later.

The patient was considered to be within the therapeutic range of anticoagulation if the INR value was 2.0–3.0.

The neurologists of our department performed the neurological examination and calculated the mRS scale score at the time of discharge and 3 months follow-up.

Statistical analysis was performed using SPSS version 22.0. Chi-square test was used in univariate categorical variables and Mann-Whitney U test was used in non-parametric variables. In the regression analysis, the variables related to prognosis were adjusted based on age, cardiovascular risk factors, NIHSS scores, baseline mRS score, and whether received thrombolytic therapy or not. The INR value of 1.7 was defined as a cut-off point by using CUTOFF FINDER software to determine whether the patients had an anticoagulant effect. A value of P<0.05 was considered statistically significant.

All patients were receiving warfarin treatment for thromboembolism, all of whom had atrial fibrillation (including paroxysmal and permanent), either isolated (n=291) or with other heart diseases (n=15; 4 cases of cardiomyopathy, 11 cases of valvulopathy). Regarding the presence of cardiovascular risk factors, 56.2% [172] of patients with hypertension, 24.8% [76] were diabetics and 20.9% [64] with dyslipidemia. About 26.5% [81] had a smoking habit (72.8% of them were still active consumption). Similarly, one third [101] had a history of previous ischemic stroke including transient ischemic attack (TIA).

A total of 21 (6.9%) cerebral hemorrhagic transformations occurred, 8 of which underwent intravenous and/or mechanical thrombolysis. There were 7 cases of parenchymal hematoma (PH) 1 or 2 type.

Regarding OAC treatment, in the acute phase, 233 patients (76.1%) continued to use, and the remaining 73 patients were suspended due to hemorrhagic transformation [16], acute stress ulcer [9] or extensive infarction [48].

Of the patients in whom OAC was suspended, 18 (24.7%) resumed treatment after an average of 32 days (range, 7–85 days). The remaining patients did not restart treatment for the following reasons: a total of 47 patients (64.4%) died (during hospitalization and follow-up); 8 patients (11.0%) had a mRS score of 5 or high HAS-BLED score during follow-up (Figure 1). 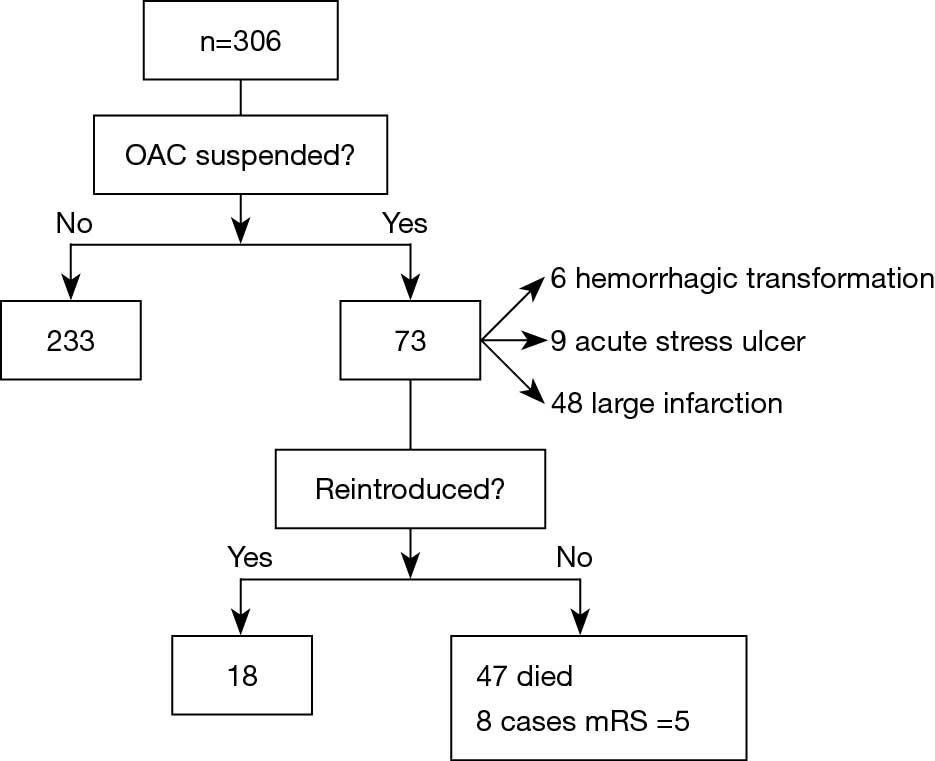 Of 251 survivors (excluding the dead and un-restarted anticoagulants patients) with nonvalvular atrial fibrillation, only 39 were modified to NOACs (36 dabigatran, 2 rivaroxaban and 1 apixaban).

After discharge, 252 patients were followed-up (38 patients died during hospitalization and 16 cases were lost). At 3 months after stroke, excluding 9 deaths due to stroke recurrence or complications during this period, 70 of the survival patients (22.9% of the initial series) remained functionally dependent.

Analyzing the INR at the onset of stroke, the maximum difference could be obtained with the value of 1.7 as the cut-off point. Patients with INR ≥1.7 had significantly better prognosis than those with INR <1.7, both in the percentage of patients with functional independence (78.9% vs. 41.2%) and in lower mortality (7.0% vs. 25.0%) (P<0.001) (Figure 2). Even taking the INR value of 2.0 as the cut-off point, which represents that this boundary was considered to be within the effective therapeutic range, there was also significant difference in the prognosis of the stroke when INR ≥2.0 (P<0.01).

Almost three-quarters of our patients were below the therapeutic INR range at the onset of stroke. Some patients were due to poor medication compliance, the remaining patients, despite proper intake of the drug, still had difficulty maintaining therapeutic levels and, therefore, were inadequately protected from stroke (10,25).

The remaining one-quarter of patients had an INR ≥2.0. Although many patients had one or more cardiovascular risk factors, sometimes it is difficult to determine the precise mechanism, the choice of a platelet inhibitor or anticoagulant drug may be difficult, this could not be inferred to be a double pathogenesis of stroke combined with atherothrombosis or an indeterminate cause. Therefore, despite being within the therapeutic range, patients still had a cardioembolic stroke due to underlying heart disease. Patients who had suffered an ischemic stroke with a high-risk source of cardiogenic embolism should generally be treated with anticoagulant drugs to prevent recurrence. In other studies (26), many stroke events were attributed to other causes, which contradicted our conclusion.

In the majority of patients, OAC treatment was maintained on admission because of the high risk of embolism due to their underlying heart disease. Almost all of prescriptions were justified on the basis of their scores of the CHADS2 and CHA2DS2-VASc scales.

Anticoagulant therapy was suspended in patients with hemorrhagic transformation or extensive infarction, but it could be resumed if no hemorrhagic events occurred. There is a paucity of data from large, prospective, randomized studies to answer the appropriate timing of resumption of anticoagulation. It is usually recommended to reintroduce anticoagulation in 1–2 weeks after stroke, except for patients with large infarcts, poor overall neurological function or other risk factors for hemorrhage (27). When maintaining or restarting OAC, the risk of recurrent hemorrhage must be weighed against the risk of an ischemic cerebrovascular event. Both the CHA2DS2-VASc score and the HAS-BLED score need to be considered together to determine that the risk of ischemic events is higher than the risk of hemorrhagic events.

The OAC can be reintroduced when without complications, however, the prescriptions of NOACs are still inadequate. According to recent studies, it could be considered that there had been OAC therapeutic failure when patients still presented stroke and NOACs were recommended to use (28). However, only 15.5% of the candidate survivors had been switched to NOACs in our department. During the last few years, several new NOACs have been developed and approved in clinical applications, they represent important advances over warfarin owing to more predictable pharmacological profiles, fewer drug-drug/food interactions, an absence of major dietary effects, and less risk of intracranial bleeding. However, clinician and patient preference, and especially, the cost may influence the decision to initiate them.

Regarding the evolution, approximately 15.4% of the patients died between the acute phase and 3 months after stroke, and almost a quarter was functionally dependent at 3 months. These results were consistent with the worse prognosis of cardioembolic stroke (4).

Considering the initial INR, a value ≥1.7 was associated with a better functional prognosis. It had been reported that patients treated with OAC presented smaller size infarcts compared to those who did not, also established an inverse correlation between the INR value at admission and the volume of the lesion on cranial MRI (29). In a recent study, it was observed that INR value ≥2 was also associated with a better prognosis (30). In our study, patients with INR ≥2.0 also had a better prognosis, but the difference was more significant when taking 1.7 as the cut-off point. Curiously, our patients with INR <1.7 who received thrombolysis intravenously, did not represent a significant benefit compared to those who did not. It may because these patients had more severe initial neurological deficits (the median NIHSS score was 14) and nearly half of them presented large intracranial vessel occlusion (40% was TACI).

Interventional procedures and complications such as hemorrhagic transformation, which may also influence evolution, were distributed homogeneously in both groups.

The limitations of this study are those inherent in a retrospective analysis, although it has the advantages of a single-center study, which reduce the deviations in the protocol and make the application of treatments and assessments more homogenous. In addition, only taking admitted patients into account, it had not been possible to study some patients with TIA or mild stroke who were treated in the outpatient clinic or transferred to other medical centers. And also, this study had not evaluated the time in therapeutic range (TTR). Thus, we did not assess the history of anticoagulation. These factors may bias our conclusions.

In conclusion, we highlighted that some patients presented ischemic strokes despite being treated with OAC, especially those with a subtherapeutic INR value, and these stroke events were still cardioembolic etiology, which raises the failure of anticoagulant therapy. Finally, despite the ineffectiveness of the OAC, the prognosis was better when the INR ≥1.7 at the initiation of the stroke.

We thank some members in the Department of Neurology, Shanghai Tongji Hospital, Tongji University School of Medicine.

Funding: This study was supported by Priority of Shanghai Key Discipline of Medicine (2017ZZ02020).

Conflicts of Interest: All authors have completed the ICMJE uniform disclosure form (available at http://dx.doi.org/10.21037/apm-19-366). The authors have no conflicts of interest to declare.

Ethical Statement: The authors are accountable for all aspects of the work in ensuring that questions related to the accuracy or integrity of any part of the work are appropriately investigated and resolved. This study was conducted in accordance with the Declaration of Helsinki (as revised in 2013). This study was approved by the Ethics Committee of Shanghai Tongji Hospital (No. SHTJ-2019-044) and individual consent for this retrospective analysis was waived.