Southern China is one of the high-incidence areas of nasopharyngeal carcinoma (NPC) in the worldwide. Currently, the effective treatment strategy of NPC is radiotherapy, and the 5-year survival rate was 71.7–89.2%, 50.2–75.4%, 53.1–60.3% and 30.1–37.7% for patients at stage I, stage II, stage III and stage IV, respectively (1-5). For mid and late stage’s patients, the total survival rate decreased significantly due to the high local recurrence rate and metastasis rate by radiotherapy alone. Concurrent chemoradiotherapy (CCRT), as routine therapy strategy of NPC (6,7), accompanying with improved therapeutic effect, high-dosage cytotoxic agents usually lead to serious toxic side reaction. Therapy resistance, especially cisplatin (DDP) resistance, is the main cause of disease failure (8). Hence, a new potent systemic management that leads to the clinically desirable to develop treatments with fewer side effects (9) is urgent for this cancer.

Epidermal growth factor receptor (EGFR), an important member of the ErbB family of receptors, its overexpression is a common characteristic of head and neck squamous cell carcinomas (HNSCC), and it usually predicts a poor clinical outcome. By binding to the ligand, EGFR is phosphorylated and activated, which leads to activation of the downstream signaling cascades, facilitating carcinoma cells proliferation, migration and invasion and inhibiting apoptosis. The best-known involved pathways include the rat sarcoma (Ras)/mitogen-activated protein kinase (MAPK) and phosphoinositide 3-kinase (PI3K)/protein kinase B (AKT)/mechanistic target of rapamycin (mTOR) signaling pathways, whose roles in promoting tumor growth, survival, and progression are well characterized (10). Besides, EGFR modulates DNA double-strand break (DSB) repair by regulating non-homologous end-joining via MAPK signaling (11).

Eroltinib is a small, reversible tyrosine kinase inhibitor that competes with adenosine triphosphate for binding to the intracellular catalytic domain of EGFR, inhibiting phosphorylation. In the field of lung cancer and other cancers, there are many reports demonstrate the antitumor efficacy of EGFR inhibitors in combination treatment, especially in the treatment of non-small cell lung cancer and squamous-cell lung cancer (12-14). In a study of an anti-angiogenesis drug combination of erlotinib and a ruthenium-based compound, Berndsen et al. (15) validated the drug combination results in strong synergistic inhibition of cell viability in human endothelial and human ovarian carcinoma cells and also confirmed effective anti-angiogenic and anti-proliferative activity in vivo. Yoo et al. (16) and Gilbert et al. (17) also demonstrated that erlotinib combined with radiotherapy and chemotherapy improved the effective rate of advanced HNSCC. Anisuzzaman and colleagues examined the combined effects of erlotinib and BKM120 on cell growth suppression, apoptosis and signaling pathway, and they demonstrated that cotargeting of EGFR and PI3K is synergistic and induces apoptosis of HNSCC cell lines by inhibiting both axes of the AKT-mTOR pathway and translational regulation of antiapoptotic Bcl-2 proteins (18). But because the biological characteristics of NPC are quite different from the other HNSCCs, it is not clear whether erlotinib enhances the efficacy of chemoradiotherapy on NPC.

The aim of this study was to evaluate the combined effects of erlotinib and chemoradiotherapy on biological characteristics of NPC cells and explore the possible reasons.

Next, cells were divided into control group and four treatment groups (Group I–IV). Control group was set as blank group without any treatment, the four treatment groups all received irradiation of 4 Gy X-ray. Besides, at the optimal working concentration, erlotinib, DDP and erlotinib combined with DDP was given Group II, Group III and Group IV, respectively. Irradiation (dose rate of 1 Gy/min) was followed after 12 h of administration. At 24 and 48 h post-irradiation, cell growth-inhibition rate was calculated as follows:

The chambers were put into 24-well plates and coated with Matrigel (100 µL/well) overnight at 37 °C. CNE2 cells were grouped and treated according to MTT assay, and continued to be cultured for 24 h after completion of irradiation. Then they were made into cell suspension (5×105 cells/mL) and seeded into the upper chamber (200 µL/well). Concurrently, the lower chambers were filled with 500 µL medium containing 10% FBS. After 24 h, cells were fixed and stained with crystal violet for 10 min. Cells number was observed microscopically.

For cell scratch test, CNE2 cells in logarithmic growth phase were seeded into 6-well plates (5×105 cells/well) and treated as mentioned above. Cells number of migration was detected using a digital camera system and imaged at 0 and 24 h postirradiation.

CNE2 cells seeding in 6-well plates (5×105 cells/well) were treated as mentioned above and fixed in 95% ethanol at 24 h postirradiation. Following rehydration in PBS for 30 min at 4 °C, cells were treated with 1% RNAase for 30 min at 37 °C and stained with propidium iodide for 5 min. Then cells were analyzed using a flow cytometer. 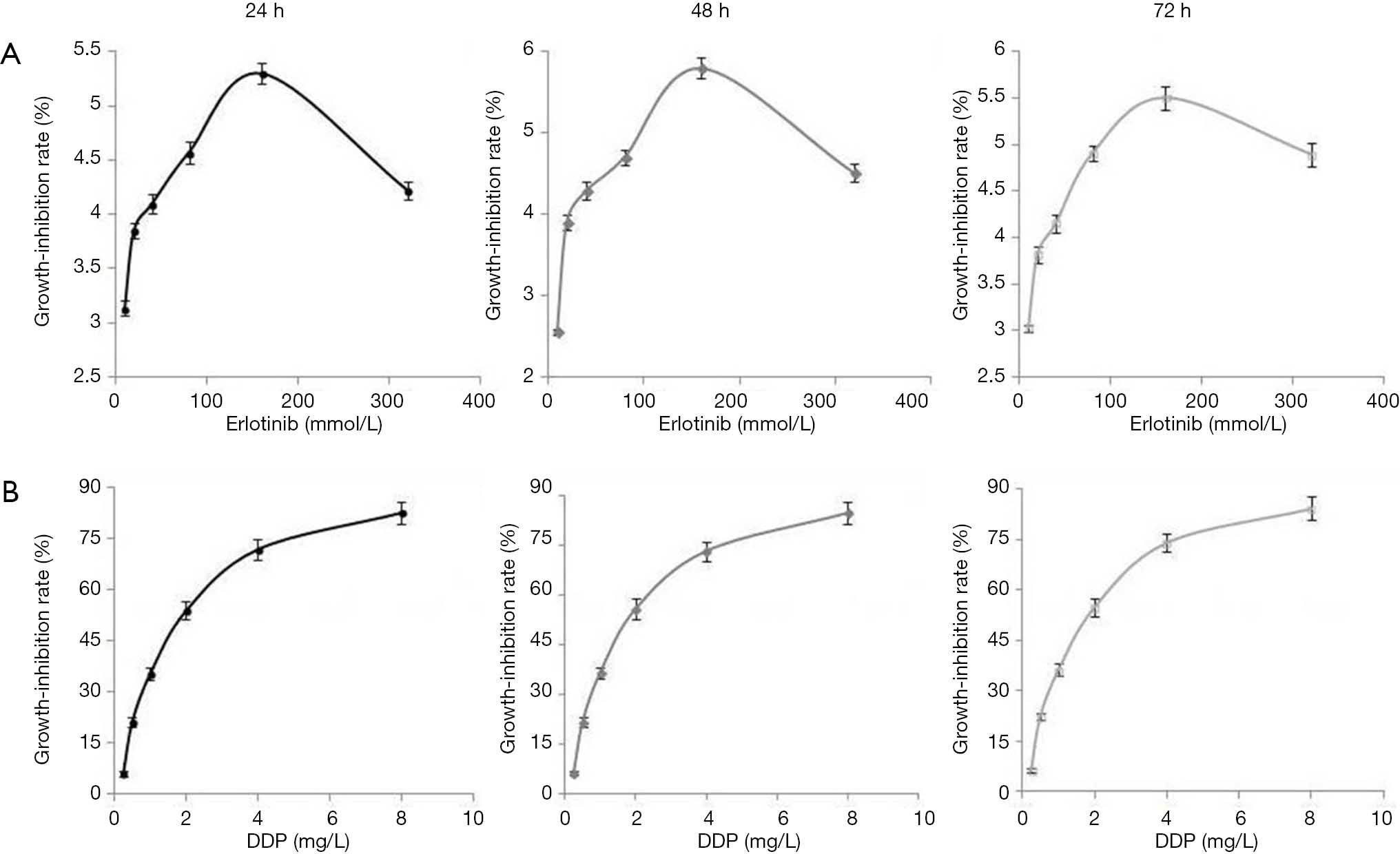 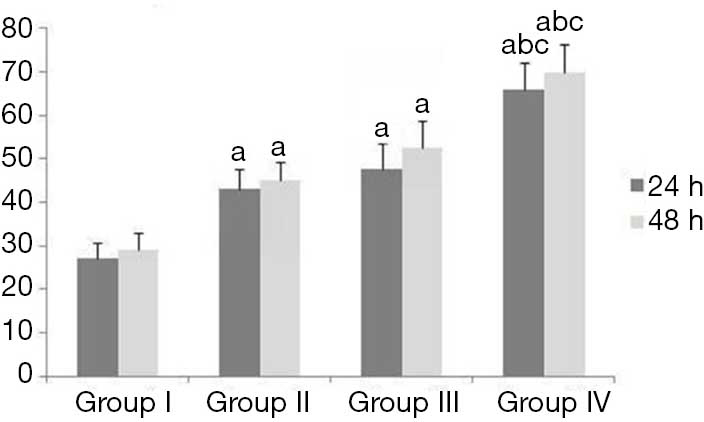 Effects of erlotinib combined with DDP and irradiation on the abilities of invasion and migration, apoptosis and cell cycle distribution of CNE2 cells

After treatment, the results of Table 3, Figure 3 and Figure 4 showed that compared with Group I, the invasion/migration ability of the other three treatment groups all showed significant reduction (P<0.05), and this reduction of Group IV was the most significant (P<0.05). Concerning the apoptosis rate, Group II–IV were all higher than Group I, and Group IV had the highest (P<0.05, Figure 5).

Figure 3 CNE2 cells’ migration ability was determined through scratch test at 0 and 24 h after treatment by microscopy (100×).

The combined effects of erlotinib, DDP and irradiation on EGFR downstream signaling pathways

Because EGFR binding to its ligand was strongly related to DNA damage repair of tumor cells after radiotherapy/chemotherapy (11), we speculated erlotinib intervention made it hard for EGFR to bind to ligand, leading to the failure of DNA damage repair. Meanwhile, erlotinib could disturb cell cycle distribution and eventually intensified apoptosis induced by DDP or/and irradiation. Figure 6 showed when erlotinib combined with DDP and irradiation, the reductions of EGFR signal pathways proteins (p-ERK1/2, p-AKT and p-EGFR) expression levels were the most significant (P<0.05), which indicated erlotinib’s inhibitory effect on EGFR signal pathway activation was one of the main mechanisms in combination treatment.

Erlotinib can inhibit proliferation, invasion, metastasis, and angiogenesis in tumor cells (19,20). When used as monotherapy, the response rate of erlotinib was not satisfactory. However, the promising disease control rate, time-to-progression and overall survival rate in many trials encouraged researchers to explore the use of erlotinib in conjunction with other anticancer therapies (21-23). In the present study, erlotinib combined with DDP and irradiation showed the most significant reduction in cell viability, invasion and migration ability and the highest increase in apoptosis, when compared to other treatment strategies. These results indicated that erlotinib enhanced the sensitivity of cells to irradiation or/and DDP (24-26).

In order to explore the mechanisms involved, the expression and activation of EGFR downstream signaling pathways proteins in NPC cells were analyzed. Our results demonstrated these proteins expression and activation were inhibited obviously, when cells received erlotinib combined with irradiation and DDP. These results indicated erlotinib prevented activation of EGFR downstream signaling pathways, thus suppressing DNA damage repair in tumor cells (27,28). Though cell cycle G2/M phase arrest was enhanced by combined treatment strategy, this arrest could not be the buffer time for repairing DNA damage induced by irradiation/cytotoxic agent because of erlotinib intervention. Instead, the cell cycle arrest (at G2/M phase) intensified DNA damage induced by DDP or/and irradiation. As a result, erlotinib intensified apoptosis rate, because it suppressed DNA damage repair, tumor cells’ sensitivity to chemoradiotherapy enhanced. Besides, anti-EGFR therapy could reduce the percentage of cells in S phase (because elevated percentage of cells are in G2/M phase, sensitive phase to radiotherapy) (29).

Nevertheless, some studies reported erlotinib monotherapy barely killed tumor cells (30,31). When we designed the optimal working concentration of erlotinib, we found the inhibitory effect on tumor cells growth was very weak (the highest inhibitory effect was less than 6%) and not dose-dependent. This from a side, confirmed erlotinib monotherapy had little effect on CNE2 cells. Zhang et al. also confirmed that treatment of NPC cells with erlotinib alone had no significant effect on tumor cell proliferation (32). Given this, it can be assumed that erlotinib takes effect perhaps depending on DNA damage induced by irradiation or cytotoxic agents.

In conclusion, in combination treatment with radiotherapy and cytotoxic agents, erlotinib enhanced tumor cells’ sensitivity to chemoradiotherapy, whose reason can be attributed to its inhibitory effect on DNA damage repair, and then reducing the chemoresistance and radiotherapy resistance of tumor cells.

Conflicts of Interest: All authors have completed the ICMJE uniform disclosure form (available at http://dx.doi.org/10.21037/apm-19-466). The authors have no conflicts of interest to declare.

Ethical Statement: The authors of this study are accountable for all aspects of the work in ensuring that questions related to the accuracy or integrity of any part of the work are appropriately investigated and resolved.