Thalidomide is currently used for the treatment of diseases such as leprosy and multiple myeloma (9,10). Several studies (11-13) have found that thalidomide may also has good anti-pulmonary fibrosis effects, but the underlying pharmacological mechanisms have not been well-elucidated. Therefore, more studies on this issue are warranted. In this study, we aimed to analyze the effect of thalidomide on the activation of CTGF gene promoter induced by TGF-β1 in human embryonic lung fibroblast (HELF), thereby providing further evidence on the treatment of IPF.

This present study obtained ethics approval from the ethics committee of our hospital (2018-1029-c1) and was conducted in accordance with the Declaration of Helsinki (as revised in 2013). 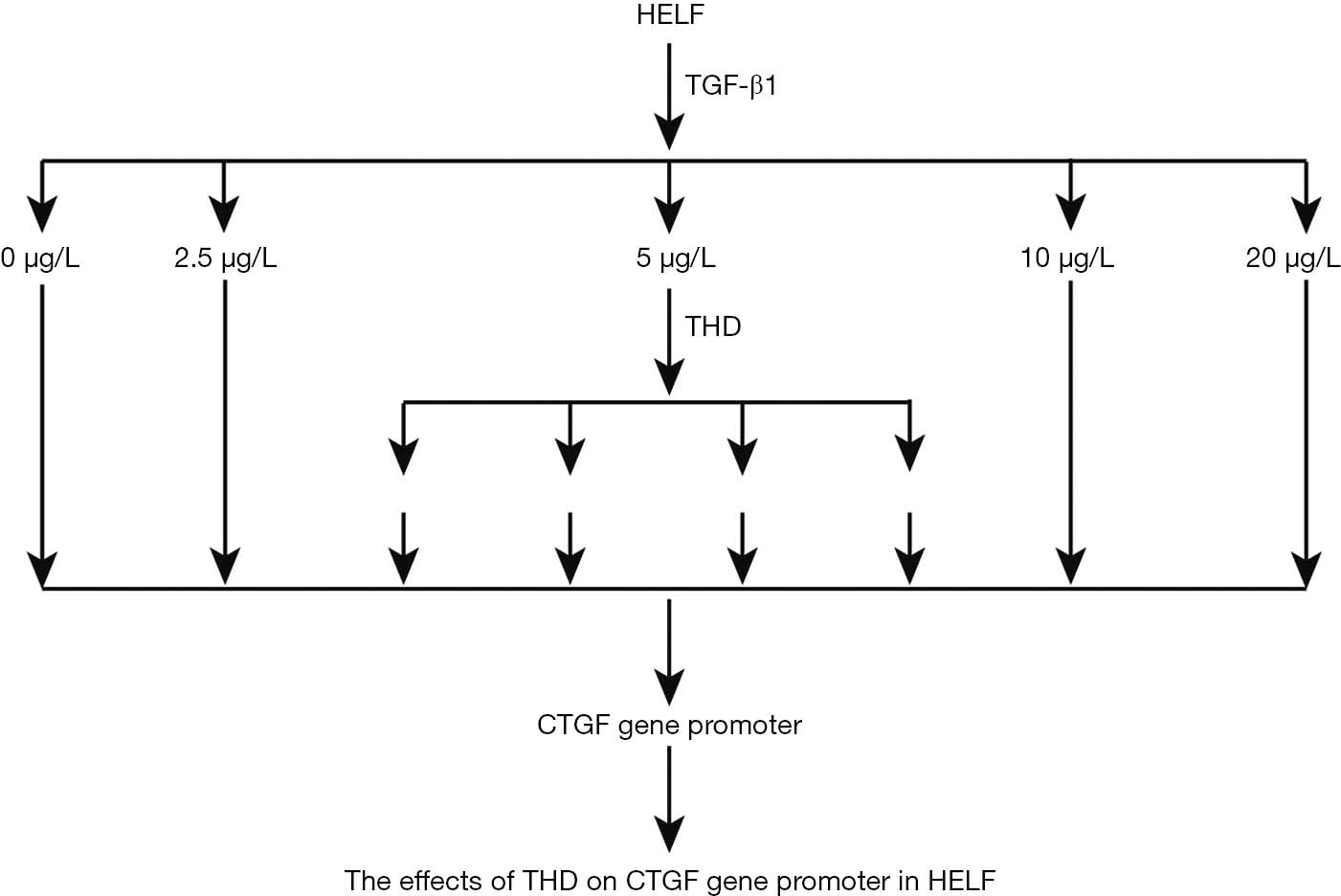 The culture of HELF

The HELF cells were provided by the Cell Center of Chinese Academy of Medical Sciences. The obtained HELF cells were inoculated into a 150 mm culture dish containing 10% calf serum and DMEM medium. and the cells were cultured in 5% CO2, 37 °C until the degree of cell fusion is about 70%, then we used DMEM medium containing no calf serum to culture for 24 h, and then further drug treatment were made.

When the HELFs were prepared, the recombinant plasmid pGL3-CTGFP was transfected into the cultured HELF cells with liposome, and the pRL-SV40 plasmid containing Renilla luciferase was transfected as an internal reference. After 24 h of culture, TGF-β1 with concentration of 0, 2.5, 5, 10 and 20 µg/L was added respectively in the experiments of Part one. Or with 5 µg/L TGF-β1 adding, further THALIDOMIDEs with concentrations of 0, 25, 50 and 100 µg/L were added in the experiments of part two.

According to human CTGF gene promoter sequence (GenBank, AF316368), primers were synthesized by professional gene-editing company (Hengsheng, Shanghai), the upstream primers were 5'-GCCAGATCTTCCCTTTTTCTGGAAACATTGATGG-3' (Bgl II), and the downstream primers were 5'-CTGAAGCTTCTGACAGGGCGAGGAGGAGGAC-3' (Hind III). The human CTGF gene promoter fragment was obtained by PCR amplification using normal human peripheral blood leukocyte cDNA was selected as template. The length of the PCR product was 1,026 bp. The reaction conditions were: pre-denaturation at 94 °C for 2 min, 94 °C for 30 s, 60 °C for 30 s, 68 °C 1 min, a total of 35 cycles. The vector pGL3-Basic was digested with restriction endonucleases BglII and HindIII, and the PCR target fragment was ligated into the restriction vector with T4 ligase to construct the pGL3-CTGFP recombinant plasmid. The recombinant plasmid was then sent to senior gene company (Hua Da Gene, China) for verification.

Detection on the expression of CTGF gene promoter

Hematoxylin and eosin (HE) staining

We used HE staining to detect how cells survive. HE staining was conducted as previously described (14). The specimens were examined and photographed by a light microscope (Olympus OX 90) at 40× and 100× field of view.

Data were analyzed using SPSS 11. 0 statistical software. The continuous variables are presented as mean and standard deviation. Comparisons between groups were performed by one-way analysis of variance (ANOVA), and the Bonferroni method was used for inter-group comparison. P<0.05 was considered that the difference was statistically significant.

The culture of HELF

The morphology of fibroblasts was observed under inverted micro-scope. It was indicated that the HELF was successfully cultured (Figure 2A,B), and further verified by HE staining (Figure 2C,D). 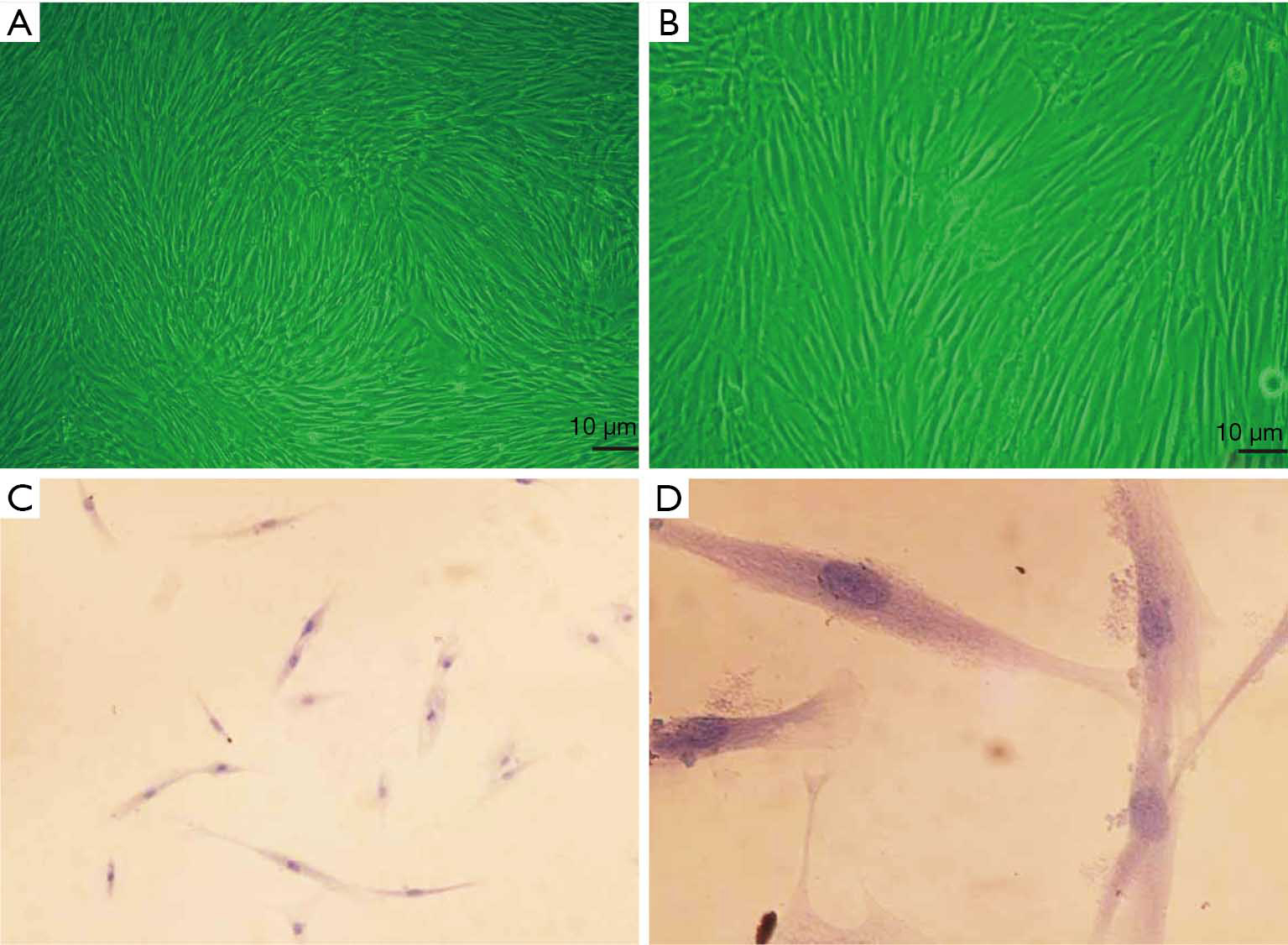 The PCR amplification product of CTGFP-biotin probe showed a clear band at 1,000 bp (1,026 bp) after electrophoresis on 1% agarose gel, which was consistent with the expected size of the amplified fragment, indicating that CTGFP-biotin probe was successfully amplified, as shown in Figure 3. 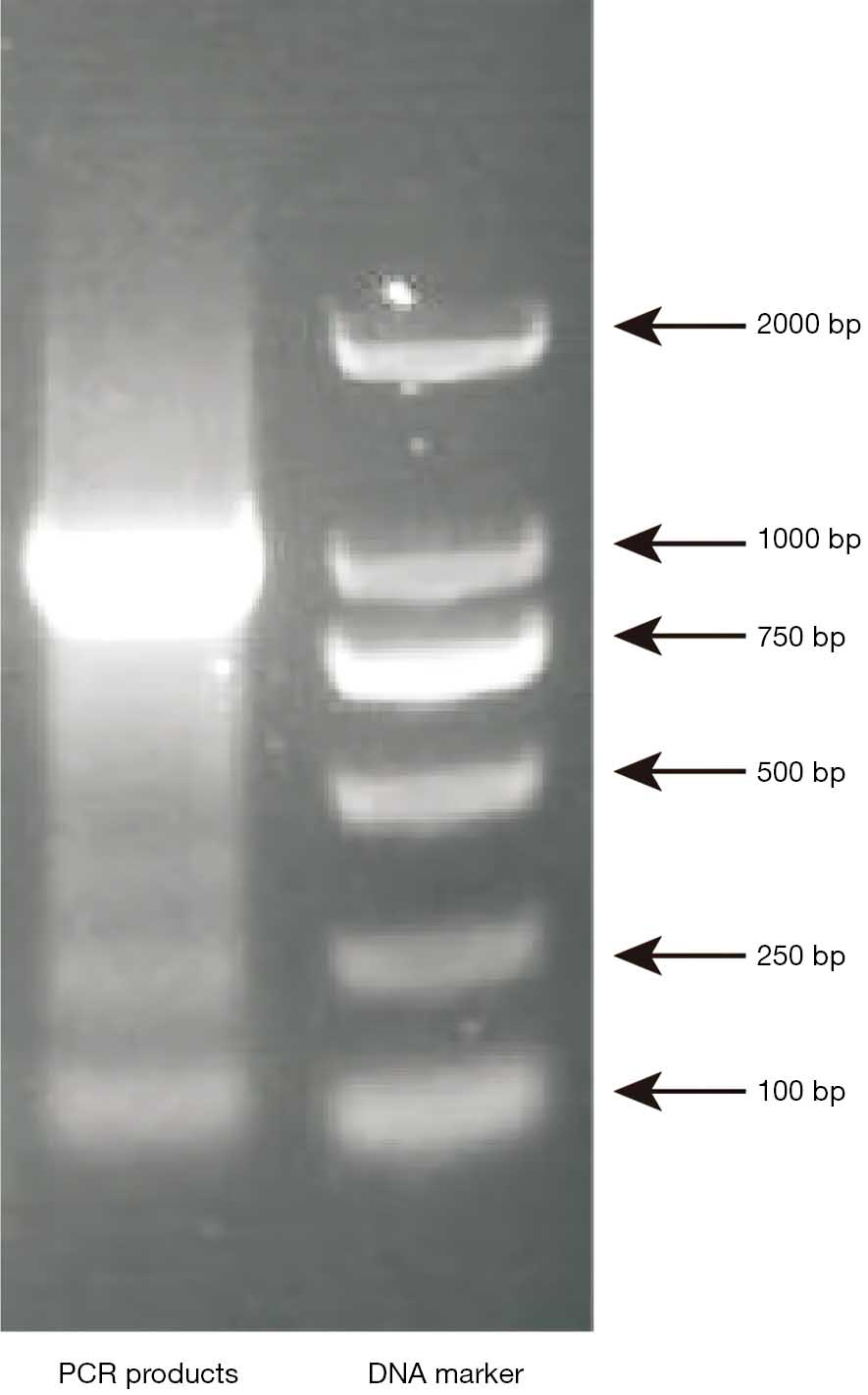 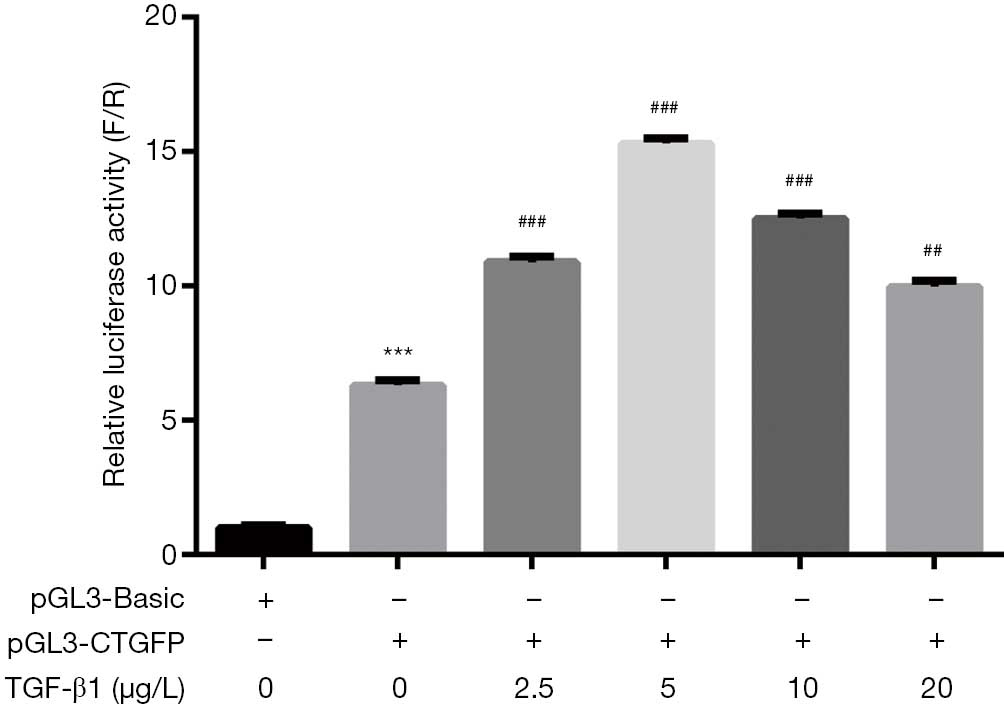 As Figure 5 showed, the thalidomide produced a significantly inhibited effect on the TGF-β1-induced activation of CTGF gene promoter in HELF, and the effect peaked in the 25 µg/L group. 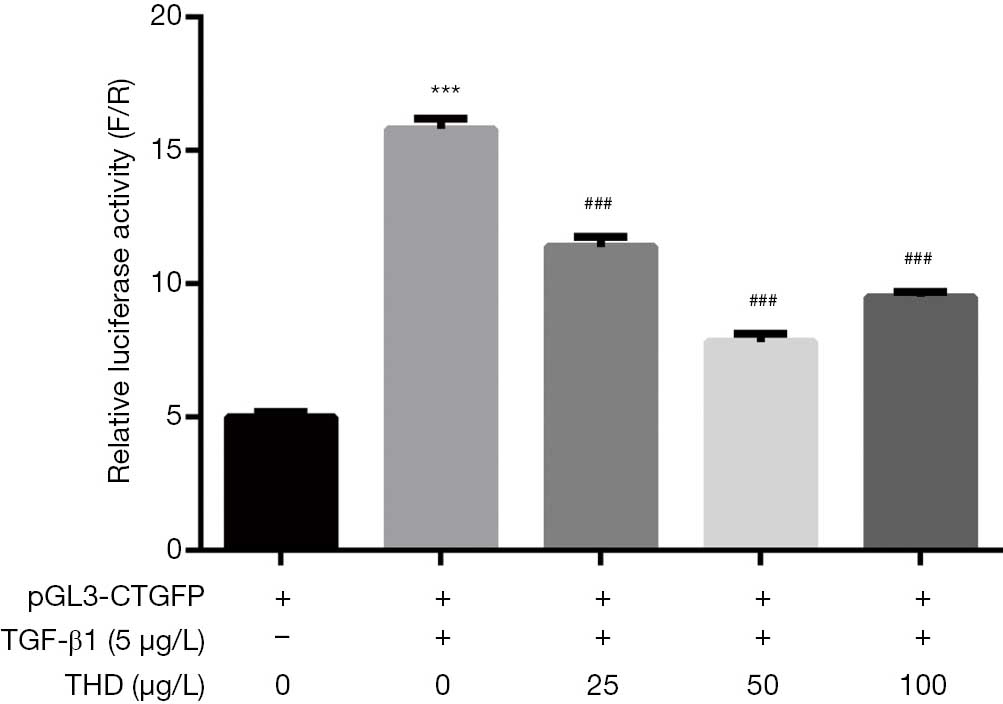 CTGF is a cysteine-rich, secreted polypeptide, which is widely found in many tissues and organs such as human heart, lung, liver, kidney etc. (15,16). It’s been reported that CTGF is mitogenic, it can stimulate the cell migration, cell adhesion, and it promotes the cell phenotypic transformation and fibroblast proliferation, by which promoting the biological process of angiogenesis (17-19). The over-expressed CTGF is closely related to the pathogenesis of organ fibrosis such as pulmonary fibrosis, cirrhosis, and diabetic nephropathy (20,21). Previous study has found that CTGF mRNA and protein expression are up-regulated in the alveolar lavage fluid and fibrotic lung tissue in patients with IPF (22). Meanwhile, in situ hybridization and immunohistochemistry have observed up-regulation of CTGF mRNA and protein expression in lung tissue of patients with IPF, and it’s positively correlated with the expression level of fibronectin (23). CTGF is involved in the transformation of lung fibroblasts into myofibroblasts, and myofibroblasts are the main source of collagen fibers in the IPF (24,25). Furthermore, it’s been reported that CTGF-siRNA can inhibit the proliferation, phenotypic transformation and extracellular matrix synthesis of lung fibroblasts (26).

It’s been found that TGF-β1 is one of the most important fibrotic factors in organ fibrosis and is overexpressed in liver, lung, kidney and other organ fibrosis models (27,28). Previous studies have shown that CTGF is an important downstream factor mediating TGF-β1 profibrosis (29-31). In vitro cell culture experiments have showed that lung fibroblasts can not only express CTGF, but also induce a significant increase in CTGF expression when TGF-β1 is added to the culture medium. There is a TGF-β response element at the CTGF promoter-157 to -145, and the mutations in this region can abolish the induction of TGF-β1 to CTGF (29). Therefore, the antisense CTGF technology can potentially block the profibrotic effects caused by TGF-β1 (32). However, the TGF-β1 plays a double-sided act, which not only plays a positive role in inhibiting inflammation and excessive cell proliferation, but it also can cause negative effects such as tissue organ fibrosis (33). It’s been reported that the mice that have knocked out the TGF-β1 gene died of systemic inflammation soon after birth because of the loss of inhibition of inflammation (34), This limits the use of therapeutic strategies that antagonize TGF-β1 as a treatment target. The expression of CTGF is low and it’s mainly expressed in the stroma cell, the effect is also limited to connective tissue, antagonizes CTGF without adverse clinical response may occur after blocking TGF-β1 (35). Therefore, the anti-fibrotic effects can be achieved by blocking CTGF and it may be potentially more specific and safer than TGF-β1.

Several published studies (36-39) have shown that thalidomide has a certain therapeutic effect on liver, kidney, lung and other organ fibrosis. Previous study has found that thalidomide can increase the overall clinical treatment efficiency, reduce the lesion region in the chest CT and improved the lung function in elderly patients with pulmonary fibrosis (40). Besides, it’s been reported that thalidomide can reduce the expression of IL-18 and TNF-α in the alveolar lavage fluid in patients with IPF (41). It can be seen that thalidomide potential provides a good anti-pulmonary fibrosis effect (42,43). However, the underlying mechanism remains unclear. To further understand the anti-fibrotic mechanism of thalidomide, this present study used the luciferase reporter gene system to observe the effect of thalidomide on the activity of the CTGF gene promoter. In this experimental study, we have constructed the CTGF promoter-driven luciferase reporter vector pGL3-CTGFP and have transfected it into HELF as a test for the effect of thalidomide on CTGF gene promoter activity. The results showed thalidomide could significantly inhibit the gene promoter of CTGF in HELF.

Several limitations in this present study must be considered. Firstly, due to budget limitation, we only used the luciferase reporter gene system to observe the effect of thalidomide on the activity of the CTGF gene promoter, no other experiments were performed. Secondly, we only detect the effects of thalidomide con gene promoter of CTGF in vitro but not in vivo, further investigations in vivo are highlighted in future studies. Thirdly, we only identified the potential relationship among thalidomide, CTGF and TGF-β1, the underlying mechanisms remain unclear, which warrant further investigations.

In conclusion, this present study has found that thalidomide produces a significant inhibitory effect on the activation of CTGF promoter induced by TGF-β1, and this effect may be closely associated with the anti-fibrosis effect of thalidomide. This finding of thalidomide could significantly inhibit the gene promoter of CTGF in HELF may provide new insights into the treatment of anti-pulmonary fibrosis. However, the underlying mechanisms for the role of thalidomide on pulmonary fibrosis warrant further investigation in the future.

Conflicts of Interest: All authors have completed the ICMJE uniform disclosure form (available at http://dx.doi.org/10.21037/apm-19-398). The authors have no conflicts of interest to declare.

Ethical Statement: The authors are accountable for all aspects of the work in ensuring that questions related to the accuracy or integrity of any part of the work are appropriately investigated and resolved. This present study obtained ethics approval from the ethics committee of our hospital (2018-1029-c1) and was conducted in accordance with the Declaration of Helsinki (as revised in 2013).