Tracheobronchomalacia (TBM) refers to the softness of trachea and bronchus which may or may not lead to dynamic airflow limitation. Severe TBM is often a life-threatening condition requiring more aggressive management. The mainstay of therapy for severe TBM was tracheostomy and long-term mechanical ventilation (MV). Internal tracheal stent placement with a silicone prosthesis was first attempted in 1965 by Montgomery (1). Stent placement in patients with TBM is attracting more attention. We haven’t found any case of TBM caused by hydrochloric acid inhalation. Here, we present a rare case of patient with TBM who first presented with dyspnea due to hydrochloric inspiration. And we tried a special therapeutic method with multiple stents insertion. Moreover, the case gains better outcomes in a long follow-up. The details of this case are as follows. We present the following case in accordance with the CARE reporting checklist (available at http://dx.doi.org/10.21037/apm-19-216).

A 45-year-old female presented with dyspnea for 7 weeks and aggravating for 4 days. Seven weeks beforehand, she experienced dyspnea after falling into a hydrochloric acid pool (concentration, 20%) for 1 minute (Figure 1). She had no special past medical history. Family history was unremarkable. In local hospital, arterial blood gas (ABG) analysis revealed respiratory failure type I. Tracheotomy and MV were promoted subsequently. Bronchoscopy revealed many pseudomembranes and sporadic mucosal erosion.

Seven weeks later, she was transferred to our hospital. When she was treated with MV (oxygen concentration, 100%), the airway pressure increased and oxygen saturation decreased. ABG analysis results were: pH 7.107, PCO2 112.6 and PO2 162 mmHg. An emergent respiratory interventional therapy was performed. Bronchoscopy evidenced obvious subtotal stenosis (about 80%) in the middle and upper parts of trachea. The airway stenosis was considered to be caused by the softness of trachea and bronchus. Therapeutic measures contained laryngeal mask ventilation, balloon dilatation and provisional Ultraflex covered stent placement (Figure 1). She was referred for tracheal extubation in 2 days after surgery. 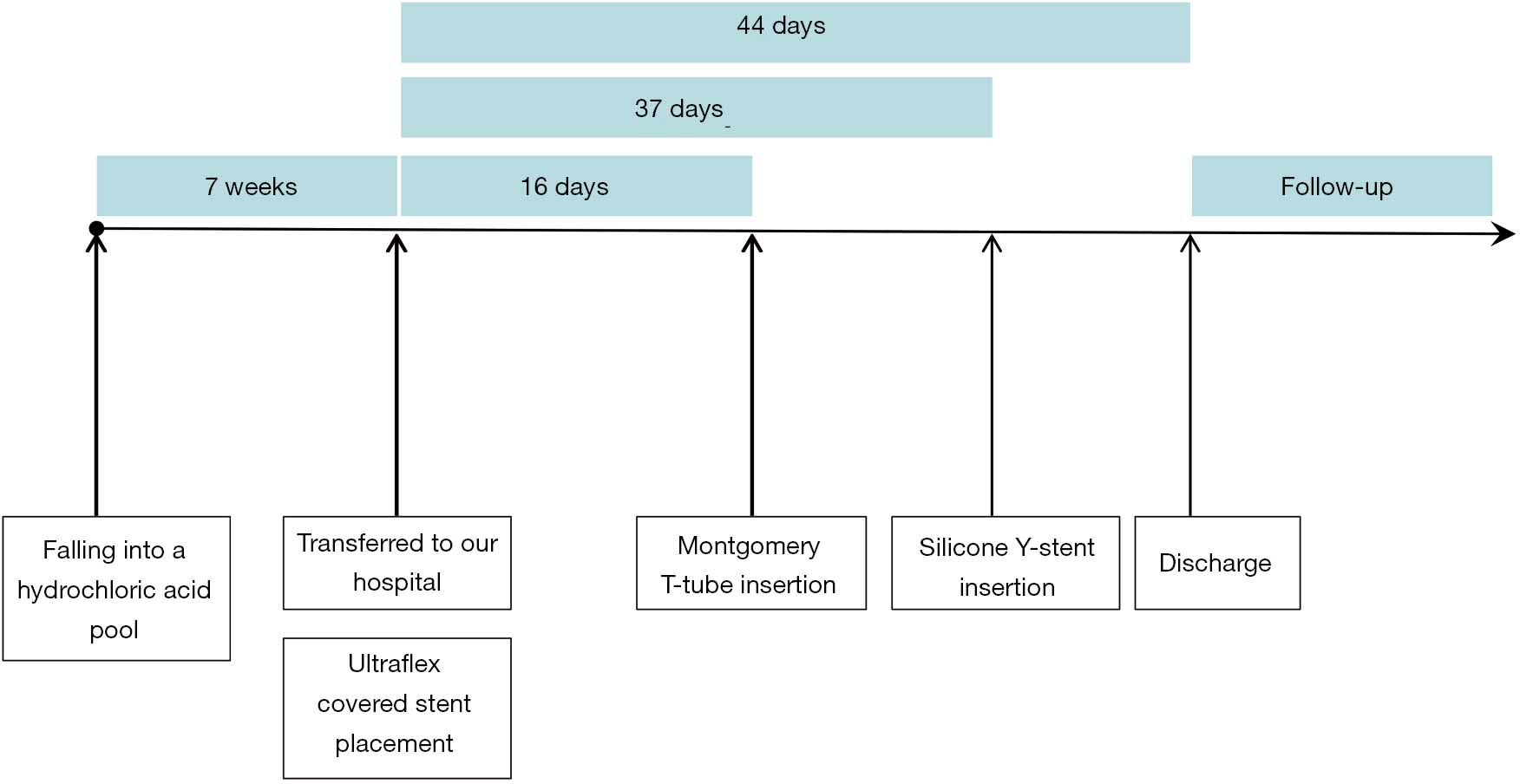 On the 16th day of admission, bronchoscopy revealed that the Ultraflex stent was in position but obviously narrowed during expiration, with obviously collapsed subglottic primary bronchi (Annex 1). The functional Ultraflex stent should not be removed. And a Montgomery T-tube was inserted urgently (Figure 1).

On the 32nd day of admission, a chest computed tomography (CT) and three-dimensional structure reconstruction of trachea showed evident TBM and stenosis in the lower margin of Ultraflex stent. The narrowest lumen diameter was only 2–3 mm. On the 37th day of admission, a silicone Y-stent was implanted (Figure 1). The symptoms remitted obviously. Chest CT revealed significant improvement in tracheal stenosis (Figure 2). 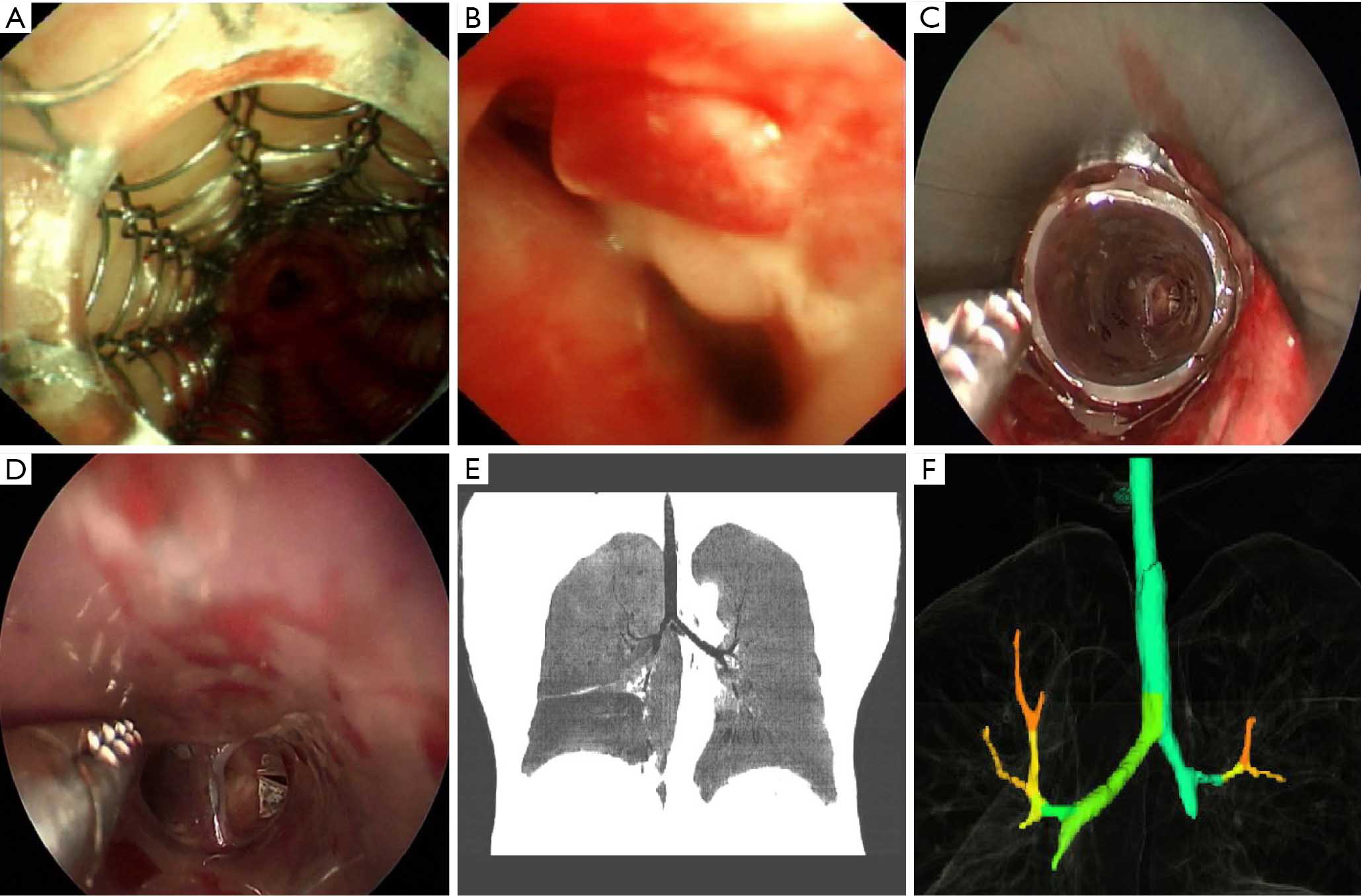 She was discharged 44 days after the hospitalization with improved breathlessness (score 2 on the modified Borg scale) (Figure 1). Medical orders included atomization treatment, backslapping to help sputum excretion and airway management.

All procedures performed in studies involving human participants were in accordance with the ethical standards of the institutional and/or national research committee(s) and with the Helsinki Declaration (as revised in 2013). Written informed consent was obtained from the patient for publication of this case report and any accompanying images.

Airway stents have been applied in management of tracheobronchial pathologies since the second half of the 20th century (3). Common complications included restenosis, stent migration and bad breath. Granuloma formation accounted for 5–44% of the magnitude of airway restenosis (4).

In this report, the patient developed TBM because of the inhalation of hydrochloric acid. Bronchoscopy indicated the diagnosis of TBM, which revealed tracheal collapse and airway stenosis for more than 80%. The pathogenesis of the patient is believed to be a comprehensive consequence of inflammation and tracheal wall structure changes. The current main management of such severe airway collapse is insertion of airway stents (4). The inhibition of bronchial mucociliary clearance is a common problem associated with stents, which related to bad breath. In this case, the airway malacia appeared and aggravated gradually, stents insertion can relieve dyspnea and correct respiratory failure rapidly. Moreover, granulation was the main complication observed in 15-month follow-up. The supporting function of airway cartilage need to be evaluated, which relating to the removal of airway stents. Considering of long-term complications, we expected to remove the stents in the future.

The presence of TBM or airway collapse should be considered at the onset of dyspnea in patients who unexpectedly breathed in corrosive chemicals. Subsequent close follow-up and tracheal stent insertion is required for achieving the best outcome.

Funding: This work was supported by the National Natural Science Foundation of China (grant number 81770009).

Reporting Checklist: The authors have completed the CARE reporting checklist. Available at http://dx.doi.org/10.21037/apm-19-216

Conflicts of Interest: All authors have completed the ICMJE uniform disclosure form (available at http://dx.doi.org/10.21037/apm-19-216). The authors have no conflicts of interest to declare.

Ethical Statement: The authors are accountable for all aspects of the work in ensuring that questions related to the accuracy or integrity of any part of the work are appropriately investigated and resolved. All procedures performed in studies involving human participants were in accordance with the ethical standards of the institutional and/or national research committee(s) and with the Helsinki Declaration (as revised in 2013). Written informed consent was obtained from the patient for publication of this case report and any accompanying images.