Hypertension is one of the most common chronic diseases in worldwide (1). In China, 23.2% (approximately 244.5 million) of the adult population has hypertension (2). Elevated blood pressure can lead to numerous target organs damage and related complications such as heart failure, stroke, chronic kidney disease, and death (3). Meanwhile, atrial fibrillation (AF) as a common complication of hypertension (4), which can cause cardiovascular events such as stroke (5,6). The estimated number of individuals with AF in the world was 33.5 million in 2010 (7). In a large cohort prospective study that included 34,221 initially healthy women. After 12.4 years of follow up, 644 incident of AF events occurred and demonstrated blood pressure (BP) was strongly associated with a higher risk of AF (8). Similar result was found in another study with 35 years of follow-up that included 2014 initially healthy men, systolic BP ≥140 mmHg had 1.6-fold (95% CI: 1.15–2.21) risk of AF compared with those with systolic BP <128 mmHg (9).

However, the mechanism of AF remains unclear now. A large number of previous studies have shown that AF was a multifactorial disease, and demonstrated that gender, race, obesity, and high density lipoprotein cholesterol (HDL-C) were all closely related to AF (4,10-12). Previous studies also manifested AF was closely associated with inflammatory response and oxidative stress (13-15). Low-density-lipoprotein cholesterol (LDL-C) was also reported to be related to inflammatory and oxidative stress (16,17). Meanwhile, several studies have identified that LDL-C had negative association with AF (18,19), and some identified null association. (20).

In brief, the epidemiological evidence on the association between LDL-C and the risk of AF is still inconsistent (18-21), especially among people with hypertension. Therefore, we investigated the relationship between LDL-C and AF in a group of hypertensive patients in China. We present the following article in accordance with the STROBE reporting checklist (available at http://dx.doi.org/10.21037/apm-20-451).

This was a cross-sectional study in one Chinese community. The population cohort comprised of 8,169 hypertensive patients aged ≥18 years old, who were attending annual physical examinations in the community health care center in Liaobu, Guangdong, China. Participants were consecutively enrolled during January 2013 and December 2013. All enrolled participants were diagnosed with essential hypertension and had complete sets of data. The participants who were did not provide data of BP (n=38), blood lipid (n=245), serum creatinine (n=255), demographic features (n=45), or data of electrocardiograph (ECG) (n=71) were excluded (Figure 1). Finally, 7,808 subjects were included in the data analysis. The study was in compliance with the principles outlined in the Declaration of Helsinki (as revised in 2013) and was approved by the institutional medical ethical committee (NO. GDREC2012143H). Written informed consent was obtained from all participants. 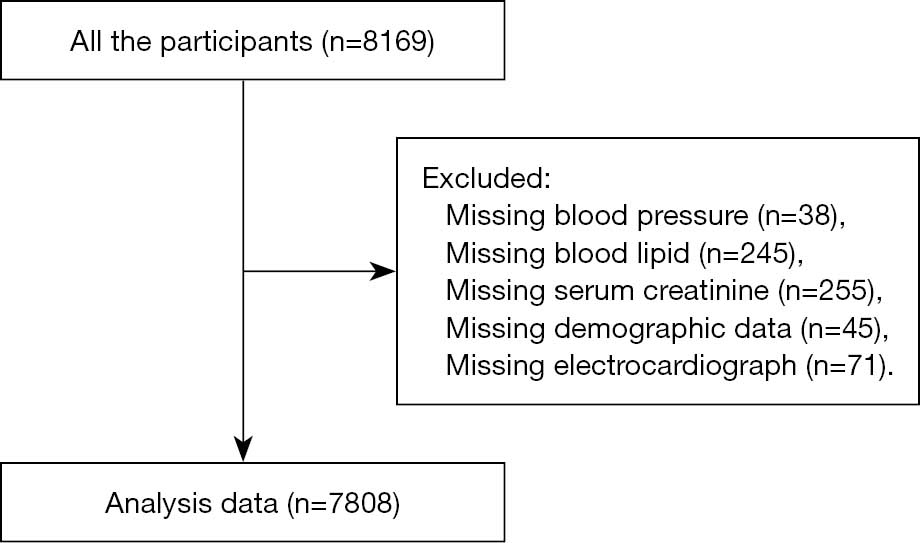 Figure 1 The flowchart of selecting participants for analysis.

At baseline, a structured questionnaire was administered by trained study personnel to acquire demographic characteristics, including demographic data, medical history [beta-blockers, calcium channel blockers (CCB), angiotensin-converting enzyme inhibitors (ACEI)/angiotensin-receptor blockers (ARB), statins), and medical history (coronary heart disease (CAD), diabetes mellitus (DM), stroke]. Parameters for physical measurements included systolic BP (SBP), diastolic BP (DBP), and body mass index (BMI). Blood samples were collected after at least 8 hours of fasting. Fasting blood glucose (FBG), total cholesterol (TC), triglyceride (TG), LDL-C, HDL-C was measured using standardized laboratory methods. Hypertension was defined as SBP ≥140 mmHg, and/or DBP ≥90 mmHg, and/or the use of antihypertensive medicine within 2 weeks, with reference to 2010 Chinese guidelines for the management of hypertension (2). ECG was standard resting 12-lead recordings at a paper speed of 50 mm/s and a calibration of 1 mV per 10 mm and were collected from all subjects at the baseline. Participants were considered to have AF if AF rhythm have been captured in ECG. AF rhythm was defined as (I) irregular R-R intervals, (II) absence of distinct repeating P waves, (III) irregular atrial activity show on ECG, according to 2014 ACC/AHA/HRS Guideline for the Management of Patients With Atrial Fibrillation (4). Left ventricular hypertrophy (LVH) was defined as Cornell criteria (S-wave in V3 and R-wave in aVL >24 mm in men, and S in V3 and R in aVL >20 mm in women) and the Sokolow-Lyon criteria (tallest R wave in V5 or V6 and S-wave in V1 >35 mm) with or without concomitant strain pattern (T-wave inversion in lateral leads) (22). All ECG results were identified and diagnosed by qualified practitioners. Estimated glomerular filtration rate (eGFR) was calculated from the simplified MDRD equation (23).

Continuous variables were expressed as means ± standard deviations, while categorical variables were presented as absolute values and percentages. One-way ANOVA, Kruskal-Wallis H test and chi-square test were performed to determine any significant subgroup differences According to LDL-C levels in quartile (Q1, Q2, Q3, Q4). Univariate and multivariate logistic regression were performed to evaluate the association between LDL-C and AF, and the results were reported as odds ratio (OR) with 95% confidence intervals (CI). LDL-C values were treated as both continuous (every 1 mg/dL increment) or categorical variables in different regression models. Model 1 only included LDL-C values. Model 2 was adjusted for age, sex and SBP. Meanwhile, Model 3 was adjusted for age, eGFR, sex, diabetes, CAD, SBP, smoking, drinking, FBG, TC, TG, LDL-C, HDL-C, antihypertensive drugs and statin. To visualize the relationship between LDL-C and AF, we fitted restricted cubic spine by adjusting for potential confounders. A two-tailed P value less than 0.05 was considered as significant. Data management and analyses were performed using the statistical software package R version 3.32 (http://www.R-project.org, The R Foundation, Vienna, Austria).

Baseline characteristics for participants were summarized in Table 1. The present analysis included 7,808 participants, including 3,678 men (47.1%). The average age was 62.3±13.7 years. A total of 78 AF cases were identified, including 42 men (53.8%) and average age were 72.3±11.3 years. Participants with AF were older, had higher prevalence of CAD and had lower levels of LDL-C, TG and TC compared to those without AF (all P<0.05). The statin usage was significantly higher in AF group than in non-AF group. 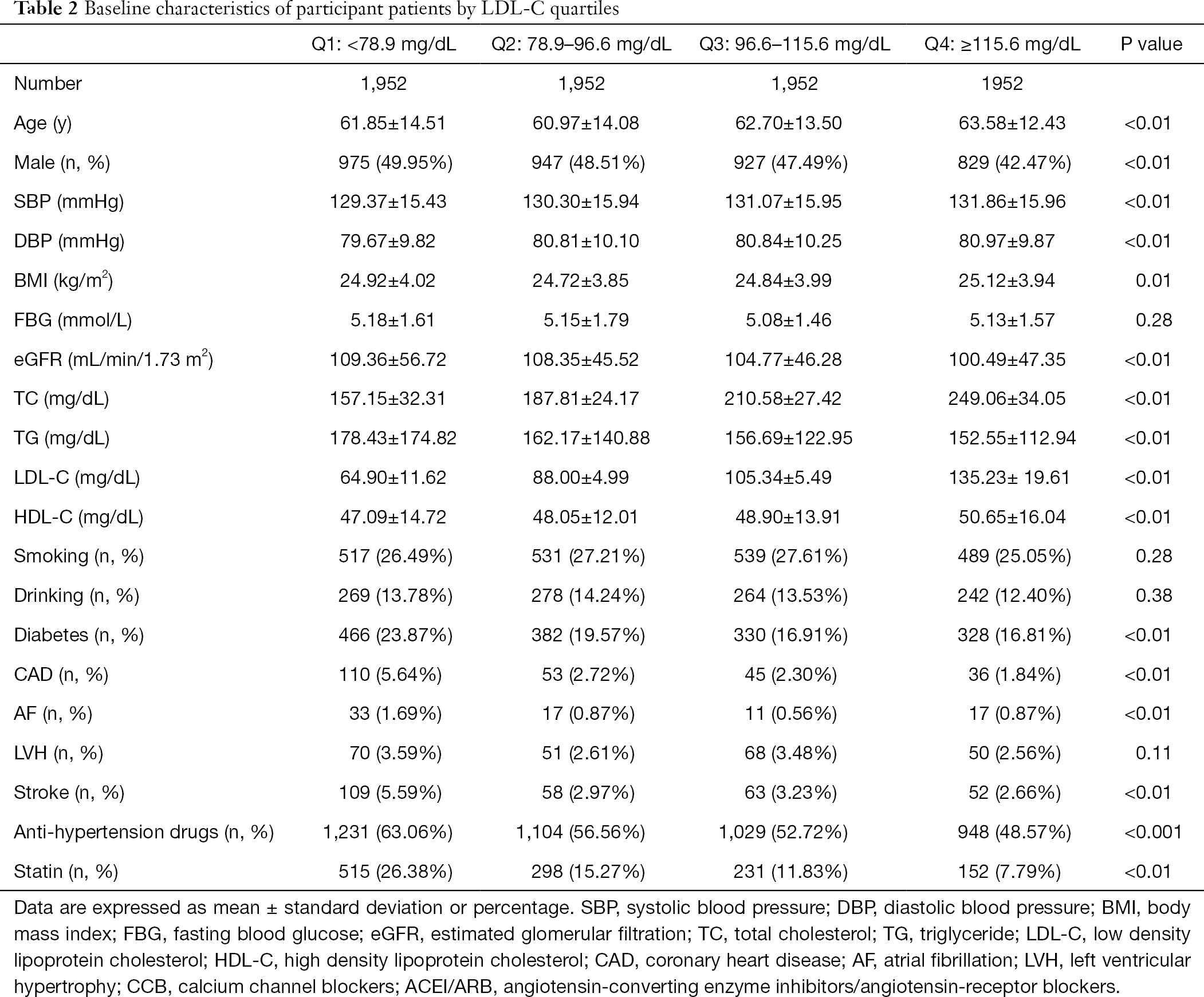 The association between LDL-C and AF 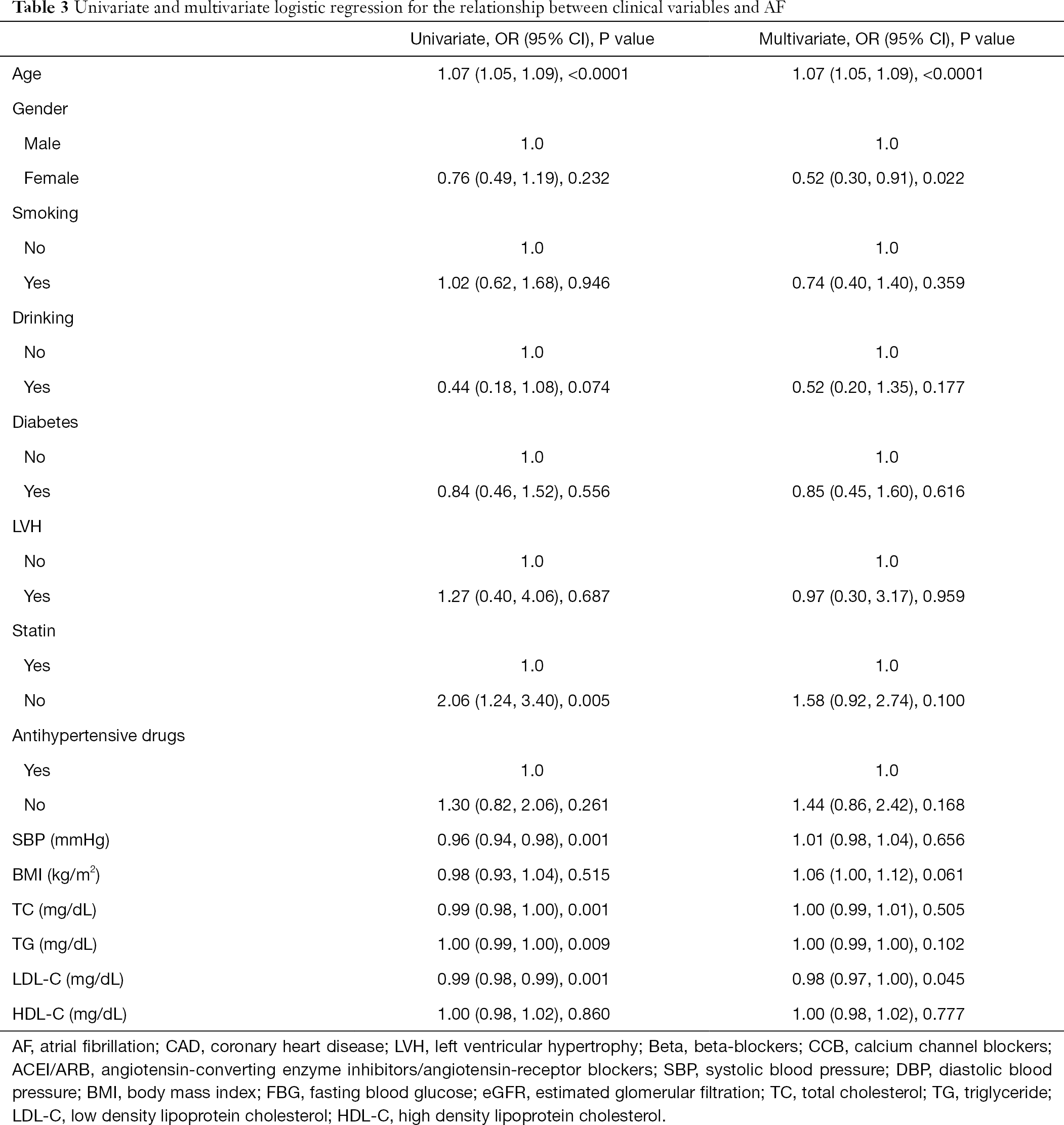 The non-linear relationship between LDL-C and AF 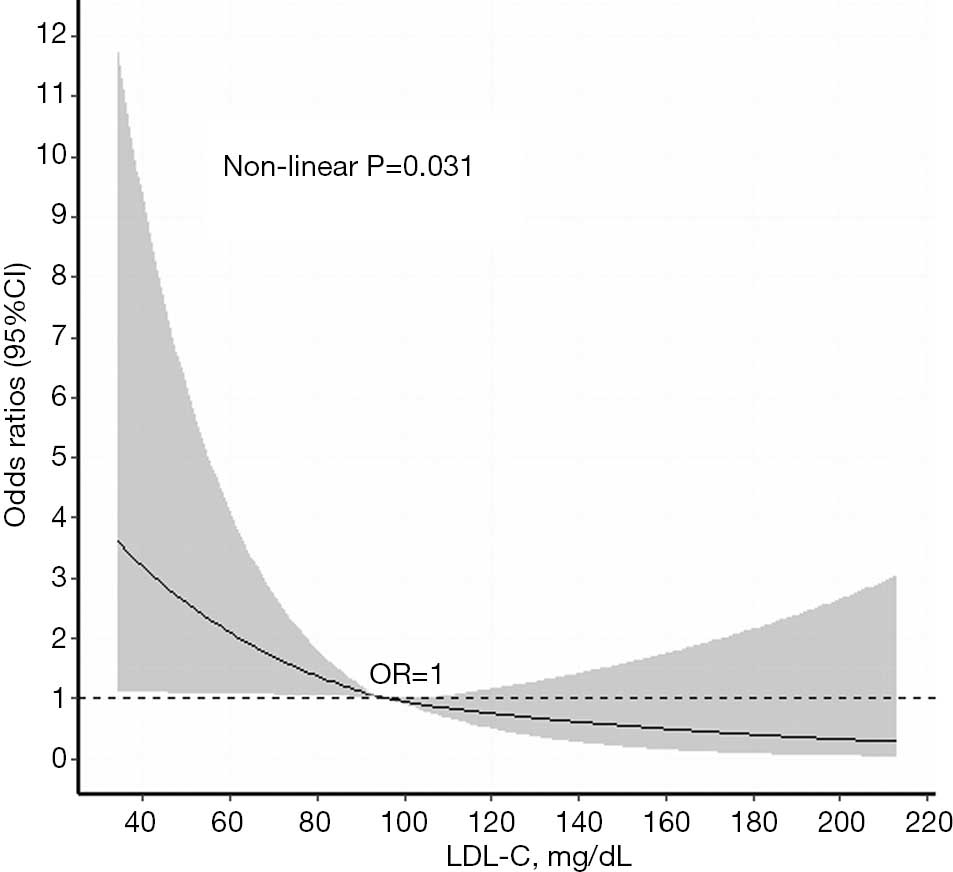 In the present study, we found that LDL-C was inversely associated with AF. Interestingly, when LDL-C was presented as categorical variables, the negative association between LDL-C and AF was attenuated.

It has been demonstrated in a secondary analysis of the Antihypertensive and Lipid-Lowering Treatment to Prevent Heart Attack Trial (ALLHAT) which included 14,837 participants. They found that LDL-C was lower in the participants with AF/atrial flutter (AFL) group than the group without AF/AFL (P<0.001) (24). Our results also indicted that AF patients have lower LDL-C compared to patients without AF. Although AFL was not measured in the present study, the results are still consistent because the prevalence of AFL is much lower than that of AF (25).

Although the exact mechanisms between LDL-C and AF remains unresolved, several mechanisms may help to explain the inverse association. First, some researchers considered that high levels of LDL-C might have an anti-inflammatory effect (27,28), and AF was closely associated with inflammatory reaction (15). Low level of LDL-C probably contributes to the pathogenesis of AF via enhancing inflammatory response. Second, membrane lipid composition is the main determinant of cell excitability, previous vitro studies have identified that cholesterol regulates the function of ion channels, such as Kv1.5 K+ channel, Na+ channel in myocardial cell. Lowered cholesterol levels reduce cell excitability which might be potentially contributing to the development of AF (29,30). Third, subclinical hyperthyroidism decreases LDL-C (31) and is also associated with increased risk of AF (32). In addition, a latest article purposed the concept of cardiac lipotoxicity in which heart tissue uptake increased lipoproteins, therefore the circulatory lipids may be reduced. The imbalance of lipids distribution among tissue and circulation may be another explanation for the paradoxical relation between LDL-C and AF (33).

Some limitations should be considered when interpreting our findings. First, this was a cross-sectional study, which indicate correlation but not causation. Second, in the present study, AF was diagnosed by ECG at the baseline but not by the 24 hours ECG, which might miss out paroxysmal or subclinical AF and lead to the relatively low incidence of AF. Third, we did not examine the levels of inflammatory biomarkers, and did not performed tests on thyroid function, heart function, and did not obtain the data of central obesity. Forth, despite the adjustment of multiple confounders, effects of residual confounders may exist, such as the impact of uric acid and sleep. Finally, this was a single center study, therefore the conclusions could not be directly extrapolated to other populations.

In conclusion, we found that lower levels of LDL-C were associated with increased incidence of AF in a Chinese community hypertensive population. However, when LDL-C was presented as categorical variables, after adjusted potential confounders, the negative association between LDL-C and AF was attenuated.

Reporting Checklist: The authors have completed the STROBE reporting checklist. Available at http://dx.doi.org/10.21037/apm-20-451

Conflicts of Interest: All authors have completed the ICMJE uniform disclosure form (available at http://dx.doi.org/10.21037/apm-20-451). The authors report grants from Science and Technology Program of Guangzhou, grants from National Key Research and Development Program of China, grants from Key Area R&D Program of Guangdong Province, during the conduct of the study.

Ethical Statement: The authors are accountable for all aspects of the work in ensuring that questions related to the accuracy or integrity of any part of the work are appropriately investigated and resolved. The research was performed according to the Declaration of Helsinki (as revised in 2013) and the guidelines of the local ethics committee (Guangdong Provincial People’s Hospital, NO. GDREC2012143H). All patients have provided written consent.