According to GLOBOCAN, there are 2.1 million new lung cancer cases worldwide, accounting for 11.6% of all new cancer cases. The incidence of lung cancer ranks first among all cancers in most countries (1). Nowadays, surgical treatment is still the primary method for early stage lung cancer (2), but many patients are too late to have chance of surgery (3,4). Chemotherapy plays an important role in treatment, but the side effects were high (5). Only some specific populations could get benefits from targeted therapy or immunotherapy (6,7). With the improvement of modern medical technology, the thermal ablation has offered another treatment choice. Microwave ablation is a minimally invasive therapeutic approach, which is more and more widely used in lung cancer, primary liver cancer and other solid tumor and has good therapeutic outcomes (8-11). It could be performed in some medical institutions or even by outpatient surgery, with almost no absolute contraindications except for uncorrectable coagulation dysfunction, thrombocytopenia or the tumor adjacent to an important anatomical structure (12). Hence, microwave ablation was worth exploring its application further. In this paper, we analyzed the effect and safety of CT guided microwave ablation in 45 lung cancer patients.

We retrospectively enrolled 45 CT guided microwave ablation of lung cancer patients in Shanghai Pulmonary Hospital from March 2016 to September 2019. Approval of this study was obtained from Shanghai Pulmonary Hospital Ethical Inspection Committee (ethical number 18Q016NJ). This study was conducted in accordance with the Declaration of Helsinki (as revised in 2013). Written informed consent was obtained from the patient for publication of this manuscript and any accompanying images. All patients’ malignancies were considered medically inoperable or patients refused surgery. Patient characteristics were shown in Table 1. The patients included 26 males (57.8%) and 19 females (42.2%), with the median age of 68. Almost all pathological types and stages were involved. There were 25 (55.6%) adenocarcinoma, 10 (22.2%) squamous carcinoma and 3 (6.7%) small cell lung cancer and 7 (1.6%) non-small cell lung cancer-not otherwise specified (NSCLC-NOS). And as for pathological stage, there were 13 (28.9%) cases of stage I, 2 (4.4%) cases of stage II, 5 (11.1%) cases of stage III, 16 (35.6%) cases of stage IV and 9 (20.0%) unknown stage.

Siemens 64 slice spiral CT machines were used. The microwave ablation system was consisted of generator and microwave antenna. The microwave generator (Spherical Water-cooled Microwave Ablation System; Vision Medical USA Inc.) that was used was capable of producing up to 40–60 W of power. We used a 17-gauge monopolar cooled microwave needle. The length of the range was from 0 to 15 cm (depending on the depth of the lesion treatment) and the non-insulated portion of the needle was between 1 to 3 cm. Preoperative interview and preoperative examination were conducted. Before the operation, we asked patients to breathe smoothly. Then we scanned tumor position by CT and decided the needle direction and angle. Under local anesthesia, the puncture needle was slowly inserted into the center of the tumor. Finally, it was connected to an emitter. The specific time of microwave ablation was determined according to the lesion sizes of the patients. For patients with larger lesions, multiple sites were applied for superposition ablation. If the diameter of the tumor was less than 3 cm, the insertion point could be inserted into the center of the tumor nodules, and then microwave ablation could be performed. And if larger than 3 cm in diameter, the shape of tumor nodules was generally irregular, in this case the position of the tip could be adjusted gradually until the whole tumor nodules were removed by microwave ablation. After the ablation, the needles way was ablated to prevent needle implantation. After the completion of treatment, CT scan was performed again to observe the pneumothorax, bleeding and other complications. Then the patient was taken to return to the ward and laid for 2 hours. Chest X-ray was reexamined 1 week after surgery and CT scan was performed one month later.

Statistical analysis was processed by SPSS 25.0. Numerical data were expressed in terms of case number and constituent ratio. The size of tumor before and after microwave ablation was statistically analyzed by paired-samples T-test. And the possible influencing factors of efficacy and complications were analyzed by one-way analysis of variance. P<0.05 indicated that the difference was statistically significant.

All the 45 patients with lung cancer were successfully completed microwave ablation. The tumor diameter changed from 2.35±0.22 cm before surgery to 2.26±0.19 cm 1 month after surgery, average reduction by 0.09 cm (P=0.518). The tumor reduction and the rate showed in Figure 1 (four patients were excluded for efficacy analysis due to loss of follow-up, and only their complication rates were analyzed). With microwave ablation treatment, the disease control rate was 82.93%, which was calculated by complete response (CR) plus partial response (PR) plus stable disease (SD). Four patients were re-examined 1 month after microwave ablation and found cavitation in the original tumor site (Figure 2). There was no intraoperative death or severe adverse cases. Postoperative complications included pneumothorax (n=9, 13.3%), no pleural effusion, fever, hemorrhage, hemoptysis and pneumonic phrenic nerve injury. After symptomatic treatment, the related complications were improved and the patients could tolerate them. Additionally, we could observe that the lesion showed decreased CT density after ablation in the CT image. 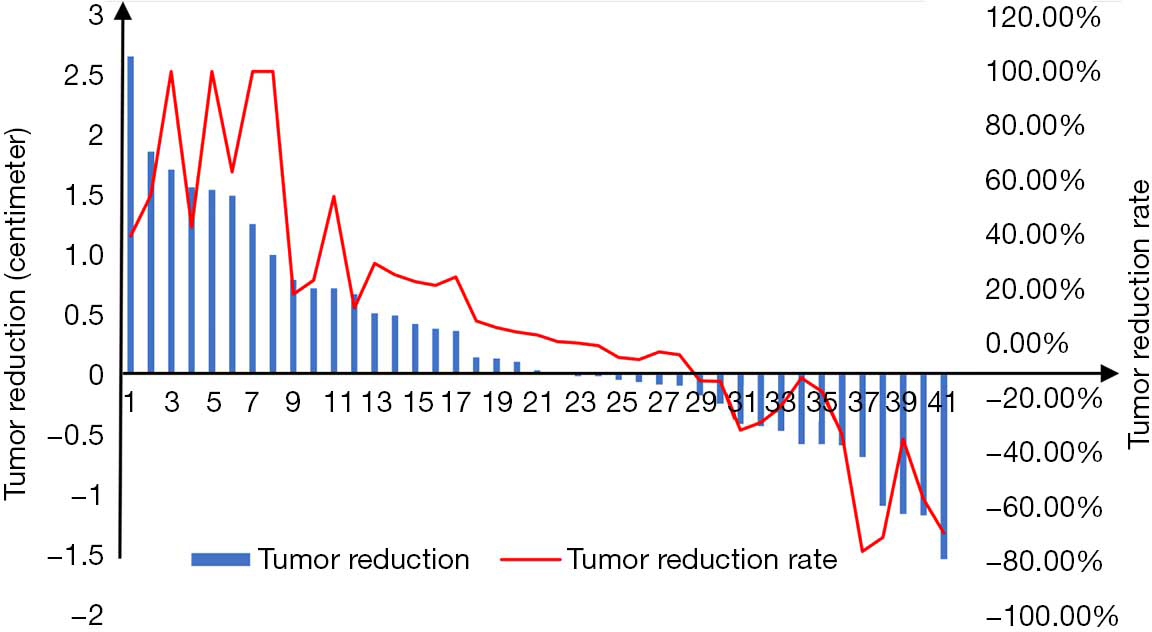 Studies showed that resection of lung tumors that met the surgical indications could achieve a satisfactory effect of extending the survival time, but only a small part of lung cancer patients can get the surgery (13). Because some patients with lung cancer could not be treated by radiotherapy and surgery, microwave ablation offered an opportunity to cure it. Dupuy et al. applied radiofrequency ablation to the treatment of lung cancer in 2000, opened a new era of minimally invasive treatment for cancer (14). Several studies indicated that microwave ablation might be a more effective method to treat solid tumors (15,16) and had a similar complication incidence with radiofrequency ablation (17). Microwave thermal ablation was to take advantage of the thermal effect of microwaves and the fact that tumor cells were not heat resistant. It emitted microwaves (2,450 or 915 mHz) through the puncture needle in the tumor, so that water molecules in the tissue could absorb the microwave energy and generate heat by high-speed motion, oscillation and friction. Because of the rapid rate of microwave temperature rise, the local temperature in the tumor lesion could exceed 100 °C in a very short time, resulting in coagulation necrosis of the protein of the tumor cells, so as to inactivate the tumor tissue and achieve the purpose of treatment. Inflammation could further lead to tumor necrosis after treatment (18). Ablation of tumor cell fragments may also lead to systemic tumor control by initiating or enhancing tumor-specific adaptive immunity (19). In addition, the low blood flow of lung tumor tissues made microwave ablation feasible and effective in the treatment of lung tumors (20).

In this study, no microwave ablation-related death occurred and the success rate of microwave ablation was 100%. Postoperative complications were only pneumothorax in 13.3% patients. The incidence of complications in this group was low, which might be correlated with our selective ablation strategies, especially the selection of puncture protocol. Doctor’s skilled puncture technique might also play an important role in this success. Pneumothorax was one of the most common complications of microwave ablation, literature reported the rate was 10–67% (25). However, merely 3.8–15.7% of the pneumothorax required intercostal catheters (23). There were also reports of late pneumothorax occurring on the 2–5 day after radiofrequency ablation (26), so it was necessary to perform X-ray and confirm the presence of pneumothorax. Pleural effusion was also a common complication, which was thought to be the body’s sympathetic response to heat damage. And Wolf et al. reported a 0.7% incidence rate of effusion, with no one requiring drainage (17). The incidence of pulmonary infection caused by ablation was 1–6% (27). However, we could not ignore the fact that most of the patients with lung cancer were elderly, who could not tolerate surgical treatment and were often accompanied by basic lung diseases. Pulmonary infection and inflammation might lead to a sharp decline in lung function and even death of the patients, which need more attention from doctors. Bleeding was not common because of hemostatic effect of thermal ablation. Microwave ablation may also cause damage to peripheral nerve tissue, such as brachial plexus injury, phrenic nerve injury and phrenic hernia, but they were rare (27). Bronchopleural fistula, acute respiratory distress syndrome, rib fracture, pulmonary embolism and air embolism also have been reported as rare cases. Most of the above complications could be improved after symptomatic treatment, and patients could be well tolerated. There were several limitations of our study. First, it was a retrospective research. And the number of clinical cases included in our study was a little small. Additionally, the follow-up time was not enough to observe the endpoint.

CT guided percutaneous microwave ablation was demonstrated to be an effective means of local physical therapy for lung cancer in our study, and its advantages of less trauma and low complication rate could be applied in more patients who could not receive surgical treatment. In summary, microwave ablation is a recommended promising technique. We will enroll more patients in our prospective trial and conduct longer follow-up to obtain survival data.

Conflicts of Interest: All authors have completed the ICMJE uniform disclosure form (available at http://dx.doi.org/10.21037/apm-20-255). The authors have no conflicts of interest to declare.

Ethical Statement: The authors are accountable for all aspects of the work in ensuring that questions related to the accuracy or integrity of any part of the work are appropriately investigated and resolved. Approval of this study was obtained from Shanghai Pulmonary Hospital Ethical Inspection Committee (ethical number 18Q016NJ). This study was conducted in accordance with the Declaration of Helsinki (as revised in 2013). Written informed consent was obtained from the patient for publication of this manuscript and any accompanying images.