Effect of immunotherapy on patients with unexplained recurrent spontaneous abortion

Recurrent spontaneous abortion (RSA) refers to spontaneous abortion that occurs for more than three times continuously between the patient and the same partner (1). Other studies showed that more than 60% of the women, who have two consecutive spontaneous abortions, were more likely to have spontaneous abortion in a second pregnancy. Therefore, two consecutive spontaneous abortions could be called recurrent abortion (2,3). At present, it is generally believed that immune factors account for 60% of unexplained recurrent spontaneous abortion (URSA), of which alloimmune recurrent abortion is more common, mainly due to the abnormal recognition of fetal paternal antigen by the mother (4), resulting in the lack of maternal blocking antibody (BA), other cellular and humoral immune abnormalities, embryo suffering from abnormal immune system attacking (5). All treatments used for URSA depend on immunomodulation for their effects, and paternal immunization, intravenous immunoglobulin (IVIg), and the use of growth factors such as granulocyte-colony stimulating factor (G-CSF) (filgrastim) have been shown to have a beneficial effect in patients with a poor prognosis and when used appropriately, however, these treatment schemes and effects remain controversial (3). The purpose of this study is to explore the therapeutic effect of BA and pregnancy outcome in RSA patients after paternal lymphocyte active immunotherapy (LAI), so as to provide evidence for the clinical effect of this treatment.

From January 2015 to March 2019, 619 patients with RSA who received medical service in our hospital were involved. Inclusion criteria were as follows: (I) the patients were married; (II) there were more than 2 clinical abortions during early pregnancy; (III) maternal BA were all negative; (IV) the chromosome of the couples were normal; (V) no abnormal reproductive tract anatomy by hysteroscopy or ultrasound examination. Exclusion criteria: (I) abnormal immune function or diseases affecting pregnancy; (II) reproductive tract infection and uterine malformation; (III) endocrine hormone disorder. All patients were divided into study group (LAI group) and control group. A total of 465 patients in the study group were 31.62±4.26 years old, and 154 patients in the control group were 31.49±4.82 years old on average. There was also no significant difference between two groups for general information (P>0.05) (Figure 1). The study was conducted in accordance with the Declaration of Helsinki. The LAI involved in this study has been approved by the Medical Ethics Committee of Renmin Hospital of Wuhan University (No. 20130506). All patients in this study have signed the informed consent at enrollment. 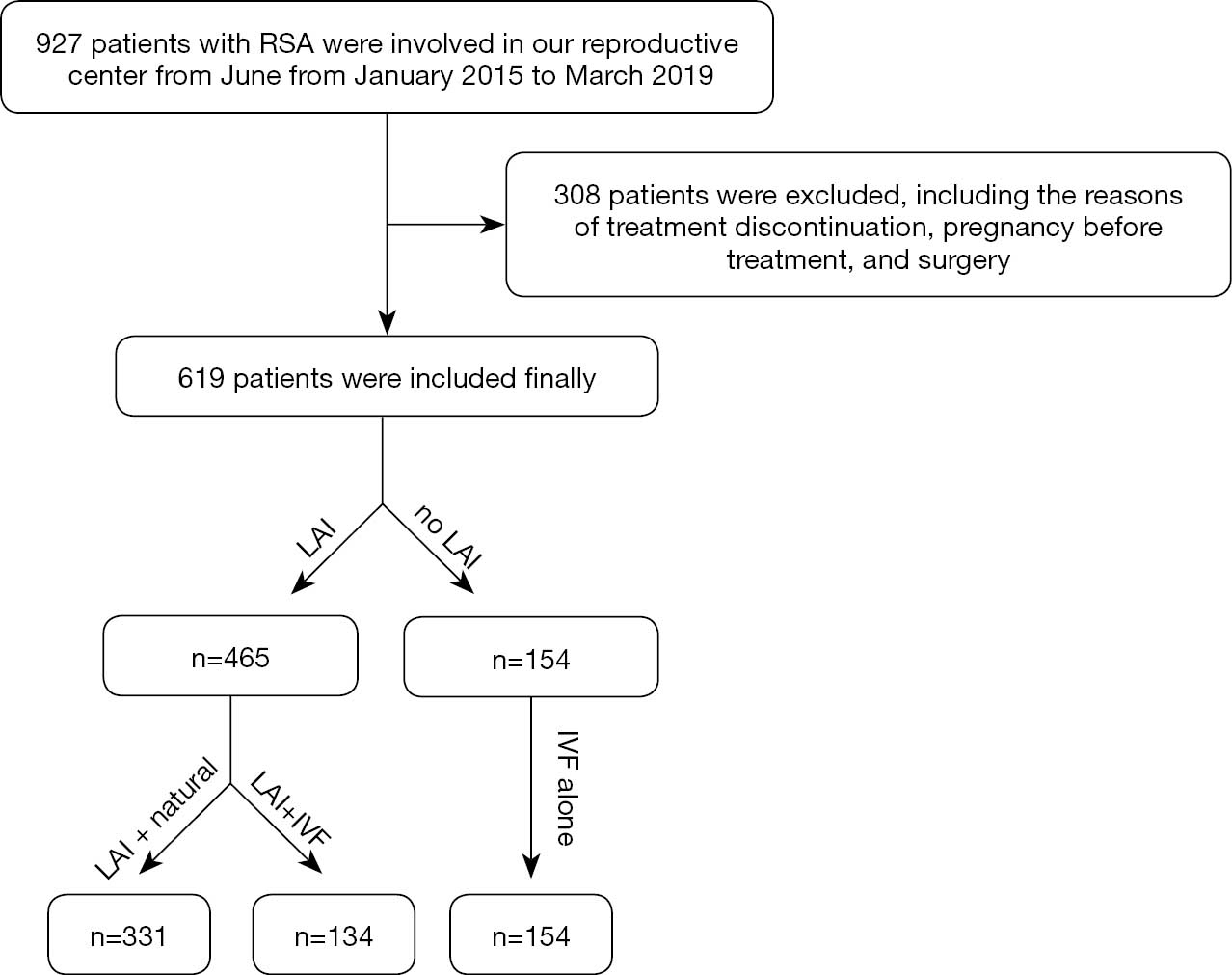 Twenty mL Ficoll lymph separation solution was added into 50 mL centrifuge tube, then 20 mL anticoagulant venous blood was taken from the patient’s husband [if the patient’s husband is suffering from the acquired immune deficiency syndrome (AIDS), etc., blood can be taken from healthy volunteers], and slowly spread on the liquid surface of lymph separation along the tube wall; centrifuged at 3,500 rpm for 20 minutes to get the monocyte layer; centrifuged at 1,500 rpm for 10 minutes to discard the supernatant; the number of cells was adjusted to 1×108/mL in sterile saline after washed twice. The patients were inoculated at 6–8 points on the medial side of the forearm once every 2 weeks, four times for a course. After that, the patients returned to the hospital to detect the BA. If the antibody was positive, patients might become pregnant [through natural or in vitro fertilization (IVF)]. If pregnancy, immunotherapy was still continued once every month for 4 times. Control group: IVF for pregnancy after serial examinations.

Enzyme linked immunosorbent assay instrument was used to detect BA in the blood of patients, and optical density was measured (cut off =0.2, >0.2 as positive, otherwise negative).

Table 1 The characteristics of the included population
Full table

After 77.6% (361/465) of all the patients in LAI group received the immunotherapy, the maternal BA was changed from negative to positive. The conversion rate of maternal BA was increased as the increase of active immunization (P<0.0001) (Table 3).

Effect of BA conversion on pregnancy outcome in LAI group

There are many reasons for RSA, including gene, anatomy, endocrine, immune function and so on. It has been shown that the occurrence of URSA is closely related to the immune imbalance (6). The immune system of the normal pregnant mother does not reject the fetus, as a foreign substance (7). Successful pregnancy is closely related to the maternal immune system, as well as the specific antibodies produced by the mother. The BA, as an important one of specific antibodies, can maintain the normal growth and development of embryo. In the early stage of pregnancy, if BA is deficient due to abnormal mother’s immune system, the embryo will be repelled and early abortion occurred (8). In LAI, through the transplantation of lymphocytes from the husband into the patient’s body, the patient’s immune system is stimulated to promote the production of BA (9), enabling the patient to achieve a successful pregnancy. If the patient’s husband is suffering from AIDS, etc., blood can be taken from healthy volunteers, which greatly avoids the occurrence of infectious diseases.

Our data showed the maternal BA was changed from negative to positive, after 77.6% of all the patients in LAI group received the lymphocytes immunotherapy from the husband. The conversion rate of maternal BA was increased as the increase of active immunization (>4 times, P<0.05). The pregnancy rate of LAI Group was higher than that of the control group (P<0.05), and there were significant differences on live rate and abortion rate (P<0.05). In addition, compared with the natural pregnancy, the live rate was higher, and the abortion rate was lower in IVF patients after active immunization, although the difference was not significant (P>0.05). It was suggested that active immunotherapy could convert BA and improve the pregnancy outcome significantly. However, there are also some problems. For example, those patients who cannot achieve the natural pregnancy within 3–6 months after active immunization, still need to look for the help of IVF. There are also patients who still have a negative BA after a course of treatment, may need the second or even the third course of treatment. Along with the time, the patients want to receive IVF urgently, instead of active immunization. In addition, there are also some people, who are pregnant successfully but miscarry again after treatment, which weakens confidence of patients, and also confuses doctors. It is also proposed in the literature that the effect of different treatment methods and doses is also quite different, so the standardized treatment in clinical needs to be made (16,17).

In conclusion, the serum BA can be routinely detected or the patients with RSA. If people have a negative BA, lymphocyte active immunization will be recommended. If the BA is converted to positive after treatment, natural pregnancy will be recommended. If the patient has an urgent desire for pregnancy, IVF can be used immediately. However, at present, the effect of active immunotherapy on RSA still needs to be studied in larger samples, and its mechanism still needs to be further explored (12).

Conflicts of Interest: All authors have completed the ICMJE uniform disclosure form (available at http://dx.doi.org/10.21037/apm-19-440b). The authors have no conflicts of interest to declare.

Ethical Statement: The authors are accountable for all aspects of the work in ensuring that questions related to the accuracy or integrity of any part of the work are appropriately investigated and resolved. The study was conducted in accordance with the Declaration of Helsinki. The LAI involved in this study has been approved by the Medical Ethics Committee of Renmin Hospital of Wuhan University (No. 20130506). All patients in this study have signed the informed consent at enrollment.