The application of thromboelastography in risk stratification for selective thromboembolism prophylaxis after total joint arthroplasty in Chinese: a randomized controlled trial

Venous thromboembolism (VTE), including asymptomatic and symptomatic deep vein thrombosis (DVT) and pulmonary thromboembolism (PE), is a life-threatening complication after total hip arthroplasty (THA) and total knee arthroplasty (TKA). However, the VTE prophylaxis remains a controversial topic in total joint arthroplasty. Different incidences of VTE have been reported in various studies. Zhou et al. found that Asian populations have a lower rate of high-risk gene mutations (1). Although many studies have shown that the incidence of DVT is lower in Asian patients than in the Western population (2-4), some studies from China and southeast Asia have still shown significant incidence of DVT in high-risk orthopaedic patients (5-7).

In terms of prophylaxis protocol, American Academy of Orthopaedic Surgeons (AAOS) and the American College of Chest Physicians (ACCP) typically recommended the routine use of chemotherapeutic agents (8,9). For Chinese, the Chinese Medical Association advised a 35-day routine chemoprophylaxis after THA and at least a 10–14 day routine chemoprophylaxis after TKA (10). However, W.G. Hamilton et al. simply used a mechanical program without any chemotherapeutic agent, and finally, they found that it was safe and effective (11). But there is a lack of sufficient researches that proves whether it is safe to exclude a chemoprophylactic agent.

Actually, all of these guidelines provided some stratification for patients on the basis of the risk of clotting as well as that of bleeding. Although most of the patients are recommended to receive routine chemoprophylaxis, it is not recommended to use anticoagulants in some patients who are at high risk of bleeding (8-10). Moreover, some researches also used risk stratification to identify the types of patients requiring the chemotherapeutic agent, and then they provided a more individualized and precise protocol for their patients (11). However, the stratification used in the research ranged from the use of risk assessment tables to scoring systems, with an occasional use of a long list of risk factors (12-14), which was delayed. Few of stratification methods were specially built for patients who underwent THA or TKA. Currently, there is a detection technique called thromboelastography (TEG), which is a real-time tool to observe the whole process of blood coagulation and is clinically valuable in the evaluation of whole-blood hemostasis (15).

This study was performed in accordance with the ethical standards laid down in the Helsinki Declaration as revised in 2013. All of the patients gave their informed consent prior to their inclusion in the study. The study was approved by institutional human ethics committee of Guangdong Provincial People’s Hospital (No. 2016-46). The trial protocol was submitted to ClinicalTrials.gov, and the ClinicalTrials.gov Identifier number is NCT03804697.

Source of data and participants

This was a single-center, participant- and outcome assessor-blinded, randomized controlled trial. Asian patients who underwent hip or knee arthroplasty in the Department of Orthopedics (name of institution blinded) from August 2016 to August 2017 were included. All of the cases were categorized into the same treatment group, with 6 surgeons.

Inclusion criteria were as follows: patients aged >18 years and patients who underwent a unilateral or bilateral primary TKA/THA.

The participants underwent a baseline assessment after they were determined to be eligible for the study.

All of the patients and surgeons were blinded to the treatment options. Only one resident was informed about the group assignment and he/she prescribed an anticoagulant for patients if needed. 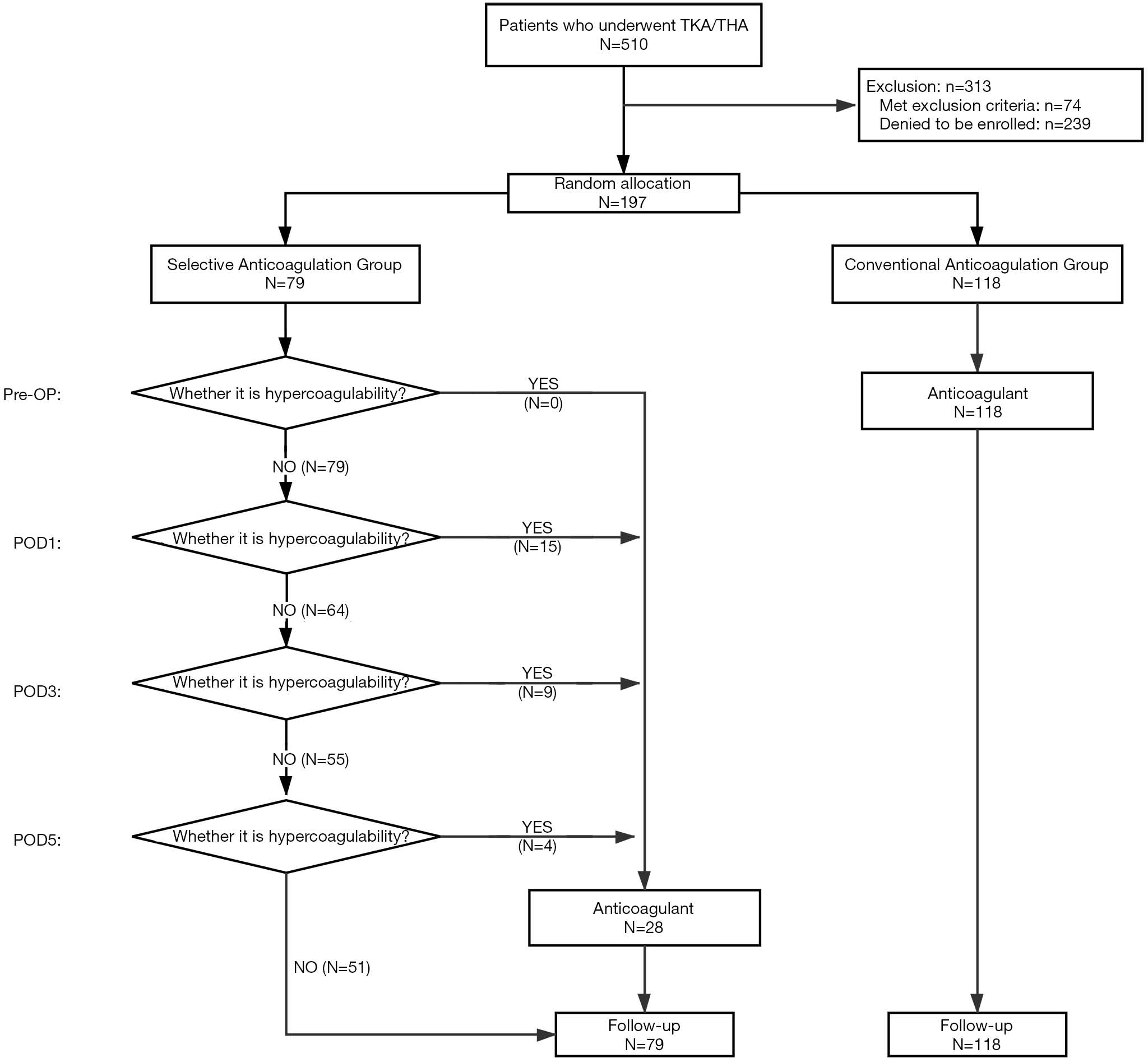 The dosage regimen was as follows: hypodermic injection of 0.4 ml enoxaparin (0.6 mL: 6000 A*aIU, Clexane®, Sanofi Winthrop Industrie, France) per day for 5 days, followed by oral administration of 10 mg rivaroxaban (Xarelto®, Bayer Pharma AG, Germany) per day until one month after the surgery.

Previous publications were used to determine the power of both groups (17,18). At least 50 patients per group are necessary to measure the difference with a bilateral alpha of 0.05 and a power of 80%. However, there was no accurate incidence rate of DVT in Asian populations. Finally, we included a minimum of 79 patients in each group.

The baseline data of the patients is shown in Table 1. There was no significant difference between the two groups in terms of baseline characteristics, indicating that the samples in the two groups were randomly distributed and the two groups of samples were comparable. 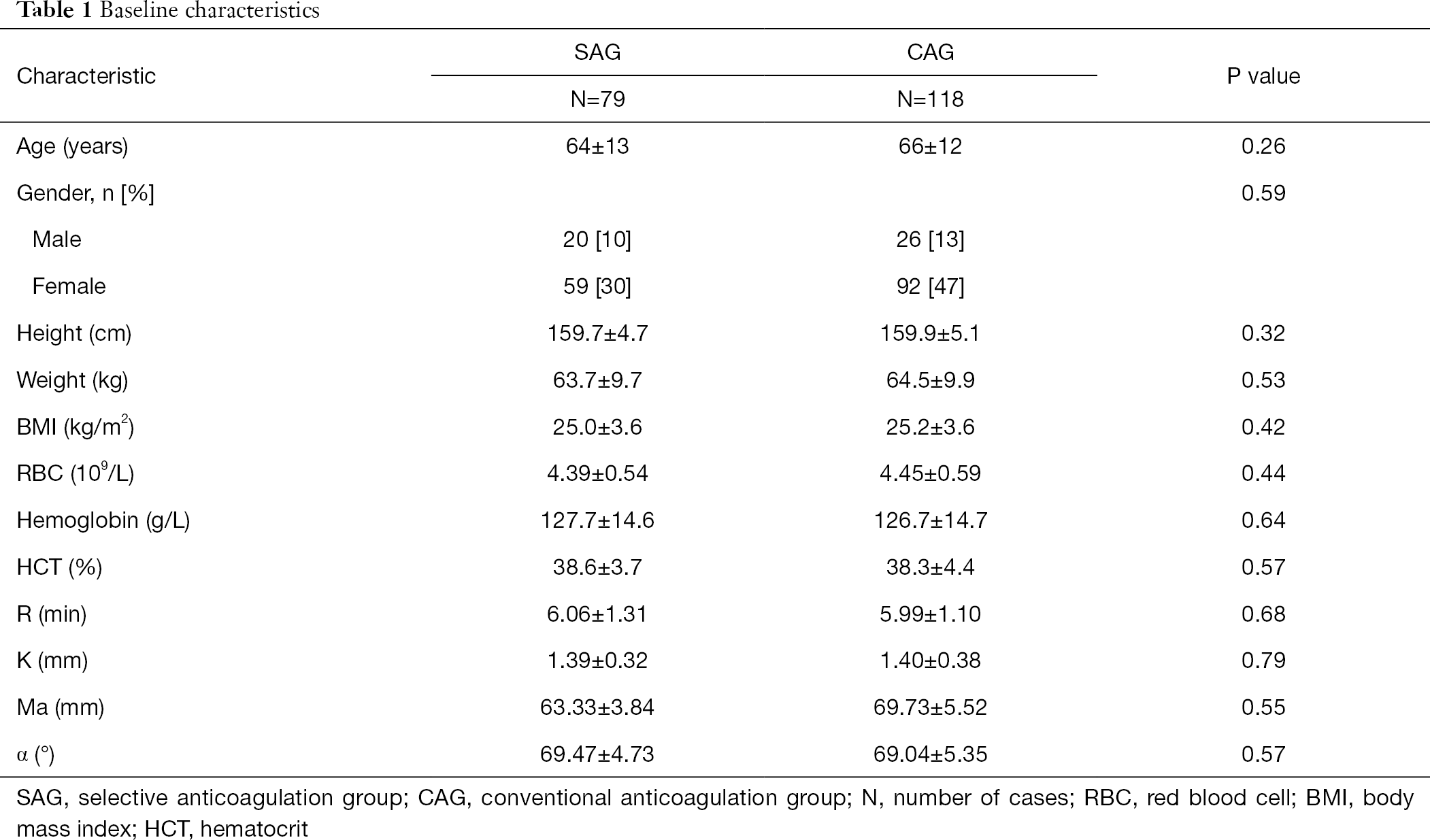 There was no significant difference between the two groups in terms of hidden blood loss, perioperative blood loss, and total blood loss (Figure 3).

It is now known that the type of thromboprophylaxis is not uniformly indicated for an individual patient because a uniform protocol makes it difficult to maintain the balance between effectiveness, contraindications, side effects, and cost (19,20). For these reasons, currently some approaches are used for the stratification of patients into defined risk categories, such as risk assessment models and some scoring systems. However, the stratification is always based on patients’ preoperative characteristics, such as age, surgical procedure, history of VTE, presence of malignancy, and thrombophilia, which means that it is cannot reflect the real-time situation of thrombophilia (9,12,21). TEG provides a direct overview of the clotting process, from initial thrombin generation to formation of fibrin strands and fibrinolysis, which means that it is real time and can instantly reflect thrombophilia (16,22). Moreover, it can sensitively identify patients with post-injury hypercoagulability (23-25). However, the use of TEG to assess the risk of VTE and then to guide the regimen for pharmacological prophylaxis has not yet been described. In our study, we found that risk stratification by TEG to selectively prevent VTE was effective.

On the one hand, although many studies have provided the clinical practice guidelines for VTE prophylaxis, there is no standard prophylaxis guideline for VTE prevention after arthroplasty specifically (8-10). Furthermore, in these guidelines, patients who underwent THA and TKA were at high risk of DVT, which means that these patients should accept uniform chemoprophylaxis. Thus, a so-called “carpet” approach for uniform prophylaxis has been proposed (26-28).

Studies have shown that reasonable use of anticoagulants can effectively reduce the incidence of VTE after hip and knee arthroplasty (38-40). However, inappropriate use of anticoagulants can increase the incidence of adverse events, such as infection, poor wound healing, and increased blood loss (27,41,42). Clinicians paid attention to the clinical preventive effect of drugs and ignored their adverse reactions. We now know that before deciding to use anticoagulants, the benefits of thrombosis reduction and the risks of drug-related infections and bleeding should be fully assessed. In other words, a safe and reliable screening method is very important. Our study proved that selective anticoagulation using TEG for risk stratification can reduce the volume of transfusion and transfusion rate, and this finding indicates that selective anticoagulation is safer than traditional anticoagulation.

There are some limitations in this study. First, this study was a single-center, randomized controlled study with a small sample size. The results of this study need to be strengthened and verified further by a multi-center study. Second, because of the interaction between rivaroxaban and antihypertensive drugs, enoxaparin was chosen as a preventive drug during hospitalization, and rivaroxaban was chosen after discharge because it is convenient to carry and use the drug. There are differences in efficacy among different patients because rivaroxaban can be affected by antihypertensive drugs, which may cause bias in the incidence of VTE after discharge. However, because both groups of patients used the same anticoagulation regimen, this difference can be ignored. Finally, guidelines suggest that 1 month post-surgery is a high-risk period for thrombosis, but this study only tested the patients who underwent TEG 5 days after surgery. The main consideration is that the TEG test should be carried out in a hospital, but patients are usually discharged within 5 days after the operation. If patients have to continue TEG examination up to one month after the operation, their financial and time burden will increase and the feasibility of the scheme will reduce. Therefore, after 5 days, patients should pay close attention to the condition of their lower limbs. If symptoms related to VTE, such as pain and swelling occur, patients should return to the hospital for re-examination.

Ethical Statement: The authors are accountable for all aspects of the work in ensuring that questions related to the accuracy or integrity of any part of the work are appropriately investigated and resolved. This study was performed in accordance with the ethical standards laid down in the Helsinki Declaration as revised in 2013. All of the patients gave their informed consent prior to their inclusion in the study. The study was approved by institutional human ethics committee of Guangdong Provincial People’s Hospital (No. 2016-46).