Esophageal cancer (EC) is an ordinary malignancy that ranks 9th most common cancer worldwide and the fifth most frequent in China (1,2). Esophageal squamous cell carcinoma accounts for almost 80% of EC cases in South-Eastern Asia (3,4). Due to the difficulty of prophase clinical diagnosis, most of EC patients develop high rate of metastasis and recurrence with the overall 5-year survival rate below 10% (5).

Surgical resection remains the main treatment for EC. Traditional thoracic esophagectomy, which requires cervical, thoracic, and abdominal dissections, is still considered to be an invasive procedure. Among these procedures for EC patients, the thoracic procedure is considered to be the most invasive (6). To avoid the need for conventional thoracotomies as minimally invasive esophagectomy (MIE) requires, thoracoscope and/or laparoscope or transhiatal esophagectomy have become a standard procedure for resection of EC which reduces perioperative morbidity and mortality. The esophagectomies and lymphadenectomies in the mediastinum performed under thoracoscopically requires selective single-lung ventilation to ensure an adequate operative space (7). Traditionally, transhiatal esophagectomy has been another option for patients with early esophageal carcinoma and for high-risk patients because this procedure enables the surgeon to avoid a standard thoracotomy (8,9). However, this approach is less radical and may often induce paralysis of the left recurrent laryngeal nerve because the majority of procedures must be performed in a blind manner (10). A review of more than 100 esophagectomy cases suggests that the upper mediastinum is the most difficult and important space in the dissection of the thoracic esophagus.

A recent study introduced the application of CO2 aeration in mediastinal esophagectomy to provide a better surgical vision and reduce the difficulty of the surgery (11,12). In this article, we aimed to research the safety of CO2 aeration in mediastinoscopic esophagectomies through the neck approach. We present the following article in accordance with the ARRIVE reporting checklist (available at http://dx.doi.org/10.21037/apm-20-804).

A total of 15 pigs construct an experimental animal model of mediastinal CO2 aeration. They were divides to three groups based on the pressure of CO2 aeration, 5, 10 and 15 mmHg. Each pig was subjected to only 5, 10 or 15 mmHg. The clinicopathological features of those pigs in both groups are similar.

All pigs were placed in a supine position with the neck slightly extended while they were under general anesthesia. A 10 cm left cervical collar incision was made, and the carotid artery, the jugular vein, and the left recurrent laryngeal nerve were exposed. A 12-mm trocar was inserted through the incision, and a pursestring suture was made to prevent gas leakage and the dislocation of the trocar. Carbon dioxide was then insufflated up to different pressure (5, 10 and 15 mmHg), and a flexible laparoscope (EL2-TF410; Fuji Photo Optical Co., Tokyo, Japan) was inserted through the 12-mm trocar in the neck.

SPSS 17.0 (SPSS, Chicago, IL, USA) was utilized to statistical analyze. Results were presented as mean ± SD. Chi-square test and student t-test were selected when appropriate. It was considered statistically significant, when P<0.05. 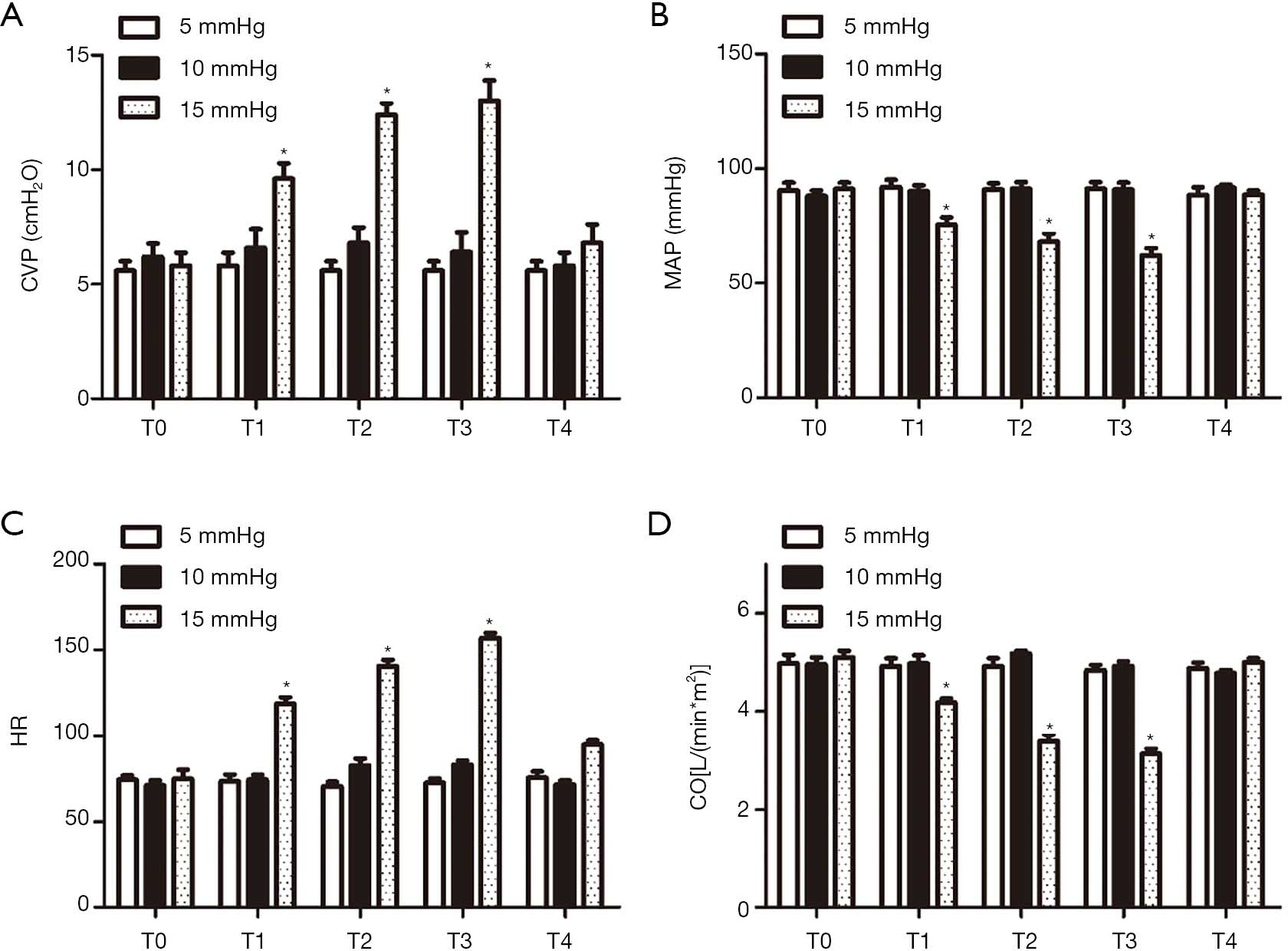 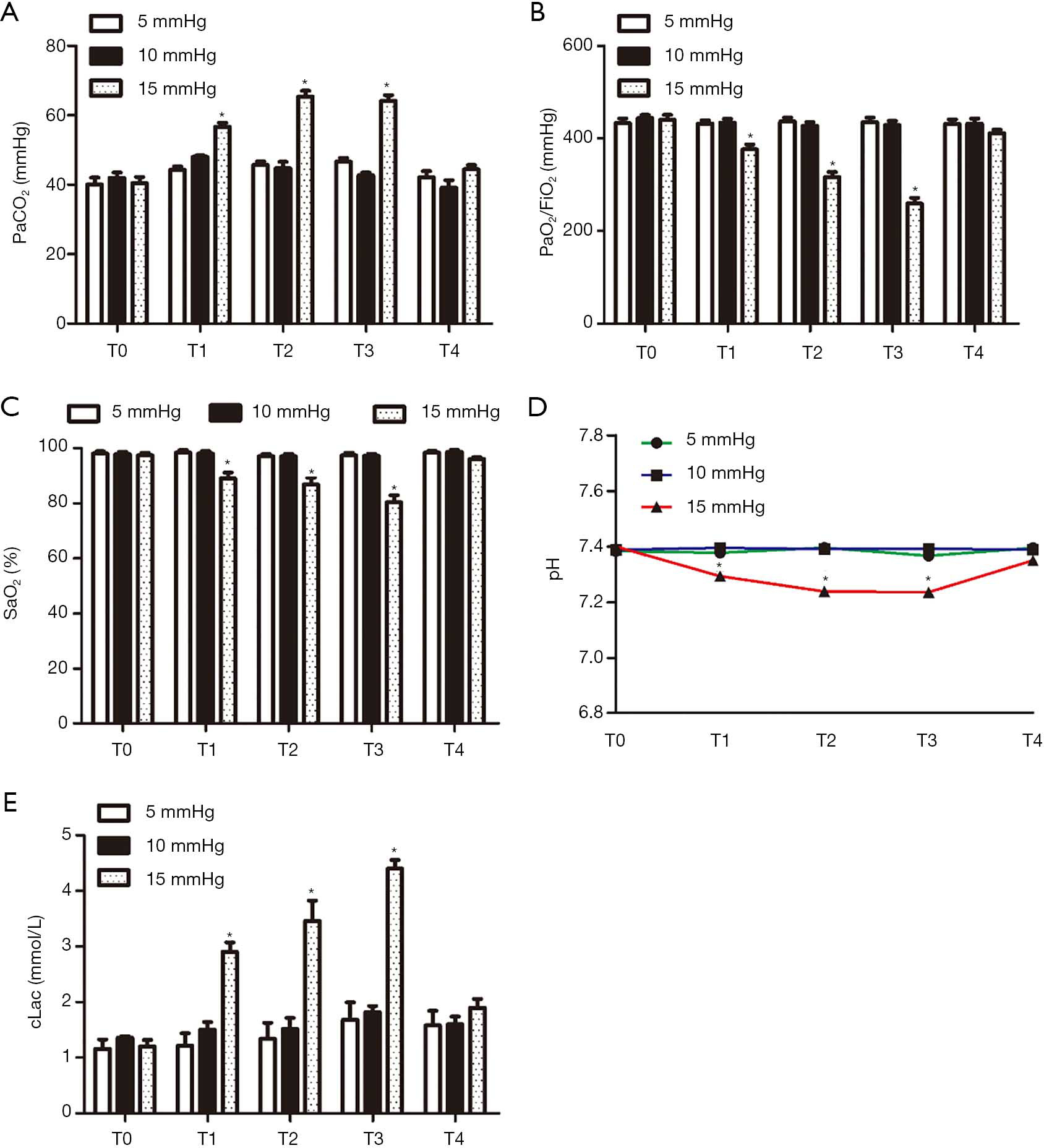 The incidence of EC has increased globally for the past 2 decades. Approximately 482,300 people were diagnosed with EC every year (12). Patients with squamous cell carcinoma of the esophagus are frequently smokers and heavy drinkers, and consequently have several chronic diseases, including those of the cardiovascular, pulmonary, and hepatic systems (13).

MIE has the advantages of less trauma, quick recovery, less influence on cardiopulmonary function and less postoperative pain, which can theoretically solve the problems of conventional EC surgery (14). Compared with other endoscopic resection of EC, mediastinoscopic resection of EC can reduce the incidence and mortality of postoperative complications for patients with serious complications, such as heart and lung diseases (15). However, due to the characteristic of esophageal anatomical location, the operation space for surgical separation and resection is limited, which is easy to cause damage to blood vessels and nerves (15). The dissection of lymph nodes is also controversial. The development of MIE is slow. How to improve the skills of mediastinoscopic resection of esophagus and reduce the risk of surgery is a new challenge for minimally invasive surgery of esophagus (16).

It has been reported that since the establishment of artificial CO2 pneumoperitoneum, the pneumoperitoneum pressure, the length of operation time and other factors, the internal environment has been effected, including circulatory system, respiratory system, acid-base balance, metabolism and so on (17). Pneumoperitoneum will influence body hemodynamics which most of the patients can fit it well (16). According to the 2001 European Association of Endoscopic Surgery Clinical Practice Guidelines, the effect of cardiac output will not have clinical impact on patients without other diseases when the standard pneumoperitoneum pressure is 15 mmHg (18). However, patients with potential heart diseases need special attention when undergoing laparoscopic surgery. Increased HR and afterload, combined with increased systemic vascular resistance, can potentially increase the tension of ventricular wall which may lead to myocardial ischemia. Safran et al. studied the hemodynamic effects of laparoscopy on patients with severe heart disease (AAA grade III or IV). They found that MAP and SVR increased significantly and CO decreased significantly when pneumoperitoneum pressure was 15 mmHg. Half of the patients suffered from decreased oxygen delivery accompanied by significant increase in pulmonary artery pressure due to increased intra-abdominal pressure. The authors pointed out that during pneumoperitoneum, these patients experienced temporary cardiac decompensation due to the decrease of left ventricular reserve. In another research, researchers found that MAP, sVR and pulmonary artery wedge pressure increased significantly during laparoscopic surgery. Moreover, among the 17 patients, 3 patients needed nitroglycerin to control the blood pressure during surgery. However, there were no intraoperative complications or long-term postoperative complications in the two studies, and there were no cases of conversion to laparotomy. The authors believe that laparoscopic surgery is safe for patients with heart diseases, but these patients need to be closely monitoring. Metzelder et al. applied 10 mmHg pressure CO2 pneumoperitoneum to healthy adult pigs for 180 min. The results showed that prolonged CO2 pneumoperitoneum had no obvious effect on adult pigs. In recent years, CO2 inflation technology has been gradually applied in mediastinoscopy, which has the following advantages: (I) expanding the operation space; (II) making the tissue spaces looser; (III) the operator can change from one-handed operation to two-handed operation. Therefore, compared with the traditional mediastinal approach surgery, mediastinal CO2 assisted EC surgery has the advantages of better exposure of the operation field, shorter operation time and more thorough lymph node dissection. However, there is no relevant literature to study the safety of CO2 inflation technology in mediastinoscopy.

The impact of mediastinal CO2 inflation on the circulatory system is mainly related to the increase of pressure in mediastinum, which may affect venous reflux, thus affecting the change of blood flow (preload) and sympathetic nerve excitation, catecholamine release, renin-angiotensin system activation, increased vascular tension (afterload) caused by hypercapnia. The main manifestations are changes in cardiac output, heart rate, arterial blood pressure and other indicators. The reasons may as follows. (I) The increase of pressure in mediastinum leads to contraction of visceral vessels and reduction of inferior vena cava reflux, thus reducing cardiac preload; aeration of mediastinum leads to increase of intrathoracic pressure, resulting in decrease of lung volume, increase of airway resistance, resulting in changes in heart and large blood vessels and increase of atrial and superior and inferior vena cava pressure, thus further reducing the change of blood volume and the preload of heart. (II) The direct effect of the increase of mediastinal internal pressure is to cause the increase of peripheral resistance. The average arterial pressure is positively correlated with cardiac output and peripheral vascular resistance. The effect of the increase of peripheral resistance is greater than that of the decrease of cardiac output, and the average arterial pressure is slightly increased. (III) PaCO2 in the experimental group increased during the operation, accompanied by a decrease in pH, resulting in mild respiratory acidosis. CO2 retention excites sympathetic nerve and increases catecholamine secretion, which increases heart rate, vasoconstriction, cardiac pumping function and blood pressure. Hypercarbonic acid can also indirectly stimulate aortic body chemoreceptors, increasing the concentration of catecholamine in blood, which activates renin-angiotensin system and releasing vasopressin, resulting in increased vascular resistance. Decrease of cardiac output will also cause reflex increase activity of cardiac sympathetic nerve. (IV) Anesthetic effect. (V) Tracheal intubation stress reaction before mediastinal inflation or ketamine-induced heart rate increase. Elevated catecholamines caused by hypercapnia can increase cardiac contractility. Cardiac output decreases cause a reflex increase of cardiac sympathetic nerve activity, and also produces positive inotropic effect. In the experiment, the fluid infusion speed is adjusted according to the CVP, so the CVP is relatively constant and the circulation stability is maintained. In this experiment, pigs were inflated in mediastinum for 2 hours. The results showed that when the pressure was 15 mmHg, HR, myocardial contractility and CI decreased, while preload and afterload increased. Pre-load increased in 5 and 10 mmHg groups, while HR, post-load and CI did not change significantly. High inflation pressure in mediastinum leads to decrease of cardiac output, stroke output, HR and MAP, and increase of systemic vascular resistance. The possible mechanism is that high inflation pressure in mediastinum compresses superior and inferior vena cava which increases cardiac preload and decreases cardiac output. Through sympathetic nerve excitation or renin-angiotensin system, the hypercapnic environment formed by CO2 further affects myocardial metabolism which eventually leads to further decrease of myocardial contractility.

Mediastinal CO2 inflation pressure causes compression of mediastinal pleura, resulting in an increase in intrathoracic pressure which leads to compression of alveoli at the bottom of the lung. Lung compliance, functional residual volume, tidal volume and alveolar ventilation are decreased, and airway resistance and pressure are increased which affect ventilation function. In 15 mmHg group, PaCO2 increased, accompanied by a decrease in pH, showing mild respiratory acidosis, which did not change with time. The higher inflation pressure of mediastinum CO2 reduces the effective ventilation volume of alveoli, thus raising the partial pressure of carbon dioxide at the end of respiration. In addition, due to the decrease of pulmonary ventilation volume, carbon dioxide retention results in hypoxemia and hypercapnia, and increases the partial pressure of carbon dioxide at the end of respiration. The higher inflation pressure of mediastinal CO2 leads to higher the internal pressure of mediastinal cavity which restrains the lung compliance and increases the airway pressure. Due to the decrease of functional residual volume and total lung volume and imbalance of ventilation/blood flow, the absolute amount of gas exchange in lung is reduced, which ultimately affects the ventilation and air exchange function of the lung and results in hypoxemia in animals in autonomous respiratory state.

Besides, as the mediastinal CO2 inflation is a newly method and has not been widely used in operation, our study still has limitations. All participated pigs were presumably young and healthy, and we are unable to assess the tolerability of this procedure on comparable pigs. The parameters were only monitored for 90 minutes, which is markedly less time than most esophagectomies, and so extrapolation of the available data for longer periods of time is questionable. Moreover, as those pigs were sacrificed immediately after completion of the procedure, the delayed events cannot be predicted and analyzed. The mediastinal CO2 inflation needs more clinical practice and further studies to clarify its value in mediastinal esophagectomy.

Reporting Checklist: The authors have completed the ARRIVE reporting checklist. Available at http://dx.doi.org/10.21037/apm-20-804

Conflicts of Interest: All authors have completed the ICMJE uniform disclosure form (available at http://dx.doi.org/10.21037/apm-20-804). The authors have no conflicts of interest to declare.