Lung cancer patients with multiple primary malignant neoplasms (MPMN) account for 2.5% of all lung cancer patients (1). Most MPMN cases are double primary cancers and often have a poor prognosis (1,2). According to the diagnostic requirements of MPMN, the degree of malignancy of each neoplasm must be clearly determined, and the possibility of metastasis of one of the neoplasms must be excluded (3). In addition, according to whether the time interval between the diagnoses of neoplasms is more than 6 months, MPMN can be divided into non-concurrent MPMN and concurrent MPMN (4). Concurrent MPMN refers to the diagnosis of a second primary neoplasm within 6 months after the occurrence of the first primary neoplasm, while non-concurrent MPMN refers to that the diagnosis of two or more primary neoplasms more than 6 months apart. However, due to no consensus on the standard of care for MPMN nowadays, the final treatment regimen is often individualized and comprehensive (5,6). Herein, we report a rare case of concurrent double primary cancers (stage IIb colon cancer and stage IVb lung cancer), which was effectively treated with a safe regimen combining chemoradiotherapy and maintenance treatment with durvalumab, a fully humanized monoclonal antibody that targets at the PD-L1 molecule. As a sequential maintenance treatment after concurrent chemoradiation, this antibody exhibits an efficacy in improving the prognosis of patients with inoperative stage III non-small cell lung cancers (7).

A 67-year-old male was admitted to the Department of Radiation Oncology & Therapy at the First Hospital of Jilin University on August 26th, 2019, mainly because of chest pain and painful swelling in his left axilla for one month. Past medical history was as follows: Two months before this admission, the patient underwent radical resection for cancer of the left colon due to progressive abdominal distension and abdominal pain for 1 month. Preoperative examination showed a space-occupying lesion of the upper lobe of the right lung, but whether the histological analysis for this lesion was not performed (Figure 1). Abdominal computed tomography (CT) suggested that there was incomplete obstruction in the digestive tract, so he underwent emergency surgery. Postoperative pathology (Figure 2) showed poorly to moderately differentiated adenocarcinoma (pT4aN0) that invaded the serosa and was Ki67 (+50%), p53 (−), CDX2 (+), Villin (+), MLH1 (+80%), MSH2 (>+90%), MSH6 (>+80%), PMS2 (+50%), and CK-pan (+). The patient had a smoking history of more than 40 years and still smoked 1.5–2 packs of cigarettes daily. After admission, the Eastern Cooperative Oncology Group score was 1 point. Positron-emission tomography (PET)-CT showed a space-occupying lesion in the upper lobe of the right lung, which was highly likely to be primary lung cancer, with multiple lymph node metastases in the mediastinum, left axilla, and bilateral lower neck (Figure 3) and right pleural effusion (medium volume). Pathologic features of a lung biopsy showed lung adenocarcinoma, CK-7 (+), TTF-1 (+) (Figure 4), and KRAS G12D mutation but wild-type EGFR, ALK/ROS1, BRAF, and MET (c-MET). Detection of programmed death-ligand 1 (PD-L1, Dako 22C3) in lung biopsy showed CPS was larger than 80% (Figure 4). Exfoliative cytological examination of the pleural fluid showed lymphocytes but did not show cancer cells (Figure 5). The tumor markers included CEA (5.34 ng/mL), CA125 (40.77 U/mL), and CK-19 (17.13 ng/mL). 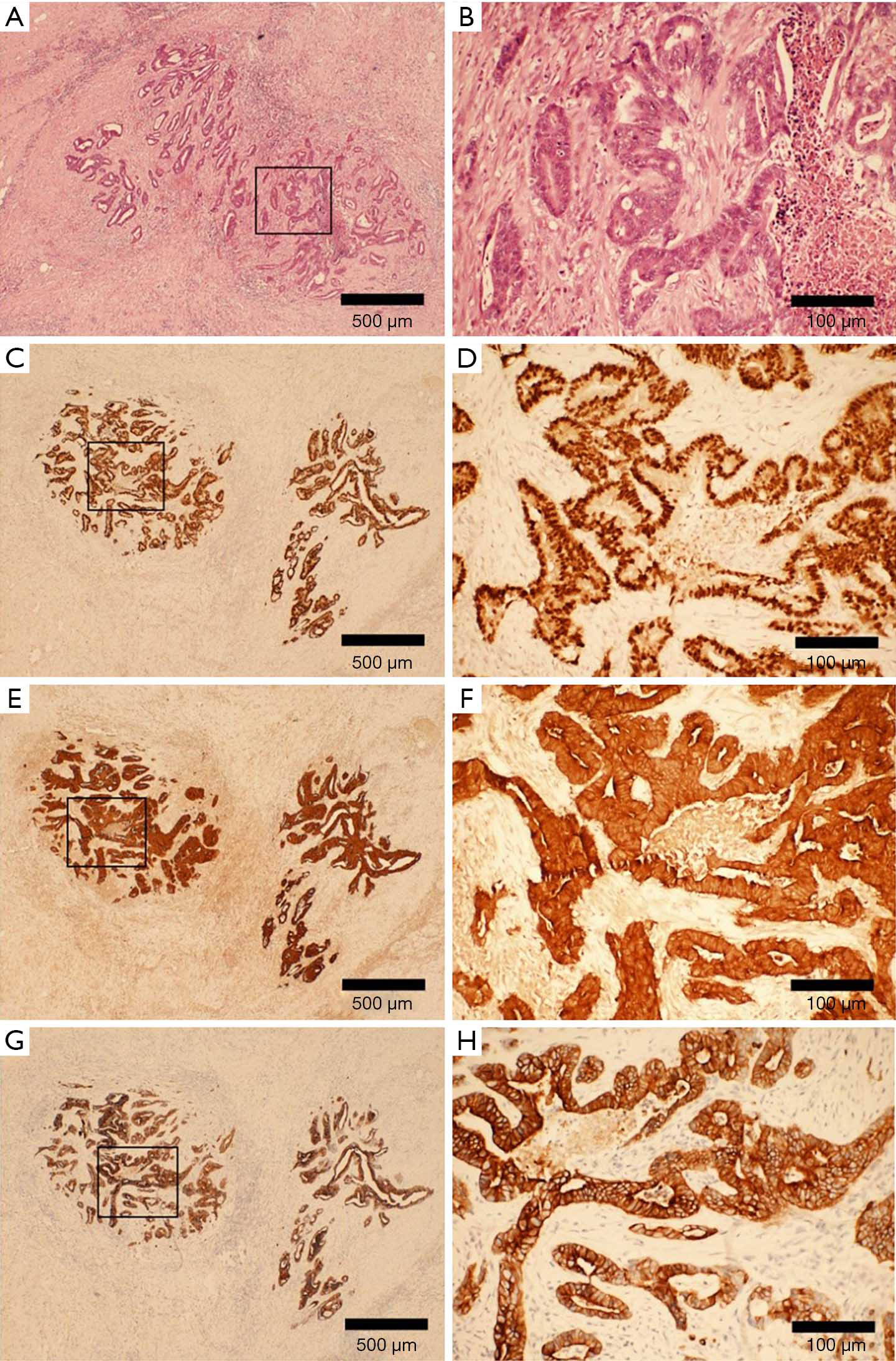 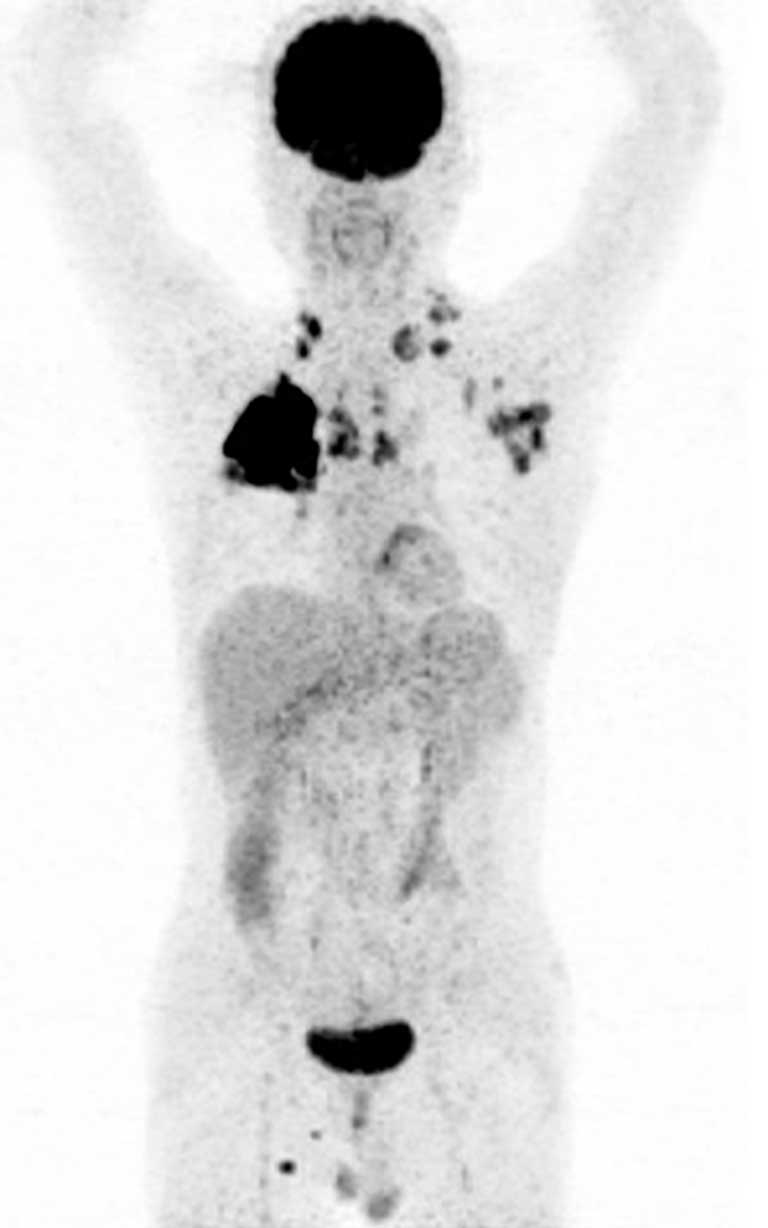 Figure 3 PET-CT at admission (2019-08-27). Suggesting high-metabolic-rate mass in right upper lobe with a maximum standardized uptake value (SUVmax) of 18.3 and multiple lymph node metastases in the mediastinum, bilateral lower neck, supraclavicular region, and left axilla, with a SUVmax of 17.9. 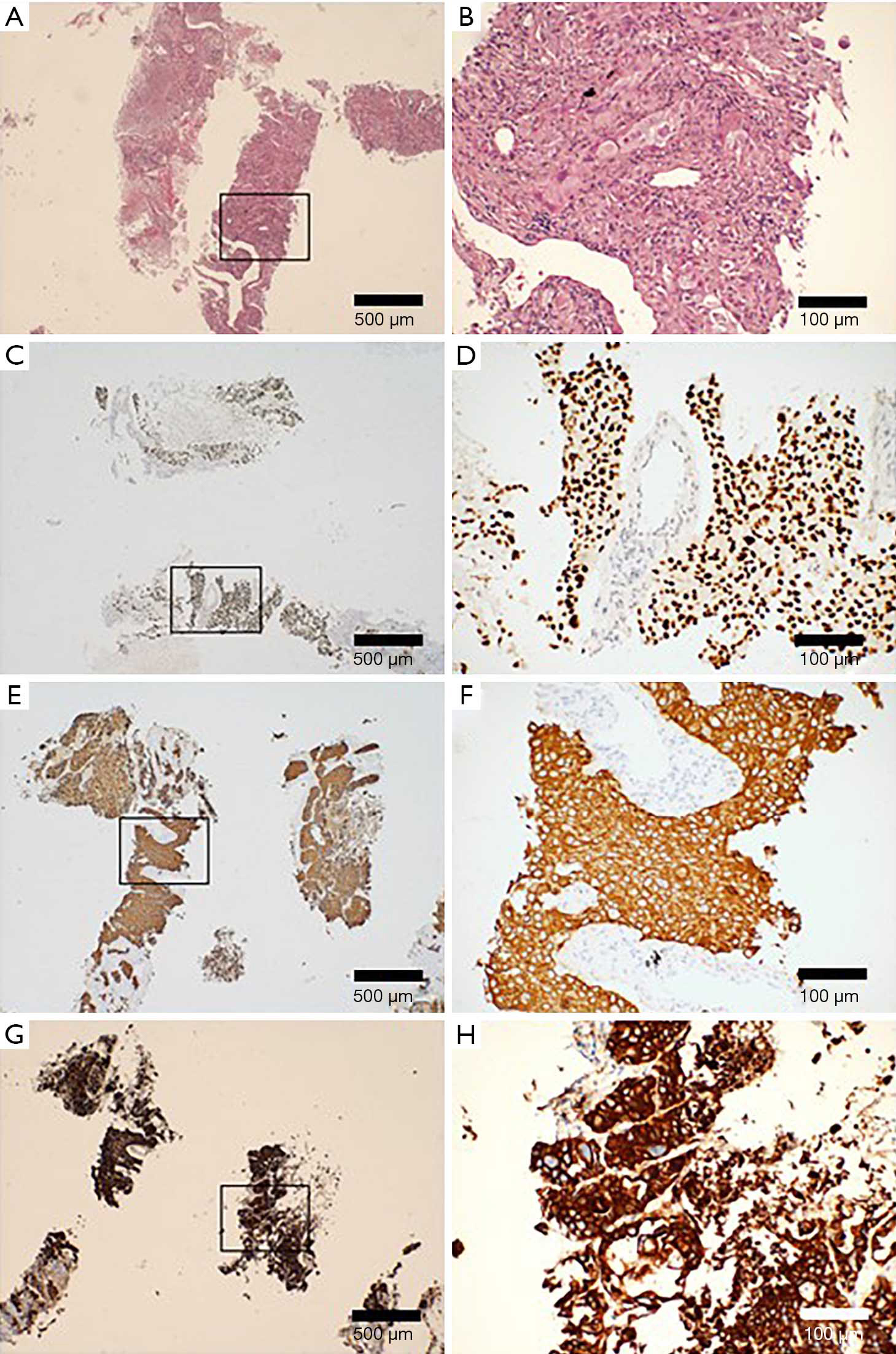 All procedures performed in studies involving human participants were in accordance with the ethical standards of the institutional and/or national research committee(s) and with the Helsinki Declaration (as revised in 2013). Written informed consent was obtained from the patient for publication of this manuscript and any accompanying images.

According to the 8th Edition Cancer Staging System of the American Joint Committee on Cancer, the clinical diagnosis was as follows: stage IVB lung cancer (lymph node metastases in the mediastinum, bilateral supraclavicular regions, bilateral lower neck, and left axilla) and right pleural effusion after radical resection for cancer of the left colon (pT4N0, stage IIb). Taking into account the pain and compression symptoms of the patient, 8 Gy × 3 F palliative radiotherapy (primary lesion and mediastinal metastases) and 6 Gy × 6 F palliative radiotherapy (lymph node metastases in the left axilla, left lower neck, and left supraclavicular region) were given to the patient after he signed the informed consent form (Figure 6). After the symptoms were relieved, the patient received sequential maintenance treatment with durvalumab 500 mg (10 mg of durvalumab per kg of the patient body-weight) every two weeks (7) and the capecitabine plus oxaliplatin (CAPOX) regimen for treatment of colon cancer for 3 months. 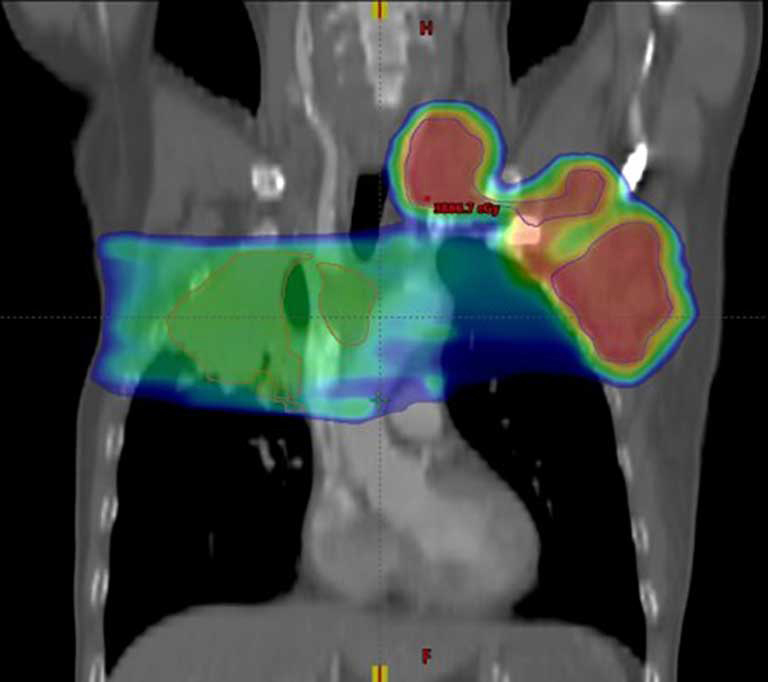 PET-CT was performed at the 3rd and 6th months after treatment (Figure 7). The imaging results suggested complete remission of the lymph node metastases in the neck, left axilla, and bilateral supraclavicular regions. For the primary lesion, the site with high 18F-fluorodeoxyglucose uptake was located in the periphery of the tumor, and biopsy suggested lymphocyte infiltration but did not find residual tumor cells. At this time, all tumor markers were at normal levels. The primary tumor was clinically considered to be in partial remission. The patient received radiotherapy, CAPOX chemotherapy, and maintenance therapy with durvalumab, and overall, the tolerance was good. According to the Common Terminology Criteria for Adverse Events version 4.0, the patient had grade II bone marrow suppression during the treatment, which was mainly manifested as thrombocytopenia and was quickly relieved after symptomatic treatment. The lung toxicity resulting from radiotherapy was mainly grade I radiation-induced lung injury. Durvalumab did not induce abnormalities of thyroid function. 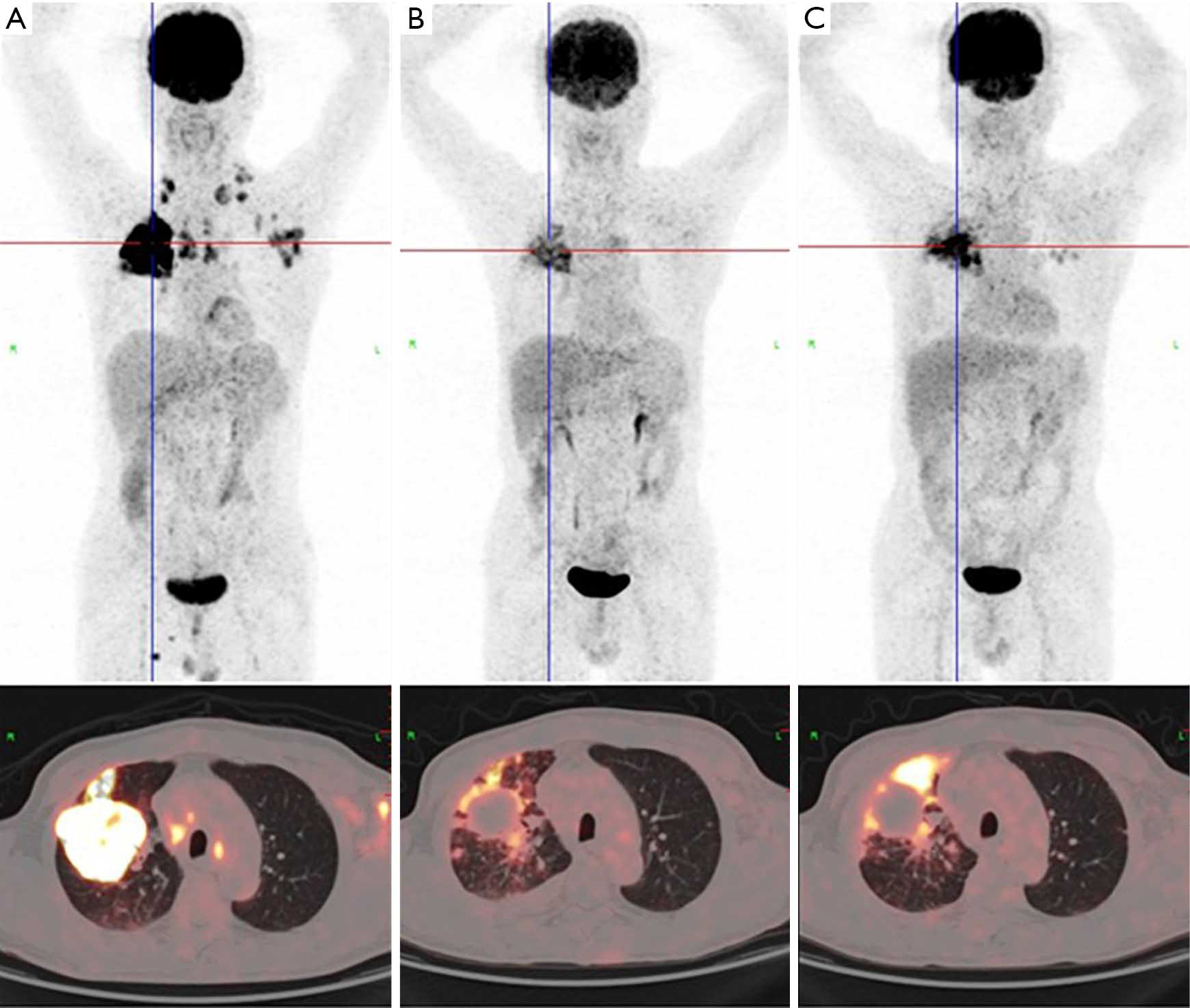 Early evidence showed that for patients without EGFR and ALK/ROS1 mutations, if PD-L1 was positively expressed, platinum-containing dual-drug chemotherapy plus pembrolizumab (KeyNote-189) could be used (8). If the PD-L1 expression level was greater than 50%, pembrolizumab (KeyNote-024 & 042) alone could be used (9,10). The case in the present study was treated with intense stereotactic radiotherapy and maintenance treatment with low-toxicity durvalumab after a trade-off between the efficacy and toxicity of the treatment regimen for double cancers. The regimen not only avoided possible toxic effects but also achieved a sufficient treatment intensity. For this patient’s colon cancer, immunohistochemistry suggested high-risk stage II mismatch repair-proficient (pMMR) colon cancer (pT4 tumor, nerve invasion, incomplete obstruction before the surgery). Platinum-containing dual-drug chemotherapy was recommended based on evidence from past studies. For example, the results of the FoxTROT study suggested that patients with high-risk stage II pMMR colon cancer could benefit from dual-drug chemotherapy (11), and the IDEA study suggested that for patients with high-risk stage II colon cancer, chemotherapy with the CAPOX regimen for 3 months had similar effects as chemotherapy with the CAPOX regimen for 6 months, so it recommended chemotherapy with the CAPOX regimen for 3 months (12).

The patient in this study was given adjuvant chemotherapy with the CAPOX regimen for 3 months. According to the current guidelines, the standardized treatment for colon lesions had been completed. The lung lesion was treated with palliative radiotherapy. After the symptoms were relieved, the patient received sequential maintenance treatment with durvalumab alone. The above treatments were carried out after the patient signed informed consent forms. This patient had high tolerance to this treatment regimen, and the therapeutic efficacy was good. From this case, it can be seen that even if a patient is old, he/she can complete the standardized treatment on the premise of good physical condition. We want to emphasize the following. (I) Although the Chinese and international guidelines all recommend maintenance treatment with pembrolizumab (anti-PD-1 monoclonal antibody) for patients with stage IV non-small-cell lung cancer and positive PD-L1 expression, this patient achieved a good therapeutic effect with maintenance treatment with durvalumab. The progression-free survival and overall survival have reached 6 months, and it is expected that the patient will stay stable. This treatment method undoubtedly opens up a new treatment option for such patients. (II) Durvalumab, as an anti-PD-L1 immune-targeted drug, has a different mechanism of action from that of pembrolizumab and causes milder adverse reactions. According to the PACIFIC study, concurrent chemoradiotherapy and maintenance treatment with durvalumab did not reduce the incidence of pulmonary toxicities of grade 3 and above, reflecting the safety of this drug (7). (III) The present patient had a KRAS mutation. The research team led by Professor Yilong Wu has confirmed that patients with combined KRAS and TP53 mutations had a high rate of strongly positive PD-L1 expression in tumor tissue and an increased number of CD8-positive T lymphocytes infiltrating the tumor microenvironment (13). These mutations have provided a molecular basis for the application of immune-targeted drugs. We believe that the current regimen combing chemoradiotherapy and low-toxicity immune-targeted durvalumab has good application prospects for the individualized treatment of patients with multiple cancers.

As aforementioned, the consensus on MPMN treatment is still lacking. In our opinion, precise staging for each primary cancer serves as the premise in determining the severity of each primary cancer. Accordingly, the local multidisciplinary diagnosis and treatment team should make the treatment decision. Since most MPMN cases are double primary cancers (1,2), we should generally pay more attention to the primary cancer of high severity and poor prognosis. For example, radical surgery will be considered if the primary tumors are localized. Thereafter, if one primary cancer is at early stage and the other one is at advanced stage, adjuvant therapies will be taken into account for the advanced one. However, if both of primary cancers are at advanced stages and they share the common regimens of first-line chemotherapy, this regimen will be selected. If this is not the case, such as this case we report, the regimen of chemotherapy should be firstly taken into account for the cancer with shorter long-term survival, because patients barely bear the toxicities associated with the intensive chemotherapy by using two different duplet regimens. In this situation, topical therapies such as post-operative radiotherapy can be considered to combine with a duplet regimen to improve the clinical outcome of a MPMN patient. But for a MPMN case with metastatic disease from lung, or from the other primary site or from both sites, treatment will be complicated. Much more issues should be considered when making treatment decision, such as patient age, physical agility, indication of chemotherapy, tyrosine kinase inhibitor or immune checkpoint inhibitor, and the opportunity of administrating surgery, radiotherapy or other topical therapies. In this process, if transformed therapy is successfully performed, the status of no evidence of disease will be hopeful to achieve by using topical therapies, such as surgery or radiotherapy. If not, patients should tolerate the regimens, which can ensure the therapeutic response of patients. In general, the final goal of the treatment is improving the clinical outcome of these patients.

Reporting Checklist: The authors have completed the CARE reporting checklist. Available at http://dx.doi.org/10.21037/apm-20-1086

Conflicts of Interest: All authors have completed the ICMJE uniform disclosure form (available at http://dx.doi.org/10.21037/apm-20-1086). The authors have no conflicts of interest to declare.

Ethical Statement: The authors are accountable for all aspects of the work in ensuring that questions related to the accuracy or integrity of any part of the work are appropriately investigated and resolved. All procedures performed in studies involving human participants were in accordance with the ethical standards of the institutional and/or national research committee(s) and with the Helsinki Declaration (as revised in 2013). Written informed consent was obtained from the patient for publication of this manuscript and any accompanying images.