Use of palliative chemotherapy near the end of life: a retrospective cohort study

The issue of near-the-end-of-life (EOL) chemotherapy has recently garnered intense research interest. During their last 30 days of life, 13–43% of patients with advanced cancer are treated using chemotherapy (1-3). One of the indicators of aggressive EOL care is chemotherapy within 14 days of death (4). The drugs available and the indications for the use of palliative chemotherapy treatment (PCT) are constantly growing in number; one example of this is the increased use of targeted therapy and immunotherapies. The Health Service Research Committee of the American Society of Clinical Oncology (ASCO) has stated that treatment can be provided if it improves the quality of life of patients with metastatic cancer, even if it does not improve their survival (5). Psychosocial support, decision-making, symptom management, hospice care, and survival are all considered parts of high-quality EOL care (6-8). However, palliative chemotherapy often carries the risk of adverse events that could negatively impact patients without prolonging their survival (9). The decision to provide palliative chemotherapy near the end of a patient’s life involves balancing clinical benefits with potential harm from side effects. In most countries, EOL treatment for patients with advanced cancer has become increasingly aggressive (10), however, the underlying reasons that contribute to the overuse of palliative chemotherapy are not fully understood (11,12).

We present the following article in accordance with the STROBE reporting checklist (available at http://dx.doi.org/10.21037/apm-20-273).

Data from patients who had died from metastatic or recurrent cancer between April 2007 and June 2019 at the Department of Integrated Therapy in Fudan University Shanghai Cancer Center in Shanghai, China, were retrospectively analyzed. The study was conducted in accordance with the Declaration of Helsinki (as revised in 2013) and was approved by the Institutional Research Ethics Committee of Fudan University Shanghai Cancer Center (NO.050432-4-1911: the registration number of ethics board). Informed consent was taken from all the patients. The inclusion criteria were as follows: patients whose cancer diagnosis information was available in the computerized medical record system at our hospital, patients who had received at least one cancer therapy, and patients who had received palliative chemotherapy as the final cancer therapy.

From each patient, the following data were collected: clinical information (cancer type, Charlson comorbidities, interval between the last chemotherapy treatment and death) and sociodemographic characteristics (family caregivers, gender, and age).

The interval between the last dose of palliative chemotherapy and death was analyzed using the Kaplan–Meier method. Differences in the time of the last PCT between different patient groups (based on age, Charlson comorbidities, caregivers, or cancer type) were examined using the log-rank test. Finally, Cox regression analysis was performed to further investigate the association between PCT and age, Charlson comorbidities, caregivers, and cancer type. The software package R version 3.1.3 was used to perform all the statistical analyses.

Between April 2007 and June 2019, 605 patients died of advanced cancer at the Department of Integrated Therapy in Fudan University Shanghai Cancer Center. Among them, 250 (41.3%) received only the best supportive care during their final year of life, and 355 (58.7%) were treated with palliative chemotherapy in the last year (Table 1).

Cox regression analysis was performed to investigate the relationship between age, Charlson comorbidities, caregivers, cancer type, and the days from the final PCT to death. 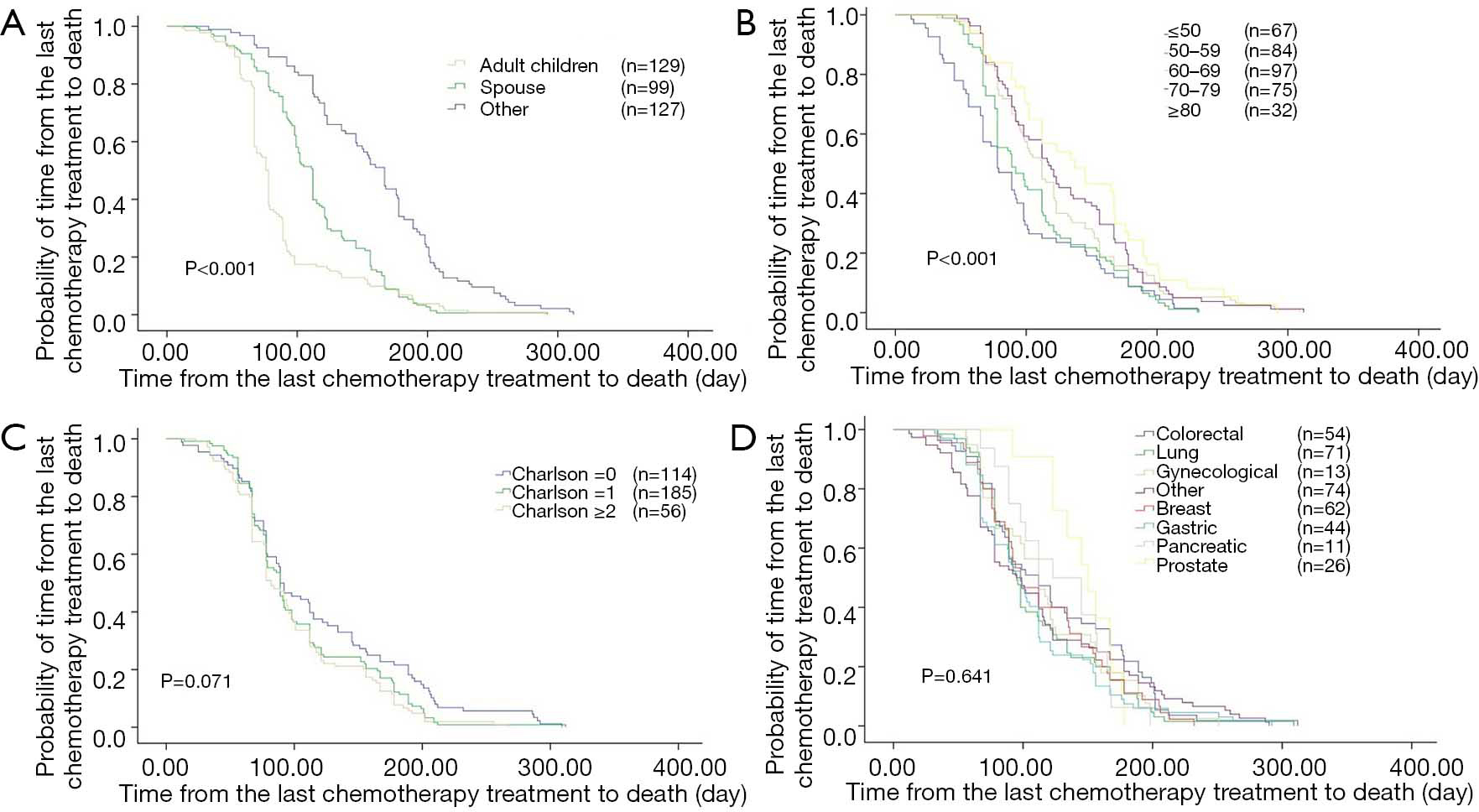 Figure 1 Time between the last dose of palliative chemotherapy and the probability of time from the last chemotherapy treatment to death for (A) different caregiver groups, (B) different age groups, (C) different Charlson comorbidity groups, and (D) different cancer type groups. The caregiver groups and age groups differed significantly in overall comparisons (P<0.001), whereas no significant differences were observed between the Charlson comorbidity groups (P=0.071) or cancer type groups (P=0.641).

Palliative chemotherapy was received by 98 patients (16.2%) during the final month of life. Patients aged 50 years old or younger underwent EOL chemotherapy most frequently (P<0.001). Among the patients, lung cancer was the most frequently diagnosed cancer type (18.4%), compared with other cancer types (P=0.632). Patients with comorbidity represented a higher proportion of patients who received palliative chemotherapy (P<0.05) (Table 2). Multivariate analysis using a logistic regression model revealed age ≤50 years (OR =2.26; 95% CI: 1.84–2.98) was an independent predictor of the administration of chemotherapy (Table 3). 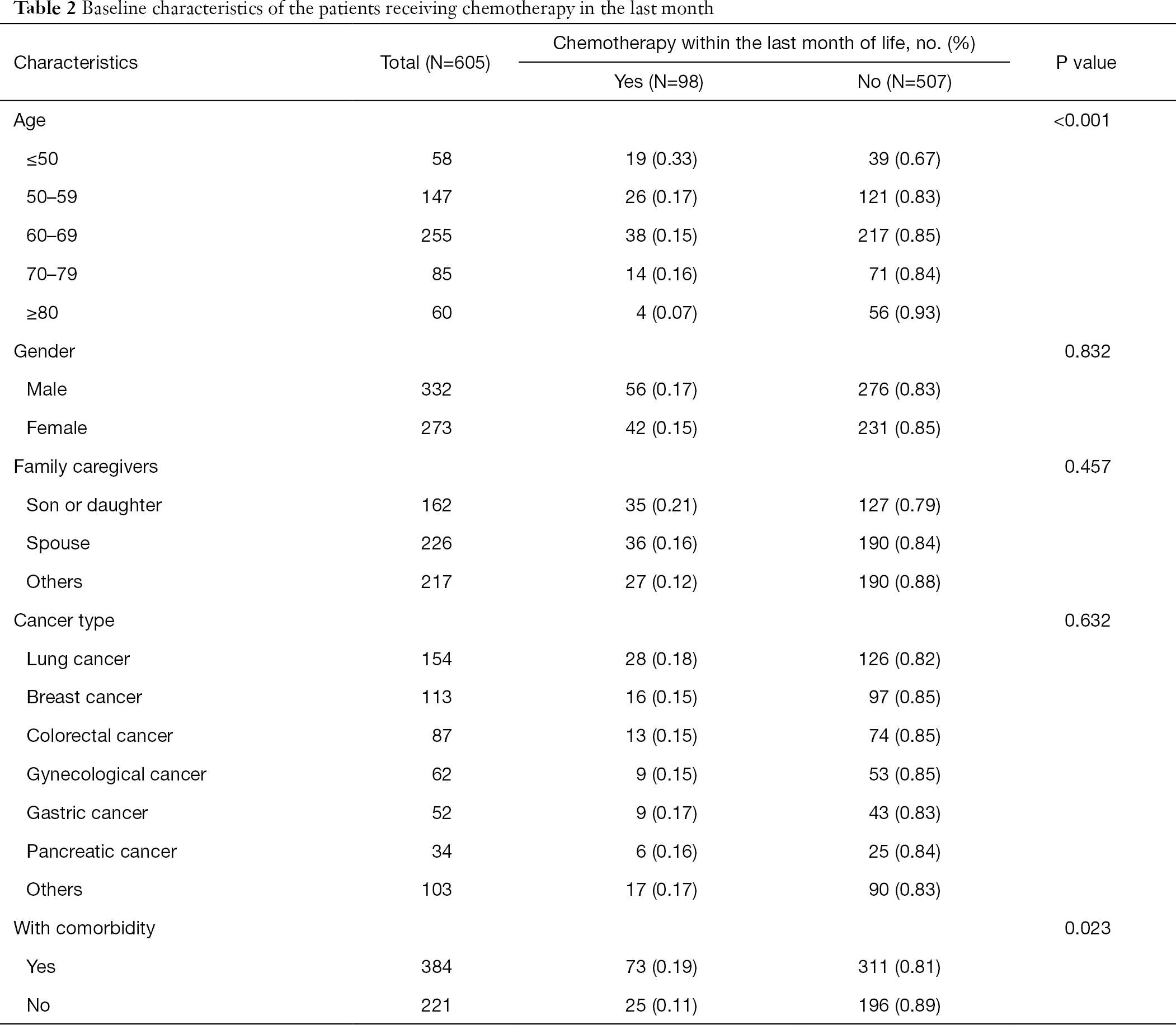 Patients are treated with palliative chemotherapy for several reasons and we also found that EOL palliative chemotherapy hold more disadvantages. First, the physician’s ability to assess a patient’s prognosis has a major role in the final decision as to whether a patient will receive palliative chemotherapy. This is a difficult process that requires the doctor to involve the patient and caregivers in decision-making, including determining when the chemotherapy will start and when it will cease. Families and patients who discuss EOL decisions with their doctors received fewer aggressive medical interventions, including admission to an ICU department or palliative chemotherapy close to death, and the patients have a better quality of life in their final weeks (18,19). So, doctors, patients, and caregivers all play important roles in the decision process of choosing chemotherapy. However, in China, most patients and caregivers do not have sufficient opportunity to discuss the matter with their doctors because many doctors are busy with their daily clinical work and scientific research, and do not feel they have much time to spend in discussion with patients. Moreover, patients and their families sometimes need time to accept the disease prognosis, and they choose to struggle with cancer without a thorough discussion with the doctors.

Second, patients with a survival time >24 months were reported as more likely to be treated with palliative chemotherapy near the end of their lives (20). This might have occurred because the patients trusted in the effectiveness of the treatment and believed that a good-prognosis could be achieved, which might have resulted in unrealistic expectations. Such a situation could influence patients, families, and doctors to use costly and unnecessary drugs that might have potentially toxic side-effects, ultimately increasing anxiety and fatigue, and reducing quality of life for patients (21,22).

The present study showed that younger patients were treated more frequently, which might show that they were closer to death than older patients. The interval between the final dose of chemotherapy and the death of the patient varied significantly with age. When patients with cancer have a long survival time and have received first-, second-, third-, or fourth-line chemotherapy treatments, they might believe they are sensitive to chemotherapy, and may choose to receive palliative chemotherapy in the final year. Younger patients, in particular, usually have fewer comorbidities (Charlson <1) and a good performance status; therefore, they often choose to receive more types of cytotoxic drugs that might result in more difficulty for doctors, the patients, and their families when it comes to ceasing cancer treatments. However, older patients often have a poorer performance status and usually do not wish to be treated using palliative chemotherapy. This might be because older patients have more comorbidities (Charlson ≥2) and would thus be more susceptible to the adverse events of anticancer drugs that do not improve their survival (12). In the present study, the interval between the final dose of chemotherapy and death varied significantly by patient age, but not by Charlson comorbidities.

Family caregivers play a critical role in providing physical and emotional support to patients with advanced cancer (23). Caregivers can help to provide doctors with different perspectives through conversations about when to start or stop chemotherapy near the end of life. Filial piety is considered to be a very important Chinese cultural value that encourages children to try their best to prolong their parents’ lives, irrespective of the cost (24). Confucianism also encourages the decision-making process to be intentionally transferred from the individual to their family members (25). Thus, caregivers help to make final decisions instead of patients themselves, which contrasts with the situation in European countries, where patients usually make their own decisions. In consideration of filial piety, caregivers in China, especially children of the patient, possibly make the choice to receive palliative chemotherapy because they might equate treatment cessation with abandoning hope (26,27). Therefore, patients might endure the side effects of chemotherapy rather than abandoning hope of a cure. This idea is consistent with the results of our study, which showed that the interval between the final dose of chemotherapy and death varied significantly in the adult children caregiver group, in which patients were treated with palliative chemotherapy closer to death than in the spouse caregiver group.

Previous studies have found that factors such as tumor chemosensitivity, family economic status, and educational level are correlated with the use of chemotherapy during the end of life (28,29). Good palliative care guidelines and better communication between doctors, patients, and families could provide guidance when considering aggressive palliative chemotherapy.

The present study has a number of limitations. First, the retrospective nature of the study meant that it had to rely on the accuracy of the hospital records. Second, only data from patients who died in our hospital could be analyzed, meaning patients who died at other hospitals or at home were not included. Finally, other factors that might be associated with palliative chemotherapy, such as quality of life and chemosensitivity, were not considered.

The present study analyzed data from patients who died from metastatic cancer and were treated using palliative chemotherapy in their final year of life between April 2007 to June 2019 in Shanghai Fudan University. Of these patients, chemotherapy was provided to 58.7% of patients with advanced-stage cancer during their final year of life and was provided to 16.2% during their final month of life. The use of palliative chemotherapy in the final year of life varied significantly by patient age and caregiver type. In China, because of cultural factors, the final decision on when to commence palliative chemotherapy at the end of life lies with family members rather than the patients themselves. Chemotherapy does provide clinical benefit but might induce side effects; therefore, doctors, patients and caregivers need to cooperate to determine the best way to balance these considerations. Palliative care guidelines are required to aid decision-making, promote patient-physician communication, and personalize EOL decisions.

Reporting Checklist: The authors have completed the STROBE reporting checklist. Available at http://dx.doi.org/10.21037/apm-20-273

Conflicts of Interest: All authors have completed the ICMJE uniform disclosure form (available at http://dx.doi.org/10.21037/apm-20-273). The authors have no conflicts of interest to declare.

Ethical Statement: The authors are accountable for all aspects of the work in ensuring that questions related to the accuracy or integrity of any part of the work are appropriately investigated and resolved. The study was conducted in accordance with the Declaration of Helsinki (as revised in 2013) and was approved by the Institutional Research Ethics Committee of Fudan University Shanghai Cancer Center (NO.050432-4-1911: the registration number of ethics board). Informed consent was taken from all the patients.