Acute ischemic stroke (AIS) is a common clinical cerebrovascular disease characterized by high morbidity, high recurrence rate, high mortality, and high disability rate. Prompt assessment of AIS patients is critical, and the treatment includes the use of recombinant tissue plasminogen activator (rt-PA), which is the cornerstone of intravascular intervention therapy (1-3). Studies have shown that patients who receive rt-PA via rapid intravenous injection within 3–4.5 h of stroke onset will have a good prognosis (4). However, not all patients can receive help from rapid intervention; thus, determining which patients would benefit is one of the significant challenges for interventional stroke management. Ischemic brain tissue can be divided into the ischemic core, the ischemic penumbra (IP), and benign oligemia (5). IP refers to the ischemic brain tissue surrounding the ischemic core that has not sustained an irreversible injury and can be recovered through prompt intervention (6). Therefore, identifying IP is a current clinical research focus.

In the current study, an onion-like distribution of successively decreasing ADC values was found from IP toward the infarct core (8). Therefore, the ADC value can be used to predict IP.

This study aimed to investigate the value of the apparent diffusion coefficient (ADC) map based radiomics model in the identification of IP in AIS.

We present the following article in accordance with the STROBE reporting checklist (available at http://dx.doi.org/10.21037/apm-20-1142).

This study retrospectively analyzed the data of patients with AIS who were treated in our hospital from January 2014 to October 2019. The study was conducted in accordance with the Declaration of Helsinki (as revised in 2013), and was approved by the Ethics Committee of the Second Affiliated Hospital of Nantong University (No. 2020YL025). The inclusion criteria were as follows: (I) patients aged 18 years or older; (II) patients with first-onset ischemic stroke involving the anterior cerebral circulation which had undergone magnetic resonance imaging (MRI) examination within 24 h of stroke onset and had complete MRI examination data, clinical data and high-quality images (no significant motion artifacts); and (III) patients with the largest lesion size equal to or greater than 1 cm, with the lesion appearing as hyperintensity on diffusion-weighted imaging (DWI) images and decreased ADC values on ADC map. The exclusion criteria were as follows: (I) patients whose CT examination revealed cerebral hemorrhage, intracranial tumor, arteriovenous malformation, or subarachnoid hemorrhage; (II) patients with hemorrhagic transformation in AIS; and (III) patients who received thrombolysis or anticoagulation therapy before MRI.

The data of 315 patients with AIS were collected. After excluding three patients with low-quality images, two patients with incomplete clinical data, eight patients who received thrombolysis or anticoagulation therapy before MRI, 43 patients with hemorrhagic transformation in AIS, and 18 patients with the largest lesion size less than 1 cm, a total of 241 patients were eventually included in this study.

Because of the retrospective nature of the research, the requirement for informed consent was waived.

The collected PWI images were transferred to a postprocessing workstation, Syngo MR Workplace, where they were processed using the Perfusion software package to calculate the cerebral blood volume (CBV), cerebral blood flow (CBF), time to peak (TTP), and mean transit time (MTT) maps. Studies have shown that TTP was the most sensitive indicator of ischemia (9). So the PWI/DWI mismatch model adopted TTP/DWI mismatch. All images were measured by a radiologist with 15 years of experience in neuroimaging diagnosis. The radiologist manually delineated regions on DWI and PWI images and the volume semiautomatic measurement software for measurement. The volumes of abnormal regions on DWI and PWI were obtained using the following formula: volume = total area of abnormal regions on DWI and PWI × (thickness + interslice gap). Refer to the Endovascular Therapy Following Imaging Evaluation for Ischemic Stroke (DEFUSE 3) criteria, we determined that the PWI-DWI mismatch is a volume ratio of a region with a prolonged TTP and a region-restricted with diffusion equal to or greater than 1.8 (10).

The ADC maps of all eligible patients with AIS were imported into the image processing software ITK-SNAP 3.8.0. Refer to the DWI high signal area, two radiologists with more than five years of experience in neuroimaging diagnosis (8 and 13 years) manually delineated the ROI on the slice showing the largest lesion area on each ADC map. Before delineation, the radiologists did not know whether the patients had a DWI-PWI mismatch.

Construction and evaluation of the radiomics model

SPSS 25.0 (IBM Corp.) software was used for statistical analysis of the general data in this study. Measurement data were analyzed for normality, and data conforming to a normal distribution are all expressed as the mean ± standard deviation (). Differences between the two groups were compared using an independent-sample t-test. Categorical and count data are expressed as the number of cases (percentage), and differences between two groups were compared using the χ2 test. P values less than 0.05 were considered statistically significant.

The ICC was used to evaluate the interobserver reliability of the radiomics features extracted by the two radiologists. Features with an ICC ≥0.8 were selected.

General data of the patients

The data were analyzed according to the inclusion and exclusion criteria. A total of 241 patients were eventually included, including 162 male patients and 79 female patients aged 35–93 years, with an average age of 65.5±11.2 years. The statistical results for general clinical data are shown below (Table 1). 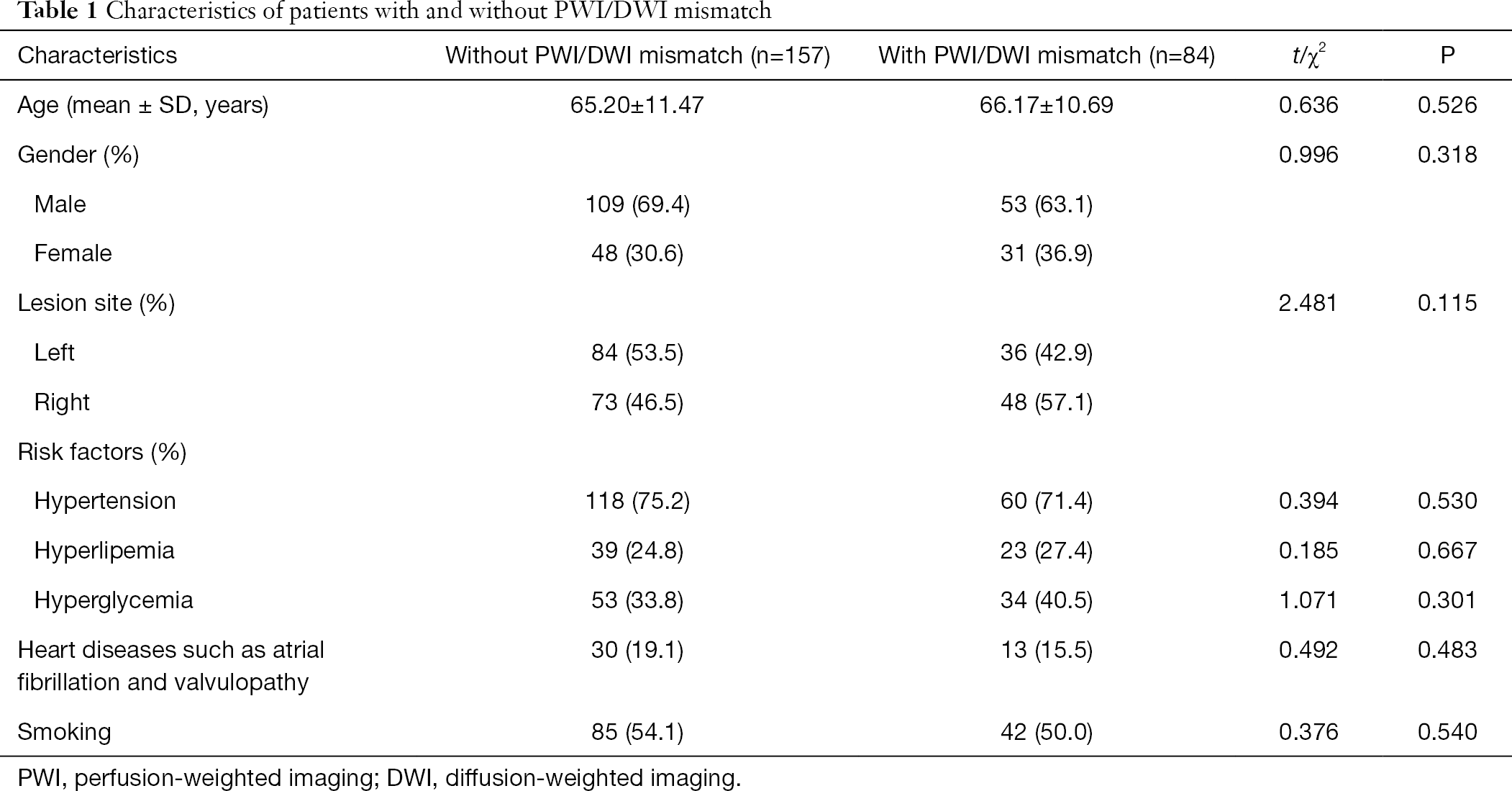 The ICC values of the 896 radiomics features extracted by the two radiologists were in the range of (2.0903e-16-0.99960). This study selected 728 features with an ICC ≥0.80, which showed high stability and interobserver reliability.

Construction of the radiomics model

Firstly, the mRMR method was adopted to screen the 728 features with high stability in the training set. After cutting redundant and irrelevant features, 30 features were kept. Then, the Lasso regression analysis was conducted to choose the optimized subset of features to construct the final model (Figure 1A,B). The lambda values given by the Lasso regression model were screened by 10-fold cross-validation, and the features with a nonzero coefficient were selected under the optimum lambda value for the construction of the radiomics score model (Figure 1C). The final retained features are shown in Table 2. 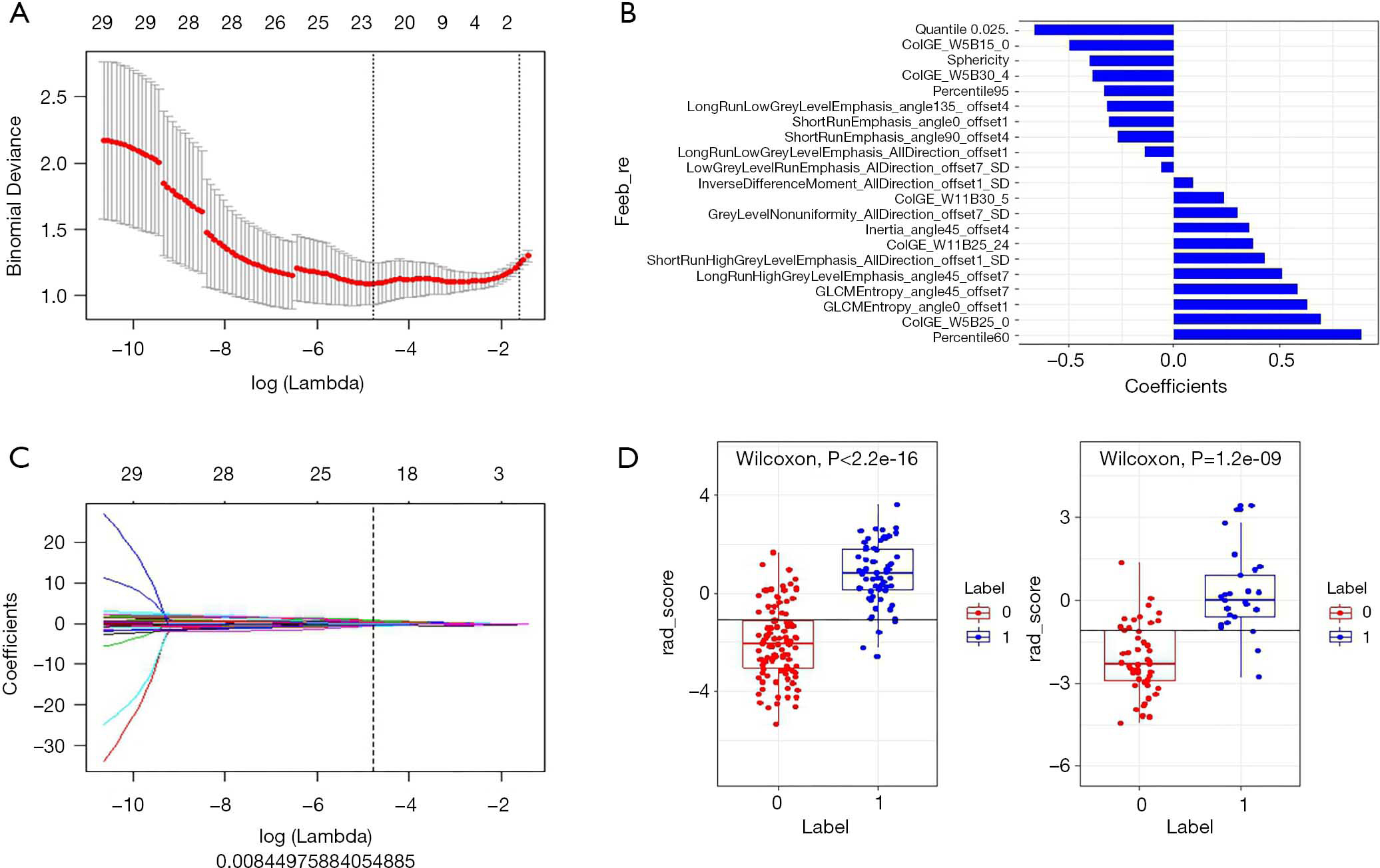 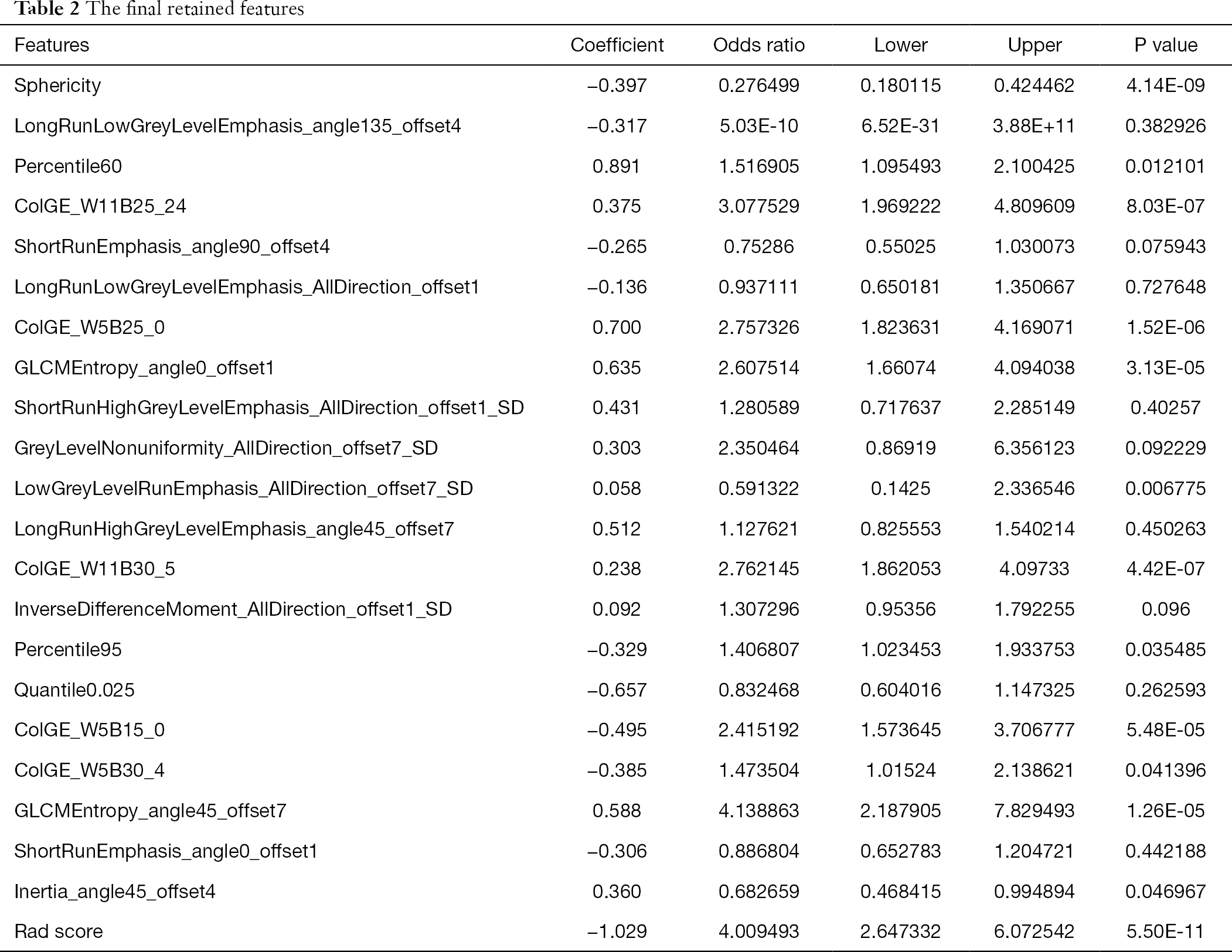 Evaluation of the diagnostic efficacy of the radiomics score model 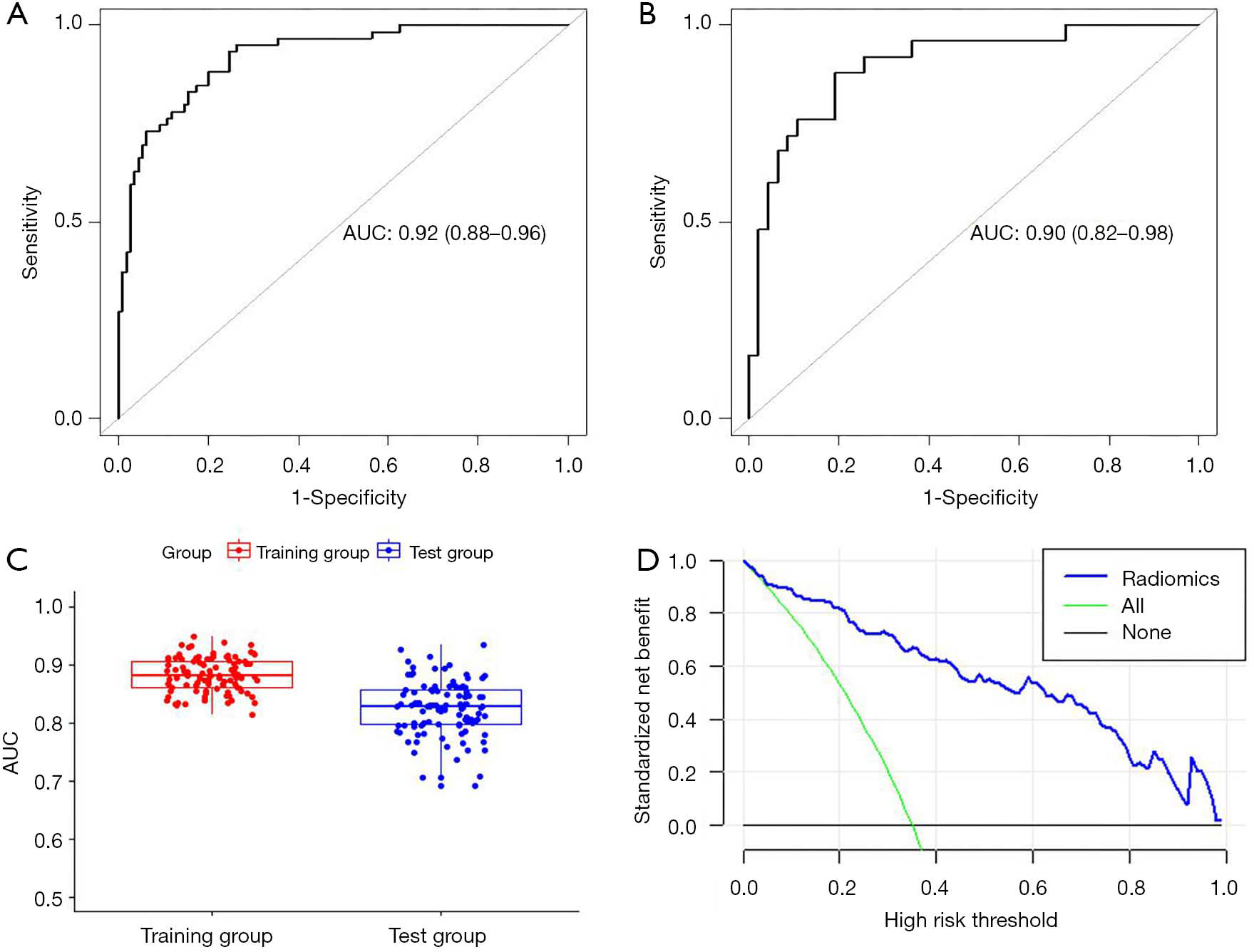 Figure 2 Validation of the model and it’s clinical use. (A) ROC curve of the training set. (B) ROC curve of the validation set. (C) The boxplot shows the results of internal validation by resampling different patients into training and validation groups for 100 times. (D) The decision curve analyzes for the radiomics signature. The y-axis is the net benefit. The black curve means that no patients with PWI/DWI mismatch, the green curve means all patients had PWI/DWI mismatch, while the blue curve represents that during the threshold of 0.08 to 1, the radiomics model gains more net benefit than other two cases. ROC, receiver operating characteristic; PWI, perfusion-weighted imaging; DWI, diffusion-weighted imaging.

Internal cross-validation was performed by resampling different patients into training and validation groups for 100 times and get the average AUC value were calculated to assess the stability of the model (Figure 2C), the mean value of the 100 AUCs and std were 0.88 and 0.03 in the training set and 0.83, 0.05 in the validation set, which means high reliability of the model.

The DCA can help determine the clinical application value of the radiomics score model. DCA showed that within a threshold range of 0.08–1.0, the net benefit of the model is large and that the model can be relatively safely used to predict the presence of PWI-DWI mismatch in patients with AIS (Figure 2D).

Currently, the most used method for IP identification is the PWI-DWI mismatch model (11). PWI has drawbacks such as the need for contrast agent injection, nonuniform parameters, complicated execution, and delayed MRI examination; therefore, its application in clinical practice is limited.

In recent years, studies have shown that regions with decreased ADC values in patients with AIS include not only the infarct core but also the IP, which can be recovered (12,13). A study on rats showed that ADC values could be used to assess the degree of blood supply to brain tissue to determine whether the tissue can be recovered (14). Nagesh et al. analyzed the data of nine patients with AIS within ten h of stroke onset and proposed that the ADC value can potentially identify the IP in patients with acute cerebral infarction (15).

The limitations of the present study are as follows: (I) this study was a single-center retrospective study and lacked multicenter validation. (II) In this study, features were extracted only from the slice showing the largest lesion area in each patient with AIS, the features may not adequately reflect the overall situation of regions with reduced ADCs. (III) In this study, due to limitations of the postprocessing software, TTP maps were used to identify ischemic areas on PWI, and the maps of the time to peak of the residue function (Tmax) with a strict threshold were not selected. Further studies are needed.

In summary, the radiomics model based on the ADC map, can effectively determine the presence of IP in patients with AIS. The model is a simple and practical method that can be applied in clinical practice.

Reporting Checklist: The authors have completed the STROBE reporting checklist. Available at http://dx.doi.org/10.21037/apm-20-1142

Ethical Statement: The authors are accountable for all aspects of the work in ensuring that questions related to the accuracy or integrity of any part of the work are appropriately investigated and resolved. The study was conducted in accordance with the Declaration of Helsinki (as revised in 2013), and was approved by the Ethics Committee of the Second Affiliated Hospital of Nantong University (No. 2020YL025). Because of the retrospective nature of the research, the requirement for informed consent was waived.