Acute pancreatitis (AP) is one of the most common diseases with acute abdominal pain. It is related to diverse causes with complicated pathogenesis and high mortality. When pancreatic enzyme is activated, pancreatic acinars are damaged and a large amount of pancreatic enzymes released to cause pancreatic tissues into self-digest, edema, and bleeding, then leading to local inflammatory reactions (1). Acute inflammatory reaction syndrome can occur in some severe cases, AP is sometimes fatal, with death occurring in 3% of cases (2), which has brought tremendous suffering to patients as well as huge difficulties in clinical diagnosis and treatment (3). AP needed to be diagnosed early so that therapeutic interventions can be carried out in time. Normally, AP is diagnosed based on elevated levels of pancreatic enzymes in the blood or urine, accompanied by abdominal pain and imaging findings (4).

Currently, Diagnosis of AP was based on the presence of at least two of the following three criteria: (I) acute onset of a persistent, severe epigastric pain often radiating to the back. (II) Serum lipase (LPS) activity (or amylase activity) at least three times greater than the upper limit of normal (ULN). (III) Characteristic findings of AP on contrast enhanced computed tomography (CECT) and, less commonly, magnetic resonance imaging (MRI) or transabdominal ultrasonography (5). Combined serum amylase (S-AMY) with LPS detection is frequently used to diagnose AP due to their effectiveness, which is uncorrelated with pancreatitis severity. Research in recent years has pointed out that LPS is an indicator with a higher sensitivity and specificity than S-AMY, which can be used alone to detect AP (6).

C-reactive protein (CRP) is an acute phase reaction protein, which has a little content in a healthy human. However, its content will rapidly increase in the case of infection and inflammation (7). When the body’s inflammation or damage is reduced, its concentration also drops accordingly. And long-term high CRP level generally indicates poor prognosis for patients (8).

Nowadays, the laboratory examination of AP is mostly combined detection of serum LPS and S-AMY. This research was thereby carried out aiming to compare the sensitivity and specificity of serum LPS, S-AMY and CRP in the diagnosis of AP. Then evaluating the value of these indicators in clinical diagnosis of AP. Meanwhile, detection expense for patients admitted with acute abdominal pain were also evaluated. Above all, according to the laboratory hematology examination, we aimed to investigate whether hematological parameters LPS, S-AMY and CRP have an important initial clear diagnosis in the differential diagnosis. The initial diagnosis of AP gives clinicians a clear diagnosis and treatment direction, and active treatment is of great significance in improving the patients’ prognosis, reducing economic pressure, saving medical resources, and so on.

In the study, there were 212 patients with acute abdominal pain admitted to the hospital from 2014 to 2016, 143 males/69 females, the ages between 17–87 years old. According to the guidelines for the diagnosis of AP (5), we combined with clinical symptoms of patients: abdominal pain and vomiting, laboratory tests: serum trypsin (S-AMY or LPS) increased three times higher than normal, and CT results to diagnose AP. AP was divided into the following categories: (I) gallstone pancreatitis: founding gallbladder stones or intrahepatic bile duct thickening, enhancement, biliary ascariasis through imaging tests. (II) Alcoholic pancreatitis: drinking caused AP or has a history of alcoholism (male: the amount of alcohol >40 g/day, female: the amount of alcohol >20 g/day, and wine storage time ≥5 years or the average drinking accuracy in the last 2 weeks was 80 g/days), it has the lack of other obvious evidence of the disease (5). (III) Hyperlipidemia pancreatitis: the level of serum triglyceride >11.3 mmol/L, or the serum is opaque, the level of serum triglyceride is between 5.65 and 11 mmol/L, with no any other pathogenic factor obviously (9). (IV) Idiopathic pancreatitis: with no determined factors after clinical, imaging studies, biochemistry, etc. (10). One hundred and seven patients were diagnosed with AP, with 78 males/29 females, ages between 21–86 years old, the patients average age is 49.2±16.85 years old; 105 patients were diagnosed with non-AP, containing 65 males and 40 females, ages between 17–87 years old, the patients average age was 47.6±15.02 years old. The data collected was comparable, there was no significant difference in AP group and non-AP group (P>0.05). All the laboratory tests were completed within 12 hours after hospitalized. Meanwhile, the cases more than 24 h on the admission day were taken out. Our study was conducted in accordance with the Declaration of Helsinki (as revised in 2013). The study protocols were approved by the ethics committee of the First Affiliated Hospital of Xinjiang Medical University (approval No. 20140828-02) and received informed consent from all subjects.

Separating detection of the levels of pancreatic enzyme (S-AMY or LPS) cost 15 RMB, and the detection of AP (S-AMY and LPS) cost 30 RMB and the CRP test cost 20 RMB respectively.

All data analysis was using SPSS 22.0. The non-parametric data was expressed by median, parametric data was expressed by mean ± standard deviation (SD). Variance analysis was used for two groups’ differences. Calculating the sensitivity and specificity of LPS, S-AMY, CRP respectively, and make a comparison of them. P<0.05 indicated statistical significance.

The serum levels of LPS, S-AMY and CRP

The sensitivity and specificity of LPS, S-AMY, CRP in AP group

The sensitivity and specificity of the LPS in diagnosing AP were 91.6% and 90.5%, S-AMY was 70.1% and 91.4%. CRP was 59.8% and 56.2%, respectively. To compare the sensitivity and specificity of LPS, S-AMY, CRP in the early diagnose of AP group, we discovered the sensitivity of LPS, which was obviously higher than S-AMY and CRP (P<0.01),the specificity of S-AMY was slightly higher than LPS, there was no significant difference between them(P>0.05) (details shown in Table 2). In addition, compared with the trend of serum LPS expression, the expression trend of S-AMY was positively correlated (r=0.81) (Figure 1). While there was no correlation with the trend of CRP expression (Figure 2). 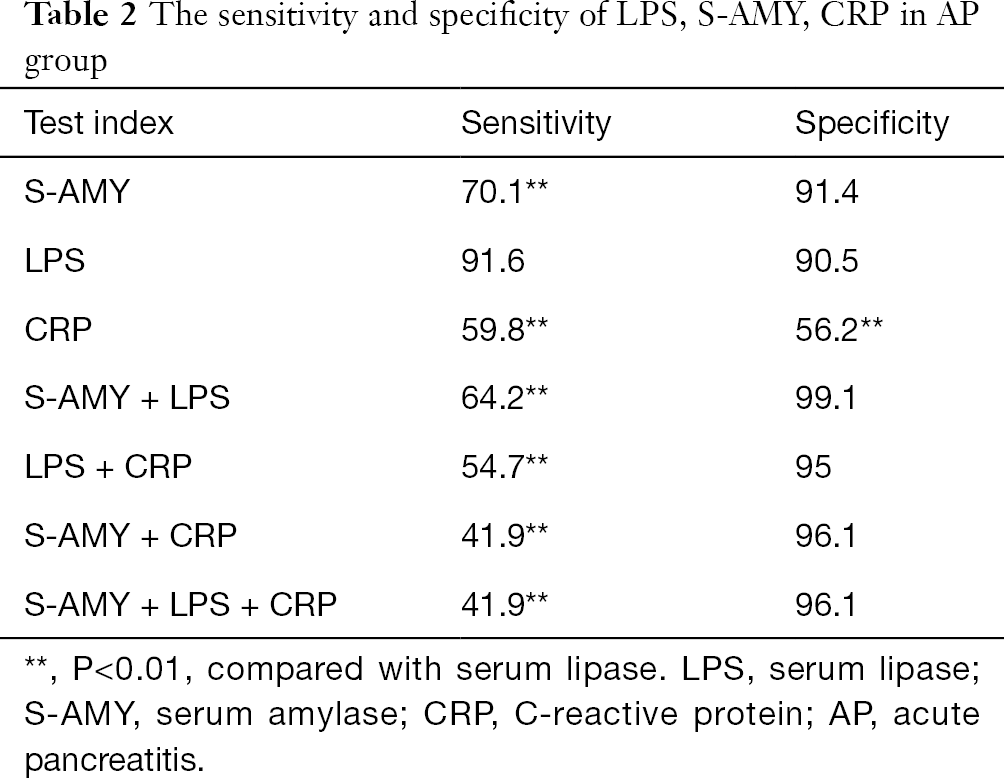 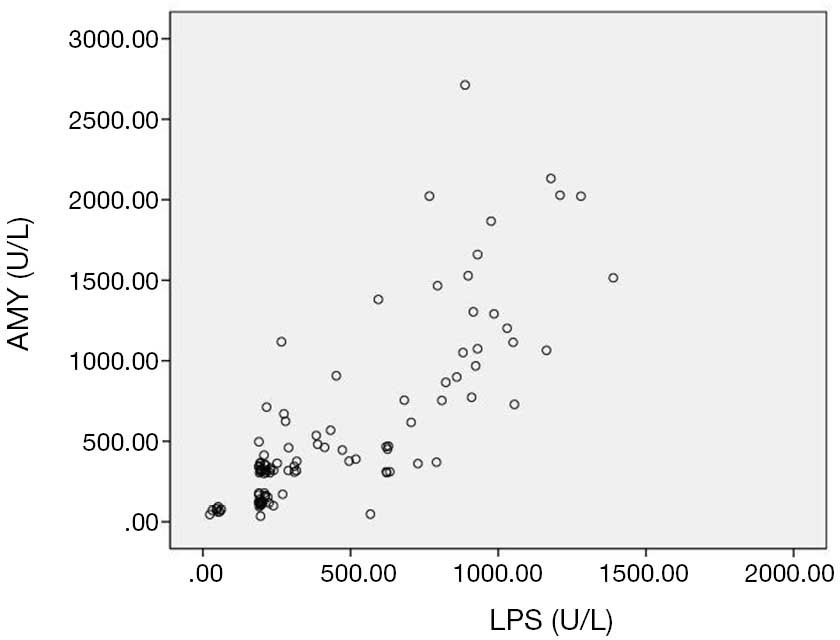 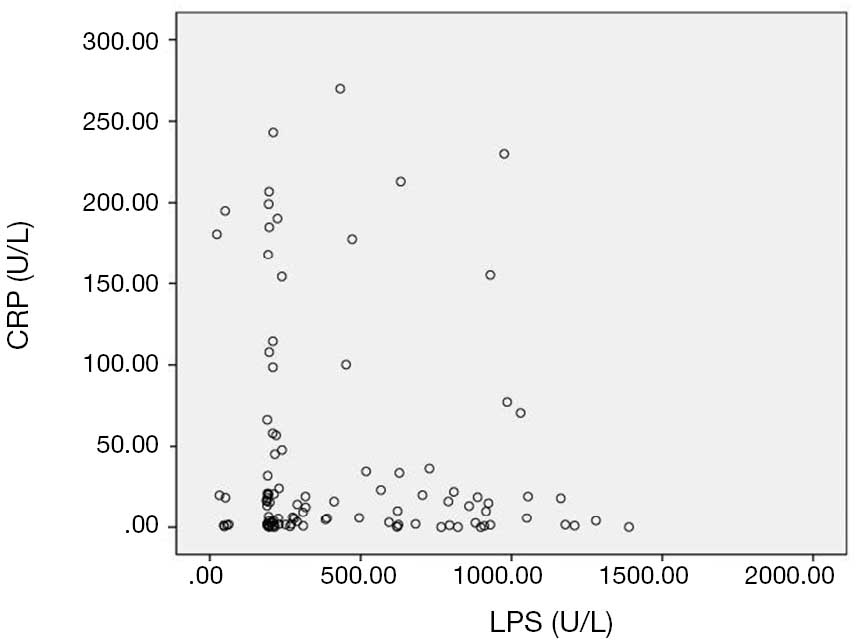 It cost 50 RMB when test was combined in LPS, S-AMY and CRP, test of LPS individually cost only 15 RMB. Two hundred and twelve patients with acute abdomen could be tested LPS individually which could save 7,420 RMB in our study.

Early clinical diagnosis is the most important in treatment of acute abdomen patients. However, research discovered that the accurate diagnosis rate of acute abdomen patients is only 47–76%, while delayed diagnosis will increase the morbidity and mortality in patients (11). AP is one of the common acute abdomens, which manifests as persistent upper abdominal pain, accompanying with discomforts like abdominal distention, nausea and vomiting. Mild cases are dominated by local pancreatic inflammatory reaction, while severe cases may be accompanying with organ dysfunction. Therefore, it’s crucial importance to clinical treatment to search for a suitable detection index that can timely and accurately diagnose AP.

At present, S-AMY as the detection index most commonly is used in diagnosing AP. S-AMY can secrete specific subtype via salivary gland (s-amylase) and pancreas, which has the main function of digesting starch, glycogen and related polysaccharide (12). S-AMY has extensive sources, which can be elevated in acute abdomens such as parotitis, cholecystitis and peptic ulcer. Therefore, the specificity of S-AMY in diagnosing AP is not high (13). S-AMY rises rapidly in 3–6 h after onset of AP, with a half-life of 12 h. It can return to normal concentration within 24 h, which has greatly reduced value as a clinical early diagnosis index (12). LPS is synthesized in pancreatic acinar cells, which plays a vital role in lipolysis. LPS concentration in pancreas is 100-fold higher than that in tissues such as duodenum, stomach and lung. Generally, LPS will increase 3–6 h after onset of AP, LPS as the preferred serological test for the diagnosis of pancreatitis and a cut-off level of three or more times the ULN is often quoted. which peaks at 24 h (12,14). Different from S-AMY, LPS can be reabsorbed by renal tubule. Consequently, elevation in LPS concentration can last for 8–14 days, indicating greater value of LPS than S-AMY in diagnosing AP when the duration of disease is more than 24 h (12). It was found in this research that, the level of S-AMY and LPS in AP patients was higher than that in non-AP patients with the difference being statistically significant (P<0.01).

CRP belongs to nonspecific acute phase reactive protein, the concentration will increase AP idly when tissue damaged or inflammatory stimuli occur in the body (19). Some research has been proved that CRP as a component of the nonspecific immune mechanism can play a role on innate immunity, which mainly take part in the inflammatory defense of organism. Its synthesis is generated by IL-1 and IL-6 released in bodies, blood level begins to rise after 6 h abdominal pain attacks, the peak value will be reached after 3 days, the half-life will be reached almost after 19 h (20). The Sensitivity and specificity were only 59.8% and 56.2% of CRP to diagnose AP. The joint detection with LPS and S-AMY, the specificity could be 96.2%, there were no significant difference between test LPS alone (P>0.05). This indicates that CRP has low sensitivity and specificity to diagnose AP, which could not diagnose AP alone because of the low accuracy of diagnosis. It has the value to improve the accuracy of AP when it combines with LPS and S-AMY.

S-AMY is more widely used compared to LPS in diagnosis of AP. Generally, these two indicators are combined in clinical practice. However, the diagnostic value of LPS was higher than S-AMY and CRP from the outcomes in this study. Hence, it’s not of significance for a combined detection of the three indicators. Two hundred and twelve patients were admitted with acute abdominal pain in our center, a total of 107 AP patients was enrolled, there were no patients with only increased S-AMY or CRP but normal LPS. In view of cost evaluation, it cost 50 RMB in combined detection of the three indicators, while it cost 15 RMB in LPS detection. If only LPS was detected in 212 cases of acute abdomen, 7,420 RMB would be saved, which could reduce the waste of resource and save the cost of detection for patients. Compared to imaging examination, detection of LPS is convenient, rapid, cheap, and free from radiation contacting.

In our further study, patients with a preliminary diagnosis of AP will be staged according to the Atlanta 2012 revised standard for the severity of patients with AP. We will evaluate the relevant hematological parameters (such as IL-6, PCT, LDH, etc.) that have now caused heated discussion and widespread attention. Aiming to investigate whether there is higher value of those hematological parameters for the diagnosis of severe AP. The morbidity and mortality of AP are extremely high, early diagnosis, clear etiology, and searching for effective disease evaluation indicators are important to improve AP prognosis and reduce mortality. Although there are many scoring systems and related examinations for the severity and prognosis of AP, it is not clear which is the most effective. The advantages of simple and rapid hematological parameters detection make it continue to be a research hotspot for clinical diagnosis and prognosis evaluation.

Conflicts of Interest: All authors have completed the ICMJE uniform disclosure form (available at http://dx.doi.org/10.21037/apm-20-160). The authors have no conflicts of interest to declare.

Ethical Statement: The authors are accountable for all aspects of the work in ensuring that questions related to the accuracy or integrity of any part of the work are appropriately investigated and resolved. Our study was conducted in accordance with the Declaration of Helsinki (as revised in 2013). The study protocols were approved by the ethics committee of the First Affiliated Hospital of Xinjiang Medical University (approval No. 20140828-02) and received informed consent from all subjects.