Recently, large epidemiological studies have shown an association between H. pylori seropositivity and COPD. Specifically, previous findings revealed that H. pylori IgG levels correlated with the severity of COPD (7). Conversely, a population-based cross-sectional study reported no association between H. pylori exposure and COPD, measures of allergic disease, or decline in lung function (8). These results support our previous study of a population with high H. pylori infection rates that demonstrated no relationship between COPD and H. pylori seropositivity (9). However, a meta-analysis that consisted of 16 studies suggested that H. pylori infection was associated with an increased risk of COPD [odds ratio (OR) 2.07, 95% CI: 1.81–2.36, P=0.05] (10).

We present the following article in accordance with the STROBE reporting checklist (available at http://dx.doi.org/10.21037/apm-20-850).

We conducted this retrospective cohort study using the Gene-Environment of Interaction and phenotype (GENIE) data. The GENIE cohort consisted of participants who had visited Seoul National University Gangnam Center in South Korea for health checkups, agreed to participate in genetic studies, and donated blood samples (11).

Data were obtained from 2004 to 2015 in adults at least 40 years old, and the clinical information was collected including age, sex, height, weight, comorbidities, smoking status, spirometric and laboratory data, and esophagogastroduodenoscopy (EGD) results. Spirometry and H. pylori-specific IgG concentrations were measured annually for up to 12 years. Smoking-related variables were obtained by questionnaire. Patients who had undergone at least one H. pylori IgG test and who had spirometry for more than two years were included in the study. We excluded patients who were diagnosed with lung cancer during the follow-up period or who underwent pulmonary resection. Spirometry was performed according to the standard guidelines of the American thoracic society (12).

H. pylori-specific IgG concentrations were measured using two different tests depending on the study year. A commercially available enzyme-linked immunosorbent assay (RADIM, Pomezia-Rome, Italy) was used according to the manufacturer’s protocol prior to April 2013. We included only positive (≥30 U/mL) or negative (<15 U/mL) results in this analysis excluding equivocal results (15–30 U/mL). H. pylori-specific IgG concentrations were measured with HPG kits (Immulite 2000 Chemiluminescent Microparticle Immuno Assay SIEMENS, UK) from April 2013 until the end of the study. H. pylori IgG levels higher than 1.10 IU/mL were regarded as positive, and values that ranged from 0 to 0.9 IU/ mL were considered negative in the Immulite 2000 assay. We defined a recently infected person as a subject whose H. pylori-specific IgG value changed from negative to positive during the follow-up period.

Using the baseline H. pylori-specific IgG concentrations, we determined whether H. pylori seropositivity was associated with the incidence or development of COPD. COPD was defined as a prebronchodilator FEV1/forced vital capacity (FVC) ratio of <0.7. We also compared the annual FEV1 or FVC reduction rates of seropositive and seronegative subjects.

Moreover, the difference in the rate of decline in pulmonary function of seropositive patients was evaluated by stratifying the patients into two groups: (I) the H. pylori-treated group and (II) the non-treated group. The treated group included the patients who completed the course of eradication regimen drugs such as a proton pump inhibitor (PPI), clarithromycin, and amoxicillin.

A subject whose H. pylori-specific Ig G value changed from negative to positive during the follow-up period was defined as a recently infected person.

The present study was approved by the Institutional review board (IRB No. H-1804-028-934) and was in accordance with the 1964 and later modifications of the Helsinki declaration (as revised in 2013) on the use of human subjects for research. Written informed consent was obtained from the patient before GENIE cohort registration. 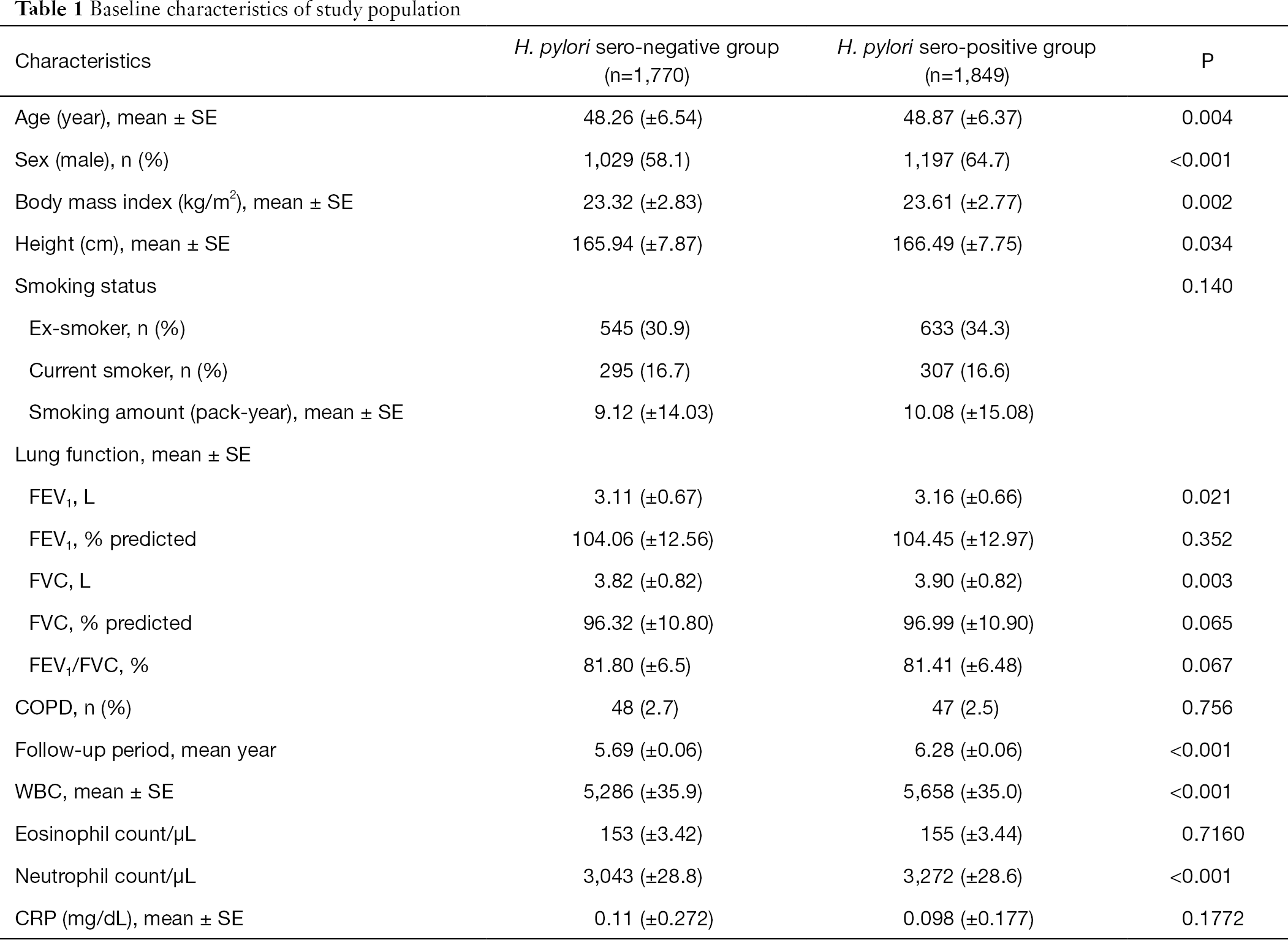 The initial spirometry revealed that a total of 95 (2.6%) patients had COPD; however, the prevalence of COPD did not differ according to the seropositivity for H. pylori (2.5% in seropositive group vs. 2.7% in seronegative group; P=0.756). Although 76 patients (2.1%) were newly diagnosed with COPD during the total observation period, there were no significant differences in the development of COPD between the seropositive group (37 patients, 2.0%) and the seronegative group (39 patients, 2.2%) (P=0.728).

The impact of H. pylori infection on the rate of decline in lung function

The impact of eradication on the decline of lung function

Table 4 The annual decline rates of lung function according to medical eradication for H. pylori during follow-up period among the patients with sero-positivity to H. pylori Ig G
Full table

This study presents some strengths compared with previous reports on the association between H. pylori infection and COPD. First, this was a large-scale population cohort study with a long follow-up period in a high prevalence area of H. pylori infection. Secondly, the study population, GINIE cohort, consisted of a health screening population and followed an organized system that resulted in a low dropout rate. Numerous publications have already demonstrated the data quality of the study population. This suggests that the longitudinal data in this study may contain fewer biases such as the high drop-out rates seen in retrospective cohort studies. Furthermore, the effects of the eradication treatment of H. pylori infection were examined on main outcomes. To date, no studies have confirmed whether the rate of lung function is affected with H. pylori eradication.

As for the physical characteristics of study population compared with previous reports (16-18), even though H. pylori seropositive group showed statistically higher values in age, BMI, and height, the absolute difference in each variable seems to be too small to suggest clinical significance in general population and some studies reported that the effect of H. pylori infection on height disappeared after a multivariate analysis (16,17,19,20). Male predominance in the H. pylori seropositive group appeared in this study, similar to several large sample studies that have reported that men were more positive on serum or biopsies than women (21,22).

Currently, Sze et al. reported the most extensive study including patients with COPD in a lung health study (LHS) on the relationship between H. pylori seropositivity and COPD (7). With the observation over 11 years, they showed that the absolute FEV1 value in seropositive patients was lower than that in seronegative patients even though the relationship disappeared when the FEV1 (% predicted) value was used. The authors asserted that H. pylori infection was associated with reduced lung function related to the effects of the bacterium on lung growth earlier in life and systemic inflammation. Contrary to the report, our study did not show any significant difference in the rate of lung function (both absolute value and % predicted value) in the seropositive population. Furthermore, although not statistically significant, a slower rate of decline in FEV1 was observed in the seropositive group (P=0.08).

However, we should consider some different aspects in both studies. First, our study enrolled a healthier general population. The baseline lung function was higher in this population and only 2.6% of total subjects had COPD at the enrollment (mean FEV1 2.54 L, 83.87% predicted), while the analysis report of LHS targeted mild to moderate COPD patients (mean FEV1 2.80 L, 78% predicted) (7). Therefore, even the impacts of H. pylori infection may present, the influence on the total lung function may be limited or negligible in a healthier population than in established COPD. Another point is the difference in seropositivity in the study population. As shown in this study, the seropositivity of H. pylori was so prevalent that more than half of the population had a current or past infection of H. pylori, a rate much higher than the 18% reported in the LHS study.

The induction of systemic inflammation by H. pylori was proposed as the mechanism underlying the association between COPD and H. pylori infections. The infection can trigger a low-grade inflammatory state, including the type 1 helper immune response and suppression of the type 2 T helper cell immune response (23). This polarized T-helper cell response has explained the relatively low prevalence of asthma and the high prevalence of COPD in this seropositive population. In addition, recently, studies are focusing on the effects of H. pylori on the intestinal microbiome (24). However, in a high prevalence area, the inflammation related to H. pylori may present such a weak or common signal that it may not be a major contributor to reduce lung function.

In this study, for the first time, we evaluated the effects of eradication of H. pylori on changes in lung function. However, the effect was not significant. This may suggest that the other factors including subsequent inflammation, are more critical rather than the initial H. pylori infection itself. However, as the main results were negative and the detailed inflammatory markers except CRP were not available in this study, further analysis and interpretation could not be performed.

Despite the interesting findings of this study, some limitations should also be considered. First, we considered the limitation of seropositivity in detecting current infection of H. pylori and the discrepancy with results using endoscopic biopsy samples (9,25). Unfortunately, endoscopic biopsy results of H. pylori were not available in the current study. Second, the study population may be relatively young to analyze more COPD patients considering that the prevalence of COPD increases with age (26) and other association studies (10,27).

In the present study using health screening general population, seropositivity defined infection or the eradication treatment of H. pylori were not associated with the decline of lung function or progression to COPD. H. pylori infection may not be a significant factor contributing to deteriorating lung function.

Reporting Checklist: The authors have completed the STROBE reporting checklist. Available at http://dx.doi.org/10.21037/apm-20-850

Conflicts of Interest: All authors have completed the ICMJE uniform disclosure form (available at http://dx.doi.org/10.21037/apm-20-850). The authors have no conflicts of interest to declare.

Ethical Statement: The authors are accountable for all aspects of the work in ensuring that questions related to the accuracy or integrity of any part of the work are appropriately investigated and resolved. The present study was approved by the Institutional review board (IRB No. H-1804-028-934) and was in accordance with the 1964 and later modifications of the Helsinki declaration (as revised in 2013) on the use of human subjects for research. Written informed consent was obtained from the patient before GENIE cohort registration.