Successful treatment of a patient with non-small cell lung cancer and interstitial lung disease with durvalumab: a case report

Immune checkpoint inhibitors (ICIs) have changed the landscape of treatment for a number of cancers, including non-small cell lung cancer (NSCLC) (1). Several PD-1/PD-L1 inhibitors including nivolumab, Pembrolizumab and atezolizumab has exhibited better survival with a less toxic profile than docetaxel in second line therapy in NSCLC patients. PD-1/PD-L1 inhibitors combined with chemotherapy or other ICIs has also been approved as first-line treatment for NSCLC patients without oncogenic drivers (2). Although ICIs can effectively achieve the desired antitumor effect by activating the immune system, they also carry the risk of immune-related adverse events (irAEs), including inflammation in various organs (3,4). Pneumonitis, a rare but potentially life-threatening condition, is defined as focal or diffuse inflammation of the lung parenchyma. Previous studies have shown that the incidence of ICIs related pneumonitis ranges from 1% to 12% in advanced NSCLC patients (5). The mechanism behind irAEs is still unclear, but prior lung disease is a possible a risk factor of pneumonitis induced by ICIs (6).

Interstitial lung disease (ILD), which is characterized by damage to the lung parenchyma caused by inflammation and fibrosis, is common among smokers (7). Approximately 10% of NSCLC patients are diagnosed with ILD (8,9). Because of the increased risk of pneumonitis, patients with ILD have been excluded from clinical trials involving ICIs. The safety and efficacy of ICIs for treating patients with ILD are not clear.

Durvalumab is a selective, high-affinity, engineered, human IgG1 monoclonal antibody that blocks PD-L1 binding to PD-1 and CD80, which has approved to treat stage III NSCLC, extensive-stage SCLC and Urothelial carcinoma. In PACIFIC study, durvalumab showed durable efficacy and well tolerance in patients with stage III, unresectable NSCLC who did not have disease progression after concurrent chemoradiotherapy. Pneumonitis in patients who received durvalumab was mostly low grade, and the incidence of clinically important grade 3 or 4 events was lower than that in other studies in the same disease context (10). Taken together, durvalumab maybe safety in NSCLC patients with ILD. Here, we report a patient with lung squamous cell carcinoma and ILD who received durvalumab. The patient achieved a good response and experienced no irAEs during more than two years of treatment. We present the following case in accordance with the CARE reporting checklist (available at http://dx.doi.org/10.21037/apm-20-1134).

A 77-year-old man was sent to our hospital with a painless mass on the right thigh. The mass measured about 3 cm × 4 cm, and there was no redness or ulceration (Figure 1). Ultrasound-guided biopsy of the mass showed squamous cell carcinoma infiltration in the fibrous tissue, Immunohistochemistry (IHC) showed CK (+), p63 (+), Ki-67 (+40%), CK5 (+), p40 (+), and Vimentin (−). Metastatic squamous carcinoma was considered. The patient then underwent fluorine-18-fluorodeoxyglucose positron emission tomography/computed tomography (18F-FDG-PET/CT) examination, which showed cancer in the right lower lung, with intramuscular metastases at multiple sites and lymph node metastasis in the mediastinum and mesenteric space (Figure 2). The patient was consequently diagnosed as stage IV lung squamous carcinoma. Chest CT showed reticular opacity and traction bronchiectasis of the bilateral lung, and the diagnosis of ILD was confirmed (Figure 3). The patient had a 30-year history of smoking and no family history of cancer. 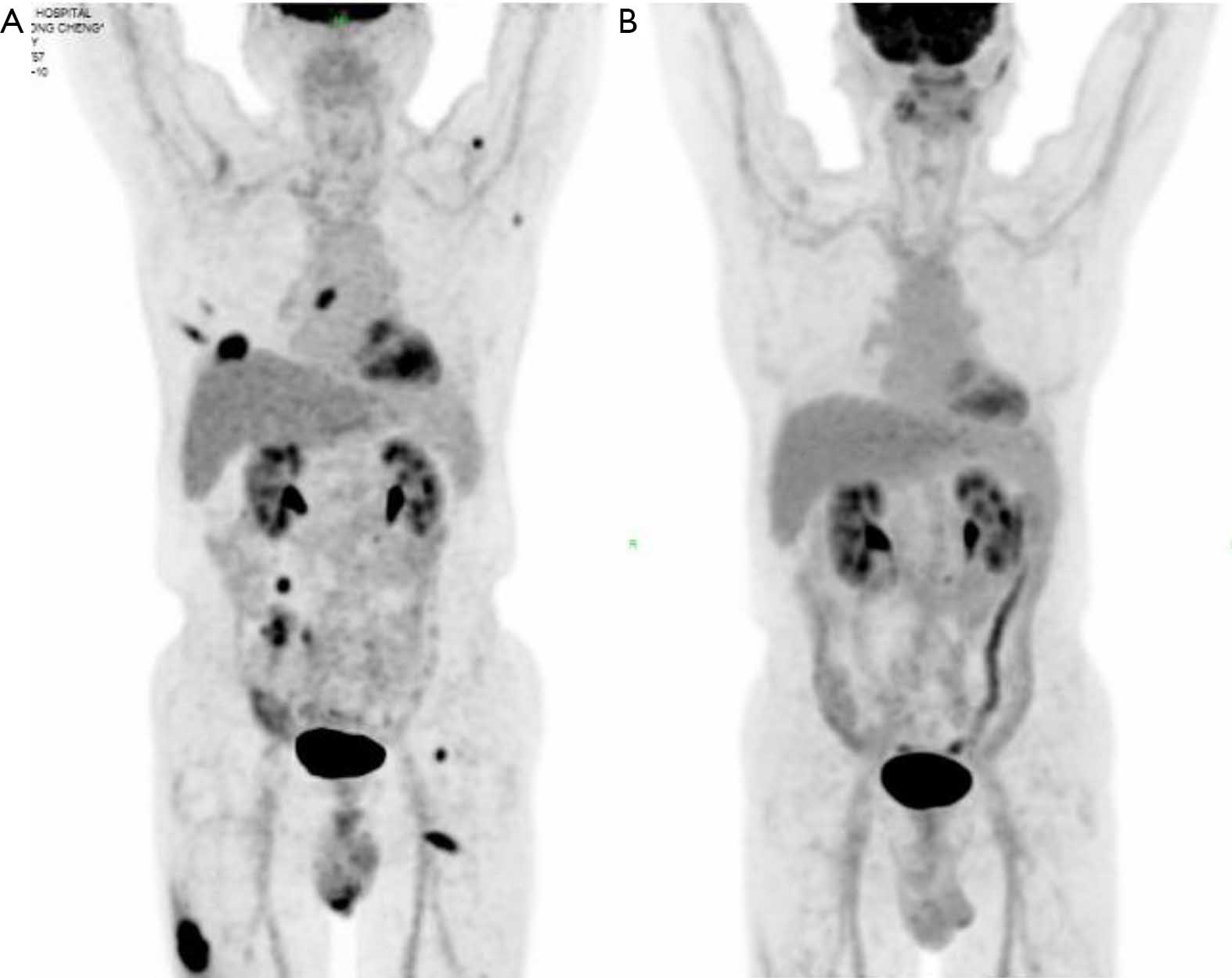 Figure 2 Fluorine-18-fluorodeoxyglucose positron emission tomography/computed tomography (18F-FDG-PET/CT) of multiple tumors. (A) PET/CT revealed cancer in the right lower lung, with intramuscular metastases at multiple sites and lymph node metastasis in the mediastinum and mesenteric space; (B) 18 months later, PET/CT showed no evidence of the tumor. 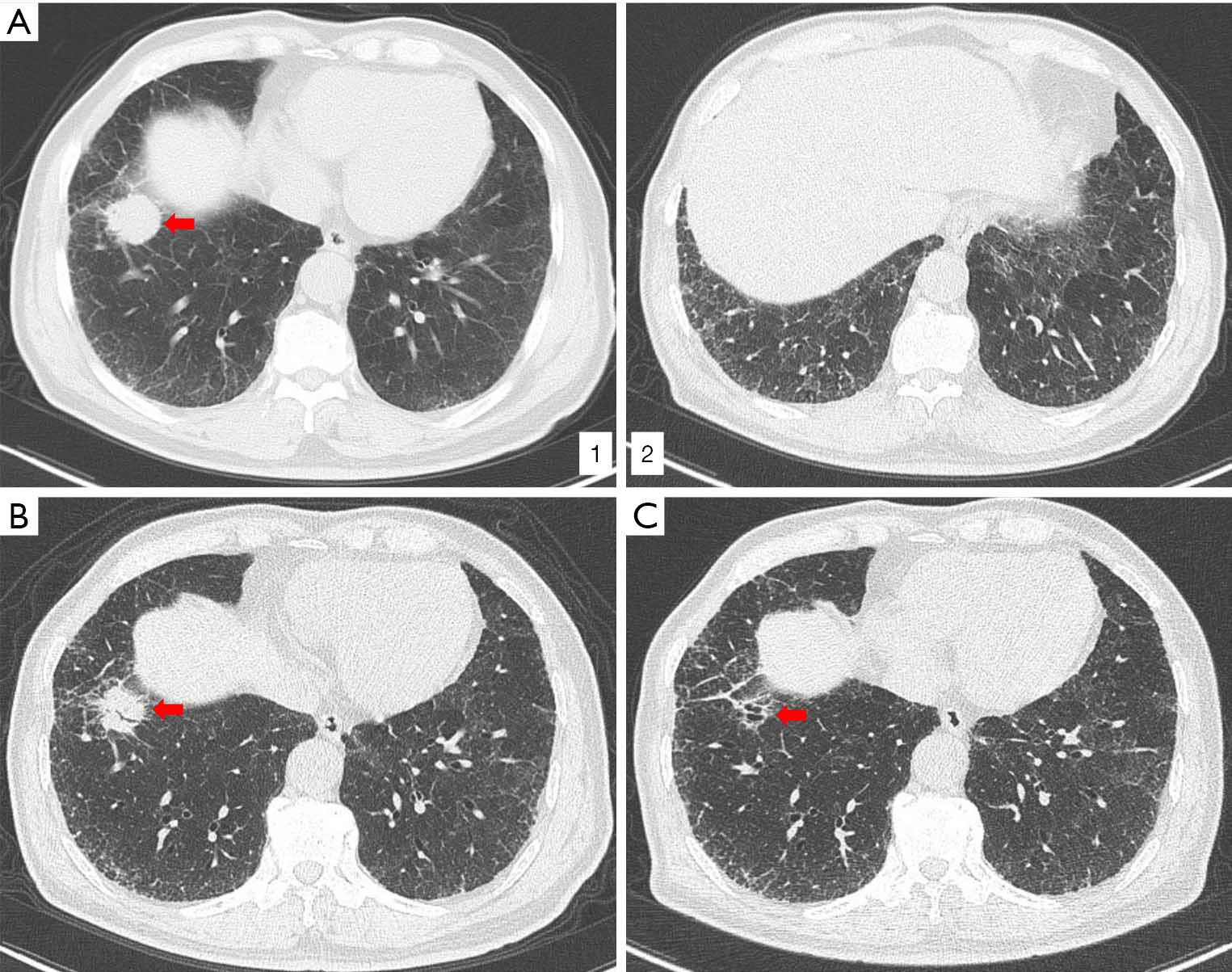 PD-L1 expression of tumor cells was evaluated as 60% positive using the VENTANA PD-L1 (SP263) Assay (Figure 4). As the patient refused chemotherapy, durvalumab monotherapy at 20 mg/kg every 4 weeks was initiated on January 2018. The patient showed a good response and reached partial remission after four cycles of durvalumab monotherapy (Figure 3). Complete remission was achieved after 6 cycles of therapy and confirmed by another 18F-FDG-PET/CT eighteen months later (Figure 2). The patient received durvalumab for two years until January, 2020 and reported no Immune-Related adverse event. Chest CT Examination showed sustained complete remission on March, 2020. 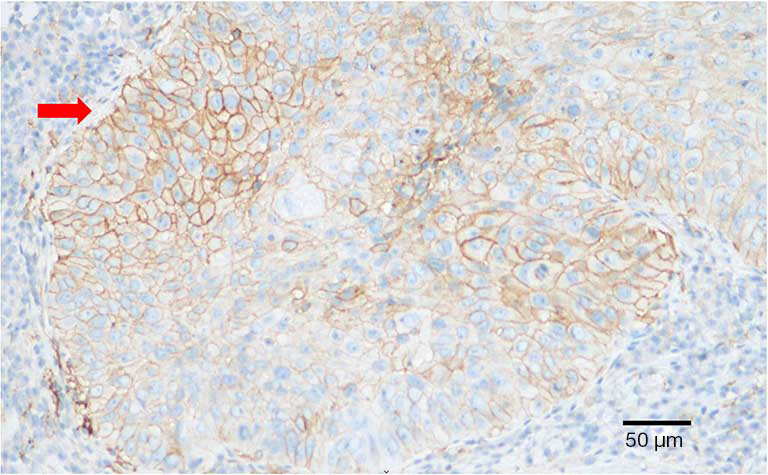 All procedures performed in this case involving human participants were in accordance with the Declaration of Helsinki (as revised in 2013). Informed consent was obtained from the patient.

We presented the unusual case of an older male patient with advanced NSCLC and ILD who received durvalumab monotherapy as first-line treatment. To the best of our knowledge, NSCLC patients with secondary ILD diagnosis treated with ICIs have rarely been reported.

Monoclonal antibodies against PD-1 and PD-L1 have emerged as effective therapies for patients with advanced NSCLC. The phase 3 MYSTIC study did not meet its primary end points of improved OS with durvalumab vs. chemotherapy in patients with ≥25% of tumor cells expressing PD-L1 (11). However, the MYSTIC study’s exploratory analysis of the effect of post-study immunotherapy on OS concluded that a high proportion of patients in the chemotherapy arm received subsequent immunotherapy, which may have confounded the primary OS outcome. After adjusting for the effect of subsequent immunotherapy, first-line durvalumab had higher OS benefit compared to chemotherapy (12,13). The rate of grade ≥3 treatment-related AEs was much lower with durvalumab than with chemotherapy. Considering the tolerance, durvalumab was also superior as a first-line therapy for NSCLC patients with tumor cell PD-L1 expression ≥25%. The patient in this case report received durvalumab monotherapy as a first-line therapy for NSCLC and achieved sustained CR for more than 2 years, which suggests that durvalumab monotherapy is effective as a first-line treatment for NSCLC.

PD-1 is an inhibitory co-receptor that is expressed on the surface of activated T lymphocytes. PD-1 binds to PD-L1 or PD-L2 to modulate T lymphocyte function and prevent autoimmunity in peripheral tissues. Monoclonal antibodies inhibit PD-1/PD-L1 signaling, which not only activates T lymphocyte-mediated antitumor immunity, but can also result in autoimmune toxicities, some of which can be severe or even fatal. In NSCLC patients, autoimmune pneumonitis, which has been associated with a number of treatment-related deaths in early phase studies, has drawn particular interest among oncologists (3,14,15). Antibodies against PD-L1 still permit the interaction of PD-1 with its other ligand, PD-L2, which may lessen the blockade effect on the negative inhibitory signals, resulting in reduced autoimmunity. In previous studies, the incidence of high-grade and all-grade pneumonitis was higher with anti-PD-1 therapy but not with anti-PD-L1 therapy when compared to traditional chemotherapy for NSCLC (16). Systematic analysis has also shown that the incidence of grade 3/4 immune-mediated pneumonitis was slightly higher with PD-1 inhibitors than with PD-L1 inhibitors (17).

Approximately 10% of NSCLC patients are diagnosed with ILD. Since acute exacerbation of ILD is a fatal adverse event that can occur during therapy, treating NSCLC patients with ILD presents a challenge for clinicians. There have been few prospective clinical trials of patients with both NSCLC and ILD. However, due to the low risk of immune-mediated pneumonitis with PD-L1 inhibitors, this patient was successfully treated with durvalumab monotherapy, which indicates that PD-L1 inhibitors can be used to safely treat patients with NSCLC and ILD. However, further investigation into their use is needed.

In conclusion, we reported a patient with NSCLC and ILD who was successfully treated with durvalumab monotherapy as a first-line therapy and experienced no irAEs. The safety of PD-L1 inhibitors for treating patients with ILD warrants further study.

Reporting Checklist: The authors have completed the CARE reporting checklist. Available at http://dx.doi.org/10.21037/apm-20-1134

Conflicts of Interest: All authors have completed the ICMJE uniform disclosure form (available at http://dx.doi.org/10.21037/apm-20-1134). The authors have no conflicts of interest to declare.

Ethical Statement: The authors are accountable for all aspects of the work in ensuring that questions related to the accuracy or integrity of any part of the work are appropriately investigated and resolved. All procedures performed in this case involving human participants were in accordance with the Declaration of Helsinki (as revised in 2013). Informed consent was obtained from the patient.