Nearly 22.5% and 52.5% of Western and Asian patients with non-small cell lung cancer (NSCLC), respectively, have positive epidermal growth factor receptor (EGFR) mutations (1). However, there is a subset of patients (10–15%) with some type of non-classical mutations (L861Q, G719X, S768I) who show limited response to first-generation EGFR tyrosine kinase inhibitors (EGFR-TKIs). Liver metastasis is a predictive factor for poor response in lung cancer (2,3). Single MET amplification and EGFR T790M mutation have been confirmed as mechanisms of acquired resistance to EGFR non-classical mutations (4). Here, we report a patient who was diagnosed with advanced lung adenocarcinoma harboring EGFR non-classical mutation L861Q and who achieved tumor control and complete continuous response in liver metastasis with afatinib. More importantly, afatinib plus crizotinib overcame the resistance of MET amplification. Remission of the liver metastasis continued even after the EGFR T790M mutation emerged and the disease progressed. We present the following case in accordance with the CARE reporting checklist.

A 54-year-old non-smoking Asian female who was healthy previously presented in September 2016 with dry cough. No history of cancer was identified in her family. Computed tomography (CT) scan of the chest showed an enlarged mass in the right hilum with enlarged right hilar and mediastinal lymph nodes (Figure 1A,B). CT scan on the abdomen (Figure 1C) revealed a metastatic tumor in the right lobe of the liver. Magnetic resonance imaging (MRI) of the brain found two metastases in the left frontal lobe and right parietal lobe. She was diagnosed with lung adenocarcinoma (cT4N3M1c, stage IV) harboring EGFR exon 21 (L861Q) mutation by percutaneous lung biopsy and next-generation sequencing (NGS). 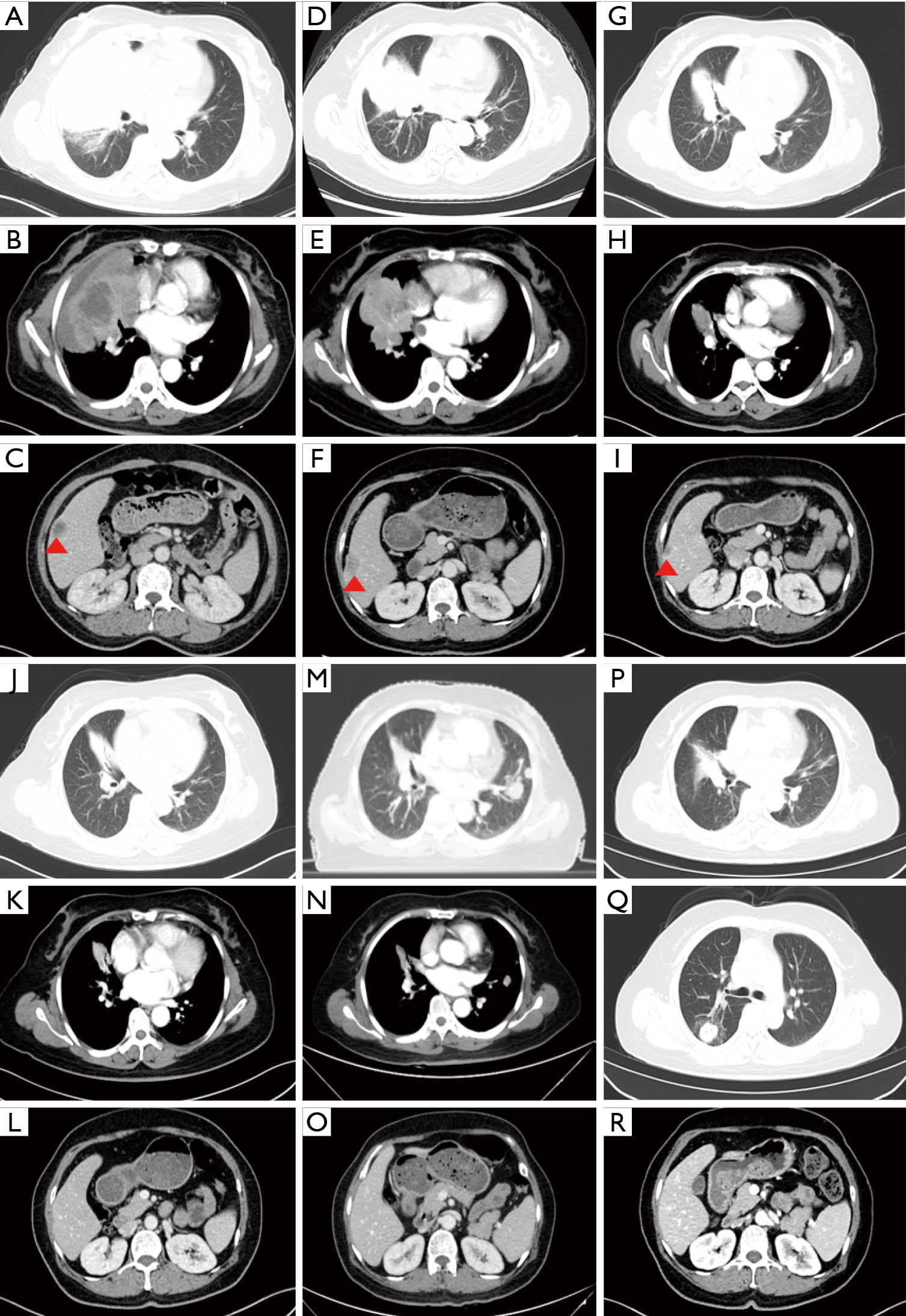 First-line chemotherapy with pemetrexed plus carboplatin started in November 2016. Partial response (PR) was achieved in the first 4 cycles of chemotherapy, and stereotactic radiotherapy was applied for the brain metastases. However, both the pulmonary lesion and the liver metastasis progressed in the next 2 cycles of maintenance chemotherapy with pemetrexed in April 2017 (Figure 1D,E,F). The patient then accepted afatinib (40 mg orally once daily) on April 13, 2017, as the second-line treatment. The pulmonary lesion and liver metastasis effectively shrank and PR was achieved after treatment by afatinib for 28 days (Figure 1G,H,I). On October 8, 2017, the primary lesion and brain metastases sustained PR and the liver metastasis could no longer be detected (Figure 1J,K,L). Multiple pulmonary metastases appeared in August 2018. The progression-free survival (PFS) of second-line treatment was nearly 16 months. Tissue rebiopsy of her emerging lesion in the left lung detected EGFR L861Q mutation at 56.64% and MET amplification with 9.54 copy numbers by NGS. Taking her gene mutations into consideration, we started the patient on a combined administration of afatinib and crizotinib in September 2018 (Figure 1M,N,O). Pulmonary lesions regained PR (Figure 1P). Pulmonary lesions eventually grew in July 2019 (Figure 1Q). The PFS of third-line treatment was nearly 10 months. Tissue re-biopsy of her growing right lung lesion detected EGFR L861Q mutation at 74.72% and EGFR T790M mutation at 52.41% by NGS. The patient then received osimertinib as a fourth-line treatment beginning in August 2019. Of significant note, PR of the brain metastases and CR of liver metastasis persisted for 22 months until the latest follow-up day on August 9, 2019 (Figure 1R). The summary of the patient’s treatment is shown in Figure 2.

Figure 2 The summary of the patient’s treatment.

The patient reported a rash, hand-foot syndrome, liver dysfunction, and diarrhea over the duration of treatment with afatinib. However, adverse events of grade 2 severity (according to CTCAE 4.0) only included diarrhea and elevated hepatic enzymes. The combination of afatinib with crizotinib did not increase the incidence and severity of adverse events. Written informed consent was obtained from the patient for publication of this manuscript and any accompanying images.

The effective response in the patient’s liver metastasis with non-classical EGFR mutation might be associated with tumor heterogeneity and the mechanism of afatinib. The contribution of genetic variability and tumor heterogeneity to EGFR-TKI resistance in lung cancer has been confirmed by several studies (10,11). In the present case, the resistance of MET amplification was tested in the lung while CR persisted in the liver. Afatinib is an irreversible ErbB family blocker that inhibits the kinase activity of all ErbB family members including Erb-B2 receptor tyrosine kinase 3 (ErbB3, HER3) (12). There is a study demonstrating increased hepatocyte growth factor (HGF) expression when cancer invades and grows in the liver (2). Considering that HGF has been suspected of activating the downstream pathway of tumorigenesis through ErbB3 (13), it is reasonable to speculate that the broad spectrum of activity across ErbB family members and the enzymatically irreversible binding to active ErbB family receptors of the second-generation EGFR-TKI might result in effective control in liver metastasis.

Data on the acquired resistance mechanism of non-classical EGFR mutations are limited. Amplification of the MET gene and EGFR T790M mutation account, respectively for ∼5% and ∼60% of EGFR-TKI resistance cases among classical EGFR mutation patients (4). The literature contains some case series and small sample studies of crizotinib with or without EGFR-TKI for acquired MET amplification in EGFR non-classical mutations resistant to first or third EGFR-TKIs obtaining a positive result (14-18). However, there is no report about combined second-generation drugs and MET inhibitor in patients with non-classical EGFR mutations. It is the first time that the regimen above was proved to be both effective and tolerable in patient with EGFR non-classical mutation. Nevertheless, this case report only acted as a reference. The unanswered questions about the mechanism need further research.

We report here an extremely advanced NSCLC with EGFR non-classical mutation case that achieved an enduring CR in liver metastasis and long-term survival time based on precise and individual treatment. Although the exact mechanisms involved remain unclear, this case report provides a reference for the treatment and acquired resistance of an analogous patient. Meanwhile, for the first time, the combination of afatinib with crizotinib to overcome the resistance of MET amplification and EGFR non-classical mutation was confirmed to be a safe and reliable therapeutic strategy.

Funding: This work was supported by the Sichuan Provincial Research Foundation for Basic Research (2018SZ0023).

Conflicts of Interest: All authors have completed the ICMJE uniform disclosure form (available at http://dx.doi.org/10.21037/apm-19-482). The authors have no conflicts of interest to declare.

Ethical Statement: The authors are accountable for all aspects of the work in ensuring that questions related to the accuracy or integrity of any part of the work are appropriately investigated and resolved. All procedures performed in studies involving human participants were in accordance with the Helsinki Declaration (as revised in 2013). All clinical investigations were approved by the West China Hospital of Sichuan University. Written informed consent was obtained from the patient for publication of this manuscript and any accompanying images.