Lung cancer is the most commonly diagnosed cancer (11.6%) and the leading cause of cancer-related death (18.4%) (1). In China, most lung cancer patients are not diagnosed until advanced stage (2). Platinum-based doublet chemotherapy comprised of pemetrexed, gemcitabine, etoposide, or taxanes (paclitaxel or docetaxel) are first-line therapies for advanced lung cancer, especially for patients without targetable driver gene mutations or those who are resistant to targeted therapy (3). However, platinum-based chemotherapy results in significant adverse effects, including neutropenia (4). Neutrophils are major mediators of the innate immune system and are the first line of defense against bacterial infections. Cancer chemotherapy induces neutropenia in more than one in three patients who receive chemotherapy. Patients with severe neutropenia are at high risk for development of infections (5). The most serious immediate consequence of chemotherapy is febrile neutropenia (FN). A study has demonstrated that the incidence of FN in patients with lung cancer who received one of the four common platinum-based doublet chemotherapies was 3–14%. However, patients who died within 30 days of receiving therapy (4–6%) were not considered in this analysis (6). Another previous report showed that the risk of mortality in patients with FN was at least 15% higher than that in patients without FN (7). The cost of neutropenic complications resulting from myelosuppressive chemotherapy may be extensive in terms of hospitalization and follow-up care, particularly in the case of FN (8).

Colony-stimulating factor (CSF) has been reported to reduce the duration of severe neutropenia and the incidence of FN in patients with lung cancer who received platinum-based chemotherapy (9). Current clinical practice guidelines recommend prophylactic CSF treatment in patients at high risk for FN (>20%) based on either the chemotherapy regimen or patient risk factors (10,11). However, granulocyte-CSF (G-CSF) can induce adverse reactions such as fever, malaise, influenza-like symptoms, injection-site discomfort, FN, and decreased white blood cell count. A common and sometimes severe adverse effect resulting from G-CSF treatment is bone pain, which develops in 10–30% of patients who received G-CSF. Bone pain can be controlled using non-narcotic analgesics. Other rare adverse effects include acute myeloid leukemia, myelodysplastic syndrome, and splenic rupture (12,13). CSF has been underused as a primary prophylactic agent in high-risk patients despite current guidelines (14). Severe side effects, strict storage requirements, and relatively high cost may contribute to underuse of CSF.

A Chinese medicine called Joungal may be a suitable substitute for CSF. Joungal contains extracts and concentrates of 11 special components, including epimedium, astragalus, angelica, and scorpion (Table S1). It is a brown-red liquid with a sweet smell and a slightly bitter taste that promotes increased appetite and improves nutrition. Joungal has been shown to protect against chemotherapy-induced leukopenia in preclinical and clinical studies. Studies have shown that epimedium enhanced the immune response by stimulating the immune system, bone marrow DNA synthesis, and granulocyte-derived progenitor cell generation (15). In addition, angelica has been shown to promote production of blood-forming factors such as G-CSF and GM-CSF (16). However, no studies have evaluated the potential of Joungal to prevent chemotherapy-induced FN. In this retrospective study, we evaluated the efficacy and adverse effects of Joungal in patients with lung cancer who received platinum-based doublet chemotherapy. We present the following article in accordance with the STROBE reporting checklist (available at http://dx.doi.org/10.21037/apm-19-531).

A total of 795 patients with lung cancer treated with platinum-based chemotherapy from January 2012 to December 2017 were enrolled in this study. Data were collected and recorded by five professional oncologists. Clinicopathological characteristics such as gender, age, smoking status, stage of disease, hemoglobin, and histologic type were collected. The treatment group consisted of 191 patients treated with Joungal. Propensity score (PS) matching was performed to select the matched study groups. We used a 1:2 ratio with PS matching for age, gender, smoking status, histologic grade, histologic type, and chemotherapy agents. The control group was comprised of 382 patients who did not receive Joungal (Figure 1). The trial was conducted in accordance with the Declaration of Helsinki (as revised in 2013). This study was conducted in accordance with local laws and provisions, and informed consent was required. This program was approved by the Ethics Committee of Hunan Cancer Hospital (2016-YQLL-056). 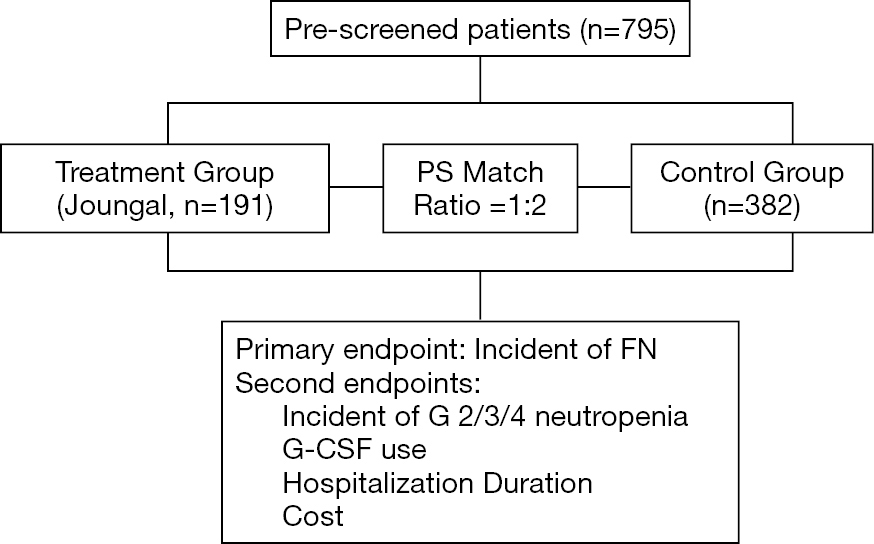 The primary end point was chemotherapy-related incidence of FN and the secondary end points were incidence of grade 2/3/4 neutropenia, granulocyte colony-stimulating factor (G-CSF) use, hospitalization duration, and cost of supportive care. We assessed neutrophils in the peripheral blood twice per week following chemotherapy, and measured temperature at least twice per day for two weeks according to the European Society for Medical Oncology (ESMO) guideline (17). We also compared the cost of supportive care between the two groups (cost of chemotherapy, tomography examination, and radiotherapy were excluded).

All statistical analyses were performed using Statistical Product and Service Solutions (SPSS, version 22). Comparisons of baseline characteristics between the control and Joungal groups were conducted using the χ2 test. Odds ratios (OR) were the quotient of the ratio of the number of patients with FN or neutropenia to the number of people without FN or neutropenia in the treated and control groups. An OR <1 indicated that the risk of FN or neutropenia was reduced. Differences in incidence of FN and neutropenia, G-CSF use, hospitalization duration, and economic burden between the groups were evaluated using the χ2 test. P values <0.05 were considered statistically significant. 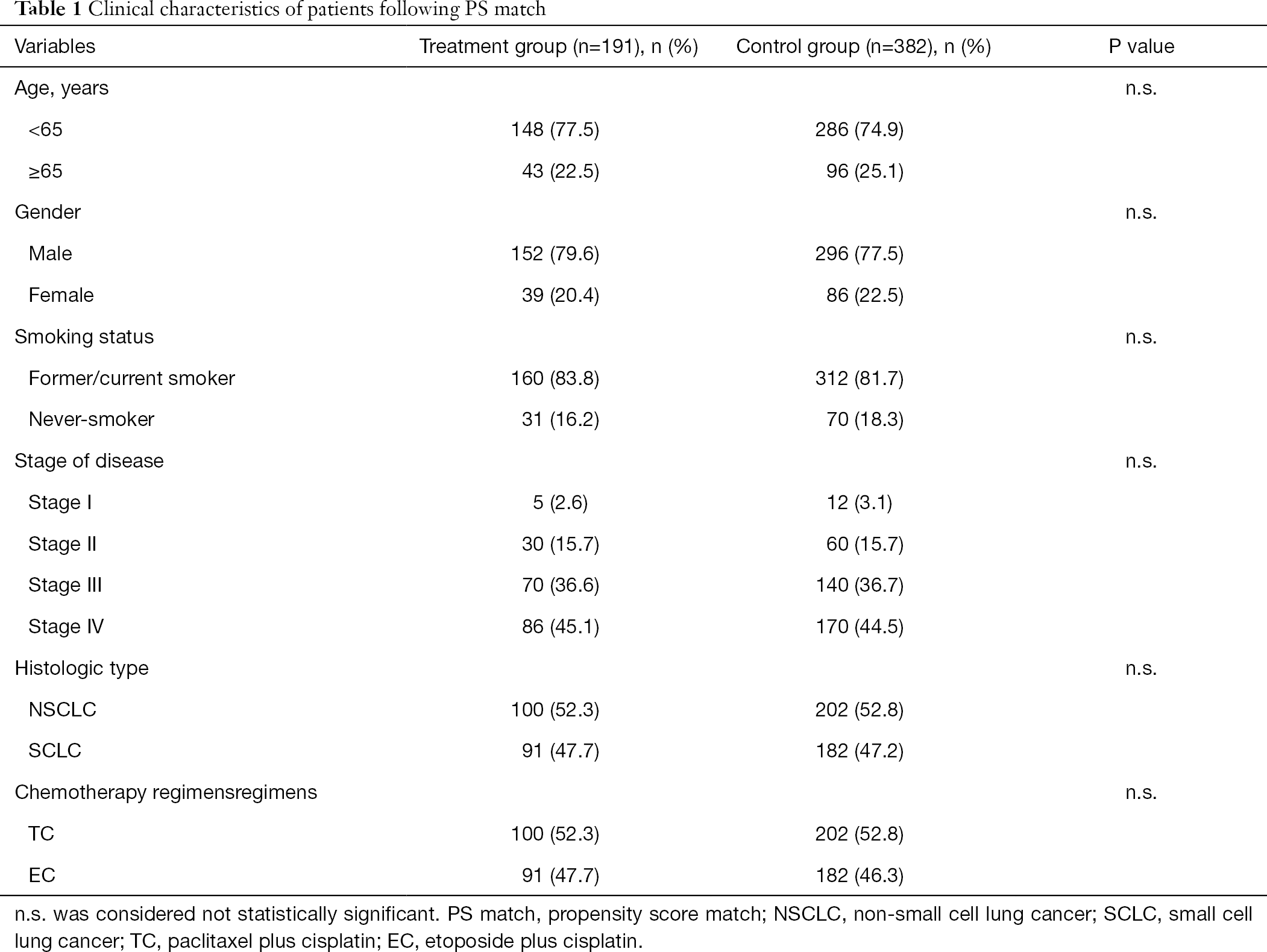 Figure 2 Primary endpoints. (A) The incidence of FN; (B) the rate of occurrence of neutropenia in all groups. Chi-squared test was used for statistical analysis. *, P<0.05 was considered statistically significant.

Drug-related toxicity is summarized in Table 2. No toxicity occurred in either group. The most common adverse effects induced by Joungal were anemia, nausea, and vomiting. The incidence of anemia was not significantly different between the two groups. Among the adverse effects, only nausea and vomiting occurred more frequently in the Joungal group than in the control group. In the treatment group, 26.2% experienced nausea and 20.9% experienced vomiting, but only 1 patient developed nausea of grade 3 or higher.

Our study showed that Joungal decreased the incidence of platinum-based chemotherapy-induced FN in patients with lung cancer. Joungal is easy to take, inexpensive, and stable under ambient conditions. Joungal has potential for use as the primary prophylactic agent for prevention of neutropenia or FN during chemotherapy.

Neutropenia is a major cause of infection-related morbidity and mortality in patients undergoing myelosuppressive chemotherapy, and FN is the most serious manifestation of neutropenia (18). FN can necessitate hospitalization, resulting in higher economic and labor costs, and reduced quality of life (19), and can lead to chemotherapy dose delays and/or reductions, or discontinuation of systemic chemotherapy, which may impact treatment efficacy and increase the risk of mortality (18,20). Strategies to minimize the adverse effects of FN have focused on use of G-CSF to reduce the duration and severity of neutropenia (21).

Filgrastim was approved by the Food and Drug Administration (FDA) in 1991 following a phase III trial comprised of 211 patients that demonstrated that filgrastim reduces the duration of grade 4 neutropenia (6 days in the placebo group vs. 3 days in the filgrastim group) and the incidence of FN (76% in the placebo group vs. 40% in the filgrastim group, P<0.001) in patients with lung cancer receiving chemotherapy (22). The study also showed that filgrastim reduced the total number of days of treatment with intravenous antibiotics and days of hospitalization. Several meta-analyses also indicated that primary prophylaxis with G-CSF reduced the risk of FN by 50% in patients with solid tumors without affecting the rate of tumor response (23). However, G-CSF had little or no effect on infection-related death or overall survival. Evidence-based guidelines from the ESMO, American Society of Clinical Oncology (ASCO), and National Comprehensive Cancer Network (NCCN) recommend evaluating the risk for development of FN prior to the first cycle of chemotherapy based on disease type and chemotherapy regimen. If a patient is at high risk (>20% risk of FN), prophylactic use of G-CSF is recommended in the first and subsequent chemotherapy cycles. For patients receiving chemotherapeutic regimens with an intermediate risk for development of FN (10% to 20%), other risk factors should be taken into consideration such as age ≥ 65 years, poor performance status, and prior FN (10,24,25).

However, G-CSF has substantial limitations and can induce significant AEs. One retrospective study that evaluated safety of several CSFs showed that the most common severe AEs were FN and decreased white blood cell count, while the most common non-serious AE was bone pain (12). Other common side effects of G-CSF included fever, malaise, influenza-like symptoms, and injection-site discomfort (21). A large observational study of routine clinical practice in Europe, Australia, and Canada found that up to 80% of patients with solid tumors considered to be at high risk for development of FN did not receive G-CSF prophylaxis (26). This underuse of G-CSF might be due to lack of understanding of guidelines among different doctors, reimbursement policies, race, location, cancer type, or chemotherapy regimen (14).

We evaluated Joungal as a potential substitute for G-CSF for primary prophylaxis in patients with lung cancer patients receiving chemotherapy. Our data showed that the rates of neutropenia and FN were significantly reduced (grade 2/3/4 neutropenia from 56% to 30%; FN from 9.5% to 2.3%) in the Joungal group compared with those in the control group. Our data also showed that Joungal reduced use of G-CSF, hospitalization duration, and economic burden. Furthermore, we showed that Joungal did not induce any severe adverse effect, and the most common side effects were nausea and vomiting. Although the risk of nausea and vomiting in the Joungal group was nearly ten times that of the control group, only 1 patient developed grade 3 or higher nausea. The remainder of nausea cases were grade 1 or 2, were easily treated using mild antiemetic drugs, and had very limited effects on quality of life or economic burden.

Our study had some limitations. It was retrospective in nature and had a limited sample size. These limitations may have led to selection bias or lack of generalizability of our findings. In addition, there was no long-term follow-up and the study did not evaluate overall survival or progression-free survival.

We thank all of the patients who participated in this study. We also thank Dr. Rui Guan for providing technical support and participating in discussions throughout the study.

Reporting Checklist: The authors have completed the STROBE reporting checklist. Available at: http://dx.doi.org/10.21037/apm-19-531

Conflicts of Interest: All authors have completed the ICMJE uniform disclosure form (available at http://dx.doi.org/10.21037/apm-19-531). The authors have no conflicts of interest to declare.

Ethical Statement: The authors are accountable for all aspects of the work in ensuring that questions related to the accuracy or integrity of any part of the work are appropriately investigated and resolved. The trial was conducted in accordance with the Declaration of Helsinki (as revised in 2013). This study was approved by the Ethics Committee of Hunan Cancer Hospital (2016-YQLL-056) and informed consent was taken from all the patients.