Atrial fibrillation (AF) is a new cardiovascular disease epidemic of the 21st century (1). According to the 2010 Global Burden of Disease Study, the number of AF patients worldwide was 33.5 million (2). By 2050, there will be 72 million patients with AF just in Asia and 2.9 million AF-associated strokes (3). Previous studies have shown that AF is independently associated with a 1.5- and 2-fold increased risk of all-cause mortality in men and women respectively (4-6).

Modifiable risk factors of AF included hypertension, diabetes, myocardial infarction, obesity (1,7). Among all these causes, hypertension is the most important, estimated to account for between 14% and 22% of the population-attributable risk which increases to 25% if borderline hypertension is also included (8,9). Identification, prevention and proper management of blood pressure (BP) is needed for preventing AF.

Meanwhile, both hypertension and AF are long-lasting chronic conditions, requiring repeated measurements for the diagnosis. However, there is limited and conflicting data on the association between AF and the degree of systolic blood pressure (SBP) control in hypertensive patients, especially in patients receiving antihypertensive treatment. Studies were even fewer in Chinese regions (10,11). In the present study, we investigated the relationship between SBP and AF in a group of hypertensive patients in Chinese population with or without antihypertensive medications. We present the following article in accordance with the STROBE reporting checklist (available at http://dx.doi.org/10.21037/apm-19-649).

This population cohort was originated from 8,169 hypertensive patients aged ≥18, who attended annual physical assessment in the community health care center in Liaobu community, Guangdong, China. All participants were enrolled in 2013, diagnosed with essential hypertension and have provided complete sets of data. The participants who did not have data on blood pressure (n=38), blood lipid (n=245), serum creatinine (n=255), demographics (n=45), and electrocardiogram (ECG) (n=71) were excluded. Finally, 7808 subjects were included in the analysis (Figure 1). The study complied with the principles outlined in the Declaration of Helsinki (as revised in 2013) and was approved by the institutional medical ethical committee. Written informed consent was obtained from all patients in the study. 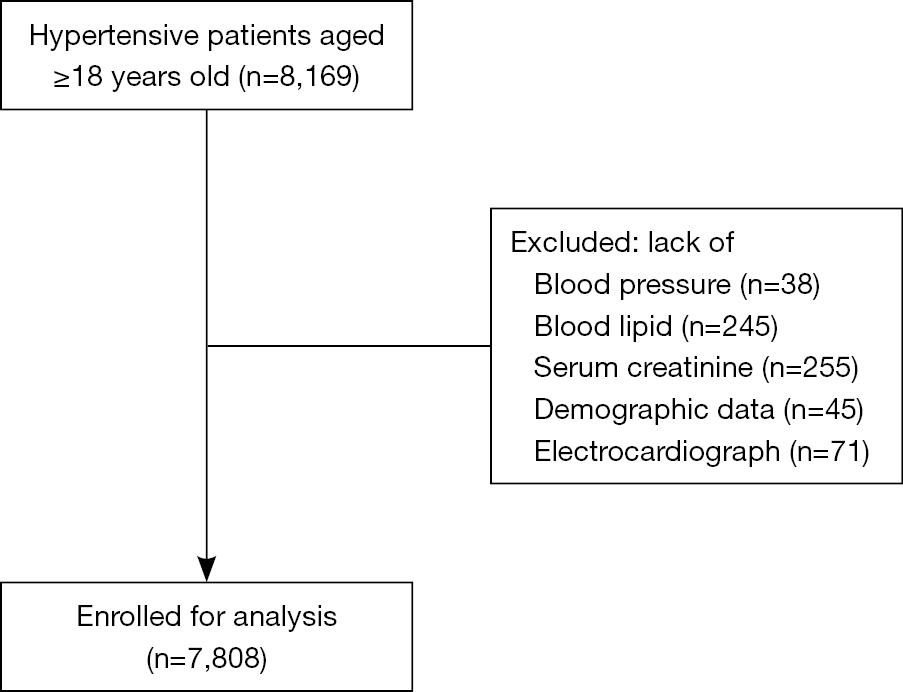 A structured questionnaire was administered by well-trained staff to acquire information on sociodemographic characteristics (including age, sex, smoking, and drinking), medication history [the use of Beta-blockers, calcium channel blockers (CCB), angiotensin-converting enzyme inhibitors (ACEI)/angiotensin-receptor blockers (ARBs), and statins], medical history [ever occurrence of coronary heart disease (CAD), diabetes mellitus (DM), and stroke]. Anthropometric data and biomarkers including body mass index (BMI), SBP, diastolic blood pressure (DBP), total cholesterol (TC), triglyceride (TG), low-density lipoprotein cholesterol (LDL-C), high-density lipoprotein cholesterol (HDL-C), fasting blood glucose (FBG) were measured by physical assessment and laboratory analyses. Blood samples were collected after a fast for at least 8 hours. Estimated glomerular filtration rate (eGFR) was estimated using the simplified equation on the modification of diet in renal disease: 186 × (Scr) − 1.154 × (age) − 0.203× (0.724 if female) where Scr was serum creatinine (mg/dL) (12). Participants were considered to have diagnosed DM if they had previously been diagnosed by a registered medical practitioner, and/or use of hypoglycemic drugs within 2 weeks, and/or with baseline FBG ≥7.0 mmol/L. The product of QRS duration was multiplied by the Cornell voltage combination [RaVL + SV3, with 6 mm added in women (13,14)] higher than 2,440 mm × msec or Sokolow-Lyon voltage (SV1 + RV5/6) higher than 38 mm (15) on a screening ECG were used to identify left ventricular hypertrophy (LVH).

BP measurement was obtained by trained examiners in the office using the Omron HBP-1100u professional portable BP monitor (Japan) on the right arm. BP was measured twice after a standard protocol and the average of two readings was calculated. Hypertension was defined as SBP ≥140 mmHg, and/or DBP ≥90 mmHg, and/or use of antihypertensive medicine within 2 weeks, according to 2010 Chinese guidelines for the management of hypertension (16).

ECG recording and definition of AF

ECG was obtained from standard resting 12-lead recordings at a paper speed of 25 mm/s and calibration of 1 mV per 10 mm and was collected from all subjects at baseline. Participants were considered AF if AF rhythm was captured in ECG. AF rhythm was defined as (I) irregular R-R intervals, (II) absence of distinct repeating P waves, (III) irregular atrial activity show on ECG, according to the 2014 ACC/AHA/HRS Guideline for the Management of Patients With Atrial Fibrillation (17). Those who were not found to have AF on ECG, but had previous medical records from qualified hospital(s) or any prior ECG record(s) of AF episode(s) were also defined as having AF (known AF in sinus rhythm). All the ECG results were identified and diagnosed by qualified practitioners.

After applying exclusion criteria, 7,808 participants with a mean age of 62.3 years old were included, with 3,678 (47.1%) men and 78 cases of AF being identified. The baseline characteristics of the participants were presented in Table 1 and Table 2. In brief, participants with diagnosed AF appeared to be older, had lower levels of SBP, DBP, TG, TC, and LDL-C, had more use of Beta-blockers, and were more likely to have CAD compared to those without AF (all P<0.01) (Table 1). There were significant differences in age, BMI, SBP, DBP, eGFR, FBG, TC, TG, LDL-C, HDL-C, DM, LVH, and the use of antihypertensive drugs such as CCB, ACEI, and ARB among the five groups (all P<0.05) (Table 2). 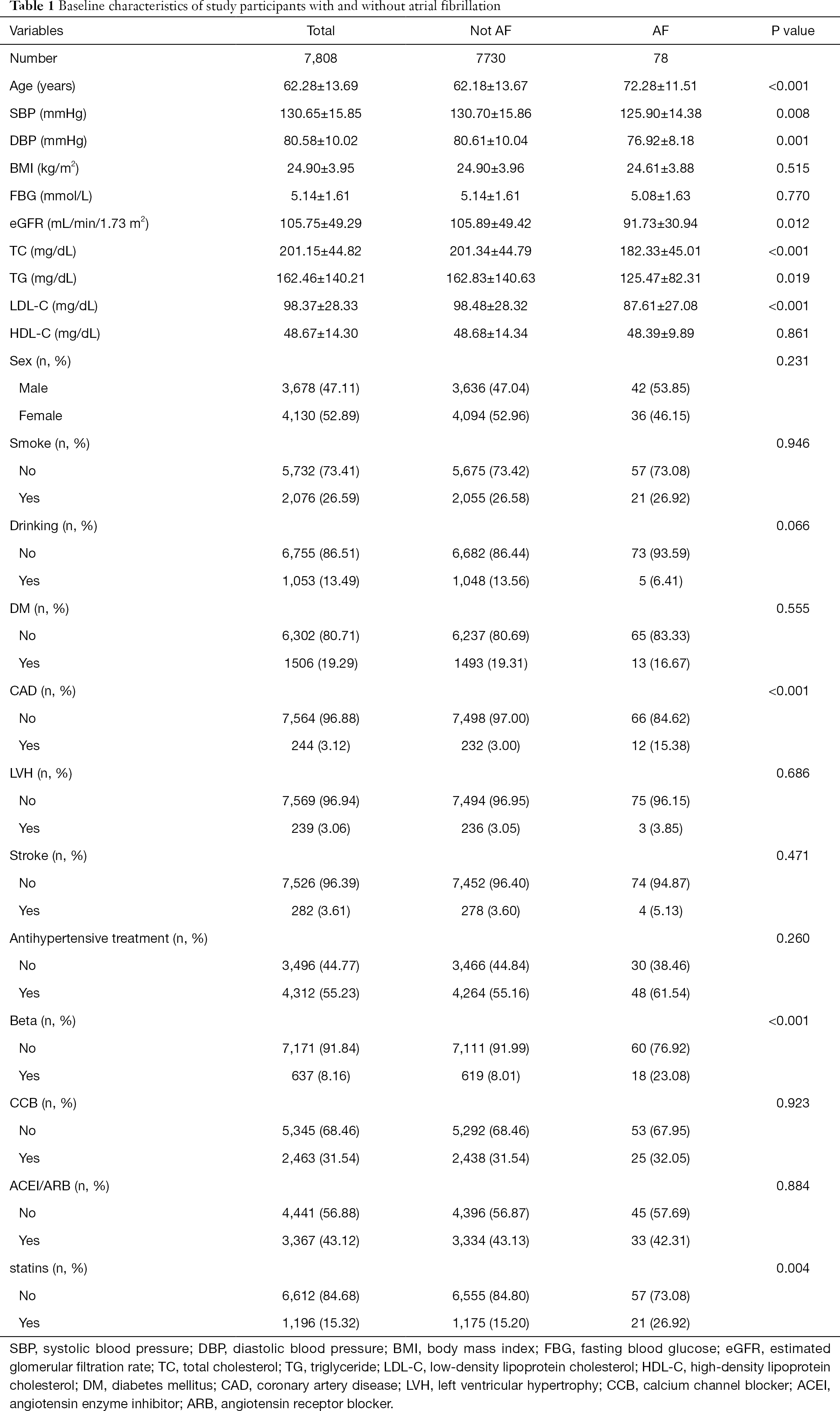 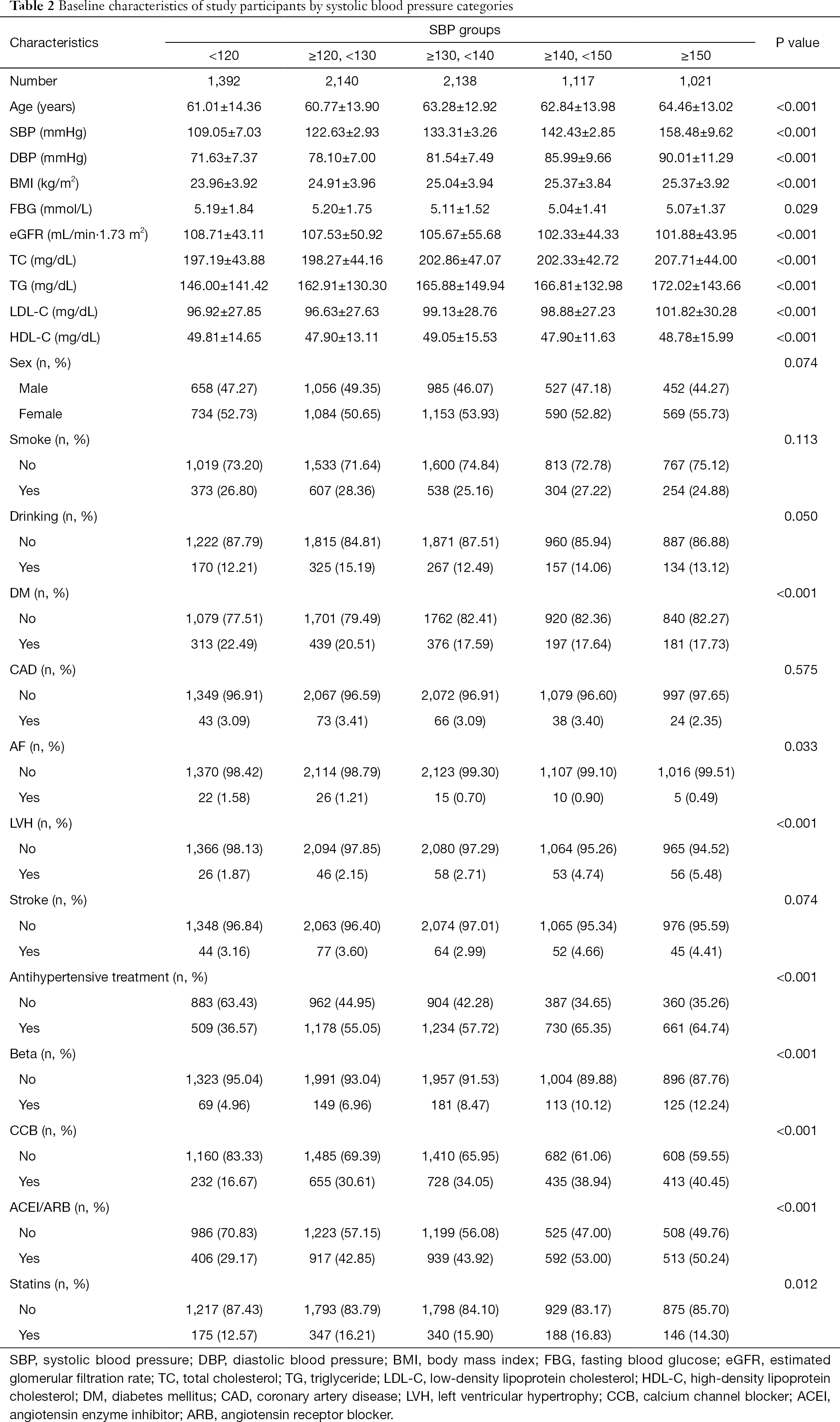 Association of SBP with AF in all participants 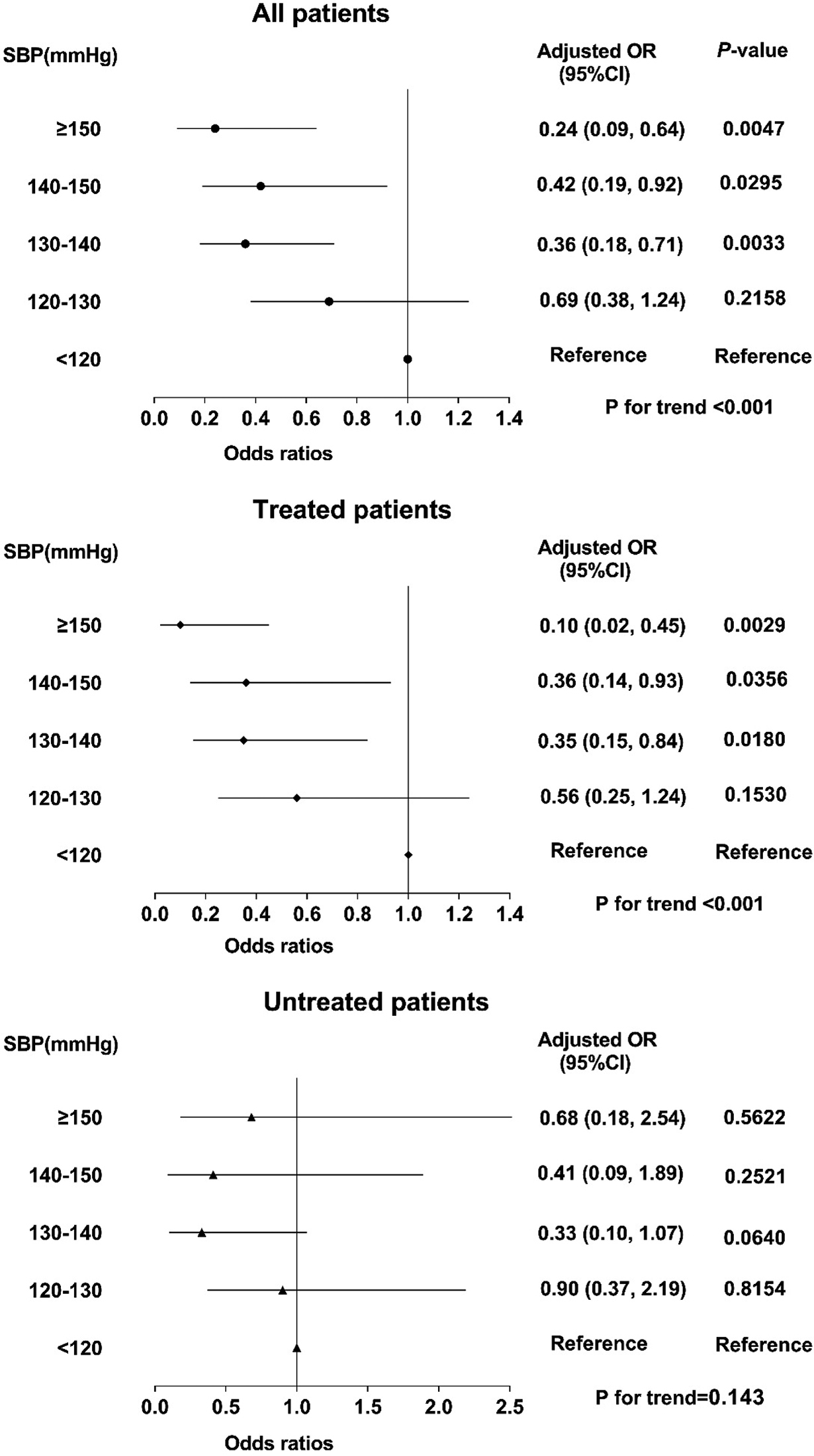 To further explore the relationship between SBP and AF among treated and untreated patients, we divided participants into two groups by the use of anti-hypertensive treatments. The results were revealed in Table 4 and Figure 3, and the linear relationship between SBP and AF was shown in Figure 2. In summary, higher SBP levels were associated with lower AF prevalence among treated patients (P for trend <0.001), but not for patients not receiving antihypertensive treatment. 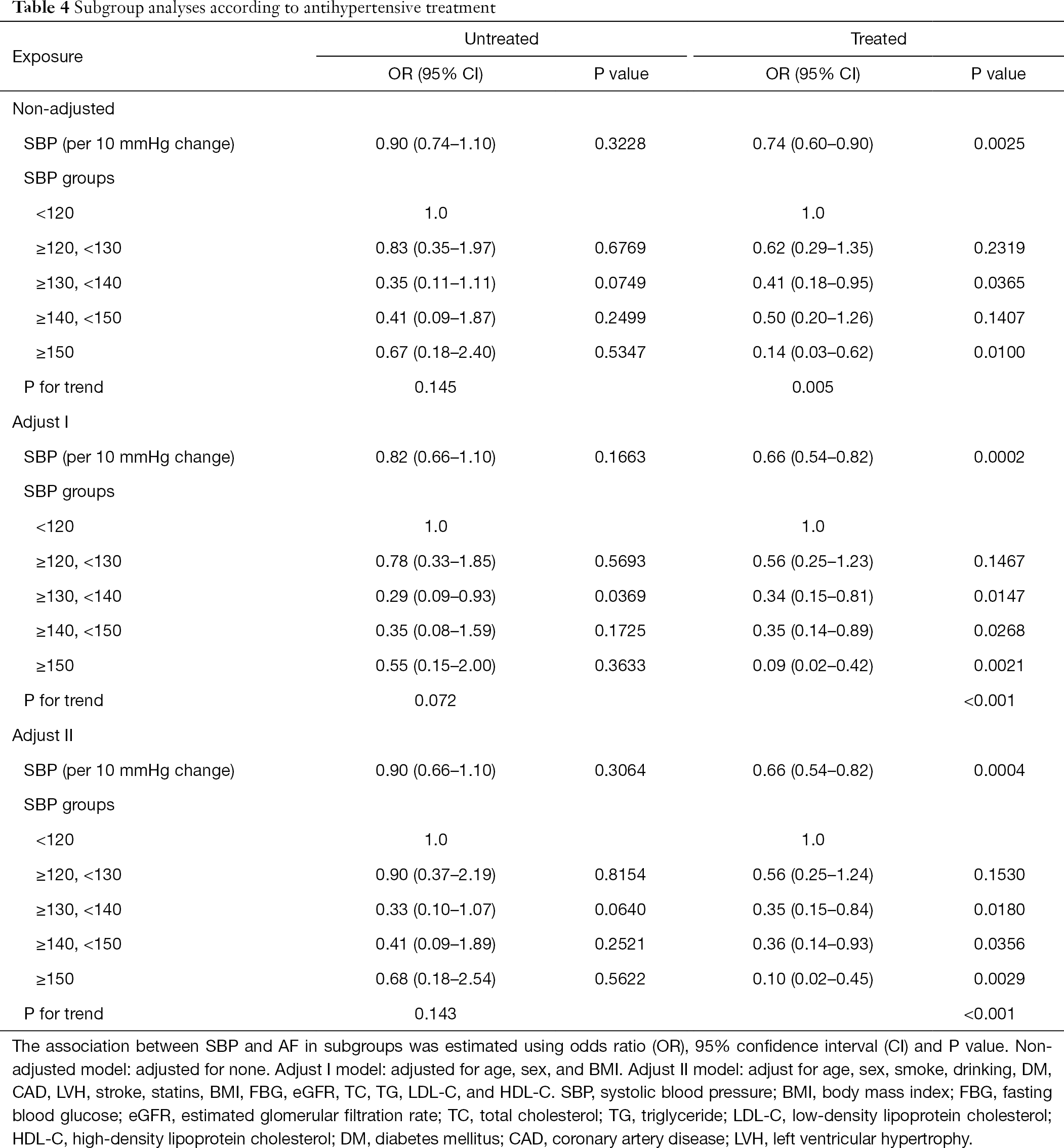 In the present study, SBP was significantly associated with AF prevalence in all hypertensive participants and for patients with antihypertensive therapy (P for trend <0.001).

Moreover, the REGARDS study (Reasons for Geographic and Racial Differences in Stroke) did not observe any significant differences in the prevalence of AF in relation to SBP levels in a large mixed population of normotensive and hypertensive individuals (20). Besides, in line with our findings, a cross-sectional study (10) enrolled 6,966 elderly residents and suggested a negative relationship between SBP and prevalent AF (per 10 mmHg increase, OR=0.79, 95% CI: 0.71–0.88, P<0.0001). Similar trend was observed in one previous study which enrolled 17003 older patients initiating hemodialysis with 5 years of follow-up (21). Reducing SBP for 10 mmHg was significantly associated with a higher HR for AF (HR=1.12, 95% CI: 1.10–1.14). These studies suggested that large-scale prospective studies or randomized controlled trials were needed to verify the association between SBP and AF.

Patients with antihypertensive treatment comprised of a pre-specified subgroup of special interest in the present study. Consistent with the overall finding, SBP was also associated with a lower rate of prevalent AF in patients who were pharmacologically treated for hypertension. The Losartan Intervention For Endpoint reduction in hypertension (LIFE) study found that among patients with hypertension and ECG-LVH, achieving SBP ≤130 mmHg was associated with a 40% lower risk (95% CI: 18–55%) of new AF (22). The preventive effect of antihypertensive therapy was also confirmed in another analysis of the LIFE study in a subgroup of patients with isolated systolic hypertension (23). However, the conclusions could not be generalized to hypertensive patients at lower risk because using ECG-LVH criteria to select patients for LIFE increased the baseline risk of the population. Among all the patients in our study, only 3% had LVH at baseline. Besides, a J-shaped relationship between SBP and AF was found in a case-control study of patients undergoing treatment for hypertension (24).

The mechanisms behind how SBP may physiologically relate with prevalent AF remains unclear. In general, Generally, hypertension promotes the remodeling of the heart’s structure and function after electrophysiological changes in the left atrium, and then lead to the development of AF by increasing the heart’s pulsating load and increasing the size of the left atrium (25). Besides, hypertension and LVH are the incentives for the development of AF, causing excessive sympathetic nerve activity. The result is an overreaction to stress-stimulated adrenaline, which leads to arrhythmias such as AF (26). However, the relationship between hypertension and AF is complicated because they share common risk factors. Apart from traditional risk factors, a recent study showed the combined effect of duration of hypertension and body weight status on the risk of new-onset AF, concluding that the highest risk for AF existed in patients with obesity and hypertension onset in no less than 5 years (27). Even though the onset duration of hypertension was not available in our study, the main findings remained significant after adjusting for many risk factors for AF, which increased the reliability of our research findings. A potential explanation of the negative correlation of SBP and AF is reverse causality. Low SBP may indeed increase the risk of AF via chronic coronary ischemia, myocardial proliferation and fibrosis induced by inadequate coronary perfusion which leads to the development of AF. On the other hand, low SBP may be the result of AF or AF-related cardiac structural and functional abnormalities (10,28). Another explanation may be that individuals with higher SBP levels are more likely to receive better clinical care and more usage of antihypertensive medications, which plays an important role in the mutually influenced relationship between hypertension and AF.

Worthy to mention, previous studies have proved that inhibition of renin-angiotensin-aldosterone system (RAAS) with ACEI or ARBs compared with β-blockers and diuretics associated with a reduced risk of AF (1,17). In our study, the relationship between SBP and AF remained significant after adjusting for antihypertensive treatment including ACEI and ARBs. Due to the insufficient data on the use of diuretics, we could not examine the possible relationship between hypovolemia and AF.

Some limitations should be taken into consideration to make cautious interpretation of our study. First, our study did not elucidate causation due to the cross-sectional design. Second, in the present analysis, AF cases were ascertained using ECGs. However, the patients that did not perform dynamic ECG detection, the true prevalence may have been underestimated by missing possible cases of paroxysmal AF, like all similar studies on AF. Current ESH/ESC guidelines recommend that ECG monitoring should be performed to all hypertensive patients, so there is a need for more extended and reliable AF screening in the future. Third, the absence of data on the left atrial size in the vast majority of patients might preclude a meaningful evaluation of whether the relationship of SBP to prevalent AF could be in part explained by differences in left atrial size. Finally, we recruited patients from a single center in China, therefore the results might not be extrapolated to other populations and ethnic groups.

Our findings suggested that higher SBP is associated with lower likelihood of AF among all hypertensive patients and participants with antihypertensive treatment. The findings may allow clinicians to provide better-personalized plans for disease management. More large-scaled prospective studies are needed to further verify our findings.

Reporting Checklist: The authors have completed the STROBE reporting checklist. Available at http://dx.doi.org/10.21037/apm-19-649

Conflicts of Interest: All authors have completed the ICMJE uniform disclosure form (available at http://dx.doi.org/10.21037/apm-19-649). The authors have no conflicts of interest to declare.

Ethical Statement: The authors are accountable for all aspects of the work in ensuring that questions related to the accuracy or integrity of any part of the work are appropriately investigated and resolved. The study was conducted in accordance with the Declaration of Helsinki (as revised in 2013). The study was approved by the institutional ethics committee of the Guangdong Provincial People’s Hospital (No. GDREC2012143H). Written informed consent was obtained from all patients in the study. A copy of the written consent is available for review by the Editor-in-Chief of this journal.