Magnesium ions are the main intracellular cations after potassium (1), and the fourth most abundant group of ions in the body (1). Magnesium plays a central part in the maintenance of normal neuroendocrine function, muscle contraction, and cell signal transmission (1). Magnesium balance in the body is regulated by dietary intake of magnesium, intestinal magnesium absorption, the filtration of magnesium by glomeruli, renal magnesium reabsorption, and the utilization and release of magnesium ions from bone (1-3). When the rate of glomerular filtration decreases, the reduction in magnesium excretion may bring about hypermagnesemia (1,3). Dialysis can remove excessive magnesium (3,4).

Both hypomagnesemia and hypermagnesemia can cause functional disorders to develop. Arrhythmia, neuropsychiatric disorders, and respiratory depression can all result from serious magnesium disorders (1,3). Kanbay et al. suggested in their study that magnesium in patients with chronic kidney disease is related to insulin resistance, vascular endothelial dysfunction, and systemic inflammation (5). Nevertheless, in clinical practice, magnesium has received a relatively low amount of attention compared with other electrolytes.

All patients who received hemodialysis treatment in our hospital between Nov 1, 2017, and Oct 31, 2018, were screened for the current study. The inclusion criteria were as follows: 1. uremic patients who had received hemodialysis treatment for a period of more than 90 days; and 2. pre-dialysis and post-dialysis total serum magnesium concentrations were tested at least once during the study period. The exclusion criteria were as follows: (I) aged <18 years old; (II) acute renal injury; (III) received hemodialysis therapy for a period of less than 90 days; (IV) without total serum magnesium concentration data.

Outpatient and inpatient data and variables were collected from the Electronic Medical Information System and information system at the hemodialysis center at our hospital. The dialyzers used in our hospital were Baxter gambro AK96 (membrane surface area 1.4 m2, membrane material polyamide). The dialysate was supplied via a central dialysis concentrate supply system. The magnesium ion concentration in the dialysate was 0.5 mmol/L. During hemodialysis treatment, the blood flow ranged between 200–280 mL/min, and the dialysate flow was 500 mL/min.

Previous studies have shown that some drugs can cause magnesium metabolic disorders. These drugs included proton pump inhibitors, diuretics, laxative, calmodulin inhibitors (CNI) cisplatin and anti-epidermal growth factor receptor (EGFR) agents (14-18). In the current study, patients with a history of using the above drugs up to two weeks before the laboratory tests were included.

The continuous variables were presented by mean ± standard deviation or median and quartile. Statistically significant difference was represented by P value <0.05. The differences between variables pre- and post-dialysis were compared by paired t-test.

The relationships between variables and total serum magnesium were examined with linear regression models. Model-1 was unadjusted, while model-2 was adjusted for age, gender, dialysis vintage, diabetes (19), dialysis treatment frequency per week, and vascular access. On the basis of model-2, model-3 was further adjusted for pre-dialysis serum phosphorus, pre-dialysis blood urea, pre-dialysis plasma albumin, pre-dialysis triglyceride, iPTH, and ALP (6). For the continuous variables with non-normal distribution, the logarithm transformation was carried out before the regression models were established.

Between Nov 1, 2017, and Oct 31, 2018, 186 patients received hemodialysis treatment in our hospital. The current study included 148 patients of these patients. Patients <18 years old, patients with acute kidney injury or dialysis vintage <90 days, and patients without blood magnesium data were excluded (Figure 1). In the study period, 18 patients received multiple tests of the post-dialysis magnesium concentrations. Only the first test results were used in the current study. 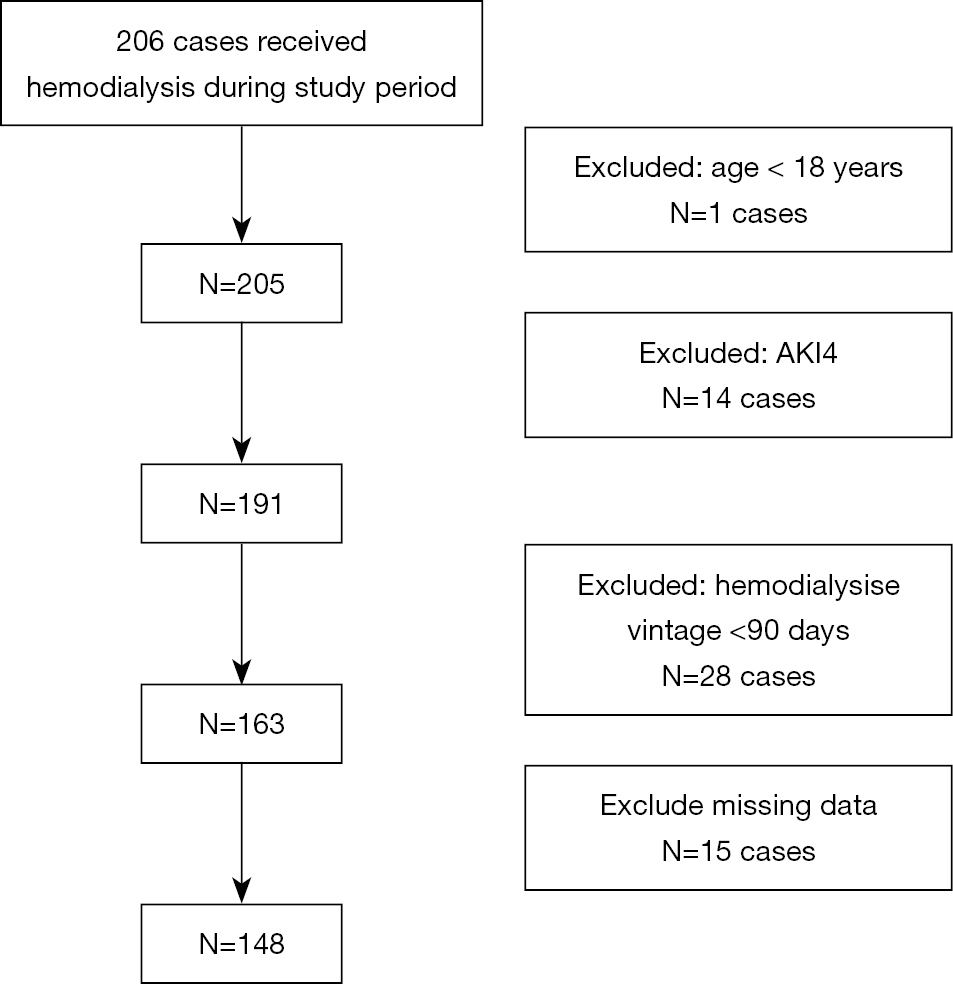 Of the 148 included patients, 96 (64.86%) were male and 52 (35.14%) were female. The patients ranged in age from 22–84 years old, with an average age of 52 years old. Glomerulonephritis (66 cases) was the most common etiology of end-stage renal disease (ESRD). Diabetic nephropathy was also a major cause of ESRD within the cohort (30 cases in total). Other causes included, for instance, lupus nephritis and polycystic kidney disease. In 129 patients, the vascular access in hemodialysis was via autogenous arteriovenous fistula. One hundred and eight patients received hemodialysis treatment 3 times a week, while the other 40 patients received hemodialysis twice a week. In the two weeks prior to undergoing serum magnesium examination, five patients had taken PPI and one patient had taken furosemide. None of the other patients had taken any medications that may have affected the serum magnesium concentration.

The effect of hemodialysis on serum magnesium concentration

Levels of electrolytes before and after dialysis in 148 patients on maintenance hemodialysis were presented in Table 2. The mean pre-hemodialysis serum magnesium concentration was 1.11±0.14 mmol/L. Two patients had hypomagnesemia, 109 patients had hypermagnesemia, and the prevalence of hypermagnesemia was 73.65%. Among the five patients who were taking PPI, the pre-dialysis serum magnesium concentration ranged from 0.93 to 1.16 mmol/L. 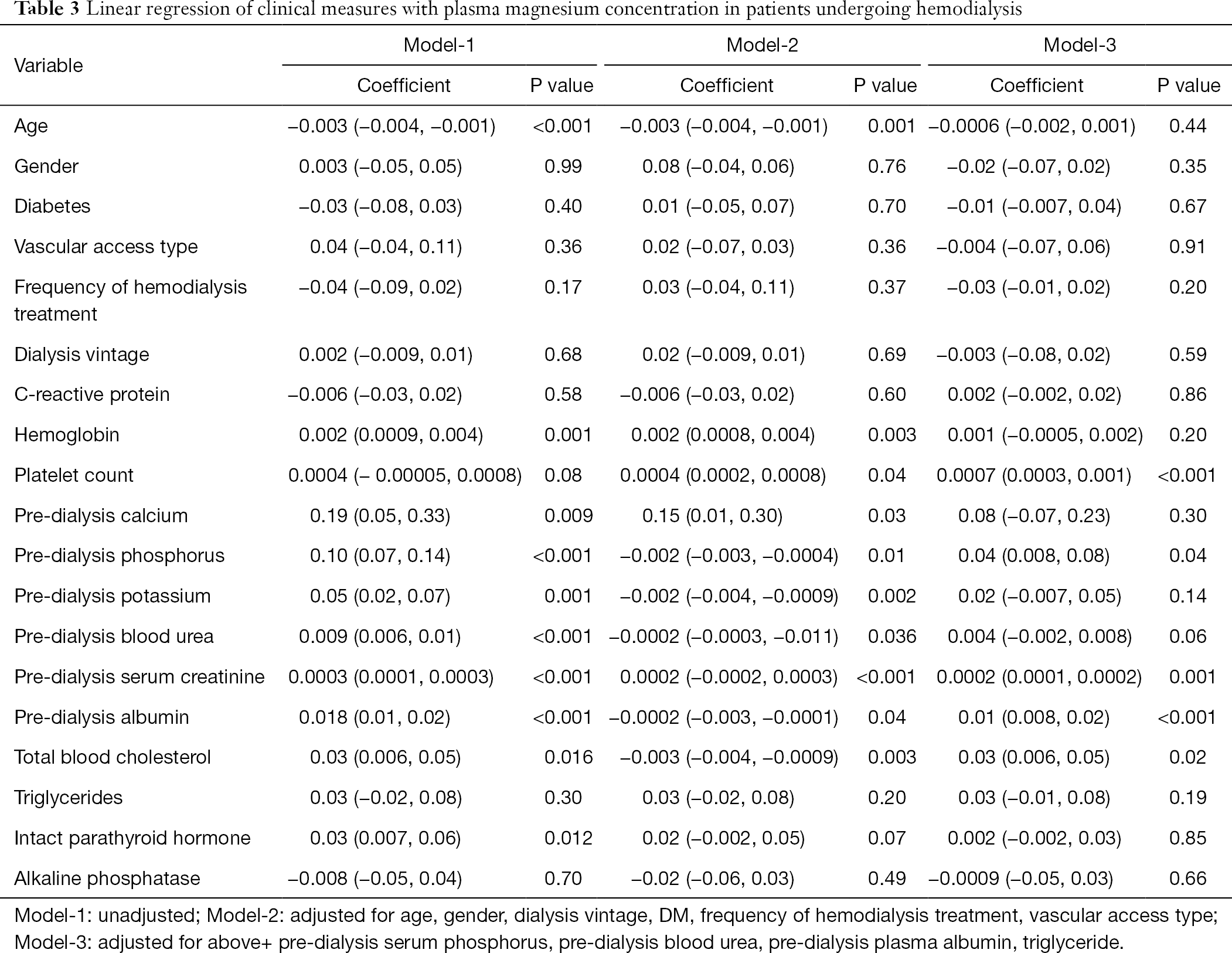 Serum calcium level, calcitriol, and FGF-23 play an important role in the regulation of PTH synthesis and secretion (26). The calcium-sensing receptor of the parathyroid gland is regulated by the level of plasma calcium ions (26), and it can also be affected by magnesium ions. Although the specific mechanism of magnesium ion-regulated PTH secretion has not been completely eliminated, it may inhibit PTH regardless of hypermagnesemia or severe hypomagnesemia (27,28). Previous studies on the relationship between the level of serum magnesium and PTH in dialysis patients produced inconsistent results. Although several studies have shown that low magnesium in hemodialysis patients is associated with increased PTH, other studies do not support this result (3). In this study, no correlation was identified between magnesium concentration and PTH. At present, there is a lack of well-designed research to clarify the relationship between magnesium ions and PTH (3).

Funding: This work was supported by grant from the Scientific Nurturing Program Of Beijing Municipal Hospital (PX2018070).

Reporting Checklist: The authors have completed the STROBE reporting checklist. Available at http://dx.doi.org/10.21037/apm-20-992

Conflicts of Interest: All authors have completed the ICMJE uniform disclosure form (available at http://dx.doi.org/10.21037/apm-20-992). The authors have no conflicts of interest to declare.