An increasing number of patients have received primary percutaneous coronary intervention (PPCI) in China in recent years, and specific problems, especially no-reflow phenomenon, associated with PPCI have drawn greater attention. In the Western world, the incidence of the no-reflow phenomenon ranges from 5% to 50% (1), while in Asia it ranges from 5% to 37% (2,3). Regardless of this variability, the no-reflow phenomenon after PPCI is not a rare event. In recent years, research on how to predict and treat the no-reflow phenomenon has been conducted by many investigators (2-8). Previous studies have demonstrated that compound danshen dripping pills (CDDP) is effective for patients with angina pectoris and its active constituents have bioactivities against myocardial ischemia, inflammation, and angiotensin-converting enzyme which could protect human umbilical vein endothelial cells from injury induced by lipopolysaccharide. Here, we report our retrospective study that was aimed at assessing the effect of CDDP, a popular Chinese traditional medicine, on reducing the no-reflow phenomenon. We further identified a few admission parameters as predictors of the no-reflow phenomenon in Chinese patients undergoing PPCI. We present the following article in accordance with the STROBE reporting checklist (available at http://dx.doi.org/10.21037/apm-20-1516).

In total, 425 consecutive patients were selected from 3,361 patients undergoing PPCI for treatment of coronary heart disease (between January 2009 and March 2012) according to the following inclusion criteria: (I) suffering from acute myocardial infarction (AMI); (II) no diabetes mellitus (DM) on admission; (III) no contraindication for CDDP; (IV) received drug-eluting stents implantation. The diagnosis of AMI was confirmed by angiography. Pre-infarction angina refers to cardiac symptoms lasting less than 30 min that occur within 48 h before onset of infarction. Among these 425 patients, 26 patients were excluded because their treatments with CDDP all occurred earlier than 1 year before PPCI. All procedures performed in this study were in accordance with the Declaration of Helsinki and approved by the ethics committee of our hospital (lot. 20121202).

PPCI and the no-reflow phenomenon

Pharmacological treatment before PPCI was done according to the following Chinese guidelines: 300 mg aspirin (chewed, Bayer) and 300 mg oral clopidogrel (Sanofi Aventis) immediately after admission, and intravenous unfractionated heparin at a dose of 70 U/kg of body weight. PPCI procedures were performed by experienced doctors using femoral or radial approach, and drug-eluting stents were implanted in all patients. All patients were treated with maintenance doses of aspirin (100 mg once daily indefinitely) and clopidogrel (75 mg once daily for 1 year). Other medications (including angiotensin-converting enzyme inhibitors, angiotensin receptor blockers, statins, and β-receptor blockers) were administered according to guidelines. Angiograms were analyzed using a validated quantitative coronary angiographic system (MEDIS, CMS 4.0, Leiden, The Netherlands). Myocardial blush grade immediately after PPCI was evaluated by 2 experienced investigators, who were otherwise blinded to all clinical data. The perfusion status of the infarction-related artery (IRA) was assessed in accordance with the myocardial blush grade. No-reflow phenomenon was defined as a thrombolysis in myocardial infarction (TIMI) flow grade <3 or 3 with an MBG of 0–1.

A total of 399 consecutive patients undergoing PPCI for AMI were identified. Among the 399 patients (mean age, 59.5±11.7 years old), 293 patients (73.4%) were male. In this study, we excluded patients with DM because DM is a contraindication for CDDP. Firstly, patients were divided into 2 groups: the CDDP group, defined as long-term treatment with CDDP; and the NCDDP, defined as not treated with CDDP within a year before PPCI. Clinical characteristics of both groups are summarized in Table 1. As can be seen, there is a significant difference of no-reflow incidence between these 2 groups (9/68 vs. 87/331, 13.2% vs. 26.3%, P=0.0219). Also, we found that the serum levels of high-sensitivity C-reactive protein (hs-CRP), interleukin-6 (IL-6), and brain natriuretic peptide (BNP) in the CDDP group were significantly lower than those in the NCDDP group (P=0.0270, 0.0155, and 0.0032, respectively). 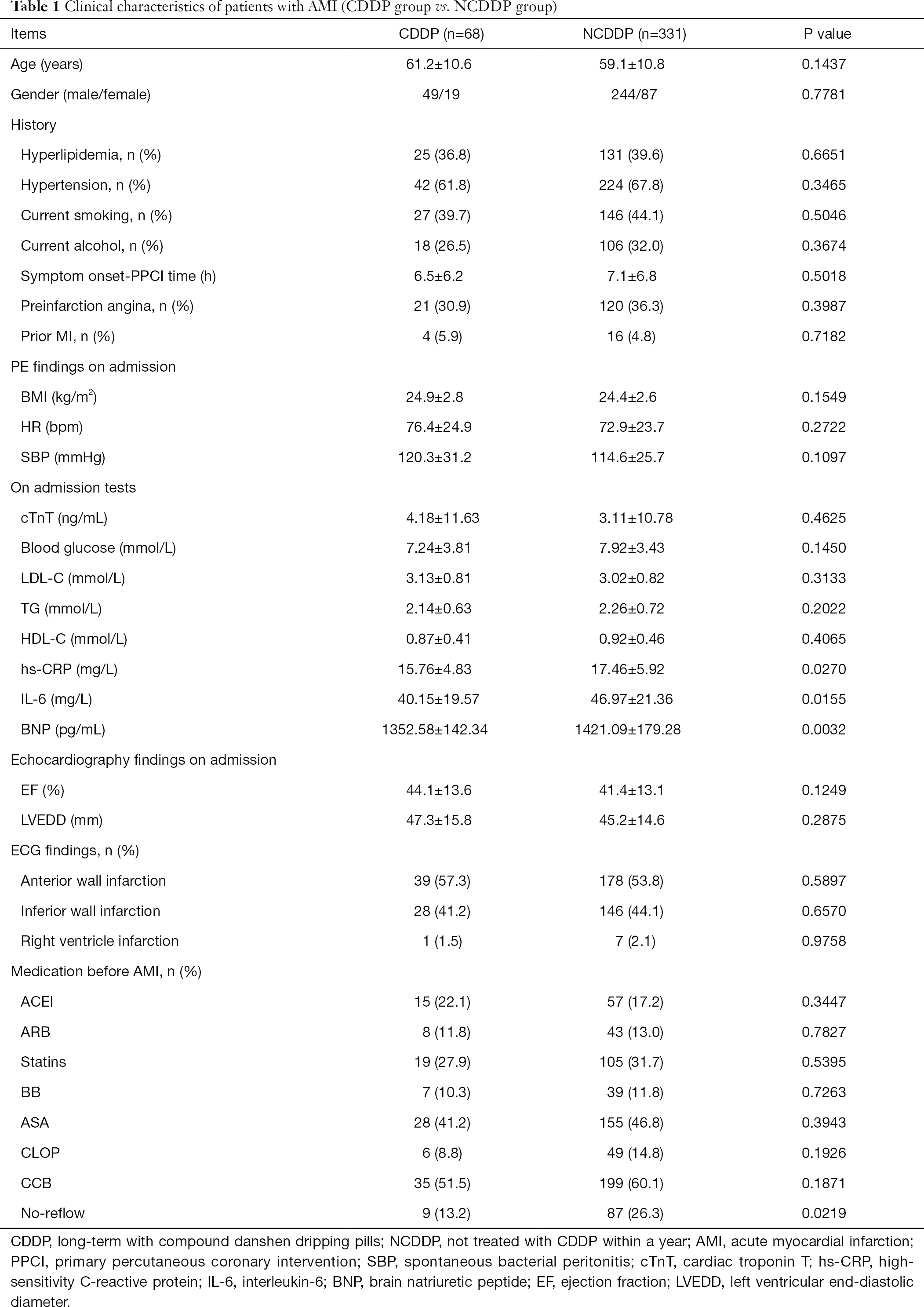 The no-reflow phenomenon occurred in 96 patients, and 24.1% of 399 non-DM patients undergoing PPCI. Patients were then divided into 2 groups: the no-reflow group (n=96) and the reflow group (n=303). Clinical characteristics of these 2 groups are summarized in Table 2. In a comparison of the no-reflow group and the reflow group, the following items were found to be statistically different: number of prior myocardial infarction (MI), systolic blood pressure (SBP), cardiac troponin T (cTnT), hs-CRP, BNP, and IL-6 on admission, ejection fraction (EF), left ventricular end-diastolic diameter (LVEDD), number of anterior wall infarctions, and number of patients with long-term CDDP treatment (P all <0.05, Table 2). 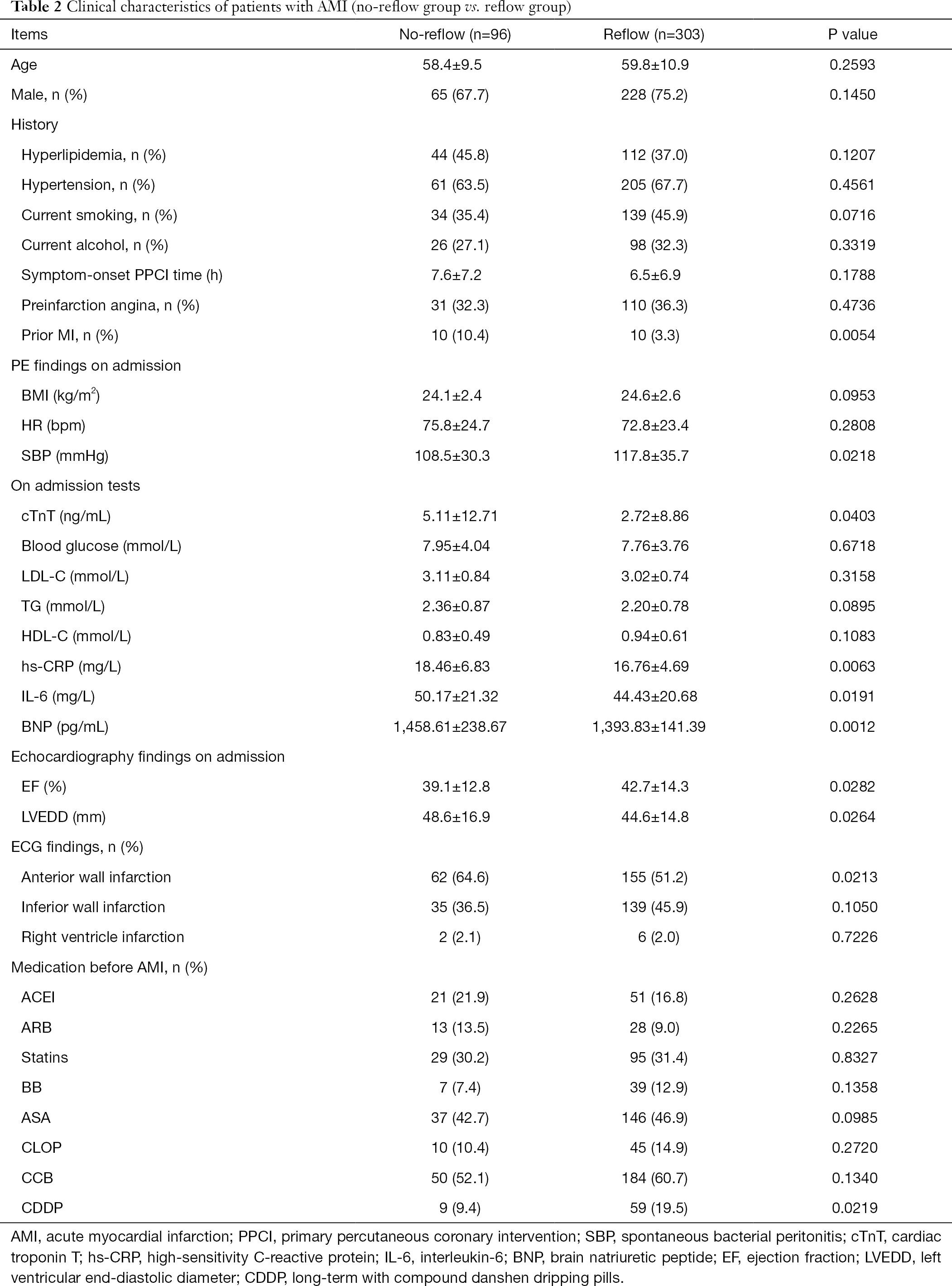 As mentioned above, number of prior MI, SBP, cTnT, hs-CRP, BNP, and IL-6 on admission, EF, LVEDD, number of anterior wall infarctions, and number of patients with long-term CDDP treatment were significantly different between the no-reflow group and the reflow group, according to univariable analysis. Further multivariate stepwise logistic regression analysis indicated that these factors were all independent predictors of the no-reflow phenomenon in non-DM patients receiving PPCI (Table 3). With an odds ratio (OR) of 0.44 (95% CI: 0.89–0.17, P=0.0176), long-term treatment with CDDP appeared to be a protective factor for the no-reflow phenomenon.

The no-reflow phenomenon has been demonstrated to be associated with a poor prognosis after primary coronary intervention in patients with AMI. No-reflow predicts early post-infarction complications, reduces myocardial salvage, increases infarct size, worsens left ejection fraction, and increases mortality. The underlying mechanism of no-reflow includes: (I) distal atherothrombotic embolization; (II) ischemic injury; (III) reperfusion injury; and (IV) individual predisposition of coronary microcirculation to injury (1). CDDP have been used in China for a long time. Some randomized controlled trials have shown that CDDP treatment is more effective than isosorbide dinitrate in treating angina pectoris (9). Abundant research has demonstrated that CDDP has multiple effects and therapeutic targets in the cardiovascular system, meaning it has a potential effect on the no-reflow phenomenon. Danshen (which is the main ingredient of CDDP) and its active tanshinones and isotanshinones compounds have bioactivities against myocardial ischemia, inflammation, and angiotensin-converting enzyme (10). An in vitro study revealed that CDDP could protect human umbilical vein endothelial cells from injury induced by lipopolysaccharide (11). Pan et al. found that salvianolic acid A, the water-soluble component from the root of danshen prevents ischemia/reperfusion-induced myocardial damage by reducing necrosis and apoptosis in isolated rat hearts and cardiomyocytes. This effect was partially associated with the Akt signaling pathway (12). In another study, Huang et al. demonstrated that salvianolic acid A inhibits platelet activation and arterial thrombosis via inhibition of phosphoinositide 3-kinase (13). Another in vivo study found that after treatment with CDDP (20 pills, bid or 10 pills tid) for 3 months, endothelium-dependent vasodilation of the brachial artery improved significantly in patients with a high risk of coronary heart disease (14,15). CDDP also could increase the serum level of nitric oxide and 6-Keto-PGF-1a while decreasing the serum level of endothelin (ET) and thromboxane B2 (TXB2), which indicates improvement of endothelium function (15). Our results, together with these previous results, indicate preventive effect of CDDP for no-reflow phenomenon.

Our data also revealed some independent predictors of no-reflow phenomenon. Among these factors, prior MI, SBP, hs-CRP, BNP on admission, EF, LVEDD, and anterior wall infarction have been reported in previous studies (2-8). Our results were consistent with these studies. Meanwhile, in our study, cTnT and IL-6 on admission were reported for the first time to be predictors of no-reflow phenomenon. Previous studies have demonstrated that IL-6 could downregulate tissue factors pathway inhibitors in vascular endothelial cells (16). Subgroup analysis of the IABP-SHOCL-trial showed that IL-6, together with other inflammatory factors including IL-7, -8, and -10, could be a valuable predictor for mortality of infarct-related cardiogenic shock patients (17). IL6R signaling seems to have a causal role in the development of coronary heart disease and IL6R blockade could provide a novel therapeutic approach to prevention of coronary heart disease (18). Actually, IL-6 is one of the most important stimuli of CRP release. IL-6 has also been shown to significantly correlate with increased left atrial size, an important risk factor for developing atrial fibrillation (19). All these findings suggest that IL-6 possibly plays an important role in the no-reflow phenomenon. As for cTnT, Giannitsis et al. found that troponin T on admission level predicts clinical outcomes, TIMI flow, and myocardial tissue perfusion after PPCI for acute ST-segment elevation myocardial infarction (20). However, they did not precisely analyze the relationship of cTnT with the no-reflow phenomenon. Later, Nguyen et al. demonstrated that elevated cTnT on admission was associated with a higher corrected TIMI frame count (P=0.04) and with a trend toward worse myocardial blush grade at the end of the procedure (P=0.069), indicating a higher degree of microvascular obstruction, which is a possible mechanism of the no-reflow phenomenon (1,21).

According to the results from previous studies and our present research, a combination of some regular on-admission parameters including CRP, IL-6, cTnT, and BNP, with other physical examination and echocardiography findings before PPCI, may provide a more powerful tool to predict the no-reflow phenomenon in advance of PPCI. This hypothesis needs to be investigated and confirmed in a large population of this patient type in the future.

Some limitations in our study should also be addressed. The study population in our present research seemed to be relatively small and many patients were excluded because of DM which is the main coexisting disease of coronary heart disease. Meanwhile, since this was a retrospective study, it was possible that there were some variation in parameters from the blood test. A strictly designed prospective study is needed in the future to further evaluate the protective effect of CDDP on the no-reflow phenomenon.

Reporting Checklist: The authors have completed the STROBE reporting checklist. Available at http://dx.doi.org/10.21037/apm-20-1516

Conflicts of Interest: All authors have completed the ICMJE uniform disclosure form (available at http://dx.doi.org/10.21037/apm-20-1516). The authors have no conflicts of interest to declare.

Ethical Statement: The authors are accountable for all aspects of the work in ensuring that questions related to the accuracy or integrity of any part of the work are appropriately investigated and resolved. All procedures performed in this study were in accordance with the Declaration of Helsinki and approved by the ethics committee of our hospital (lot. 20121202).