Breast cancer is one of the most common types of malignant tumor worldwide. With an annually increasing prevalence rate, it poses a serious threat to human health. In 2018, breast cancer was second only to lung cancer by incidence and the mortality rate is first in women (1,2). Postoperative adjuvant chemotherapy is an effective treatment for breast cancer. Currently, anthracyclines are included in the first-choice postoperative chemotherapy plan for breast cancer patients (3). Although anthracyclines can significantly improve the survival rate of breast cancer patients and reduce recurrence and metastasis, it can induce dose-related (4) myocardial toxicity, which causes irreversible heart damage (5-7).

At an early stage, monitoring cardiac function is based entirely on relatively insensitive indicators such as symptoms and left ventricular ejection fraction (LVEF), which may lead to the opportunity for early detection and timely treatment being missed (4,8,9). Therefore, there has been a considerable amount of research centered on anthracycline-induced changes in left ventricular overall function during chemotherapy after breast cancer surgery (10-14). In contrast, studies on the changes in right ventricular overall and local function are limited (15). Nevertheless, the structure and overall and local functions of the right ventricle are highly important to the incidence rate and mortality of heart and lung diseases.

Three-dimensional speckle-tracking imaging (3D-STI) is a new technology that combines two-dimensional speckle-tracking imaging (2D-STI) with real-time three-dimensional echocardiography (RT-3DE) and possesses the advantages of these two techniques (16). It can track speckles in three dimensions (simultaneously eliminating noise and improving accuracy) through acquisition and can reflect the function and movement of the heart muscle with higher precision, facilitating more accurate evaluation of the overall and local structure, movement, and function of the heart (17,18). Dexrazoxane is an antitumor adjuvant that can be used to alleviate or reduce the cardiotoxicity induced by chemotherapy with anthracycline antibiotics (such as doxorubicin). For improved clinical judgment of patients’ conditions, treatment selection, and prognostic evaluation, the accurate and quantitative evaluation of the right ventricular structure and function is especially important (19,20). In this study, 3D-STI was used to evaluate the effect of dexrazoxane based on the mechanical properties of the right ventricular myocardium in breast cancer patients who received pirarubicin chemotherapy after radical mastectomy, and its clinical value was explored.

We present the following article in accordance with the CONSORT reporting checklist (available at http://dx.doi.org/10.21037/apm-20-1074).

Between January 2017 and December 2018, 64 patients with invasive breast cancer who were hospitalized for chemotherapy (with regular CTF chemotherapy) in the Thyromammary Surgery Department of our hospital were selected for this prospective study. The patients had an average age of 33.2±8.3 years (22–43 years) old. Using a random number table, the patients were randomly divided into two groups, the experimental group (with dexrazoxane added) and the control group (without dexrazoxane), with 32 patients in each group.

The inclusion criteria, all of which had to be met, were as follows: (I) normal indexes of liver and kidney function, electrocardiograph (ECG) and chest radiograph; (II) conventional echocardiography showed no significant abnormalities (including cardiac function and atrioventricular size); (III) no multiple distant metastases; (IV) had not previously received pirarubicin; and (V) had not previously received radiotherapy (15).

All procedures performed in this study were in accordance with the Declaration of Helsinki and this study was approved by the medical ethics committee of our hospital. All selected patients were informed and signed informed consent was obtained from each patient.

Echocardiography was performed with Color Doppler Ultrasonic Diagnosis Apparatus (Toshiba Artida SSH-880CV) equipped with three-dimensional analysis software. The subjects were instructed to lie on their left side and to breathe calmly while 12-lead routine ECG was recorded in a quiet state. Conventional echocardiography (PST-30SBT probe, frequency 2.5–5.0 MHz) combined with three-dimensional data acquisition (PST-25SX probe, frequency 1–3 MHz, frame volume 20–25 frames per second) was performed. The data were measured in triplicate, collected and averaged.

Acquisition of conventional parameters of the right ventricle

According to the consensus of the American Society of echocardiography (ASE) and the European Association of Cardiovascular Imaging (EACVI) on the updated Guidelines for the Diagnosis of Adult Echocardiography published in 2015, the conventional echocardiography parameters of the right ventricle were measured as follows: right ventricular fractional area change (RVFAC); tricuspid annular plane systolic excursion (TAPSE) measured in M-type; and Doppler tricuspid annulus systolic blood flow velocity of tissues (S’) measured by Tissue Doppler Imagine (TDI).

Acquisition of 3D-STI parameters of the right ventricle 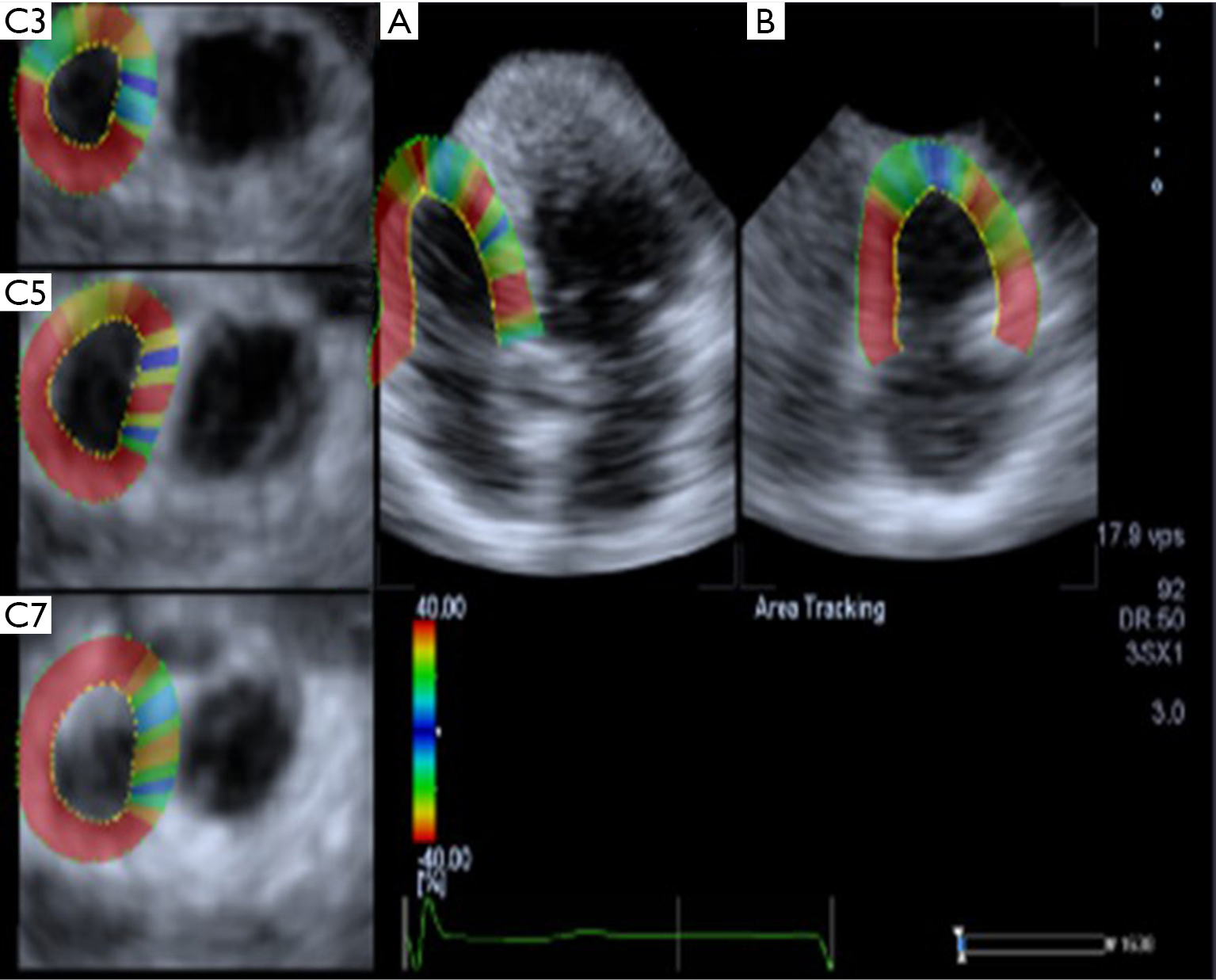 On the day before the chemotherapy commenced and on the morning after the completion of the chemotherapy, 2 mL of peripheral venous blood was collected from the patients (who were fasting). The serum was separated from each sample within 1 h. The levels of hs-cTnI and N-terminal B-type pro-natriuretic peptide (NT-proBNP) were measured using Vidas-Blue automatic fluorescence immunoassay analyzer.

Comparison of patients before and after chemotherapy in the experimental group

Comparison before and after chemotherapy in the control group 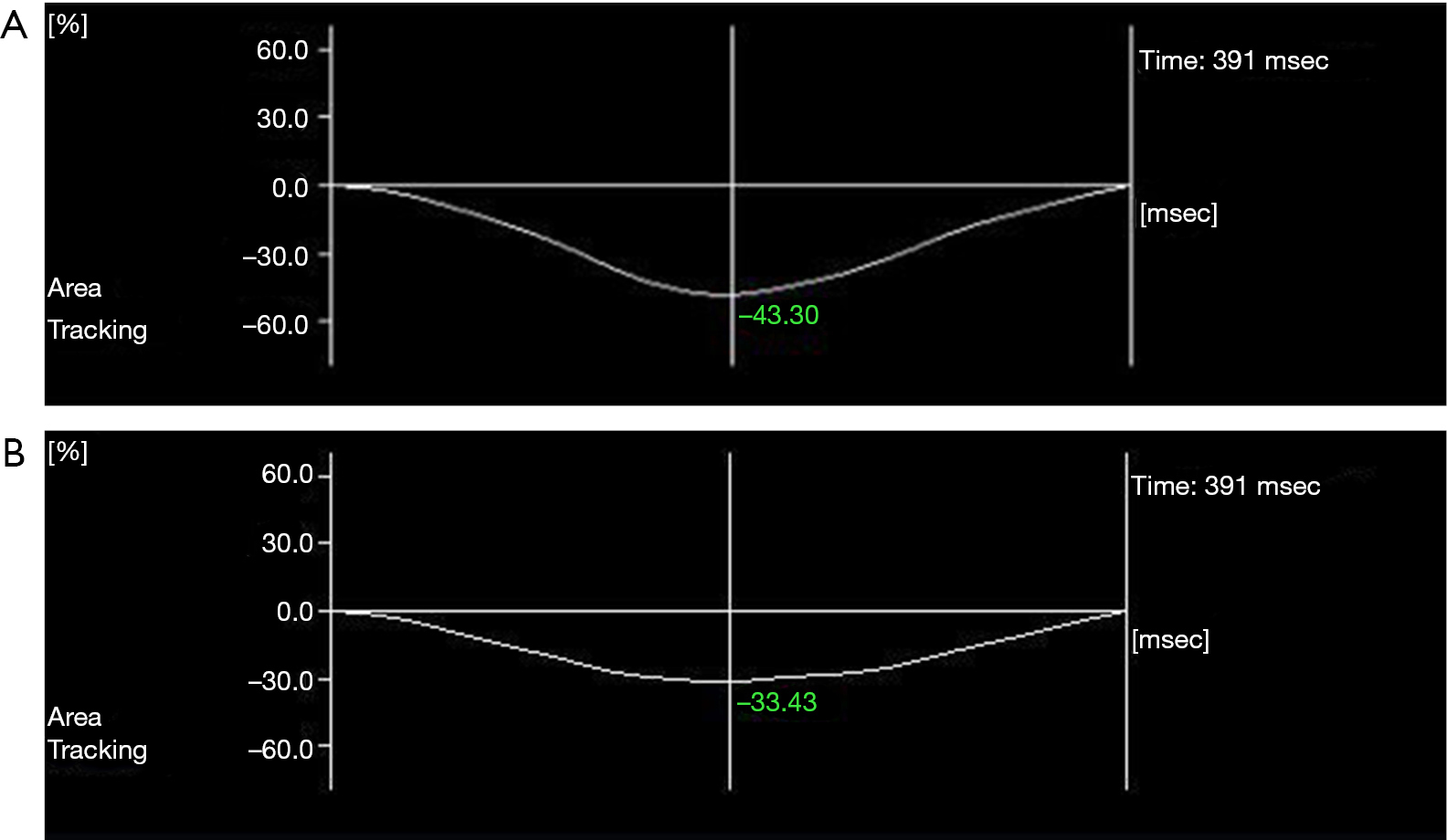 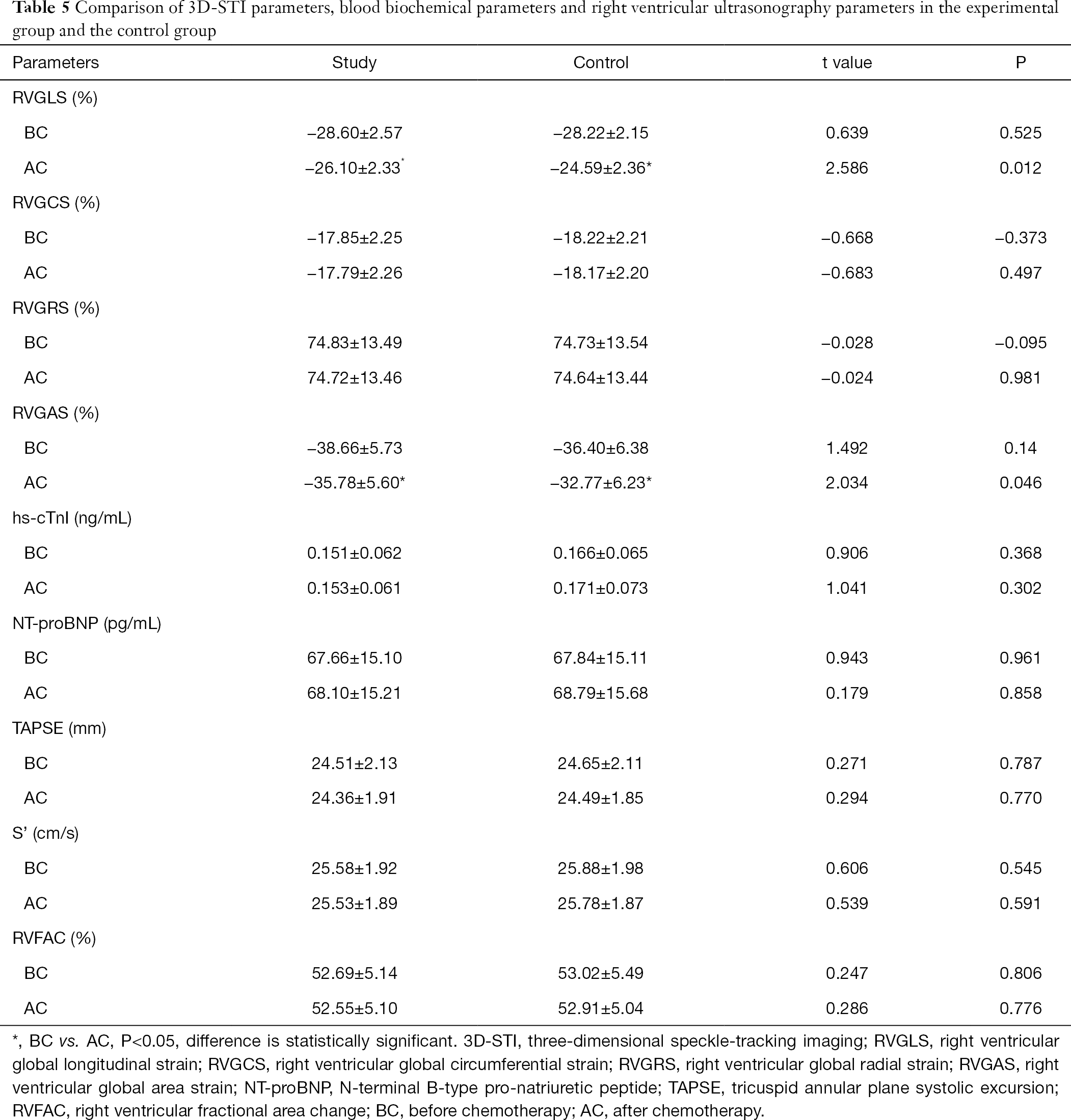 In this study, the mechanical properties of the right ventricular myocardium and the changes after the use of dexrazoxane combined with anthracycline drugs for chemotherapy in breast cancer patients following radical mastectomy were evaluated by three-dimensional speckle-tracking ultrasonography, with the aim of guiding the choice of clinical treatment.

It is currently believed that the main mechanism of anthracycline toxicity is topoisomerase 2β inhibition, which activates the cell death pathway and inhibits the biological origin of mitochondria. The combination of dexrazoxane and anthracycline drugs can interfere with topoisomerase 2β binding and reduce the toxicity and the risk of subsequent heart failure in high-risk patients (28).

At present, dexrazoxane is the only protective agent against cardiotoxicity caused by Food and Drug Administration (FDA)-approved anthracycline drugs (it has been listed in the Guidelines for Clinical Operation of Cancer Chemotherapy and Radiotherapy Protective Agents in the United States (29). Traditionally, it has also been recognized as a precursor drug of ADR-925, a metabolite of iron chelation (30).

As a cytotoxic drug, by blocking the catalytic activity of DNA topoisomerase-II and the average distribution of DNA monomers during mitosis (31,32), dexrazoxane exerts an antitumor mechanism. As an ethylenediaminetetraacetic acid analogue, dexrazoxane is hydrolyzed into an open-loop product of ICRF-198 in cardiomyocytes. The chelation of ICRF-198 and some intermediates with ions can inhibit Fe3+-pirarubicin chelate, reduce the induced production of free radicals, and ultimately inhibit the cardiotoxicity of pirarubicin (33,34). It therefore exerts a protective effect on the myocardium (35-39), reduces myocardial cell death, alleviates the degree of inflammatory response, and reduces tension in the blood vessels (40). Roti Roti et al. (41) showed that dexrazoxane inhibited the catalytic activity of topoisomerase II, leading to the decrease of the toxic effect of pirarubicin in mouse ovarian cells. Experimental (42) and clinical (34,43,44) studies have shown that the dexrazoxane in appropriate dose proportions with pirarubicin can effectively reduce the cardiotoxicity caused by the latter such as reduces the incidence of heart events and congestive heart failure (45). Moreover, dexrazoxane does not undermine the effect of pirarubicin (46,47), does not significantly increase the toxicity of drugs, and does not have any adverse effect on the survival rate (44), or increase the incidence of secondary malignant tumors (46,47). Dexrazoxane not only offers protection from the cardiotoxicity caused by epirubicin (48,49), but may also be used to treat pre-existing myocardial damage (50). Jirkovský et al. believed that early use of dexrazoxane could effectively prevent and reduce the cardiotoxicity caused by anthracyclines in breast cancer patients (51).

Reporting Checklist: The authors have completed the CONSORT reporting checklist. Available at http://dx.doi.org/10.21037/apm-20-1074

Conflicts of Interest: All authors have completed the ICMJE uniform disclosure form (available at http://dx.doi.org/10.21037/apm-20-1074). The authors have no conflicts of interest to declare.

Ethical Statement: The authors are accountable for all aspects of the work in ensuring that questions related to the accuracy or integrity of any part of the work are appropriately investigated and resolved. All procedures performed in this study were in accordance with the Declaration of Helsinki and this study was approved by the medical ethics committee of our hospital (No. LW20161210001). All selected patients were informed and signed informed consent was obtained from each patient.