Extra-nodal natural killer/T-cell lymphoma (ENKTL) is a common extra-nodal aggressive lymphoma with higher incidence rate in Asia, Latin America and South America than Western countries, accounted for 1–10% of Non-Hodgkin’s lymphoma in comparison with 12.0–17.1% in China (1,2). ENKTL, nasal type often primarily occurs in the midline facial structure, including the nasal cavity, nasopharynx (sinus), oropharynx and throat, and the most frequently affected or metastatic sites outside the nose including the skin and gastrointestinal tract. Extension to the male genitourinary system such as penis or glans is very rare. L-asparaginase-based chemotherapy is a preferred regimen for early and advanced ENKTL, however, there is still 17.8% patients progress to recurrence or metastasis (3). The frequent metastatic sites in ENKTL is including the skin and gastrointestinal tract, extending to the male genitourinary system such as penis is very rare. In literature, there was only three secondary penile ENKTL English cases and one primary ENKTL Chinese case reported, in which the longest survival time was only 4 months after second recurrence (4-7). There is no report about maintenance therapy for peripheral T-cell lymphoma (PTCL) with histone deacetylase (HDAC) inhibitors, let alone ENKTLs. Here, we reported a case of penile metastasis ENKTL secondary from the nasal cavity reached a complete remission (CR) after treatment and the PFS time is 12 months undergoing with HDAC inhibitor as maintenance therapy. We present the following case in accordance with the CARE Reporting Checklist. 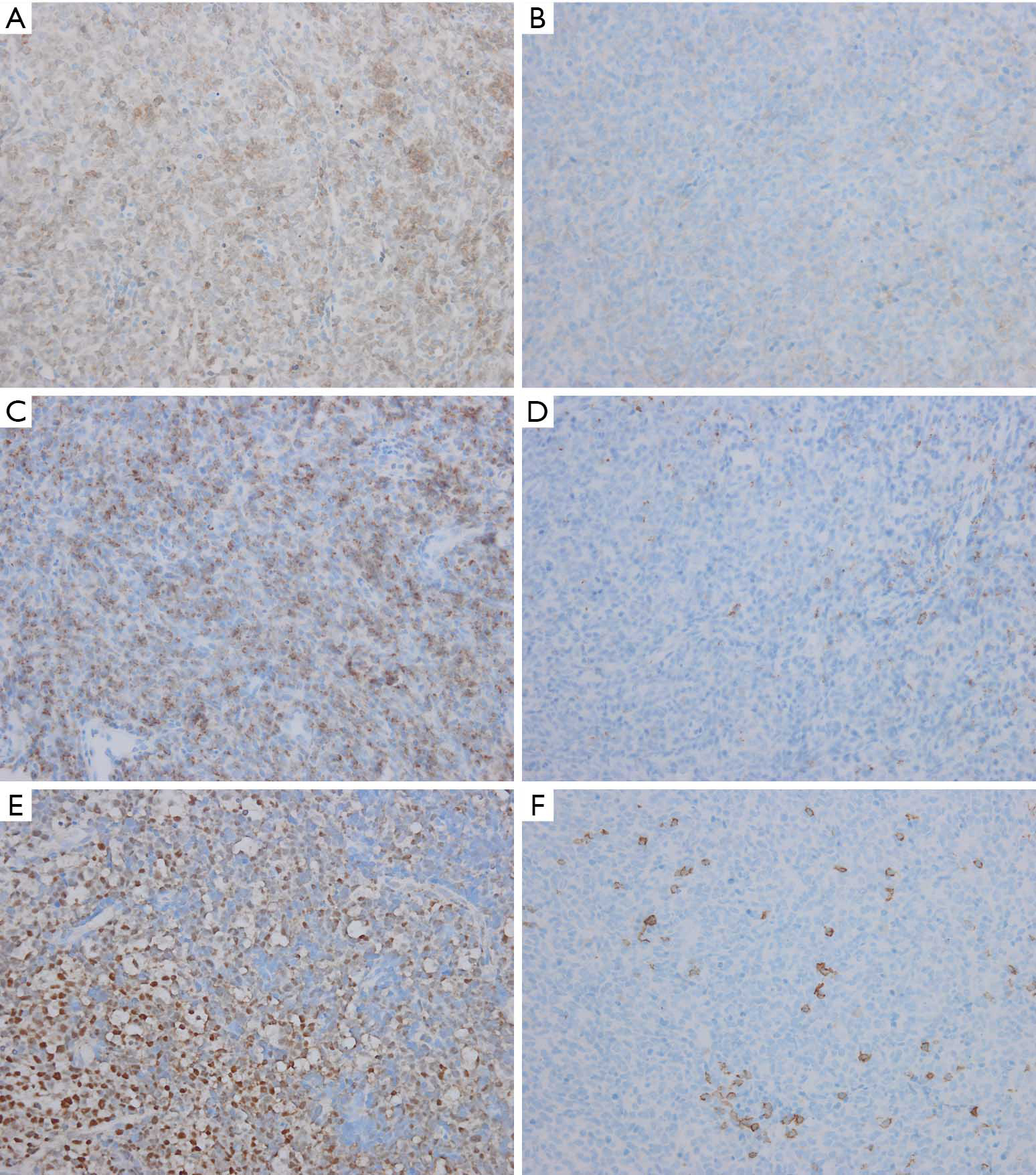 Nonetheless, 8 months later after radiotherapy, the patient appeared balanitis without response to anti-infection treatment (Figure 2A). The physical examination found a 3 cm × 3 cm mass in the glans penis covered with ulcers. In workup, white blood cell and neutrocyte proportion was normal, and human immunodeficiency virus (HIV) was negative, while EBV-DNA copies were 2.79×10E01 copies/mL, which was higher than before, indicating a possibility of tumor relapsed. The 18F-FDG PET/CT scan revealed a higher SUV value in the penis than liver and no other positive findings (Figure 2B). Cerebrospinal fluid biopsy was also examined to be negative. Accordingly, we operated biopsy of the glans ulcer and confirmed the ENKTL diagnosis. We administered modified-SMILE regimen (methotrexate, dexamethasone, ifosfamide, etoposide and L-asparaginase) with intrathecal chemotherapy (cytarabine, methotrexate and dexamethasone) for four cycles. The glans ulceration was rapidly healing following the first cycle and a CR was attained after two cycles confirmed by 18F-FDG PET-CT scan (Figure 2C,D). Immunohistochemical staining showed the tissue was positive for CD3, TIA-1, and EBER, negative for CD56, D20. There was no doubt of the diagnosis of ENKTL with metastasis of penis (Figure 3). Since the poor prognosis of metastatic ENKTL and unfitness for hematological stem cell transplant (HSCT), we applied glans radiotherapy (200 cGy/23 f/4,600 cGy) and following with HDAC inhibitor Chidamide (epidaza, 20 mg, biw, po) as maintenance therapy, which was resulted in a progression-free survival (PFS) of 12 months (the timeline see Figure 4). Of note, the Chidamide is less toxic and no grade 3–4 adverse events were found in the course of medication. 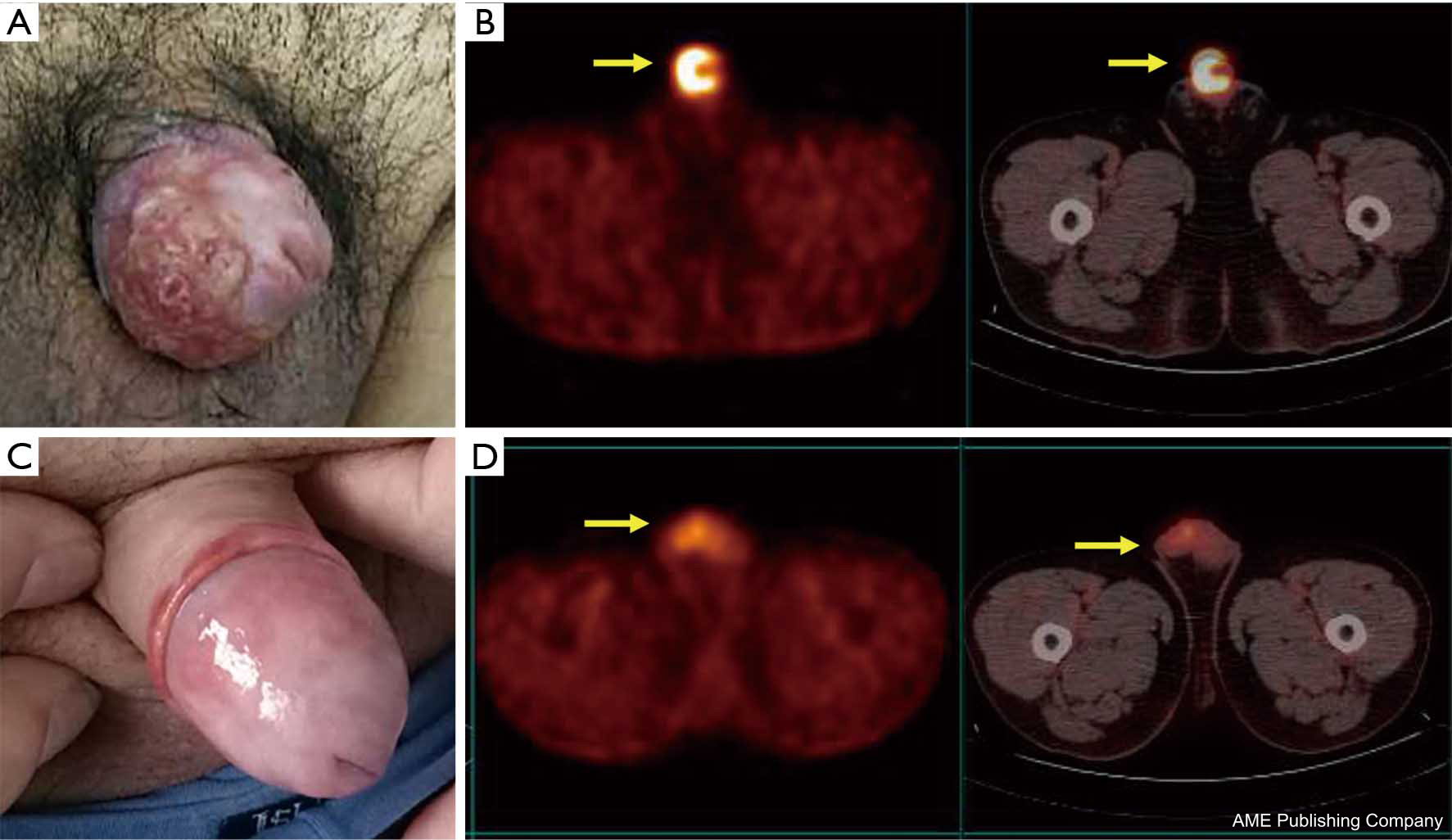 Figure 2 Clinical manifestation and PET/CT imaging of the glans. (A) showed the lesion on the glans; (B) showed the metastasize of the glans in PET/CT image; (C) depicts the CR of the disease in the same area after treatment; (D) is the PET/CT image when the patient achieved CR. The position indicated by the arrow represents the metabolic changes of the focus in PET/CT. CR, complete remission. 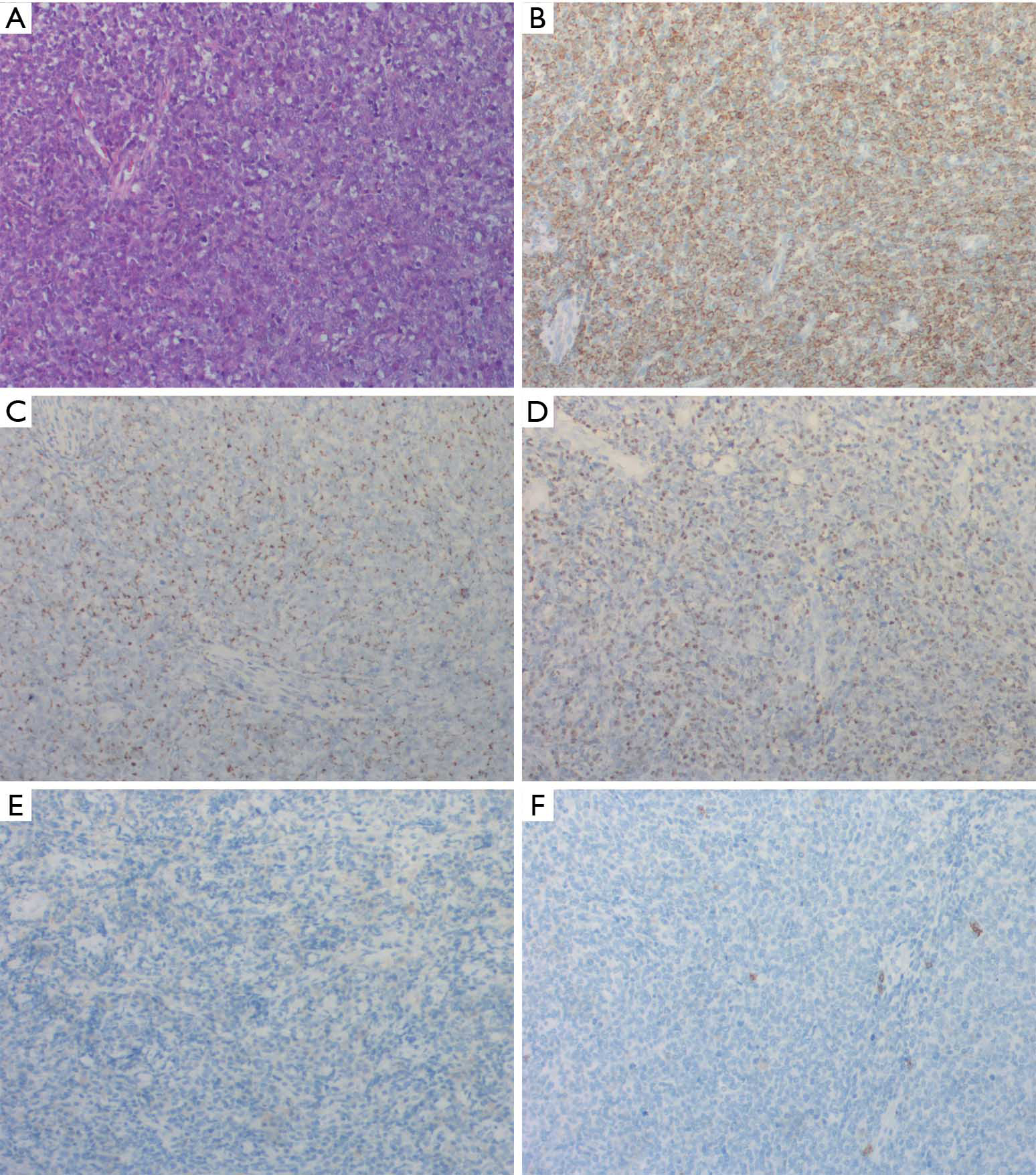 Penis is a rare site involved in malignant tumors and the reported incidence ranging from 0.58 to 1.3 cases/100,000 individuals, in which squamous cell carcinoma is the most common type (8,9). We searched literatures in PubMed and found only four reported penis infiltrated ENKTL metastasis cases (Table 2) available. These cases predispose to middle age and the clinical presentations of which are all manifested as nodules, masses and ulceration. The longest survival time was only 4 months after second recurrence despite the use of L-asparaginase-based chemotherapy. Li et al. summarized the clinical characteristics of penile lymphoma and found that the clinical presentations of penile lymphomas are often non-specific and subtle, including nodules, masses, ulceration and diffuse penile swelling, and more rare symptoms include dysuria and phimosis (6). Among the reviewed cases, 69% exhibited ulceration, which may be a sign that indicates a possible diagnosis of penile lymphoma. As mentioned above, it is highlight re-biopsy for any suspicious site to make a definite diagnosis, especially for patients with a history of cancer.

Penile metastatic lymphoma appears to indicate a worse prognosis, and there has no standard treatment for relapsed or refractory ENKTLs (R/R ENKTLs), much less penile metastasis. Clinical studies have suggested that L-asparaginase-based chemotherapy is preferred for advanced ENKTL, and SMILE regimen is effective in both initial stage III–IV and R/R NKTCL, with objective response rate (ORR) 67–77% and CR rate 50–66% (10,11). The significance of local radiotherapy is not clear and whether testicular radiotherapy should be covered is debatable, which needs to be confirmed with further clinical studies. Although the exact value of autologous HSCT remains uncertain, numerous retrospective studies have shown that patients with advanced disease or high risk to recurrence can benefit from auto-transplantation, while allogeneic transplantation is currently in the exploratory stage because of its high treatment-related risks, and it’s possible to try to treat refractory patients after autologous transplantation (3,12). Chidamide, an innovative new drug independently developed in China, is designed to selectively inhibit the activity of HDAC1, 2, 3, and 10 following oral administration, and was approved by China Food and Drug Administration (CFDA) in 2014 to use in the second-line treatment of PTCL. Chidamide was tested to arrest cell cycle progression at the G0/G1 phase, and induced apoptosis in the NKTCL cell lines, which also suppressed the phosphorylation levels of proteins in the AKT/mTOR and MAPK signaling pathways and activated the DDR cell cycle checkpoint pathway, that is, the ATM-Chk2-p53-p21 pathway in vitro. Shi et al. analyzed the efficiency in R/R ENKTL is about 19% (3/16) (13). We look forward more experiments to verify the therapeutic advantage of HDAC inhibitor in ENKTLs and such a good response to our patient may be a one-sided confirmation. To some degree, we suppose HDAC inhibitor as maintenance therapy is of value in keeping a long PFS in metastasis ENKTL patients who are not candidates for HSCT.

Exploring effective targets in the R/R ENKTLs is urgent and epigenetic dysregulation may broaden our understanding of ENKTL. Studies have shown that HDAC inhibitors are effective in B-cell lymphoma with mutations in EP300, CREBBP, EZH2 and MEF2B genes. To highlight in this patient is that BCOR gene mutations occur specifically in ENKTL; retrospective statistical analysis of multiple genes shows a BCOR mutation frequency of 32% (14). The patient’s sample showed the BCOR gene p.Q918X exon 4 truncation mutation, which causes the stop codon encoded in advance to generate a truncated protein. The encoded product of the BCOR gene is a POZ-zinc finger structure-specific interaction transcription co-repressor, which can be regulated by a target gene such as the proto-oncogene BCL-6 promoter sequence. Due to the high frequency and distortion patterns, as a tumor suppressor gene, BCOR may play an important role in the pathogenesis of ENKTL. Another gene CDKN1B, encodes p27 protein, which is a negative regulator of cell cycle, blocking cells from G1 to S phase; its low expression is a good prognostic marker of acute myelocytic leukemia (AML) but leads to a significant reduction in the survival rate of lymphoma and a triple increase in the risk of death (15).

Taken together, this case broadened the spectrum of differential diagnosis of penile tumors and exhibited the value of detailed history taking and comprehensive workup. The efficacy of HDAC inhibitor in ENKTL needs more clinical trials to confirm, but our case presented as long PFS as 12 months to prove its efficacy. Also, with the development of second-generation sequencing technology, gene detection is becoming increasingly important in guiding the therapy in relapsed/refractory NKTCL. This case may illuminate future treatment of similar cases or be part of value to further clinical trials.

Conflicts of Interest: All authors have completed the ICMJE uniform disclosure form (available at http://dx.doi.org/10.21037/apm-19-430b). The authors have no conflicts of interest to declare.

Ethical Statement: The authors are accountable for all aspects of the work in ensuring that questions related to the accuracy or integrity of any part of the work are appropriately investigated and resolved. All procedures performed in studies involving human participants were in accordance with the ethical standards of the institutional and/or national research committee(s) and with the Helsinki Declaration (as revised in 2013).Written informed consent was obtained from the patients for publication of this case report and any accompanying images.