Endoscopic incision and selective cutting for primary treatment of benign esophageal anastomotic stricture: outcomes of 5 cases with a minimum follow-up of 12 months

Benign anastomotic stricture of the esophagus after surgical resection for esophageal cancer occurs commonly and requires repeated dilation to maintain luminal patency periodically (1-5). For patients who ignored regular follow-up, however, they missed the optimal opportunity for endoscopic balloon dilation (EBD) until intolerant dysphagia happened. Affected patients often suffer from severe dysphagia and vomiting, which impair their quality of life and food intake drastically, and even result in nutritional disorders. Comparison with EBD that could successfully respond for most of benign anastomotic strictures, endoscopic incision and cutting (RIC) has achieved exciting results in severe and refractory cases (6,7). The RIC as a novel technique has shown feasibility and efficacy for patients with severe esophageal anastomotic stricture. However, EIC leads to a wound surface like circumferential endoscopic submucosal dissection (ESD), which facilitates the formation of postoperative stricture.

In this study, a modified RIC named endoscopic incision and selective cutting (EISC) is presented as primary treatment for 5 patients with benign esophageal anastomotic stricture and the efficacy and safety during at least 12 months follow-up were evaluated.

We present the following article in accordance with the STROBE reporting checklist (available at http://dx.doi.org/10.21037/apm-20-1090).

All procedures performed in this study were in accordance with the Declaration of Helsinki. This study was approved by the Ethics Review Committee of the Second Hospital of Jilin University. Signed informed consent was obtained from each patient.

This retrospective study was approved by the ethics committee of the Second Hospital of Jilin University. Informed consent was obtained from all 5 patients before the procedure was performed. All patients were informed of possible adverse events and other possible treatment options. The inclusion criteria for enrollment in the study were as follows: Benign esophageal anastomotic stricture was diagnosed on the basis of clinical symptoms, esophagogastroduodenoscopy, and barium meal; primary treatment was considered as patients had not received dilation therapy before; patients with severe cardiopulmonary disease or blood coagulation disorders were excluded from the study; malignant stricture was excluded by histological examination. Five consecutive patients were enrolled between April, 2018 and January, 2019.

All patients underwent EISC with a 9.8-mm-diameter endoscope (GIF-Q240; Olympus Optical Co, Ltd., Tokyo, Japan), while in the left lateral decubitus position and under intravenous sedation with midazolam and/or propofol. Upper-GI radiography was then carried out before intervention to measure the length of the anastomotic stricture. To manage the anastomotic stricture securely, the tip of a transparent hood, which was attached to the endoscope, was positioned under direct visualization just proximal to the stricture. The insulated-tip knife (IT-knife) (Olympus) was introduced through the working channel. Under direct vision through a transparent hood and the findings of endoscopic ultrasonography (EUS) to ensure the safety margin, radial incisions parallel to the longitude of the esophagus were carefully performed by pulling up the IT-knife (Figure 1). Four to 6 radial incision sites were performed and two incisions were performed at each cutting site and the scar tissue between the two incisions was removed; however, the tissue located at 3 and 9 o’clock between the adjacent sites was retained (Figure 2). Sufficient depth was defined as the involvement of the muscularis propria and/or the presence of the bottom of the incision along the virtual line. After the procedure, the wound surface of the stricture site was closely observed for any occurrence of hemorrhage and perforation. The procedure was terminated when the endoscope could easily pass the stricture without pressure. An electrosurgical unit (VIO-200 generator; ERBE, Germany) was used, with a pure-cutting current at a power output setting of 40 W/s.

Figure 1 The procedure of EISC. (A) Endoscopic view of benign anastomotic esophageal stricture before incisional therapy; (B) on incisional therapy, showing that the positioning of the IT knife and radial incision parallel to the longitude of the esophagus is carefully performed by pulling up the IT knife; (C) eight radial incisions were performed and the scar tissue were sliced off with the 3 and 9 o’clock round retained; (D) esophageal anastomosis 6 month after EISC. EISC, endoscopic incision and selective cutting; IT knife, insulated-tip knife.

Patients fasted on the day of the operation. On day 2, they started a semi-liquid diet and on day 3 commenced a soft diet for 7 days. Intravenous proton pump inhibitor (PPI) and antibiotics were prophylactically used for 3 days. Patients who received EISC scheduled for a follow-up visit at 1, 3, 6, and 12 months by telephone and then semi-annually esophagogastroduodenoscopy to observe the healing of the wound and check for any sign of stricture recurrence.

Evaluation of dysphagia before and after EISC

Statistical analysis was performed using SPSS 17.0. Continuous variables were expressed as mean value and ranges and analyzed by the Wilcoxon test. A P value of <0.05 was considered statistically significant.

Of the 5 patients, all male, ages 54 to 66 years. The distance from incisors ranged from 20–27 cm (mean: 23.2 cm). The stricture was central in 1 case and eccentric in 4 cases, with the stenosis ranging in length from 0.8–1 cm (mean: 0.96 cm). EISC was performed successfully in all of the patients. The average operation time was 42.8 minutes (range, 30–55 minutes). Endoscopic ultrasonography was performed 2–3 times (mean: 2.4 times). Detailed clinical data were presented in Table 1.

The average diameter of stricture was enlarged from 1.8 (range, 1–3 mm) to 15.6 mm (range, 14–18 mm) (P<0.05). During the at least 12 months follow-up, the anastomosis was smooth and the stricture had not recurred after semi-annual endoscopic re-examination. Diameters of the luminal patency rebounded a little compared with intraoperative incisional diameters (Table 2). No relevant complications were reported but only case 3 had mild chest pain after EISC and disappeared next day without analgesic therapy. The dysphagia score decreased from 3 or 4 to 0 or 1 and symptoms of dysphagia were remarkably improved in all patients after EISC (Table 3). 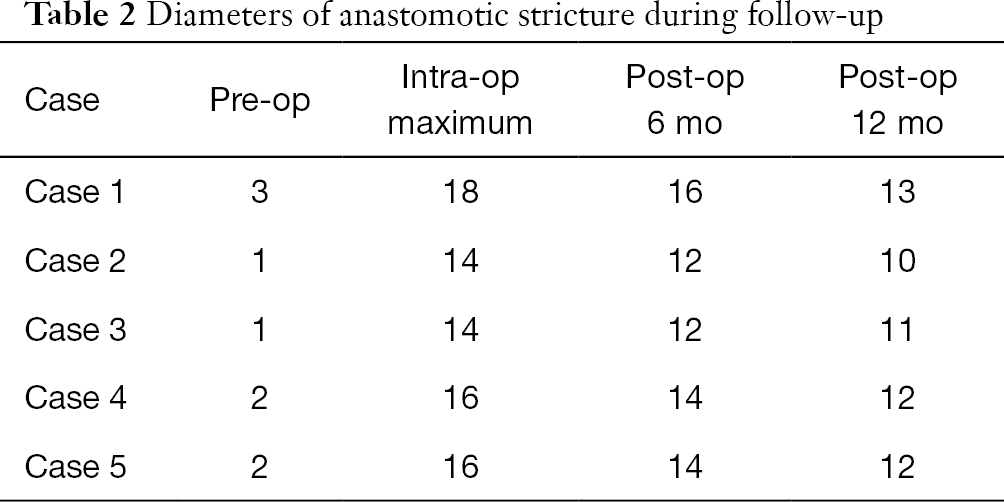 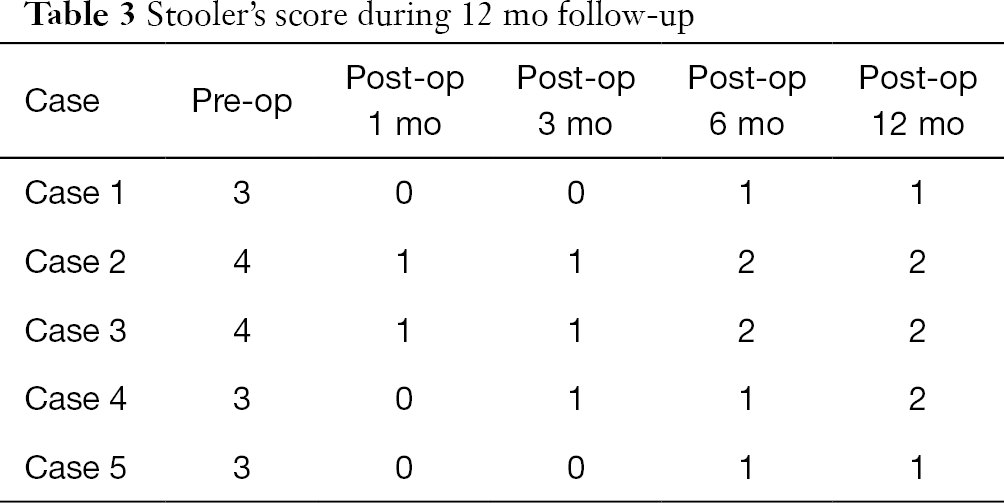 Esophageal anastomotic strictures, with an incidence of 5–46% as most frequently encountered by patients who receive esophageal cancer surgery, can be managed successfully with EBD or rigid dilation (1-5). However, for patients who missed the opportunity for EBD until intolerant dysphagia happened, the switch of treatment strategy for strictures without previous treatment from continued dilation to endoscopic incision was deemed necessary. Traditionally the benign anastomotic strictures were incised radially and scar tissue between adjacent incisions were sliced off, which leads to a wound surface like circumferential ESD, facilitating the formation of postoperative stricture. We conducted EISC and reported our successful experience of EISC as primary treatment for benign anastomotic stricture.

Radial incisions were performed by pulling up the IT-knife under direct vision and the scar tissue between the two incisions was removed and the tissue located 3 and 9 o’clock around was retained. This modification could avoid the formation of circumferential surface, prevent the reformulation of stenotic ring, and reduce the risk of recurrence. All the patients underwent the procedure successfully with the operation time of 42.8 min (range, 30–55 min). Compared with the results of a prospective single-arm study by Lee et al. (7) successfully completed within 10 minutes, we applied EUS intraoperatively to detect scar tissue hyperplasia and vessels, which helps to guide the direction of incision, ensured the safety margin, reduced unintentional injury during incision and concurrently needed more time.

All 5 patients were observed for at least 12 months without restricture occurred after EISC over the periodical follow-up but a little rebound compared with intraoperative incisional diameters. No procedure-related immediate or delayed complications (significant bleeding or perforation) after EISC occurred but only case 3 had mild chest pain after EISC and disappeared without analgesic therapy next day. The low complication rate appears to be comparable with other modalities of therapy not owing to 5 patients only but the EUS application and skilled operator under direct vision monitoring. However, a limited number of patients were included in this study and EISC highly depends on the experience and skill of the operator.

In conclusion, our study showed that EISC as primary treatment is feasible, safe and could serve as an effective method for benign esophageal anastomotic stricture. Large comparative studies are warranted to further confirm our findings.

Reporting Checklist: The authors have completed the STROBE reporting checklist. Available at http://dx.doi.org/10.21037/apm-20-1090

Conflicts of Interest: All authors have completed the ICMJE uniform disclosure form (available at http://dx.doi.org/10.21037/apm-20-1090). The authors have no conflicts of interest to declare.

Ethical Statement: The authors are accountable for all aspects of the work in ensuring that questions related to the accuracy or integrity of any part of the work are appropriately investigated and resolved. All procedures performed in this study were in accordance with the Declaration of Helsinki. This study was approved by the Ethics Review Committee of the Second Hospital of Jilin University (No. 2020-43). Signed informed consent was obtained from each patient.