Enterobacter cloacae are intrinsically resistant to ampicillin, amoxicillin-clavulanate, and first- and second-generation cephalosporins because producing chromosome mediated AmpC β-lactamase (1). In the case of low host immunity, dysbacteriosis, or other similar cases, respiratory, bloodstream, and surgical site infections are usually caused (2). The outbreak and spread of Enterobacter cloacae has been widely reported around the world (3), and even worse, because improper use of antibiotics, the spread of drug-resistant bacteria through various resources of the health care system, lack of appropriate guidelines for the use of antimicrobial agents, the resistance situation has gradually deteriorated. It has become a significant threat to global public health (4). The primary factors leading to β-lactam antimicrobials resistance of Enterobacter cloacae may be plasmid-mediated AmpC β-lactamases (pAmpC), plasmid-coded CTX-M family extended-spectrum β-lactamases, KPC family carbapenemases, and VIM, IMP and NDM-1 metallo-β-lactamases (5). In recent years, with the widespread use of Carbapenem antibiotics, the prevalence and spread of carbapenem-resistant Enterobacteriaceae (CRE) has become a global trend.

We conducted a retrospective study to evaluate the clinical distribution and antibiotic resistance of clinical Enterobacter cloacae isolates and the molecular analyses of CREL to promote the rational use of clinical antibiotics and to demonstrate the resistance mechanism of CREL in Eastern Heilongjiang Province, China.

The retrospective study was conducted at the First Affiliated Hospital of Jiamusi University with 1,800 beds in Eastern Heilongjiang Province, China. Three hundred forty-two strains of Enterobacter cloacae were collected from January 2014 to December 2018, all isolates were found at the species level, and routine antibiotic susceptibility tests were performed by the VITEK2 compact automated system. Unfortunately, we have been preserving CREL isolates regularly since 2016, so the earlier isolates were not preserved. Seven strains of CREL were collected from September 2016 to December 2018, and 3 added strains were collected in 2019. All of them were stored in a −80 °C refrigerator for further analysis.

The antimicrobial susceptibility of all isolates was evaluated by the VITEK2 Compact automatic system AST GN card (bioMérieux, France), supplemented by a disk diffusion method. As CREL were considered only those isolates that were confirmed as carbapenems-nonsusceptible (either of ertapenem, imipenem or meropenem) according to Clinical and Laboratory Standard Institutes (CLSI-2016) criteria. E. coli ATCC 25922 was used as the control for antimicrobial susceptibility testing.

DNA was extracted from the bacteria using the boiling method. Polymerase chain reaction (PCR) and nucleotide sequencing techniques were performed in 10 CREL strains to confirm the existence of carbapenemase genes blaKPC, blaNDM, blaVIM-1, blaVIM-2, blaIMP-4, blaIMP-8, blaOXA-1, blaOXA- 23, blaOXA-24, blaOXA-48, blaOXA-51, blaOXA-58, and ESBL genes, including blaCTX, blaTEM, blaACC, and blaSHV, using primers as previously described and listed at Table 1 (6). According to the size of the target fragment, positive amplification products were sequenced, and the sequencing results were compared against the BLAST tool.

The SPSS 25.0 software was conducted using the Chi-square test for statistical analysis. P<0.05 was statistically significant.

From January 2014 to December 2018, a total of 342 non-repetitive Enterobacter cloacae were detected. The most common specimens were sputum (202/342, 59%), followed by secretion (41/342, 12%), blood (39/342, 11.4%). The most common clinical departments were respiratory, followed by neurosurgery, emergency ICU, orthopedics, and emergency department (Table 2). CREL information was shown in Tables 3 and 4. The trends of resistance rate of Enterobacter cloacae were shown in Figure 1. 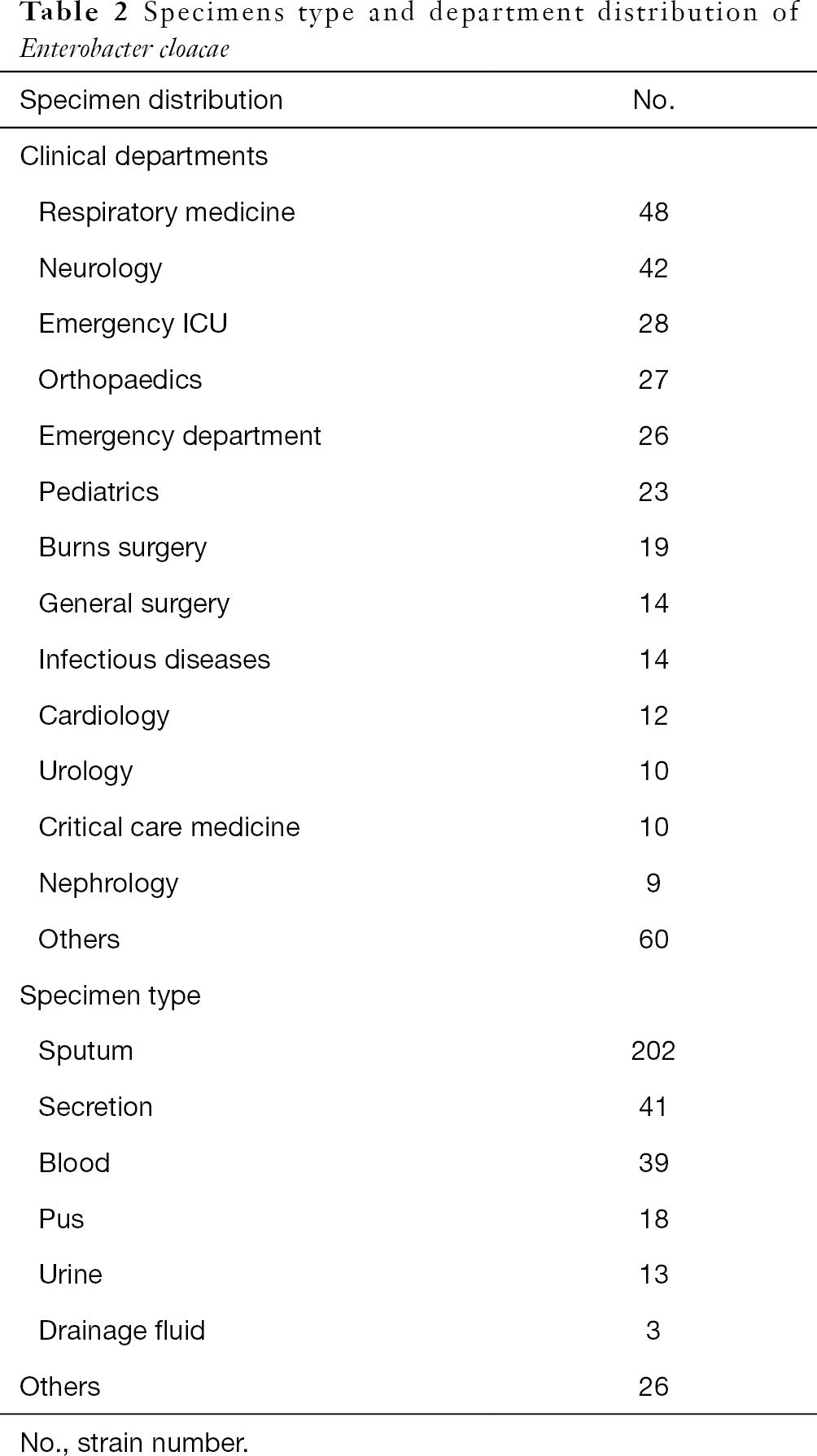 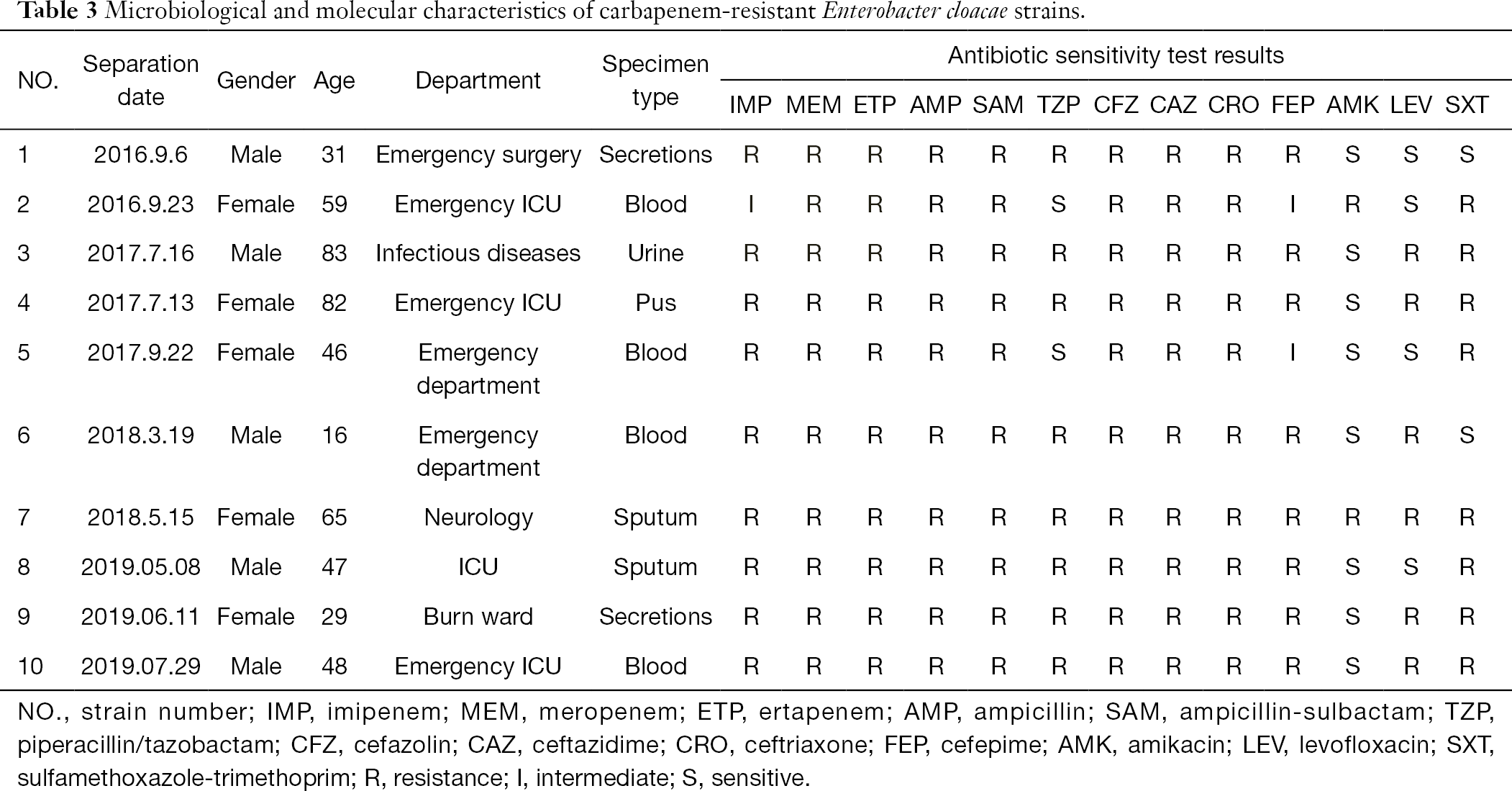 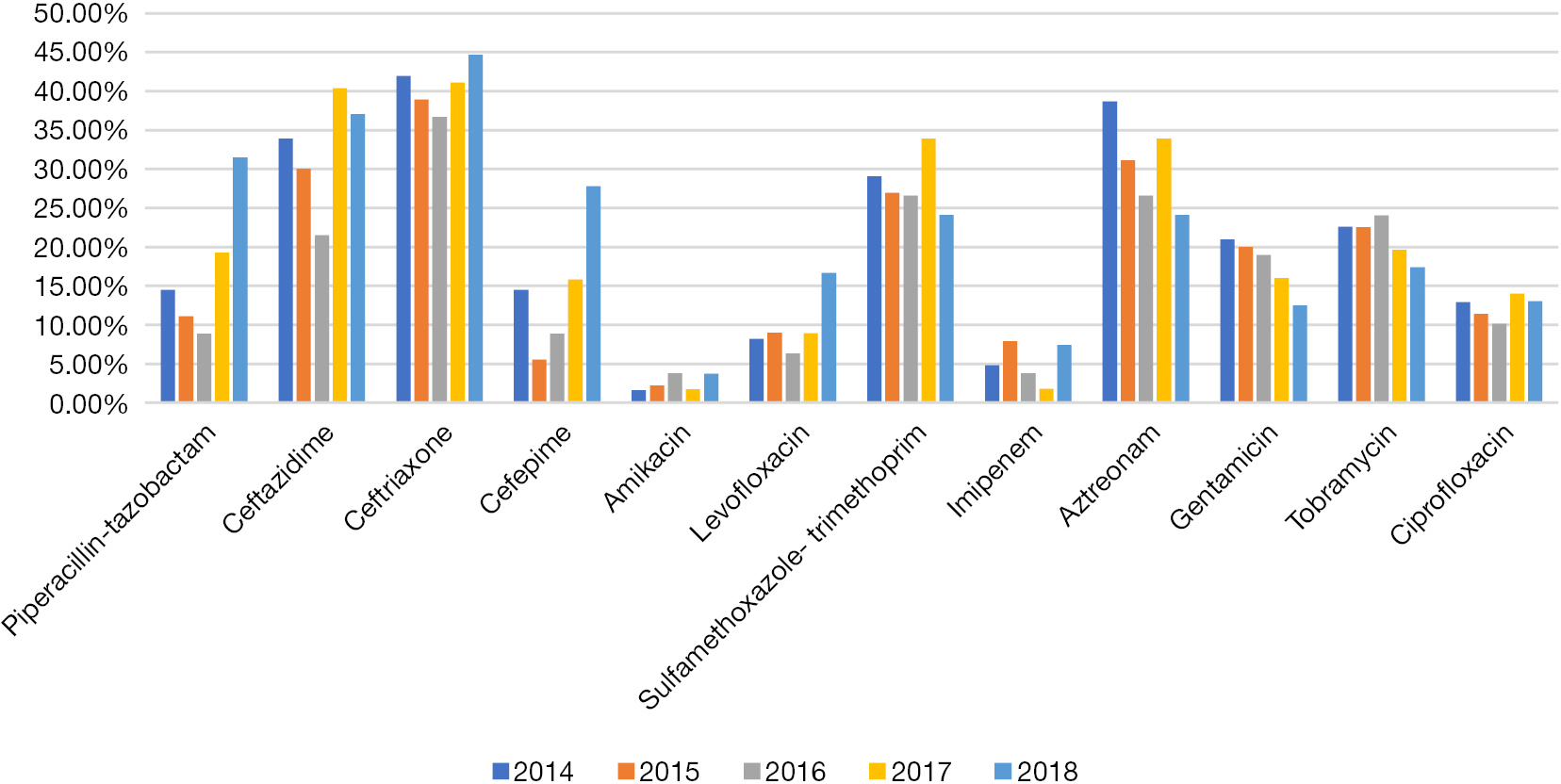 Figure 1 The trends of the resistance rate of Enterobacter cloacae. 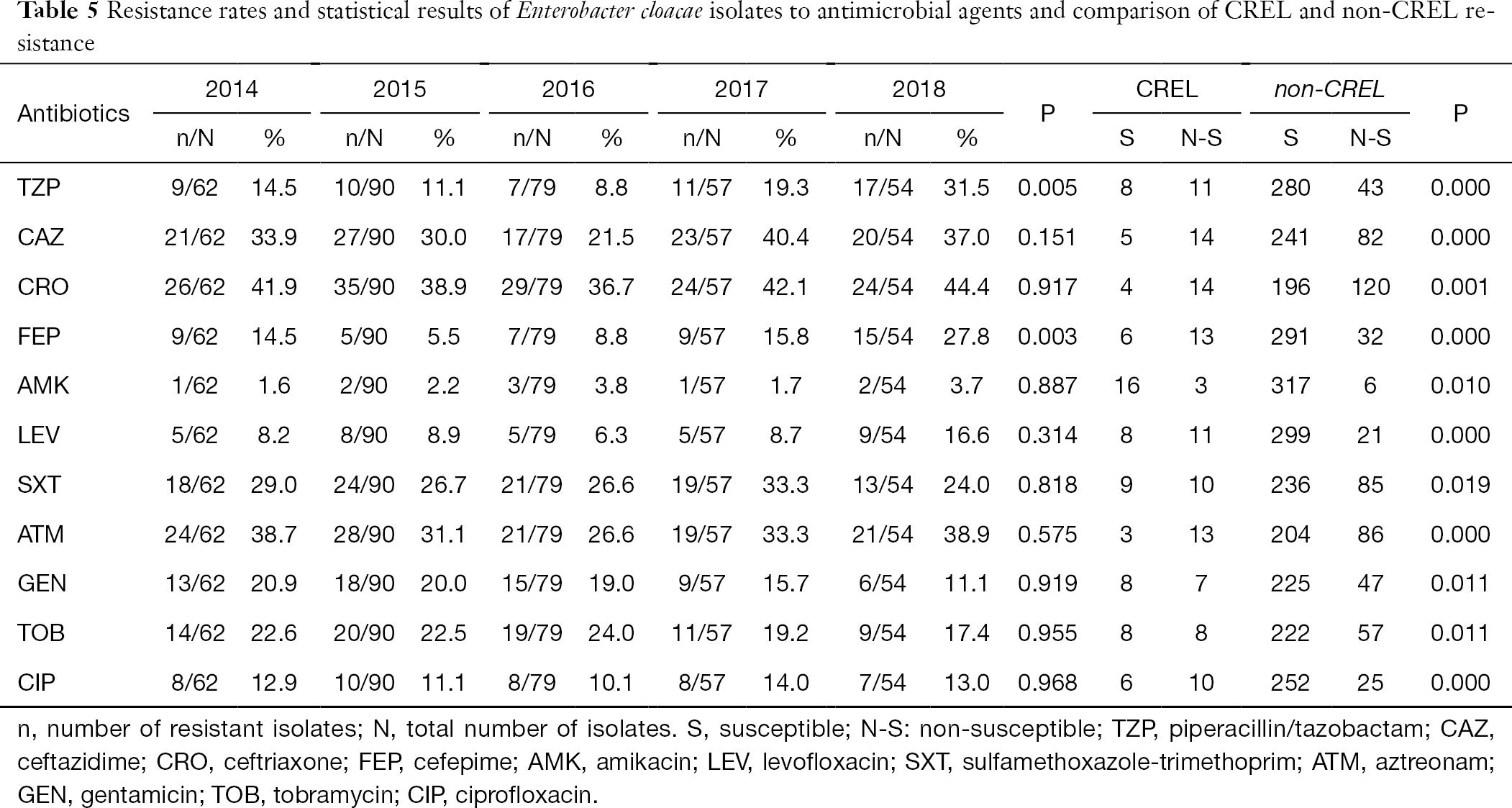 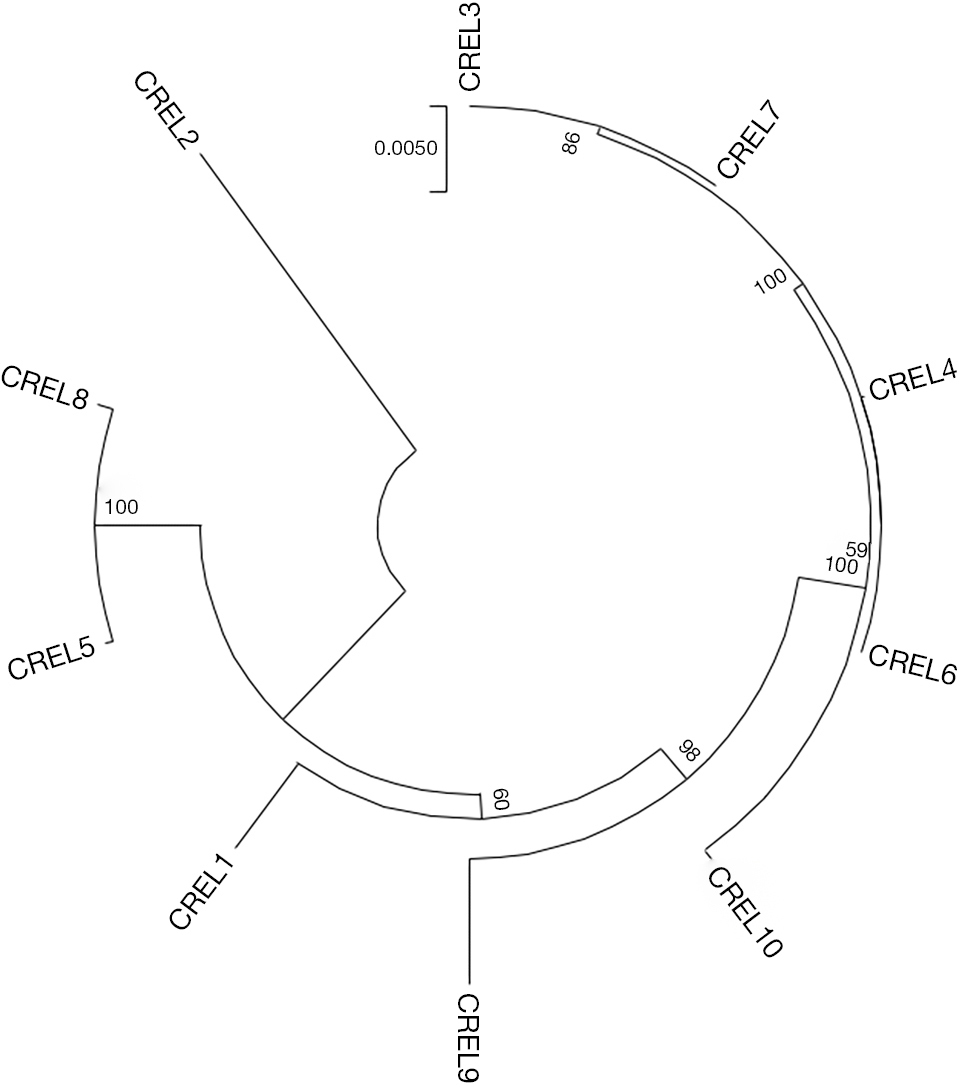 Enterobacter cloacae is an important opportunistic pathogen and frequently implicated in nosocomial infections (7). The carrying of drug-resistant genes also leads to the multidrug-resistance and limiting therapeutic options even further (8). Our study showed that most of the isolates remained susceptible to tested antibiotics; however, CREL holds a significantly higher resistance rate compared with non-CREL. The drug resistance rate of Cefepime has been increasing in recent years, from 5.5% in 2015 to 27.8% in 2018. Previous research has reported that the combination of different resistance mechanisms, such as porin loss (primarily OmpC), expression of blaOXA-1, and/or TEM-1, could confer decreased susceptibility to Cefepime (9-11). Cefepime resistance has been described in Pseudomonas aeruginosa and E.col strains producing OXA-1 beta-lactamase (12,13). In our study, 6 of 10 strains carrying the blaOXA-1 gene, which may be one of the reasons for the increased resistance rate of Cefepime in recent years. However, we only investigated CREL strains, the carrying rate of the blaOXA-1 gene in non-CREL strains, and other mechanisms that need further exploration.

Carbapenemase spread has been increasingly reported worldwide over the last decade (14). VIM-1 was most common in Spain and other southern European countries (15), in the current study, no producers of VIM-1 were found. A previous multicenter study conducted a molecular epidemiological survey of carbapenem-resistant Enterobacter cloacae (CREL) in 11 cities in China to understand the prevalence of the bacteria further. E. cloacae prevalent in China produced NDM-1 and IMP-4. NDM-1 was found in the highest proportion and may represent a significant drug-resistant mechanism of carbapenem-producing Enterobacteriaceae in China (1). In the present study, a higher proportion (4/10, 40%) of blaIMP-4 positive strains were identified among carbapenem-resistant E. cloacae isolates showing that IMP-4 was the dominant carbapenemase instead of NDM-1 in this region. Australia has observed the dominance of IMP-4-producing Enterobacter cloacae, which agreed with the current study (16). It is worth noting that one strain of this study co-producing NDM-1 and IMP-4. One CREL strain was previously reported to co-producing NDM-1 and IMP-8 in Chongqing, China (17). NDM and IMP types belong to class B metallo-lactamases (MBLs) in the Ambler classification and disseminated among bacteria internationally (18). Considering that one strain co-producing NDM-1 and IMP-4 may confer multiple resistance to antibiotics that further reduce the therapeutic choices, surveillance for carbapenemase detection, and infection control measures should be implemented to prevent their further spread. The OXA-48 carbapenemase was first discovered in various Enterobacteriaceae species isolated in Turkey and other countries in the Middle East, also be reported in Enterobacter cloacae (19). It belongs to the D-class carbapenemase of Ambler classification, which has a weak role in the hydrolysis of carbapenems. OXA-48 was not detected in our study, showing that it is not prevalent in our region. TEM and SHV was the dominant ESBL type in our study, unlike CTX-M-producers most frequent in Latin American countries (20).

In conclusion, our study investigated antibiotic susceptibility and molecular analyses of clinical Enterobacter cloacae isolated in Eastern Heilongjiang Province, China. The results showed that antimicrobial resistance was low among them. Compared with non-CREL, the resistance rate of CREL strains was significantly higher. ST93, ST1120, ST256 has high homology showing that CREL in our area has potential spread risk. The NDM-1-possessing ST1120 isolates, KPC-producing ST93 strains, and IMP-4-producing strains in our region should be taken with serious concern s and still need to be further monitored.

There are some limitations in this study: (I) we did not determine the exact mechanism of how each E. cloacae acquired the carbapenemase. Further studies are necessary to determine the exact mechanisms by which E. cloacae acquired the carbapenemase. (II) The number of CREL collected was limited, and we only investigated one hospital, so our conclusion may not be comprehensive enough or extended directly to the whole region.

Conflicts of Interest: All authors have completed the ICMJE uniform disclosure form (available at http://dx.doi.org/10.21037/apm-20-1089). The authors report grants from Excellent Team of Young Teachers Foundation of Heilongjiang Province, grants from Research Project of Yongchuan Hospital Affiliated to Chongqing Medical University, during the conduct of the study.