Sepsis, which is defined as organ dysfunction caused by the body’s response to infection, manifests as a series of clinical symptoms. Because of the complex pathogenic mechanisms and frequent involvement of multiple organs in sepsis (1), many different factors can influence its prognosis. There were many different factors can influence septic prognosis. Such as, host-related: Anomalies in the host's inflammatory response may indicate increased susceptibility to severe disease and mortality. As examples, the failure to develop a fever (or hypothermia) and the development of leukopenia, thrombocytopenia, hyperchloremia, a patient’s comorbidities, age, hyperglycemia, hypocoagulability, and failure of procalcitonin to fall have all been associated with poor outcomes (2-7). Site of infection: The site of infection in patients with sepsis may be an important determinant of outcome, with sepsis from a urinary tract infection generally being associated with the lowest mortality rates (8). A number of scoring systems have been devised to assist with predicting the prognosis of patients with sepsis (9). The Sequential Organ Failure Assessment (SOFA), a scoring tool to assess organ function, was introduced for the diagnosis of sepsis (10). In 2016, new guidelines on sepsis and septic shock recommended the Quick SOFA (qSOFA), a simplified version of SOFA, as an auxiliary tool for the swift identification of sepsis in high-risk patients (11). Since 1996, the Logistic Organ Dysfunction System (LODS), an organ dysfunction scoring system proposed by Le Gall et al. has also been used to assess organ function in critically ill patients (12). SOFA score and qSOFA score are the scoring indexes proposed by sepsis-3 to assist in the diagnosis of sepsis, which have a good correlation with the prognosis of sepsis. LODS scores vary according to organ failure. Raith found that Among adults with suspected infection admitted to an ICU, an increase in SOFA score of 2 or more had greater prognostic accuracy for in-hospital mortality than SIRS criteria or the qSOFA score (13). We use the LODS scoring system, the LODS scoring system is less, and the studies related to the 28- and 90-day prognosis of sepsis are even less in our study. And the study of 28- and 90-day mortality is also the main evaluation index for many sepsis choices. In our study, data from the Medical Information Mart for Intensive Care III (MIMIC-III) database was analyzed, and the values of qSOFA, SOFA, and LODS for predicting the prognosis of septic patients were compared.

All data used in the current analysis were retrieved from the Medical Information Mart for Intensive Care III (MIMIC-III) database (14). MIMIC-III is a publicly available database developed by the MIT Lab for Computational Physiology, which contains the information of inpatients in the Beth Israel Deaconess Medical Center. To date, the database has provided the foundation of many studies (15-17).

The files were downloaded from the MIMIC-III database after permission had been obtained from Physionet. They were then installed and imported into the PostGres 12.0 software. For data retrieval and extraction, a connection was established with the Structured Query Language (SQL) using the Navicat Premium 15.08 software, and the results were imported into a data sheet for analysis. We present the following article in accordance with the STROBE reporting checklist (available at http://dx.doi.org/10.21037/apm-20-984).

The cases included in this analysis were from a retrospective cohort of MIMIC-III patients. All the included cases were patients who met the diagnostic criteria of sepsis and had not been admitted to intensive care unit (ICU) before. The eligible patients met the SEPSIS-3 definition of septic shock and had clinical infections and organ failure, with a SOFA score of ≥2 points. Patients who met any of the following criteria were excluded from the analysis: (I) aged <18 years or ≥90 years; (II) pregnant or breastfeeding women; (III) patients with hematological diseases such as tumors or lymphomas; and (IV) patients with acute myocardial infarction.

The normality of measurement was tested by Levene’s test. The normally distributed data are expressed as mean ± standard deviation (), while non-normally distributed data are presented as median and quantiles [M (QL, QU)]. Student’s t-test was used to analyze normally distributed data with equal variances (α=0.10), and the Wilcoxon-Mann-Whitney test was used to analyze non-normally distributed and heterogeneous data. The count data were analyzed by using Pearson’s χ2 test with Yates’s continuity correction or by using Fisher’s exact test. EM Algorithm (expectation-maximization) was applied to estimate the missing data. The relationship between the relevant indicators and mortality was evaluated by binary logistic regression analysis. Receiver operating characteristic (ROC) curves were drawn for different indicators, and the areas under the ROC curves (AUC) of these scoring systems were compared. An indicator was regarded to have diagnostic value if its AUC was >0.5 and the difference was statistically significant when compared with 0.5. Comparisons between the AUCs were performed by employing the method described by DeLong et al. [1988] and completed in the MedClac 19.1.3 software package. The other statistical analyses were carried out in the SPSS 17.0 software package, and a P value <0.05 was considered to be statistically significant.

Based on the prognoses on days 28 and 90, the ROC curves were created for the SOFA score, qSOFA score, and LODS score, and the AUCs were compared. As shown in Figures 1,2, and Table 2, each of the three scoring systems held clinical value for predicting the 28- and 90-day mortality rates of patients with sepsis. When used to predict the 28-day mortality rate in septic patients, the AUC value of the qSOFA score was statistically different compared with those of the SOFA and LODS scores (P<0.001) (Table 3). Meanwhile, the AUC was not significantly different between the SOFA score and LODS score (P=0.306). The AUCs of the SOFA, qSOFA, and LODS scores were compared, revealing significant difference when these scoring systems were used to predict the 90-day mortality rate in septic patients (P<0.001). 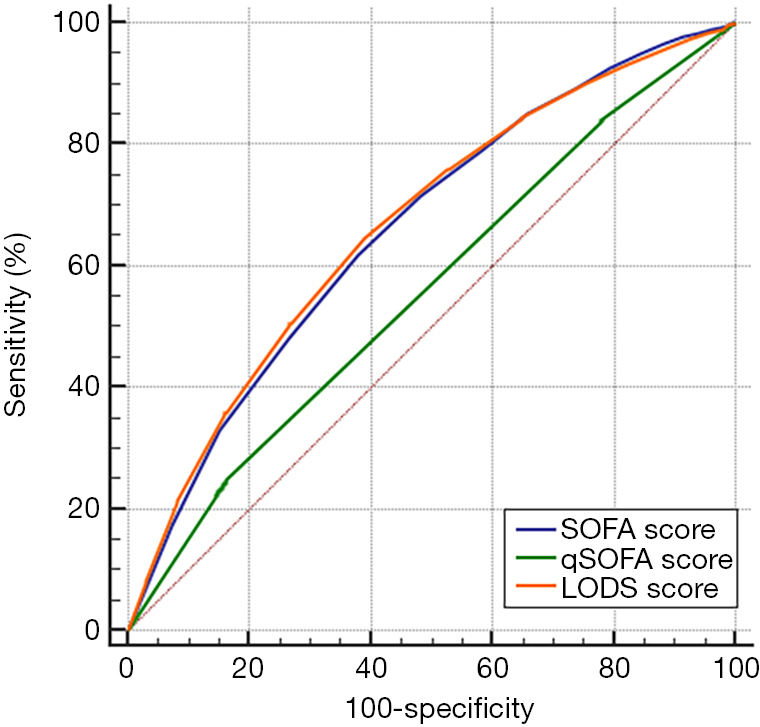 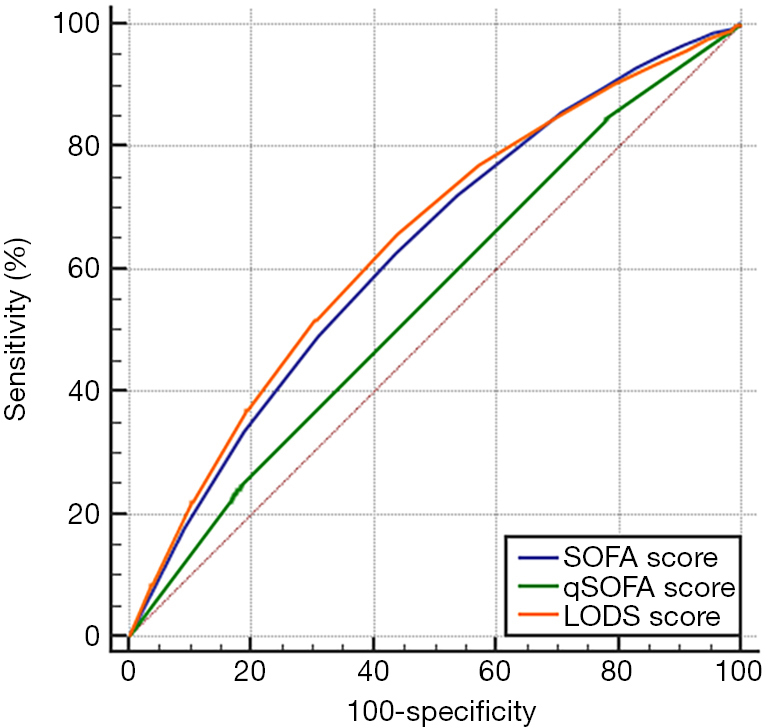 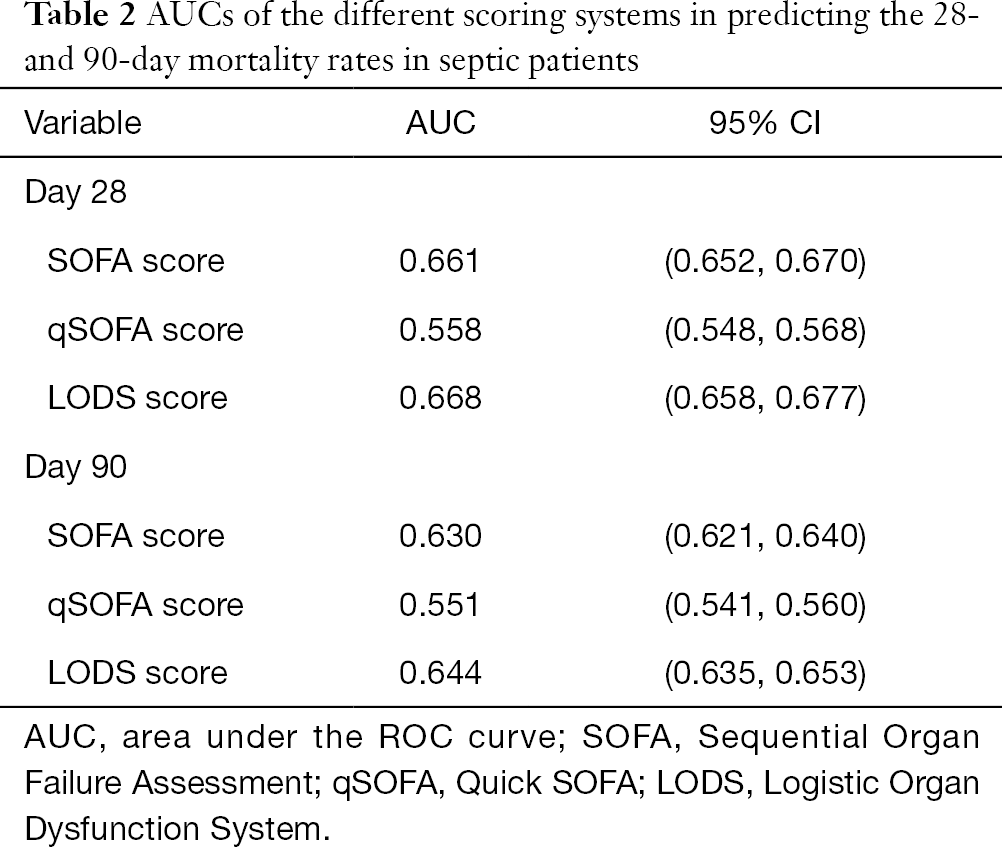 Correlations of SOFA, qSOFA, and LODS scores with the prognosis of septic patients

Initially, the SOFA score (Table 4) was designed to sequentially assess the severity of organ dysfunction in critically ill sepsis patients and was validated in 1,449 patients from 40 ICUs across 16 countries (18). Since critically ill patients commonly suffer dysfunction in multiple organs, SOFA has also been used to predict the mortality rate of patients who experience organ failure attributed to other causes including acetaminophen-induced acute liver failure, chronic liver failure, and cancer, as well as to predict the mortality rate of patients who have undergone heart surgery or hematopoietic stem cell transplantation (19,20). The use of SOFA score as a facilitative tool in identifying the risk of death in septic patients has been recommended by both the Society of Critical Care Medicine (SCCM) and the European Society of Intensive Care Medicine (ESICM) (10,11,21). In our current study, SOFA score was also observed to be a valuable tool for predicting the prognosis of septic patients.

The LODS score (Table 6) is used to assess the severity of organ dysfunction, weighing mostly on nervous, cardiovascular, and renal dysfunction, followed by pulmonary and vascular dysfunction, with liver dysfunction being the least weighed (12). SOFA score corresponds to the same worst score for each organ, while LODS distinguishes this condition. For example, the highest score of nervous system, heart and kidney is 5, while the worst score of lung function is 3, and that of liver insufficiency is only 1. This can better distinguish the correlation between the severity of the disease and different organ failure. In the current study, LODS could be applied to predict the prognosis of septic patients, with a higher LODS score indicative of worse prognosis. 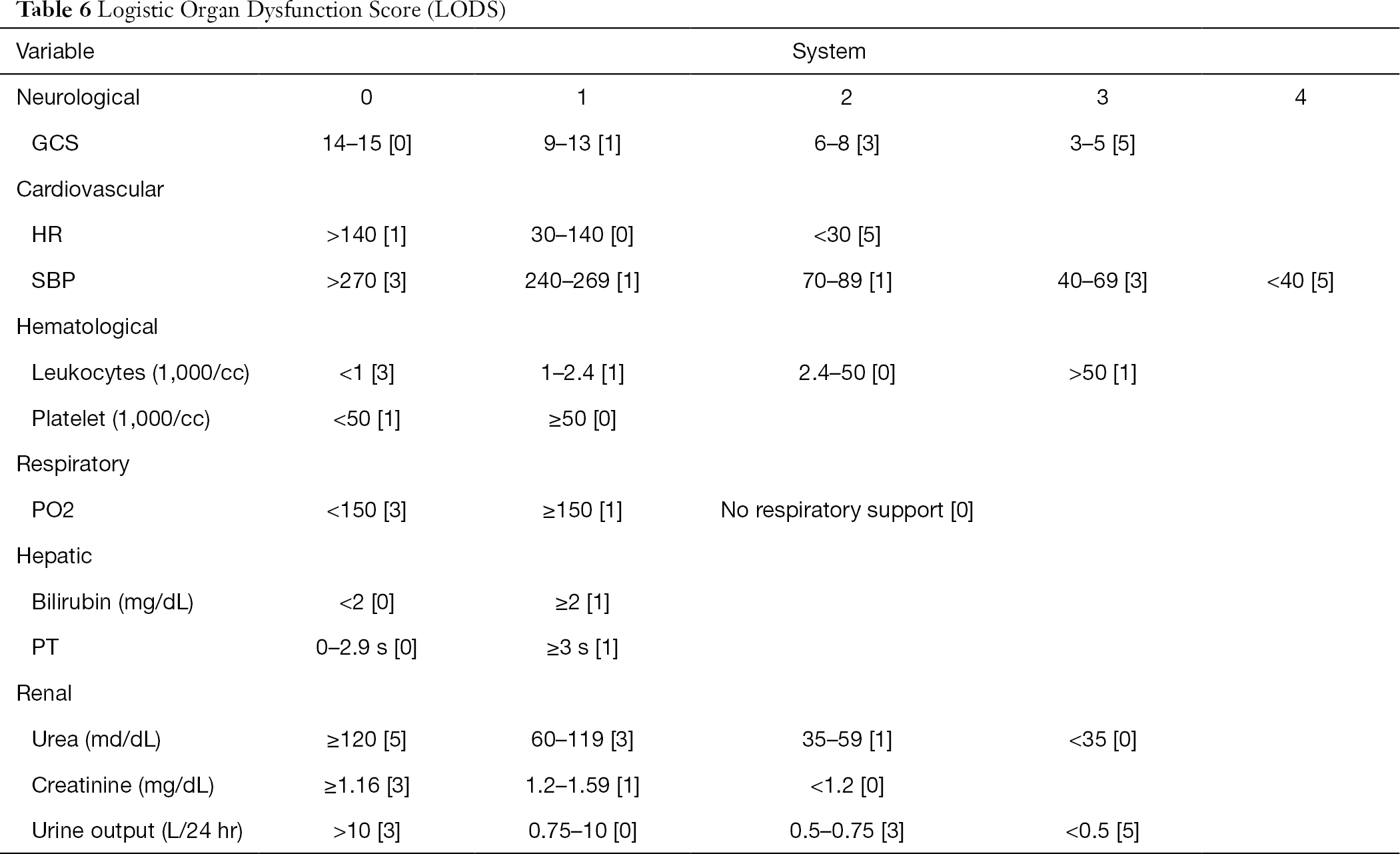 In our current study, the SOFA, qSOFA, and LODS scores were used to analyze the 28- and 90-day mortality rates of patients with sepsis. In the 28-day groups, the AUCs of the SOFA score and LODS score were significantly larger than that of the qSOFA score, and the AUCs of the SOFA and LODS scores were similar in value. Therefore, the sensitivity and specificity of SOFA score and LODS score in predicting the 28-day prognosis of septic patients are higher than those of qSOFA score. In the 90-day groups, AUC-LODS was larger than AUC-SOFA, and AUC-SOFA was larger than AUC-qSOFA. With only three components—mental status, respiratory rate, and blood pressure—the qSOFA is relatively simple (11). However, for ICU patients with sepsis, the usefulness of qSOFA is limited, and it was shown to be inferior to the LODS score and SOFA score in predicting prognosis at 28 and 90 days. Nevertheless, the simplicity of qSOFA as a tool for the swift identification of sepsis makes it more suitable for an emergency setting. Although the AUC value of the LODS score was higher than that of the SOFA score in predicting 90-day prognosis for septic patients in our current study, LODS score is a more complicated tool, and its AUC value was only marginally higher than that of the SOFA score. Therefore, the SOFA score is currently the preferred tool in the SEPSIS-3 criteria.

Our study was limited by its retrospective design. For instance, data were missing in some cases and had to be filled by the EM algorithm. But, the missing rate of each item of data did not exceed 25% in our study. Moreover, the retrospective nature of this study may have created selection bias, which needs to be verified and corrected by future prospective studies.

SOFA score, qSOFA score, and LODS score can all be used to predict the prognosis of patients with sepsis. LODS score and SOFA score have higher accuracy than qSOFA score in predicting prognosis; however, qSOFA is a simpler tool, making it more suitable for use in emergency settings.

Reporting Checklist: The authors have completed the STROBE reporting checklist. Available at http://dx.doi.org/10.21037/apm-20-984

Conflicts of Interest: All authors have completed the ICMJE uniform disclosure form (available at http://dx.doi.org/10.21037/apm-20-984). The authors have no conflicts of interest to declare.